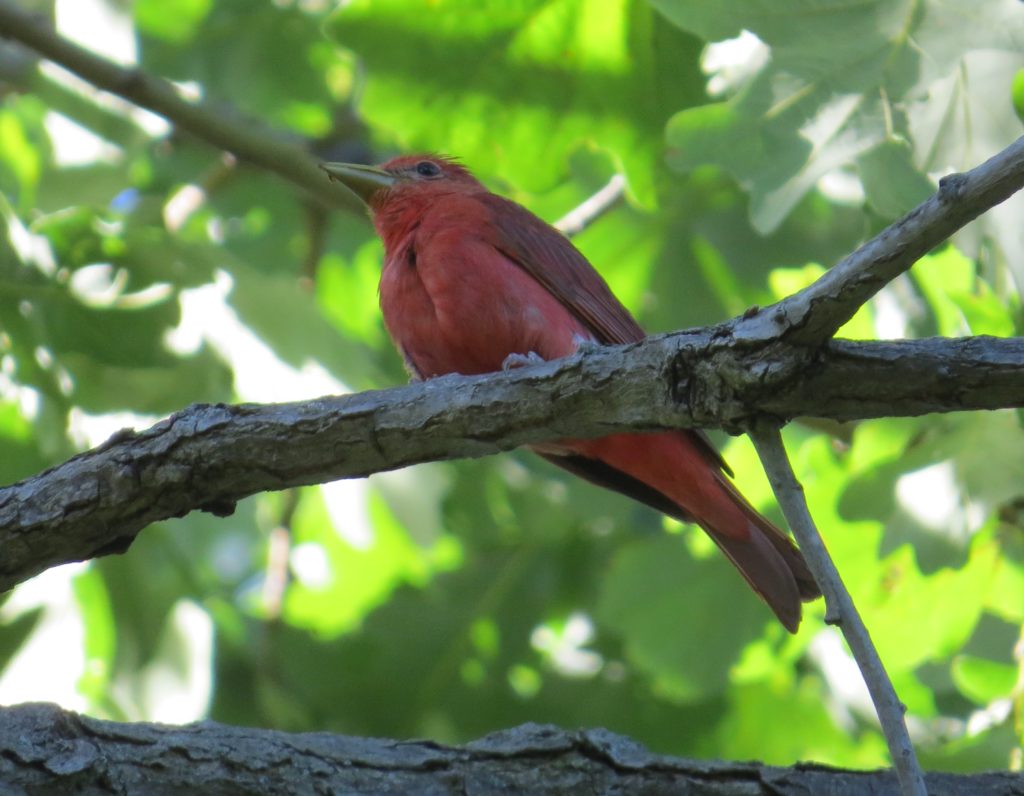 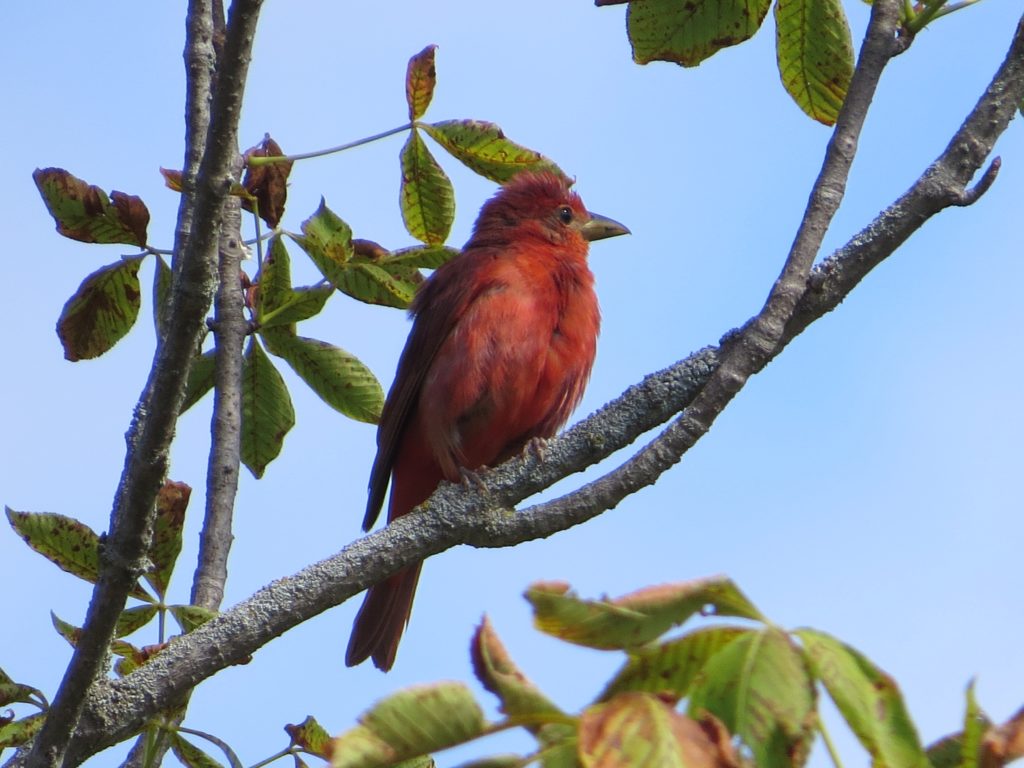 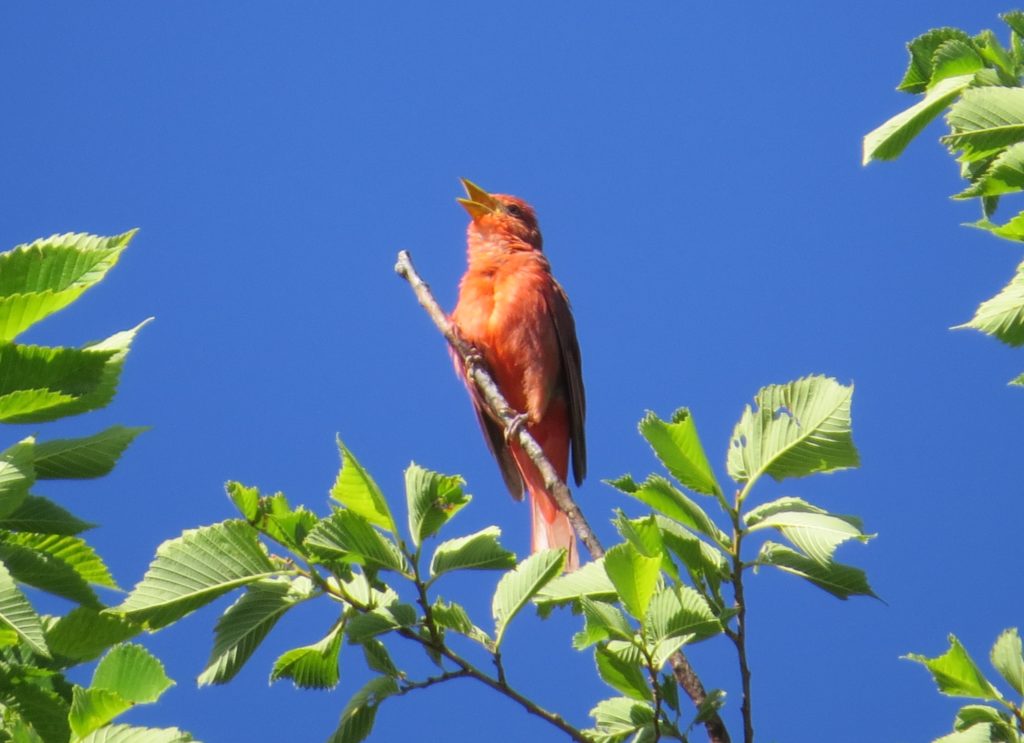 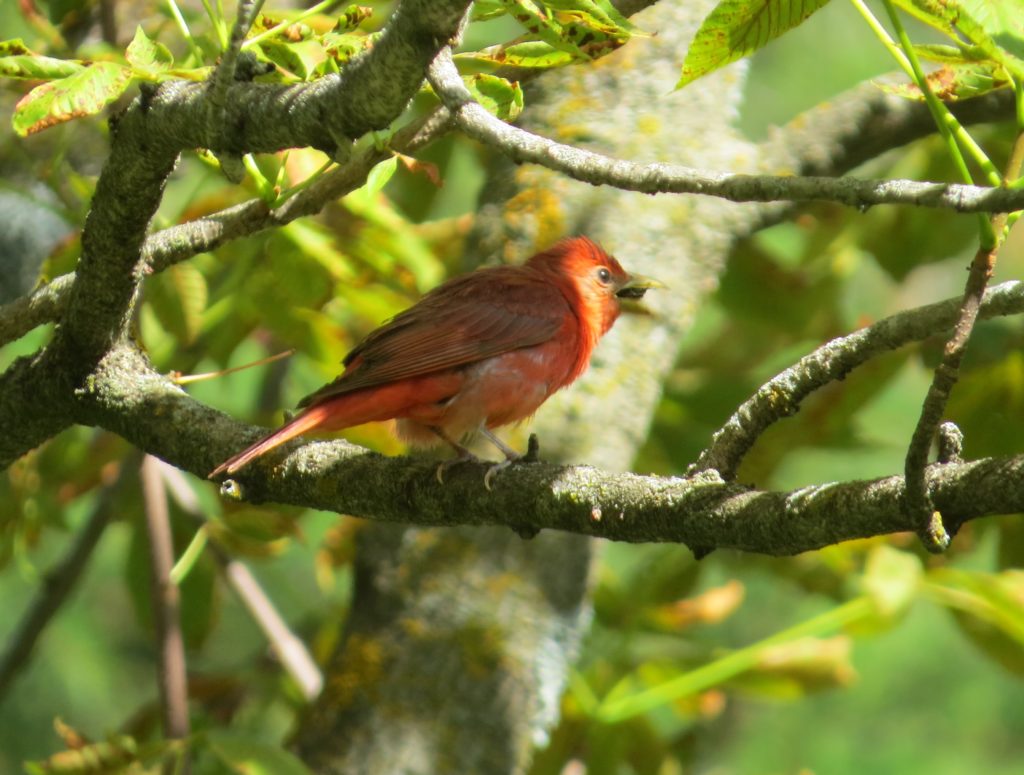 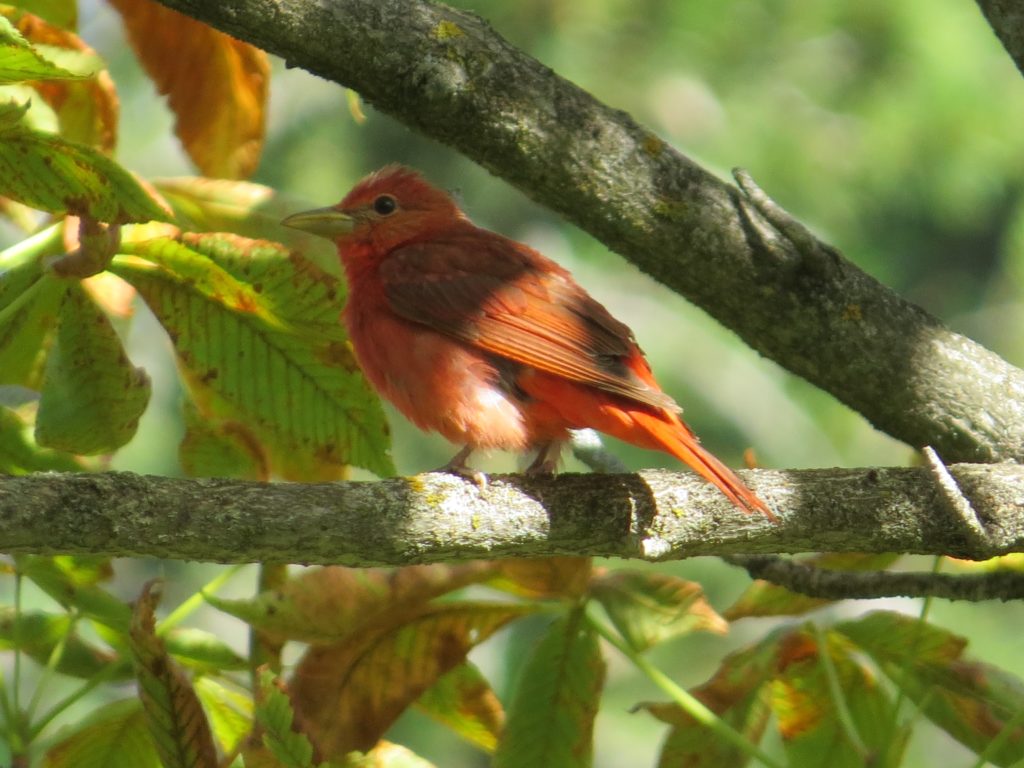 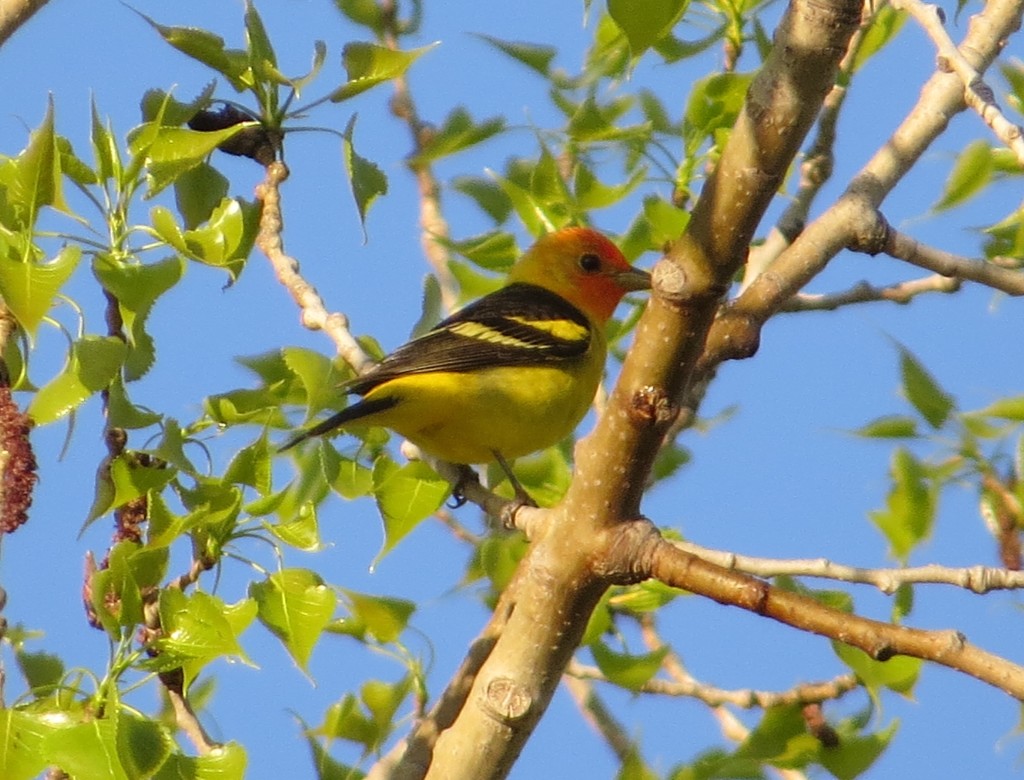 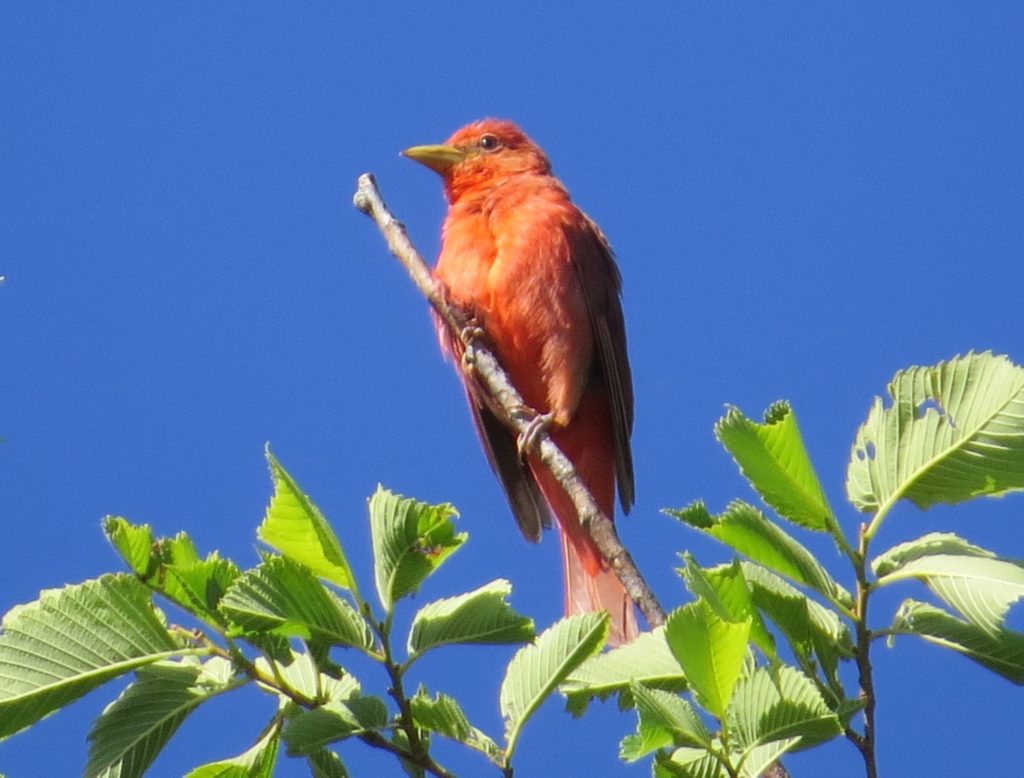 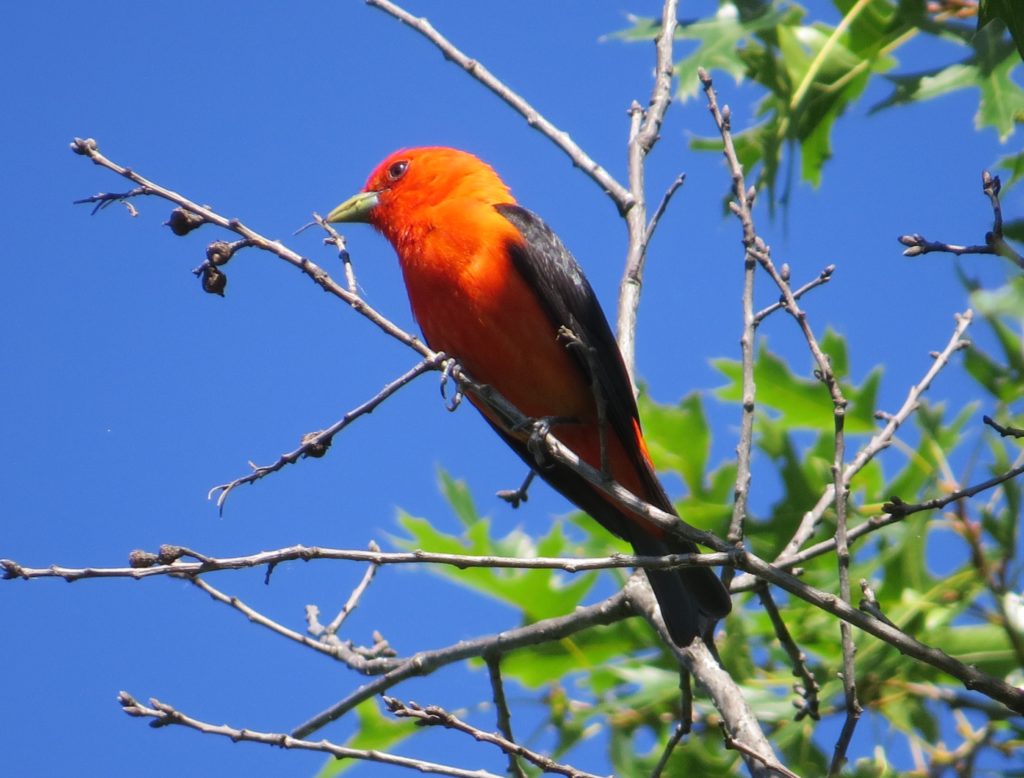 While the blog has kept a low profile of late, the birding has been raging on.  There have been life birds, year birds, owls, and even an Arizona birder currently staying in my home and beefing up his life list.  There are stories to recap of distant lands, fun people, and cool birds which will, eventually, all be told here in due time. But first I want to do a single species post as I have done from time to time.  Only the best and brightest get this honor on ABWCH, and the bird featured today has been so, so good to me this month. That bird is the Scarlet Tanager, a bird I just don’t get tired of seeing.  I have always yearned to get better and better looks and photos of this bird.

In the last two weeks I have had the pleasure of seeing/hearing not one, but four male Scarlet Tanagers.  The Scarlet is the only Minnesota Tanager that can be found reliably every year while the Summer and Western Tanagers are rare-regular, meaning only one or two of each show up in the state each year.  In a strange twist, I saw both of the rare Tanagers this year and got the most common Tanager last, thereby sealing up the Minnesota Tanager Trifecta (Do I get a special patch for that or something?).  And I have to tell you, the best was saved for last.

On the way home from a Memorial Day weekend Up North, the family and I drove through Mille Lacs Kathio State Park just to check it out.  As we drove down the road, a flash of red dropped onto the pavement right in front of the car.  I was shocked to see the breathtaking and unmistakable Scarlet Tanager.  The bird hopped up to a nearby branch out my window where it just sat giving jaw-dropping views to even the naked eye. I scrambled to dig out my camera. Once the camera was out, I hurriedly took a shot before an impatient motorist behind me passed me. The Tanager was gone, and besides a sinking feeling in my stomach, all I was left with was this: 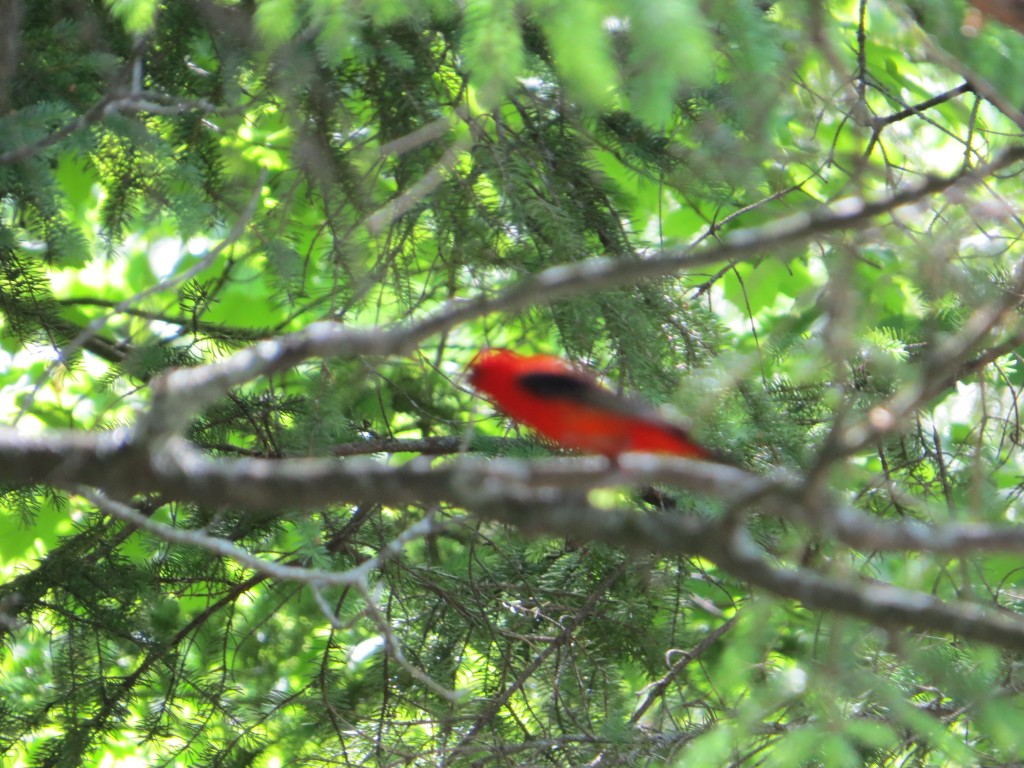 I expressed my frustration to the family, and I was gently corrected by my son when he said, “Don’t be frustrated, Dad.  You tried your best.” What a wise, sweet kid.  Evan was right.  Besides, I needed to look at the bright side–I saw this bird really, really well.  Photo redemption would have to come later…

It’s true–Tommy D is back in Minnesota for the third time in 2016! We are currently working on his life list and back at work on TOBY.  Tommy and I don’t waste any time.  After picking him up at the airport at 5 AM on Thursday, we made a beeline down to Sakatah Lake State Park to look for a reported Kentucky Warbler.  This would be a huge lifer for both of us and great way to begin Tommy’s trip.  Unfortunately we dipped on the Warbler, but {spoiler alert} I did have the great pleasure of finding and pointing out Tommy’s 500th life bird: 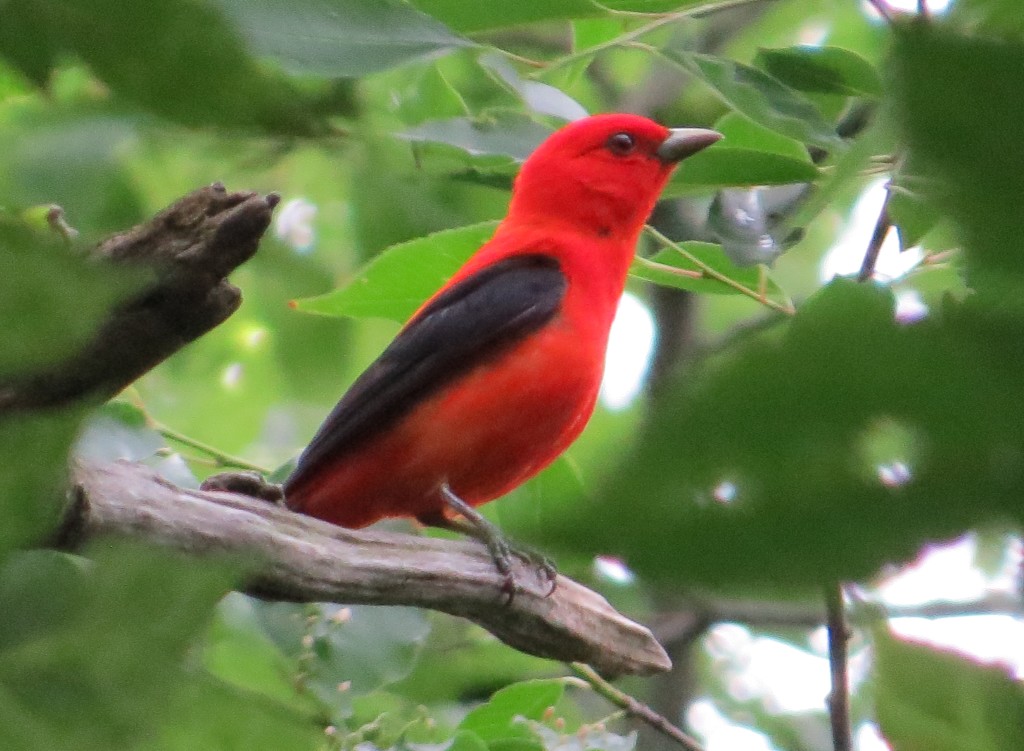 What a splashy bird for Tommy’s 500th! I wish I could say the same for {spoiler alert} my 400th. More on that later. And this photo felt good after the flop at Mille Lacs.  We also got to see a female Scarlet Tanager with this male.

Tommy and I heard a Scarlet Tanager join the chorus of some awesome life birds at Falls Creek Scientific and Natural Area.  More on those later.

This morning while keeping the birding local with Tommy, we birded the woodland habitat south of Lake Elizabeth.  The bird that stole the show was a male Scarlet Tanager that had returned to his same territory that he occupied last year.  Tommy detected him singing as we walked along the road.  I love its song which is a strep-throat rendition of a Robin’s song.  It did not take long to track him down. This was, by far, my best ever encounter with this bird.  It stole the day bird-wise. 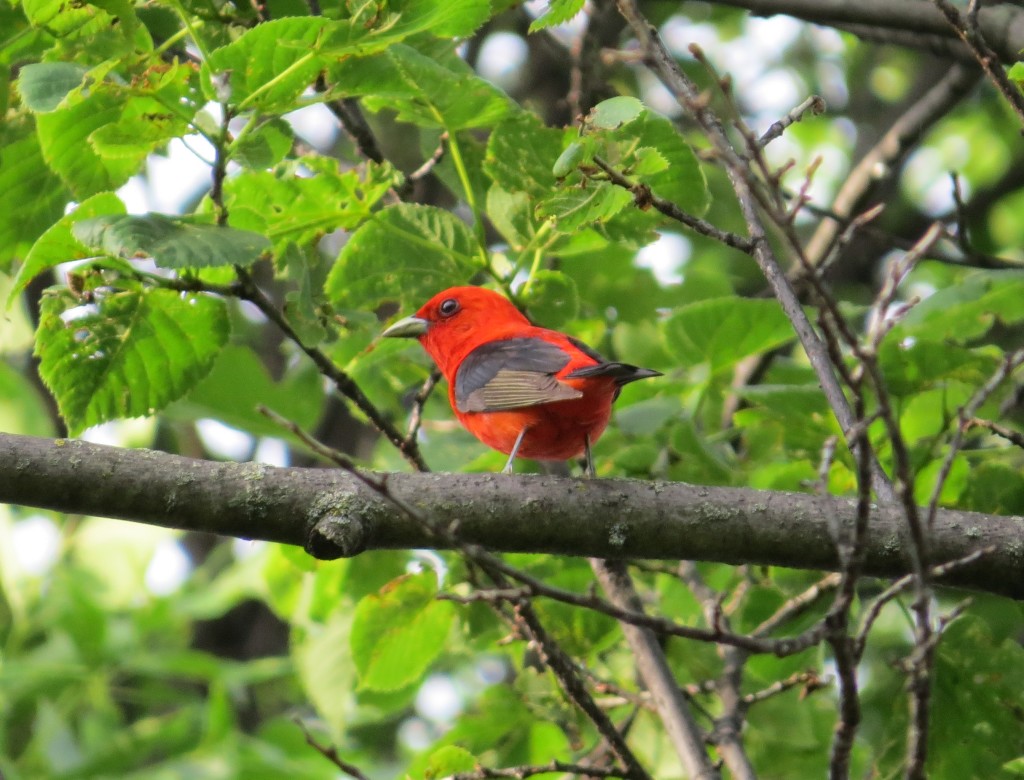 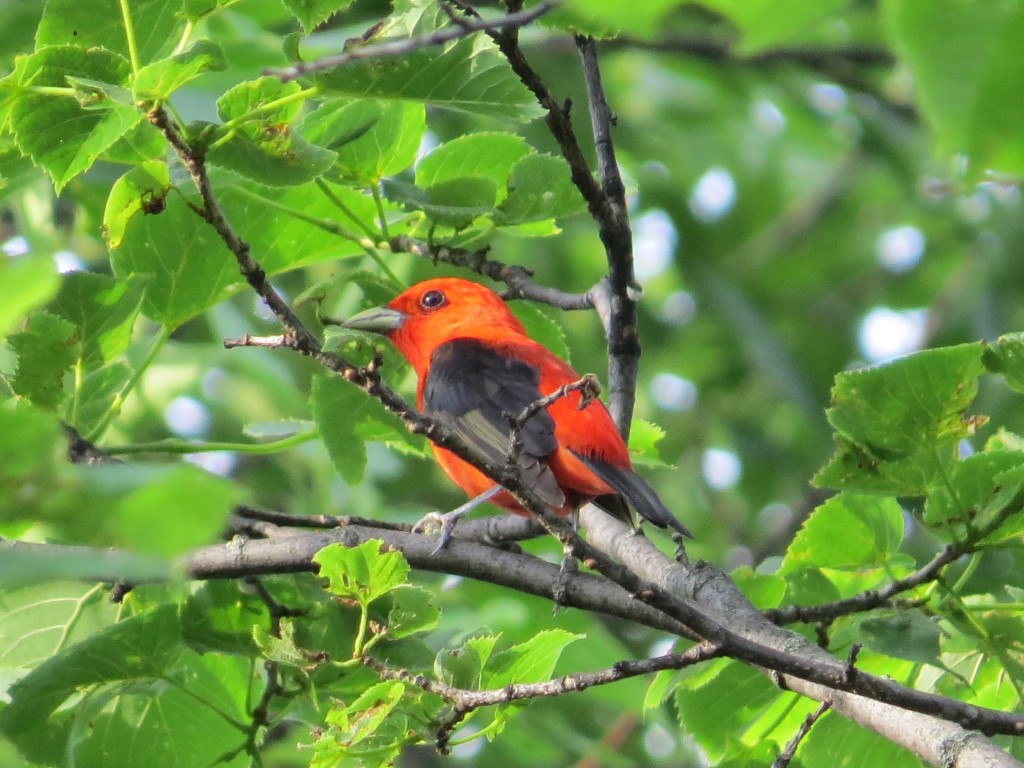 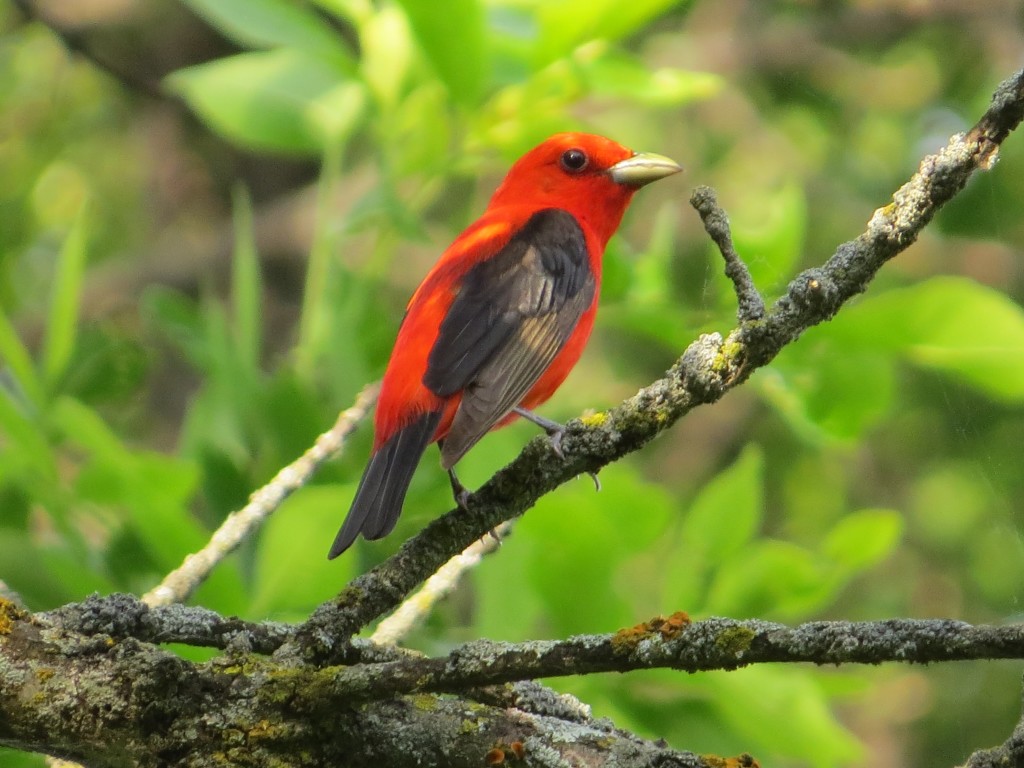 Nothing beats a home remedy.  I think my Scarlet fever is finally cured.

Some days, like today, are gray and rainy.  Some birds radiate their brilliance regardless. In my seemingly never-ending quest for a Wood Thrush lifer, currently a heard-only bird, I came across a couple of dapper and melodic fellows this morning that can brighten any day.  First up is the Rose-breasted Grosbeak. 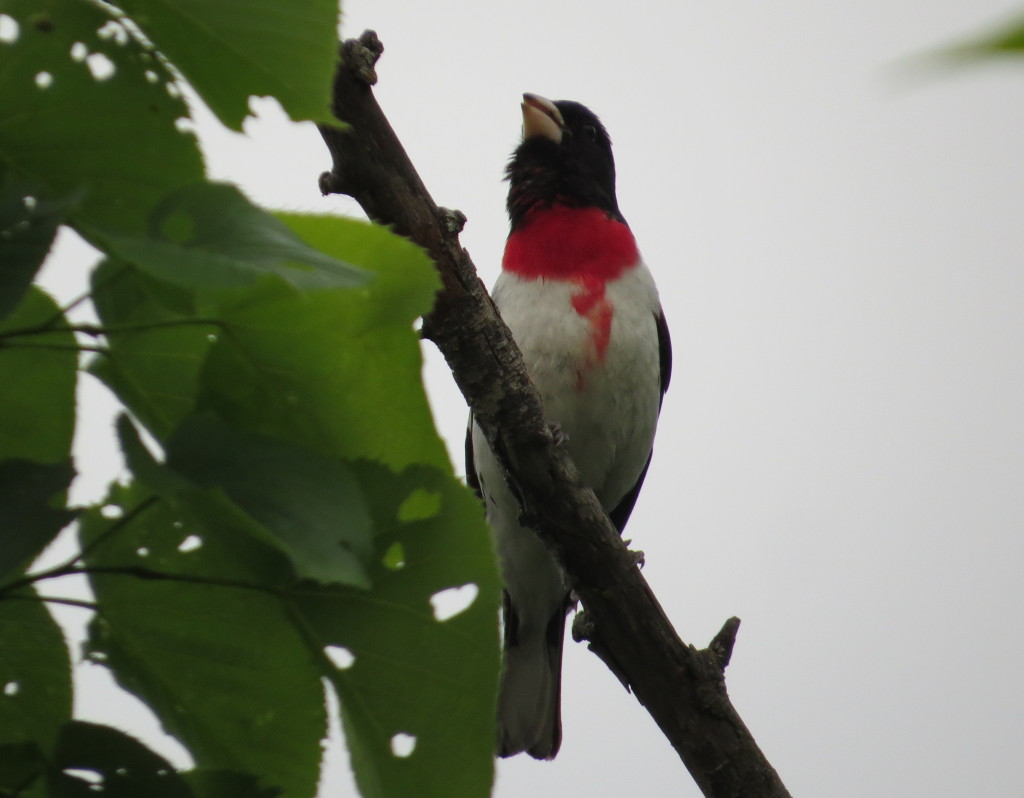 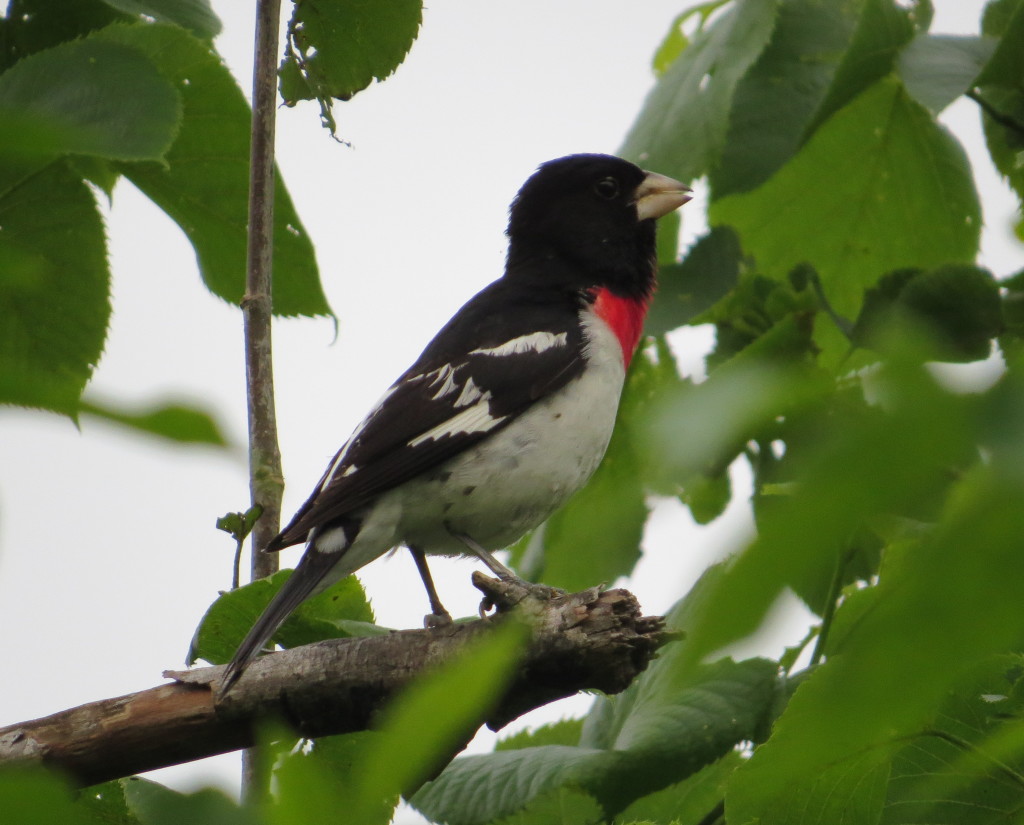 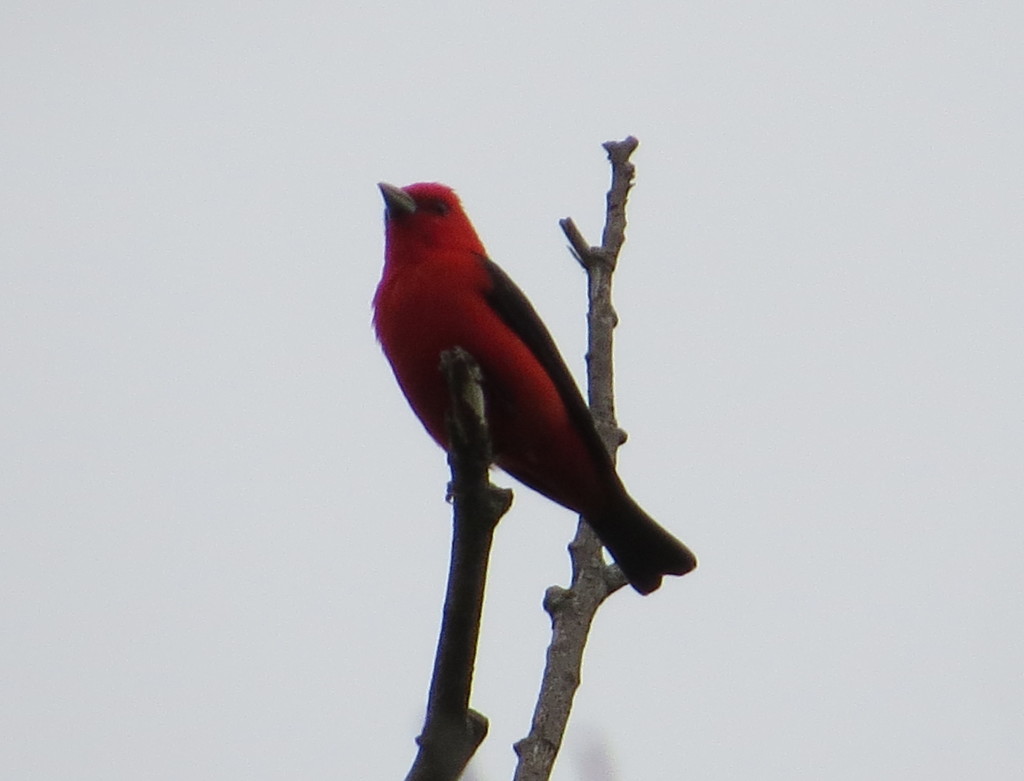 I’ve learned the Scarlet’s song which helped me track this one down this morning.  Identifying a tree-top loving bird by just its audio is a must this time of year with the trees fully leafed out. 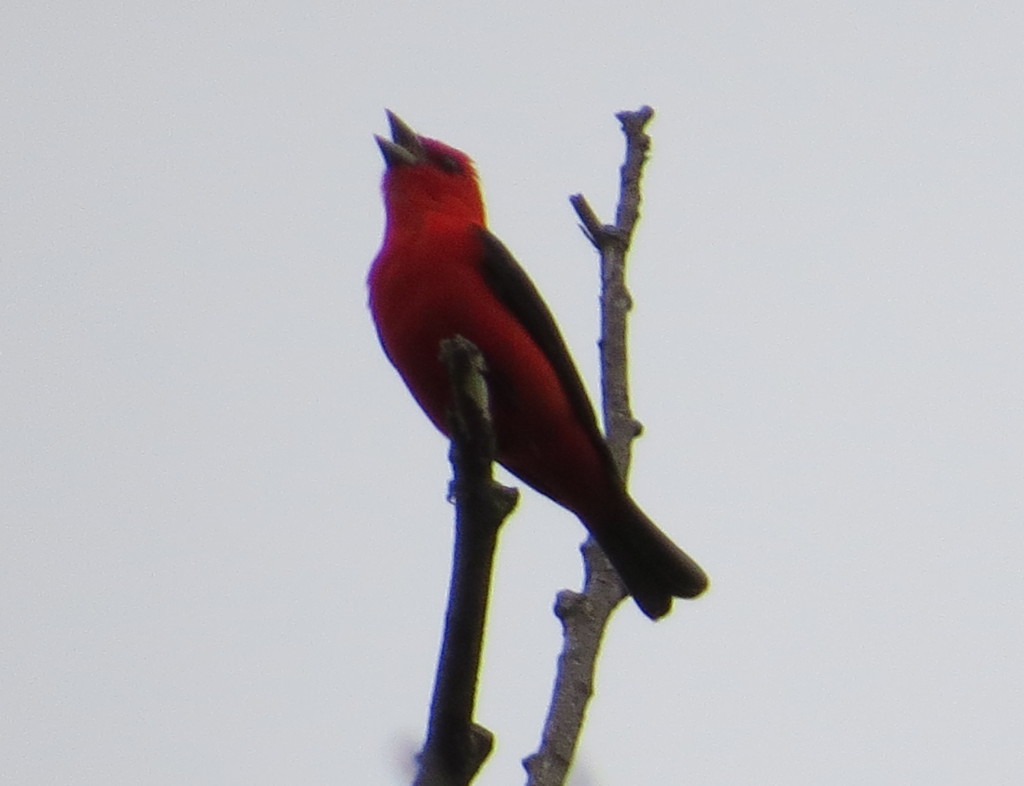 Seeing and photographing a Scarlet Tanager was a major summer birding goal of mine.  I just got done with school on Friday.  Not a bad start. 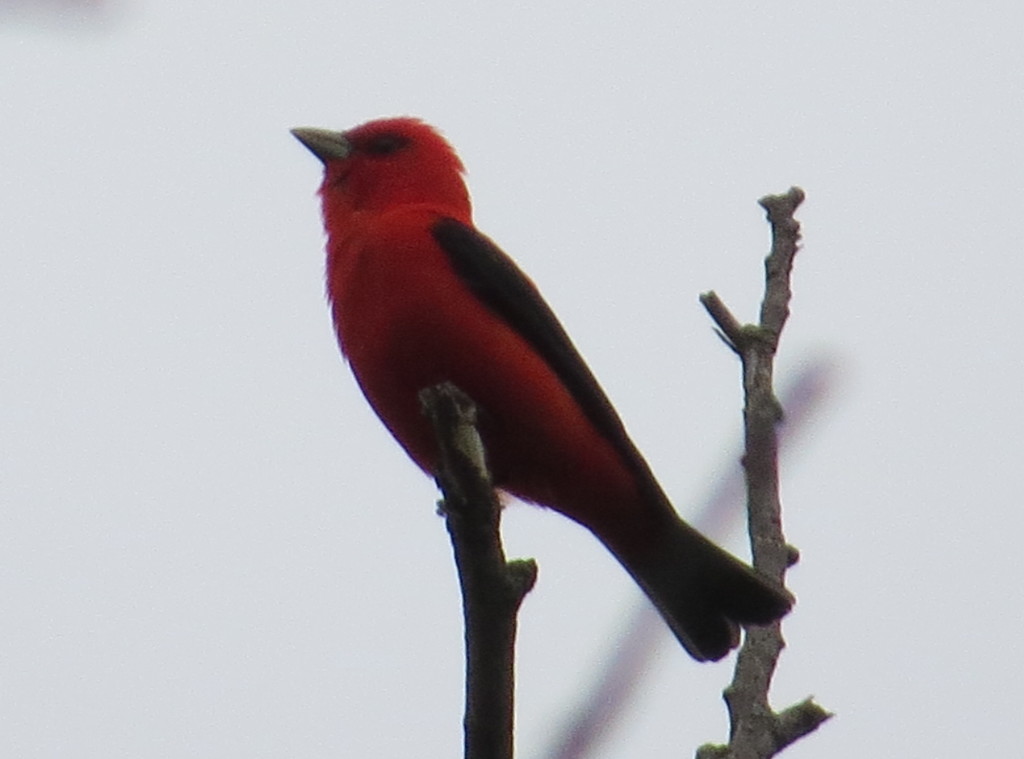 More time shall be spent this summer in the deciduous woods in the northern parts of Kandiyohi County.  The quest shall continue for finally seeing a Wood Thrush and getting the trifecta of perfect SCTA viewing conditions!