Anyone who has followed this blog over the years knows that fewer birds can get me as excited as the Blue Grosbeak, specifically Minnesota Blue Grosbeaks. It is doubtful that I’d even caste a second glance at one if I were birding in some southern state.  I take that back; I mean, it is still an insanely good-looking bird.  It’s the combo of that beauty and the Blue Grosbeak’s industrious efforts to colonize North America that have captured my imagination. Ever since 2014 I have been interested in the species’ northward movement in Minnesota by digging them up in new places and imploring others to do the same.

Of course, much of my drive came from a burning desire to see one in Kandiyohi County.  Time and time again, I’d go out to likely spots in the county only to come back empty-handed. Same story year after year. Each year I’d rethink my strategy and add new locations to my checklist of probable Kandiyohi sites, but I couldn’t manufacture a sighting to save my life. Instead, I’d have to get my annual Blue Grosbeak fix by finding new locations for them in neighboring counties. This year I used satellite imagery to find a few gravel pits in Chippewa County along the Minnesota River. Visiting the sites one July  morning yielded two previously undiscovered Blue Grosbeaks. This first one was so vocal that I heard it over a quarter mile away over the incessant noise of trucks at a very busy pit. 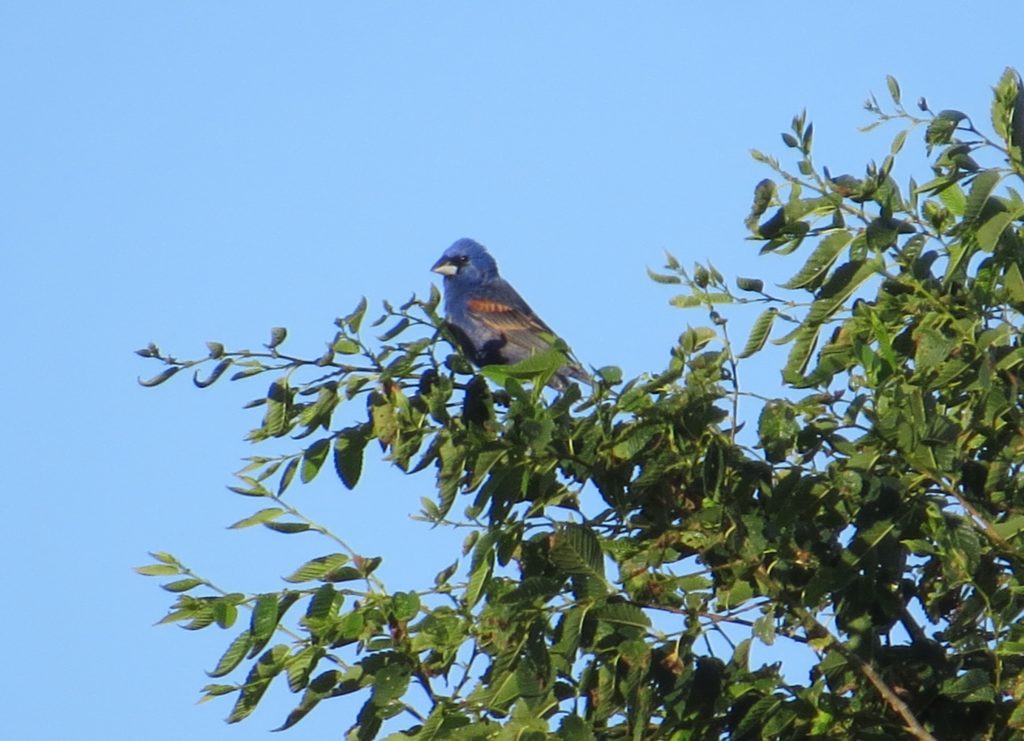 This second fellow was the quiet type. In fact, I stopped at this abandoned pit and didn’t see or hear a Blue Grosbeak. Playing a tape certainly couldn’t hurt in this situation. I’m glad I did because this bird materialized out of nowhere in an instant. 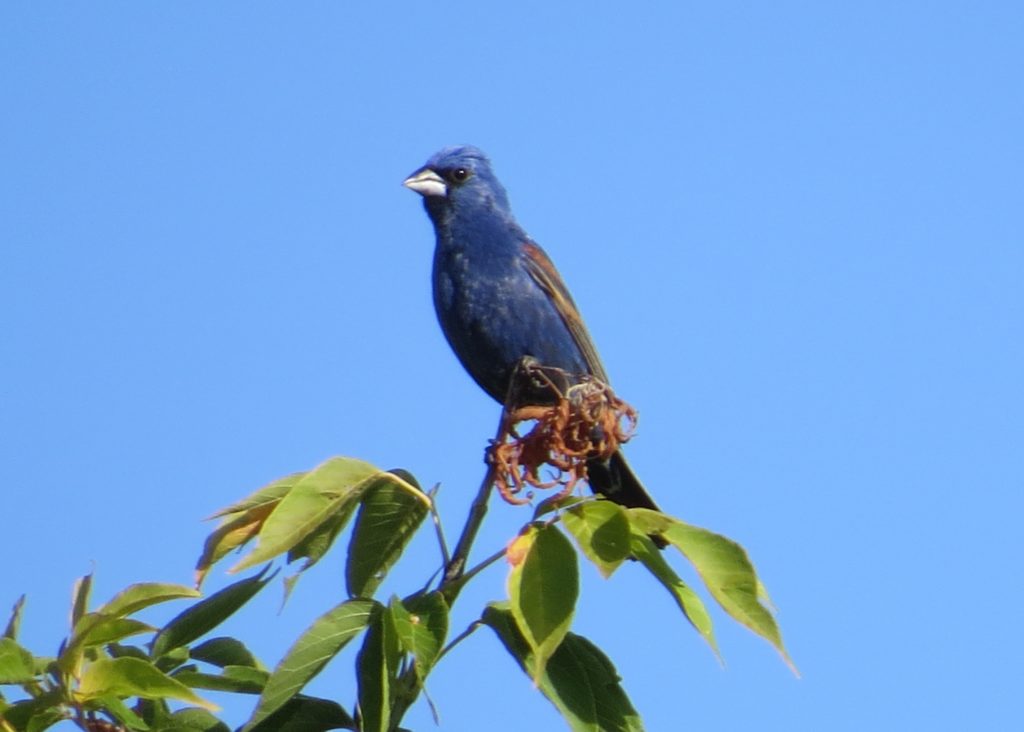 These were hollow victories. I wanted one in Kandiyohi in the worst way, especially as county first records fell in county after county: Anoka, Hennepin, and Washington. While I was happy the Blue Grosbeak was continuing to expand its range, I also kept wondering when it would be our turn. Always the bridesmaid. The Washington find really amplified these feelings. Pete Nichols and Ben Douglas set out to find themselves a county record BLGR and succeeded…minutes into their first attempt. I was both super proud and super jealous of these friends.

As we went deeper and deeper into August, my hopes for finding that elusive Kandiyohi Blue Grosbeak in 2017 had completely died. Like any losing sports team, hope was immediately placed on next year. Besides, there was something new and shiny in the bird world to divert my attention–an insane irruption of Red Crossbills! Blue what? We Kandi birders were red-eyed trying to tally this species that had eluded the likes of Randy Frederickson and Ron Erpelding for over 25 years. Now it was a very real possibility we would all get one. Efforts had shifted suddenly and dramatically.

Joel Schmidt was the first Kandi birder to break the ice with the Red Crossbills, seeing a flyover flock at the Little Crow Golf Course in New London on the evening of August 17th. At the time, I was camping at Sibley State Park with my brother and was not far away. I had to abandon my brother and kids the next morning to go look for an hour or so. We were unsuccessful, and so I returned to camping.  While I was playing cribbage with my brother, I got a call from someone in Grand Marais. Who the heck do I know there? I declined the call figuring if it was important that they’d leave a voicemail. Nothing. I then put my phone in the camper to charge it. Sometime much later in the afternoon during a pause between cribbage games, I went to check the time on my phone. It had blown up while I was away from it and was littered with crazy numbers of text messages, missed phone calls, and voicemails. Something really big was going down, and I couldn’t process the information fast enough. As I tried to make sense of the messages, my initial thought was that someone had landed the Red Crossbills, but instead of “red” I saw “blue” and “grosbeak” was where “crossbill” should be and there was a “Hockema” and a “Watson” mixed in. Then it hit me. Oh. My. Gosh.

I quickly learned that visiting birders John Hockema, Chris Hockema, and Josh Watson had stumbled into a private gravel pit, found a Blue Grosbeak, and had secured permission for a small band of us to return. The Grand Marais caller now made sense–Josh Watson was from there. But that call was almost a couple hours ago! Thankfully the guys were still on the scene by the time we got all this info sorted out.  Another bonus was that this pit was just a few miles from my present location at Sibley. I could literally be there in 5 minutes. Once again I abandoned my brother and kids to go on another crazy bird chase.

The entrance to the pit was a long, private road leading west from U.S. Highway 71. The Blue Grosbeak victors were waiting at the gate to meet Randy Frederickson and me and lead us to glory. The greetings were joyous with much laughter and banter. These fellows were relaxed and in good spirits while Randy and I were trying to hide the tension that comes when a county bird is nearby but has not yet been notched. Finally, we hopped in our cars and followed these visiting birders as they led us in our own backyard.  It was a surreal experience, to say the least, when we traveled into this vast complex of gravel pits we had never seen before, not even from a road. It was perfect Blue Grosbeak habitat. I may as well have been looking at Mars, I was so awestruck with the terrain. I had viewed this area on satellite maps many times but had never gotten around to getting permission to enter.

Once we finally got to the spot well over a half mile from the main highway, we got out and started looking. We had other birders on the way, so we were refraining from using a recording until all arrived.  We did not want the recording to lose its effectiveness. While we looked, Chris Hockema showed me the exact spot where Josh Watson had first spotted the bird. And suddenly I saw a bird fly over that had the right GISS. Josh had seen it too from a different angle and confirmed it was the Blue Grosbeak! So it was official, but not yet satisfying. We continued to search and search. Finally Ron Erpelding and Joel Schmidt had arrived, and we could try the tape. Ron played the tune, and instantly the bird teed up on a cedar! Unbelievable! It finally happened!! 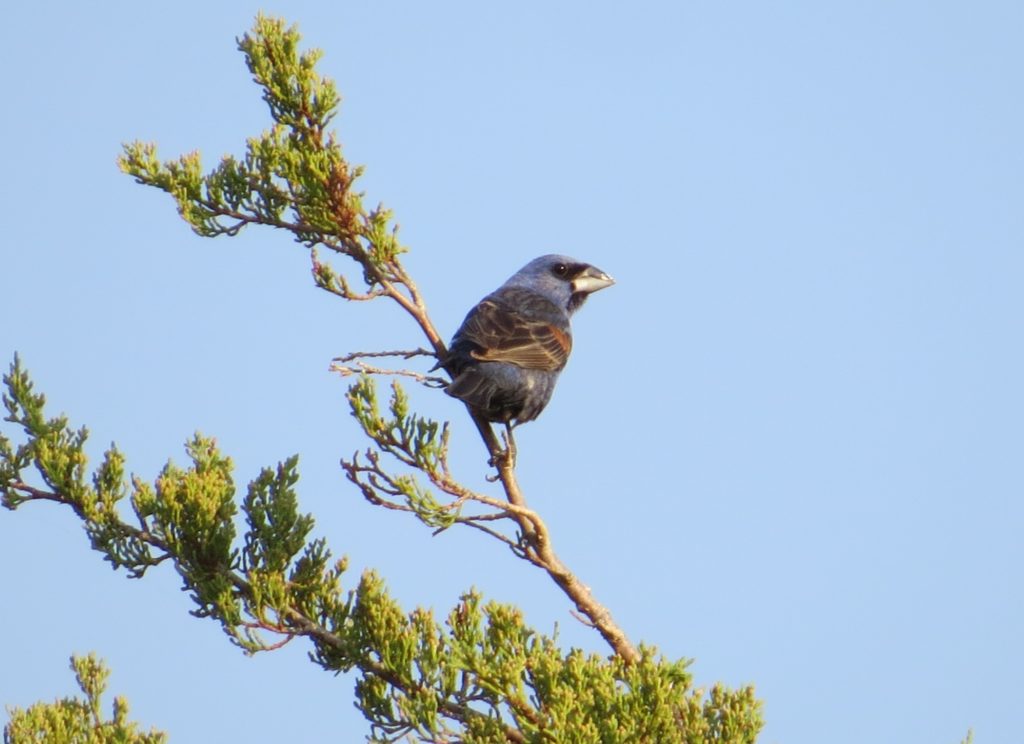 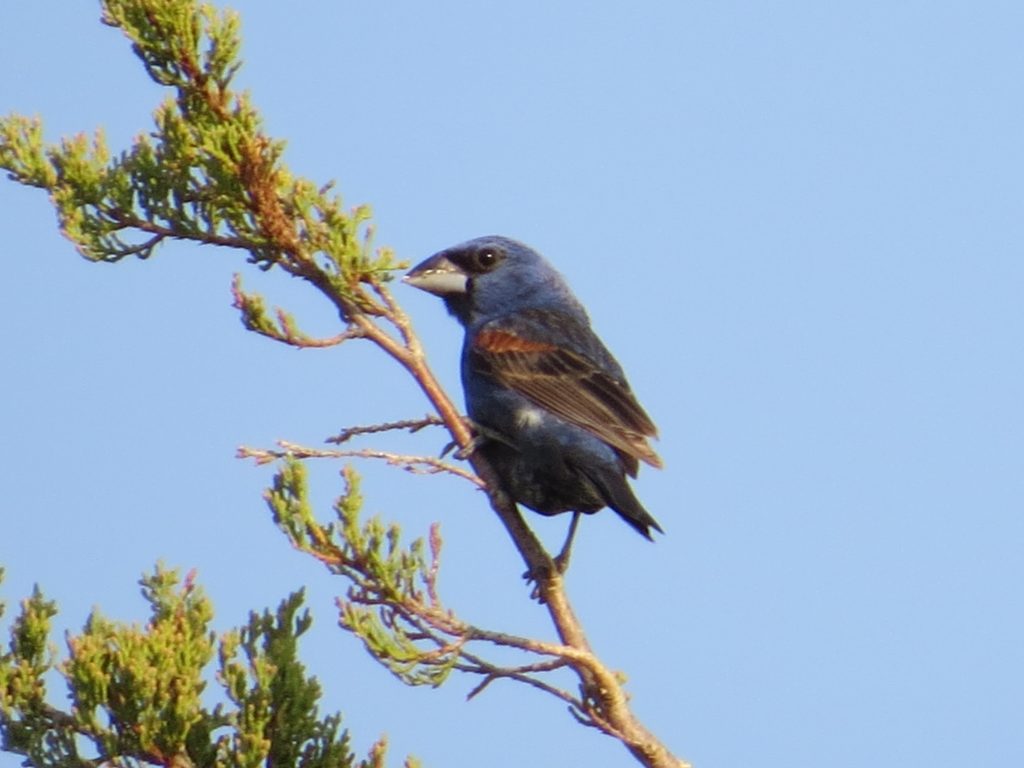 After hanging out there to our wild delight, it changed perches and hung out for a solid 10-15 minutes not moving. I don’t know that I’ve ever seen a Blue Grosbeak this confiding. This was the first time I had shared a county bird with long-time Kandi veterans, Randy and Ron. Giddiness abounded. 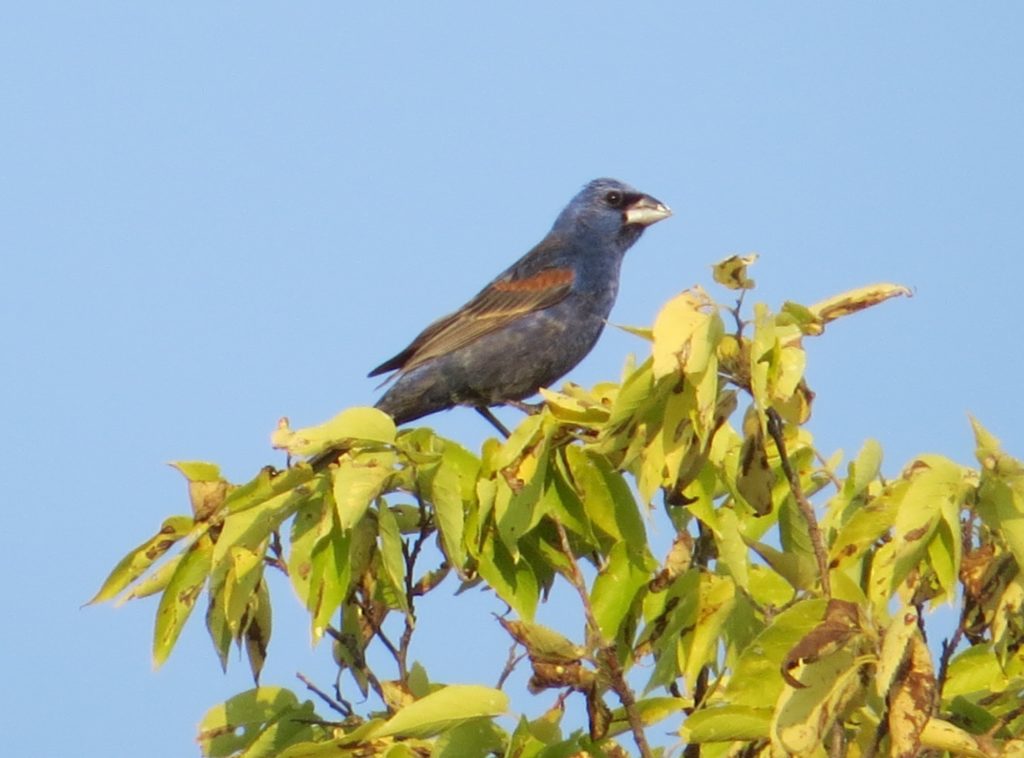 In a year that I had been pursuing new birds for my Kandi list, this one was more than just another tic. This is a bird I have pursued relentlessly for many summers.  This is a bird I simply love to find–anywhere. A wave of joy and rest washed over me. Indeed there was some self-loathing from the Kandi crew that we had not found this ourselves, but in the end it did not matter. We were still overjoyed.

A MEGA thanks goes out to John Hockema who was in a Blue Grosbeak mood that day and decided to try for one in Kandiyohi. It took guts to drag his birding companions into a county that had been searched so hard for this bird already and at a time that was the tail end of the Blue Grosbeak season. One might even say it was a fool’s mission. It’s a good thing John is no fool and that Chris Hockema and Josh Watson are top notch birders. They all are deserving of the honor of having the Kandiyohi County first record Blue Grosbeak along with the case of beer I had publicly offered on social media for anyone who could find this bird. 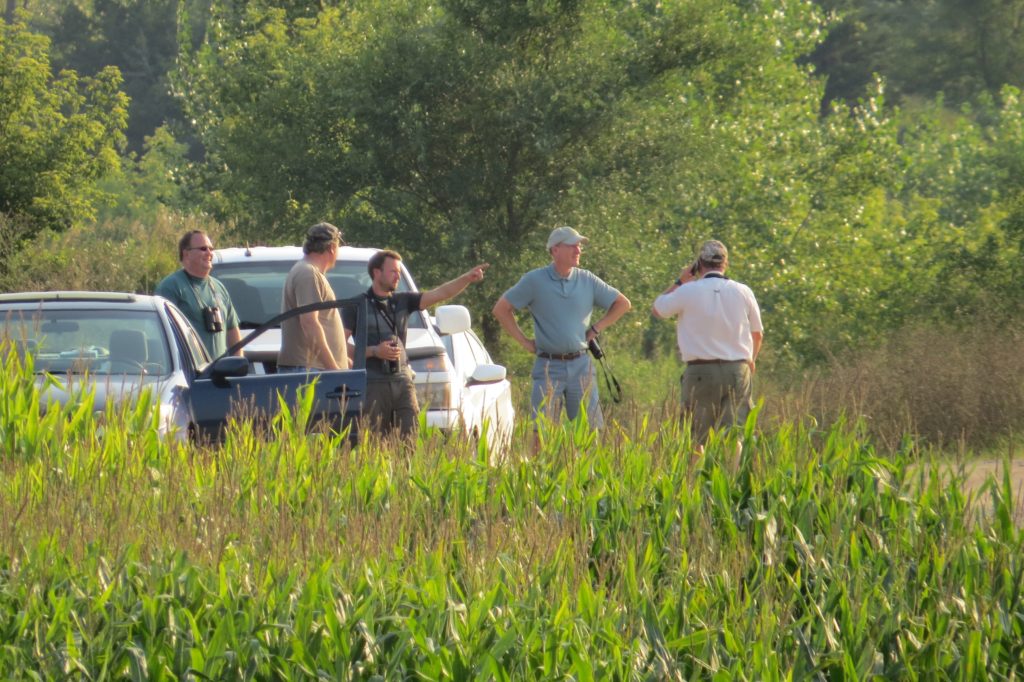 The Blue Grosbeak was Kandiyohi bird #252 for me. #253 was another shared county lifer with Ron and Randy, and it fell the very next day. In fact, I literally still had the camper hitched to my vehicle while in hot pursuit…