If you read our last post,One Good Tern Deserves Another, then you will know that Evan incorrectly identified the White-throated Sparrow as the White-crowned Sparrow. Well, this afternoon when I was home alone I happened to be looking out the window when the White-crowned Sparrow dropped by the birch tree out front!  I had to do a double-take to make sure I wasn’t seeing yesterday’s White-throated Sparrow. This was a life bird for me and a new yard bird.  Evan was on his way home, and I was hoping the bird would still be around when he got there.  Here are a couple of pictures I took while I waited for Evan. 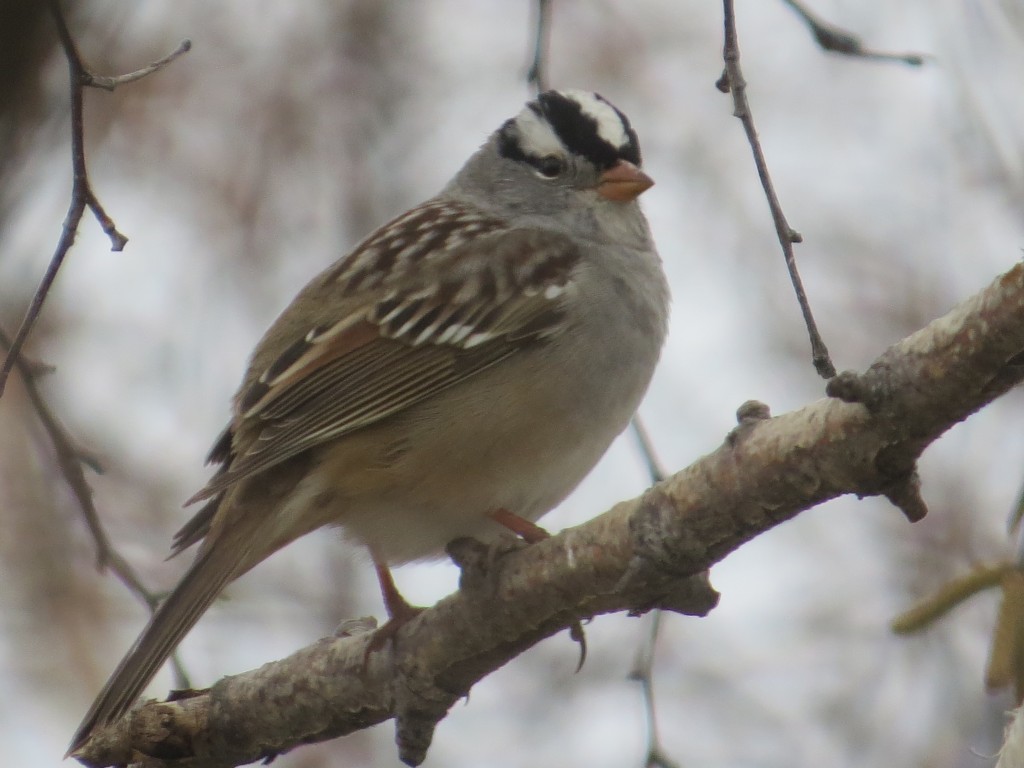 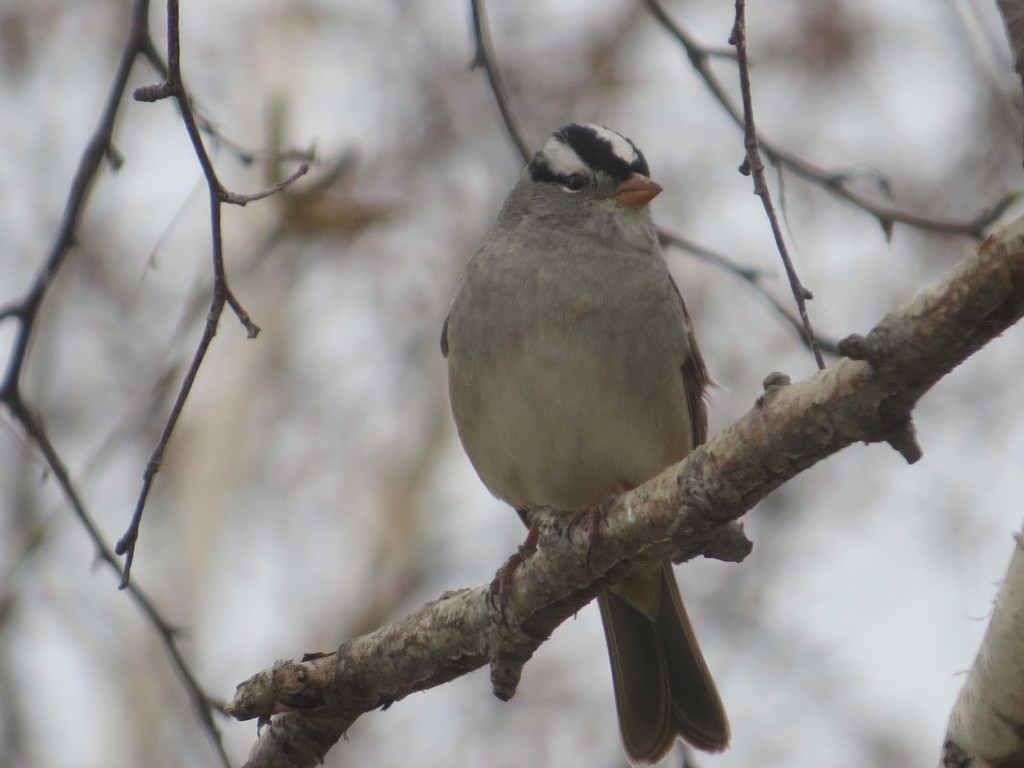 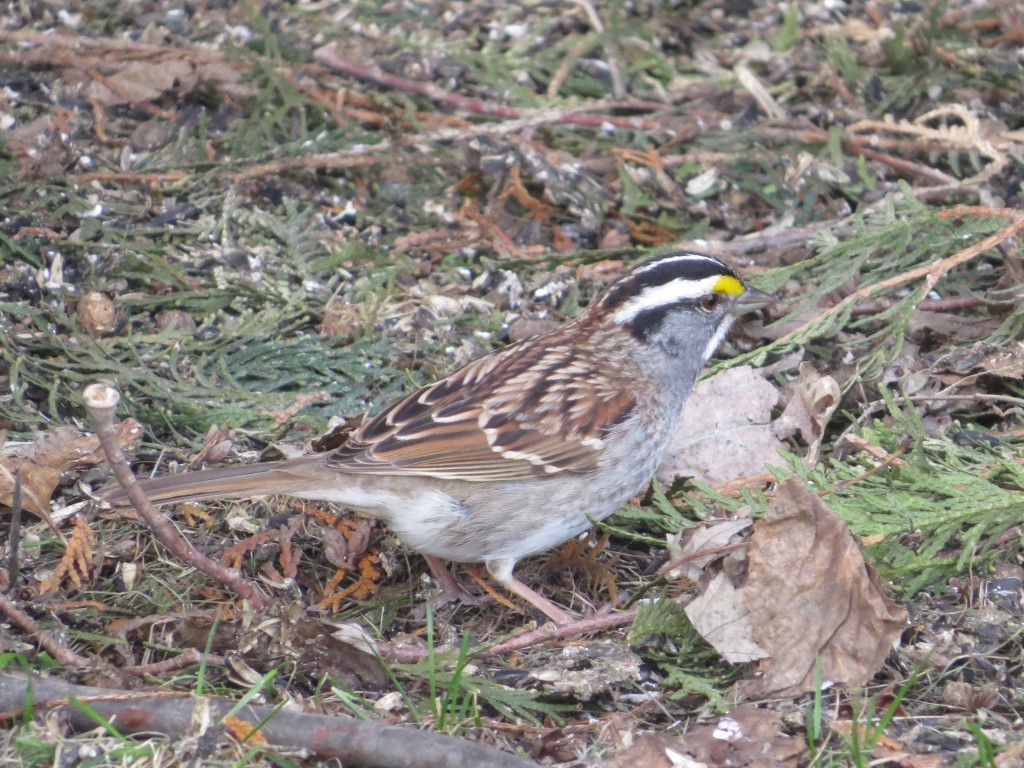 The sparrow disappeared while I watched.  Evan still wasn’t home.  I was a little worried. I looked a little later and was relieved to now see two of them feeding on the ground by our tree.  I saw the van coming down our street, so I went outside to point the new sparrows out to Evan.  By this time they had flushed into the tree.  When the van door opened and I could explain what was going on, the two birds flew away into our bushes before he saw them.  I told Evan to go wait on the living room couch and just watch out the window.  He did, and he was pretty sad.  He didn’t think he’d get to see them.  I bet we didn’t even wait 5 minutes before they came back.  Whew!  Later on we had three of these birds scratching the ground looking for seed.

Life birds are more fun when shared, and they are even better when they are also new yard birds.  This was our seventh species of sparrow to come to the yard since we’ve started watching birds.  There are a few more species of sparrows that have returned to Minnesota this spring that we have yet to see.  We are hoping the Harris’s Sparrow will decide to visit any day.  I no longer think sparrows are boring.  They’re actually pretty cool.

Yesterday Evan declined my offer to take him to a marsh in western Minnesota to look for the White-faced Ibis, American Avocet, and Western Grebe.  He was too busy having fun playing outside with the neighbor girl.  Weekend play time is precious for a kid, especially since we are finally enjoying some nice weather.  A one-and-a-half hour trip each way to a marsh would certainly chew into that time.

Later on while Marin napped and Melissa made supper, the rest of us (Evan, Grandma, Grandpa, and me) took a short drive to do a little birding close to home.  We ended up going to the pond at my school.  Almost immediately upon arrival we saw a small gull-like bird dashing about.  Just as I was about to ask what it was, Evan shouted out, “A tern!”  The little bugger was right.  His studying paid off again.  We watched about three of these flying non-stop in the windy conditions.  I knew there were several different terns, so I took many pictures to get as many clues as possible for identification.  I think it would have been easier to photograph a flying golf ball.  We got to hear the tern as well.  With our collection of blurry photos and the sounds we heard, we determined we had the Forster’s Tern!  This was a life bird for at least Evan and me. 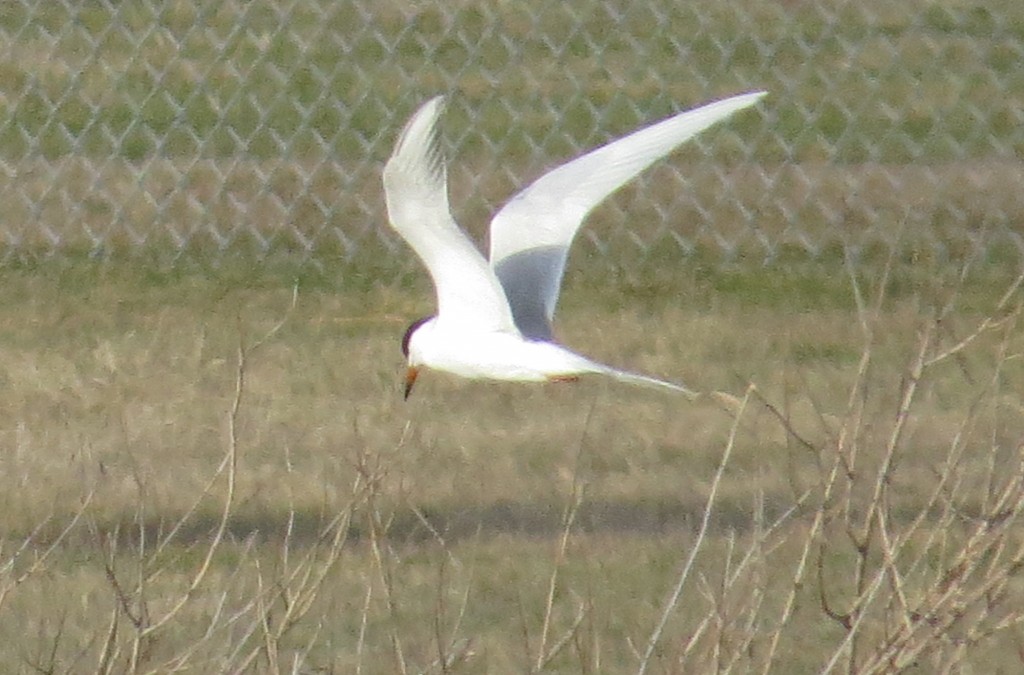 The combination of the bird’s speed and shooting into the sun made it tough to get a decent picture.  This one would have been great if the sun were on the other side.  I found the long, forked tail to be a really cool feature on this bird. 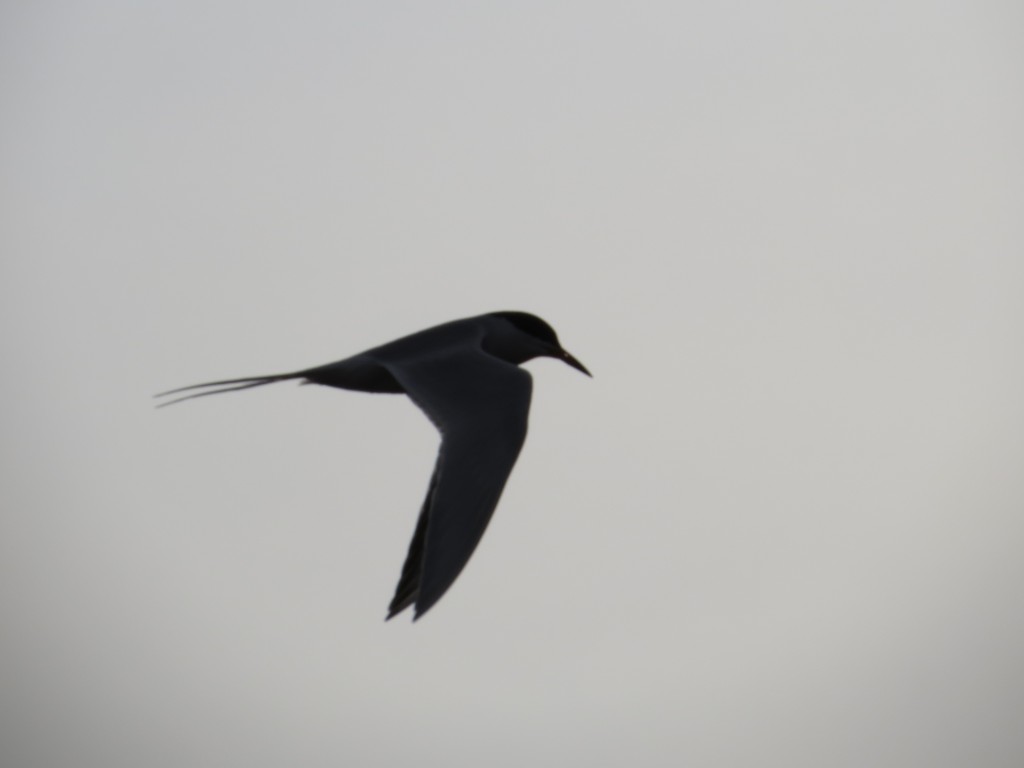 There were other birds on the pond, but we were focused on getting a positive identification on this life bird.  I did manage to take a picture of a lone Trumpeter Swan that stopped by while we were there. 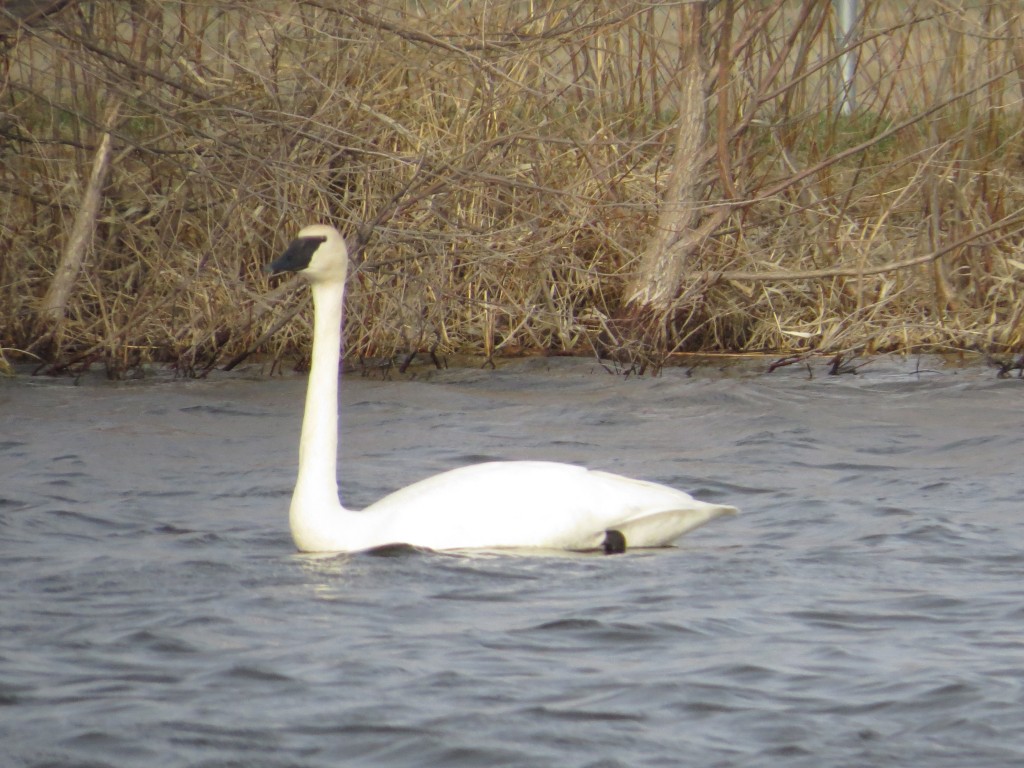 Today Evan’s grandparents did their own migration north to their home.  As we were working around the yard and house tonight and adjusting to two less people in the house, Evan came running to me and said, “Dad, we’ve got the White-crowned Sparrow!” I grabbed the camera and ran out to the deck.  Evan proudly pointed out the bird. I wouldn’t have had to run because it had no fear of us as it scratched in the leaf litter looking for some food.  Evan was a little off on his identification this time as we actually had the White-throated Sparrow.  It is very similar in appearance to the White-crowned Sparrow, so Evan wasn’t too far off.  He knew it was a life bird for us either way and a new yard bird!  Way to go, Evan!   This sparrow is a family favorite even though we’ve never seen one before tonight.  Its song is a northern Minnesota classic and reminds us of home.  It goes something like this: Oh, sweet kimberly-kimberly-kimberly.

Here you can see why the White-throated Sparrow is so-named. 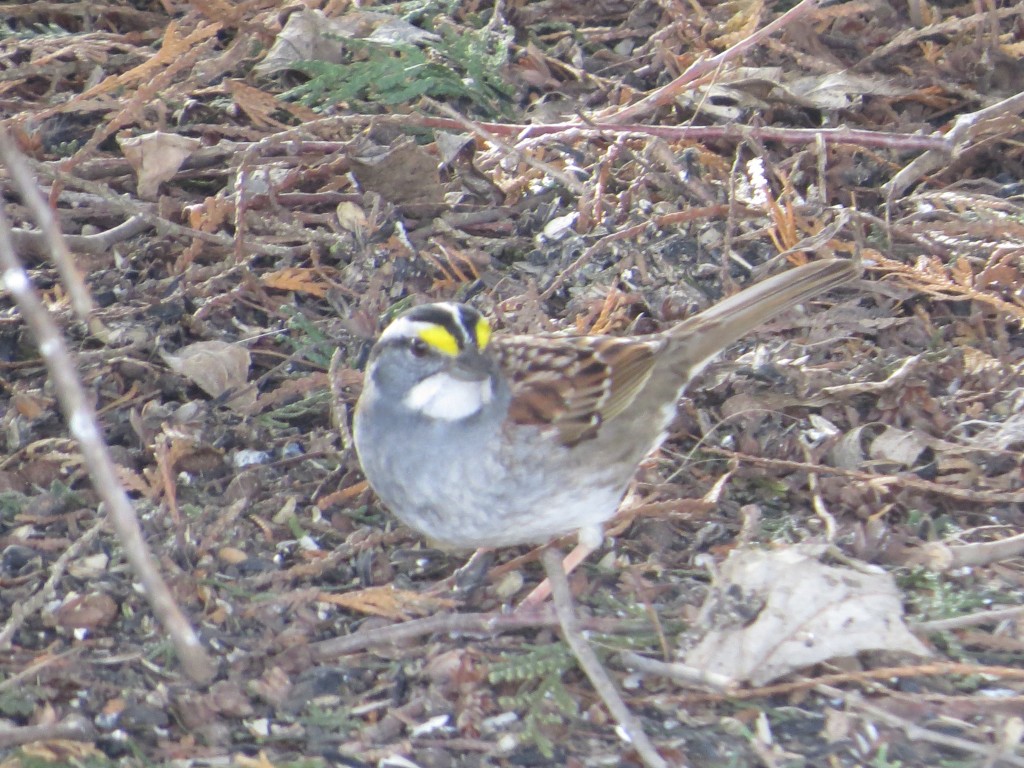 Usually I’m the one finding and identifying new birds for us.  The last two days Evan has been finding the good ones and pointing them out to me.  Evan has been a birder in his own right for some time now.  It’s been fun to watch him use his eagle eyes and demonstrate his knowledge of birds.   He’s a real asset to the Team.

After getting skunked on turkeys on both Monday and Thursday, Friday was the final day of my season and my last shot at getting my first turkey.  I was excited.  I had heard gobbling the day before, and the promised temperature of 70° would probably mean the turkeys would be getting into their spring routine of cruising around looking for ladies.  On this day I was hunting out of a deer stand.  It was a comfortable, enclosed stand that had 8 in. high rectangular windows on each of its four walls.  I could see all around me and got to watch all kinds of neat things: a crowing rooster pheasant beating his chest with his wings, two curious raccoons, three deer all within 10 yards, and even some hen turkeys leave their roost and land on the woodland floor beneath me.

One thing I loved about this location was to watch the Mallards and Wood Ducks flying back and forth between the ponds on my friend’s property.  I almost wished I were duck hunting instead of turkey hunting.  I watched one particular pair of Wood Ducks flying toward my general area.  Then I was astonished to watch them land on a tree branch about 20 feet away!  I forgot all about turkey hunting.  I grabbed the camera and jockeyed around that deer stand to try to get good shots through the branches out those small windows.  Here are some of the images I captured.  The hen gave me much more clear shots, so there are more of her than the drake. 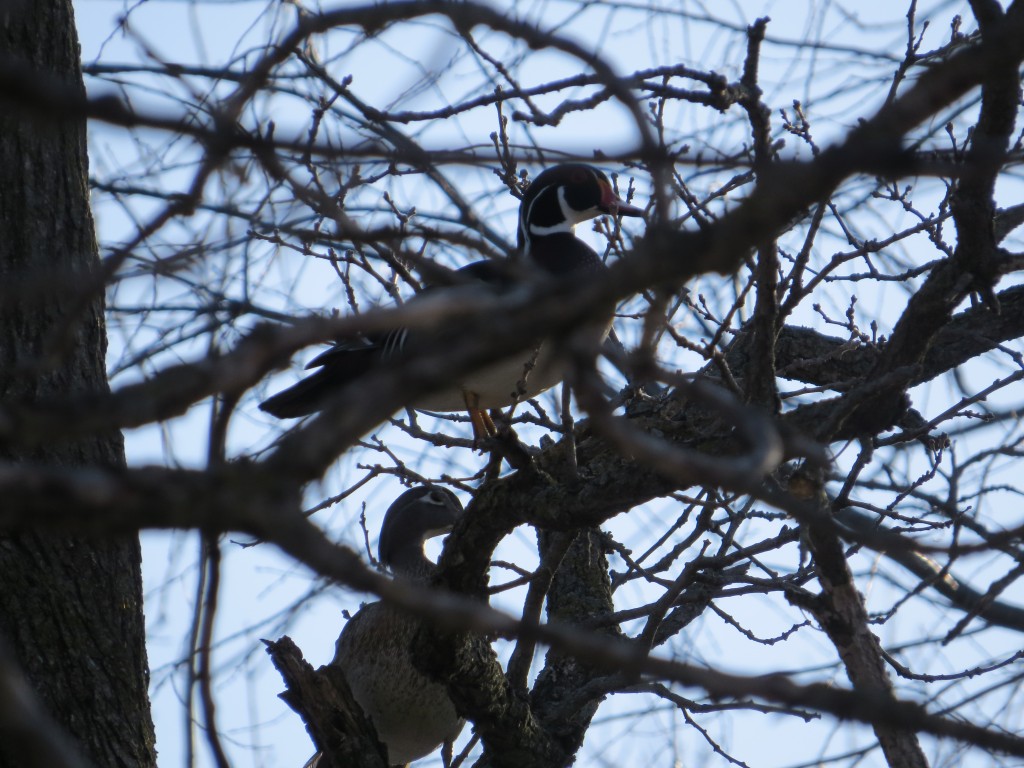 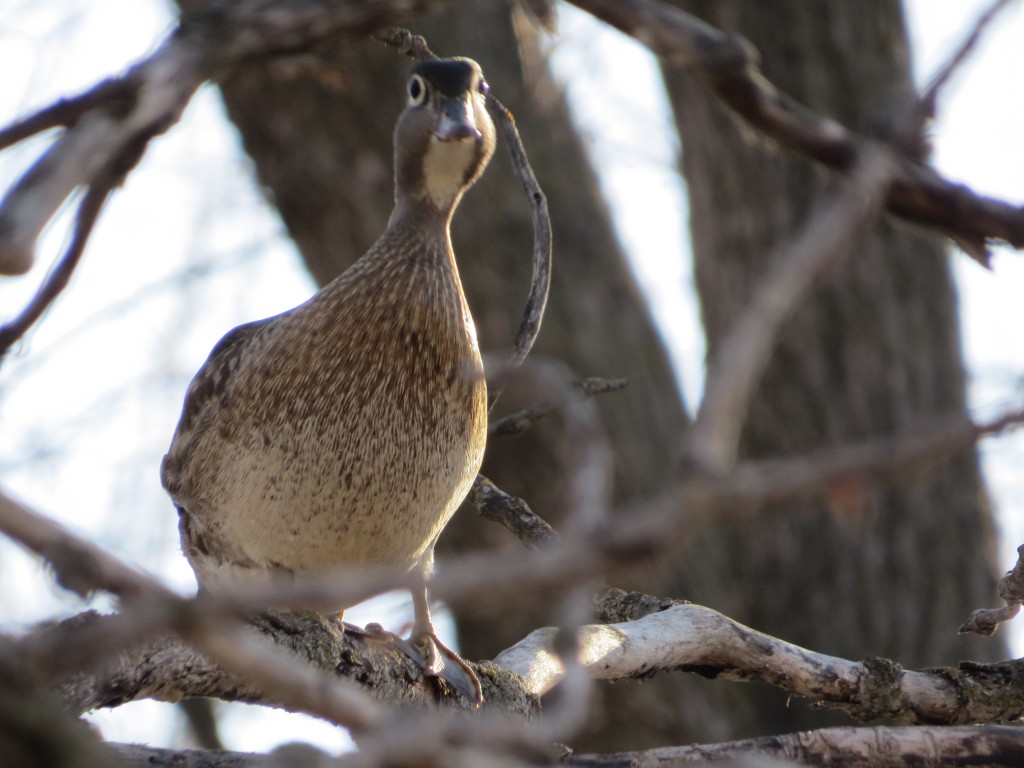 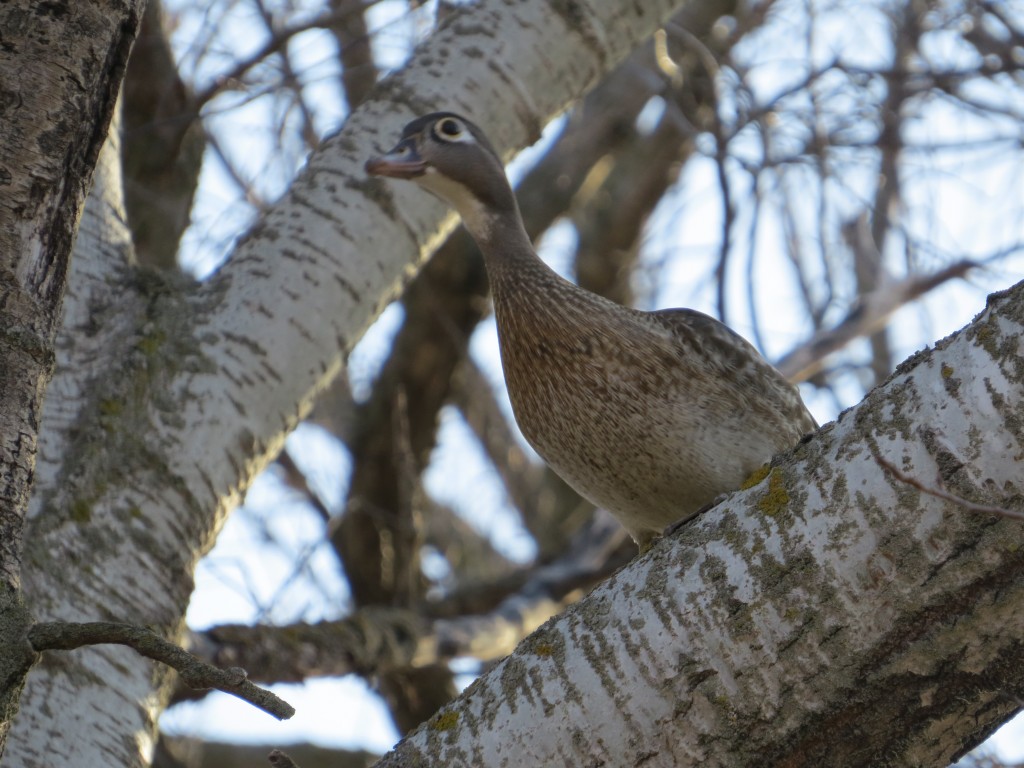 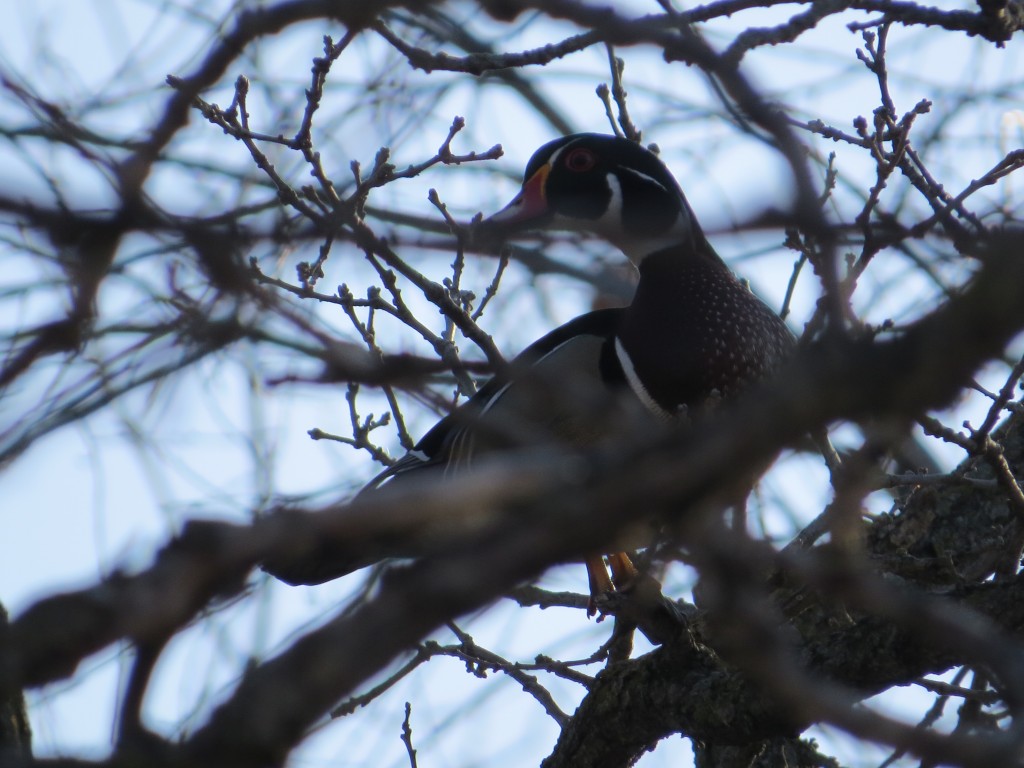 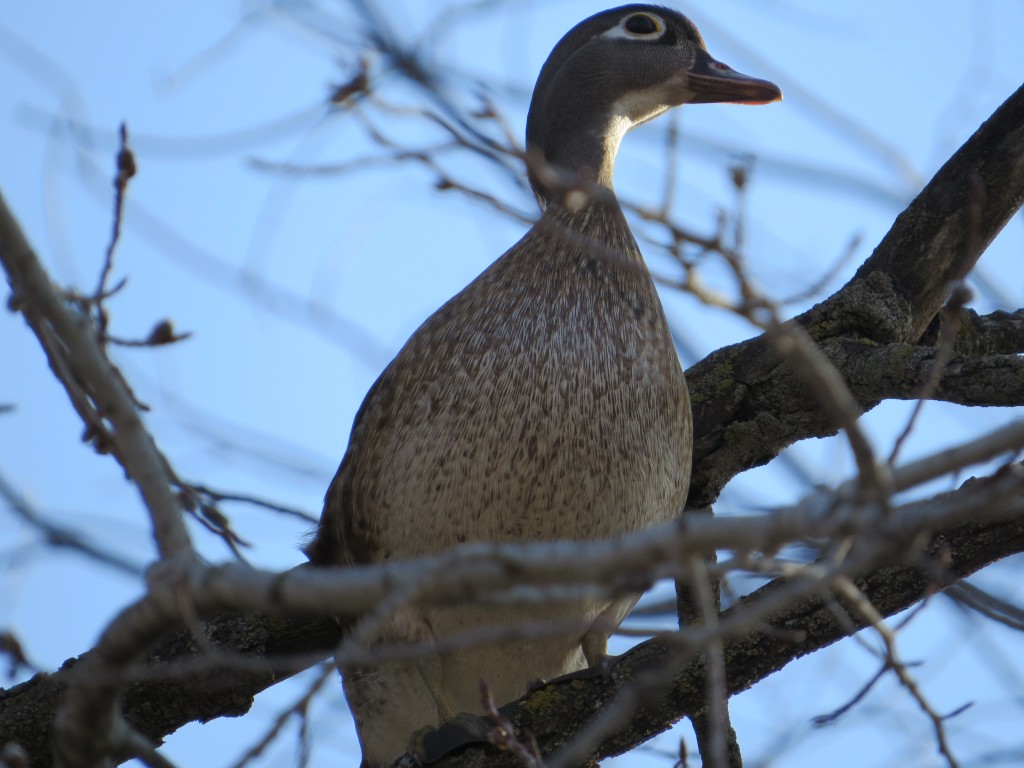 This hen kept calling with this low call which is pictured below.  I finally figured out what they were up to – they were checking out possible nesting sites in the trees.  I watched the hen peek into cavities in trees looking for just the right spot. It was so cool to watch them look for an old-school nesting sight.  Many Wood Ducks use the nesting boxes that people put out for them, which have been largely responsible for the resurgence of the Wood Duck in the last century. 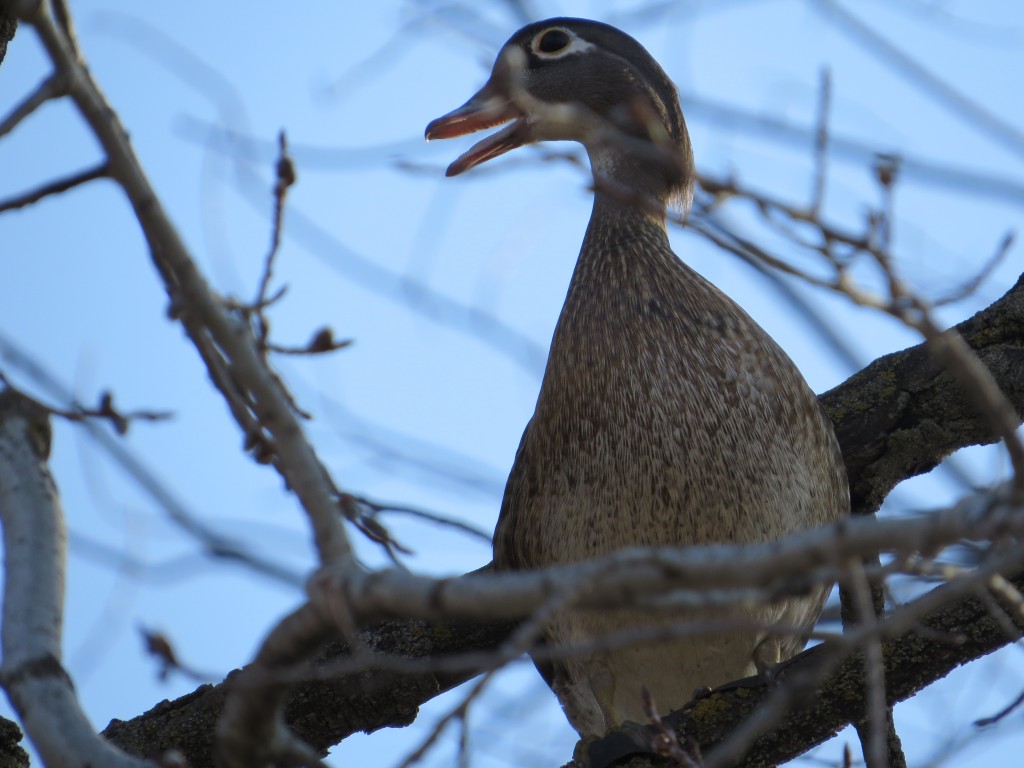 I wish I would have got the picture of the hen peering into the hole below.  It was clear that she was in charge of the decision and that he was just along to say, “Yes, dear.”  She decided the hole below wasn’t suitable because they quickly moved to a new branch. 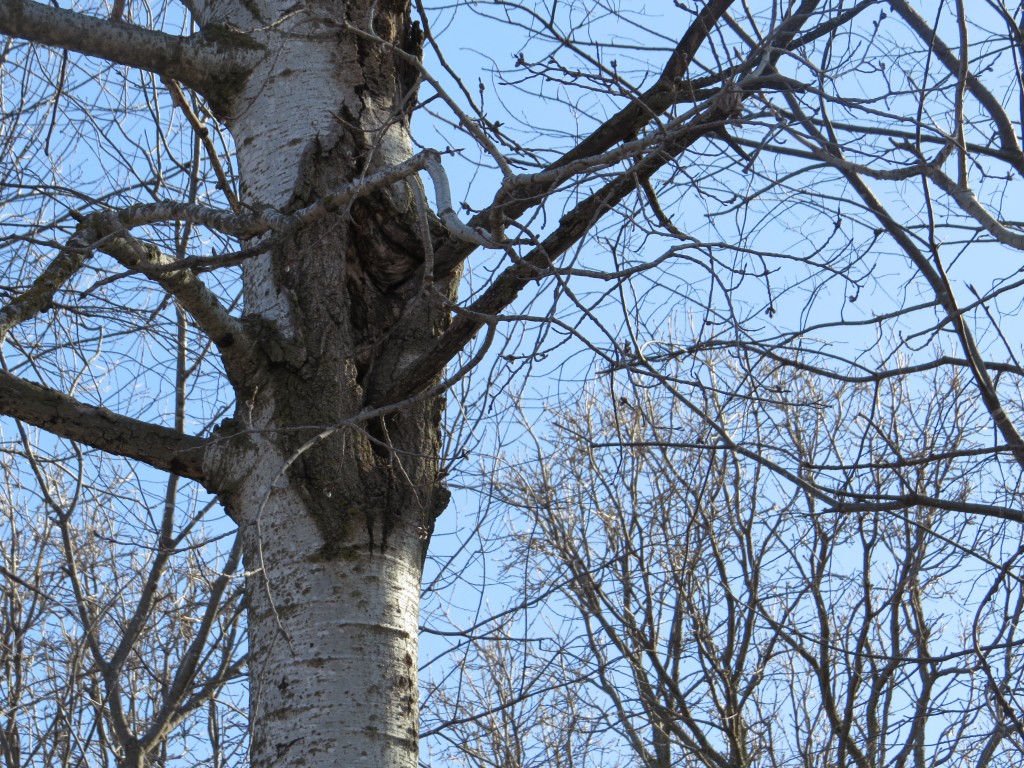 That next branch was merely 6 ft away from me.  I was excited because of the proximity and unobstructed views of these handsome ducks. 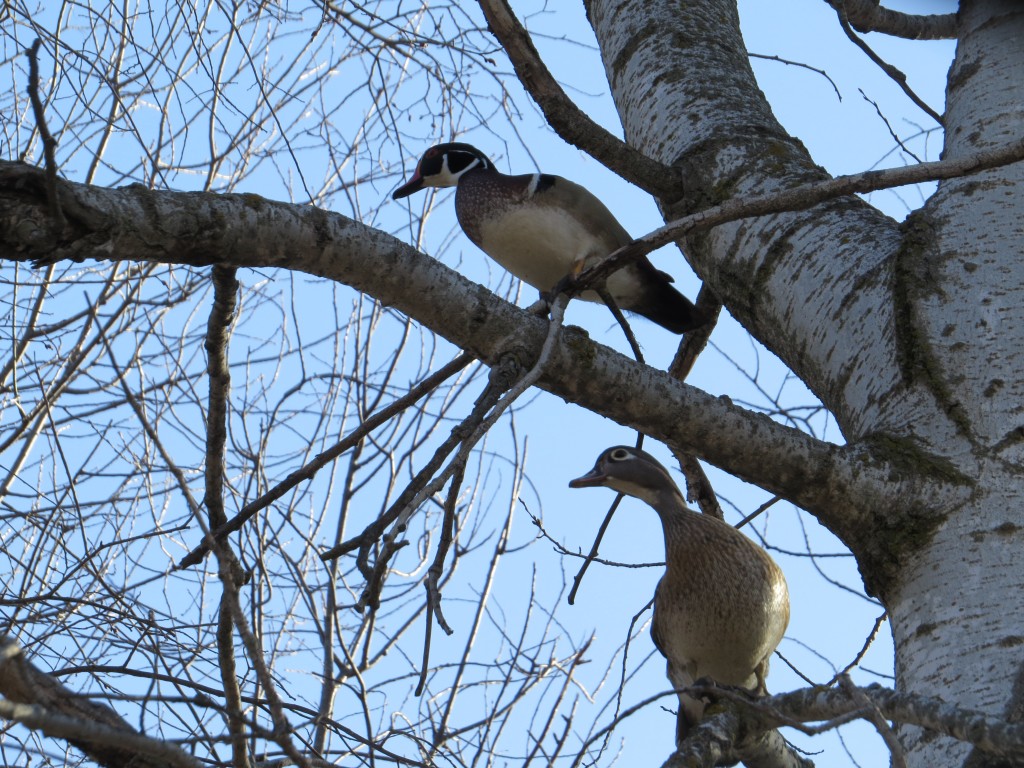 I was setting up to take more pictures when I heard the hen make her call that said, “Come on, hubby, it’s time to go.”  Well, she was looking straight at me when she was making the call.  I pressed down the shutter button just as she launched off the branch straight at my head!  I – pardon the pun – ducked (and maybe swore).  At just the last second she saw me and pulled up, landing on the roof of the deer stand. 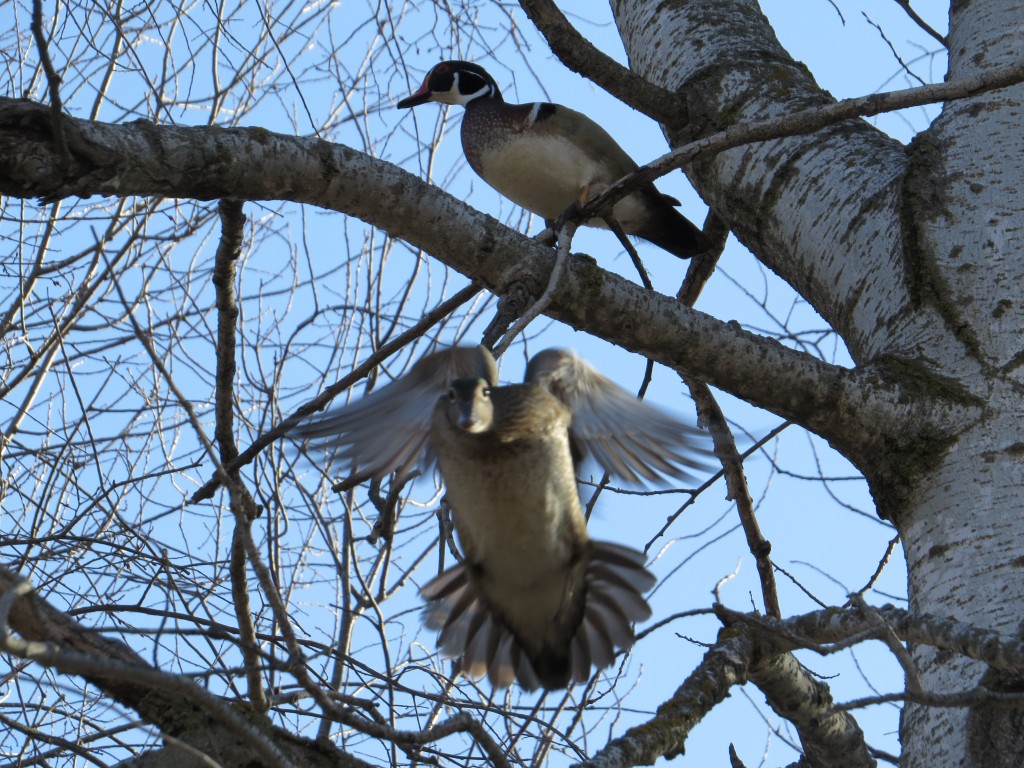 Whoa!  I think both our hearts were beating a little quicker.  Hubby was still on the branch, so I snapped a couple more of him before the two flew off. 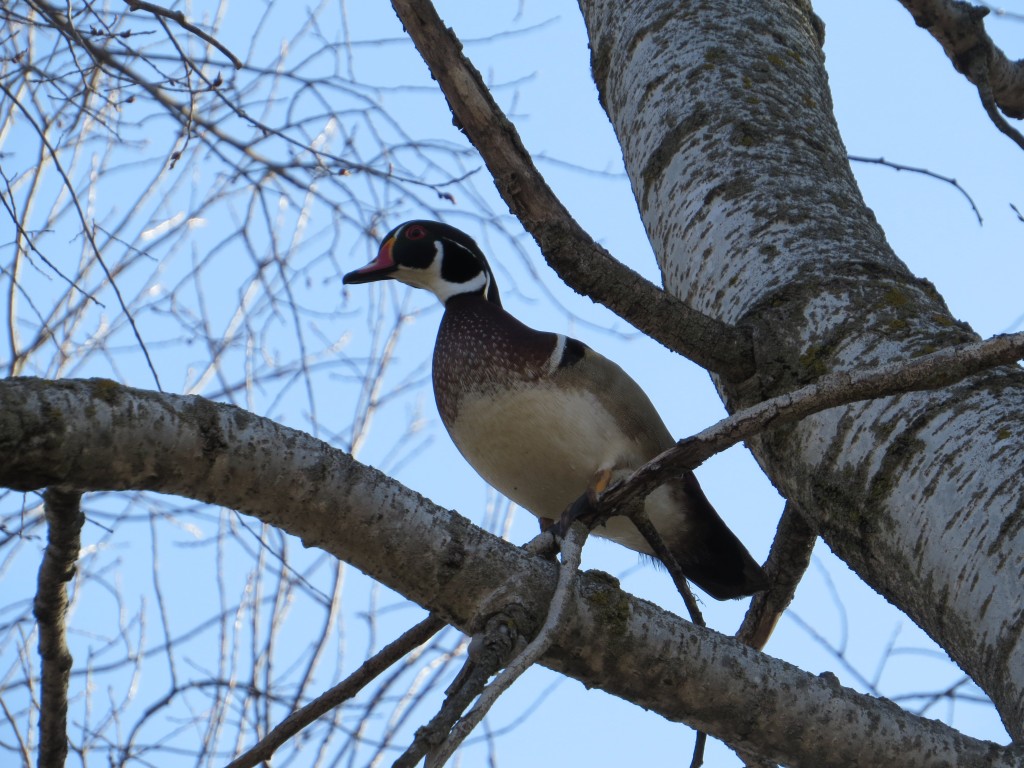 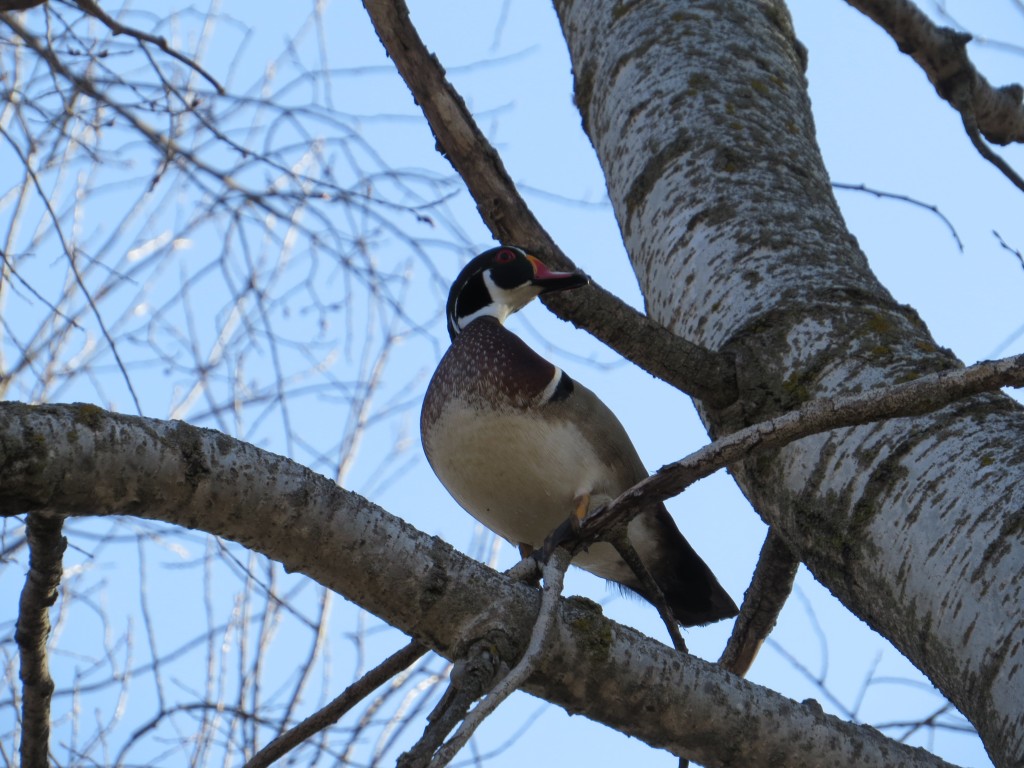 It was the coolest duck experience I’ve ever had.  The Wood Duck is one of my favorite birds of all time, so this was a special occurrence for me.  My hunt was made.  I didn’t even need to get a turkey to be satisfied.

I did continue to wait for a turkey, but nothing was happening today.  My friend whose land I was on told me to try another deer stand on another property of his.  So I did, but I didn’t have any luck.  I wasn’t too worried because my day had already been made but also because I had a back-up plan.  It turns out that Melissa’s co-worker has several turkeys invading his yard almost daily.  He and his neighbor gave me permission to hunt in their somewhat suburban setting in the countryside.  So I went out to this new location around noon. 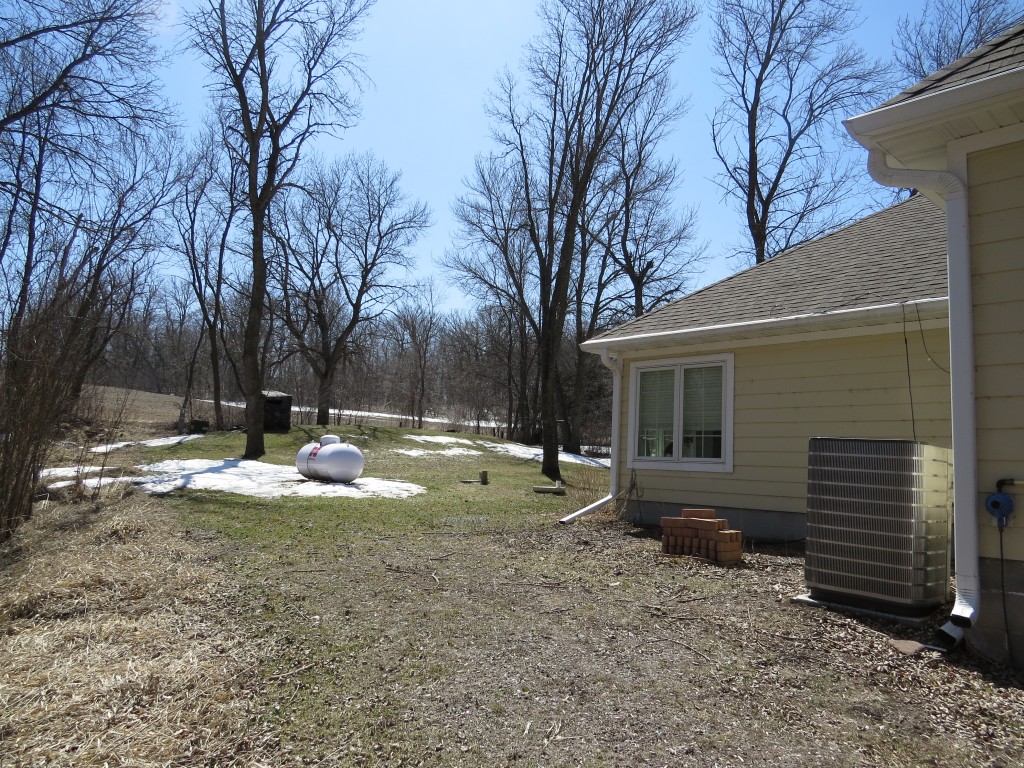 I set up a turkey blind on the wooded edge of their property that borders a field.  Do you see it above? I put out a hen decoy and a tom decoy.  Normally you just need a hen decoy because the call you make resembles that of a lonely hen and will draw in a tom.  Since the toms weren’t responding to calls or decoys, my friend suggested putting out a tom decoy as well to try to arouse the jealousy of a tom.

After I put out the decoys and got back into the blind, I used the turkey call and waited.  Fifteen minutes later, I stuck my hands out of the blind with the turkey call and did it again.  Immediately I was answered with the other-worldly sound of a gobbling turkey that was close.  He was off to my right along the wooded edge.  I hadn’t looked there before I stuck my hands out of the blind.  Did I blow it by exposing myself?  I kept calling, and he kept answering.  It started to walk closer and closer.  I could tell it was a jake – a one-year-old male turkey.  He probably thought this was his opportunity to get an easy lady friend.  Toms will push jakes away.  He wasn’t fanned out or puffed up.  He was very leery.  I wanted him to come just a little bit closer, but he eventually turned around and left.

Maybe that was my chance.  I regretted putting the tom decoy out.  I bet that intimidated him from coming to the hen decoy.  I decided to go out and grab it so that wouldn’t happen again.  I stepped out of the blind and saw the jake still on the wooded edge!  I dove back in.  After quite awhile he eventually came back, but he still wasn’t coming close enough.  He disappeared again for a long time.  This time I went out and removed the tom decoy.

I was frustrated that I hadn’t taken the shot when I had it.  Over an hour went by.  Repairmen at the house behind me were coming and going, visiting with the homeowner.  This jake was gone for sure.  There was no way he was sticking around with all that racket.  I’d have to hope for a different, unsuspecting turkey.  After another hour or so, this turkey again decided to come check out that irresistible hen decoy.  And this time he came close.  I took the shot. 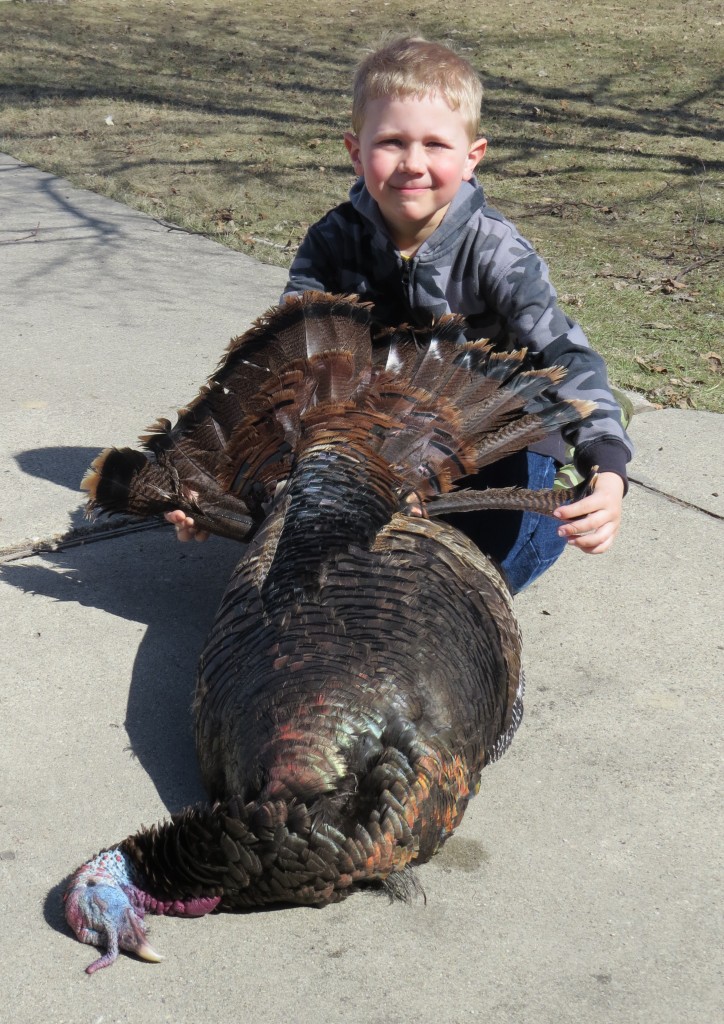