We got confirmation on our gull.  It was, in fact, the Franklin’s Gull.  This gull is a lifebird for  both of us, and it may be my turning point for taking an interest in seagulls.  It was a very cool find yesterday.

Evan is approaching the century mark on his life list tally.  It could happen any day.  This afternoon he and I went out birding while Marin napped and Melissa hid Easter eggs and prepared our Easter dinner.  As we drove along, Evan suddenly remembered that when he was at his friend Soren’s house yesterday, he found the Cedar Waxwing –  a life bird for him.  I have learned to trust Evan’s abilities as he is super observant about habitats, bird behavior, and bird identification marks.  However, I still have some doubts, so I quizzed him.  He told me the bird was in a berry tree (makes sense for the waxwing) and was with some American Robbins (that, too, makes sense).  I asked him if it could have been the female Northern Cardinal to which he replied, “No, Dad, I saw the yellow tip on its tail.  I was right under it!”  That detail clinched it.  Why do I doubt him?

There wasn’t much for ducks today.  I imagine with the increase in field “lakes” from the melting snow that our little hole on Foot Lake isn’t the only happening place anymore.  The few ducks around were taking their afternoon naps on this sunny, but cold day.  Like yesterday’s lifer, the Bufflehead: 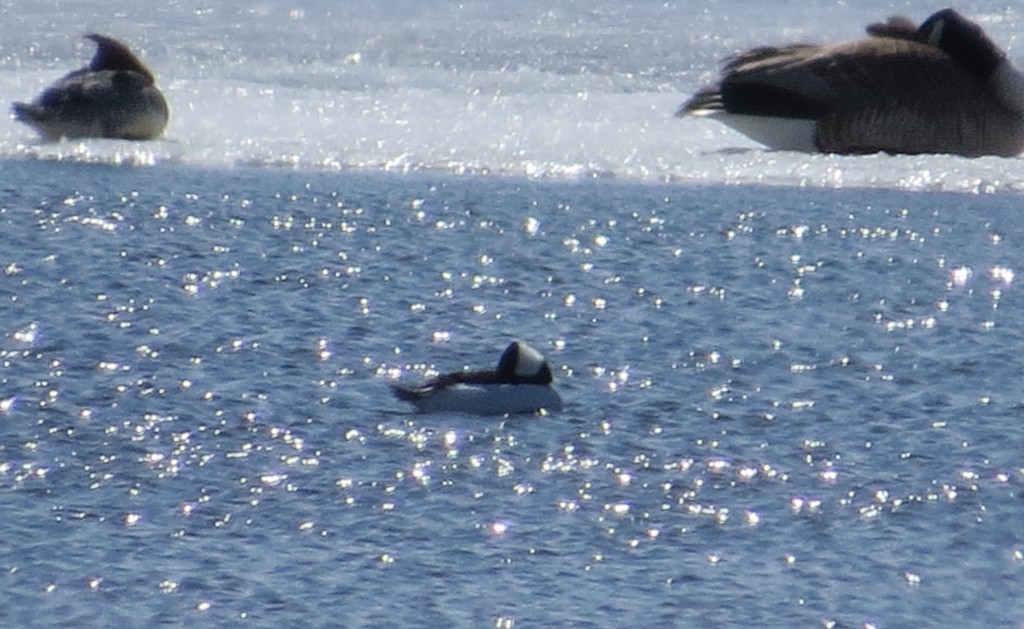 We drove along and encountered a Killdeer hunting for worms.  Killdeer are a sure sign of spring.  Look how it listens for its prey. 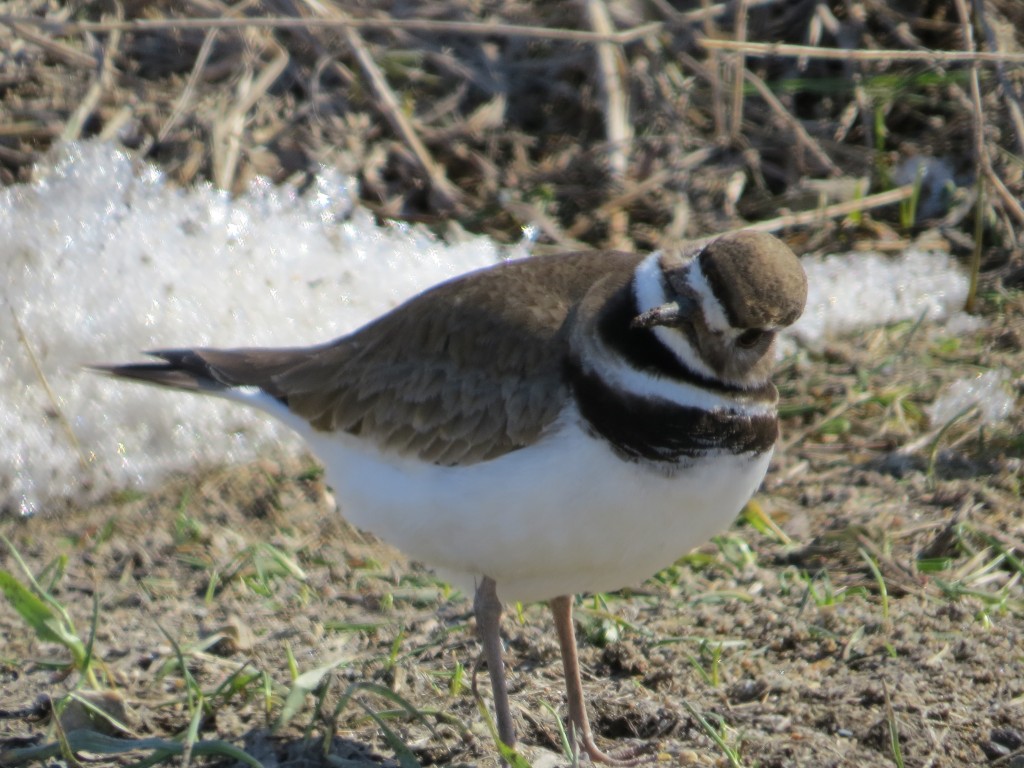 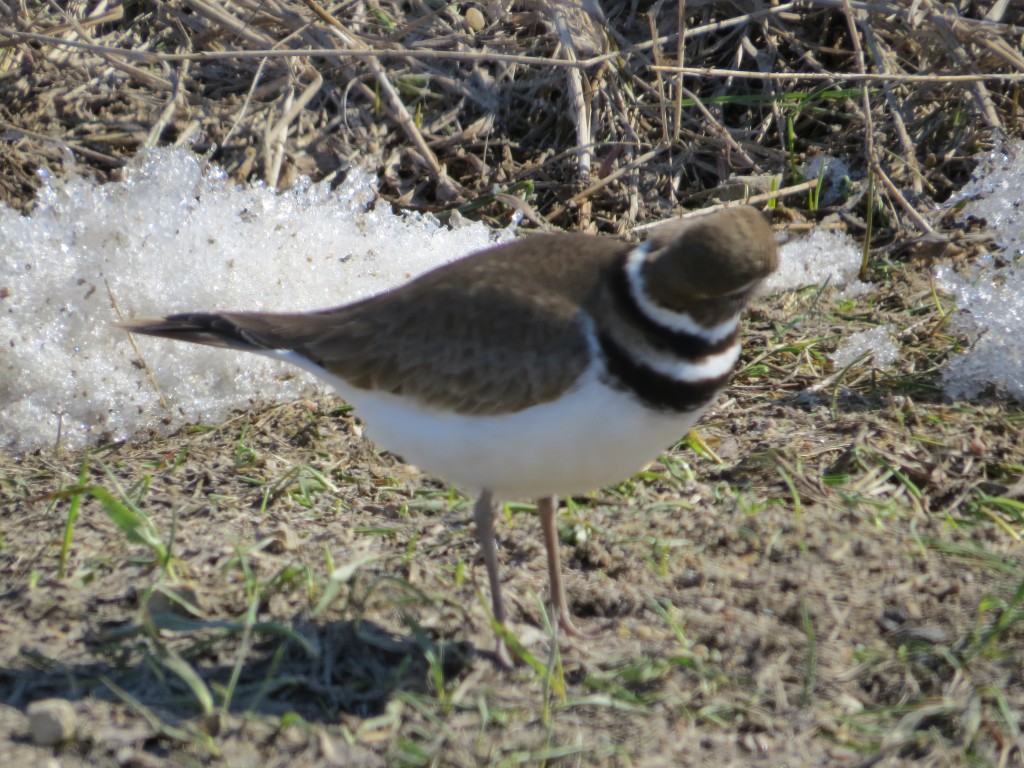 Its hard work paid off!  I was pretty excited to see a nightcrawler today.  That has to mean to mean winter is finally over. 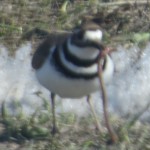 We were headed home when we spied not one, but two American Kestrels hunting from a wire on the opposing side of traffic of the four-lane we were on.  So we did some driving around and found ourselves on that side of the road to get a better look.  Evan claims this is a life bird even though I know I’ve pointed it out to him last summer.  I’ve been seeing one during my commute to work, and he has wanted to see it badly, so this was a good find today.  It was so much fun to watch this bird hunt.  It would dive down to about 10 feet above the ground and hover like a helicopter for about 10 seconds on rapidly beating wings before pouncing on the ground!  We never saw it come up with anything, but it was pretty cool to see a bird hover like that. 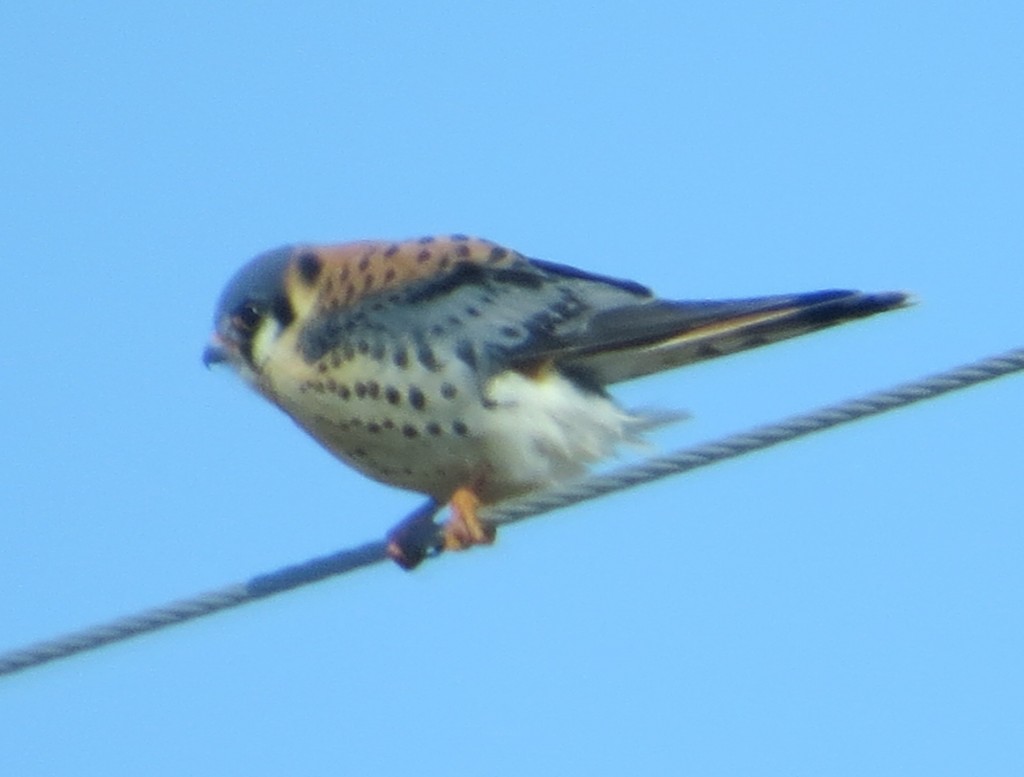 What will Evan’s 100th bird be?  Hopefully it’s something really cool.  I would bet it will happen by next weekend.

There are only so many “regular” ducks that come through our area that we are finishing up checking them all off our list.  Randy and Steve each know what we’re still looking for.  One of those was the Bufflehead.  Steve texted me saying they were on the lake this morning.  We headed in, but it was extremely foggy.  All we could see were blobs out on the water.  Bummer.

The haze hung on into the afternoon.  I needed to get a haircut this afternoon, so Evan and I went into to town together.  We’d try the lake one more time.  It was still pretty hazy, but at least we could make out bird species.  We got our Bufflehead lifer this time.  As I scanned the birds, a certain seagull stood out.  Normally I dismiss seagulls because the difference in species is so subtle, and I’ve never liked gulls.  This was something we had never seen – a seagull with a black head.  I snapped the best pictures I could to help me identify it.  There are a few species with heads like this.  It seems to combine features of a couple of them.  It was a life bird, for sure, but which one? 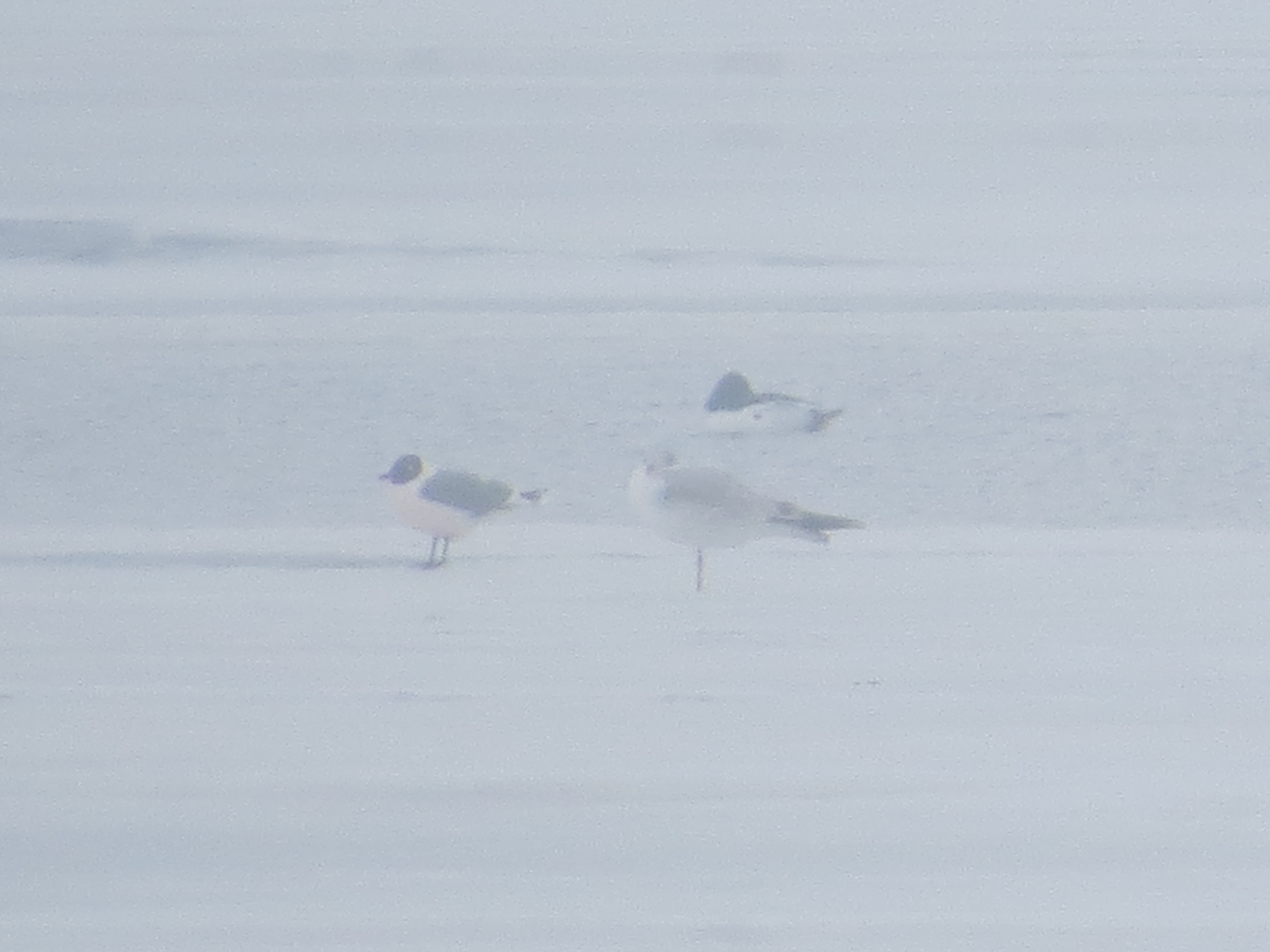 After our rare encounter with the Greater White Fronted Geese a couple days ago, Randy wanted to know of any lifers for us.  As novices, we may not know what is rare or not, and I don’t think he wanted to take the chance on missing something good.  So I called him up.  No answer.  I got home and emailed him the pics.  Within minutes he said he was heading out with his spotting scope to investigate.

He called me later, and said he found the gull and watched it.  However, he didn’t know what it was.  He saw it fly and dismissed the possibility of a Bonaparte’s.  He was going to study his books some more and perhaps send the photos off to some gull experts he knows.  So, we found something good, but what is it? Steve and I are leaning Franklin’s Gull.  What do you think?  For now, we just have to wait.