What’s a Garganey?  What’s ABA Code-4 Mean?  How the heck do you pronounce “Crex” and where is it?  First off, a Garganey is a Eurasian duck that means it normally resides in Europe and Asia.  Yes, Europe and Asia.  It’s true; I looked it up in Evan’s field guide to birds of Europe.  Every now and again, one finds it’s way into North America.  Kaufmann’s Field Guide to Birds of North America calls it a “very rare” visitor.

But it does visit occasionally and sporadically.  Do you see that line in Kaufmann’s entry that it “might show up on any marshy pond, especially in spring”?  That is the best line in any bird book – ever.  That gives anyone living near a marsh or pond the eternal hope that one day, one just might just stumble across this rare, exquisite duck.  That’s good news for us birders on the prairies of Minnesota.  It’s a fact we tuck into the back, deep recesses of our minds as we go out and scan waterfowl every spring.  In fact, this thought came to mind just last week as Steve was headed out birding one evening, and I couldn’t join him. Being always hopeful and having found my own rarities recently, I told him to go find us a Garganey.  He dismissed my green-horned wishful thinking with a bit of sarcasm – all part of good birding fun.

But back to that second question, ABA stands for American Birding Association, and they have a numerical system to indicate just how rare a bird is.  The highest rating given to the most rare birds is ABA – Code 5.  So a Code 4 is a big, big deal.  It’s a drop-everything and go deal. It’s a Wisconsin state record sort of deal.

And pronouncing “Crex”? Well, let’s back up and talk about Friday night first.  Late Friday, a vigilant birder who resides in the Los Angeles area and has birding ties to Minnesota and Wisconsin and monitors both states’ listservs and Facebook groups, made a shocking post on MOU-net – a male Garganey had been found just a few miles across the Minnesota border in Wisconsin at the Crex Meadows Wildlife Area!  Moreover, this was only 2 hours and 45 minutes away.  2 hours and 45 minutes!  I can’t even get to the Sax-Zim Bog that fast.  My mind was spinning and my guts were churning.  Never mind that I was coming down from an adrenaline rush of another successful rarity chase earlier that day that caused me to get a sub and dash out of school early. (That’s a story for another post).  Well, I’ve already done a lot of birding and a lot of irrational birding lately, so I was really wrestling with the thought of dragging the family to Wisconsin to see a once in lifetime bird…a once in a lifetime bird.

I shook it off and instead went birding early Saturday morning at the Atwater sewage ponds before the family was awake.  I wasn’t going to let birding take over my day.  I had to contain the beast. But then I had another incredible discovery that morning of solitude birding that brought the birding adrenaline back with a vengeance (Yet another story to come later).

As I was mopping up the reporting and documentation of my find, the birding landscape was exploding around me bringing in incredible reports.  Not only were people still seeing the Garganey, but now a Cinnamon Teal shows up 45 minutes away, a mile or so from my Uncle Larry’s house!  This was a chase that was the most logical to discard. We had seen a beautiful Cinnamon Teal drake up close in Arizona a month ago.  But, still, the proximity and the combination of being at my Aunt and Uncle’s house was gnawing at me. And it was a Cinnamon Teal.

Now I was fighting the adrenaline of two major life birds in the last two days and the bombardment of continued reports on the Cinnamon Teal and Garganey.  Then my phone rang.  It was Ron Erpelding, one of the state’s premiere birders who just happens to live in our county.  Ron told me that he had asked Joel and Randy if they were interested in going for the Garganey.  Both declined but told him that I had some interest.  Ron asked me if I wanted to go.  One of the state’s top birders asked me to go along to see – the Garganey.  I’ve never been along with Ron before. This had to be the pinnacle moment of my birding hobby.  The planets were aligned for the most incredible adventure I couldn’t have even imagined.

I think Melissa understood that this was a once-in-a-lifetime opportunity and gave her blessing for me and Evan join Ron.  And Evan wanted to go.  He was quite upset over the bird I saw without him on Friday.  The decision was made. We would leave Willmar at 6:00 AM on Sunday morning.  The calm sets in once the decision is made.  I was at peace as I got Evan to bed early and started prepping for the next day.  But the peace disappeared when I needed it most – bedtime.  I don’t think I slept more than a fitful hour or so.  The birding events of the past couple days and the possibility of what the next day held were wrecking havoc on my mind and robbing my body of rest.

I think I finally gave up on sleep and got out of bed by 4 AM to get the coffee going, take care of dogs, double-check gear, and go over maps and reports of other good birds at Crex Meadows.  Crex is pronounced like the cereal Chex, by the way.  Even though it’s in a state that has many French roots, it’s not pronounced “Cray.”  We know because we later asked at the visitor center.  Anyhow, I got Evan up by 5:30.  It’s never hard to wake him to go on these epic adventures.  Waking him on school days is another story.

By 6:00 AM we were loaded in Ron’s car and headed to the Badger State.  I think the birding talk started at 6:01 and didn’t really stop until we got home some 12 hours later. Ron has pretty much seen it all and is a treasure-trove of intel and stories.  Even the guy’s car is birdy – about an hour into our trip he turned on the radio for the first time and some program he regularly listens to on WCCO radio was giving bird feeder advice and highlighting recent migrant arrivals around different parts of the state.  Are you kidding me?

The only other sounds besides our bird talk was the incessant, pounding rain the entire trip.  It was an all-day rain.  It was not ideal, but when going after a Garganey, you can’t be too picky.  One thing that began to worry us as we drove was the noticeable lack of ducks anywhere.  Had the ducks moved out with the front?  It wasn’t a good sign, but as Ron said, “Nothing ventured, nothing gained.” True enough.

By 9:00 AM we made it to Crex Meadows.  It didn’t take long to find the correct spot – a marshy pool at the intersection of two roads.  It didn’t take a map to find it.  We could see the numerous hazard flashers of cars parked in a row on the side of the road as best they could with no shoulder.  That was a good sign.  We pulled in line and didn’t cut to the front.  The pool was still a couple hundred yards away, but we were parallel with a 10 foot wide ditch with about 5 feet of prairie grass separating the road from the water.  Seeing nothing, we wondered what was happening.  Finally we pulled alongside one of the cars and asked if they’d seen it.  The gentleman replied that the Garganey was here and that it was in the ditch right next to the cars!  We couldn’t see it because it was tucked up against the grass on the road side of the ditch.  Boy, were we giddy now.  It would just be a matter of time.  We got back in the line of cars and waited.  The rain was pelting the passenger side window like you wouldn’t believe.  We’d see a duck emerge, roll down the window to check, and roll it back up quickly after seeing a mere Blue-winged Teal or Northern Shoveler.  I bet I repeated this process 20 times.  My legs were drenched.  Ron could at least look out the windshield but at a bad angle through windshield wipers.  Evan was standing and on full-alert in the back.

All of the sudden Ron hollered, “I see it!” with all the excitement of a kid seeing Mickey Mouse at Disney World.  Ron caught a flash of the diagnositc head as it swam along the near side of the channel.  One down and two to go.  Now Evan and I were really straining to see it.  As our hearts thumped a little faster now, Ron was meticulously recording all the details of his 678th life bird with the same care and precision as doctors and nurses recording the details of a baby’s birth. 68 years old and lifer #678.  And this novice birder and his 7 year-old kid were on the verge of seeing it at any moment. Wow.

As Ron wrote, we were watching and watching.  Then it happened!  The duck swam into the channel giving us remarkable views even if it was raining cats and dogs.  It turned out our car was in prime position.  We had the best seats in the house as the bird was 20 feet out my window. Windows down, legs soaked, camera splattered – I didn’t care. I was snapping like crazy hoping for something, anything that would be decent.  But really, we saw the bird and that was incredible in itself.  Pictures were secondary. 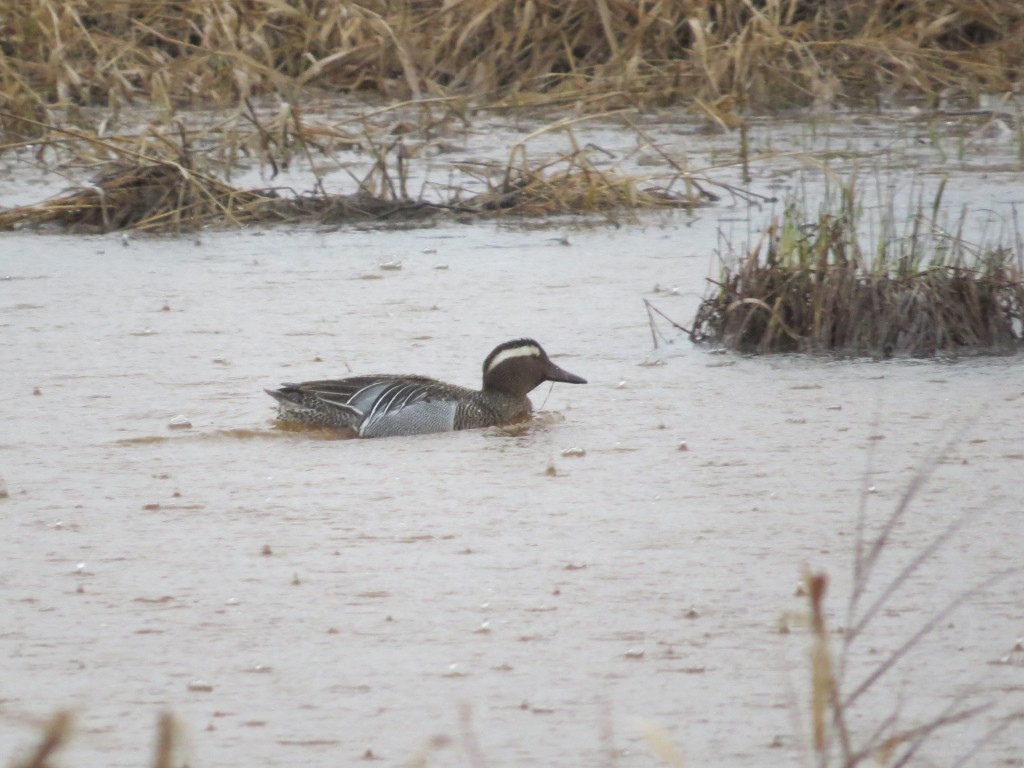 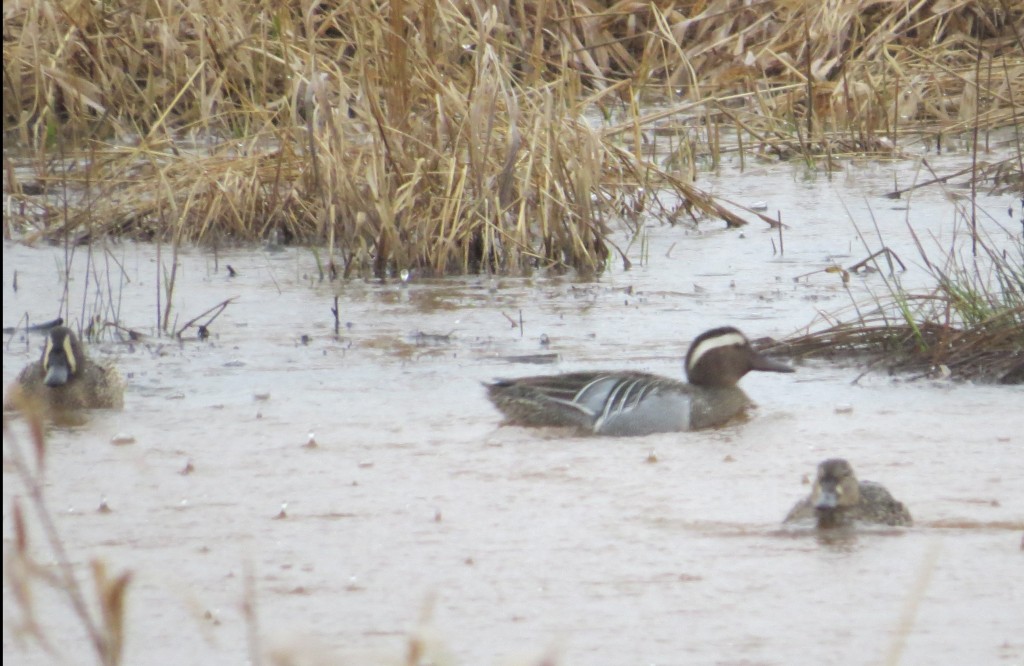 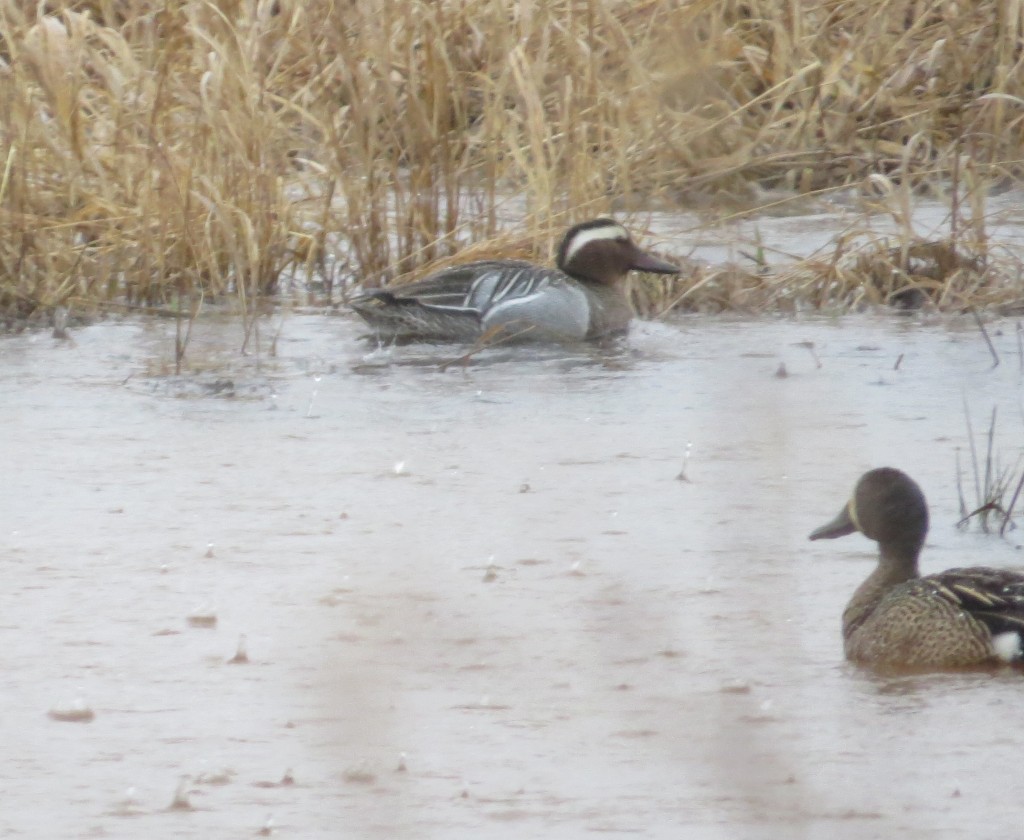 The excitement of everybody was palpable – and insane. 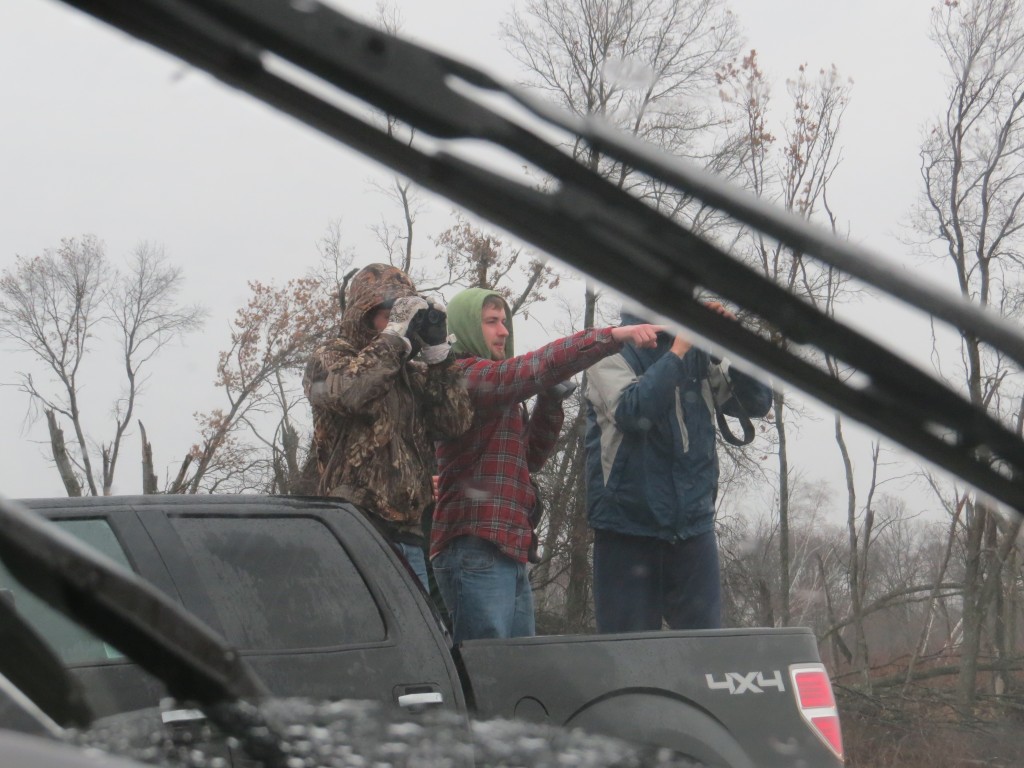 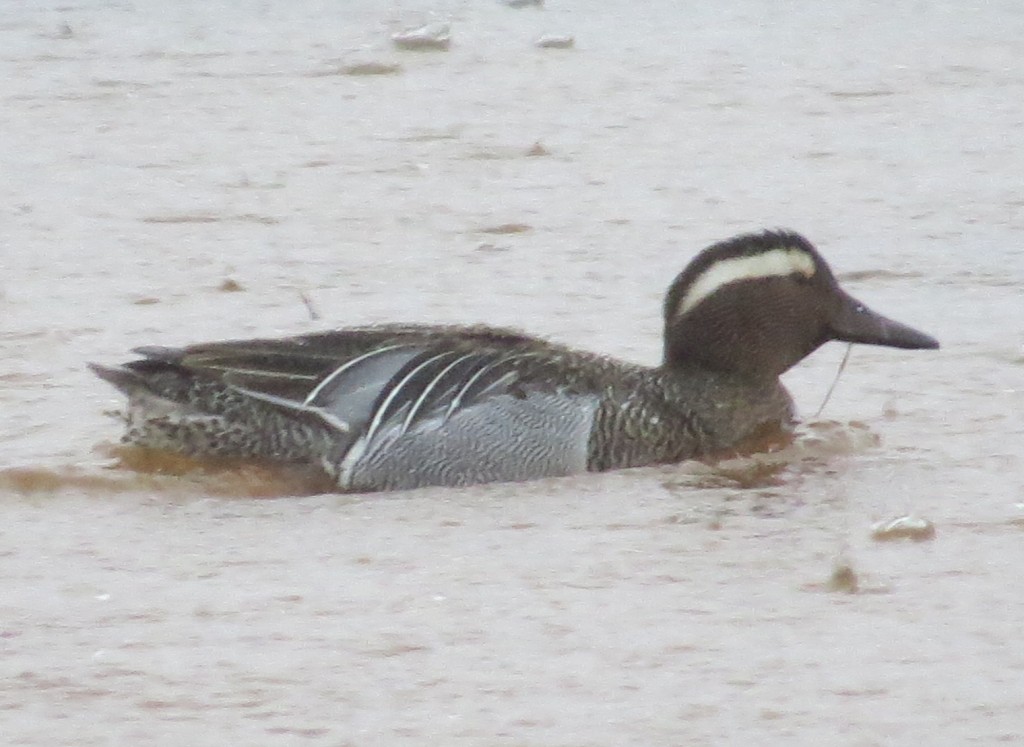 After getting my record shots, I waited for an opportune time to sneak outside with my umbrella where I could somehow do my best with the worst photography conditions possible.  In that time, though, the bird went out of view.  And in a matter of minutes all traces of ducks and birders disappeared.  It happened so fast.  I guess we all got our great looks at the bird and moved on.

We continued to explore Crex Meadows for a bit to hopefully turn up a reported Chestnut-collared Longspur and a Mountain Bluebird. No luck on them, so it was time to head back.  But, Ron is a county lister which means he tries to see as many bird species as possible in all 87 Minnesota counties.  Ron has averaged over 200 birds for each and every one of those counties, tallying a massive 17,000+ county birds.  His Toyota has 216,000 miles and his last car haad 238,000 miles.  Even so, the guy’s got holes to fill.  We spent some time searching for Greater Scaup and Canvasbacks in Chisago County.  I was the navigator and told to get us by some water. 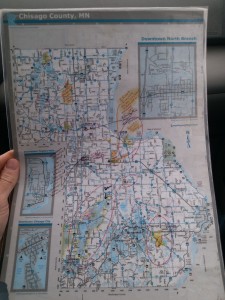 We missed on the Scaup and Canvasbacks, but we were delighted to find a concentration of 66 of our state bird, the Common Loon. 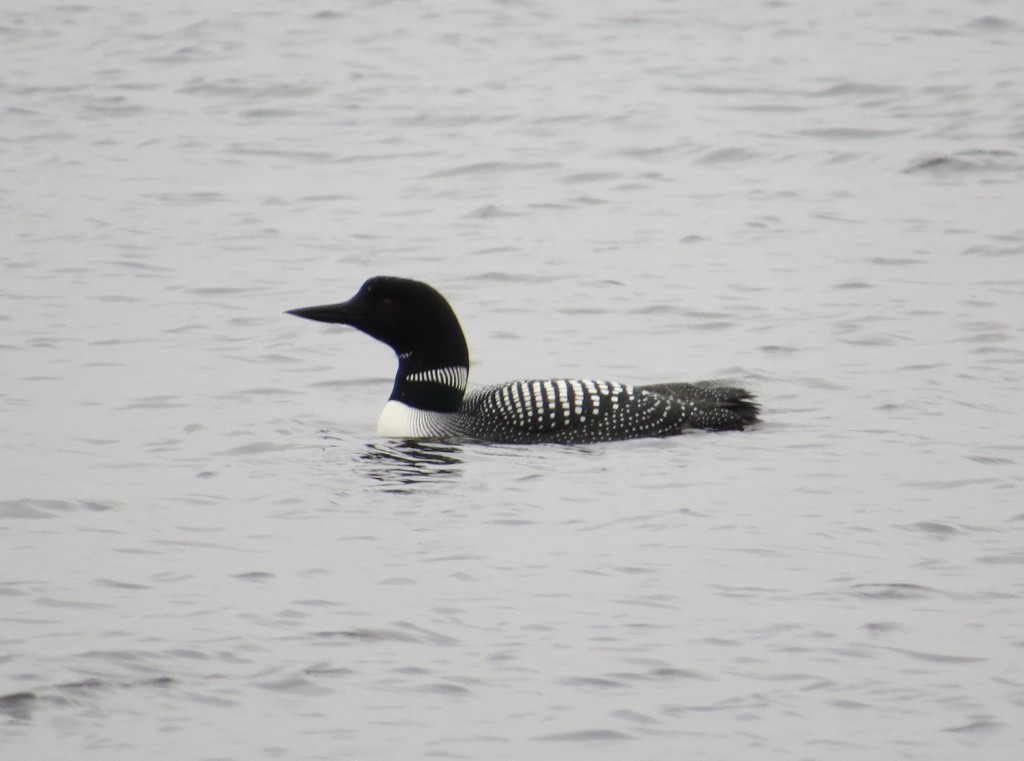 It was also good to be able to get out every now and then to stretch and look at birds. 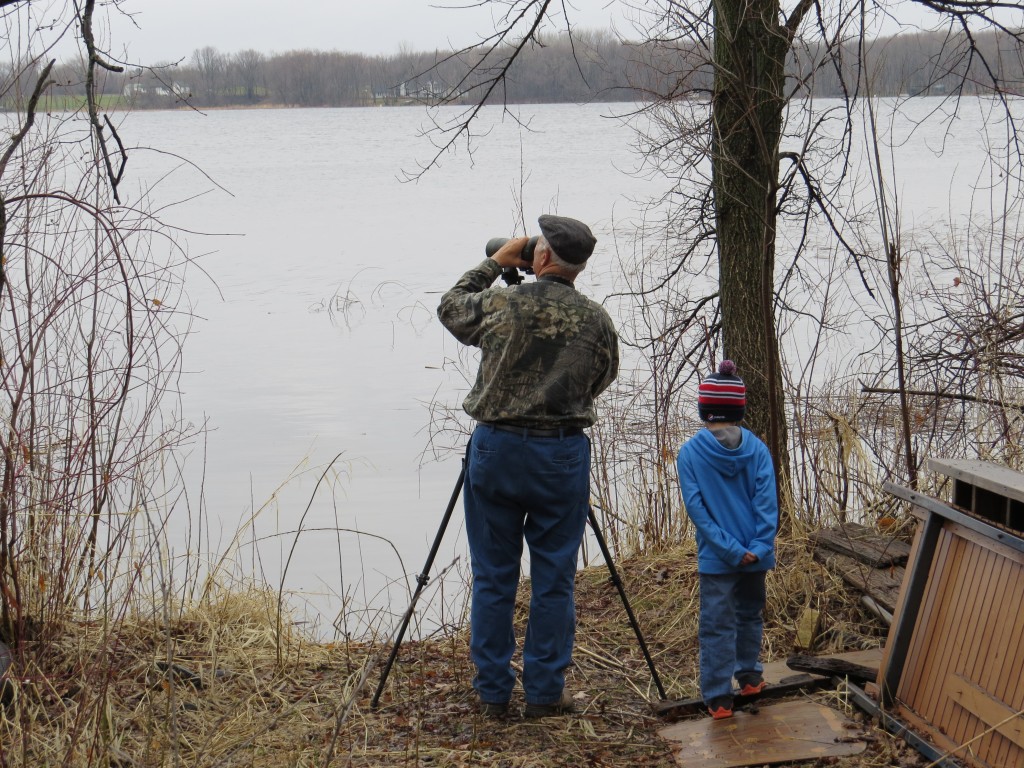 After several more stops, a lot of bird talk, and some very hazardous driving in the Cities in the downpour, we eventually made it home.  I could only be so lucky to see the Garganey again.  It was a bird and a trip of a lifetime. What a pleasure it was to get to know Ron a little better and go on a thrilling Garganey chase.