Seeing as how winter is very much still alive in Minnesota, I’m not that late in writing up a report from a late January trip to visit to Arizona. Over the years the Arizona trips and respective lifers have piled up. While there is no end in sight for the former, the latter is definitely petering out. The remnant that remains for me in central AZ is a geographically scattered bunch of birds that never made their way to the top of the wish list, heck, not even the top 10 on any given trip. Gone are the days of going after some cool Owl or Trogon. Instead I’ve entered the errand-birding stage for this area, finally going after some of these ‘nobodies’. Ironically, though, these passed-over birds have become some of the most coveted since they are all that remain for this junkie looking for his next lifer fix. In fact, the one I wanted most was Prairie Falcon.

We had just a couple hours of daylight after we arrived in AZ that first day. I couldn’t not take a stab at this lifer in the agricultural fields around Stanfield where some Prairie Falcons had been reported. Dad, Melissa, and Evan accompanied me on this little quest. Wintering raptors are ubiquitous in these flats with one on nearly every pole top. Time was diminishing quickly, so my identification of most of these birds was reduced to Hawk sp. Once I saw a raptor was a hawk, we got the car rolling again just trying to cover more miles and poles to get the good one. I may have been in a hurry, but there is always time for a road-side Burrowing Owl. 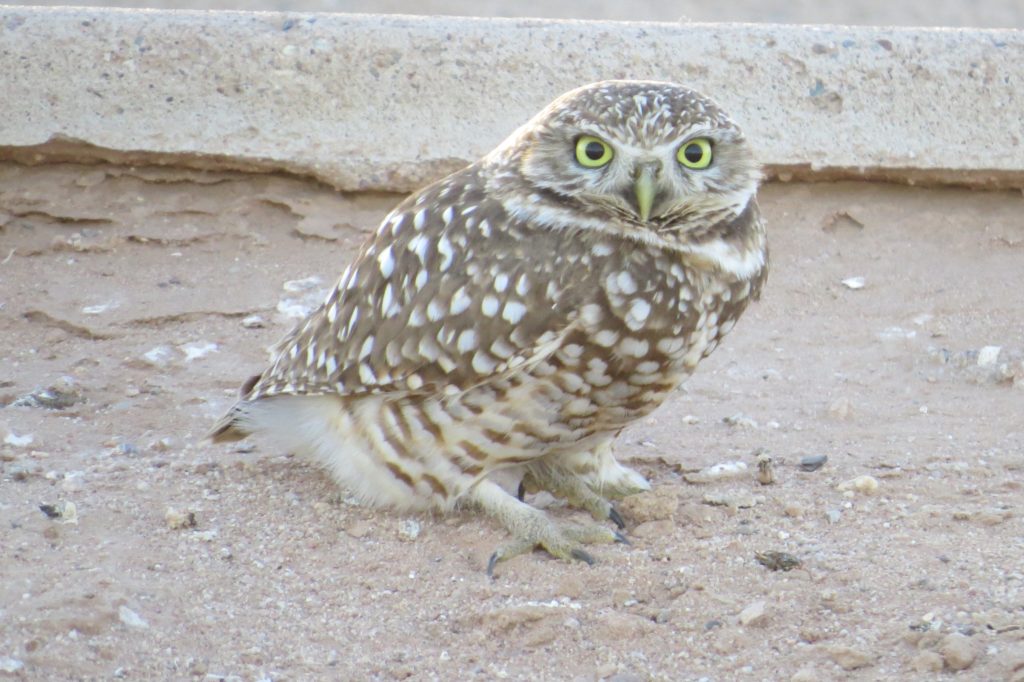 Finally, I found the sought-after silhouette at the eleventh hour. 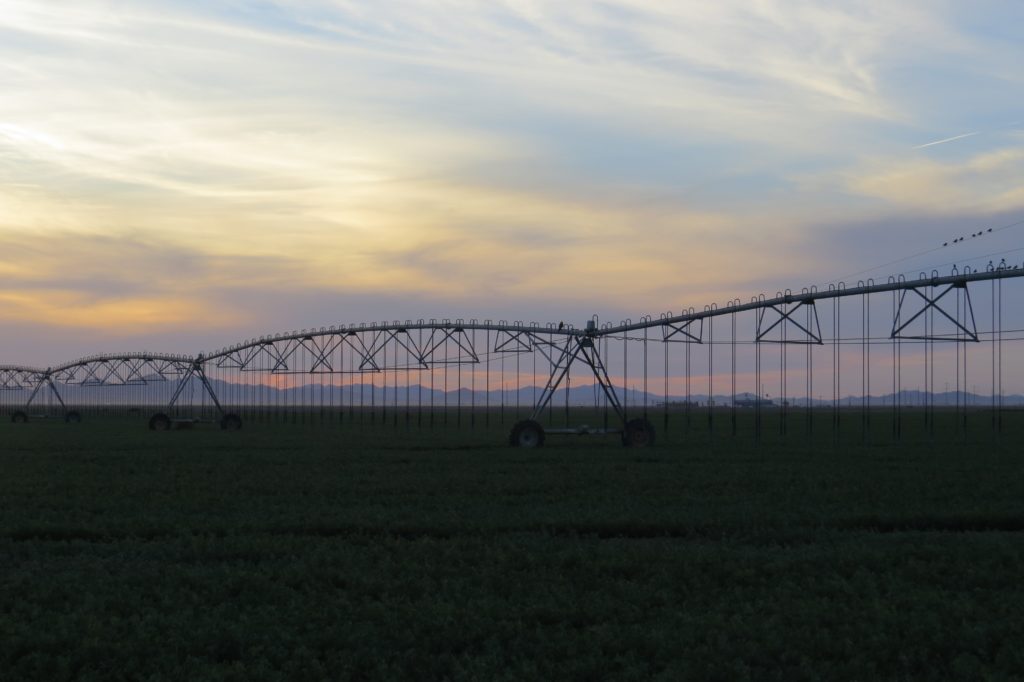 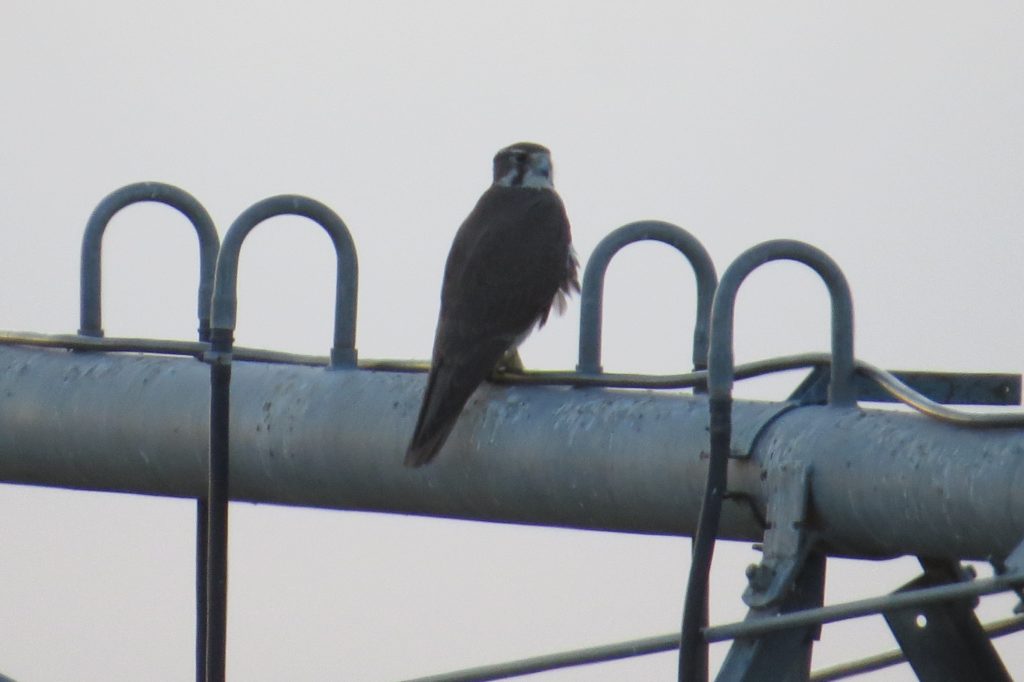 My clean-up operations are not haphazard–my strategy is to try to go after anything rare first and save the most common for later if need be. One of those rarities was the Rufous-backed Robin. This past winter was exceptional for this species with many records popping up in AZ. So that next day, my friend Gordon Karre took me on a mini-outing to stake out a gorgeous backyard in Paradise Valley to hopefully get one of two Robins that had been eating the berries of pyracantha bushes. The problem was that time and berries had run out for this particular Robin pair. We dipped.

So Gordon and I moved on to another target just a couple miles away before retiring the birding efforts for the day. The Bronzed Cowbird, often a forgotten possibility on all these trips, was now at the top of the queue.  Gordon and I found a known wintering flock in Paradise Valley at some horse stables. 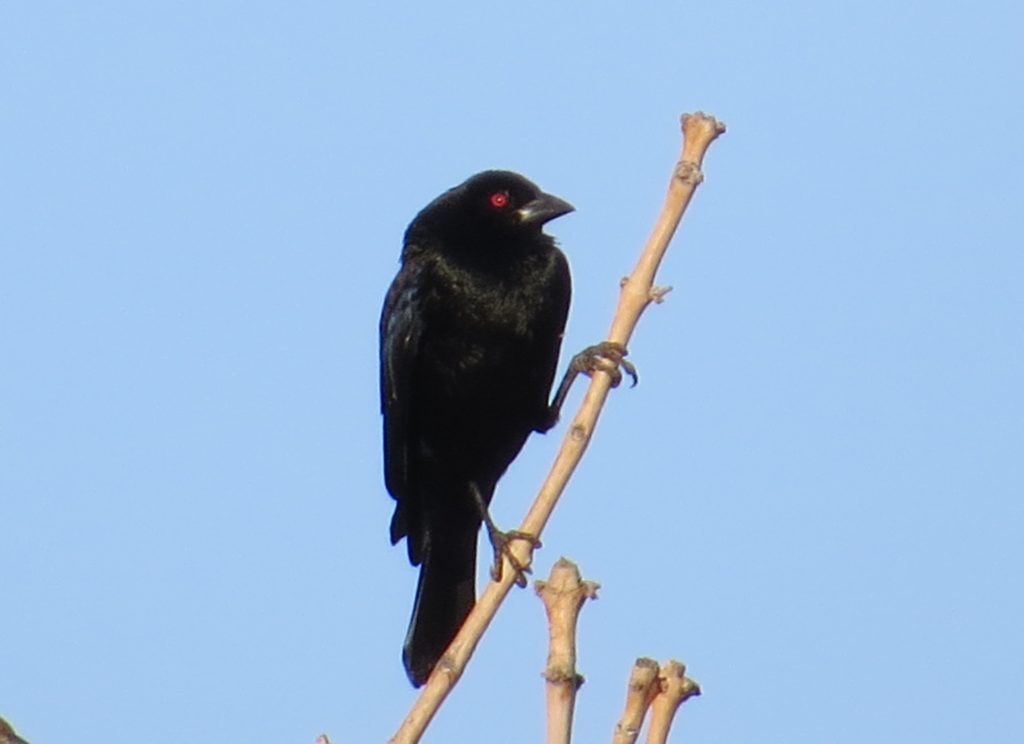 With that target achieved, the birding was put on hold until the next morning where Gordon, my Dad, and I would follow the same strategy–go after a key rarity and snag as many other lifers along the way. That rarity was the Ruddy Ground-Dove. Though we were going to originally go after one in the Phoenix area, it became a no-show just a couple days before the trip.  We were then forced to go south to the Red Rock feedlot where several had been seen.

Initially, we had trouble finding these birds as we drove the perimeter of the massive feedlot and scanned for birds. There were some interesting distractions among the droves of common birds–a Vermilion Flycatcher, Lark Sparrows, a flock of Yellow-headed Blackbirds, and this lovely female Lark Bunting. 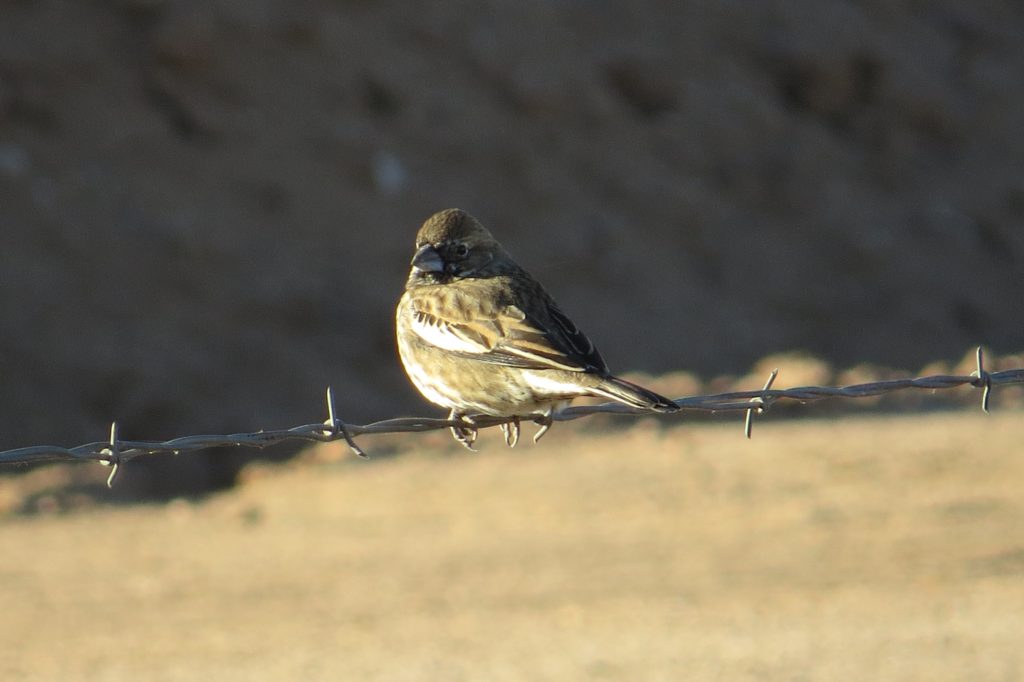 Finally we got on to the flock(!) of the rare Doves, finding five or six in all. Here are four of them with an Inca Dove that has identity issues, all huddling to keep warm on this chilly morning. 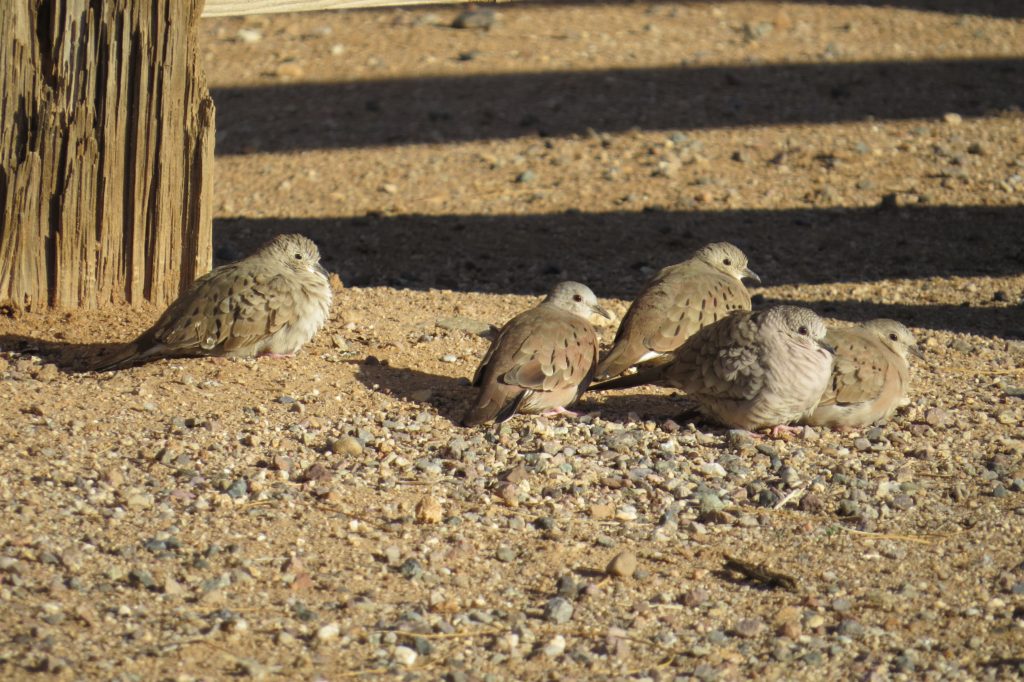 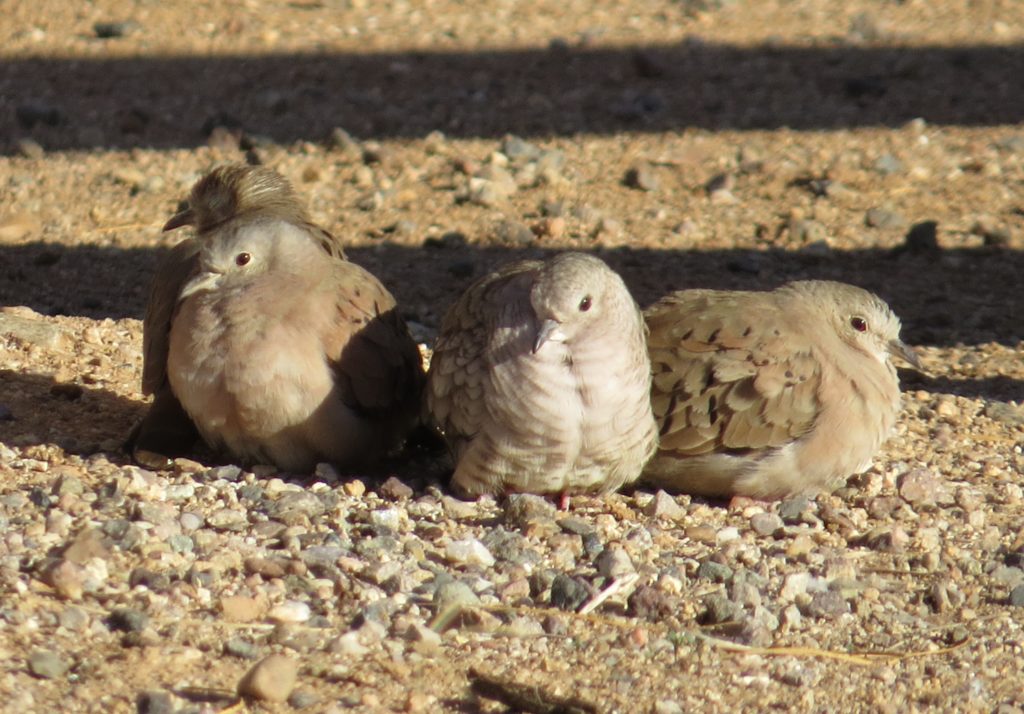 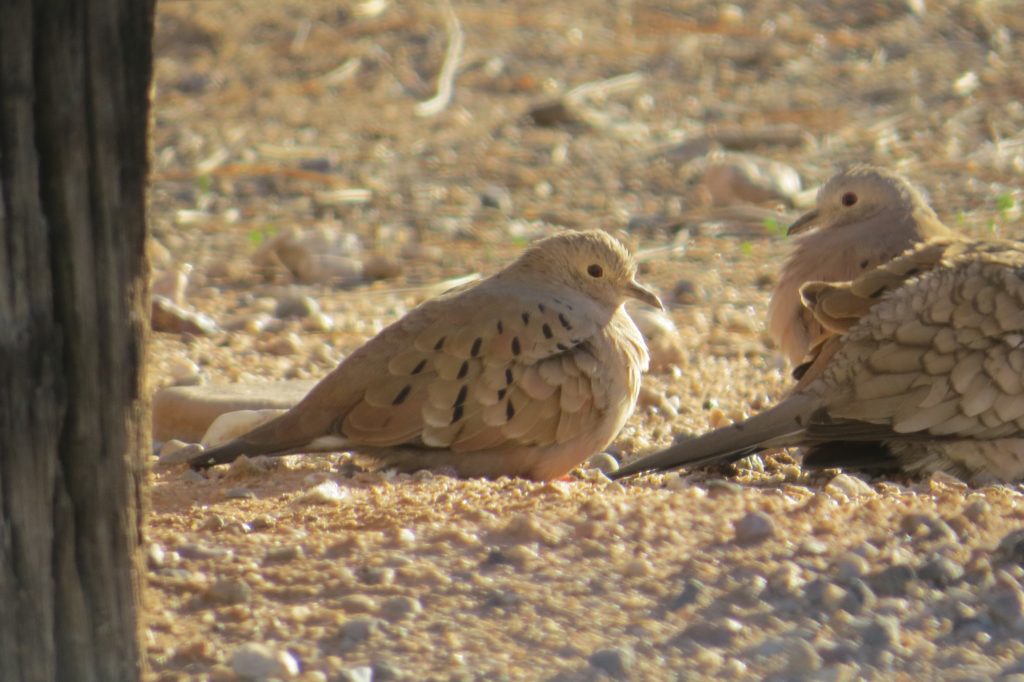 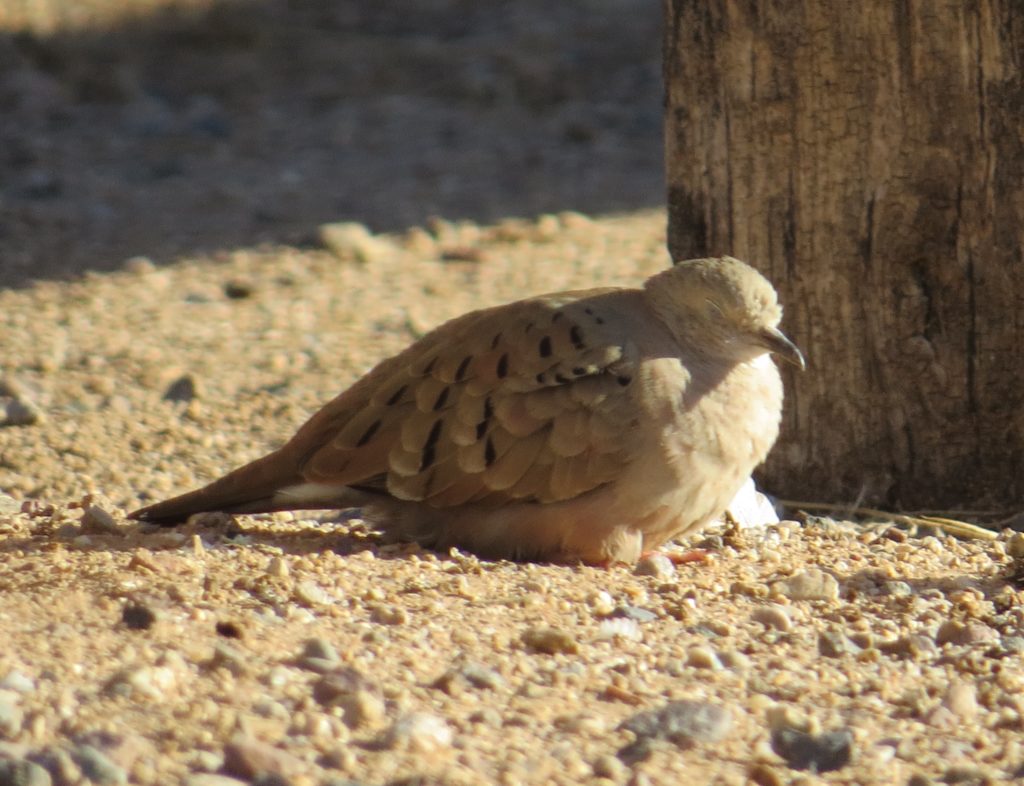 The plan was to cruise through the Santa Cruz Flats on the way home to try for two birds I had long been holding in reserve: Crested Caracara and Mountain Plover. The Santa Cruz Flats are fun place to bird where one can not only stumble across a Mark Ochs lifer but also see cool stuff like Harris’s Hawks. 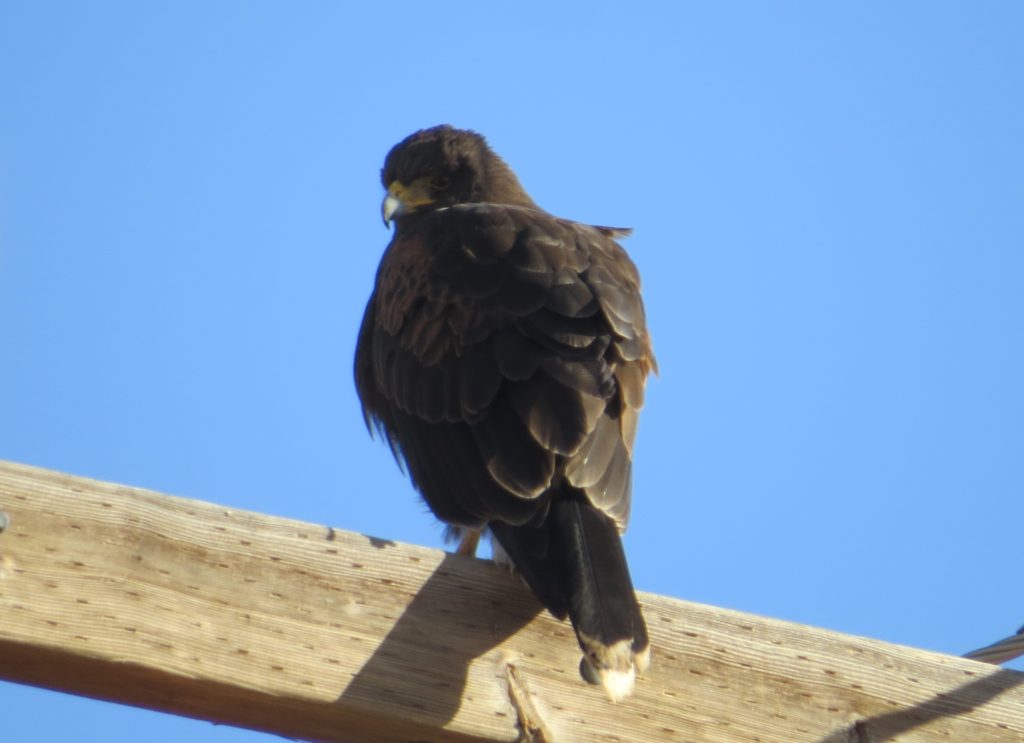 And a bonus Prairie Falcon. 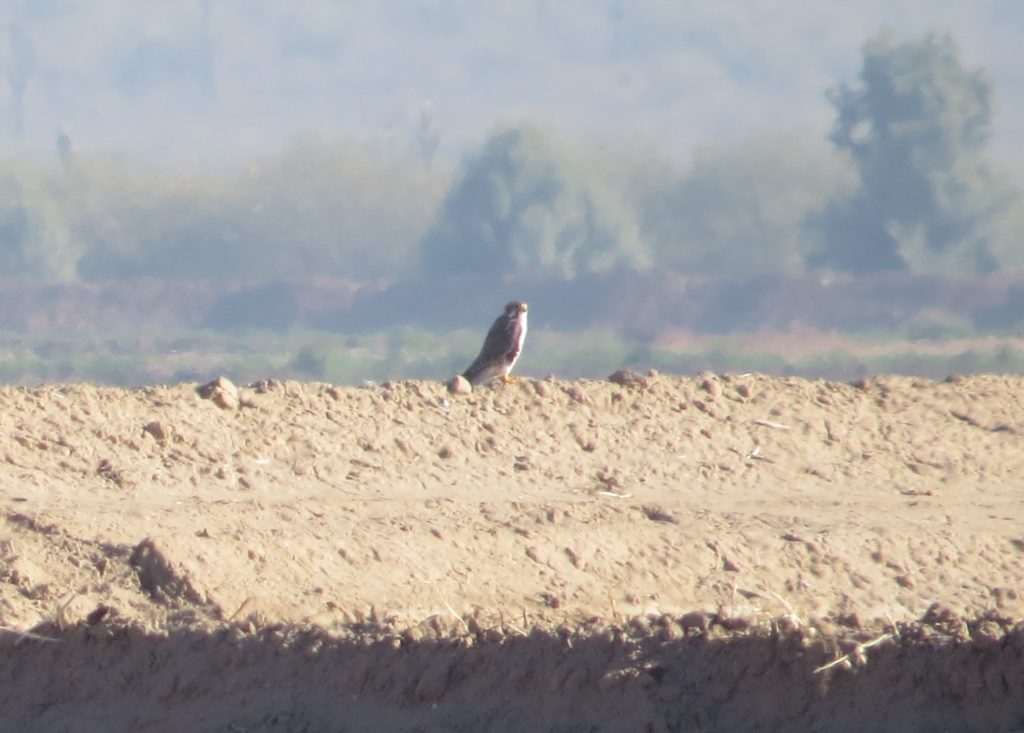 Then, thanks to our trusty guide, we finally got onto one of the two targets–a whole heap of Crested Caracaras. 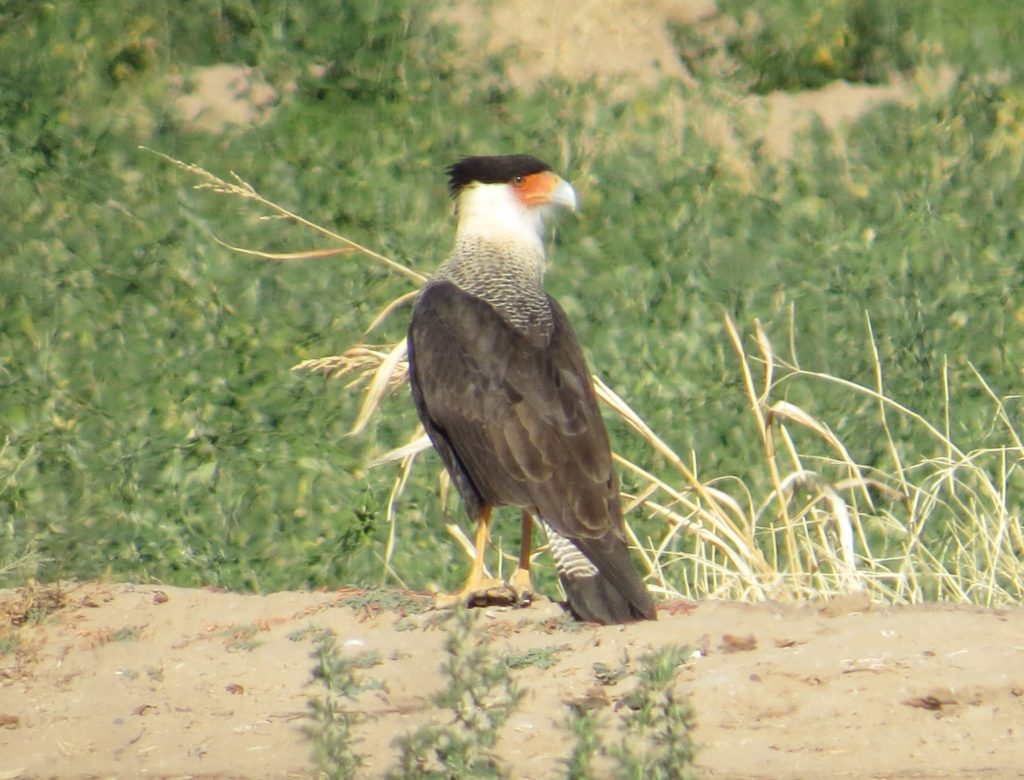 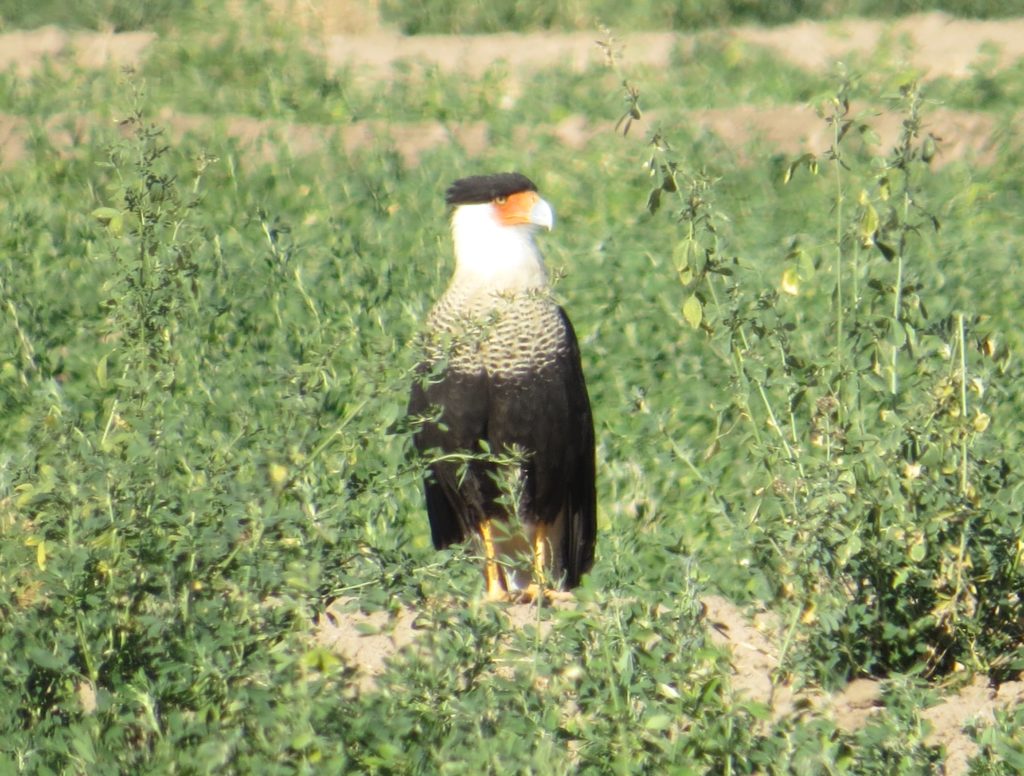 Not long after, Gordon had found us some Mountain Plovers. 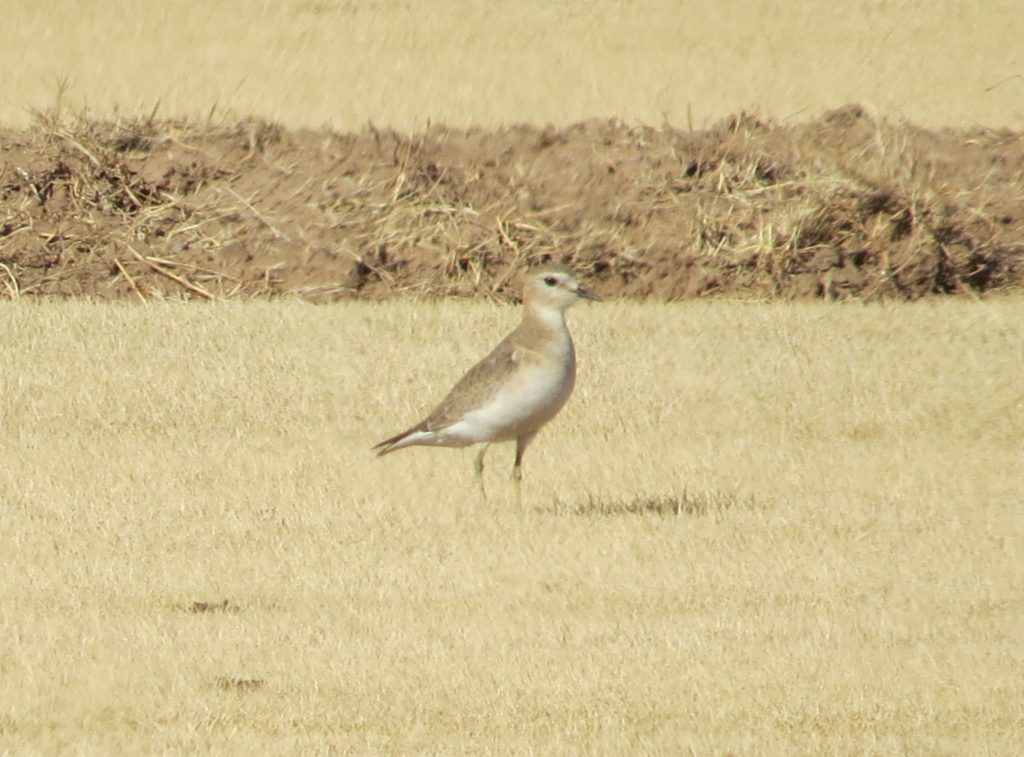 With some of the longtime holes finally filled in on the list, there wasn’t much to do on this trip in the lifer department especially considering our time was limited. Even still, the birds around the parents’ house provide just as much entertainment and constant opportunities for photo improvement. This year it was the Verdin’s turn for a better photo. 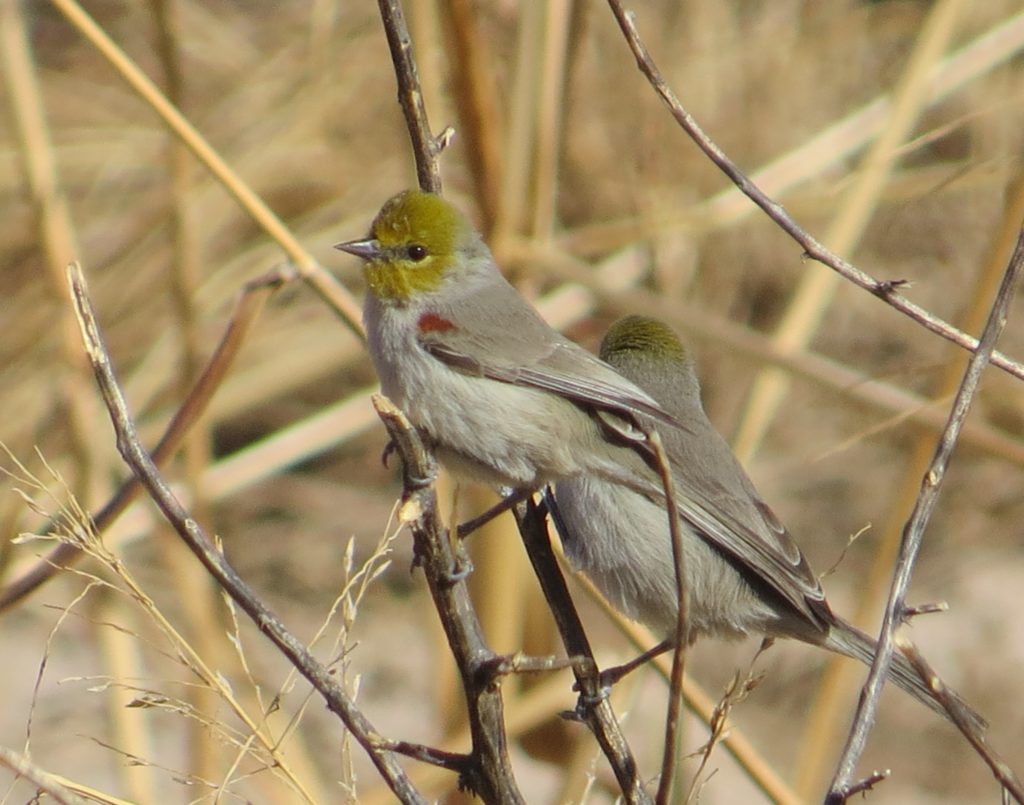 Some birds practically throw themselves at you when you’re just out walking in the neighborhood. Vermilion Flycatchers seem to be becoming more prolific in the area of Maricopa where Mom and Dad live. I don’t mind. 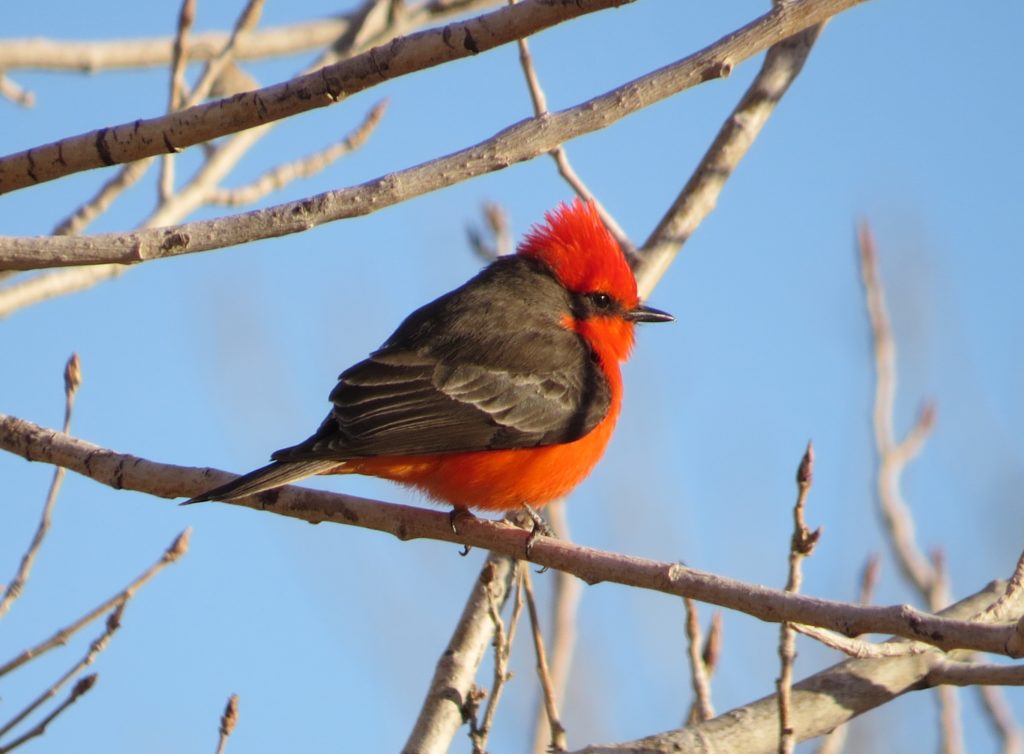 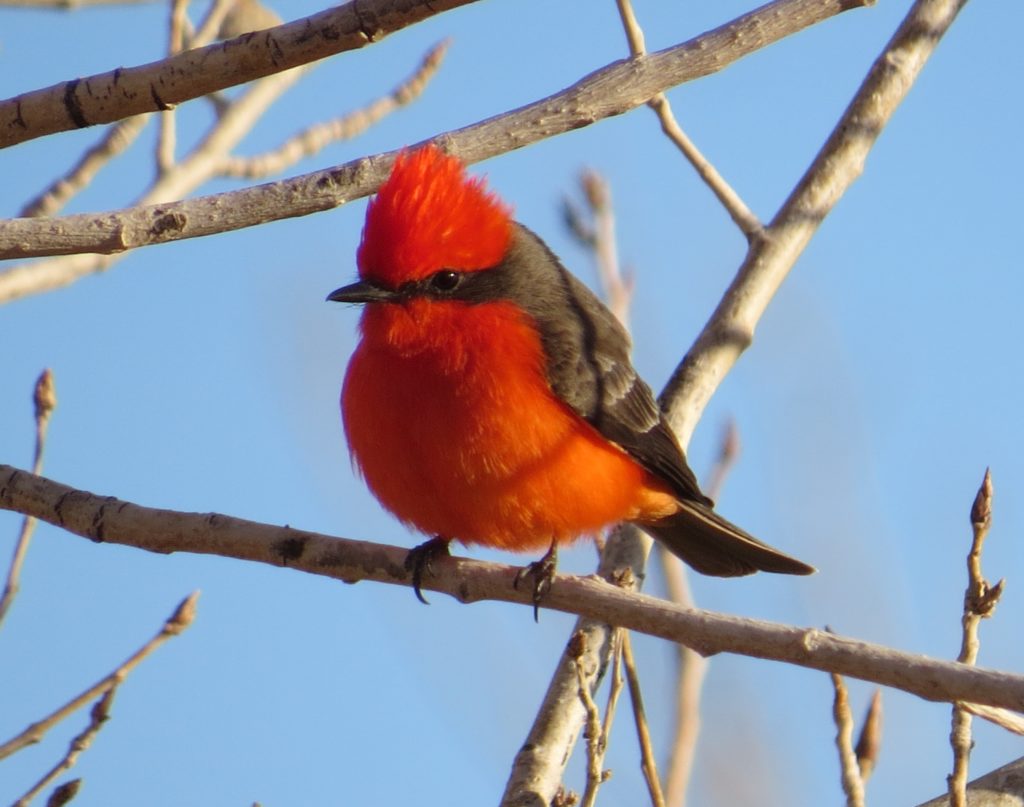 Last, but certainly not least, checking on our neighborhood buddy is an annual tradition. 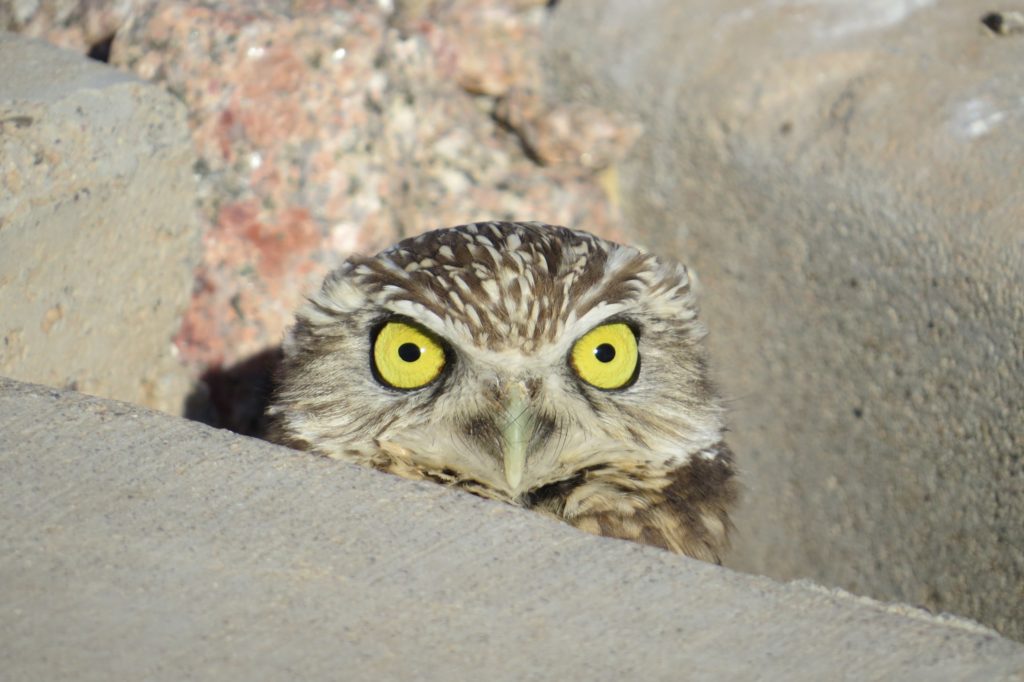 So that’s it from this trip. Pretty tame by previous standards, but that will more than be made up for on an upcoming post detailing another trip to Arizona that was focused exclusively on birding. But first, we have to cover another excursion to Duluth. There was an irruption going on this winter, after all.