In late August we headed home to northern Minnesota to celebrate my dad’s 70th birthday.  It was to be a casual affair with just my family and my brother’s family in attendance; understandably, my sister just couldn’t make it from Nigeria.  Nonetheless, it was still a good excuse for us Minnesotans to gather together.

One of the things my mom insisted on doing was taking everybody out for a pontoon ride on Lake Vermilion.  She had her own target bird that she wanted to show us all. Apparently my folks had been out on the lake recently and ran into a whole pile of Bald Eagles, dozens of them all in one tree.  Secretly I wasn’t too excited about Bald Eagles. The allure has long worn off as I have frequent run-ins with this bird that has now become ubiquitous.  We birders can become quite snobbish about our bird species. Nevertheless, the kids would certainly enjoy getting out on a boat. Though I grew up on the water, they do not get this kind of opportunity very often.  So a pontooning we would go.

We launched at Peterson landing and set out across Wakemup Bay to the cluster of islands around the larger Taylors Island. 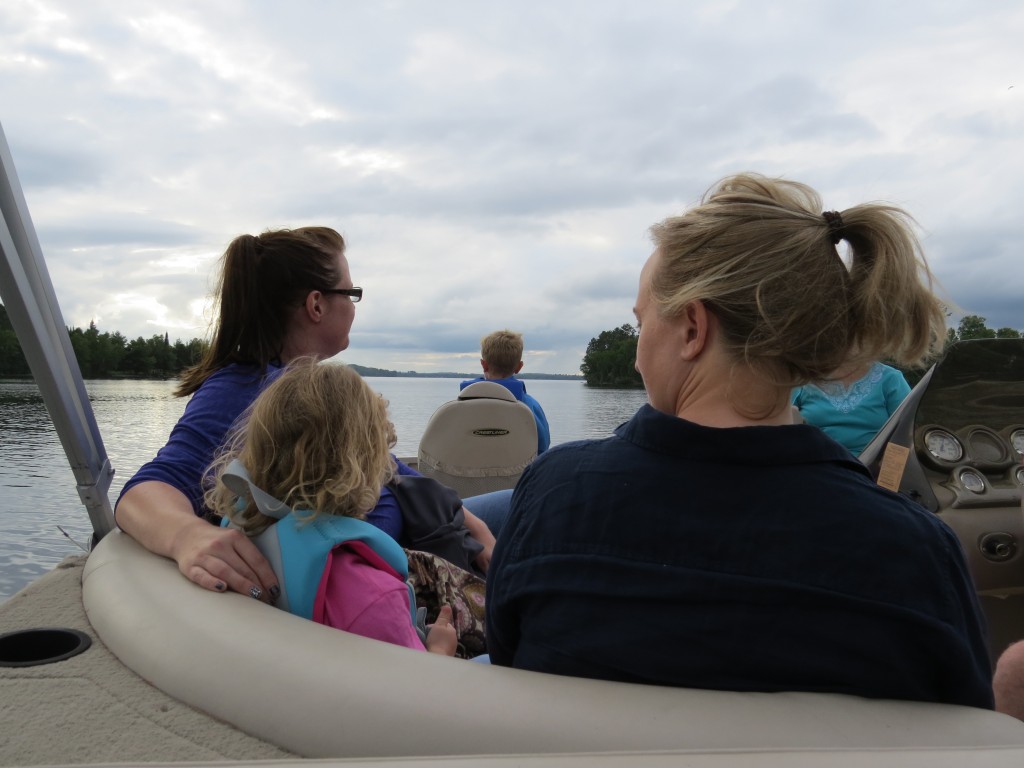 Here, the small channels between the islands provided relief from the wind, and many birds seemed to thrive in the smaller waters.  One of the birds fishing in the calm water was none other than our state bird, the Common Loon.  I will argue that we have the best state bird in the nation.  Its beauty, its haunting call in the middle of a calm night, and its affinity for our scenic lakes make it a fantastic choice for our state’s bird ambassador. 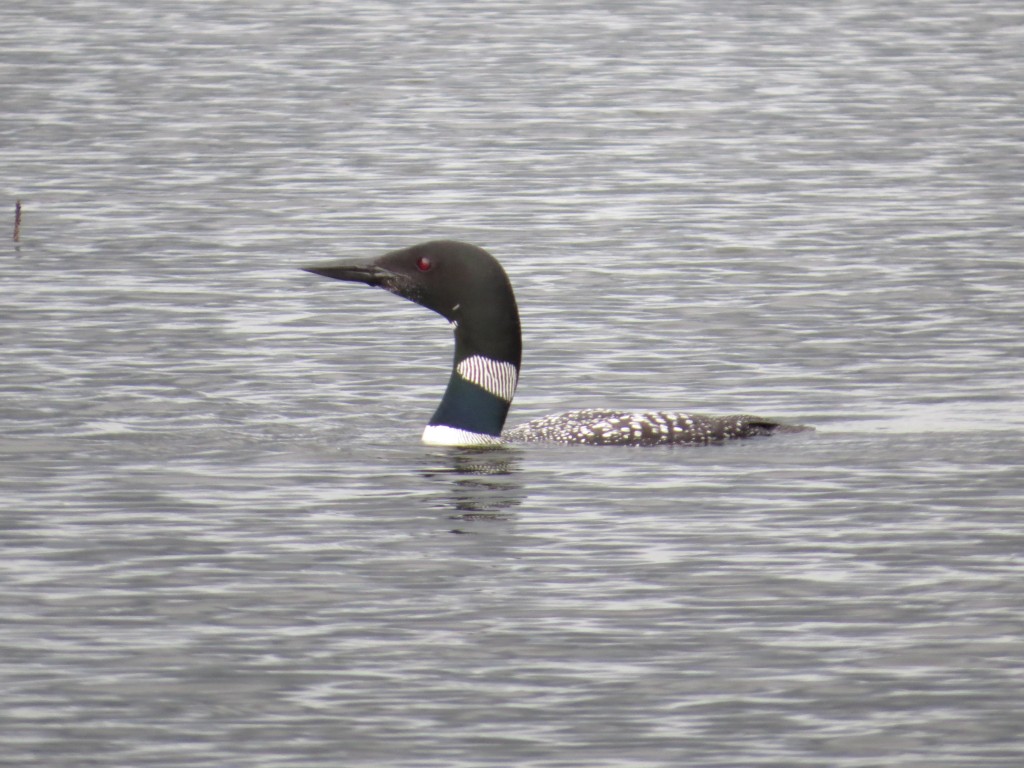 Common Loon, a.k.a.  just a “loon” to Minnesotans

We saw several loons, a bird that is even more common on our waters than the Bald Eagle. But it didn’t take long for mom’s target bird to dominate the show.  We spotted a nice mature bird in a White Pine. 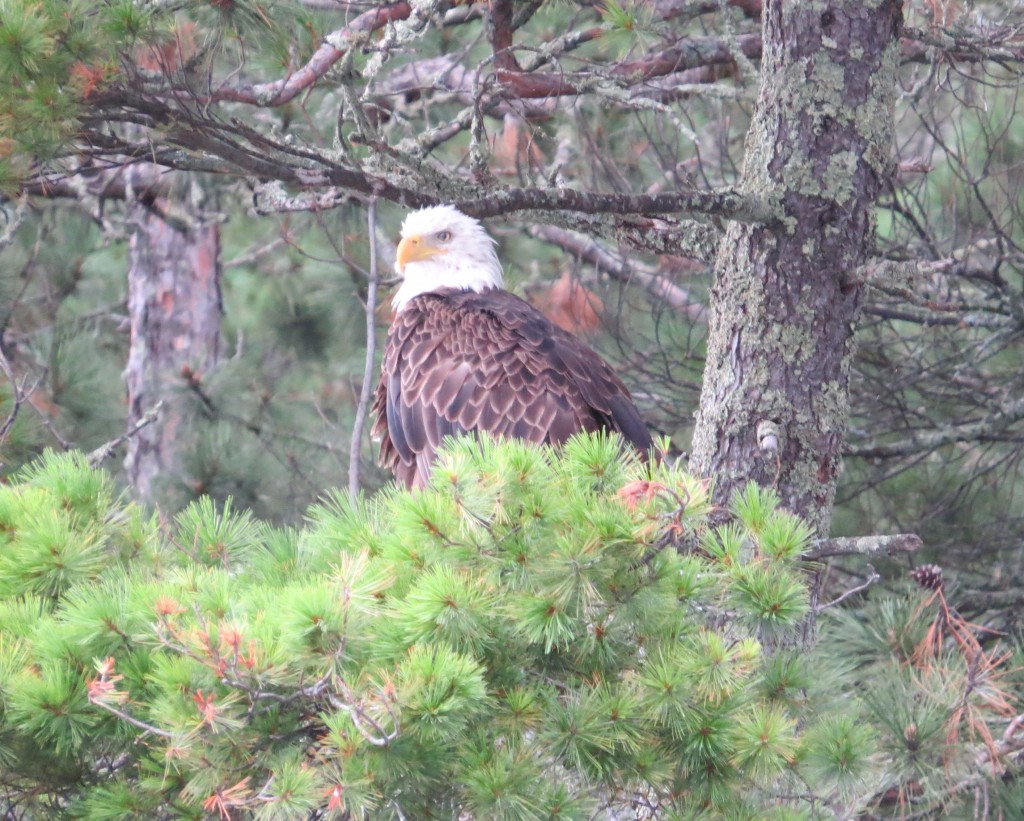 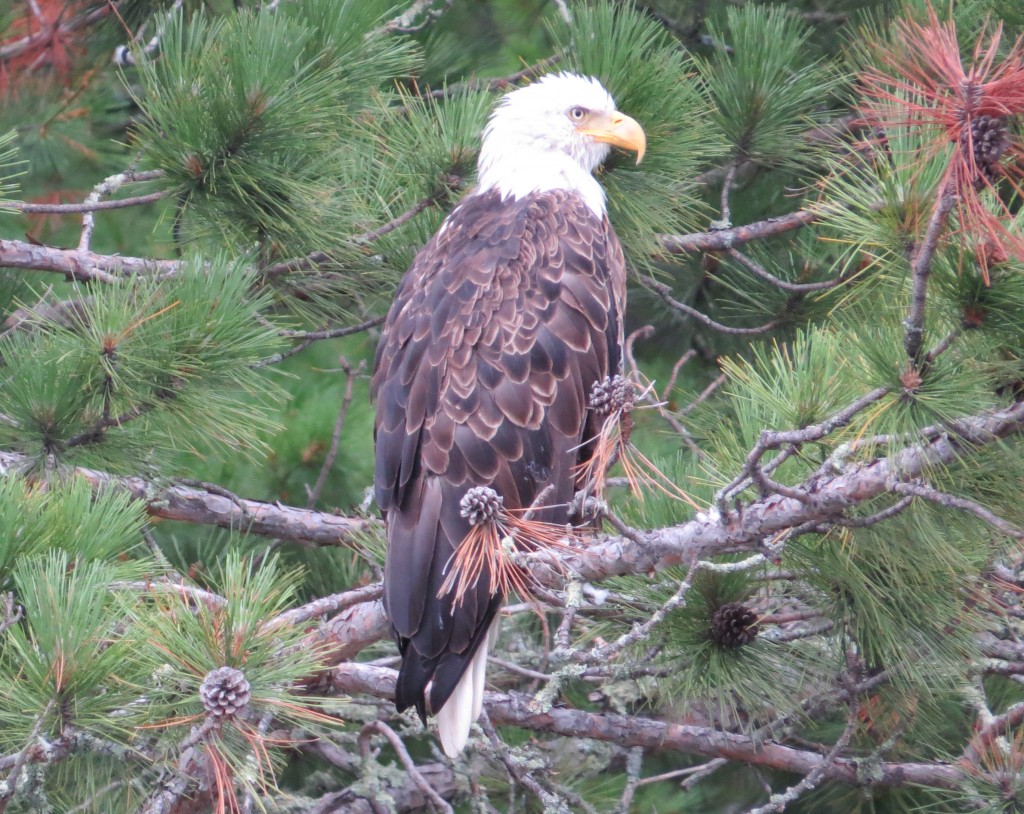 We cruised right along the shorelines of the islands and passed right under many of these birds as they watched from above.  Some would take flight; many others did not care.  The kids were, by far, the best and most enthusiastic about spotting our national bird. 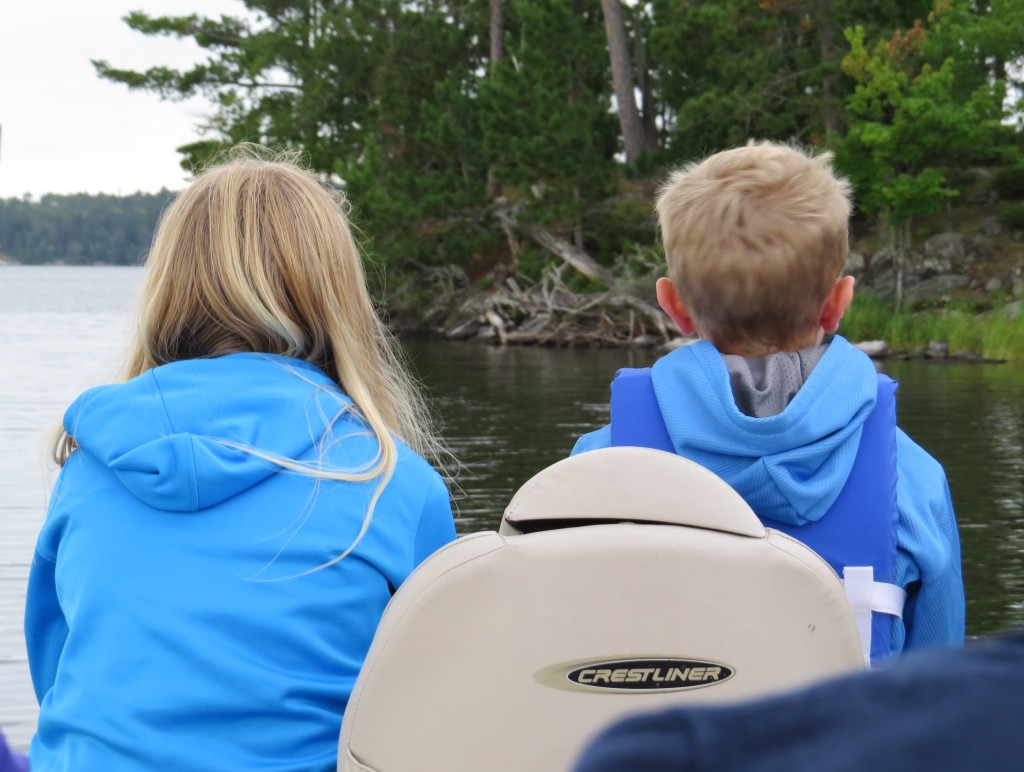 Evan and cousin Iris scanning the trees for Bald Eagles

They were so good at finding them that I hardly had a chance to find my own.  They would be pointing and yelling.  Just as my eyes would find that one, they’d pick out another one hiding high in the boughs of some pine.  Each time I wondered how such massive, obvious birds were evading my eyesight.  Even Grandma (mom) was on to them.  Now my birder pride was on the line. 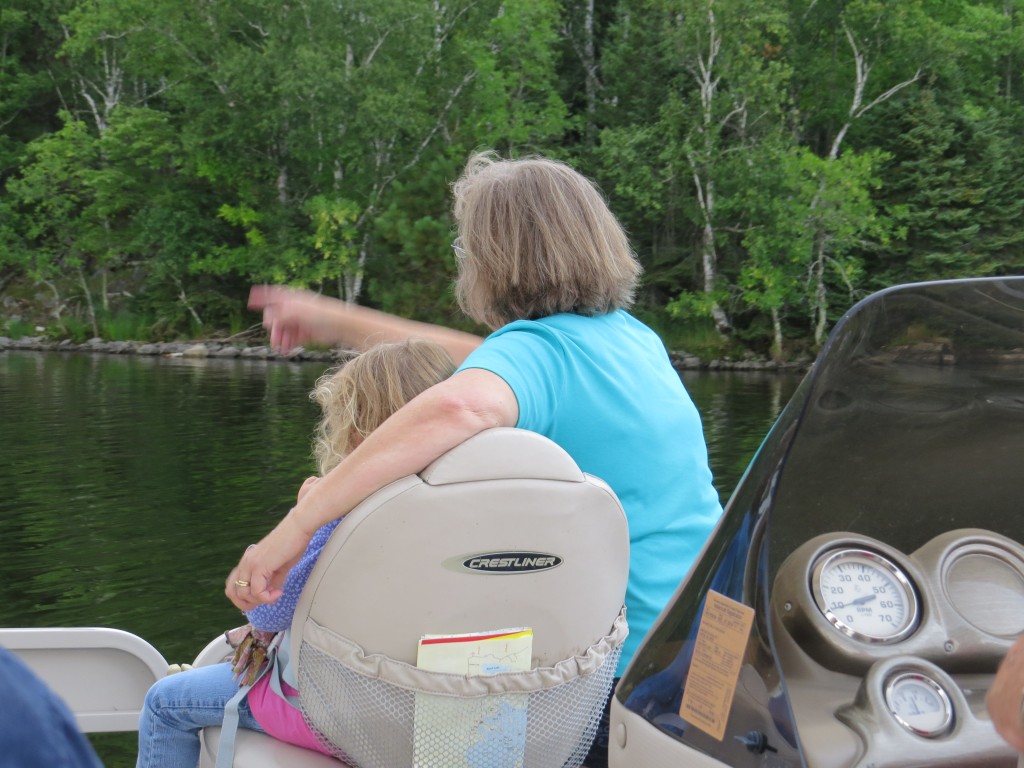 They were absolutely everywhere.  In fact, I lost count but I’m guessing we saw close to 20 Bald Eagles, only one of which was an immature.  I was able to finally spot one or two myself. 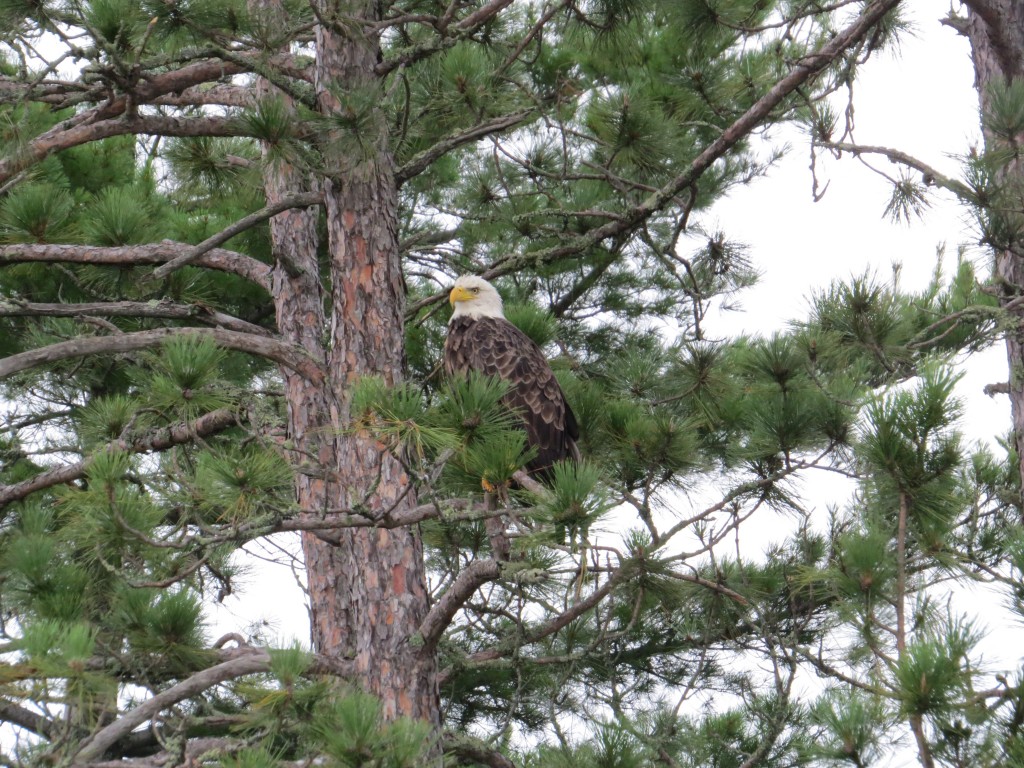 The birds were so plentiful that I never asked Dad to stop the boat so I could take pictures.  All of the above were taken while in motion.  Had we stopped for pictures, we would have been navigating Lake Vermilion in the dark!

Seeing all these birds was an experience the whole family got caught up in.  To add a little more bird flavor to the outing, many exclamations were made over Great Blue Herons hunting from the shorelines and Turkey Vultures gliding effortlessly overhead. Personally I found dozens of migrating Common Nighthawks to be the most exciting. Even the cooler, elder Bro took notice of a low-flying vulture and said, “That’s pretty cool.” 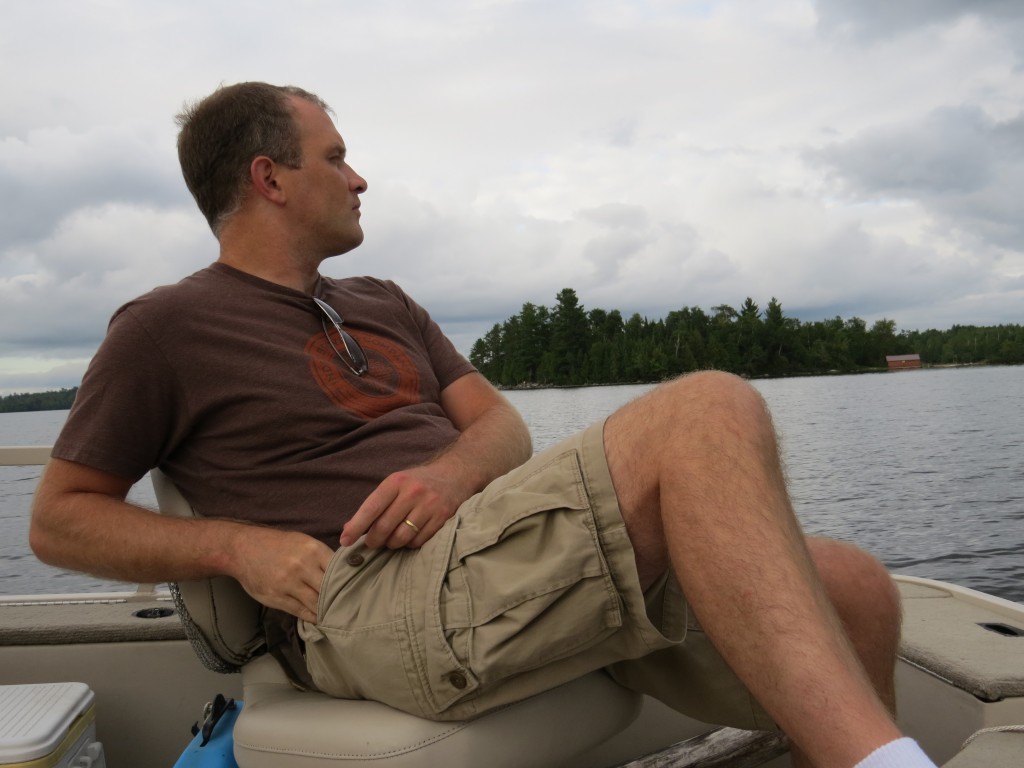 The more eagles we saw, the less jaded I became to them.  It truly was an amazing experience to see such an abundance of them.  The kids’ enthusiasm was quite appropriate.  It was fun to see Evan excited over this bird even though he’s seen it plenty.  He doesn’t get fired up over little brown lifers like Winter Wrens, but he still takes childish delight in the birds that are just plain awesome. And rightly so.

Inwardly I was remarking about what a comeback the Bald Eagle has made. According to the U.S. Fish and Wildlife Service, there were only 487 nesting pairs in 1963.  Dad, a wildlife biologist during the 1970s, was telling us how the widespread use of DDT got into waterways and poisoned the birds’ food supply, causing them to have weak eggshells and ruining their nesting efforts.  Of course the shooting of eagles and lead poisoning also contributed to their drastic decline. 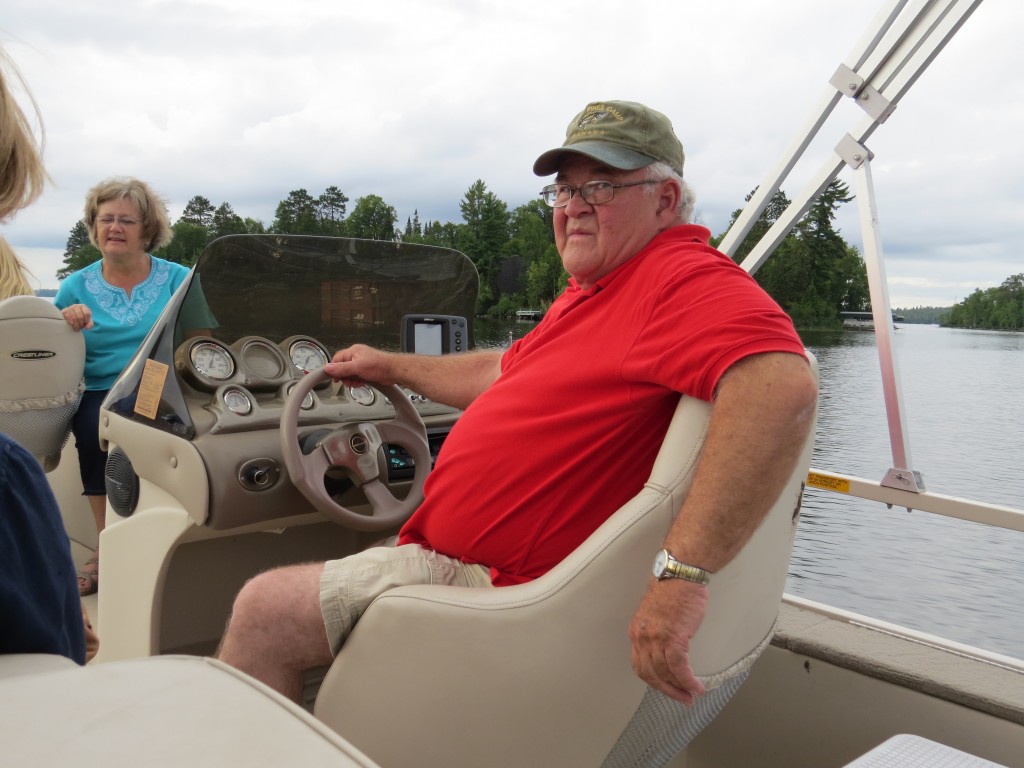 Though the bird had been listed as endangered by 1978 in all but a few of the lower 48 states, it was only ever classified as threatened in Minnesota.  Even still, they were regarded with special concern and protection here – Melissa remembers camping at Bear Head Lake State Park with her parents in the mid 1980s and seeing the entire beach area roped off to keep people away from a nesting pair.

The Bald Eagle has made a remarkable comeback reaching nearly 10,000 nesting pairs and thus being removed from the list of threatened and endangered species in 2007. Here we were witnessing the fruit of this wildlife management success story.  Ok, Mom, Bald Eagles are cool. Really cool. 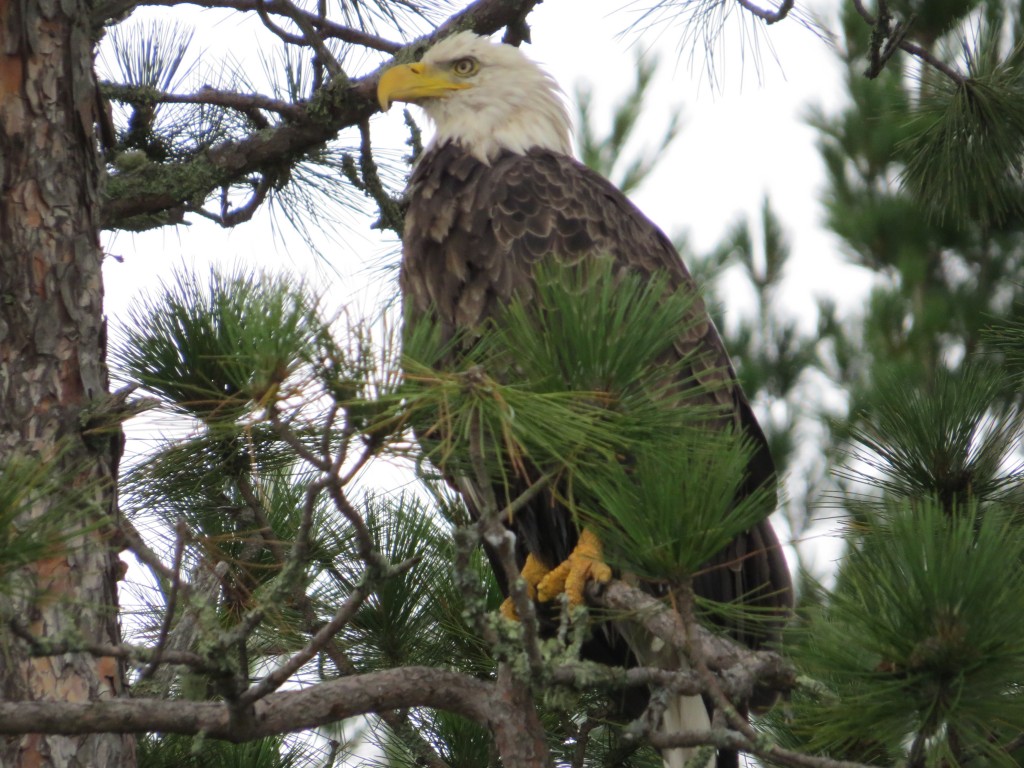 Considering the Bald Eagle’s history, it was fitting that three generations were enjoying this bird together.  The past. The future.  Certainly lessons learned by previous generations coupled with memorable, childhood experiences of the newest generation will lead to a strong future for the Bald Eagle and the multitude of other bird species that are on the brink of disaster like the Bald Eagle once was.  I’ve had the good fortune to see such species, like the Cerulean Warbler or the state endangered Chestnut-collared Longspur.  Some day I hope we are swimming in them like we were on this day. 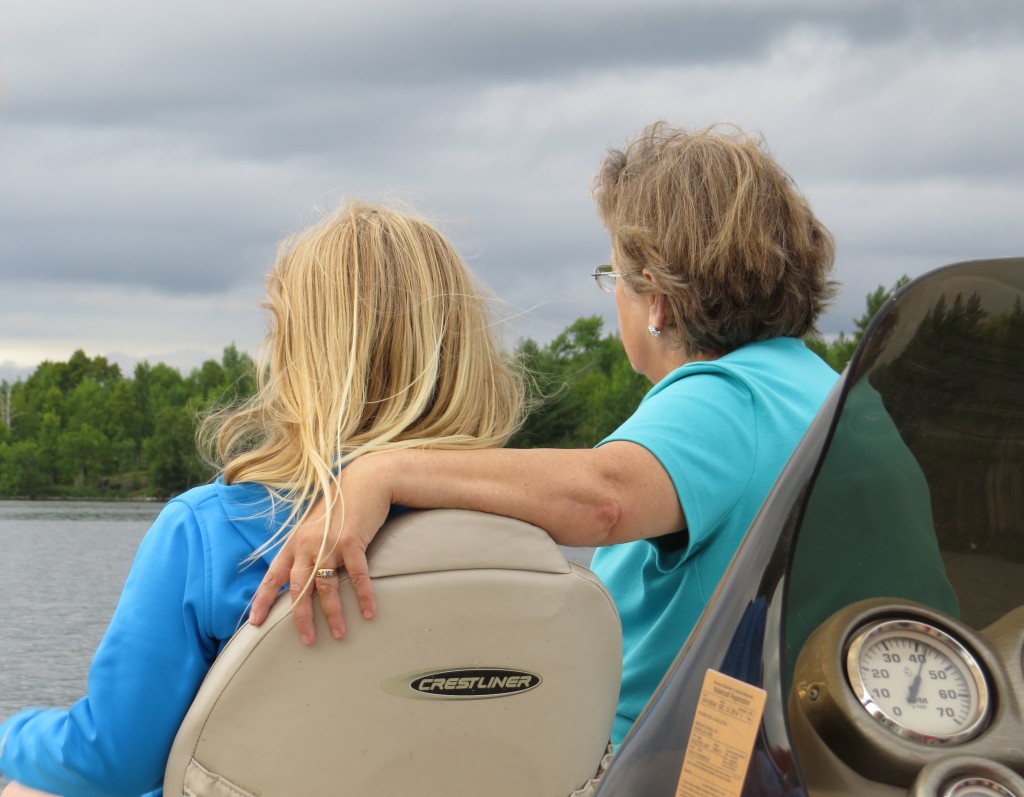 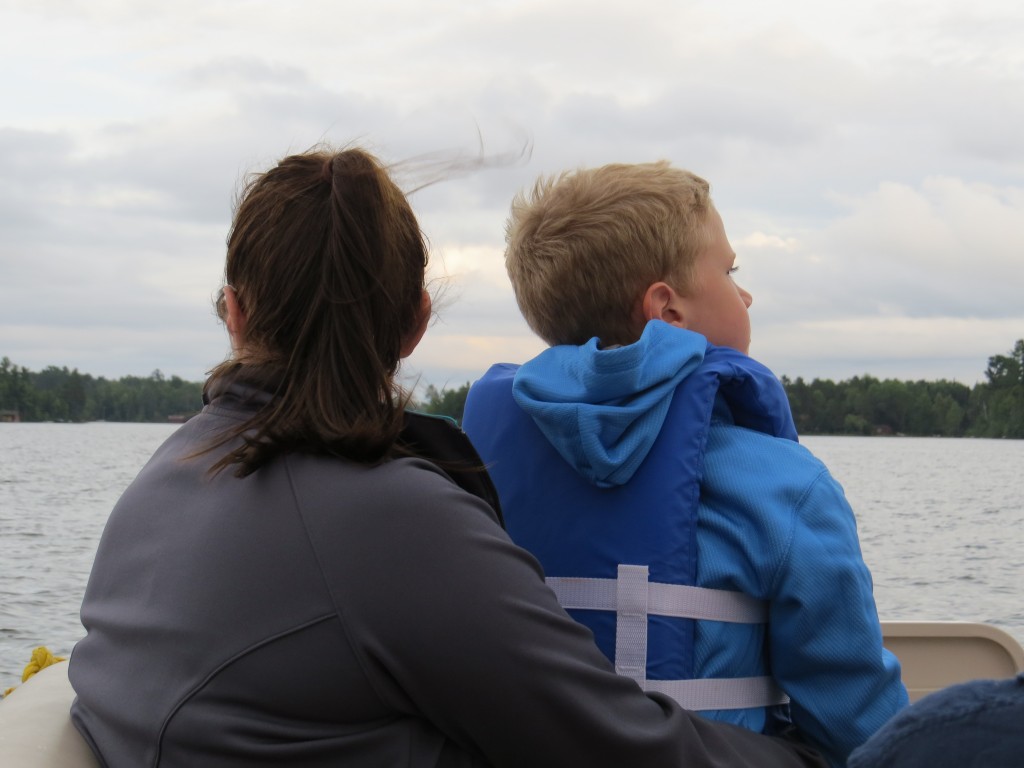 It was time to make our way back across the lake.  The kids watched the waves. 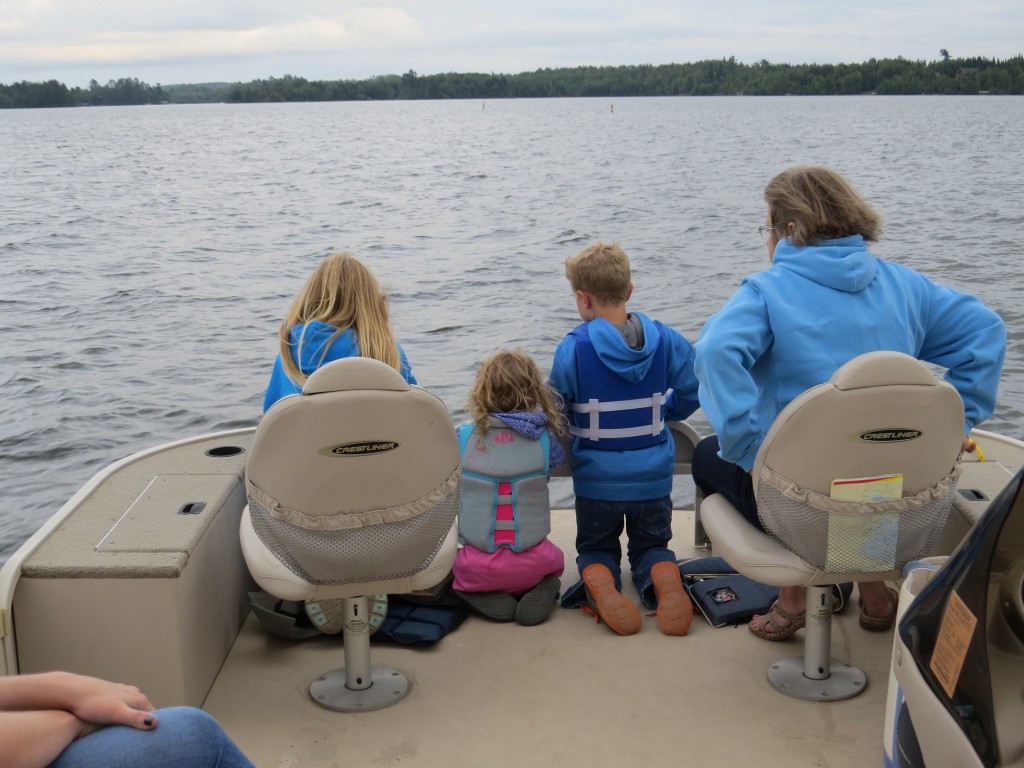 I kept vigil for birds.  Finally I found one that made me ask Dad to turn the boat around and stop.  I needed a picture of a Herring Gull for my photo collection. 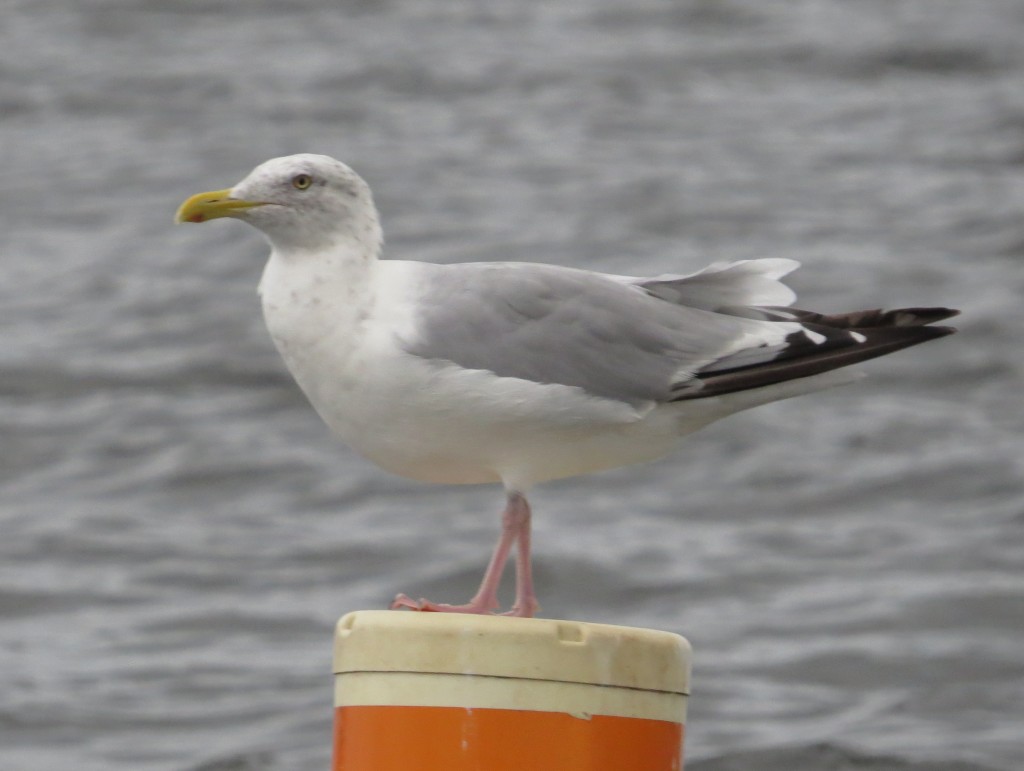 A couple years ago I couldn’t imagine that my spark for the Bald Eagle would have to be reignited or that I’d be photographing a gull (a type of bird I didn’t care for in my early birding days).  Yet here I was doing both.  And here Evan, along with the rest, were excited about birds again.  The tree of birding had been refreshed with the feathers of eagles, herons, loons, and such.  It was good to get back to the basics.