When I planned the trip to Montana to see Greater Sage-Grouse with my dad, I had blinders on.  I was fixated on one bird and rightly so considering its significance.  Somewhere along the way, even as I was making birding plans for Arizona and a late winter trip to northern MN, curiosity got the best of me regarding central Montana. I began to wonder what other cool birds we could get.  Studying eBird bar charts for the Billings area, I started to realize there was a unique chunk of birds we could add to our life lists that would be difficult to find where we normally bird in MN and AZ. The prospect of bonus lifers was indeed exciting.  Not only could we pick up life birds, but we could pick up all kinds of other western goodies as well.  In both regards we were successful and had a lot of fun.  Here’s the run-down.

1. Say’s Phoebe – still need one in MN and therefore still like seeing them everywhere else, even if that’s at a rest stop on I-94. 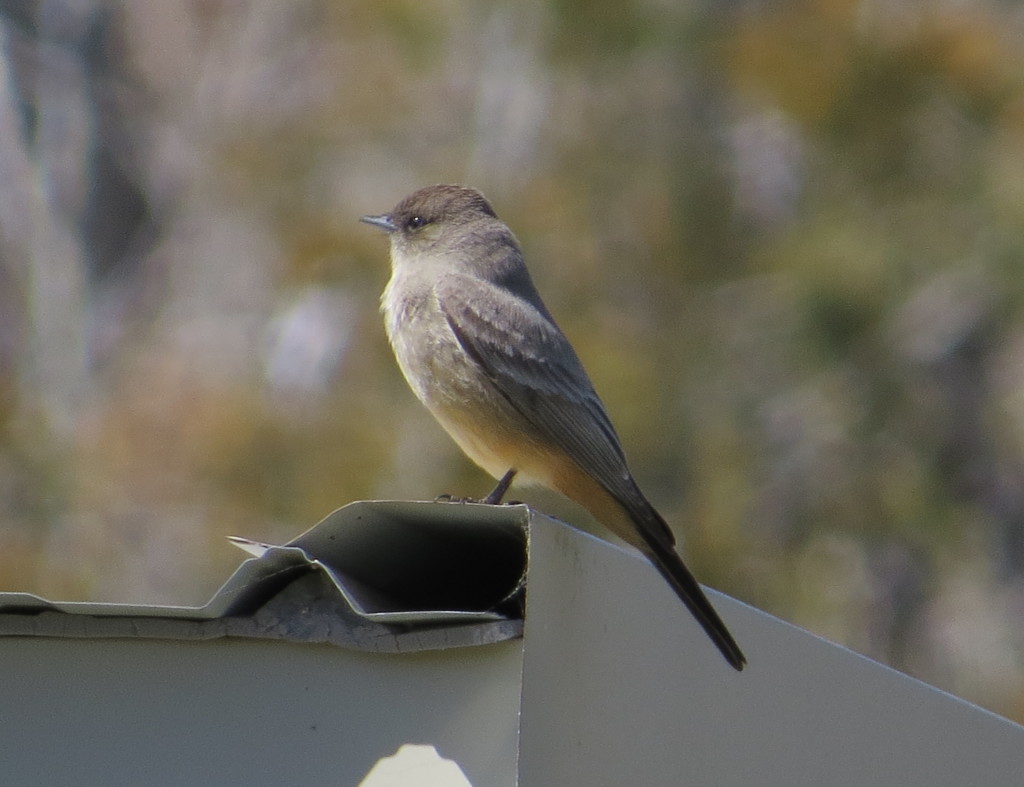 2. Sharp-tailed Grouse – I’ve seen and shot my fill; a quick interstate sighting filled any remaining Sharptail void for the time being.

3. American Avocet – I’ve got better photos in the archives. This is probably the only shot I’ll get at seeing them for 2015, so it’s getting posted. 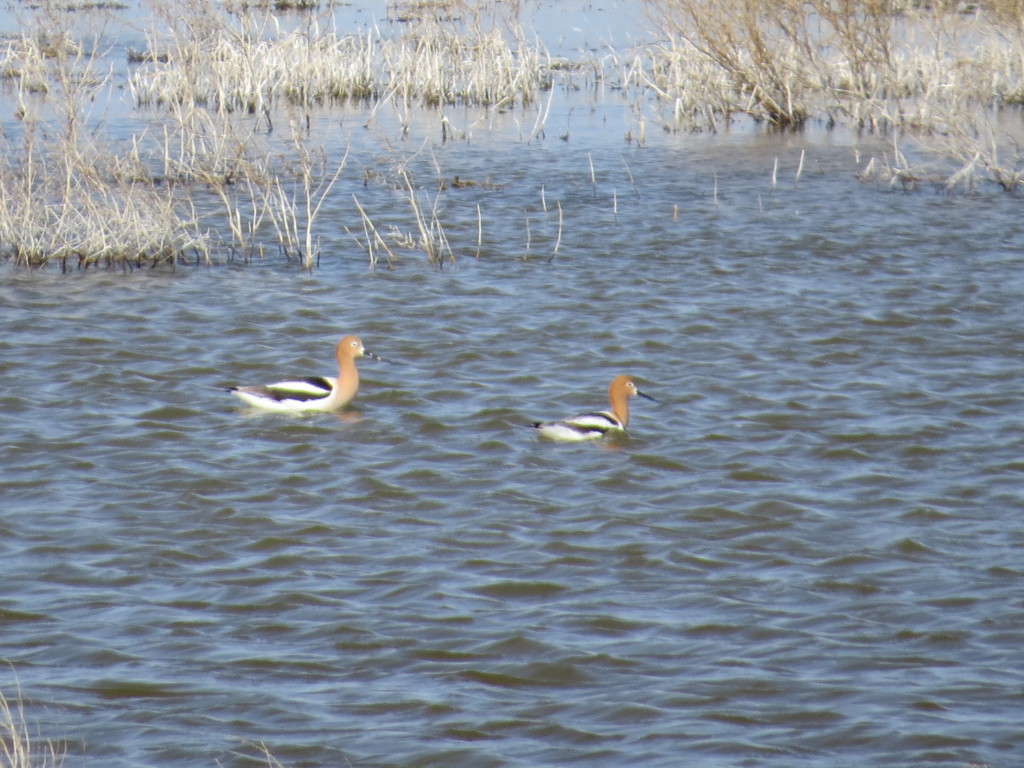 4. Swainson’s Hawk – If the big sky and rugged terrain don’t remind you that you’re out west, freeway fly-overs of this raptor will.

5. Mountain Bluebird – even when it’s a blur, this bird is a welcome flash of color on the monochrome landscape of early spring. 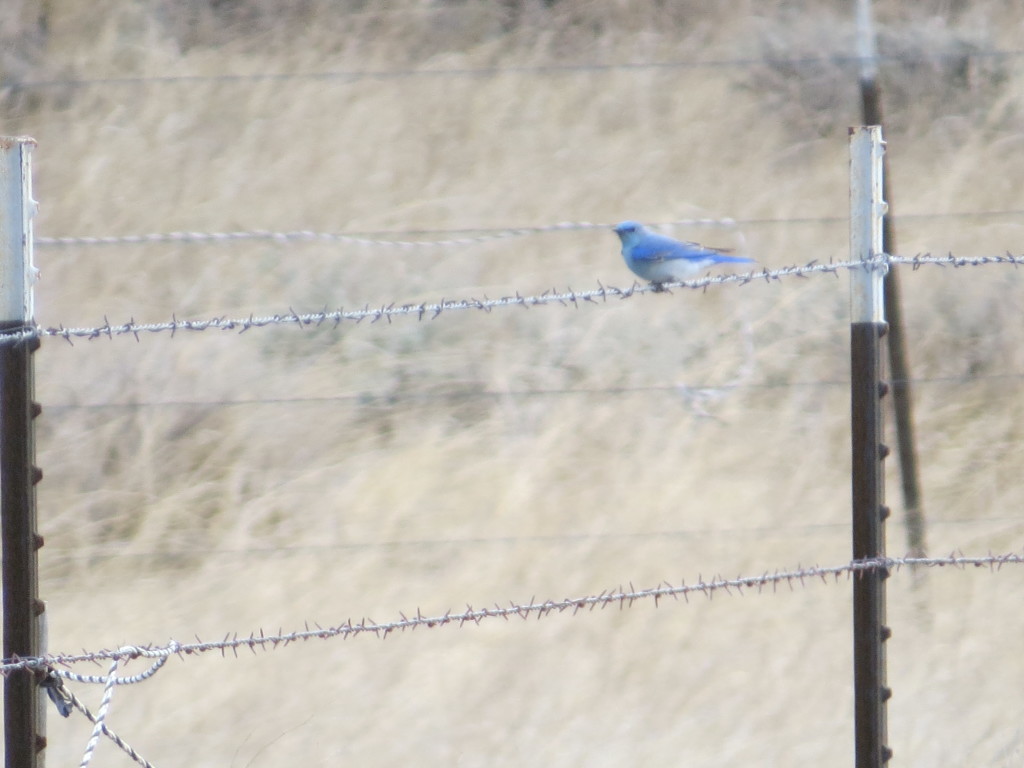 6. Burrowing Owl – never, ever gets old.  Hunting for them among the similar-sized, shaped, and colored prairie dogs in a dog town is a fresh take on owling.  The challenge is accentuated by the whack-a-mole behavior of both species. 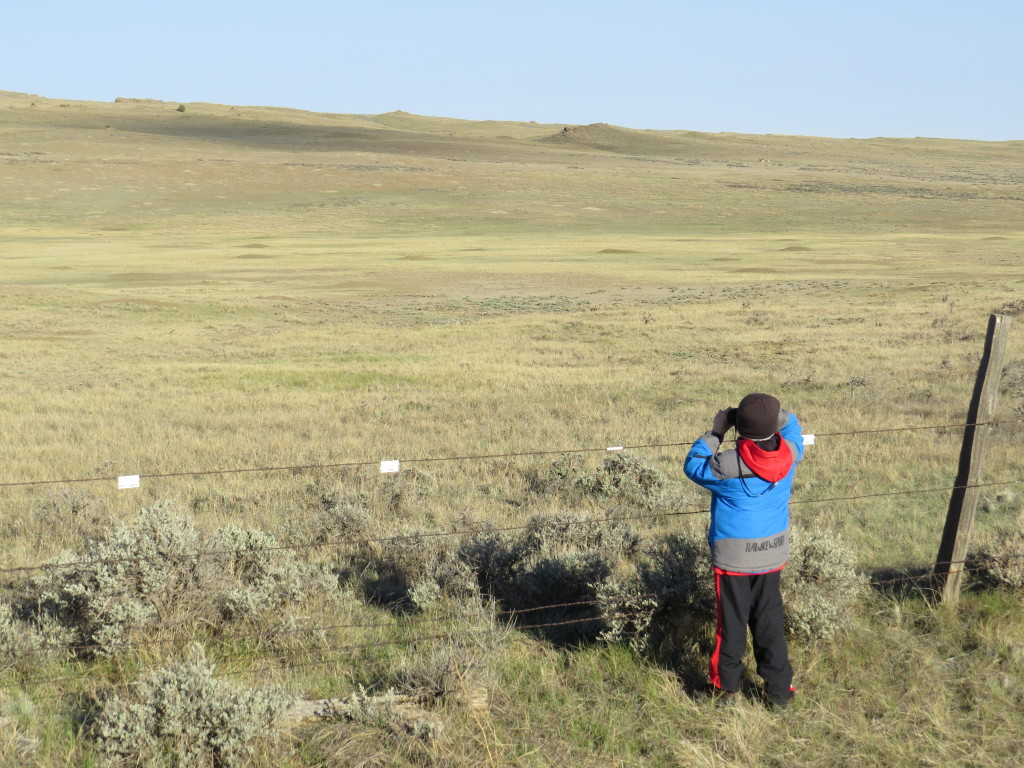 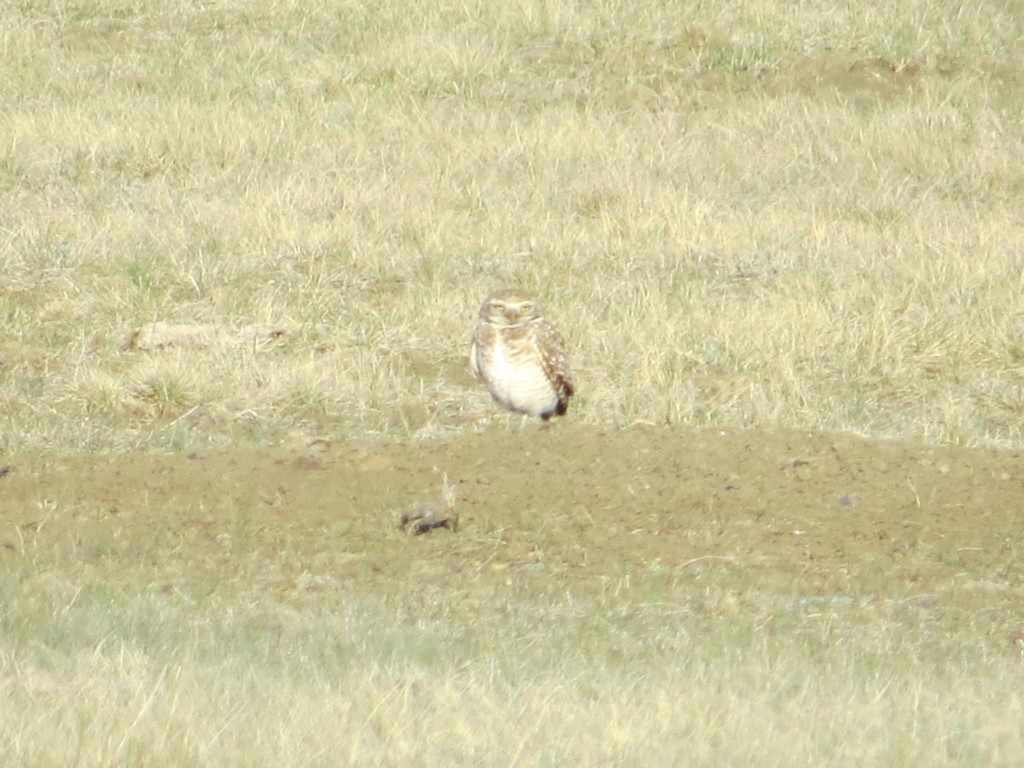 John Carlson, the facilitator of our Sage-Grouse adventure, told us that he worries that people who shoot Prairie Dogs for sport may inadvertently shoot Burrowing Owls – a terrible, but possible scenario. 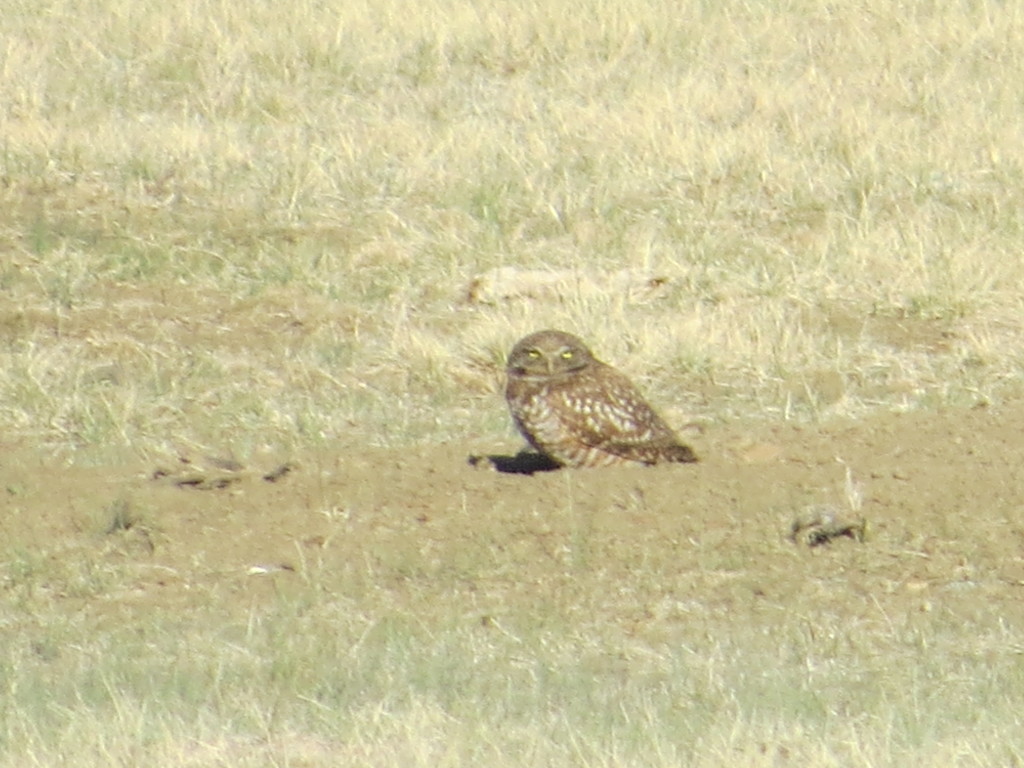 John also pointed out the vocalizations of Burrowing Owls.  I’ve seen several Burowing Owls in Arizona, but I’ve never heard one before.  It was pretty cool and distinctive.  You can bet I’ll be listening for that sound whenever I bird in western Minnesota.

7. Ferruginous Hawk – perhaps an even a better western hawk than Swainson’s Hawk and one heckuva a mother, finding time to rear a brood and decorate.  The word ‘nesting’ to describe the preparatory behavior of expectant mothers was taken from this bird’s efforts. 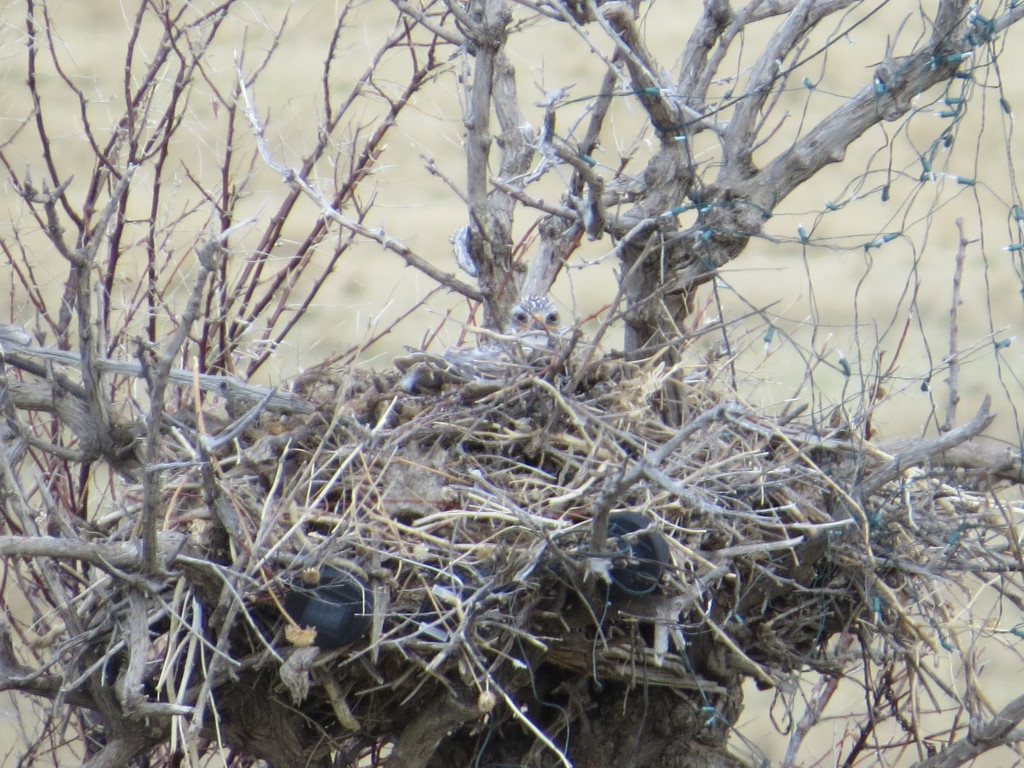 I never noticed the trash and Christmas lights until I got home and looked at my photos.  It’s not like someone left them on this tree, either.  We were in the middle of nowhere. John had spotted this nest for us and asked us if we wanted to see a Ferruginous Hawk nest.  I asked him later if he had this nest scoped out from a previous trip, and he told us it was his first time seeing this particular nest–he said a nest in a lone, short tree on the prairie was typical for this species. 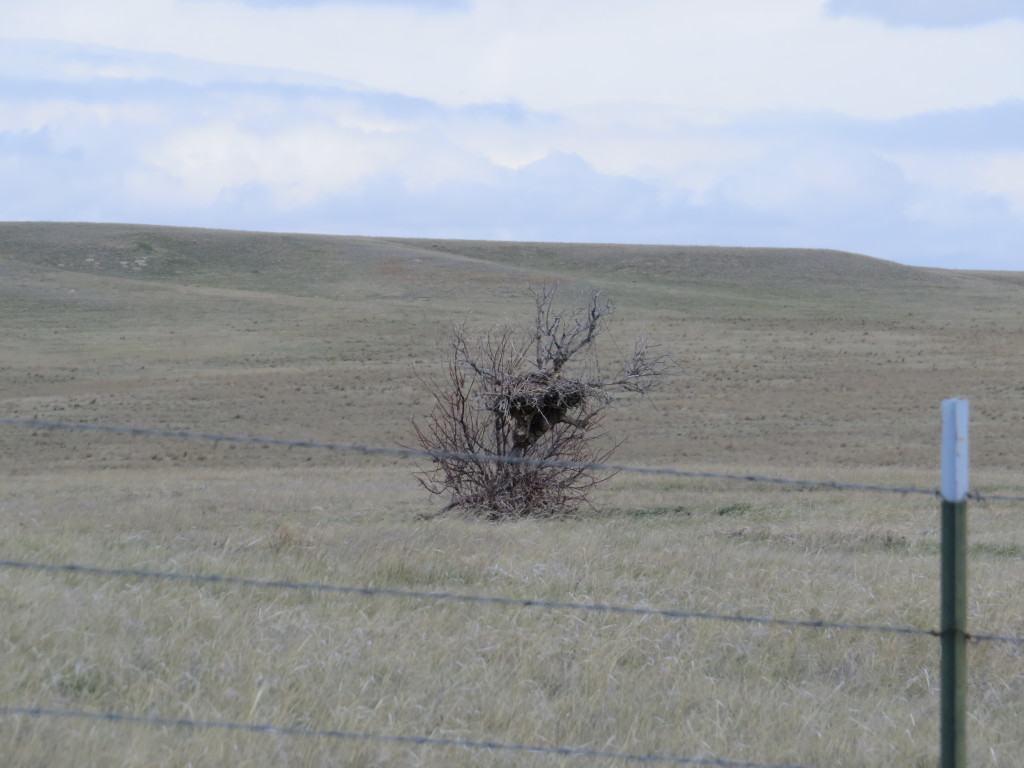 John then spotted the male nearby. 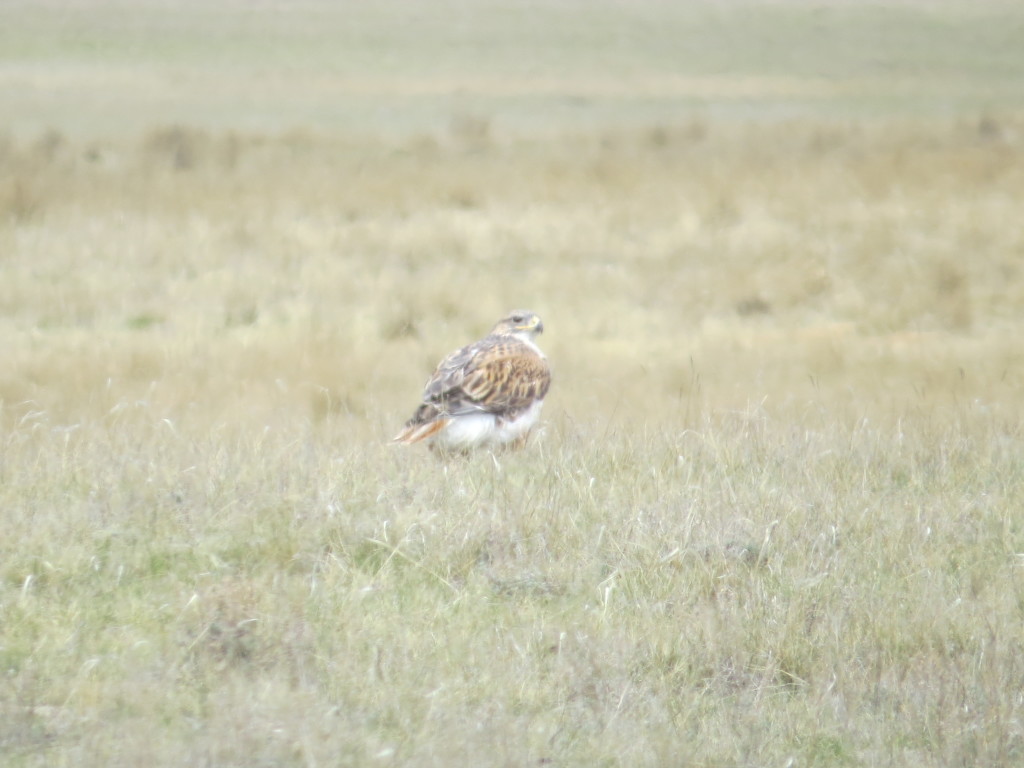 It was fun to see the male exhibiting the behavior described in the field guide, which is sitting out in the open on the ground and always in a perfect western setting. 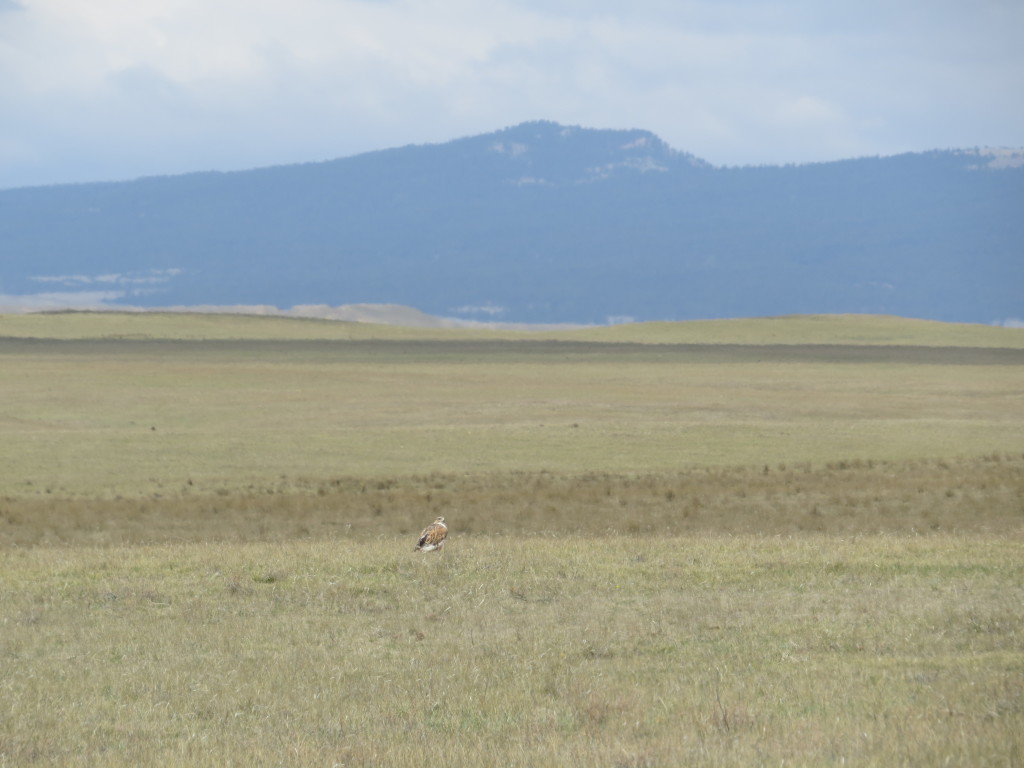 8. Western Meadowlark – a regular sight back home in MN, but a crazy ubiquitous sight out West.  I have never seen more Meadowlarks.  Therefore, the law of large numbers in birding says that eventually even I will get a good photo of one.  And considering this is Dad’s favorite bird from his childhood days on the North Dakota prairie, I had to post some photos of this bird from our special trip. 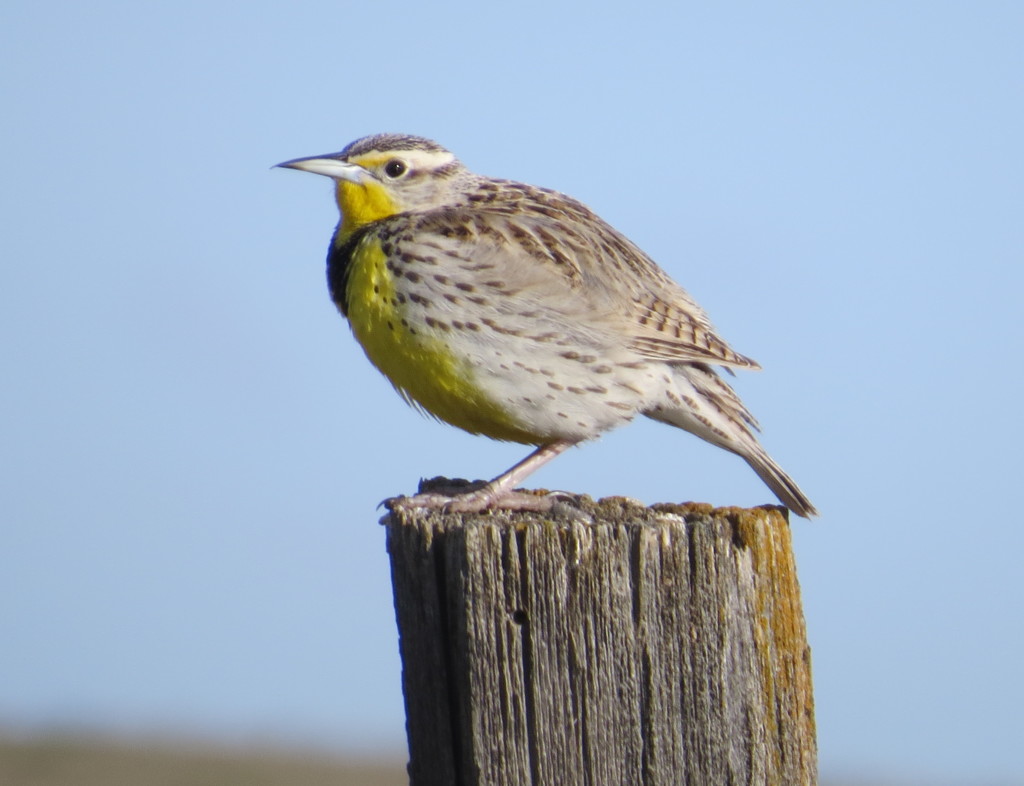 Their song is beautiful and could be heard constantly from all directions. 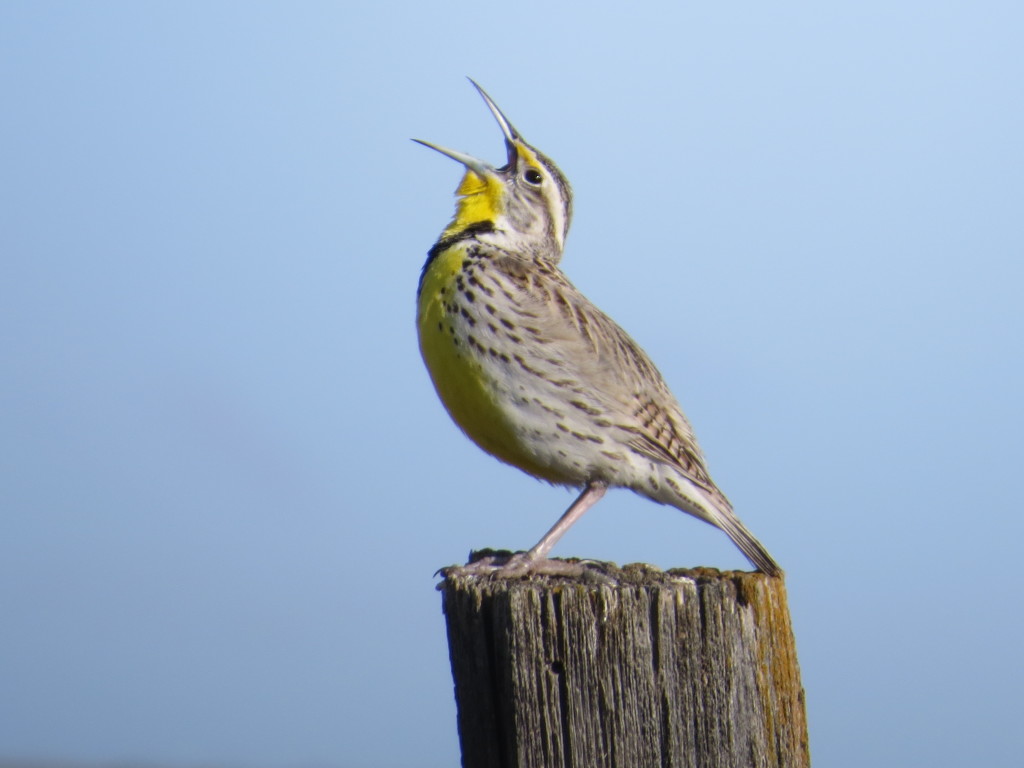 It is the song that my Dad enjoys most about them. Have a listen for yourself.

The only thing better than that is watching my dad’s favorite bird photo-bomb his research bird, singing the whole time.

1. Sage Thrasher – we saw one. Barely. John pointed out a bird that flew away.  Since we were still on the hunt for Greater Sage-Grouse, we didn’t take time to poke around for it.  It was positively identified by John and seen by us–those are the minimum requirements for a lifer but by no means make for a satisfying lifering experience.  It was an upgrade from a similar sighting with Laurence Butler in the Sonoran Desert last year; in that situation Laurence was pretty sure a bird that flew by was a Sage Thrasher.  We held off on counting it then.  It’s counted now, but better looks are required in the future.

2. California Gull – a very good-looking Gull with that dark eye and red orbital ring.  John found us a smattering of them at the Yellow Water Reservoir in the Yellow Water Triangle where Dad worked in the 1970s. 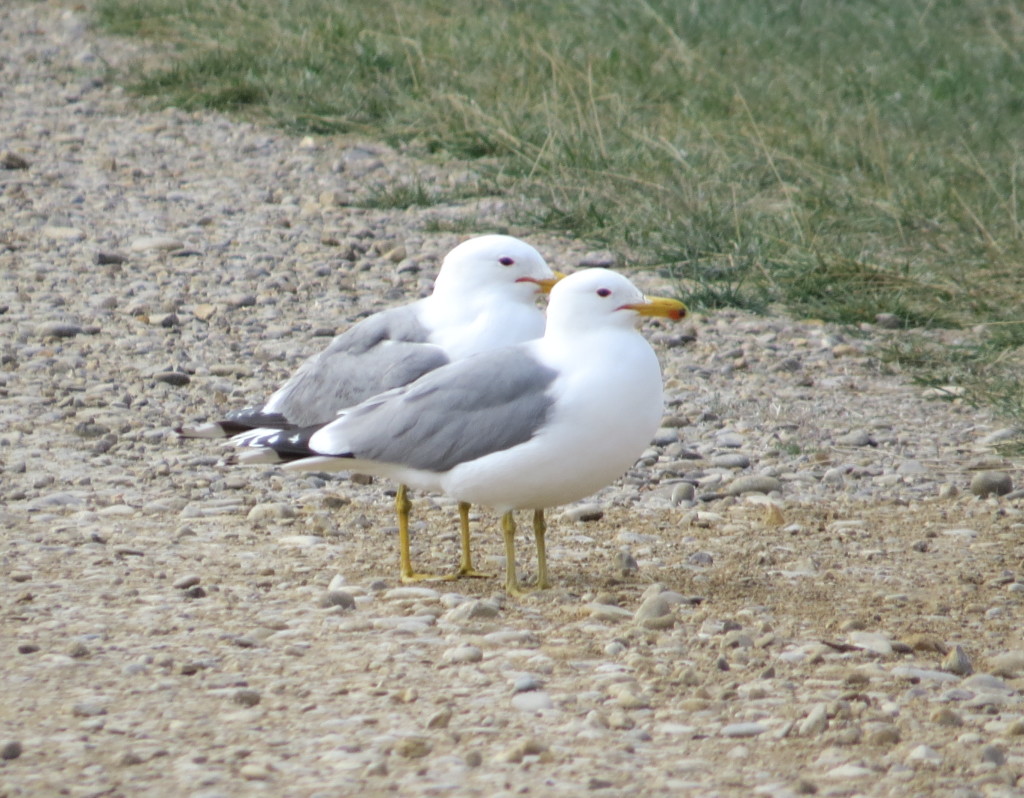 Seeing this Gull has given me confidence in knowing what to look for when we comb through the hundreds of Ring-billed and Herring Gulls at the county landfill back home in hopes of finally turning up a county record. 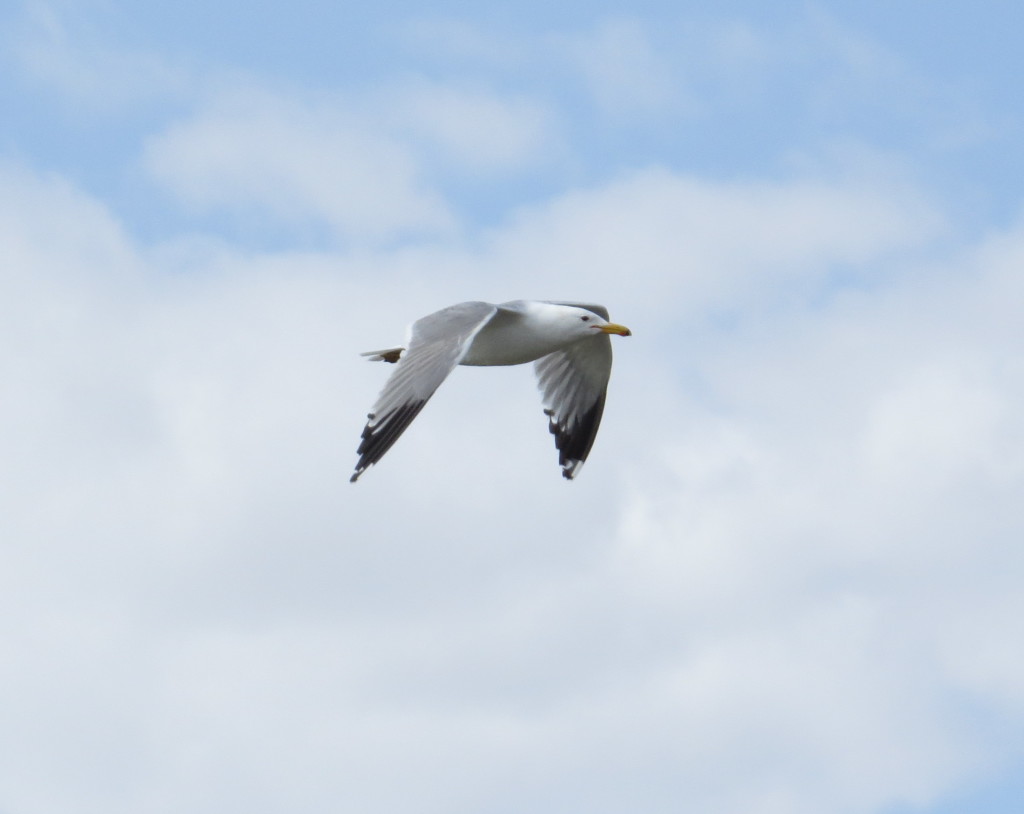 3. Chestnut-collared Longspur – a lifer for Evan.  This is a tough, tough bird in Minnesota.  Last year Steve Gardner and I traveled to Felton Prairie to successfully track down one of only a handful of birds in the whole state.  Here in central Montana, where there are seas of prairie grass, they are way more common. 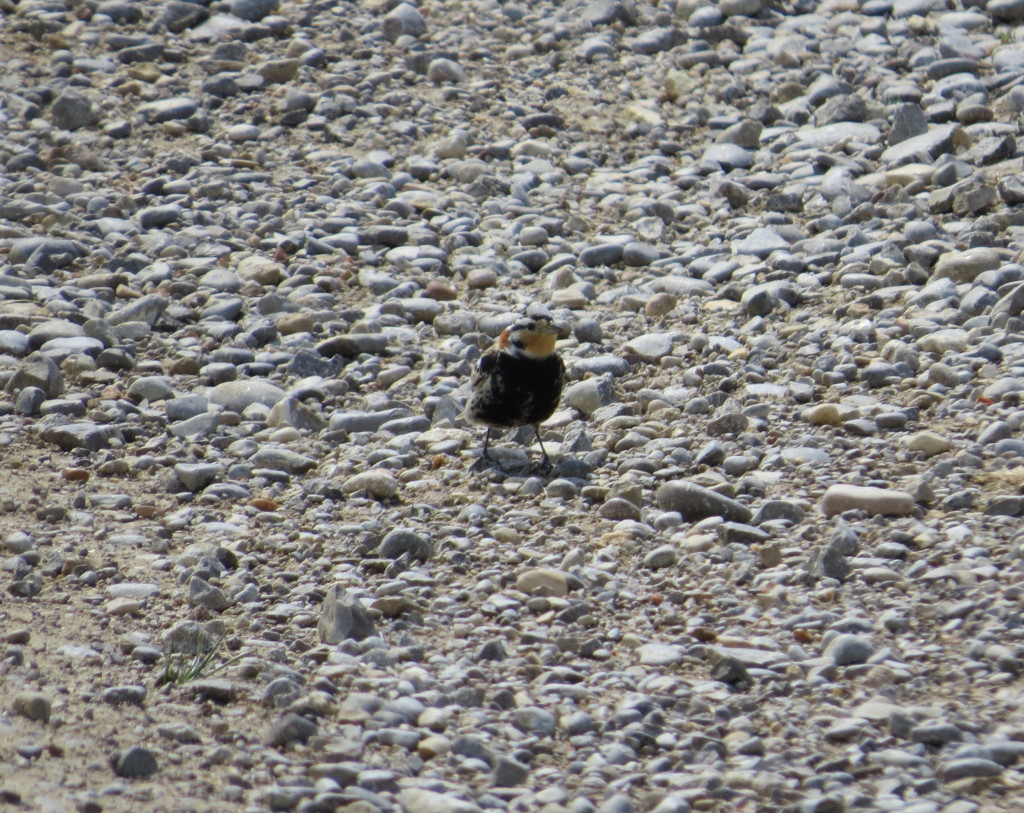 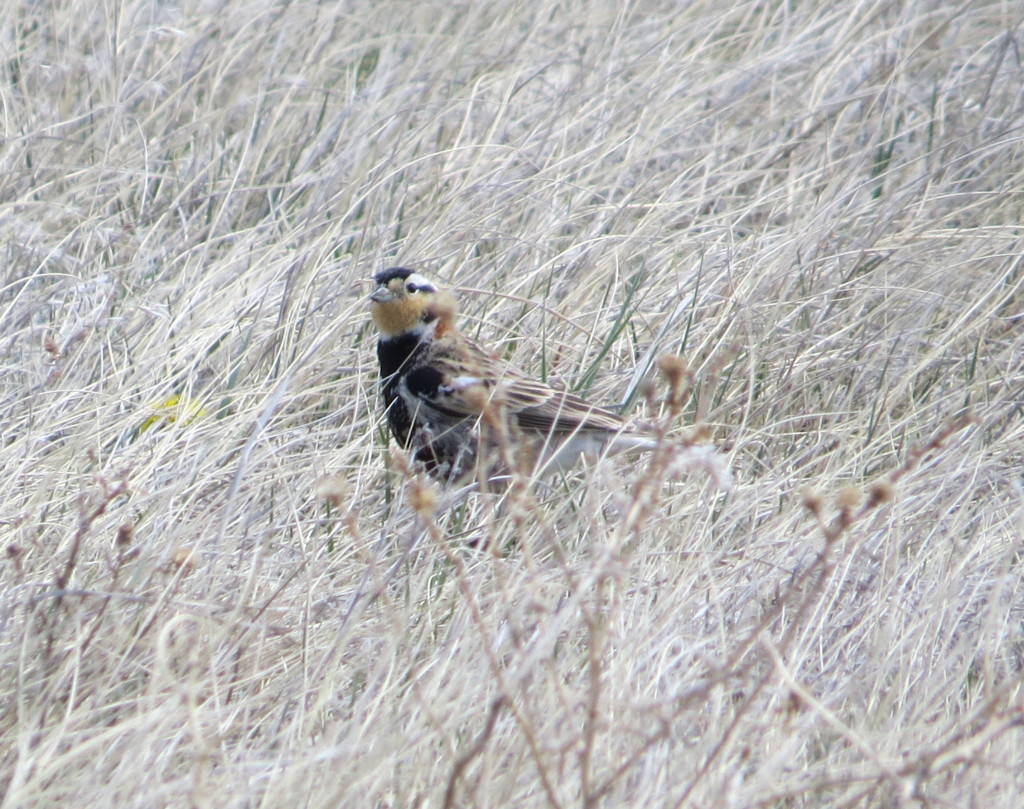 I don’t recall the name of the road we traveled where we saw this Chestnut-collared Longspur, but whatever it’s called, I’ve dubbed it Longspur Road. 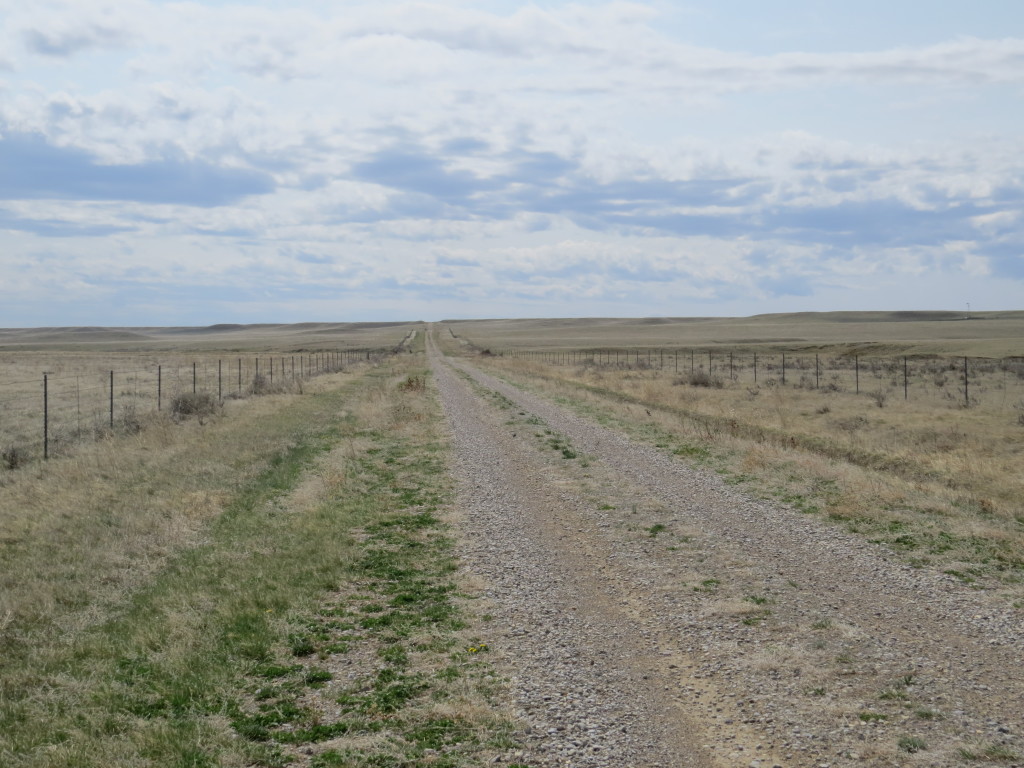 4. McCown’s Longspur – gobs upon gobs of this hoped-for bird were seen pecking grit off the road in the 40 mph wind. We literally saw hundreds.  John figures we were witnessing a large migration movement and not just birds on territory. 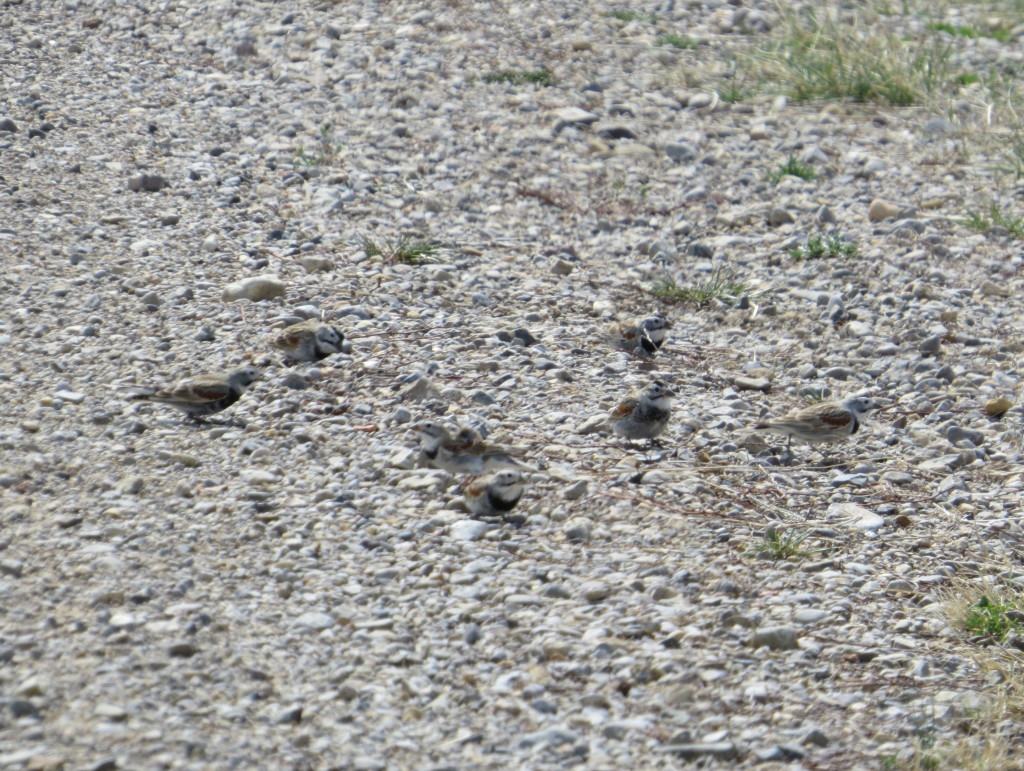 This Longspur has such a limited range in the west/central part of the U.S. with most of its summer territory being in Montana.  Not only were we in the right part of the country, but we were there at the right time of year to see these awesome Longspurs in their breeding plumage. 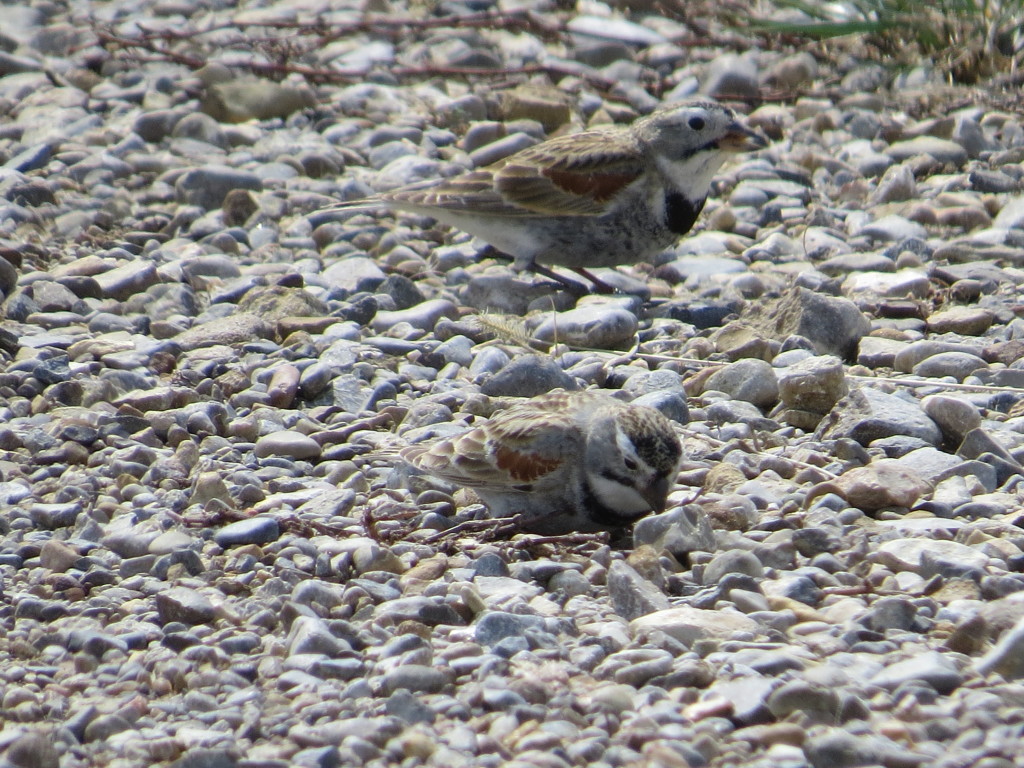 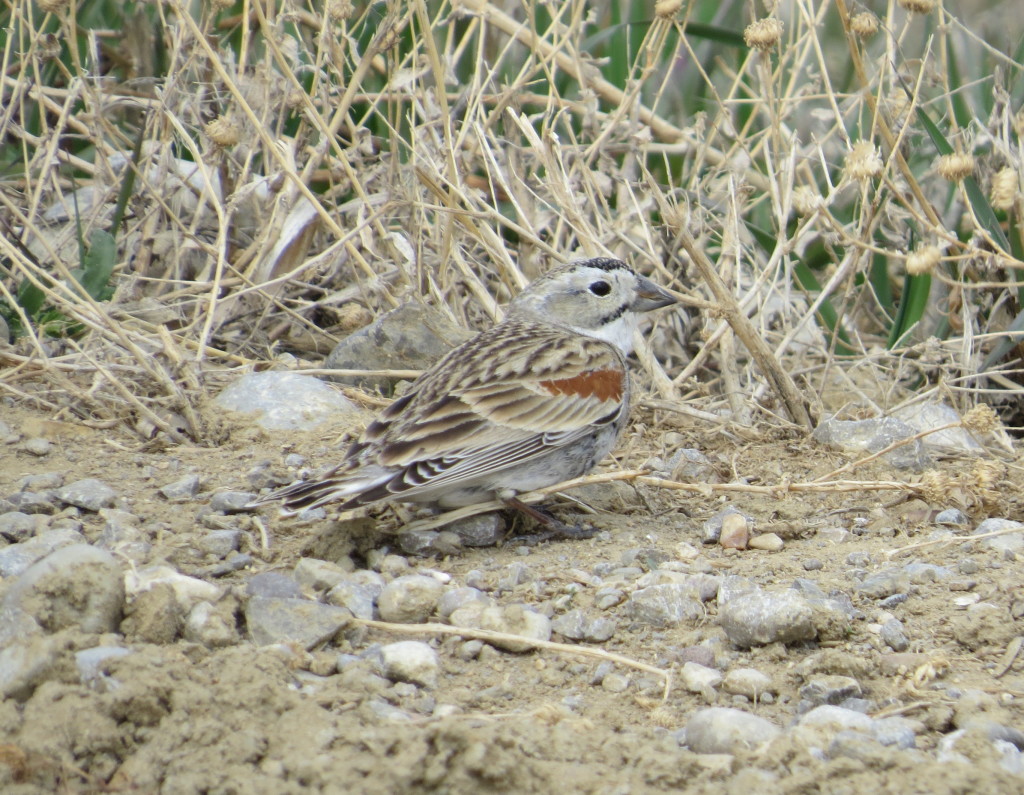 5. Long-billed Curlew – this was another hoped-for bird that is a summer resident to the grasslands of the Great Plains.  I had the pleasure of spotting this lifer myself as this strange-looking creature seemed out of place as it strolled through the grassland interspersed with sagebrush. 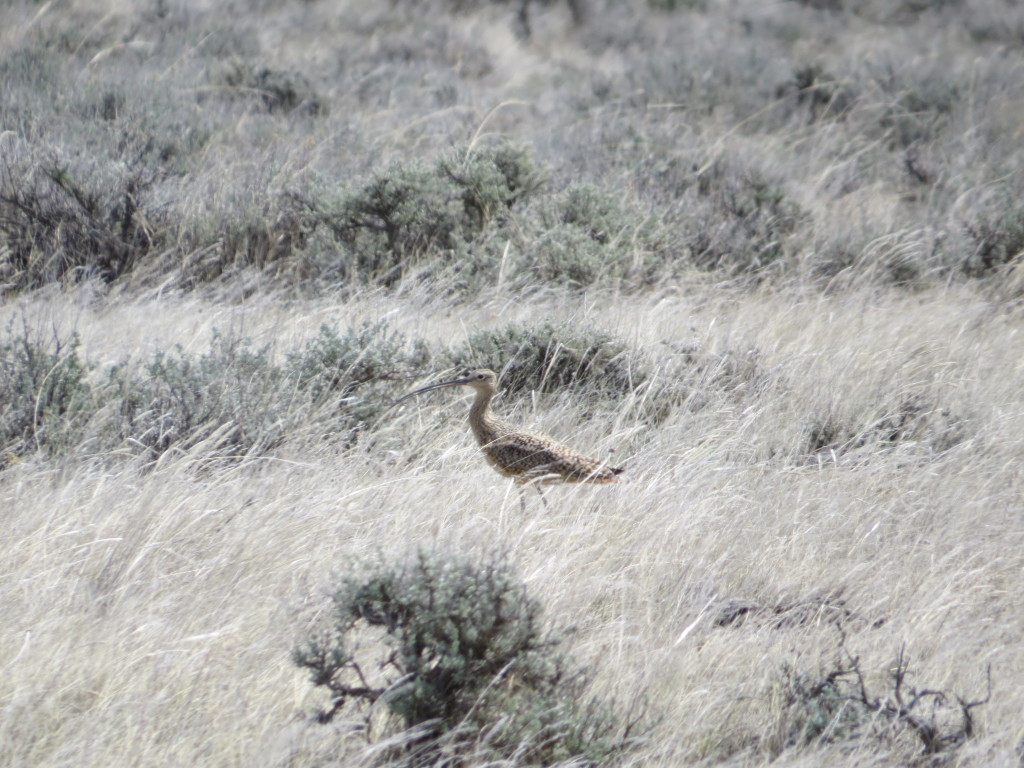 It seemed so bizzare to see this giant shorebird out in the sea of grass and sage with no water in sight.  It reminded me of seeing the resident Marbled Godwits at Felton Prairie back in Minnesota. 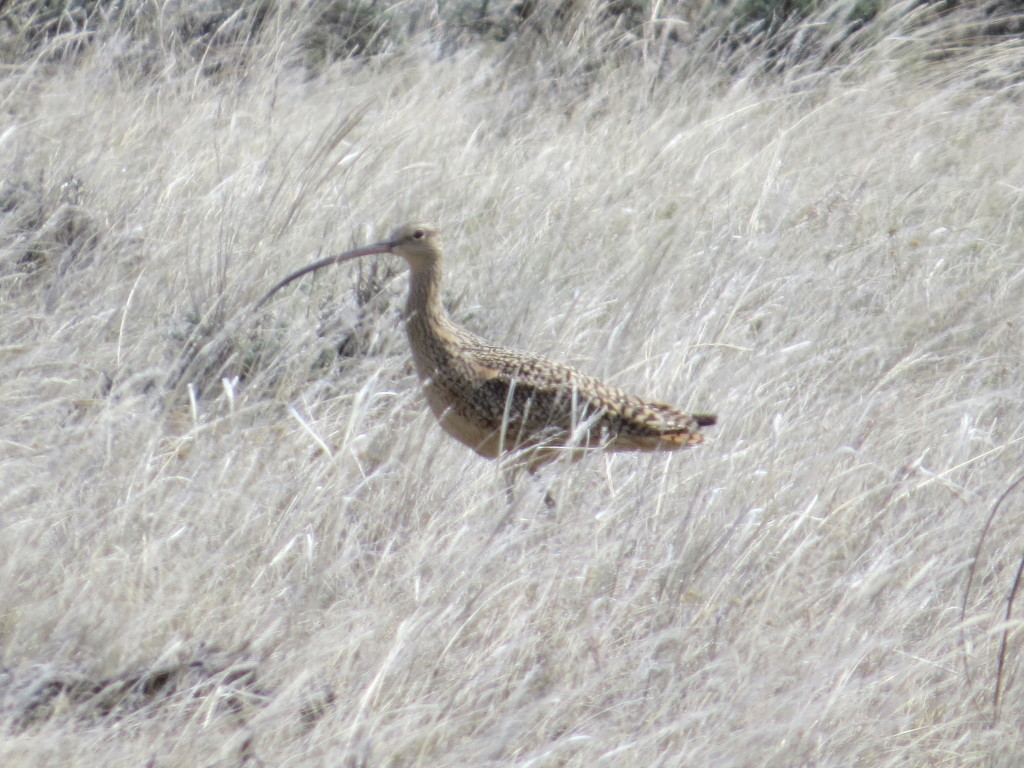 We ended up seeing a second Curlew a little later, but neither were very photogenic.

We had a couple life bird misses, but no one is complaining here.  In addition to the big lifer of the Greater Sage-Grouse, Evan picked up five additional lifers and I picked up four new ones.  These birds were the icing on an already delicious cake.

The Ducks of North Dakota

On our way back home, we again spent the night in Bismarck.  The next day I decided to make a quick stop east of town to look for some reported Hudsonian Godwits.  There were no Godwits around, but one thing North Dakota is never short on is ducks.  Certainly this state has to have the highest duck to person ratio in the nation.  Try to not see a duck in North Dakota.  The highlight duck for me was seeing hundreds of Northern Pintails.  They are usually just a single digit bird back home and seen only during migration. Despite their numbers, I had trouble finding any that weren’t shy for photos. 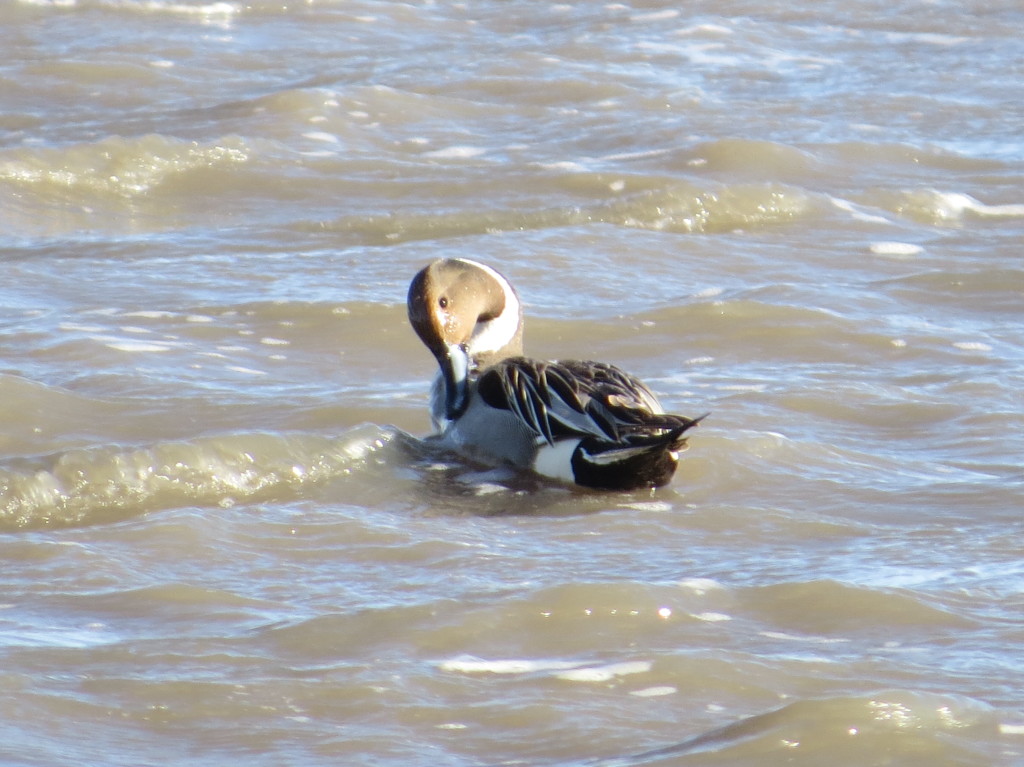 With thousands of ducks you’re bound to get a good photo opportunity or two, even if they are common species like the Gadwall and Blue-winged Teal. 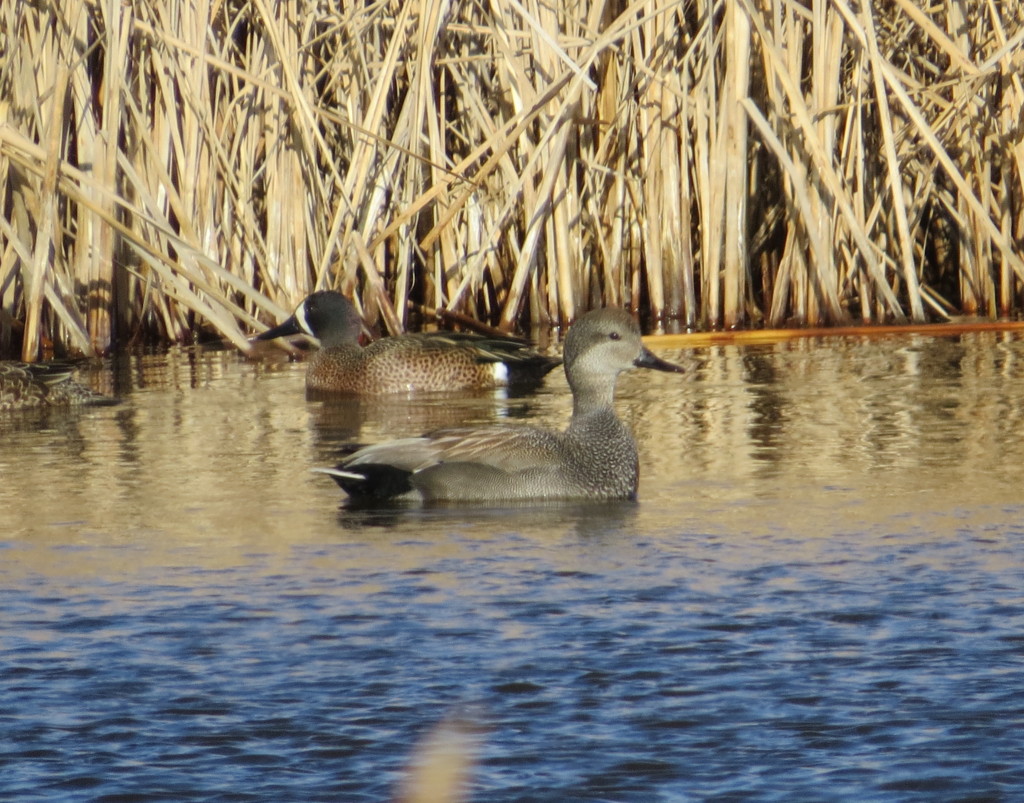 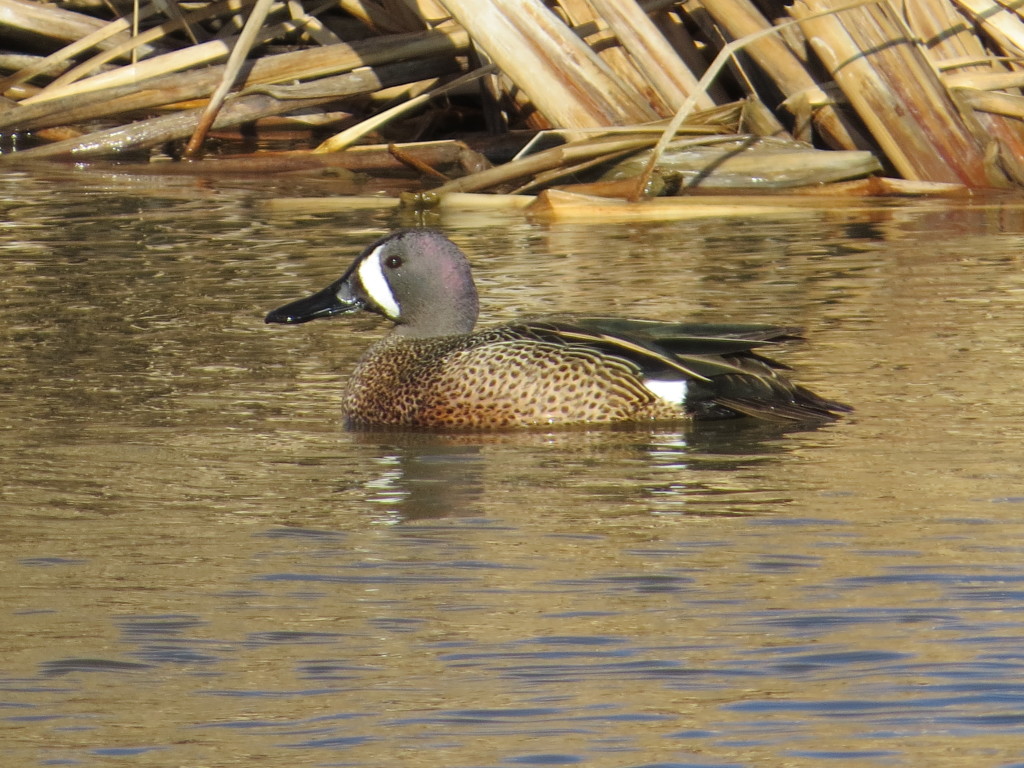 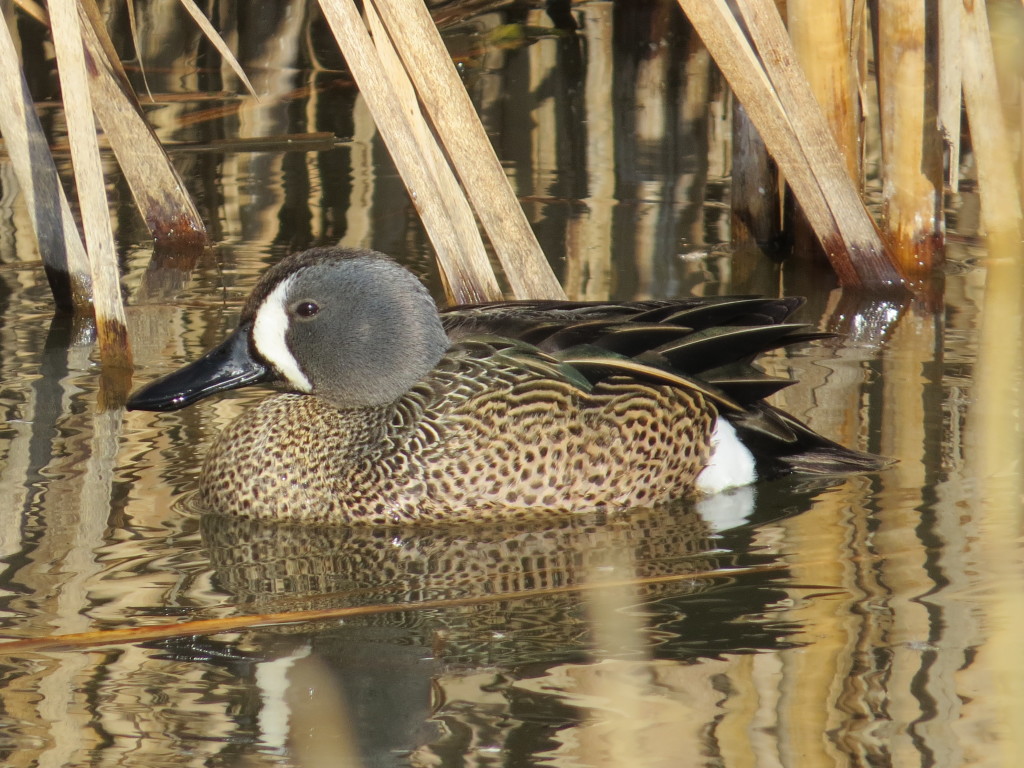 On our trip, we saw three giant bird statues: Sandy, the 40-ft tall Sandhill Crane in Steele, ND; the world’s largest American Crow in Belgrade, MN; and the world’s largest Greater Prairie Chicken in Rothsay, MN.  In hindsight, I should have stopped at all three for photo ops, but at least we made the stop in Rothsay.  We were on a Grouse high after our big trip, so it only seemed fitting that we should stop for this one.  It wasn’t long before this trip that we were birding in Arizona with Tommy DeBardeleben and learning to inject more fun in our outings. 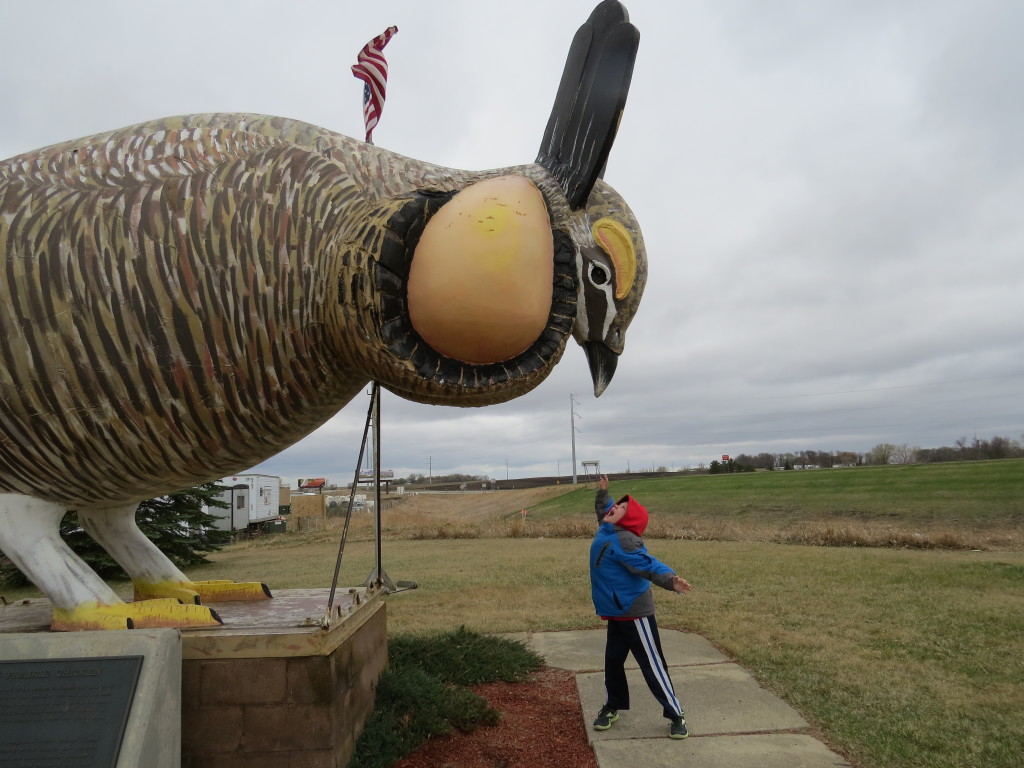 This next photo was not completely orchestrated by me.  Evan really did discover the lesser end of a Greater Prairie Chicken all on his own.  The smiles are 100% natural. Oh, to be 8 again. 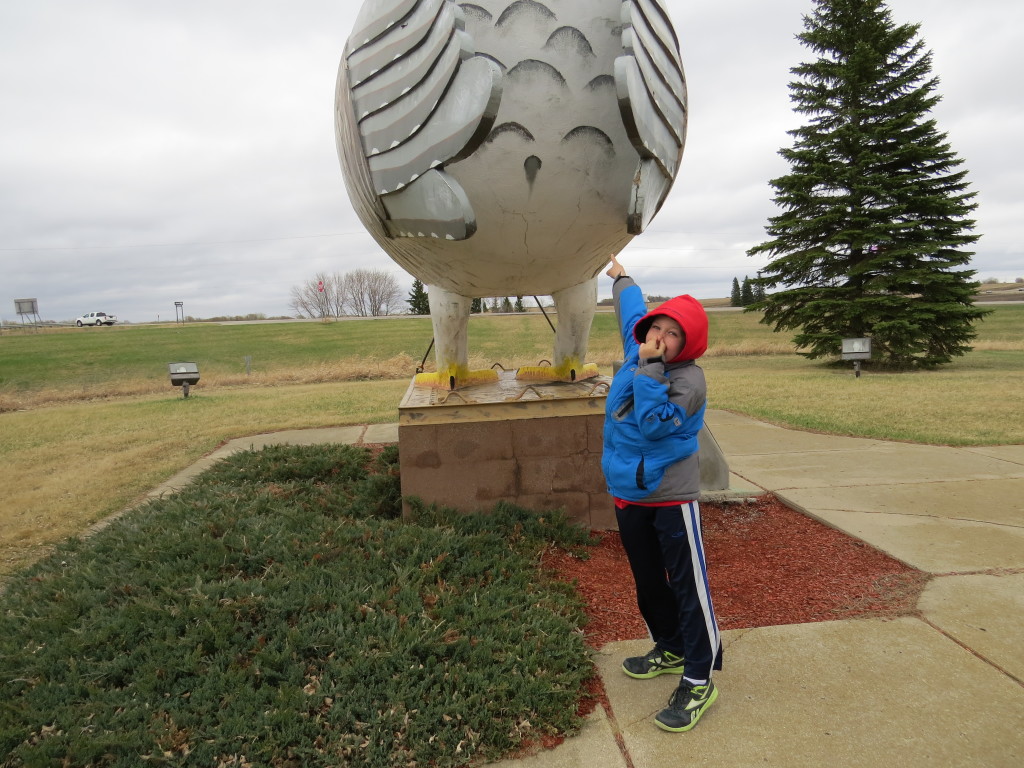 Here’s one the grandmas can approve of. 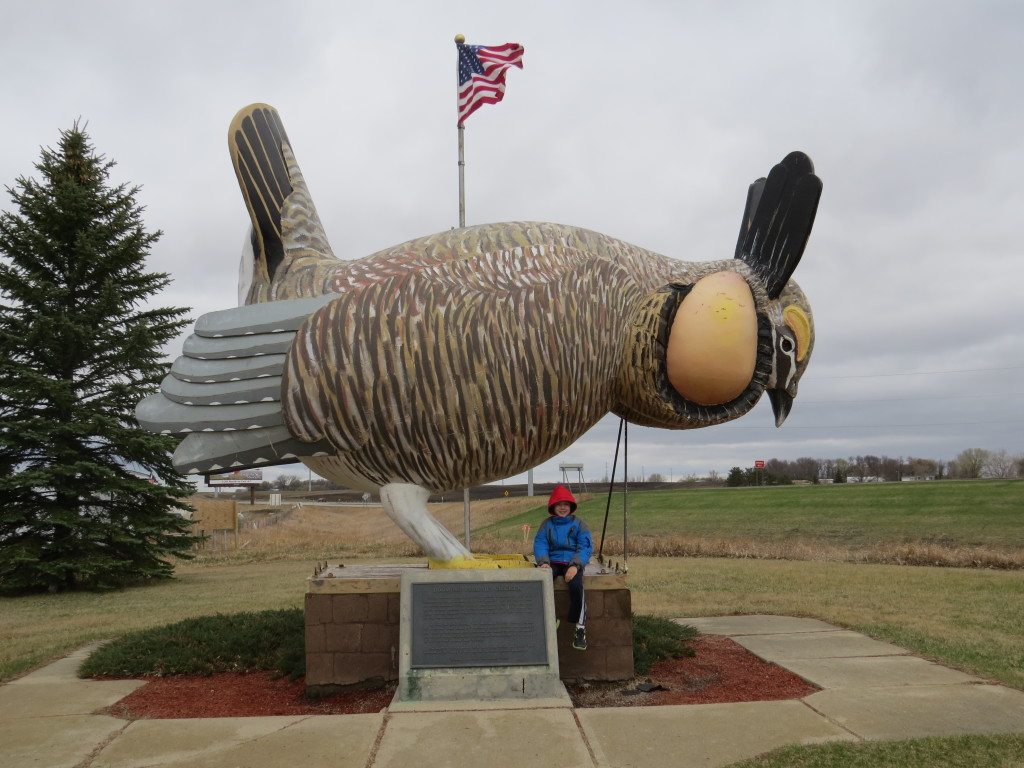 After seeing Greater Sage-Grouse do their mating display, Evan and I decided it would be fun to reserve one of the Minnesota DNR’s blinds this upcoming spring to watch booming Greater Prairie Chickens near Rothsay.  And eventually, I’d like to see all the Grouse species do their respective, springtime mating rituals.  There is no better way to see Grouse.

As our trip was drawing to a rapid close as we were racing to get back in time for a piano lesson, we squeezed in one more quick stop.  We simply had to. 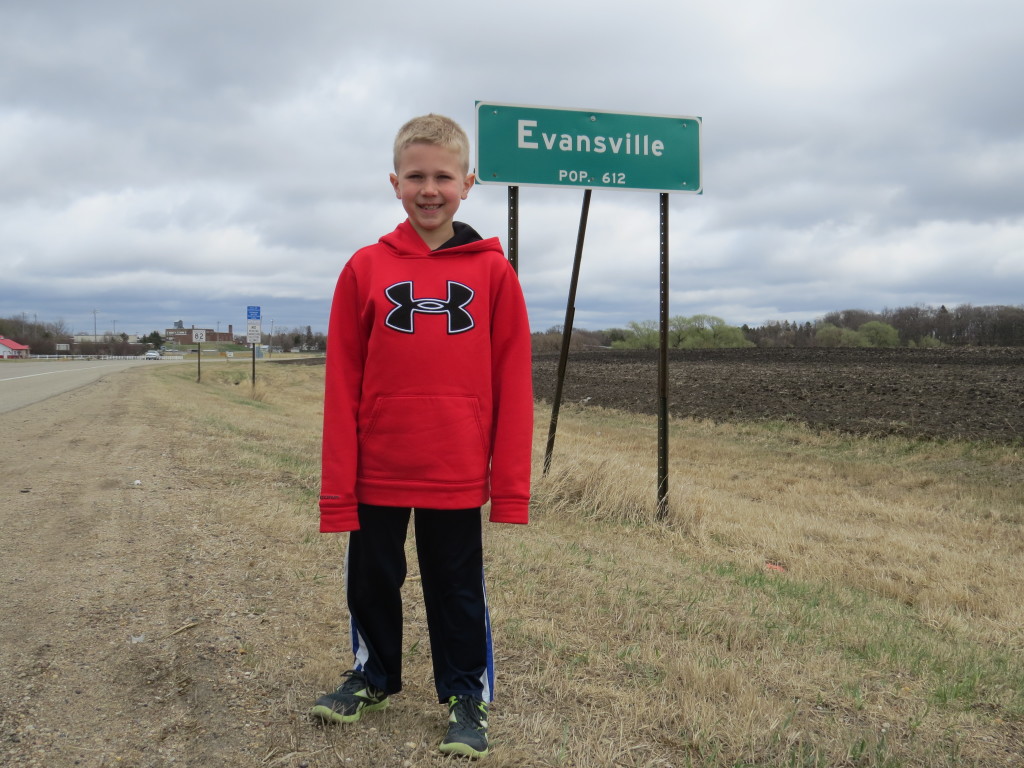 This was a monumental trip for Evan and me filled with good memories, great birds, and new and old friends. There will no doubt be more birding adventures, both little and grand, but none will top this. I hope you enjoyed tagging along through these posts.