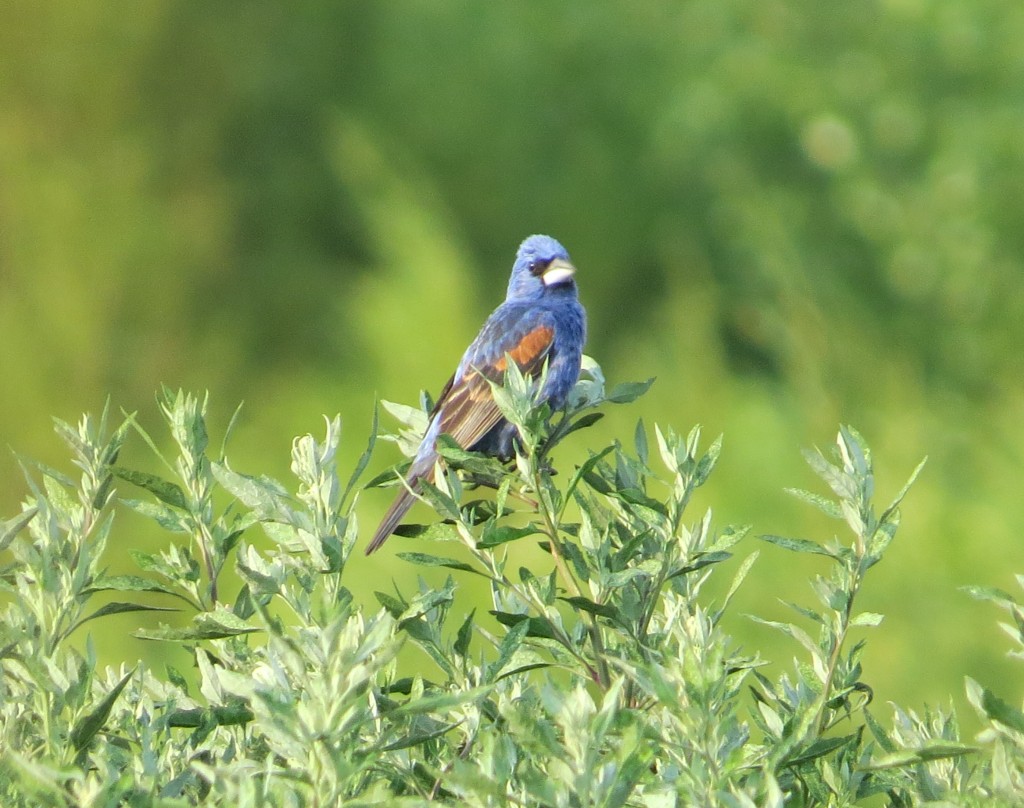 Though we racked up double-digit lifers in Colorado, that trip is a distant birding memory.  The birding back home has been incredibly exciting.  More is at play than just adding a life bird or getting that beautiful photo.  Instead, there’s been some serious citizen-science going on.

Let me get to the point.  I believe that the Blue Grosbeak is expanding its range in Minnesota and growing in numbers, so I have been doing some investigating to back up my theory.  I can remember when I first became a birder how I badly wanted to see a Blue Grosbeak. Imagine my surprise then, when I learned that they are a rare, regular species in the very southwestern corner of Minnesota.  Specifically, Blue Mounds State Park in Rock County is the place to see them.  That’s where we got our lifer last year.

Range map of the Blue Grosbeak from the Cornell Lab of Ornithology  http://www.allaboutbirds.org/guide/blue_grosbeak/id

But then I saw them further to the northeast at Cottonwood in each of the last two years when they were discovered by Garrett Wee.  I started to get curious about this species growing in numbers when Garrett reported them two years in a row.  Additionally he found a nest this year.  The site fidelity was intriguing.

Randy Frederickson furthered my curiosity when he said he was hoping to someday find a Blue Grosbeak in Kandiyohi County.  I could hardly believe that he would think it was possible, but then he told me how he and Joel Schmidt found a family of Blue Grosbeaks in Renville County just six miles south of the Renville-Kandiyohi county line in 2012.  So last week I decided to head to this location in Renville County which was the Olivia compost site.  I wanted to see if the Blue Grosbeaks were still around a couple years later.  If they were, I wanted to document them for eBird.  Some birders have been documenting their Blue Grosbeak sightings, and it is apparent that the Blue Grosbeak has gone beyond its normal Minnesota home of Rock County, the very southwestern corner of the state. 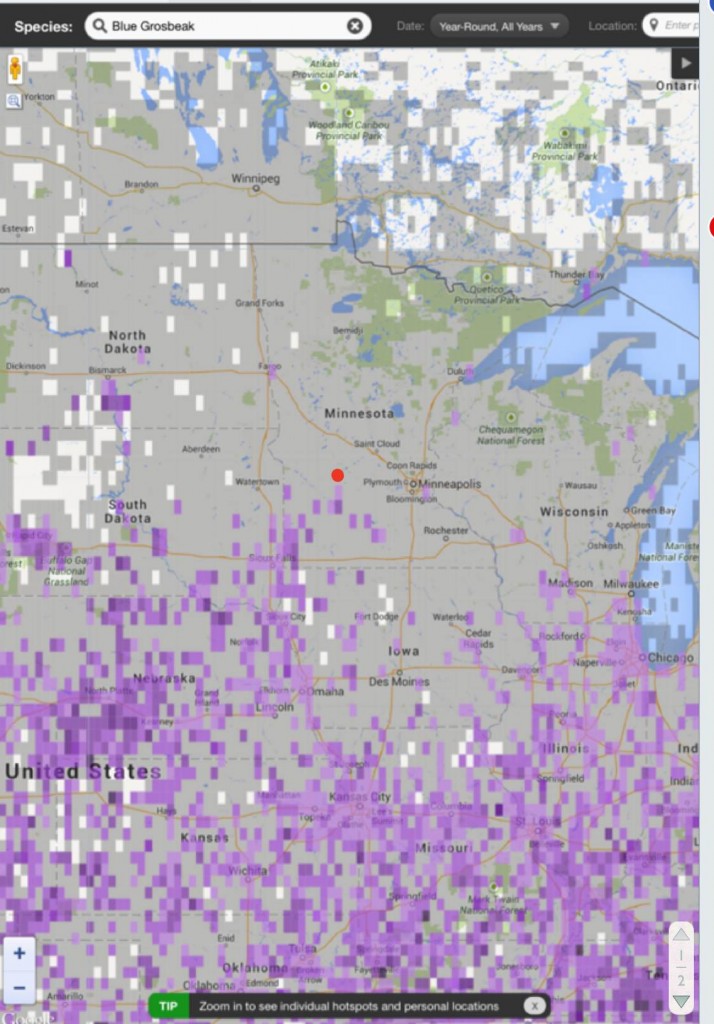 The red dot is where we live. Blue Grosbeaks have traditionally been found in just the very southwestern corner of Minnesota which is much less territory than what this sightings map indicates

I did not find any Blue Grosbeaks at the compost site where Randy and Joel found them two years prior.  Not wanting to waste a trip, I had scouted satellite imagery of the area ahead of time looking for any gravel pits or waste areas as Blue Grosbeaks prefer this type of habitat.  In our sea of green, these areas are habitat islands.  Unlike the arid southwest, this type of desert-wash habitat is rare here and makes for easy places to look for the Blue Grosbeak.  If they are in the area, they are going to be in one of these pockets of habitat. 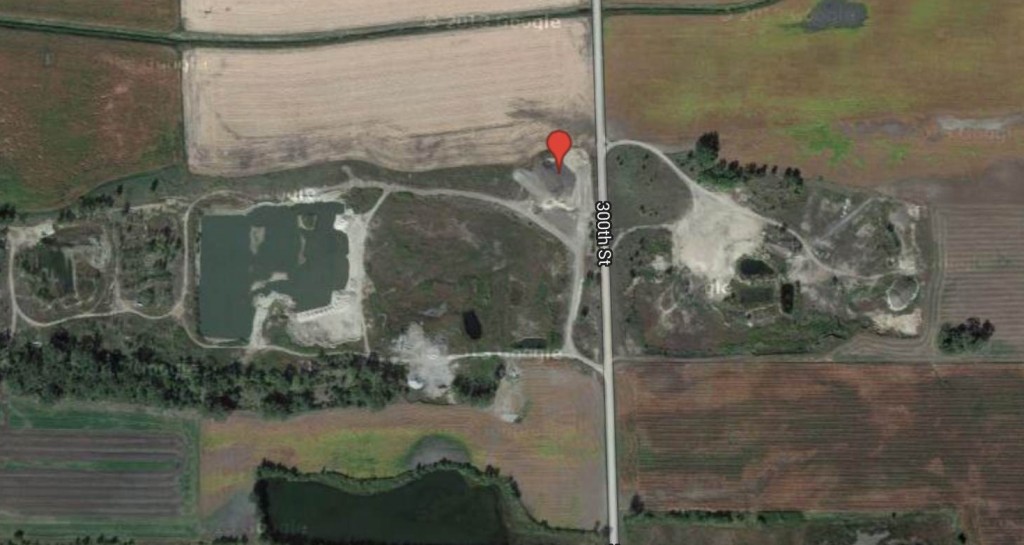 I checked out the gravel pit pictured above just a mile from where the Blue Grosbeaks were seen in 2012.  Almost immediately upon arriving I heard a singing male Blue Grosbeak. I was absolutely thrilled, even more so when I finally got to lay eyes on it. 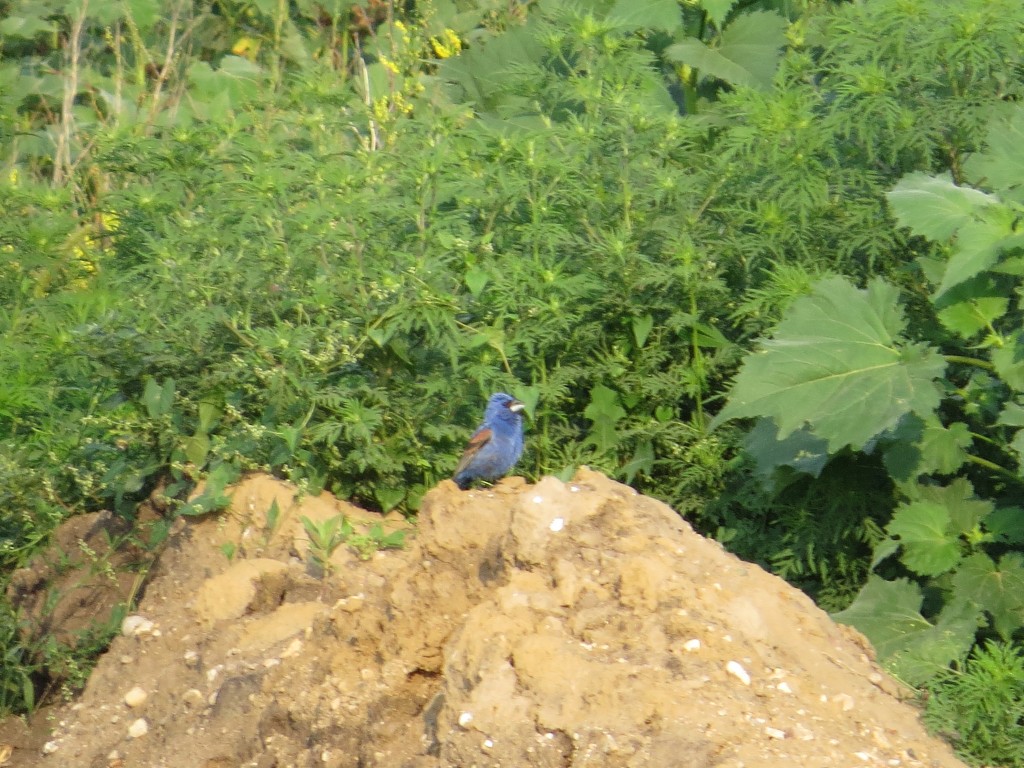 Blue Grosbeak at NE corner of gravel pit on west side of 300th St. just south of 840th Ave.

I was pretty pleased with the find and reported the bird to the listserv, MOU-net, so other birders could see it.  But after I was at home and studying satellite images again, I realized I didn’t fully explore the area.  It turns out that the pit I stopped at is part of about a four-mile tract of old gravel pits. I went back two days later intent to check out more of the area.  When I got to the site of the Grosbeak pictured above, I ran into Ron Erpelding and Herb Dingmann who had just seen the bird and were listening to a second bird nearly a mile away from the first one!  Now I was really excited to get my search underway.  I took every north-south road that intersected this tract of gravel deposits.  And on each road I found a singing male Blue Grosbeak!  With Ron and Herb’s bird, that made for five male Blue Grosbeaks. It was unbelievable yet believable because of the habitat I was exploring. 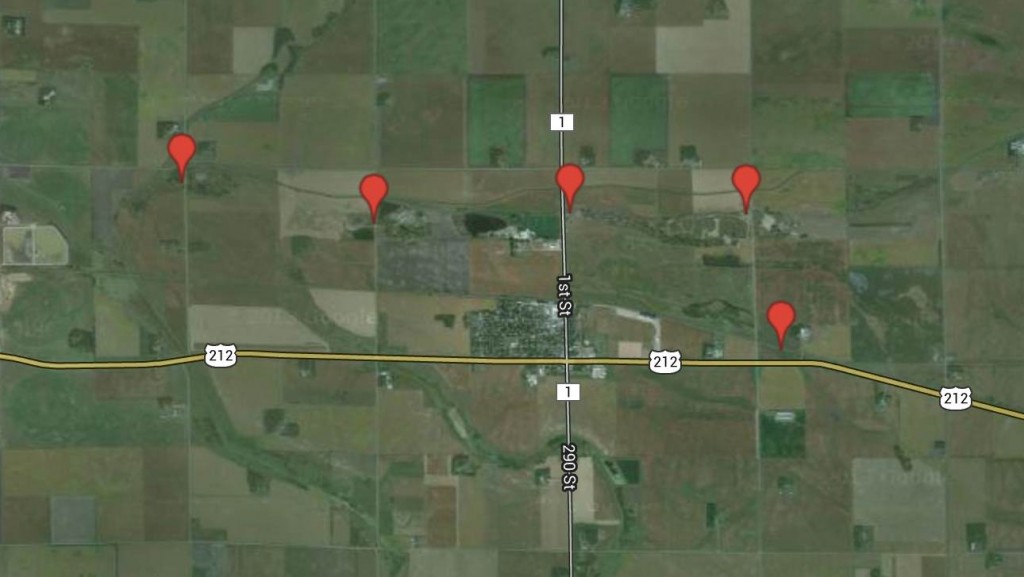 Locations of where I found Blue Grosbeak males; the bottom-right marker is the bird found by Ron Erpelding and Herb Dingmann 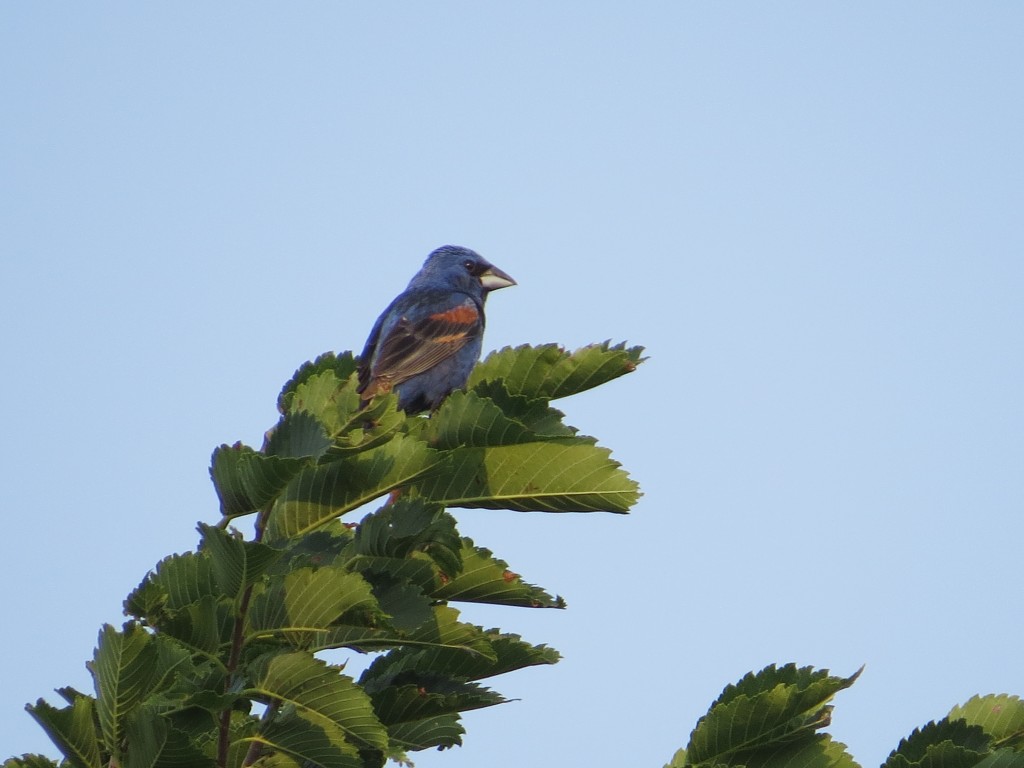 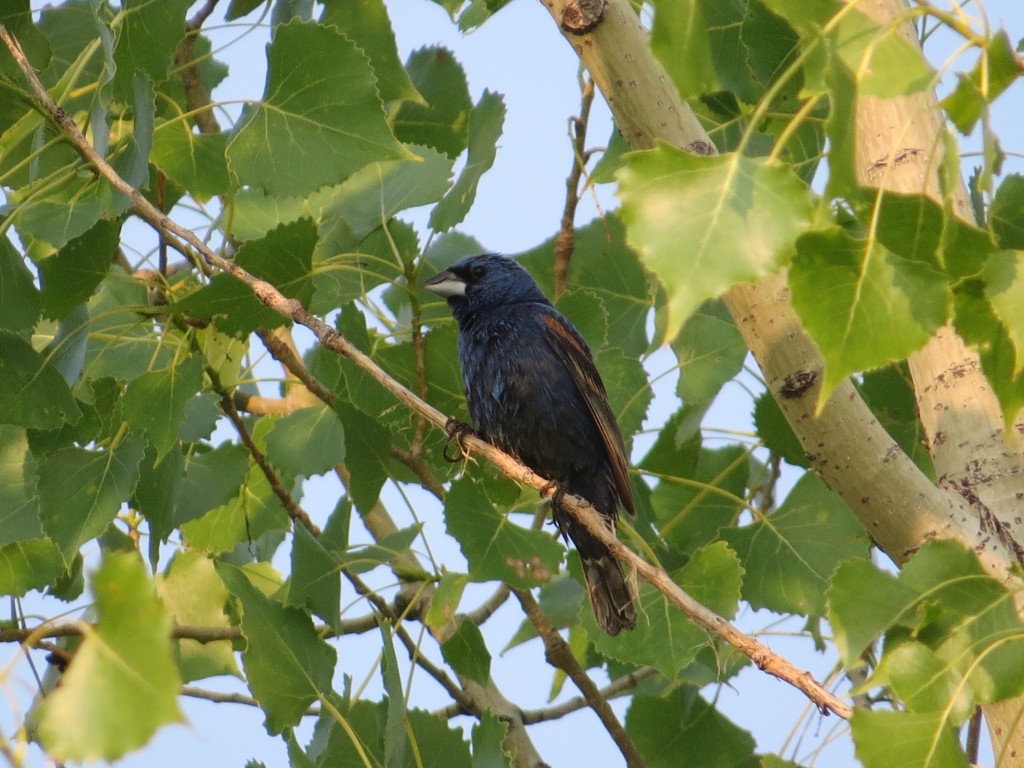 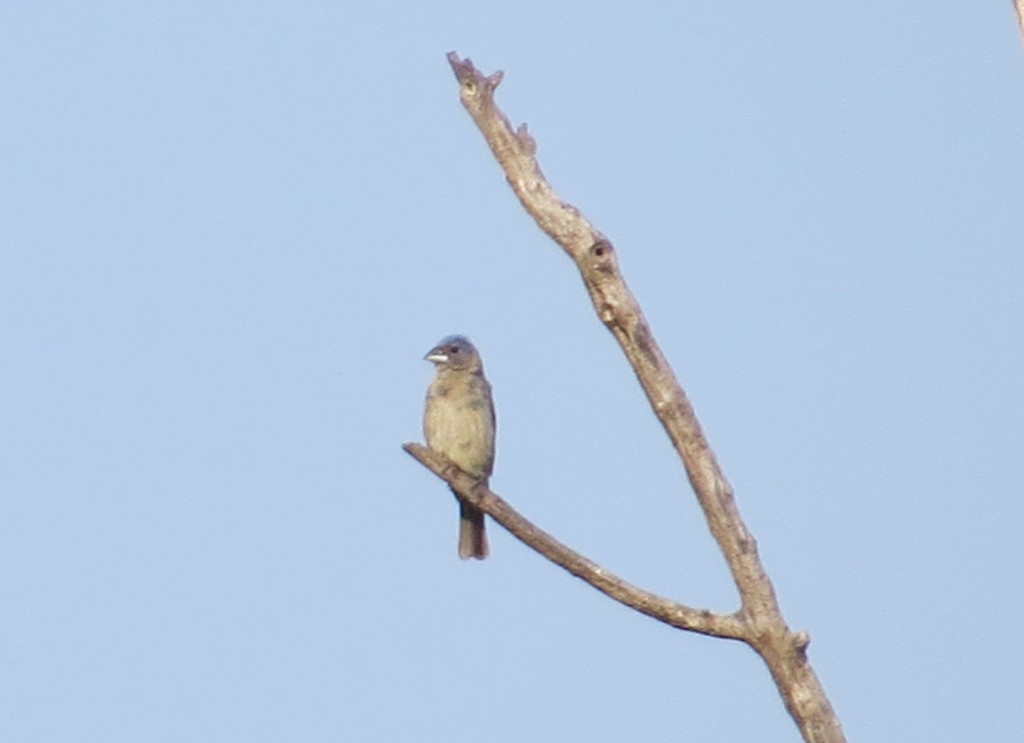 Several birders have made their way to Renville County to find some of these Blue Grosbeaks.  What has been phenomenal is that they are turning up more Blue Grosbeaks at these sites and in other counties while en route!  One was found in Chippewa County by Ron and Herb that same day, and a family of three was found by Ken Larson to the west in Lac qui Parle County.  With this volume of Blue Grosbeaks so far from Rock County, it seems that this species is definitely making its home further north and east than where it is “supposed” to be.  Any bit of suitable habitat in the southern half of the state should be investigated by Minnesota birders.  I have been studying satellite imagery for any hint of gravel or waste areas in area that is dominated by agricultural fields.  I’m particularly interested in finding one here in Kandiyohi County.  We are hopeful that one will make the jump six miles north if one hasn’t already. 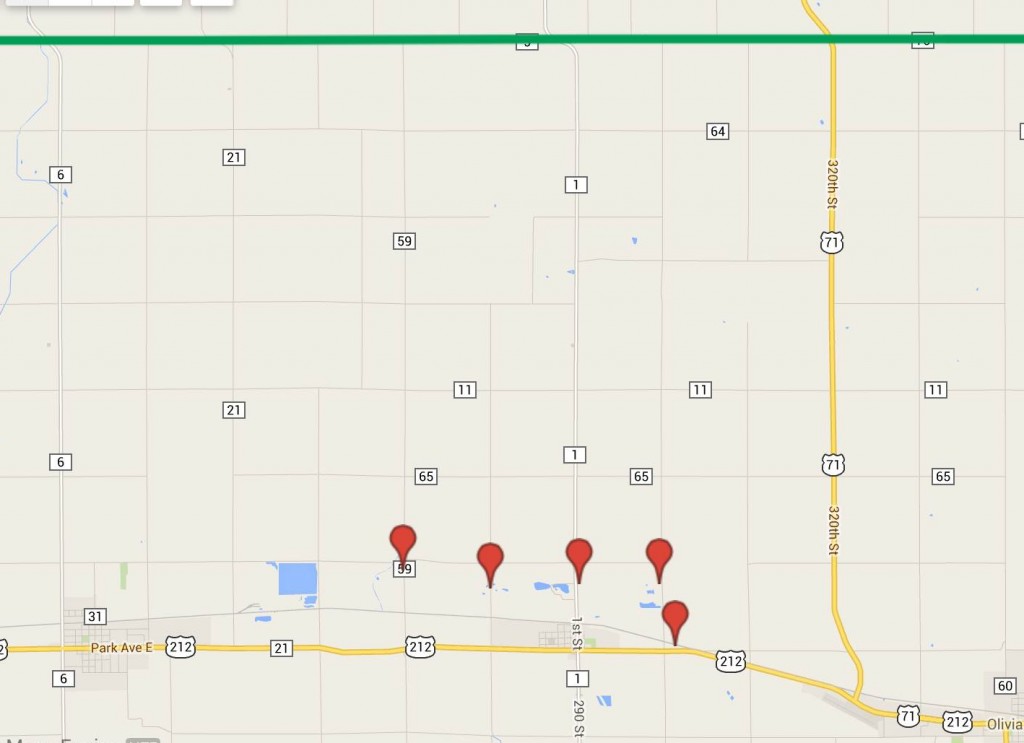 The green line is the Kandiyohi County and Renville County Line – Blue Grosbeaks are only six miles away!

The only problem, though, is that we have no gravel pits to speak of in the southern half of our county.  The best and closest habitat, a very large area of several gravel pits, is about 30 miles northeast of all these Grosbeaks. 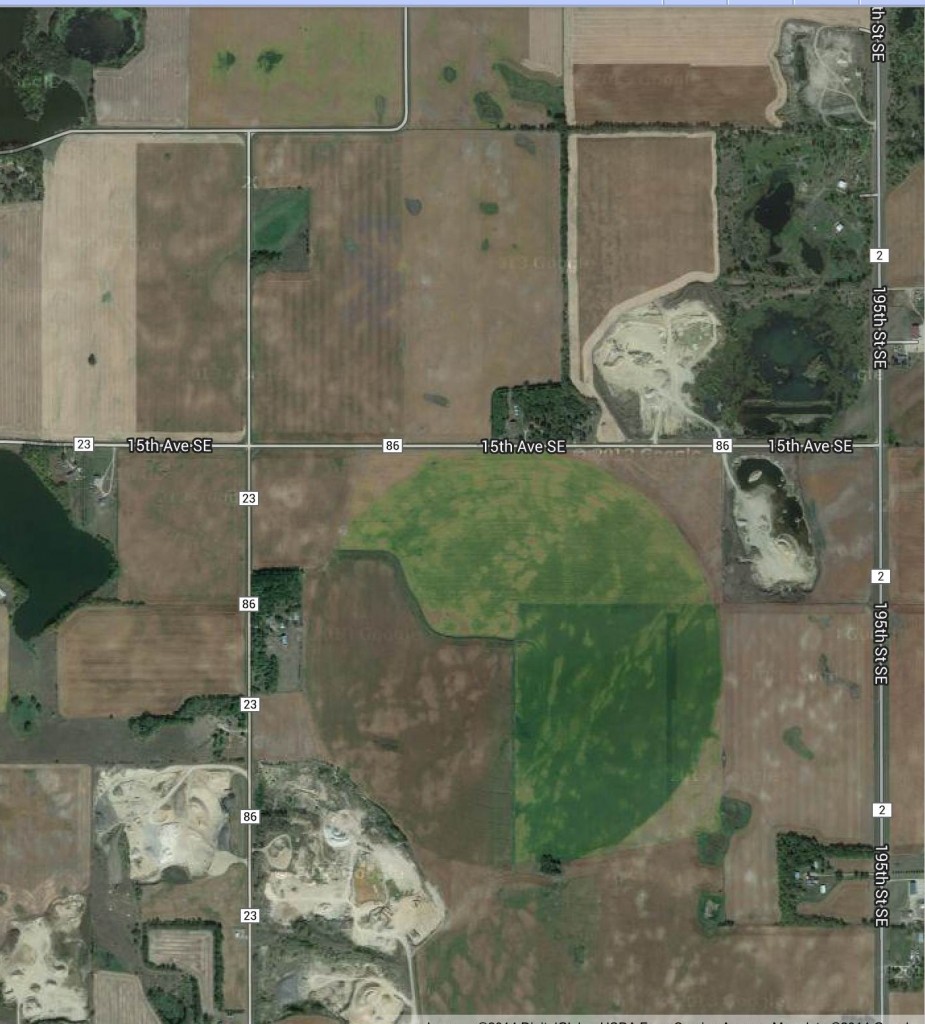 We have already been getting a lot of the necessary permissions to enter these lands to begin our search.  Hopefully we can turn one up.

It has been very exciting to not only see Blue Grosbeaks, but to be a witness to a potential range expansion.  Evan asked me the other day, “What’s the big deal about the Blue Grosbeak anyway, is it because it has that red wing-patch or something?”  Yeah, something like that.

Coming up: cool by-product birds from the Blue Grosbeak searches.