As I’ve mentioned in the previous post or two, it has not been my intention to push hard with the birding after the big trip West.  I’ve been meaning to slow down to be able to take care of responsibilities and enjoy other aspects of life.  Case in point was two weekends ago when Melissa and I decided to take the kids fishing.  I even left my camera at home so I wouldn’t be distracted with the birds.  Maybe, though, this was actually a selfish move because not having my camera pretty much guaranteed something would go down.  And that something wasn’t the bobber.  Fishing was lousy.  I could have just as well been birding or fishing–I had left my own pole at home thinking I’d be swamped with baiting three hooks, taking fish off three lines, etc (Grow up and help me out, Evan!!).

After trying Elkhorn Lake, we ventured up to the outflow at the northeast corner of Green Lake where people were fishing from shore.  While we were once again waiting for bobbers to go down, I had noticed some large, white birds flying in the distance.  Those are odd-looking Gulls, I thought.  They seemed really big, but their heads and bills were too small to be Pelicans. Hmmph, no long-range optics. Oh well.

Later on we were driving by the area where these “Gulls” had been, and I noticed some larger white birds resting in the backwaters off the Green Lake outflow.  Now I didn’t have my camera with the zoom capabilities, but I did have a pair of binoculars in the car–I always have pairs of them floating around both vehicles. I pulled the car over and took a look. I had to chuckle when I realized I was seeing a life bird when I never even intended to go birding.  Life birds are hard to come by these days in the state, let alone the county.  Getting a new one at home is a now a very rare treat.  Moreover, the bird I was looking at was one I’ve been waiting to see for quite some time.  It is one that is so exotic in name and looks that I was amazed when I first learned it could be seen in Minnesota–the Caspian Tern.  There were four of these large beauties (bigger than Mallards).  And I didn’t have my camera…

I asked Evan if he wanted to look through the binoculars to get a better look at the Caspians to which he responded, “What, are they those white things over there?  No, I’m good.”  Evan has always been fine with just a check mark for his life list.  Not me.  After I brought the family home, I made the 20 min. trip back so I could document this lifer. 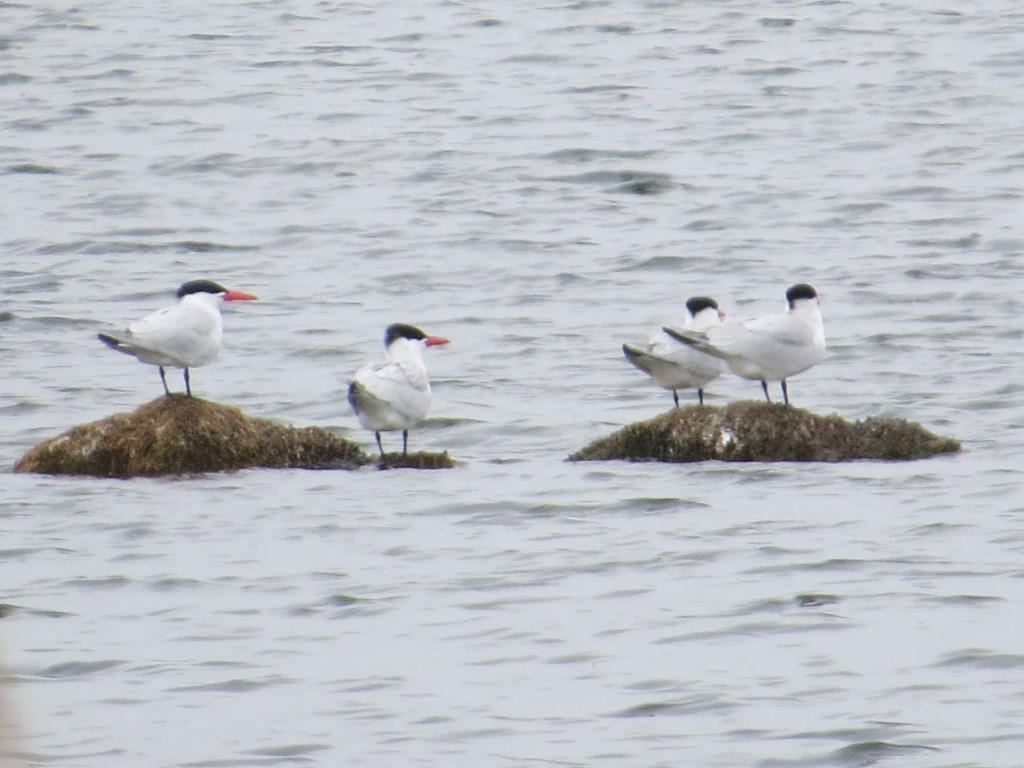 The Caspian Terns are so cool that when they’re in town, everyone has to get their photo taken with them. 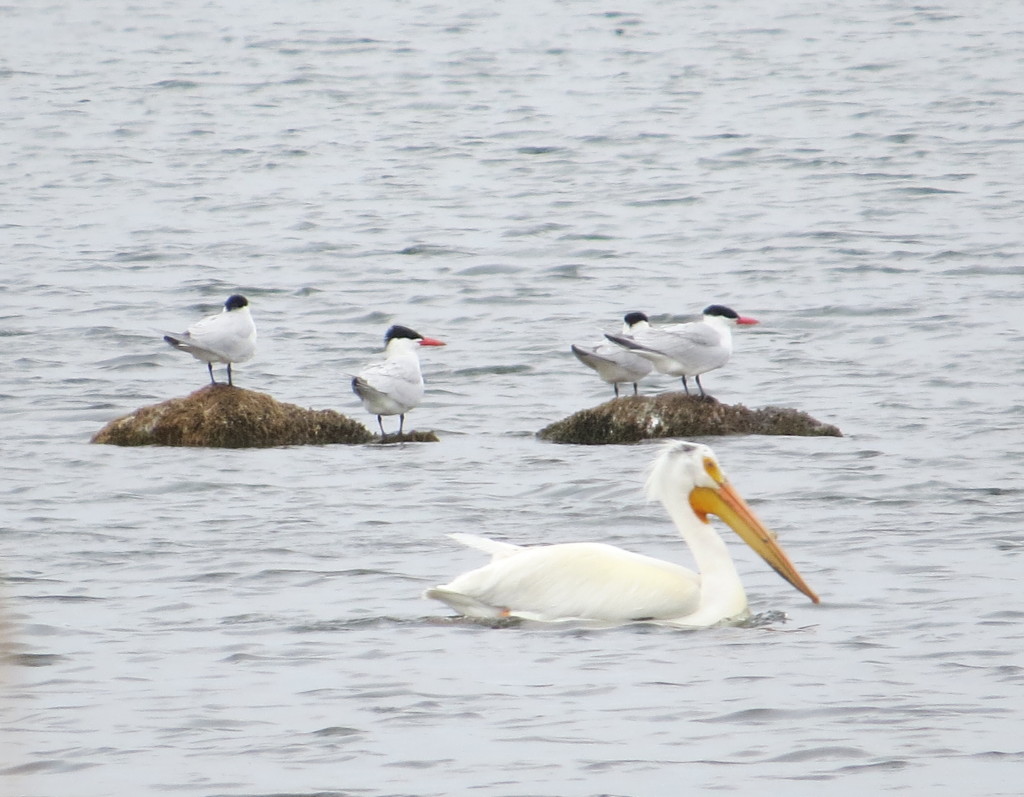 Even the COLO is not too coolo to become a bit of a xenophile around these visiting birds, posing for pictures with them and checking out the competition for best-looking water bird. 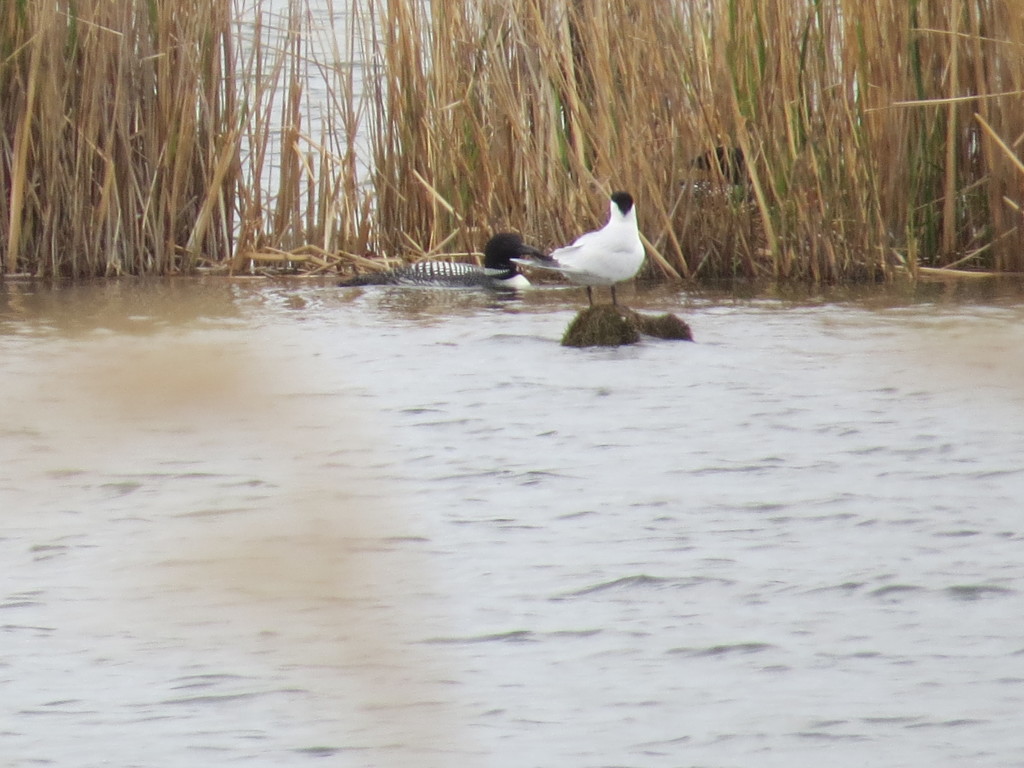 Keep on swimming, Chuck. You’re just a ‘common’, domestically-named bird; I, on the other hand, am exquisite. 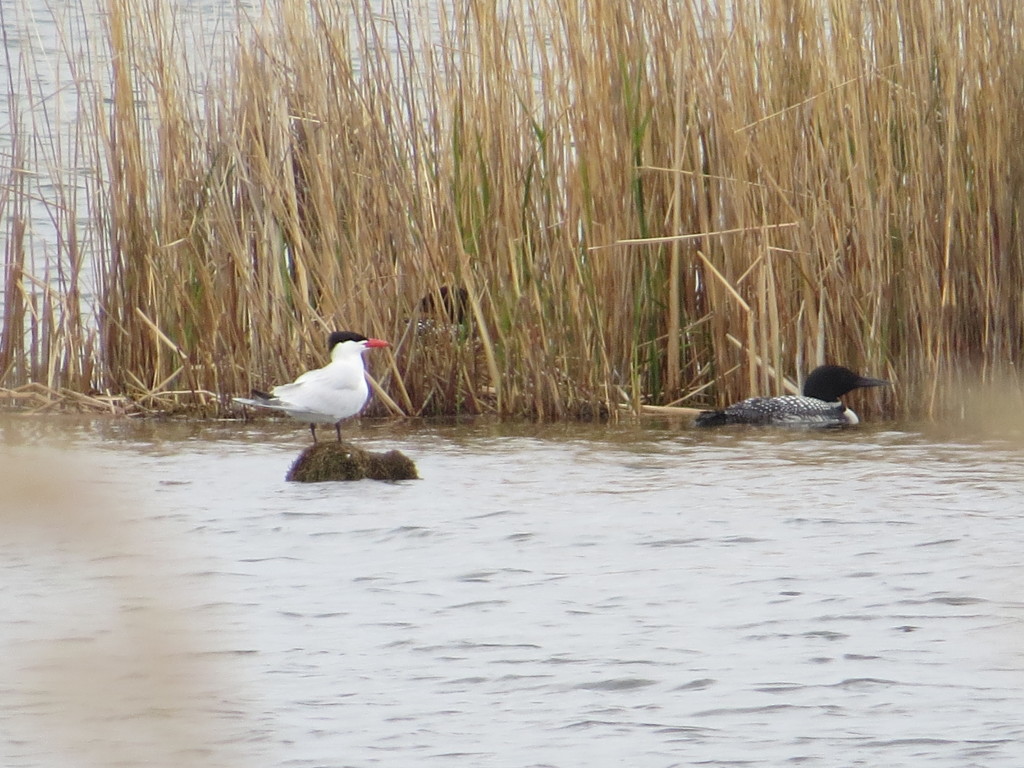 Wait, did you see it? I know my birder friends saw it.  I didn’t see it until I looked at my pictures.  Just to the right of the Caspian Tern’s head there is a second Common Loon sitting on a nest in the reeds!  How cool is that?! The northern half of Kandiyohi County is right at the southern edge of where our beloved state bird nests.  This was a sweet find on top of an already sweet find. 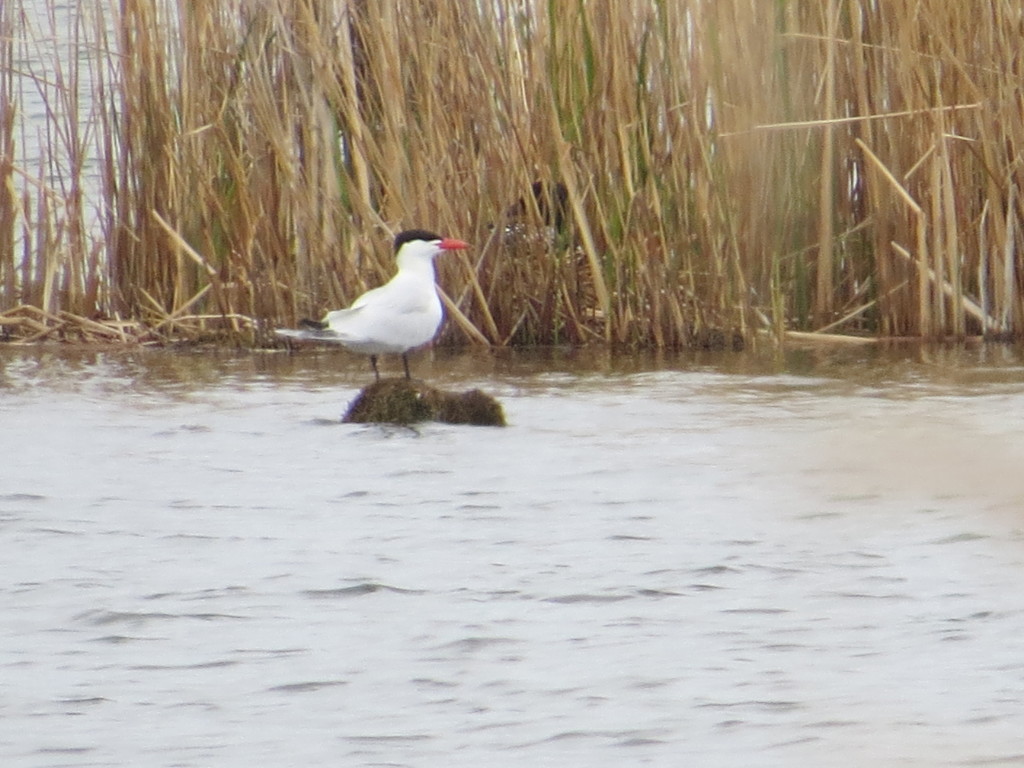 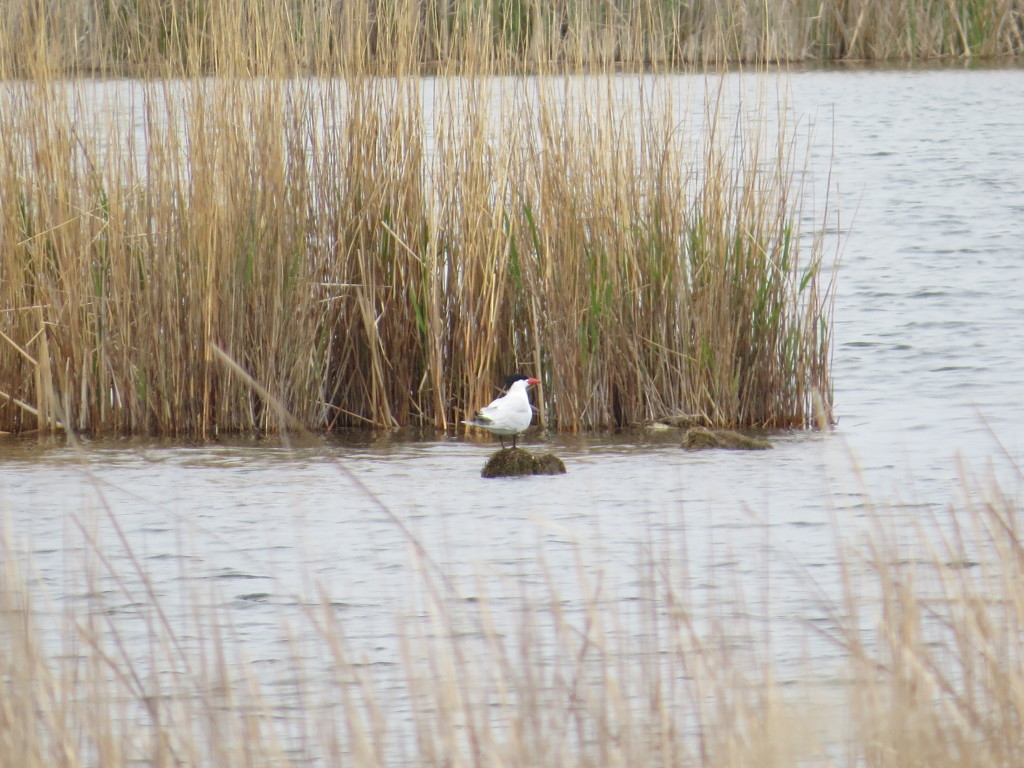 I also got to watch the Caspians take flight.  It was a good learning experience to see what they looked like in the air and hear their guttural calls. 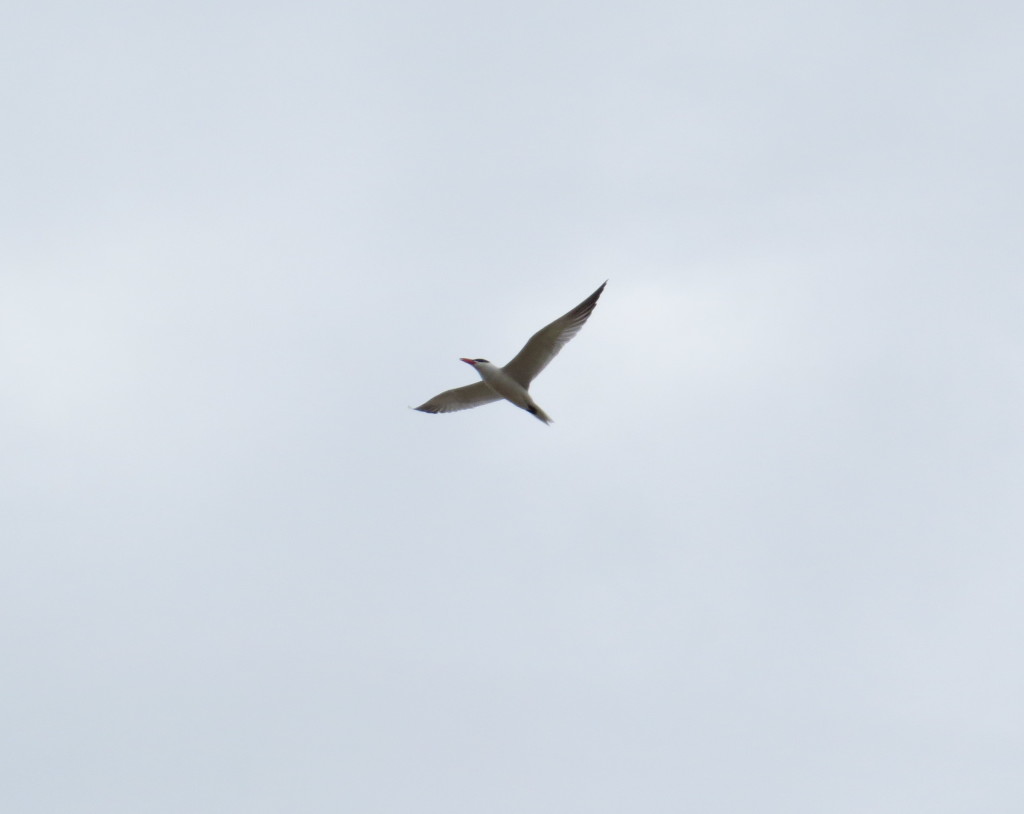 Can you see why I thought they were Gulls from a distance? 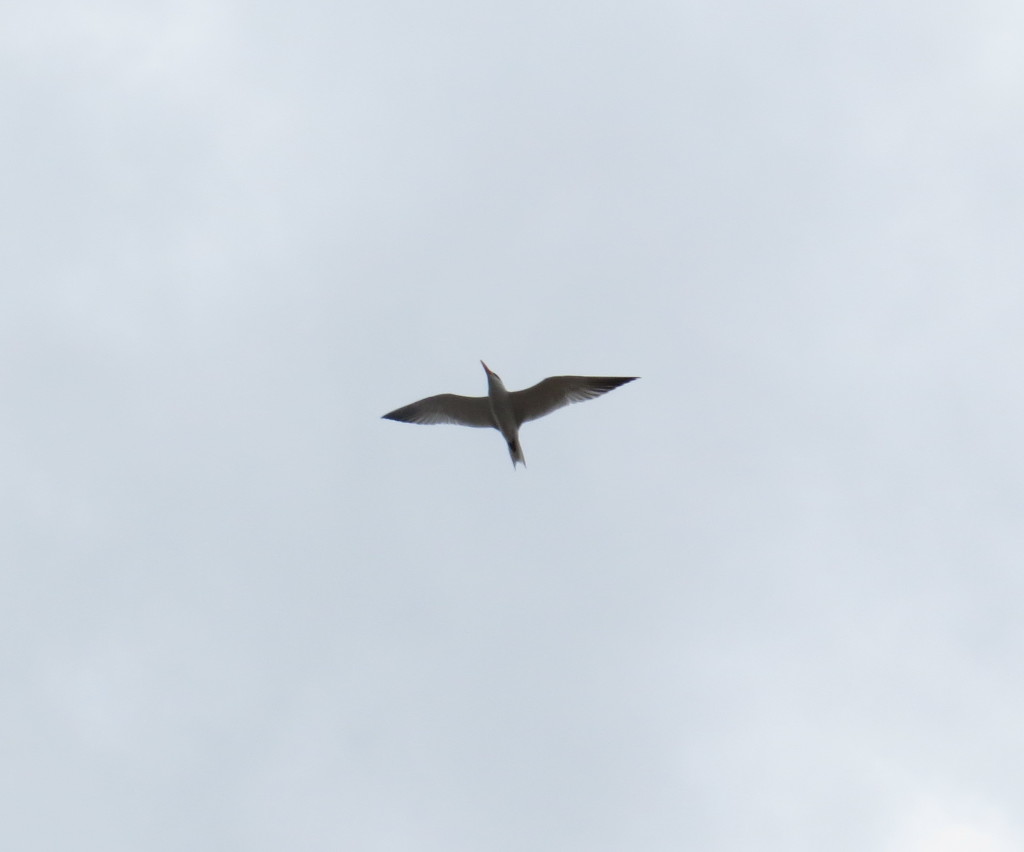 Every birder knows the law of lifers–once you finally get it, you never have trouble seeing it again.  Terns out that I’d be putting this study of Caspians in flight to use several days later on the next adventure when I spied two flying over while I was filling up the car at a gas station. 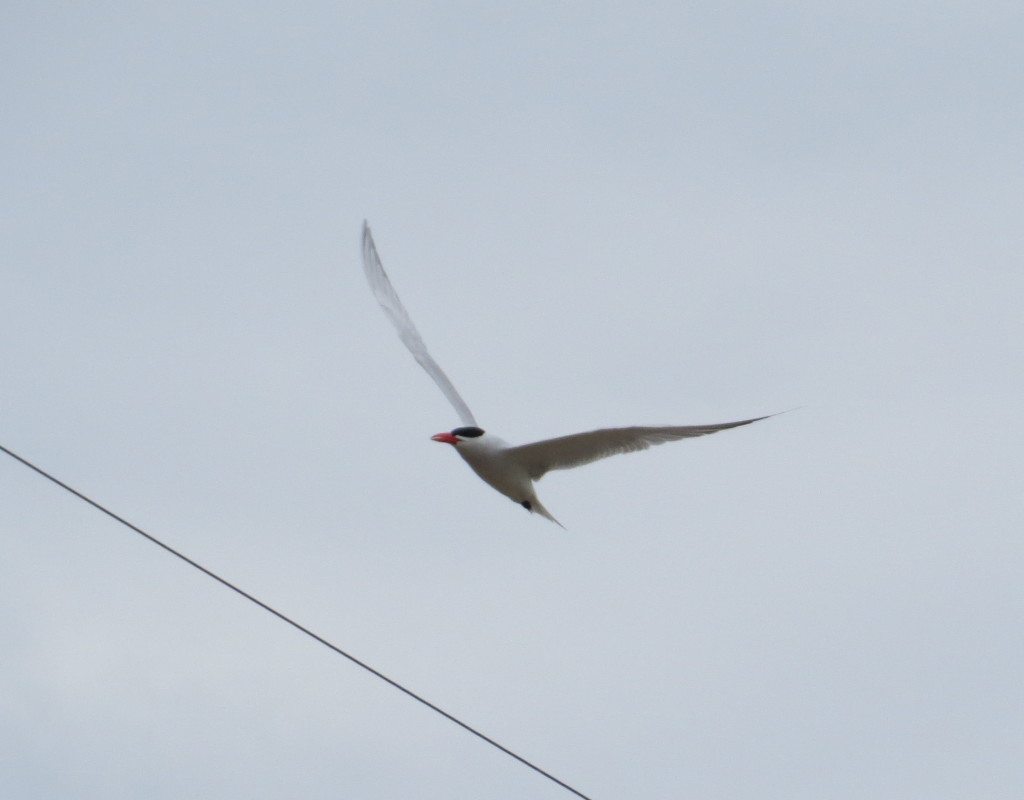 This was a most satisfying lifer.  It was a much-wanted bird on our soil…er, water.  Believe it or not, but there’s been a lot more lifering since the Caspian Tern, even another one here at home. With some hot night-birding, a giant shorebird grab, a Colorado trip, AND Scarlet Tanagers TEN minutes from home, the stories are stacking up and quickly becoming more prolific than Stephen King novels. Much, much, much more reading ahead–so much for a quiet period in my birding and blogging.  Oh well, I’ll try to make the most of it. 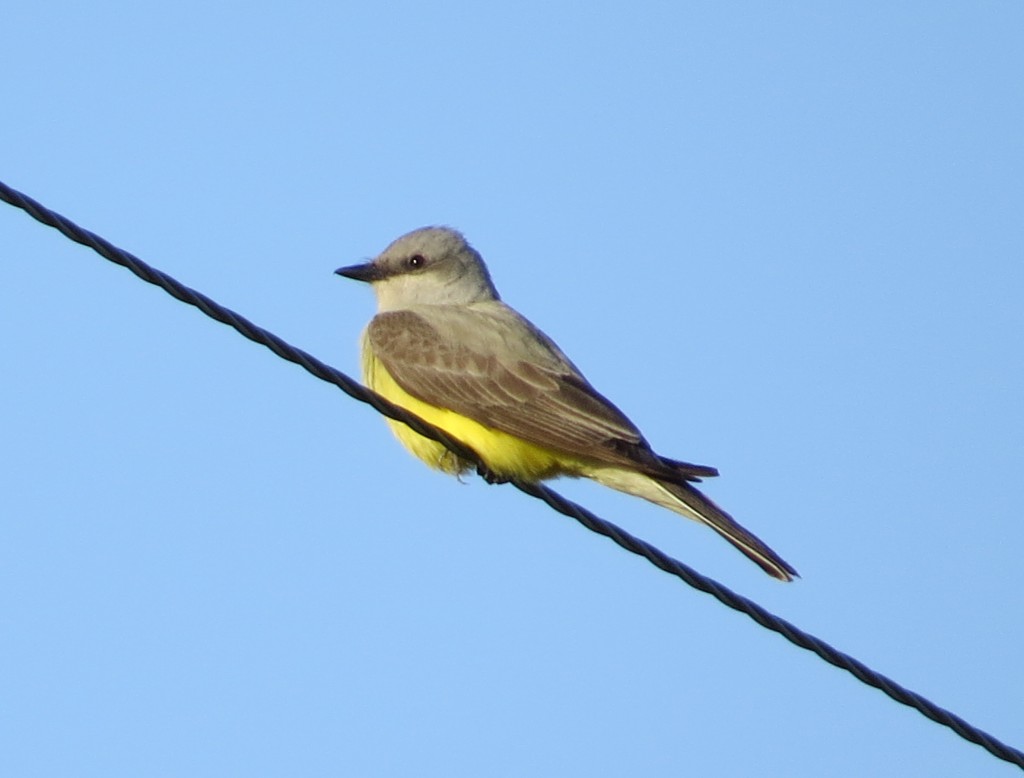 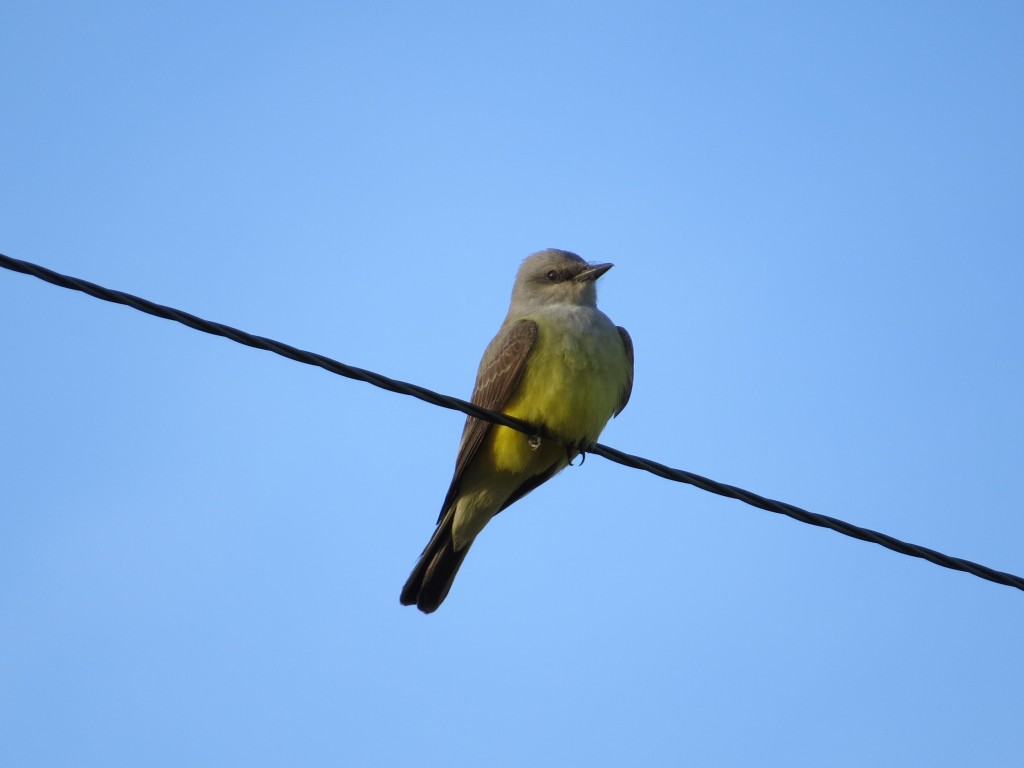 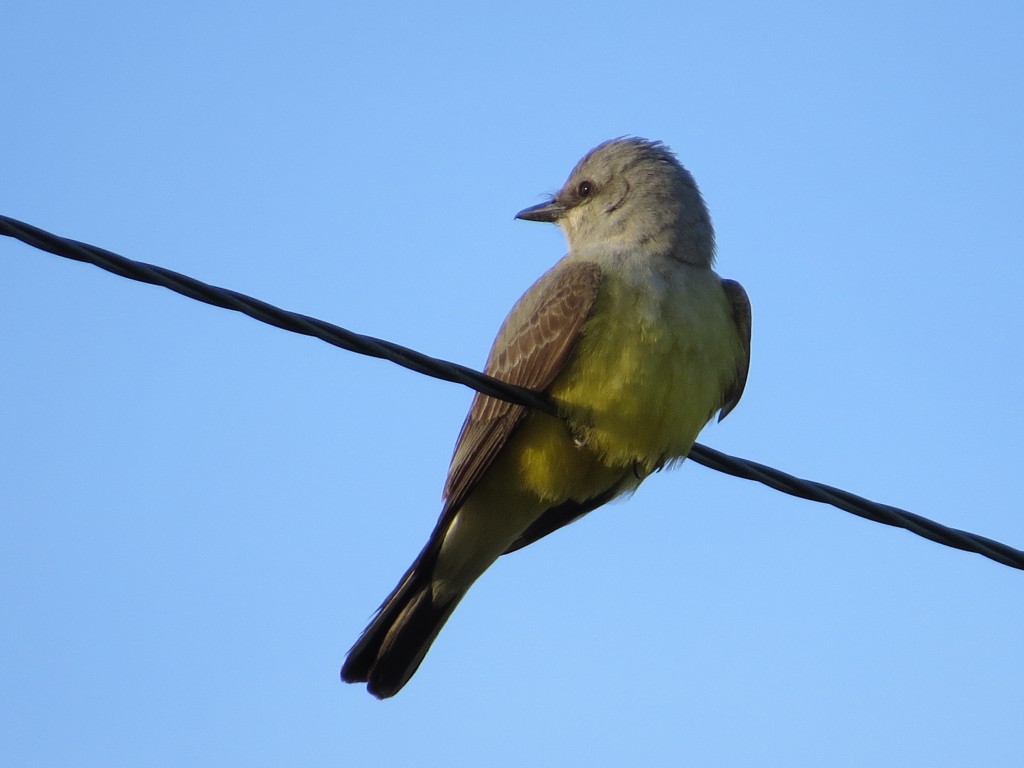 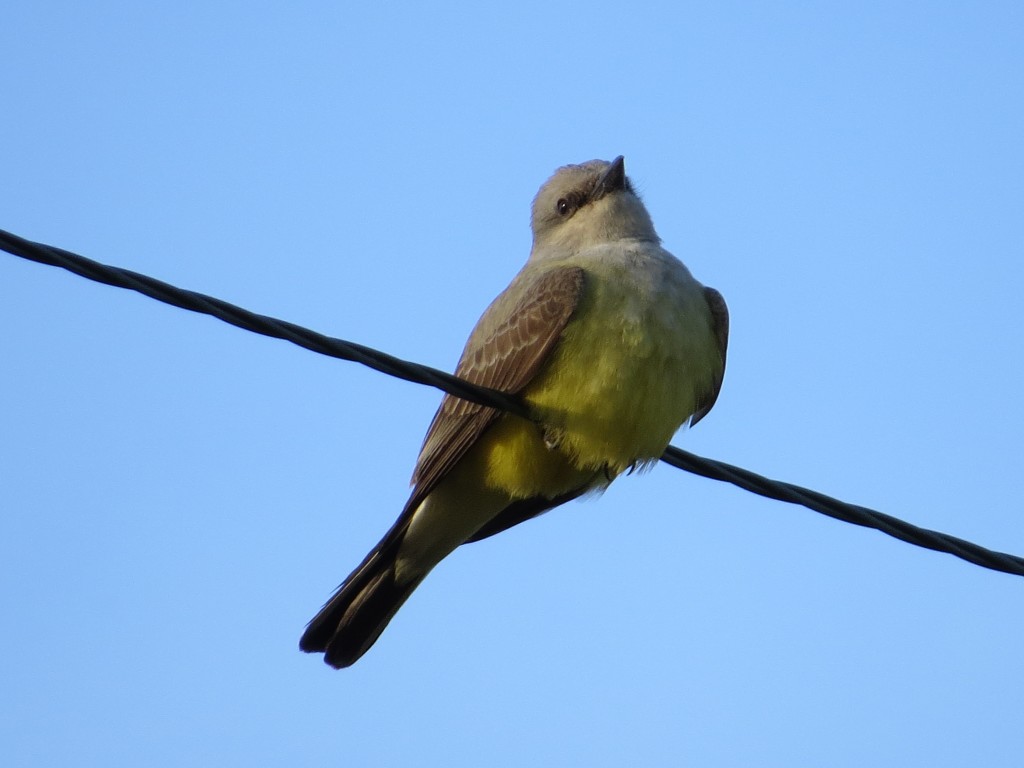 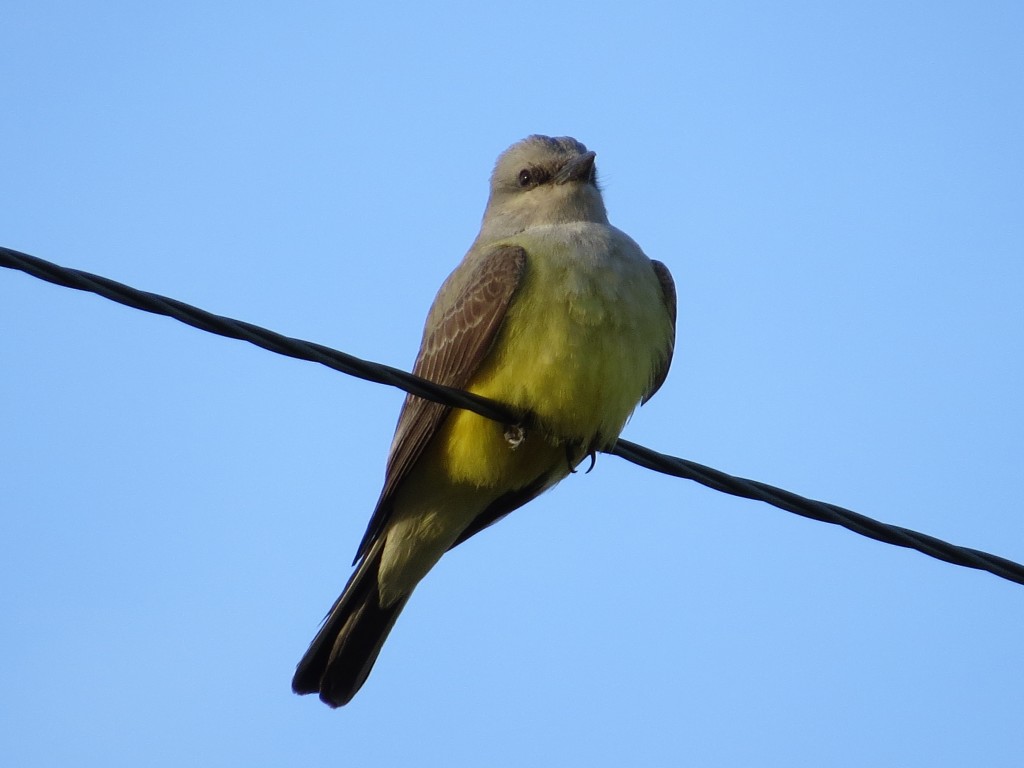 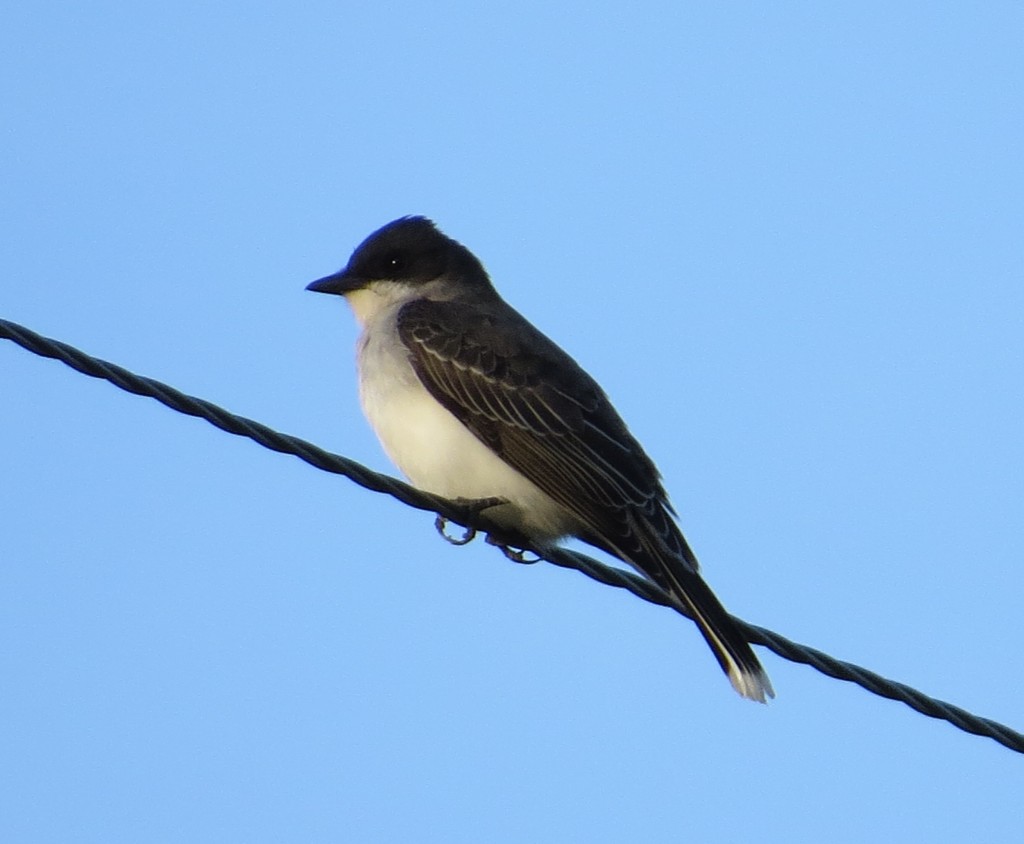 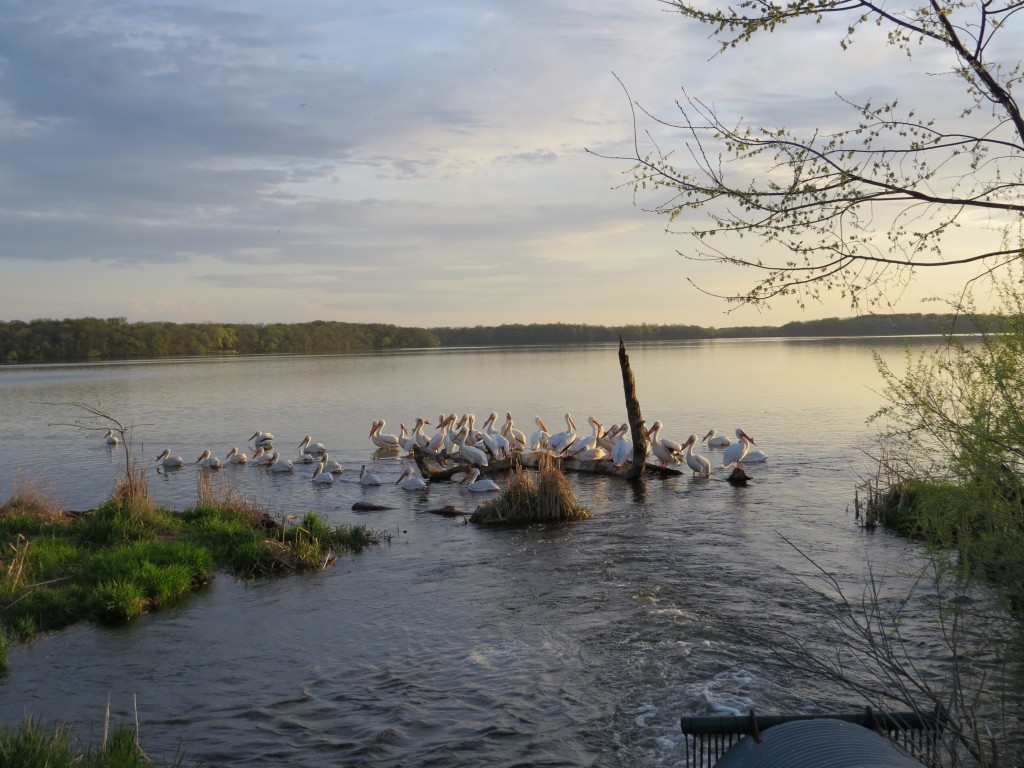 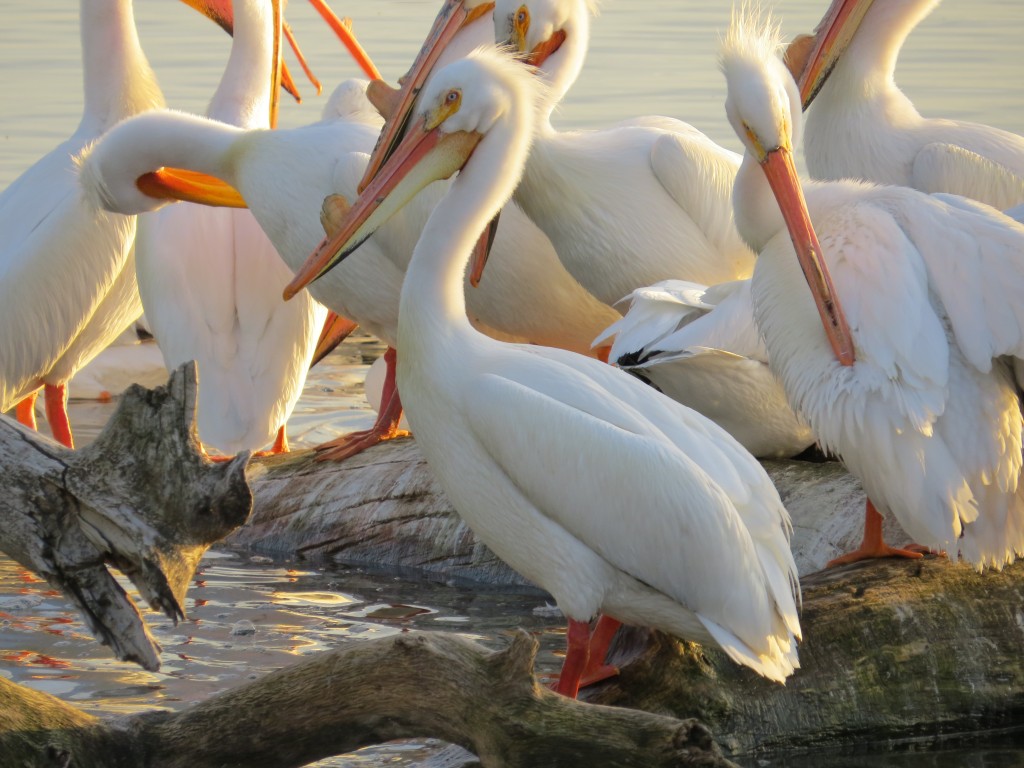