As it’s been stated here before, 2017 is mostly about taking care of business here at home, mostly in the Owl Dept. There are four regular species, either residents or migrants, that were missing from my county list prior to the start of the year: Short-eared, Long-eared, Eastern Screech, and Northern Saw-whet.  These have been my most wanted county birds as of late.  The Short-eared was knocked off in short order on the first day of the year, filling a major void and leaving only three more.  One could sit around and wait on news of a serendipitous encounter for those others, or one could get out there and try to make something happen.  Never one for patience, I often choose the latter, drawing inspiration from intrepid Owlers like Tommy DeBardeleben and Jeff Grotte.

So along with buddy Steve Gardner, I’ve been getting out there.  On one recent excursion, Steve and I stumbled into the biggest cache of whitewash and small owl pellets we’d ever seen.  Actually, I don’t think we’ve ever found Owl evidence before. Four roost sites in all in one small stand of Red Cedars got the owl juices flowing fast.  Steve and I expected to come face-to-face with a Saw-whet at any moment.  While we came up empty, we were excited nonetheless to find such evidence and be in hot pursuit.  Steve and I have been on many, many fruitless Owl hunts together in the past.  This may have been a turning point for us…

A week later I was itching to get back to this site to take another look around. In the meantime Steve and I had both received intel on some Long-eared Owls in another part of the state.  Never having seen one before, Steve wanted to pursue those and invited me along. I declined, opting instead to spend my birding time that day looking for a county Saw-whet back at that spot. Well, Steve and I both saw Owls in our respective locations that morning, but his Owls were much cooler than mine: 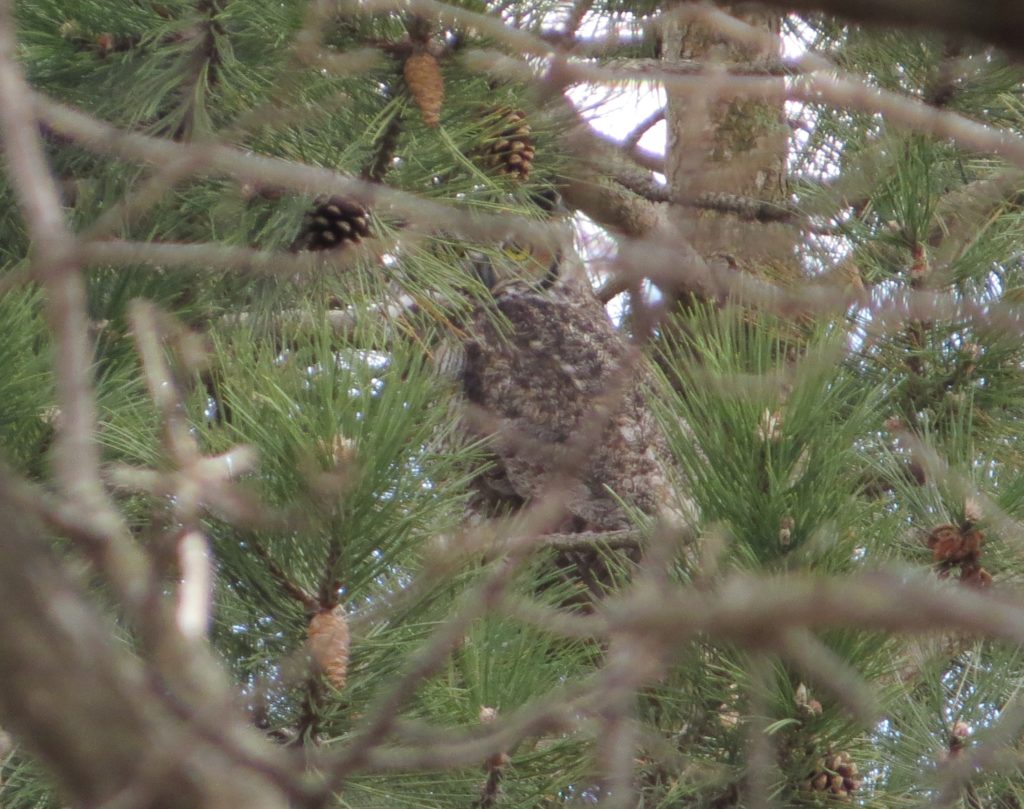 Any Owl sighting makes for a fun outing, even if it’s not post-worthy. But Steve’s lifer LEOWs were post-worthy, and something about his post caught my attention: he had seen his Owls in a plantation of Spruces. I had associated LEOWs mostly with Cedars. A connection was made in my brain, and I asked Steve how the site he was at compared with a plantation of Spruces in our county that we have unsuccessfully Owled a few times. Steve said they were very similar. Plans were made immediately to check it out the next day. It had been over a year since we last tried for Long-eareds at that spot.  It was time to hit it again.

That next afternoon, Steve and I met up to walk this Spruce plantation, walking abreast down the lanes between the tree rows. And I kid you not, 30 seconds into our walk, Steve hollered out that Owl flushed from a tree in front of him and was coming my direction. We both knew what it was instantly–too big for a Saw-whet, too small for a Great Horned, and wrong habitat for a Short-eared and Eastern Screech pointed to one bird only: Long-eared Owl!  We were stoked to say the least. Whenever the Owl flushed it would always land a short distance away and was unwilling to leave the stand of trees. This further proved we were dealing with a LEOW since GHOWs make fast beelines out of an area when they flush covering a half mile or more. One time this LEOW even went out of the grove, circled around looking at us, and re-landed only to disappear.  I got a good look that time.  We were too amped up and excitedly talking to put on a quiet stalk. Finally, finally, Steve and I had a successful Owl hunt!

As we continued to try to re-see the bird and hopefully get a look at it perched, we encountered piles of Owl sign–whitewashed trees everywhere and pellets scattered all over the place like popcorn on a movie theater floor. We also found the smoking gun of LEOW evidence: the remaining wings of our newest county bird’s predated partner: 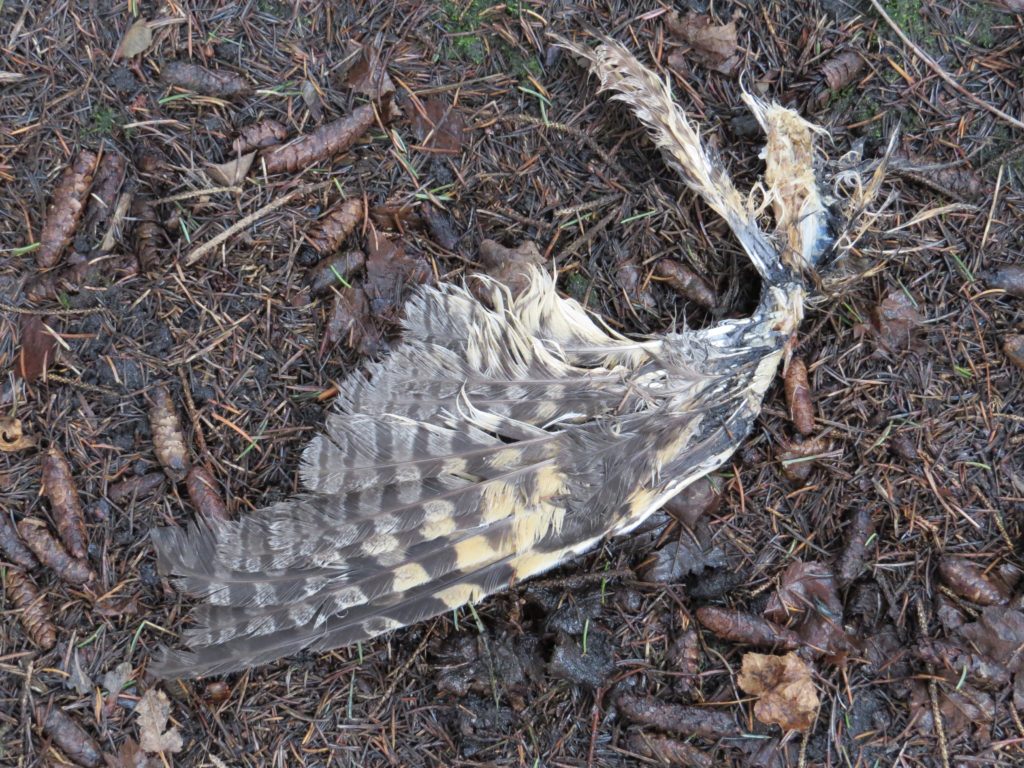 We did flush it a couple more times but eventually decided to move on and give up on seeing it perched.  Even still, the victory was immense. Steve said it best when he said it was cool that we did not have to rely on anyone else for this bird.  I couldn’t agree more.

The Owling didn’t stop there.  Steve and I found some Red Cedars in the area to check for Saw-whets. Once again, we found heavy evidence that Saw-whets were/are in those trees.  Then we later flushed a Great Horned Owl and wondered if the Saw-whet(s) had gone the way of LEOW #2.

The next day I was able to revisit the LEOW site with some other local birding friends who had never seen one.  Two Great Horned Owls flushed right away giving everyone a false start.  As we got near the end of our respective rows of trees, conversation picked up among the others and I got the impression they thought this would be a non-event.  From the previous day’s experience, I knew that it wasn’t over until we actually emerged from the trees.  I kept up my constant scanning of every tree I quietly and slowly walked by. Then I nearly lost my breath when I spied the tall, skinny Owl near the top of a tree looking down at me!  I quickly snapped a photo of the shadowed tangles it was buried in, not even able to see the Owl in my viewfinder. 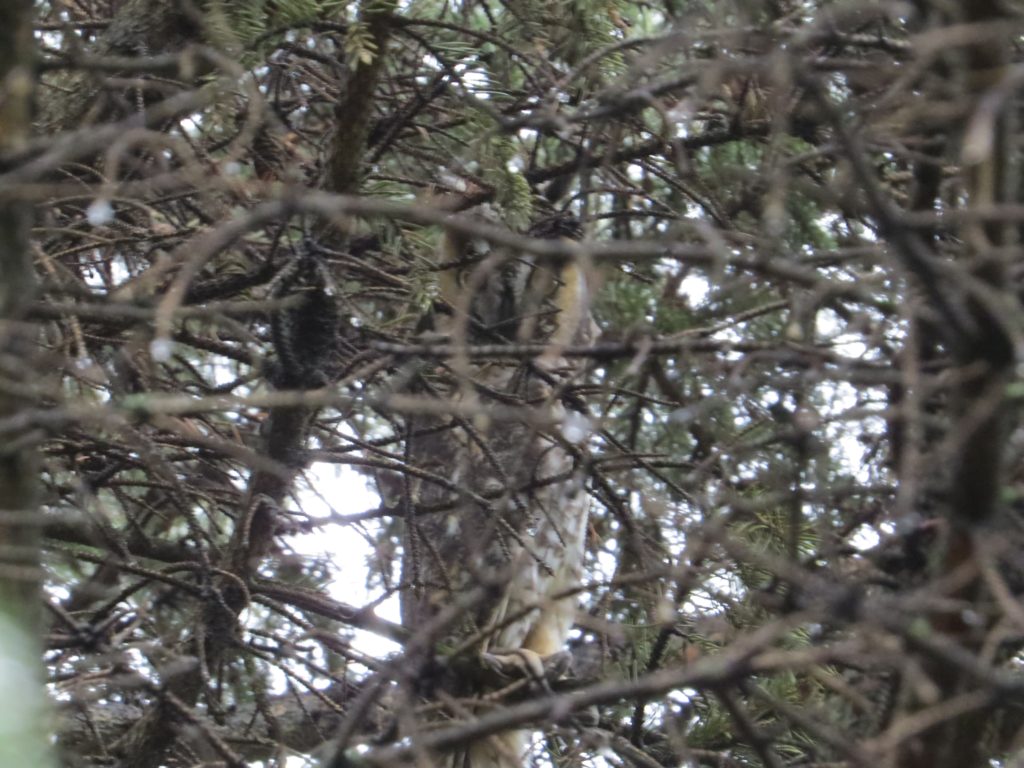 This was the final, definitive proof that Steve and I had seen a Long-eared Owl the day before.  And, man, did it feel good. 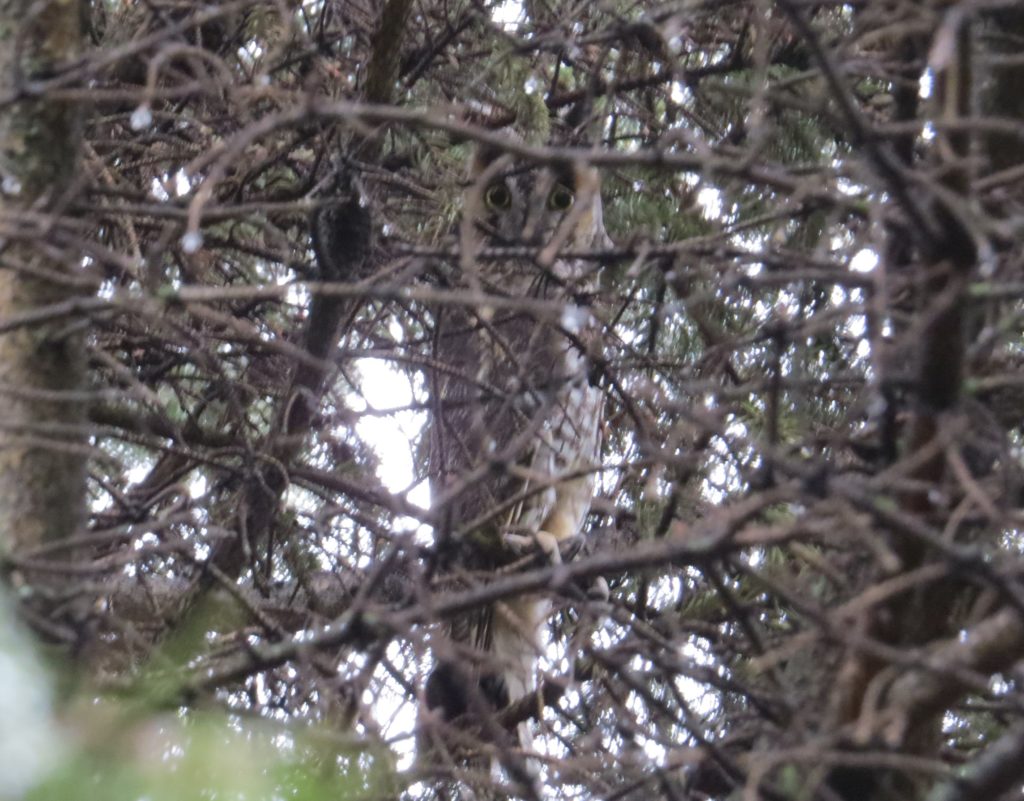 At this moment in the adventure I was multi-tasking, trying to get photos while snapping my fingers and whispering to get the attention of my fellow birders.  I never got them on the bird before it flushed, but everyone was able to eventually see the Owl.

Nothing beats finding Owls on your own and having a local spot to go see a cool species like this.  Now, if only the resident GHOWs will leave this bird alone… 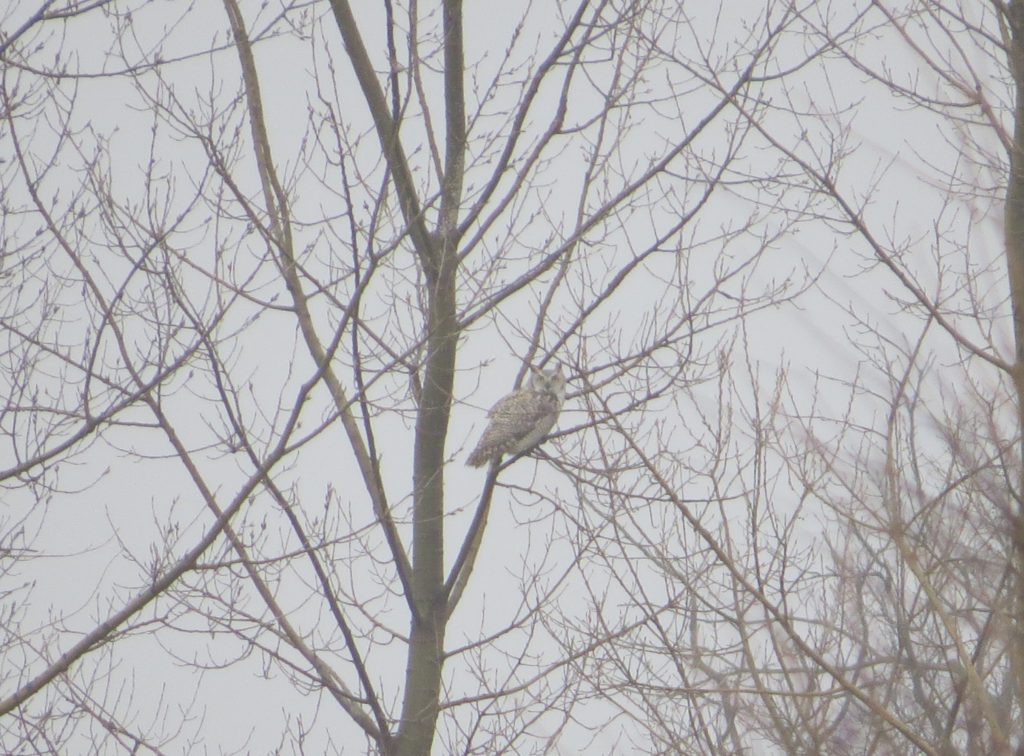 Are the Owl adventures over? With 2 of my 4 wanted Owls knocked off in February already, I think we are just getting started.