‘Tis the season when we load up the vehicle with kids and dogs and gear to make the long trek up north for Thanksgiving.  Or, this year it was load up the van, have the van die in the garage because of a failed alternator, unload the said van, and re-load the contents into the much smaller SUV and hit the road with minimal disruption to the planned schedule.  Such an ordeal is stressful enough, but to the birder who knows the Sax-Zim Bog is en route and who knows that many owls have been seen there recently, it was especially stressful.  I was hoping to pass through the Bog before we got to Mom and Dad’s who live just 40 minutes north of the Bog, but the vehicle dilemma was putting all of this in doubt.  It turns out that I was able to get us reconfigured or crammed, rather, into the new mode of transportation, and we were only delayed by an hour.

I hadn’t mentioned to Melissa that I wanted to pass through the Bog which seriously only adds about 5 miles to our trip.  Notice I did not mention how much time it can add. 🙂 Anyhow, as we were driving into the north country Melissa read my mind and said, “I suppose you want to bomb through the Bog on the way home.”  Isn’t she great? I didn’t even have to ask.

So that’s what we did.  Heading down Arkola Road from Cotton we had some nice birds to see right away on the road as we flushed a small flock of Pine Grosbeaks and some Common Redpolls. But we were not here for the piddly stuff and were instead here for the big game of birding, Great Gray Owls.  Birders had been seeing them out on the roads much more regularly now with the winter weather upon us.  From what I’ve gathered, I suspect that a family of resident Great Grays had been frequenting a couple roads quite regularly.

Regular or not, I wasn’t taking chances as I had my secret weapon along — Melissa is our chief owl spotter.  She found all five Great Grays in Aitkin last December, and she found most of our Burrowing Owls in Arizona last March.  She’s good, and I was happy to have her along to help.  Plus I think she likes the thrill of the hunt.

As we cruised along the spruce-lined, gravel road at 5 MPH straining to pick out one of these well-camouflaged birds, an enormous bird flushed from the spruce trees on my left and flew a short distance before disappearing into the dark swamp forever.  The view was brief but undeniable – Great Gray Owl!  It was a thrill, but a cheap one.  We were also after good looks at these amazing creatures.  I stopped the vehicle where he went into the woods and looked, but it was useless as you couldn’t see into the thick spruce bog.

Oh well. We kept on cruising.  Then all of the sudden I saw another Great Gray Owl flying low above the ditch on the right side going straight away from us! Then it crossed the road and set up in the trees on the left side of the road, but we didn’t see exactly where it perched.  This stand of trees was thinner, and I knew we would eventually spot it. “There it is!” shouted COS. 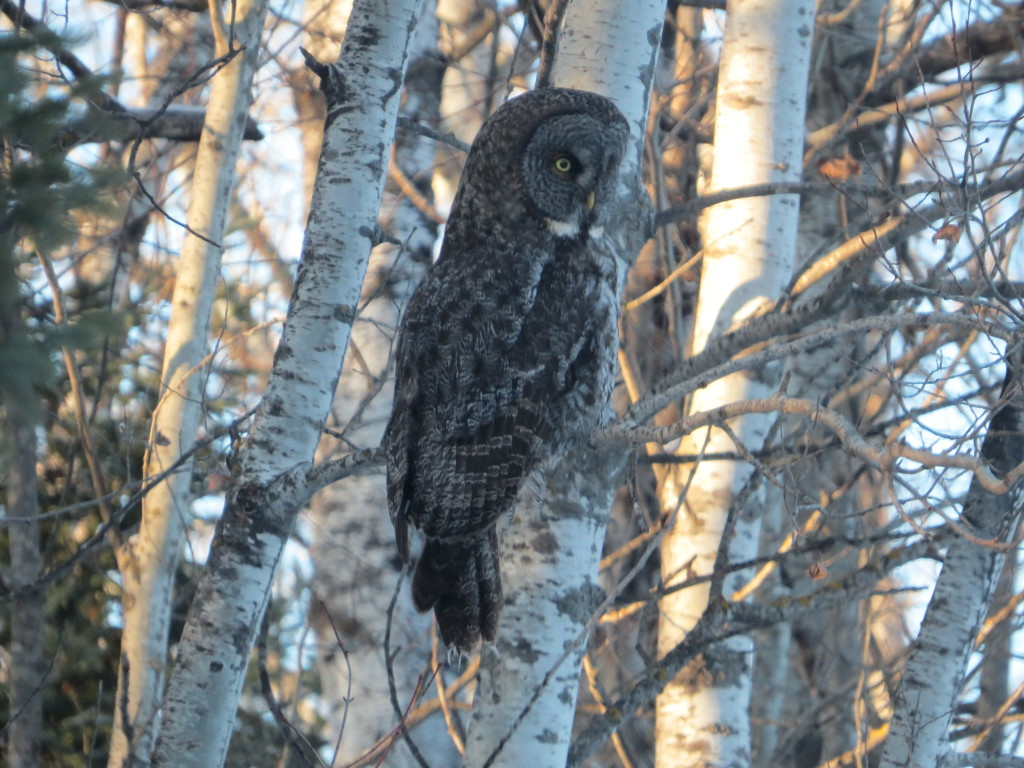 Everybody, including the two dogs, were excited.  As we were making exclamations in the car, Chance couldn’t handle it and tried to come up and over the rear seat which caused Marin to scream.  I immediately threw the car in reverse and got far away from the owl so I could solve this unexpected by-product of an owl-spotting without spooking the owl that caused the spotting.  Once everybody and every dog was calm and its place, the owl-enjoyment began again.

My experience with Great Grays is that they really don’t care about you.  They’re going to do what they need to do whether they are being watched or not.  This owl was constantly moving around and looking for places from which to hunt meadow voles. 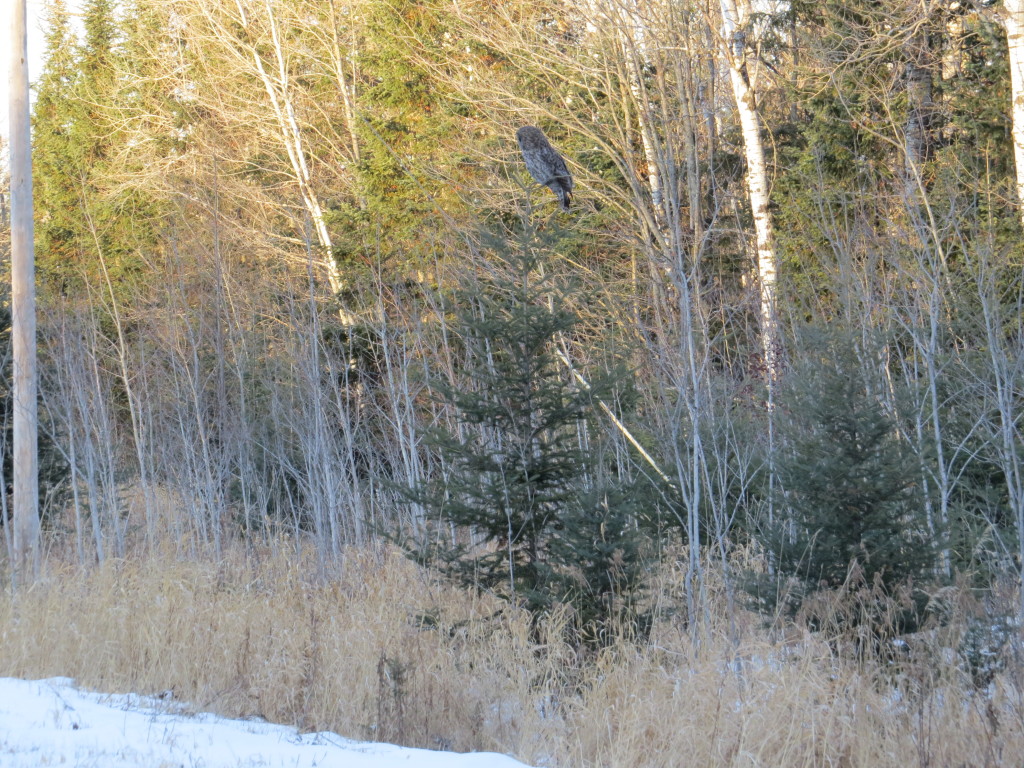 Great Grays have incredible hearing and can hear the voles running under the snow. We saw this one go down a couple of times.  It wasn’t successful.  Given that this owl did appear on the small side and that it wasn’t a skilled hunter, I’m guessing it was a young bird. 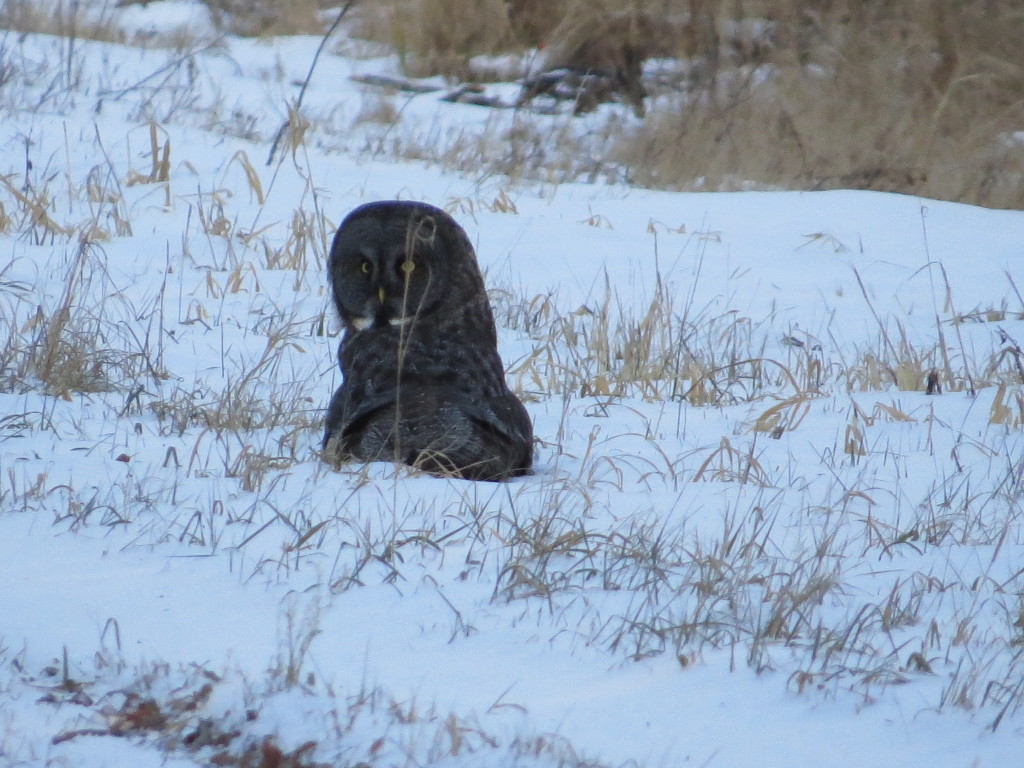 He never stopped trying, though.  Every time it flew, we remarked how spookily and silently they move.  At one point it flew right toward us and just to the side of the car before finding this new perch. 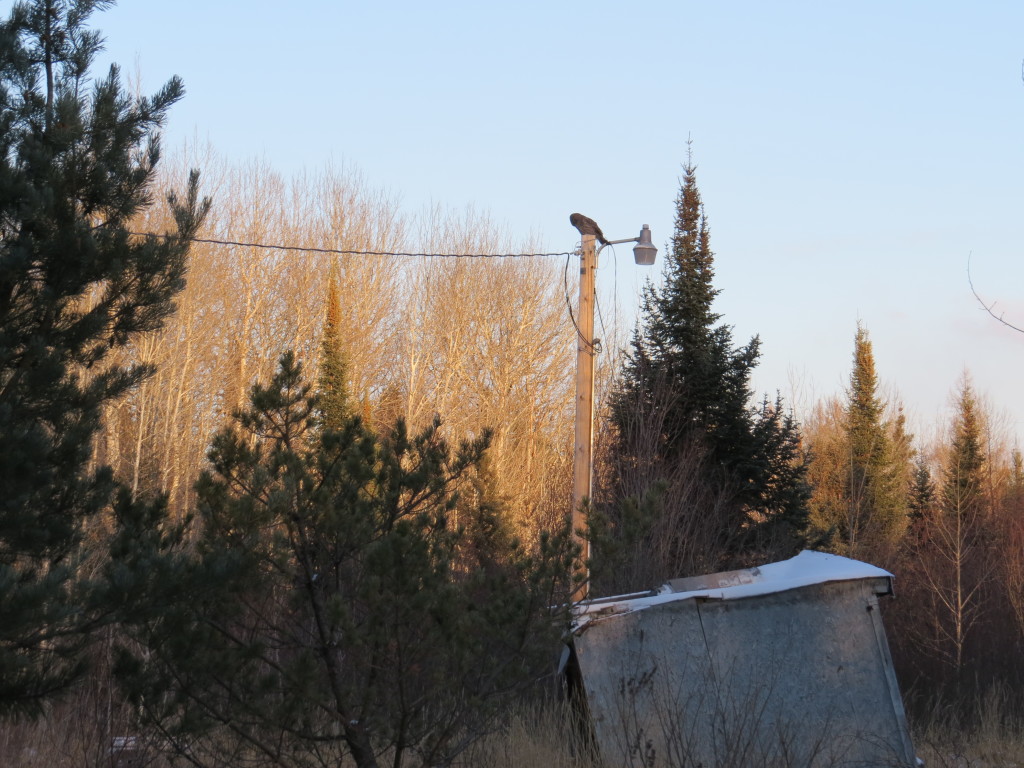 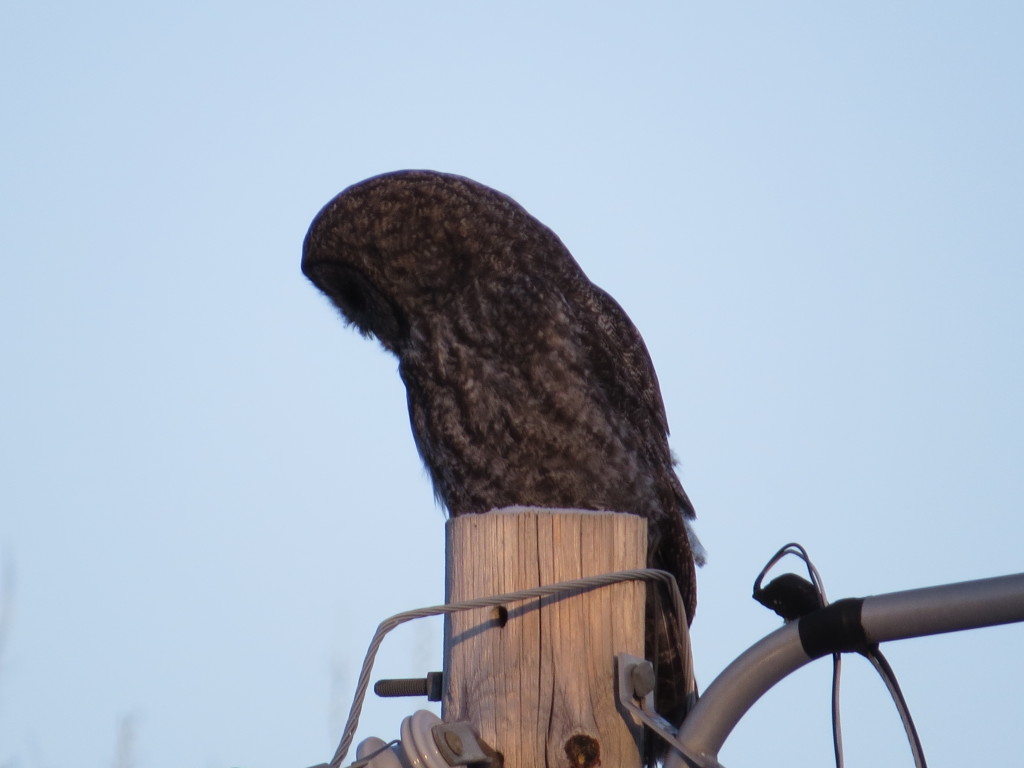 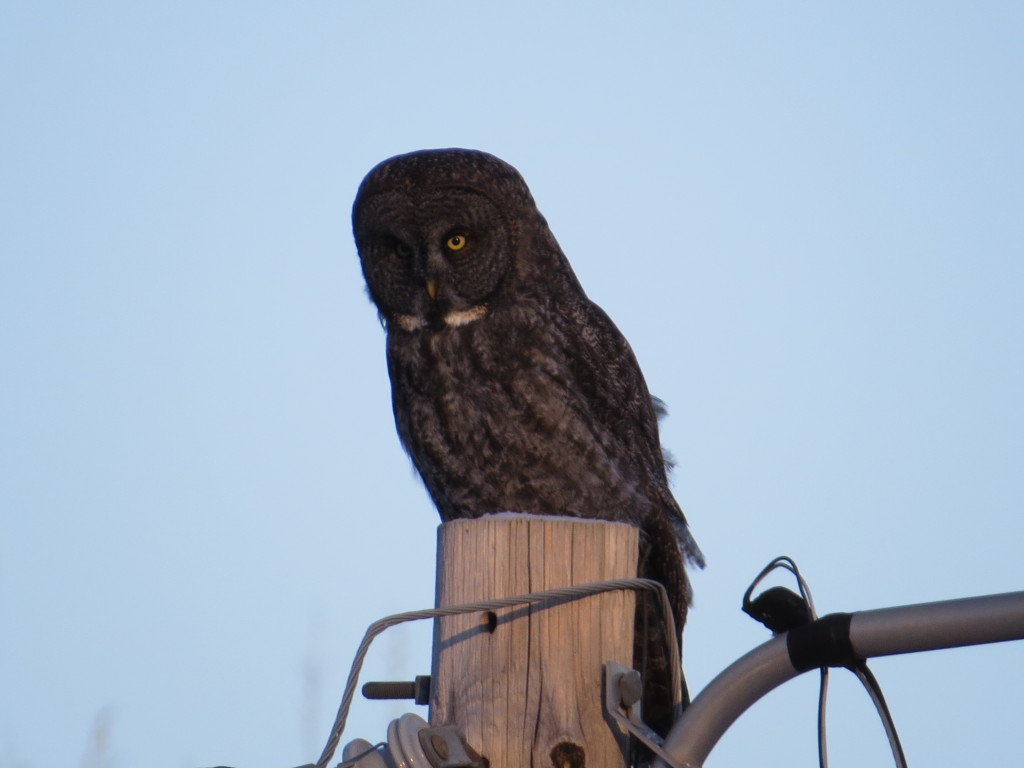 I never get tired of seeing Great Gray Owls.  They are incredibly cool and mysterious. Even Melissa was enthralled with this bird.  We continued to enjoy it until it eventually went out of sight. 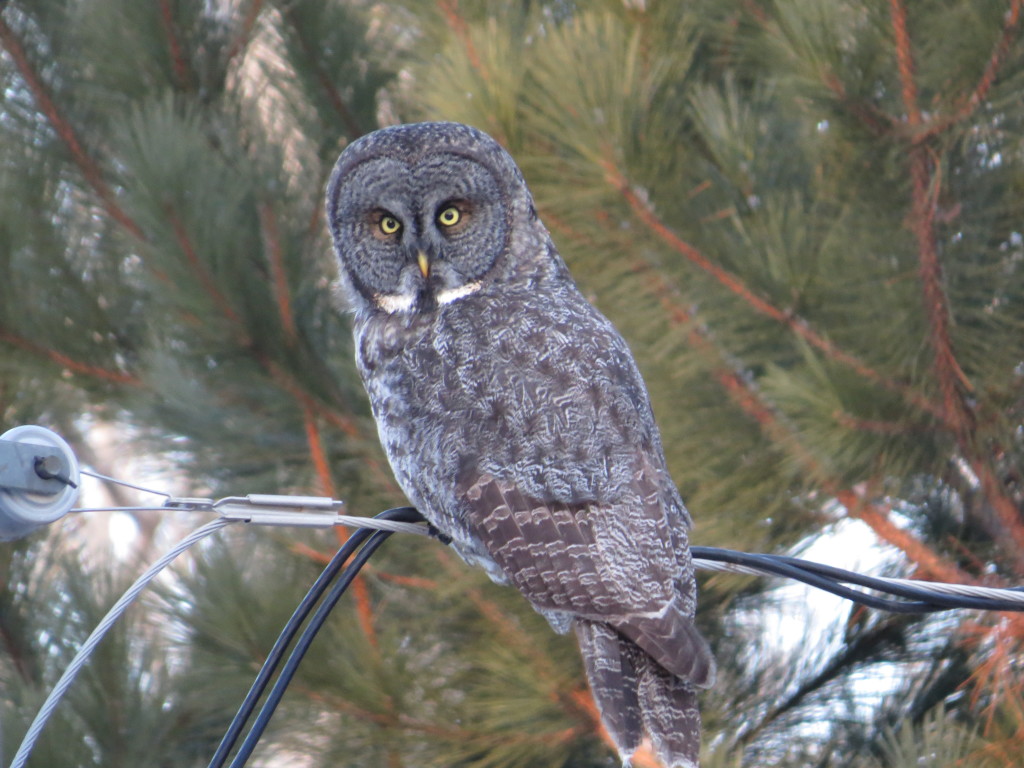 Two Great Grays, I couldn’t believe it.  That’s the best I’ve done in the Bog.  Nevertheless, they are addicting and we couldn’t stop, especially since some birders had seen 4 or 5 the day before. We had just enough time to check one more road.  We drove down the road fast so that we could turn around and have the quickly setting sun at our backs.  This time we drove slow.  COS was straining to look ahead.  I think she was hooked on the thrill of the hunt.  And then COS did it again as she pointed straight-ahead and said, “Josh!”  Do you see what COS saw? 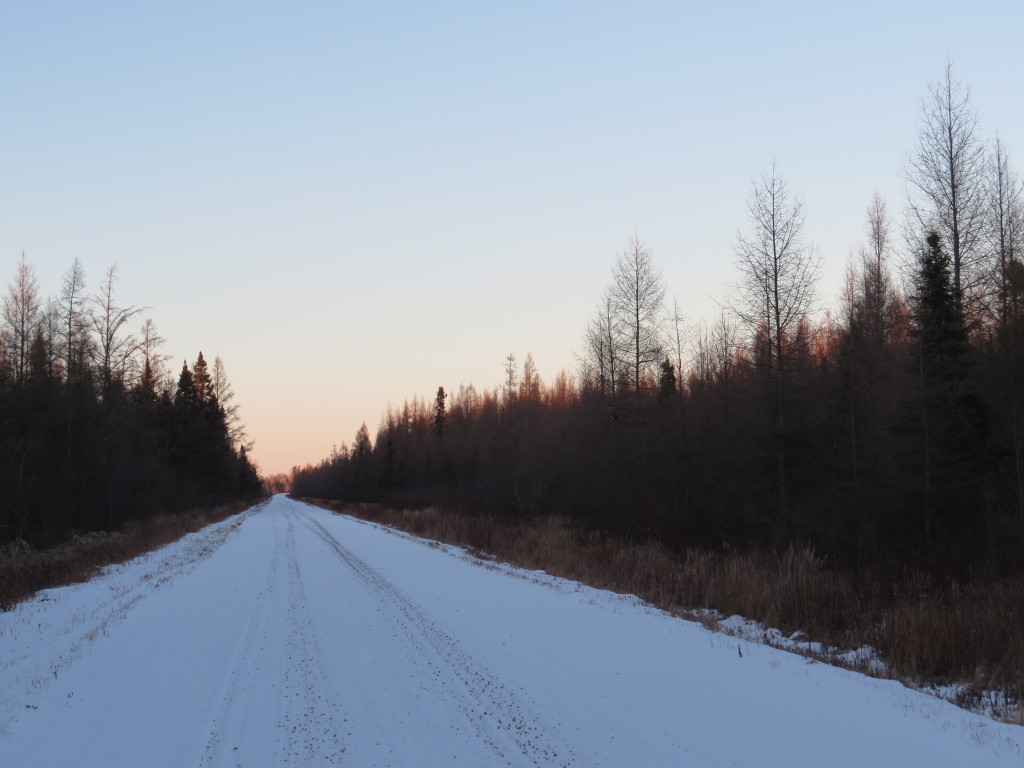 These things blend in like you wouldn’t believe, something that COS said was amazing considering how big they are.  And this one was big, really big. 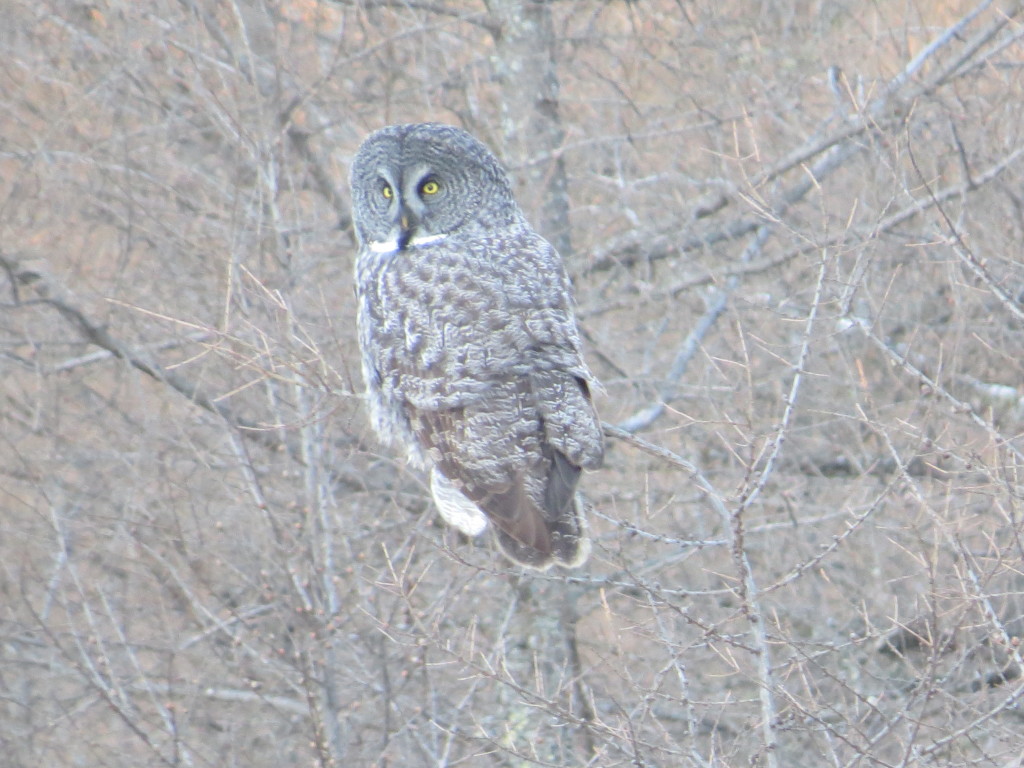 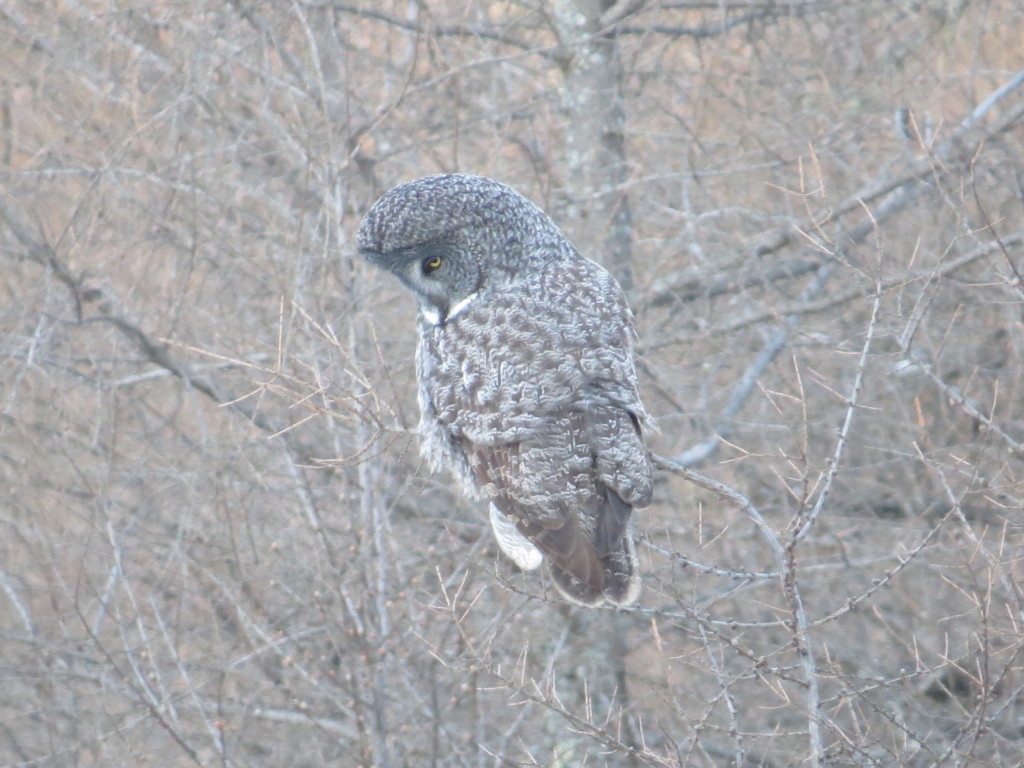 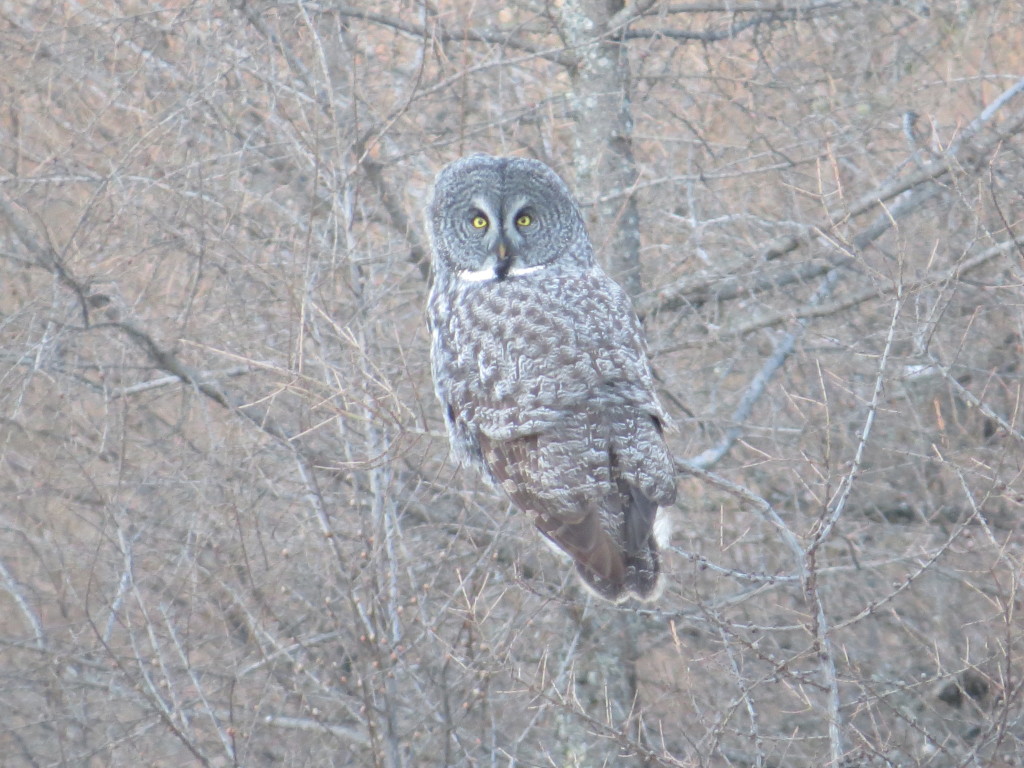 It’s always awesome to see a single Great Gray, but seeing three of them was tops. Five Great Grays in Aitkin, eight Burrowing Owls in Arizona, and now three Great Grays in the Sax-Zim Bog – this family has had some incredible owl-prowls together.

I’d like to leave you with a short clip of this Great Gray.  In the future I hope to do more video of this species because they are fascinating to watch.