Being in northern Minnesota puts one in striking distance of multiple great birding opportunities.  And in the case of this birder, it also puts him in close proximity of many relatives.  Therefore the decisions must be weighed carefully; there is no room for making a foolish birding decision with a limited amount of time to bird.  The Sax-Zim Bog venture was savvy and efficient as it was en route to our destination.  With some successful owling in the Bog, I didn’t feel the need to go back.  Instead, there were two other options that were now vying heavily for my attention: go to the Isabella area in Lake County after reports of gobs of Spruce Grouse, Black-backed Woodpeckers, Northern Hawk Owls, and Boreal Chickadees or go back to Duluth to try to see Minnesota’s 10th only Golden-crowned Sparrow.  Time and distance would not allow me to do both.  The boreal birds were really appealing to me, but I instead made the more logical, albeit less fascinating, decision to go after the sparrow.  The boreal birds will always be boreal, but the Golden-crowned Sparrow will not.  Also, being up north only put me 1.5 hours away from Duluth instead of the normal 3.5 hours away.  It was the right thing to do.

One of my benchmarks for deciding to chase a rarity is whether or not Randy chases.  If he’s never seen it, then it’s an incredible bird.  2014 has been unbelievable as Randy has added seven state birds when he normally gets one maybe every couple years.  The Golden-crowned Sparrow was one such bird.  Being on opposite ends of the state did not allow us to chase together, but that didn’t stop us from joining forces at dawn last Saturday in Duluth.  I was glad to not be going about this alone as this Sparrow had been showing up sporadically at Jeff Newman’s feeders on Regent Street.  Some birders had been traipsing all over alleys and surrounding blocks in their efforts to locate the Golden-crowned.  That seemed like a daunting proposition.

So the plan was to be at the house at first light to hopefully see the Sparrow grab its first meal for the day.  As we stood on the sidewalk (birders were not to go on the lawn) in the pre-dawn of a cloudy day looking to the feeders in the backyard, we could barely make out the silhouette of the first bird to land on the ground.  Just as it did, the homeowner, Jeff, came out his door to announce the identification he made from his much closer view from inside the house.

“White-throated Sparrow!”  Back inside he went.

That silhouette flew and was replaced by another.

“Golden-crowned Sparrow!” Jeff proclaimed as he came out his front door for the second time in as many minutes.  With the shared lifer now under our belts, Randy and I were no longer waiting on the bird but on the sun for some better looks at what we traveled so far to see.  Here is one of those sketchy first looks in the dim morning light. 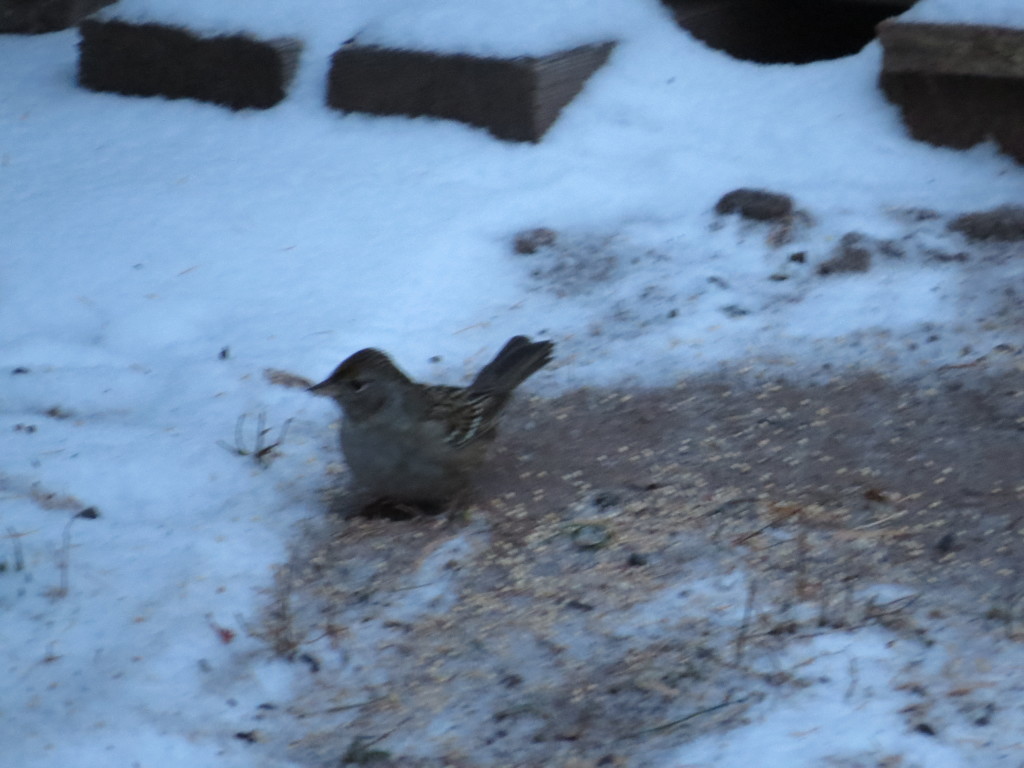 Just as other birders had said, the Sparrow did not spend much time feeding.  Instead, it hung out in two cedar trees near the feeders.  Now the sun and the branches were conspiring against us. 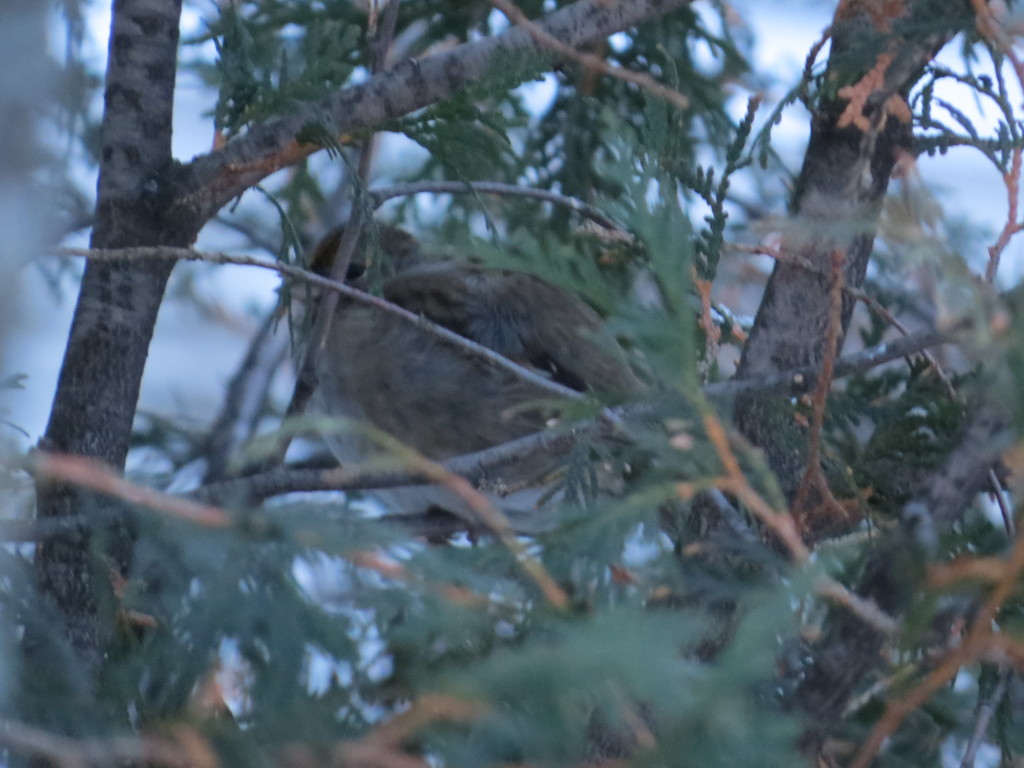 But eventually things started looking up as the morning progressed and the bird came out into the open for brief spurts. 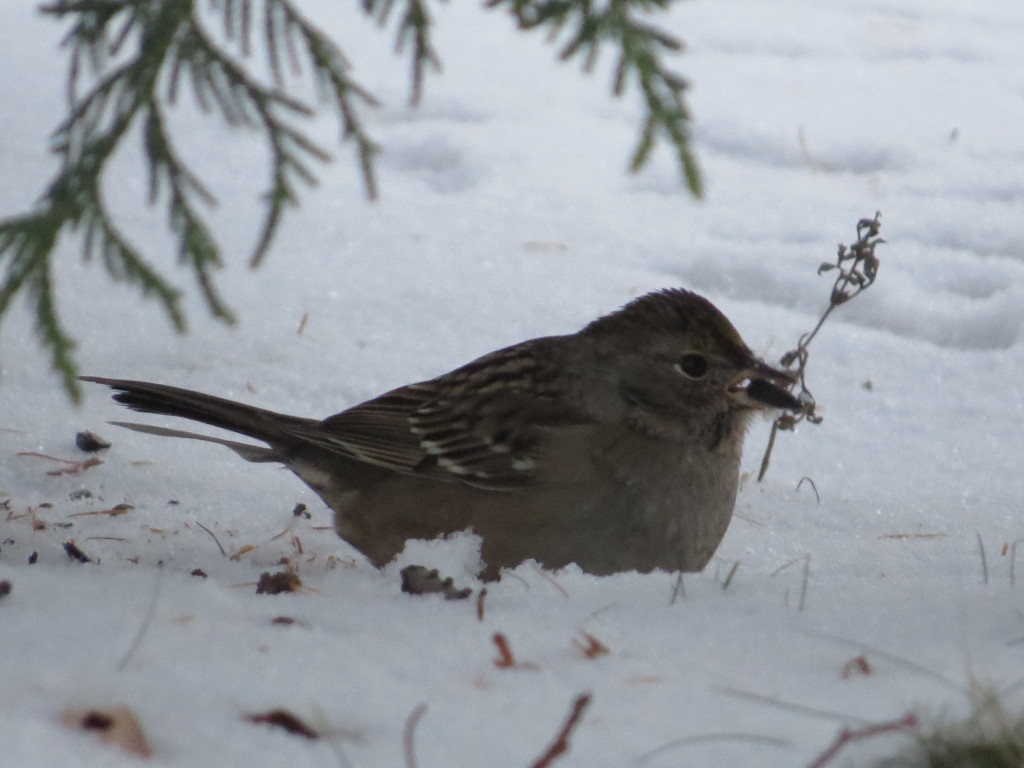 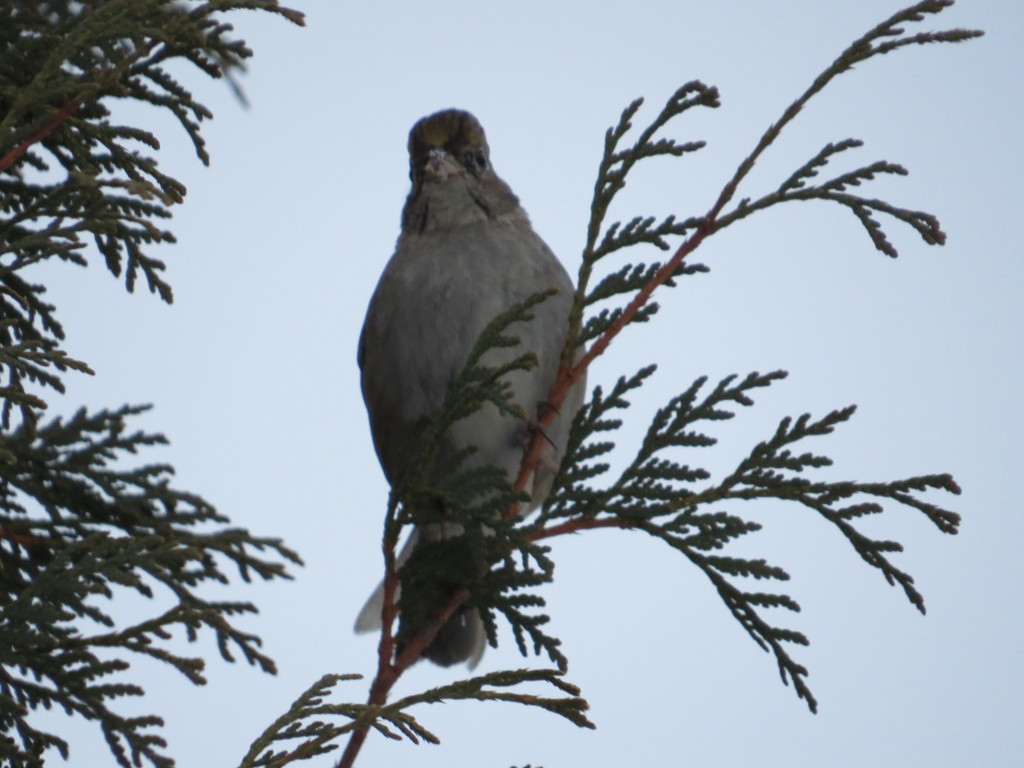 Then, finally, after an hour there was decent light and a perfectly-perched bird. 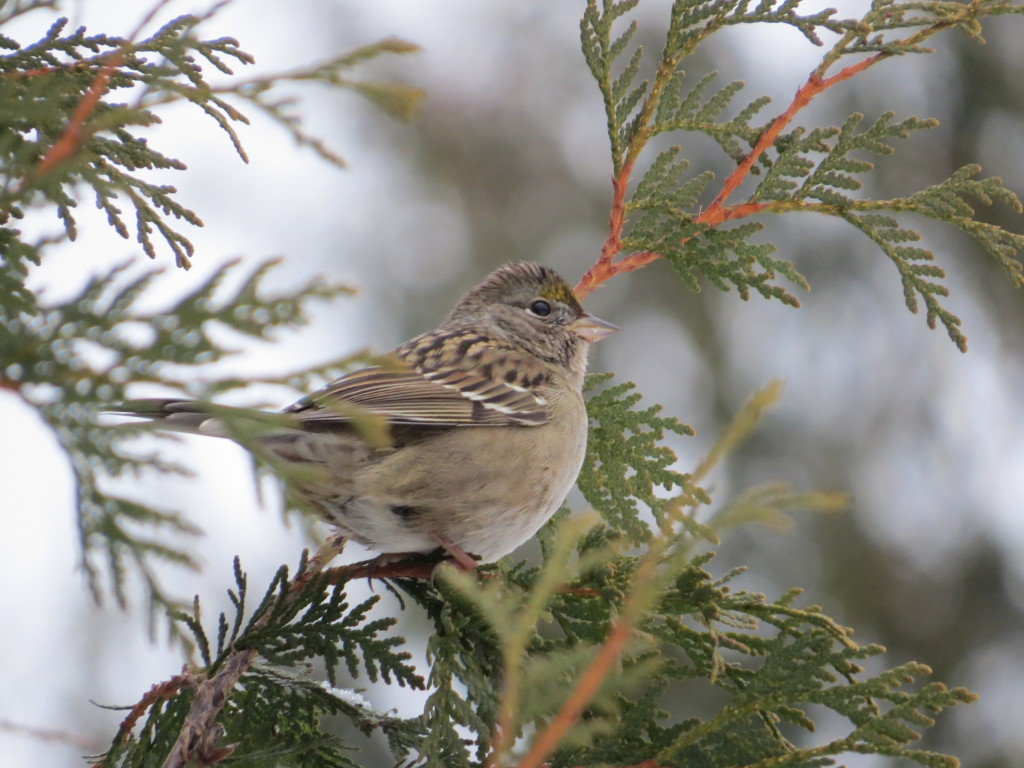 With a lifer and an okay photo, it was time to move on with the day.  Randy and I split.  He went for that Common Eider while I contemplated my next move.  It was now 8:00, and I didn’t have to be anywhere until 2:00.  I was tempted to go to Isabella, but the distance and my lack of experience in that area caused me to decide against it.  Instead I opted to hang out in the Sax-Zim Bog for a few hours which was on my way home. My next post will detail some of the random good birds I found in the Bog and in other parts of the Iron Range.

4 thoughts on “A Golden Opportunity for Sparrowing”