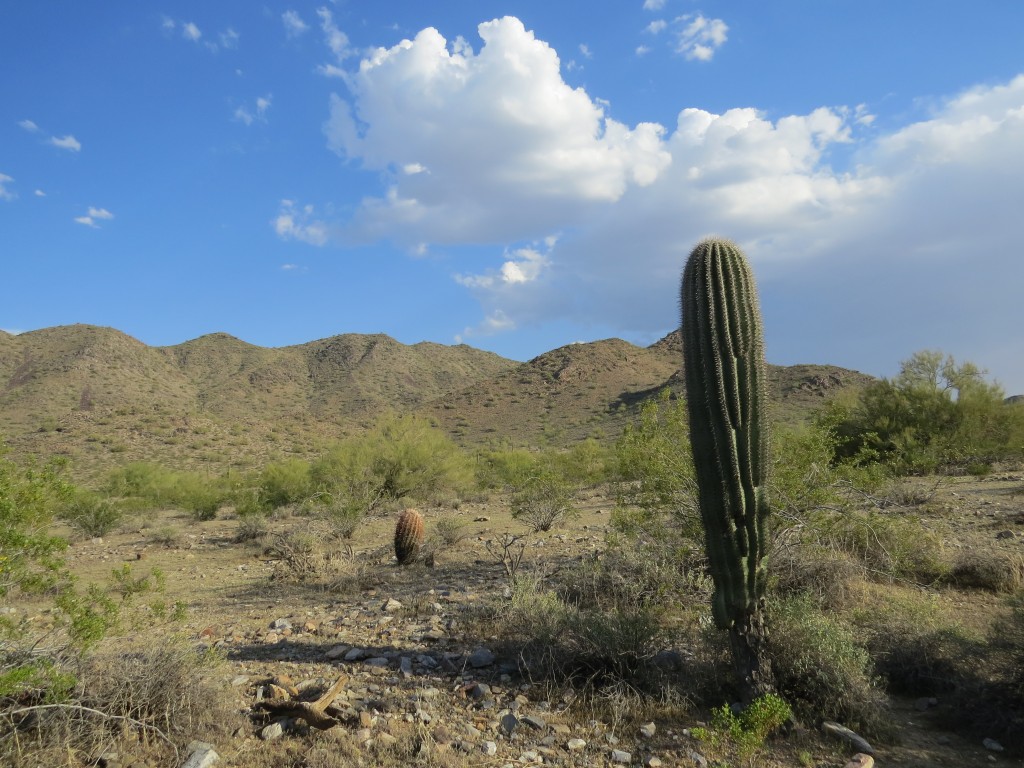 Every now and then my virtual birding world intersects with our actual birding activities. More than once I have found myself in the company of another birder trying to see a rare bird only to find out that person is some birding legend whose reports I have read. The Arizona trip would be put us in the company of just such a birder – but not by chance.  Through my venture with Birding Across America, I have met many great birders who have contributed pictures and blog posts to my site.  One regular contributor who graciously shares his phenomenal photos of those amazing Arizona avian creatures is Laurence Butler.  Reading Laurence’s blog quickly shows that this guy can get the birds. When we planned our trip, I reached out to Laurence asking for tips on locations for target birds.  Not only did he provide such information, but he even asked if we would be interested in going out birding together. Umm, yes please.

Prior to the trip, Laurence and I had settled on birding the Phoenix Mountain Preserve – a large park in Phoenix where the Sonoran Desert is allowed to run wild.  I couldn’t wait.  Our trip thus far had failed to produce those classic, deserty birds. This would be the chance. Laurence promised us our fill of the desert classics and even mentioned we’d have a shot at seeing a Long-eared Owl.  I took the former with a grain of salt because I know what a tough species that owl is to find, even in Minnesota.  The truth is, I didn’t care what we would find because I knew it would all be new.

Last Tuesday my dad, Evan, and I were headed to the preserve to meet Laurence after his work day.  Being out-of-towners we were unfamiliar with how long it took to get to the preserve, so we were running late.  It didn’t matter – Laurence was already at work finding feathered treasures for us.  He called me saying he had a Harris’s Hawk pinned down in a tree along the street leading to the parking area.  This guy didn’t waste any time.  Our first in-person meeting was hastily executed in the middle of a street while dealing with the distractions of getting a view of the life bird while not getting flattened by a motorist. 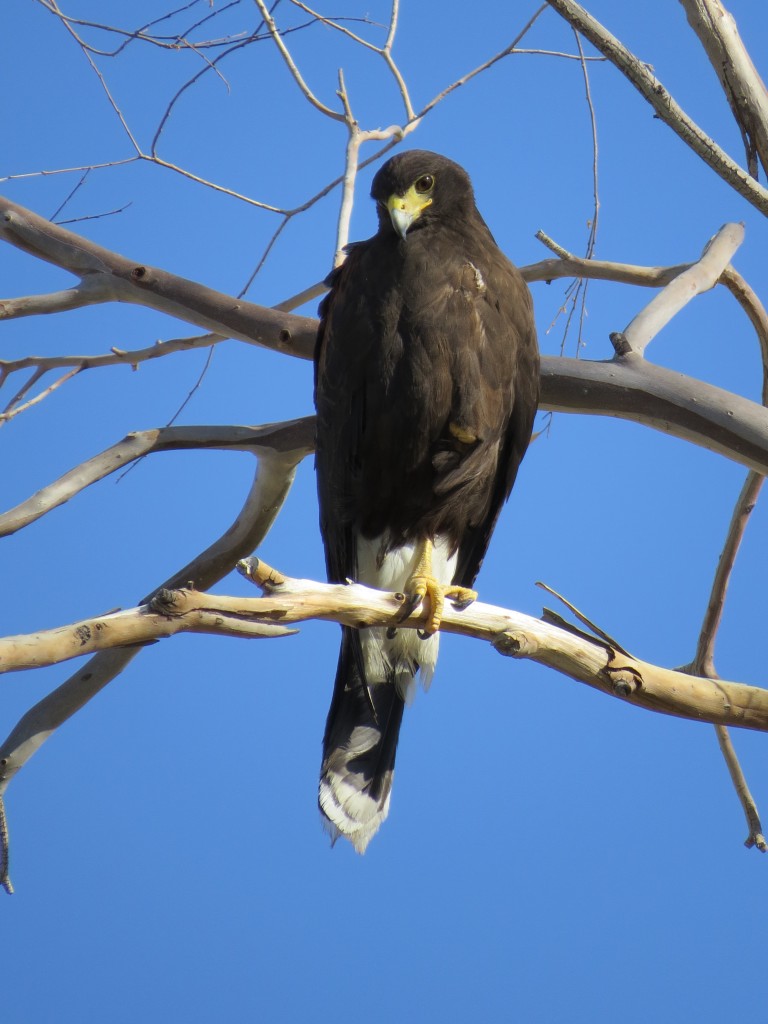 As we walked to get a closer and arguably safer view of the hawk, Laurence pointed out a female Costa’s Hummingbird lifer for us.  But after nabbing a couple shots of the hawk, we were back in the vehicles to drive the remaining few blocks to the preserve.  There were a lot more birds to find and no time to lose.  In fact, on that short drive Laurence stuck an arm out the window of his car pointing out yet another lifer for us – the Curve-billed Thrasher. 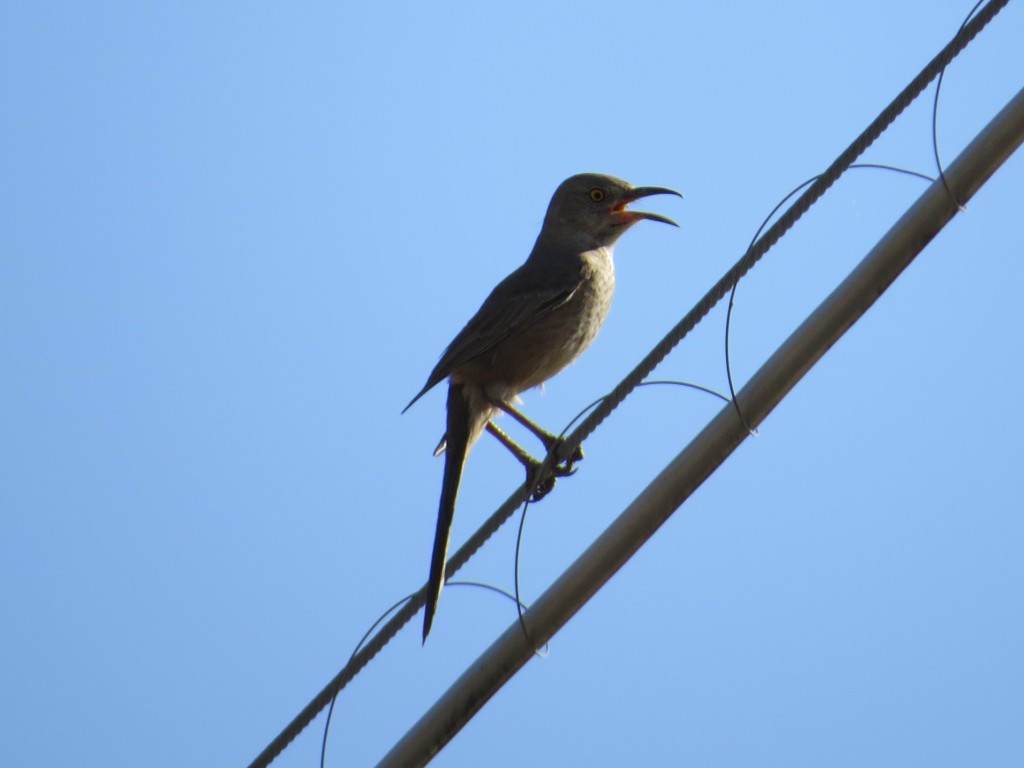 Once we got to the preserve’s parking lot, the towering Butler led us on the rocky path into a bustling desert full of human and bird activity – mountain bikers, hikers, runners, and birds were everywhere.  I don’t think we knew which way to look or what to listen to first.  Never mind that we were somewhat preoccupied that we might step on a rattlesnake, get sunburned in the 80+ degree sunshine, or trip onto any of Arizona’s inhospitable plants.  Finally my attention settled on something familiar – a Gambel’s Quail that was just sluggishly lounging on a branch.  Mostly these birds seem so high-strung and dart away, but it’s almost as this one looked at us and said, “Meh.” 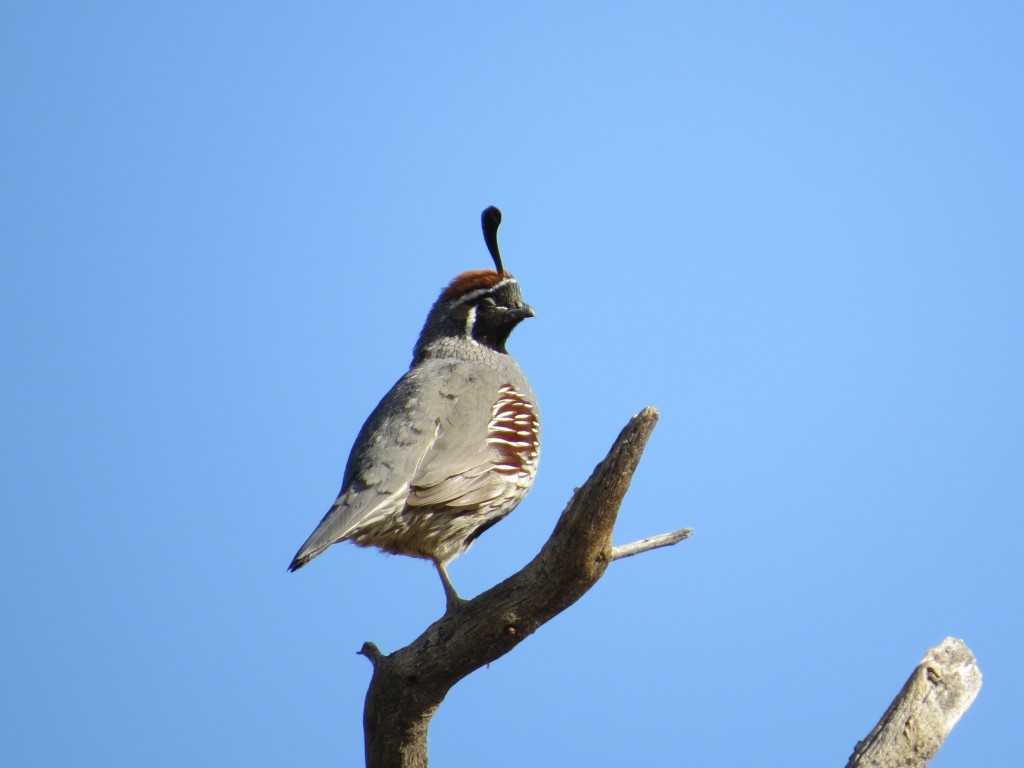 He was no lifer, but it took only seconds for the first of a long-procession of lifers to make its appearance – the very handsome Black-throated Sparrow.  I think this is the king of all the sparrows.  It almost belies its namesake since it’s not just some drab, brown, well, sparrow. 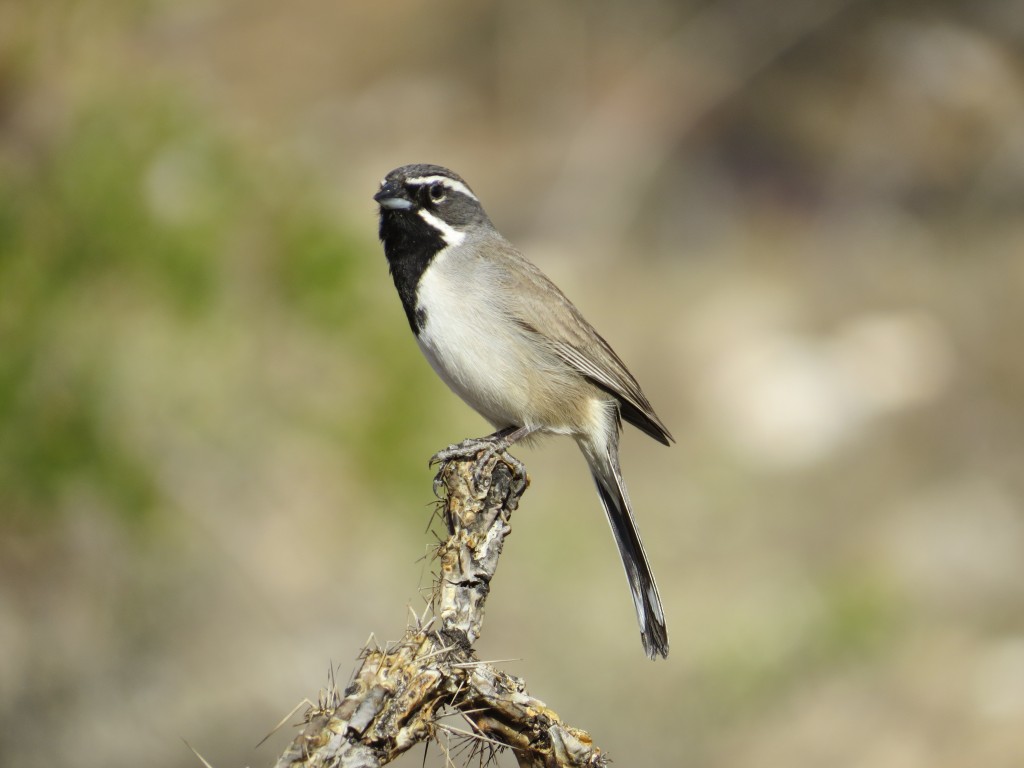 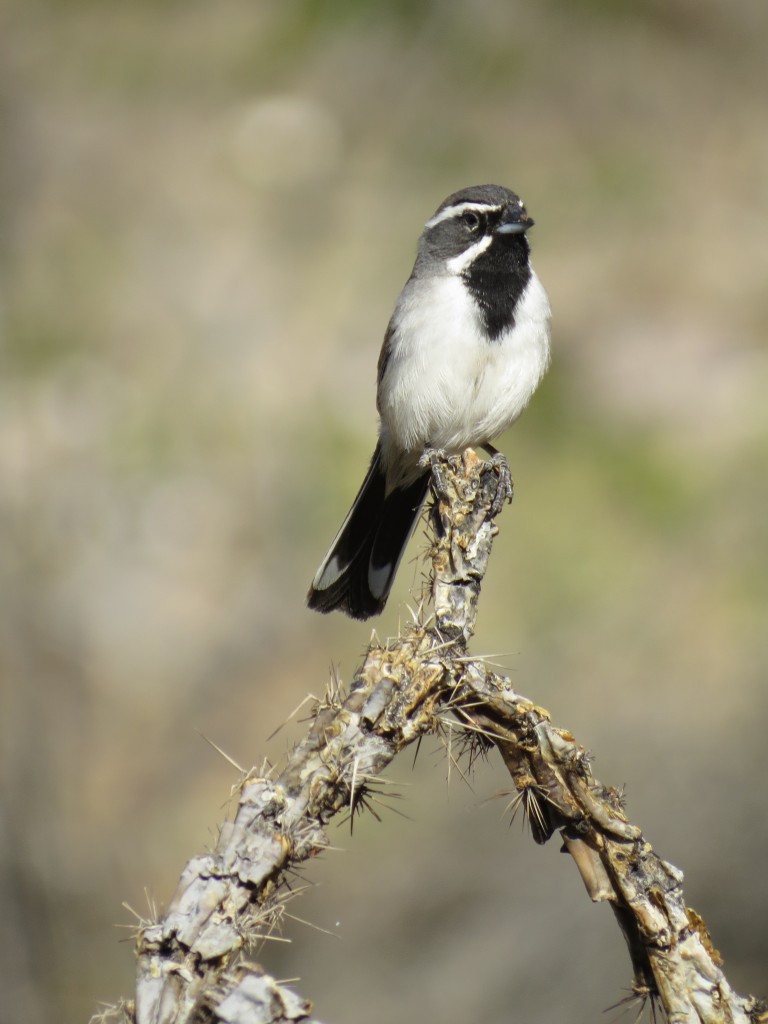 This was a cool sighting.  It’s a bird I easily overlooked in the field guides.  Only after seeing it come to life on Laurence’s blog did I realize that this was a bird I needed to see.

Not long after the sparrow, we got to see Arizona’s state bird – the loud and boisterous Cactus Wren. 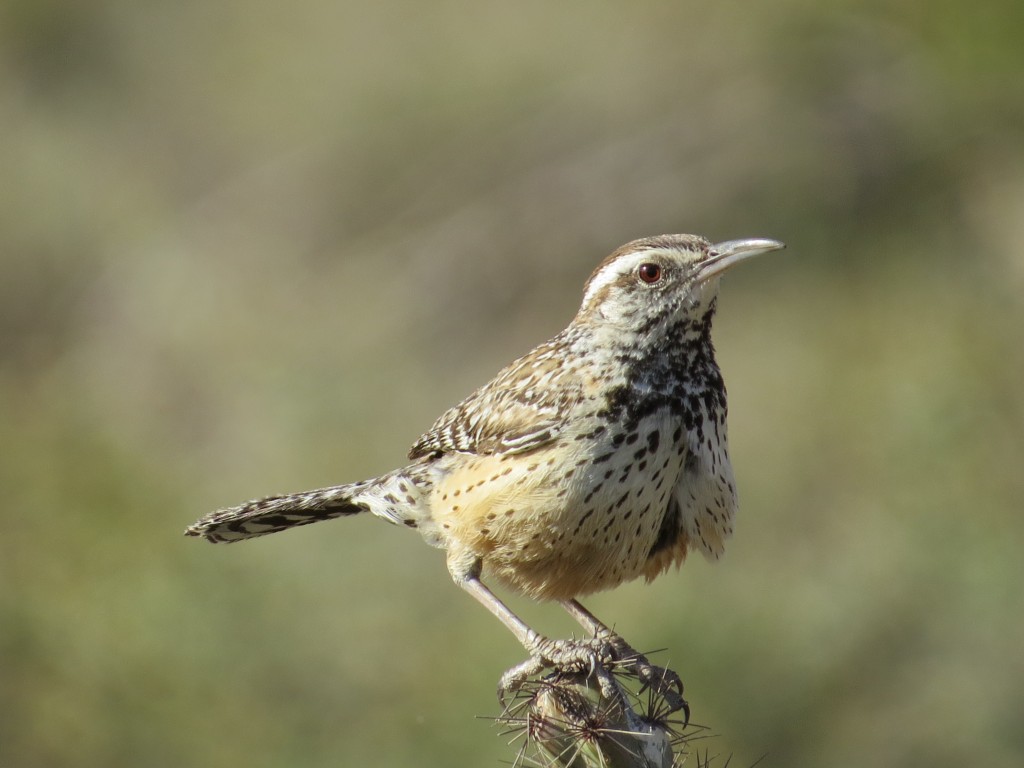 We got to see this bird a couple times.  It always obliged us by posing atop a cactus, even on top of the Saguaro Cactus, whose bloom is the Arizona state flower. 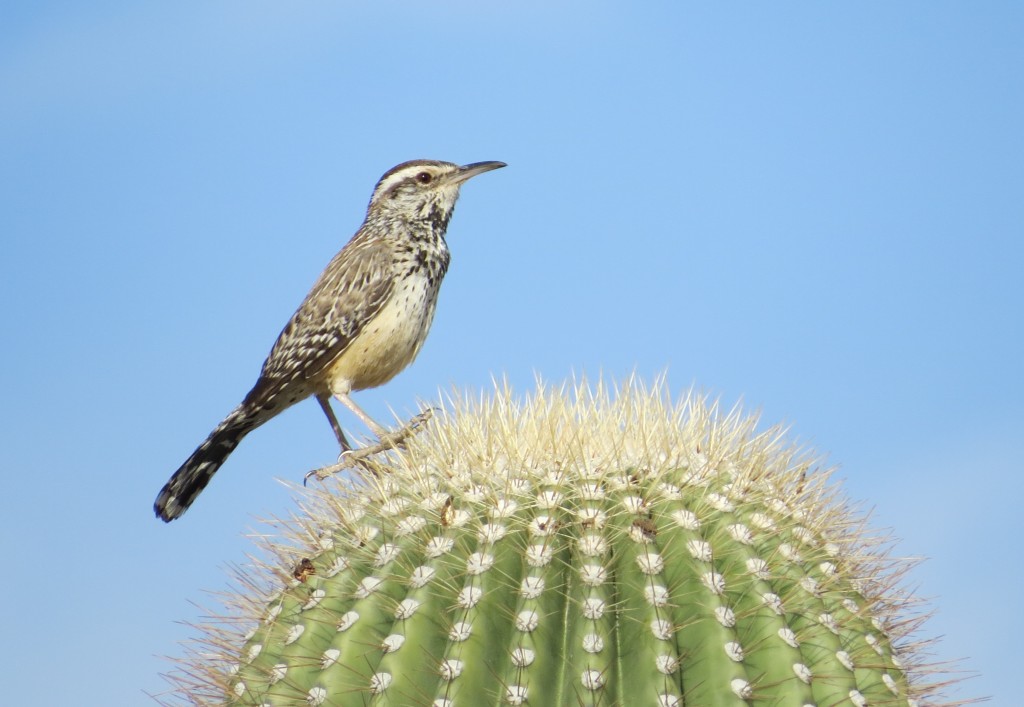 Birding with Butler is fast and intense.  Well, maybe that’s because us short-legged northerners, one of whom was 69 and the other 7, weren’t used to the fast and furious birding and walking.  And Evan was busy cataloguing every bird and plant species we saw in his notebook, an excruciatingly slow but cute task. With Laurence leading the way when we went off the path, I followed close behind, and Evan and Dad picked up the rear.  Our movements probably resembled those of an inch-worm, where the head quickly goes out, waits, and lets the tail catch up.  On such occasions I got a chance to enjoy the scenery. 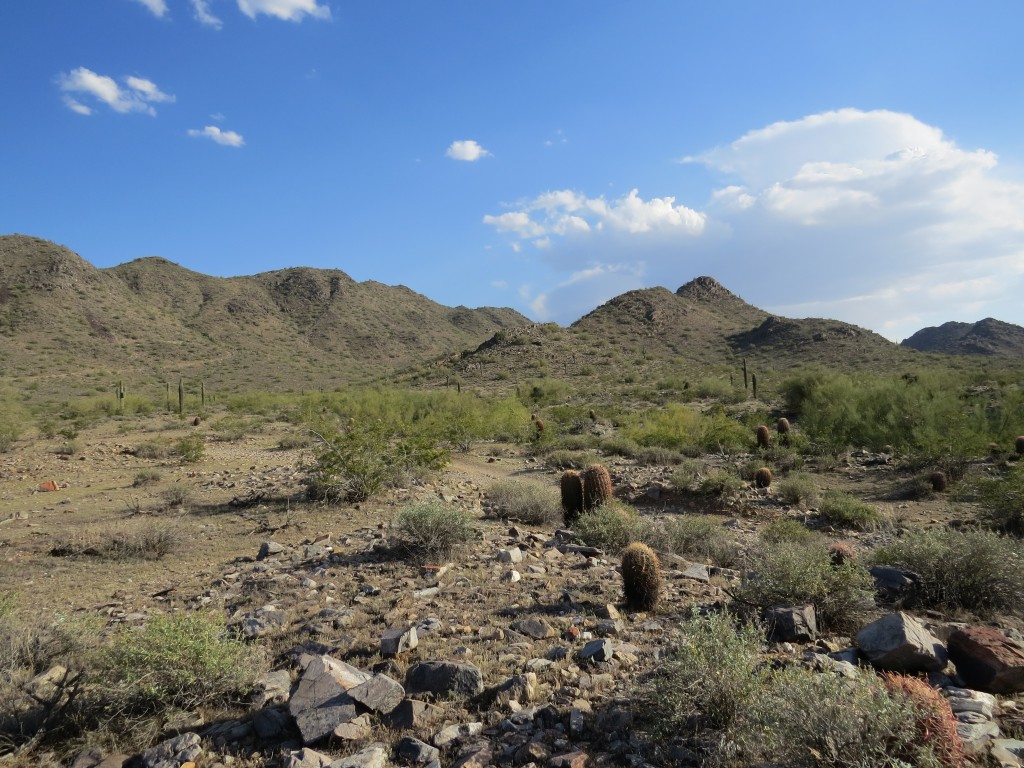 Going off-roading as we did, we Minnesotans were probably watching the ground more than the birds.  Our scout alerted us whenever something cool was around, like a running Greater Roadrunner with a lizard dangling from its beak.  But we were too slow and too dull eyed to see what Laurence saw.  Bummer.  But we did see this male Phainopepla that Laurence pointed out.  It probably helped that it was black and didn’t move. 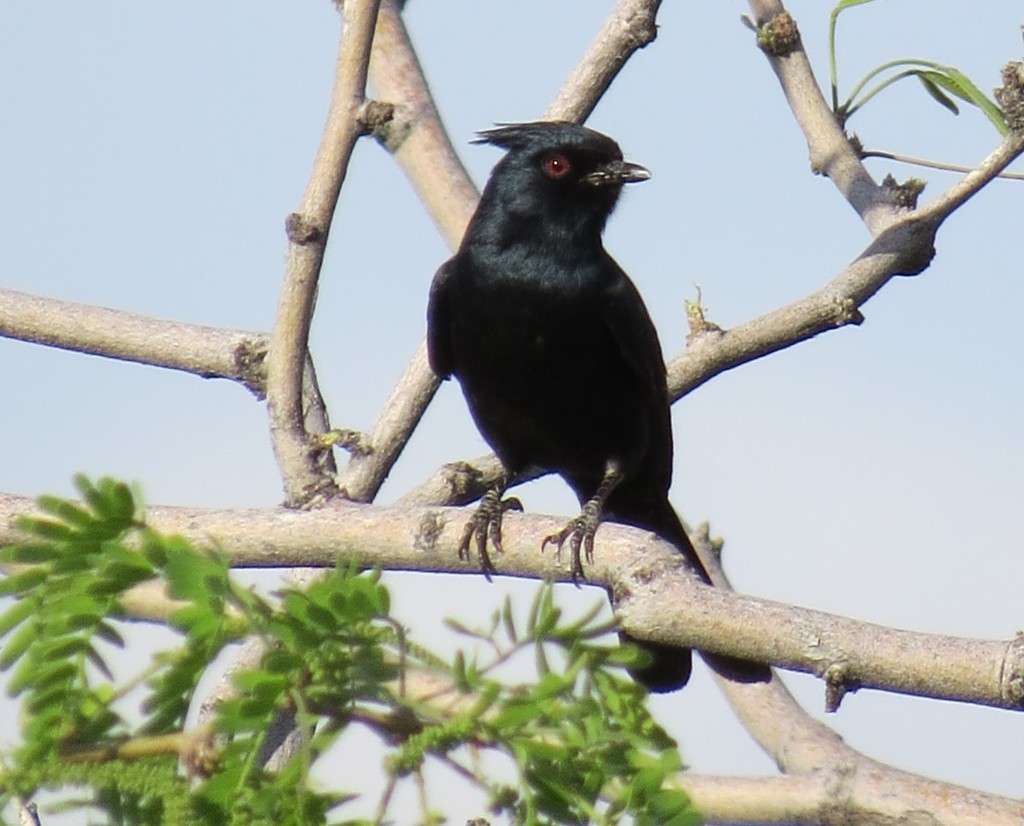 Laurence taught us that Phainopepla is a Greek word meaning “silky robe.”  I’m pretty sure Evan wrote that down too. Like many of the other birds, this one was a great ambassador for this desert state as it posed nicely in front of a Saguaro. 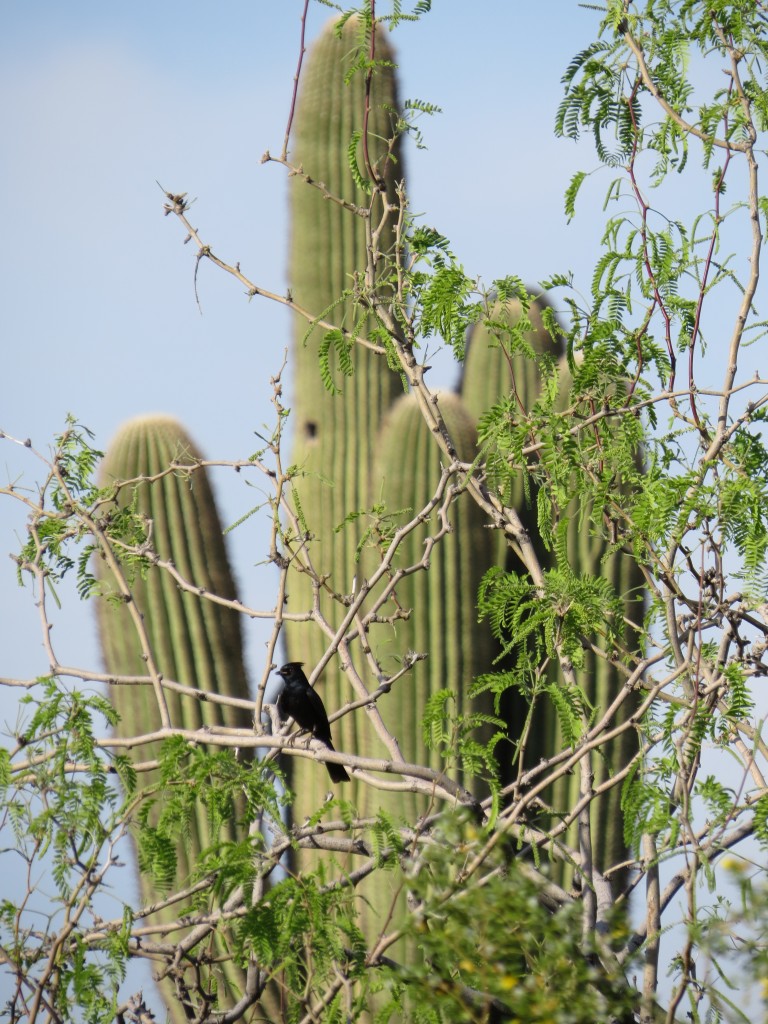 Our next life bird that we stumbled onto was the Black-tailed Gnatcatcher. 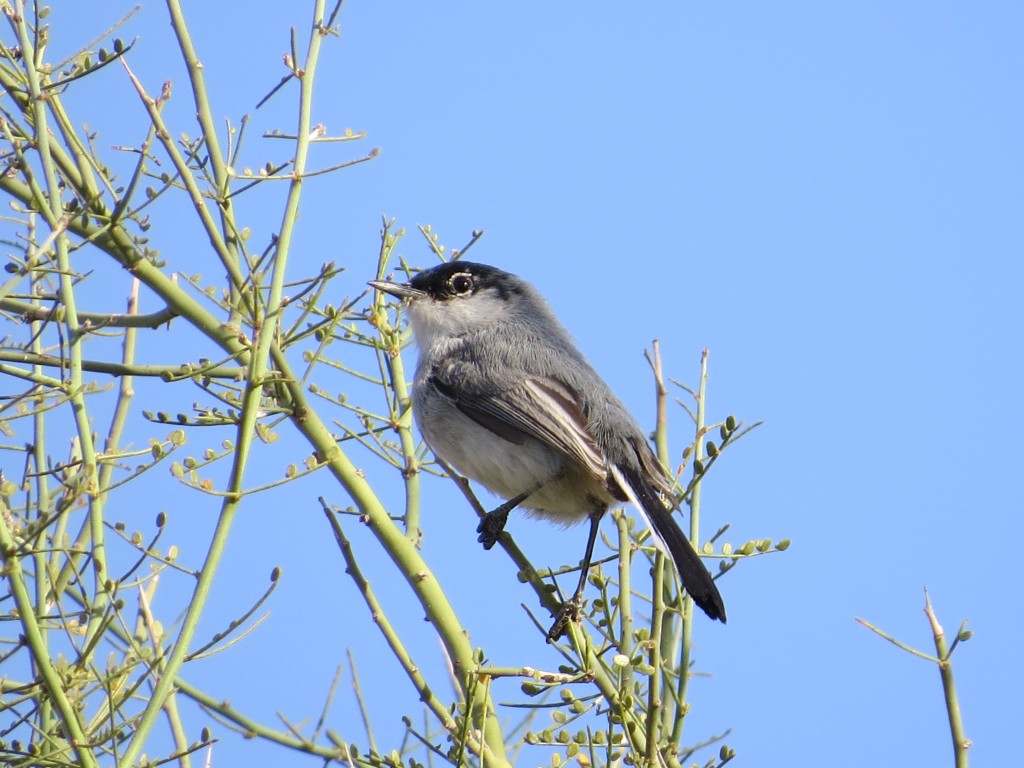 After viewing the gnatcatcher, we rested for a bit in the shade.  The heat was taking its toll on Evan. I took the opportunity to snap some photos of our surroundings. 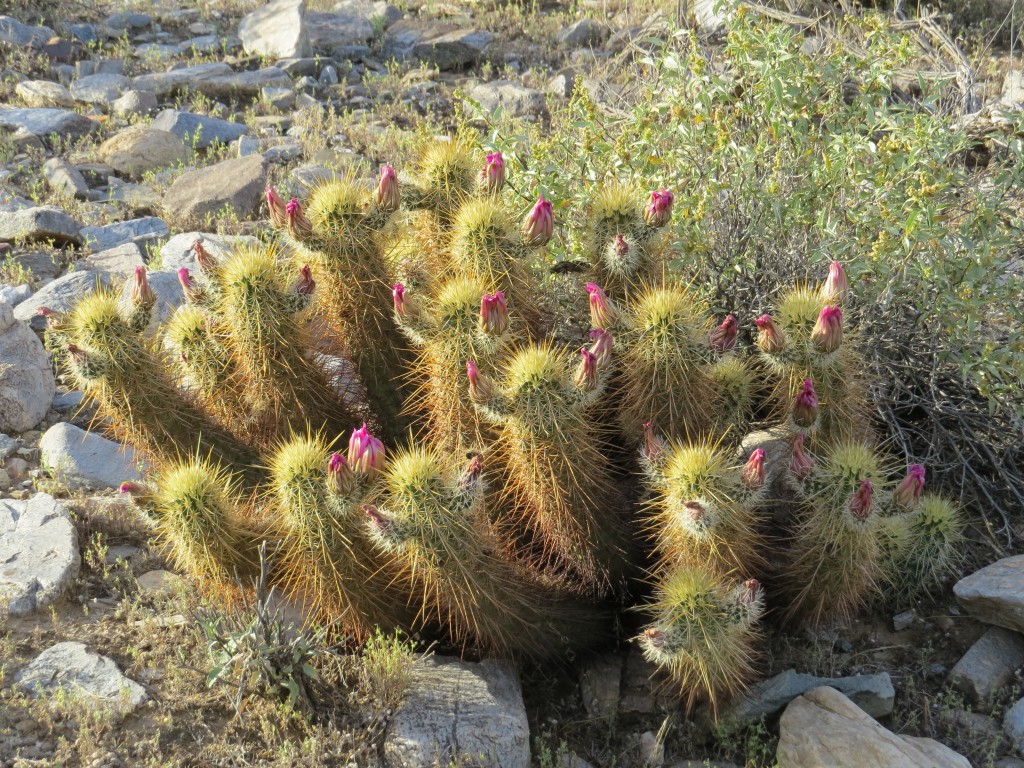 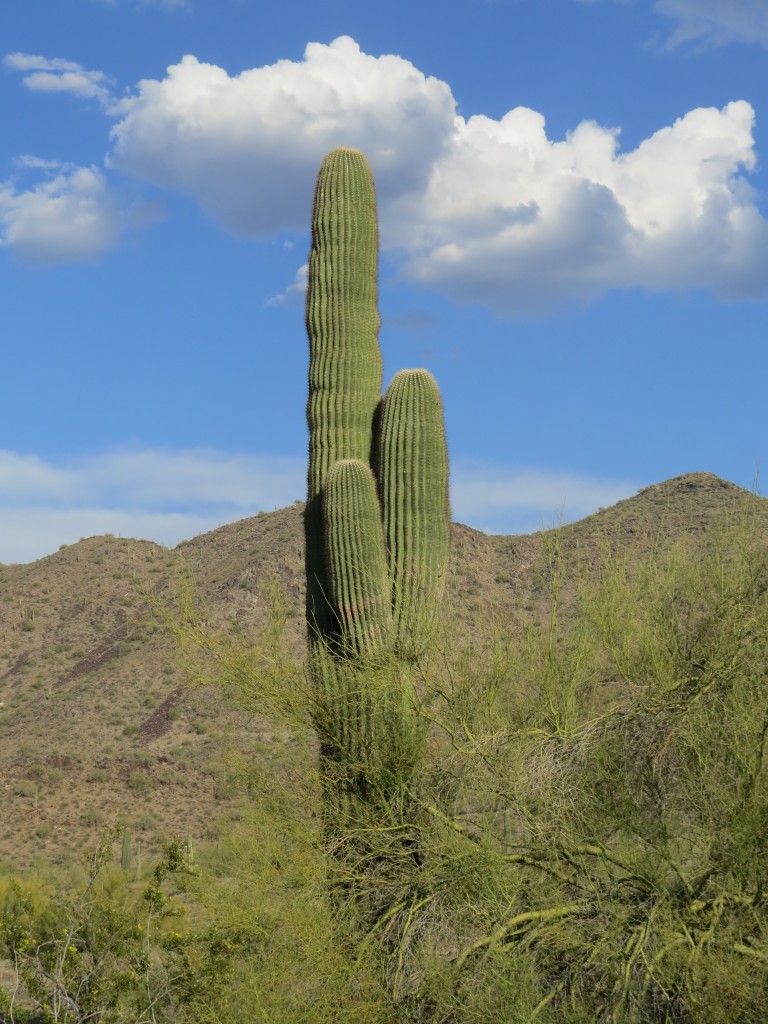 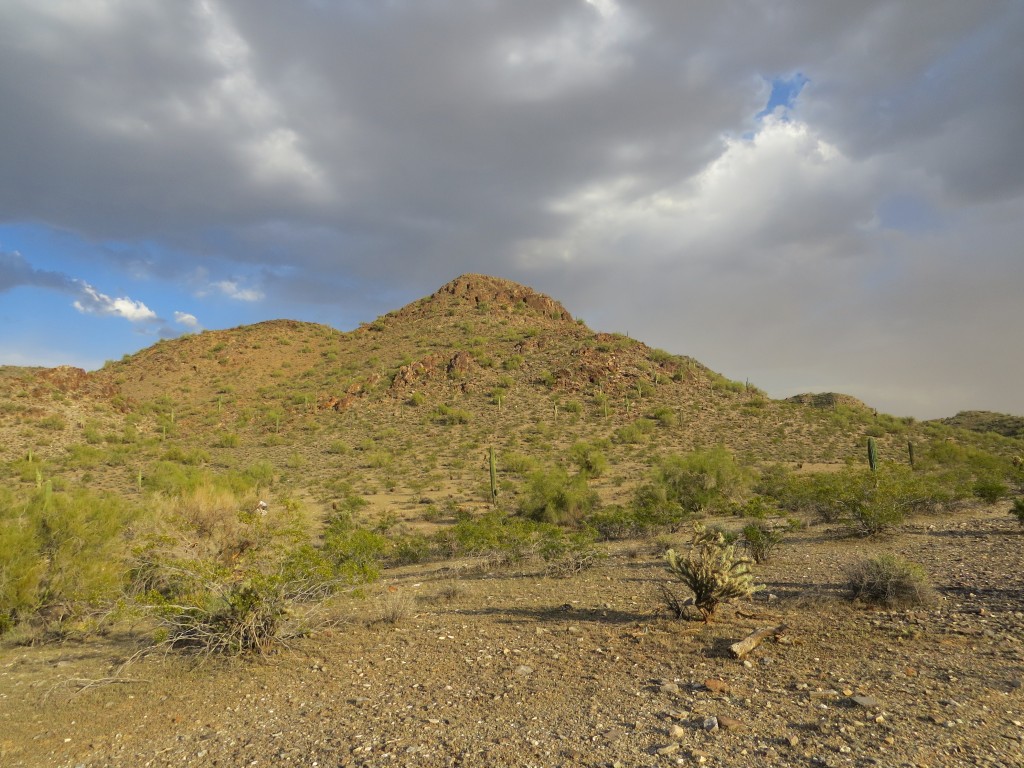 Our fearless guide kept watch for the next lifer. 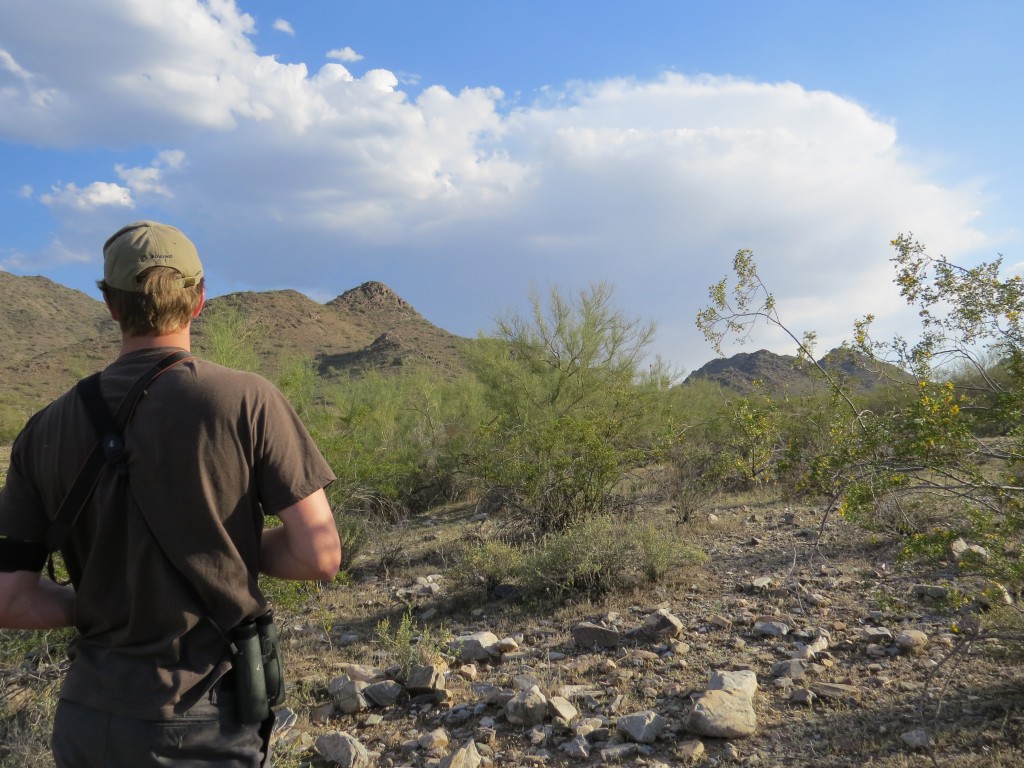 The next bird wasn’t a lifer nor a good photo op, but it’s a nice bird in my book, so it deserves a photo post – the Loggerhead Shrike. 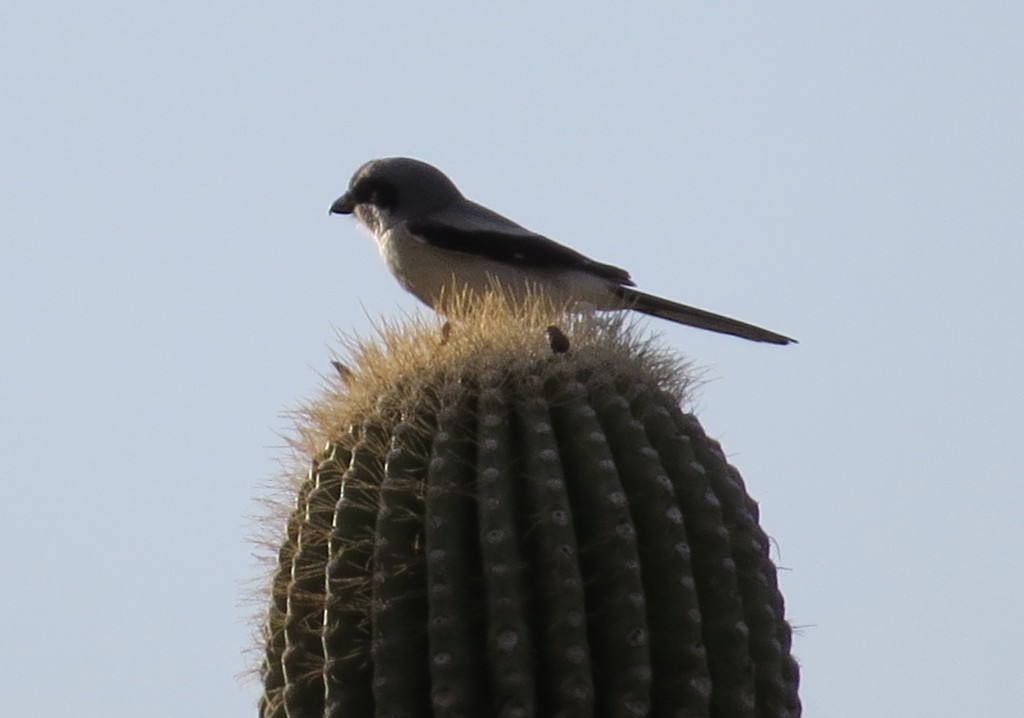 We did get another lifer but no decent photo when we found the Gilded Flicker.  We did, however, get some good looks at the Gila Woodpecker, which was a lifer for me the other day and a lifer for Evan on this day. 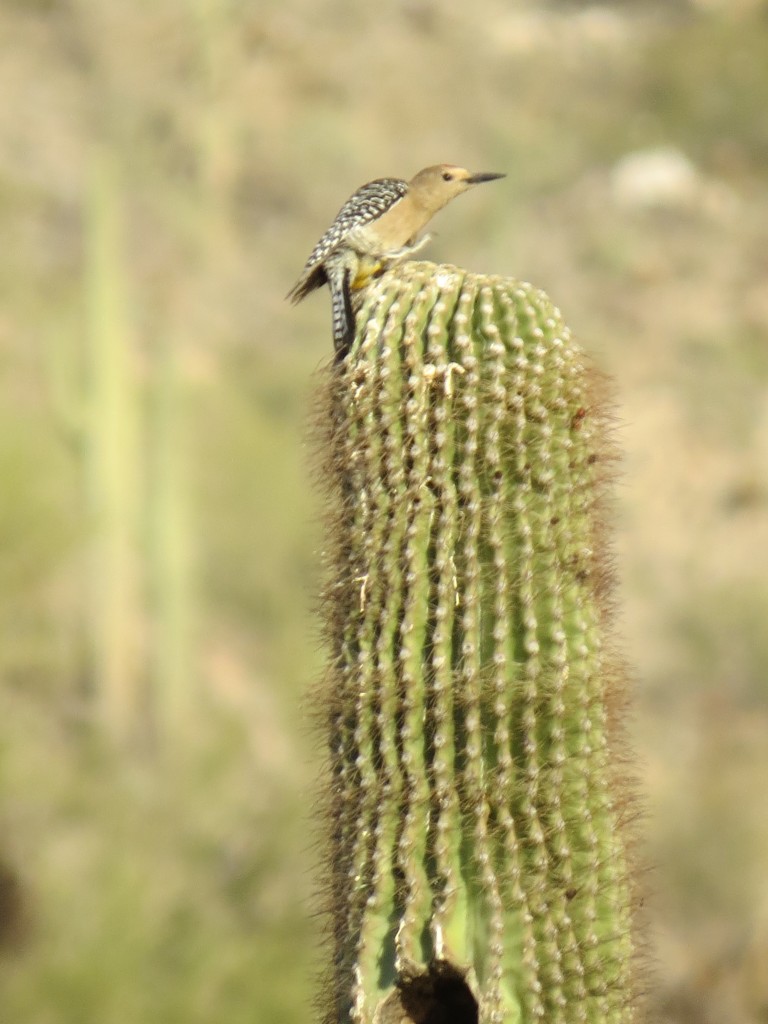 Laurence’s plan was to hike to the top of this mountain wash and then loop back by coming down a narrow gully that would take us most of the way back to the car. It was in this tree-choked gully where Laurence hoped we would see a roosting Long-eared Owl that only stops by this area during a two-week window during migration. Before we got to the gully, though, Evan and Dad had enough hiking and decided they would head back to the car and let the two of us carry on.  According to my dad, once they headed back to the van, Evan had a lot more pep in his step.  Where he was once dragging and complaining, he was now chipper and bounding through the desert toward the car.

It’s too bad they split off from us because we got to the gully not long afterward and embarked on a most memorable bird hunt. Laurence led our single-file procession down the rocky stream bed through the tangle of trees in the gully that was roughly 8-10 feet deep. When walking down the gully and looking ahead, it appeared that there was so much vegetation that we would not be able to proceed.  However, the rocky stream-bed was a perfectly cleared path the whole way down.

Laurence had said a birder he knows has come face-to-face with the Long-eareds in this very gully without flushing them.  The idea of coming upon this bird in such a manner was an exciting prospect, and one we took seriously by walking quietly.  But the more we walked, the more we dropped our vigilance. Hushed whispers of conversation morphed into decibel-levels that would rival bar-room talk.  Maybe we both thought the chance of seeing a Long-eared was a long shot, maybe we were relaxed after some already successful birding, or maybe we just wanted to yak about birds.  A covey of Gambel’s quail brought us to our senses if only for awhile.  But a short time later an explosion of wings barreled out of one of the trees.  I’ve flushed many a game bird in my hunting days, but none of them could compare to thrill of what we both instantly recognized as the very bird we were after, the Long-eared Owl!

The owl only went a short distance down the gully.  We knew exactly what tree it was in, but we could not see the doggone thing.  We carefully tiptoed and snuck our way to a better vantage point.  We strained to discern this owl from the tangled tree it was in.  No luck.  Eventually we made the owl nervous, and it flushed back upstream a short ways.  Not only were we fighting the owl’s uncanny ability to blend into anything, but it was also getting dark fast.  I used my camera to look into the general area it flew, and I could see his face and yellow eyes!  The next ten minutes or so, Laurence and I were crawling along the gully walls for a better vantage point to take photos.  The owl was found in the small, dark spot in the center of the picture below, right along the streambed just past the rocky outcropping on the left.  Laurence and I used the outcropping to crawl closer to the owl. 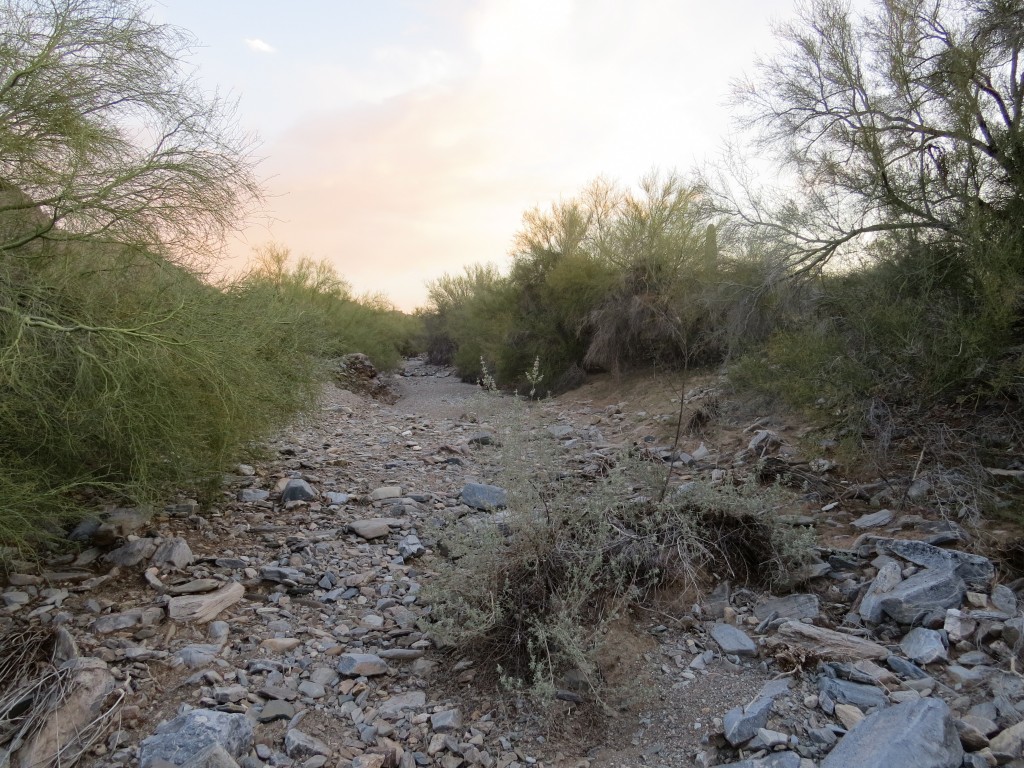 Of the many photos I took through the tangles in the low-light conditions, I managed to pull out one usable shot of this super-cool lifer. 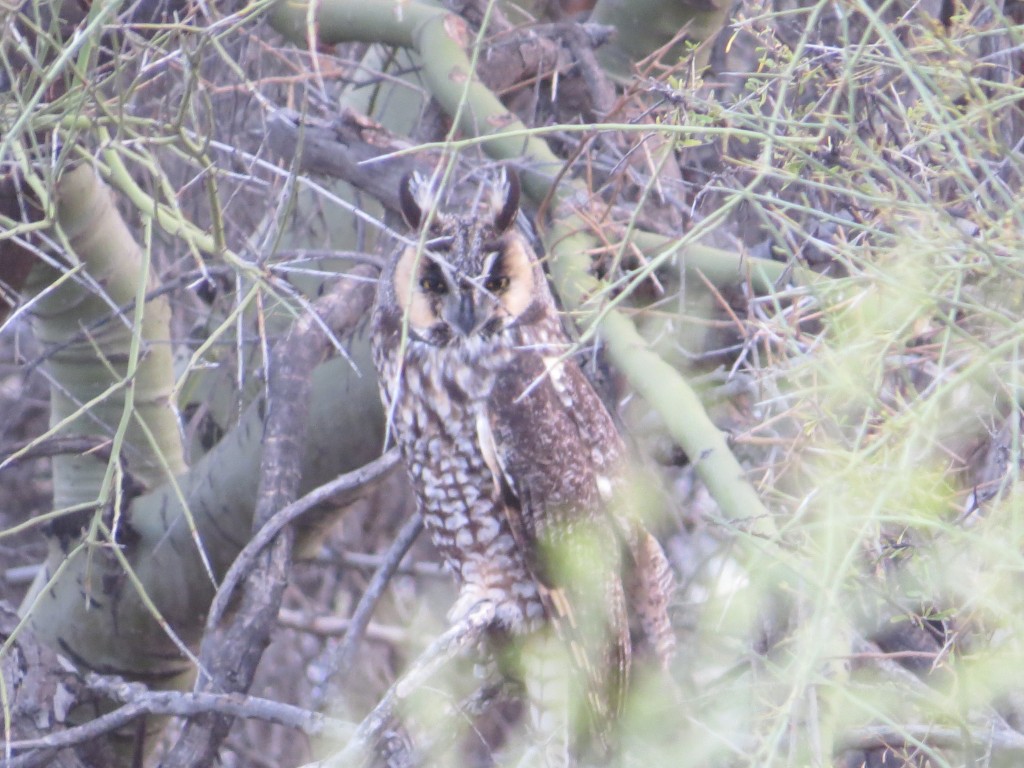 The owl tolerated us for a time but eventually got tired of us and flushed upstream again.  We decided it was time to let it be, so we made our way back to the parking lot.  It was a successful operation that went exactly according to Laurence’s plan.  I absolutely love when a plan like that comes together and an objective like that is achieved.  I think the feeling was mutual as we found ourselves celebrating the moment with a much-deserved high five.  The only thing better would have been if Evan and Dad could have seen it too.

The only thing left to do after leaving the owl was to enjoy the desert in the setting sun and freely talk about birds, birders, and birding at bar-room decibel levels again.  I got to enjoy my last looks at desert birds and picked up final lifer for the day – the Abert’s Towhee. 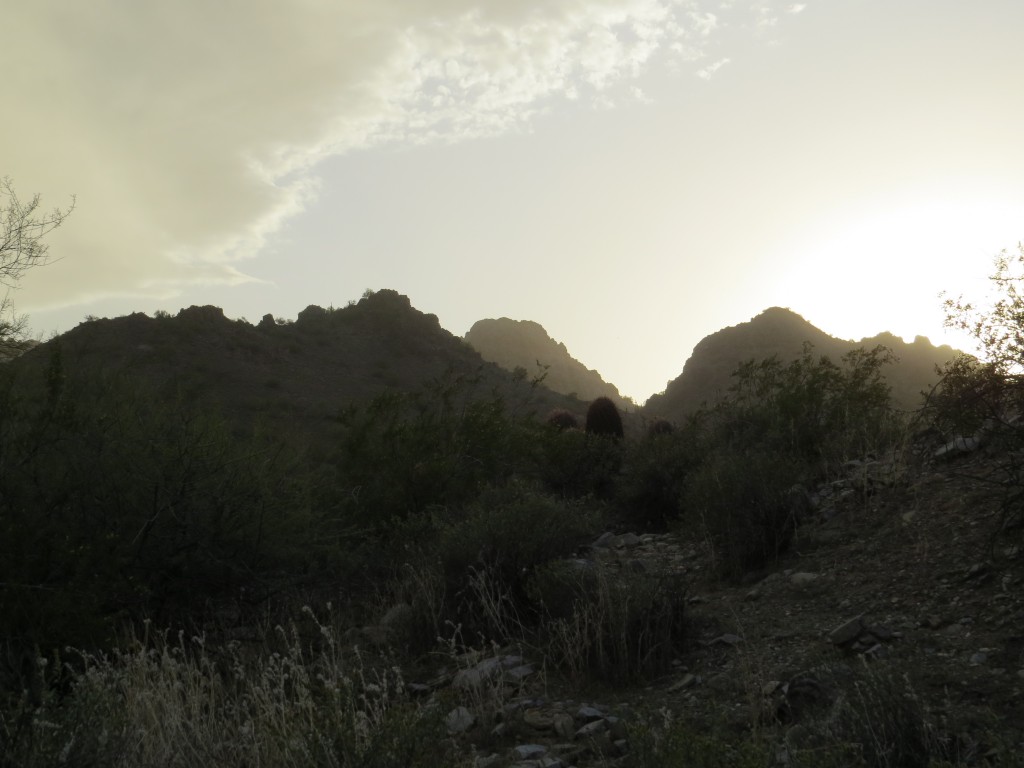 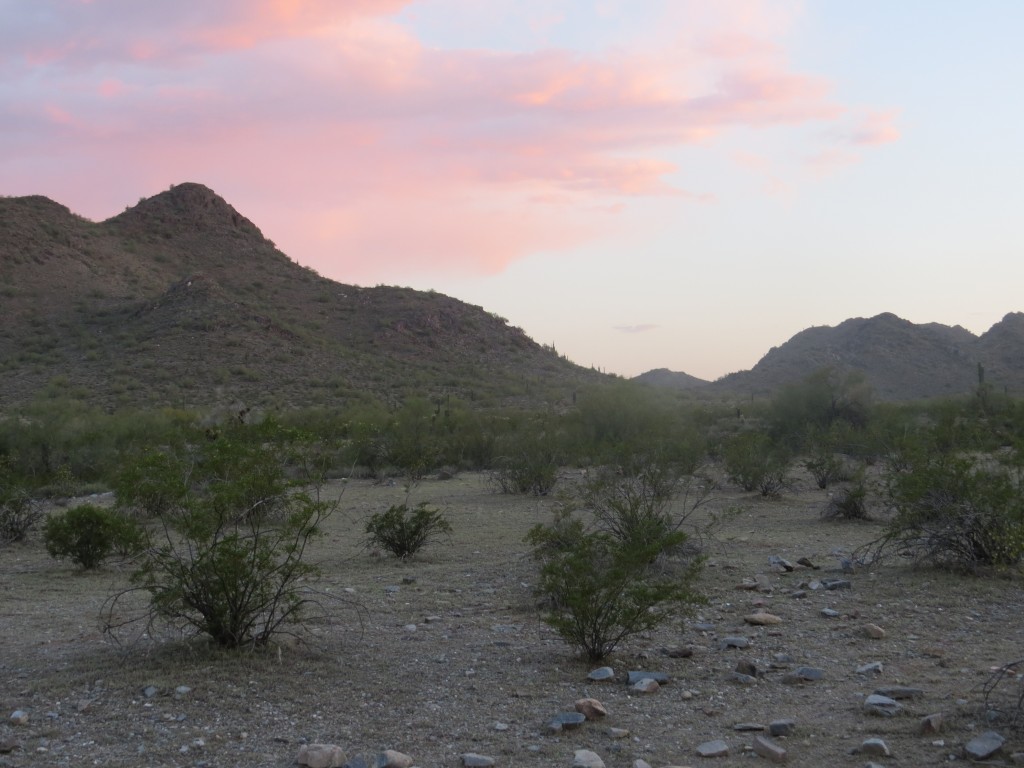 This birding outing with Butler could not have gone any better.  We enjoyed some outstanding views of some real desert beauties.  It was a pleasure to meet Laurence in person and go on an adventure with him.  I’m sure, over time, that we will join forces again whether that be in the Sax-Zim Bog or on subsequent trips to the Phoenix area.

There is one final post about our birding in Arizona.  Check back again to see what more we found before we went home to Minnesota.