On the second evening of our trip, Dad, Evan, and I went for a little drive around Maricopa where my folks have their house.  We were going to see what we could see, but first we had to check on the spot in town where they had seen the Burrowing Owls.  Earlier in the day, I had bumped into a fellow taking pictures of birds on the pond where we found the Cinnamon Teal.  He asked if I knew about the Burrowers and then gave me the exact intersection to find them.  He also described where their favorite wall perch was and told me where to find their burrow. Sweet!

Sure enough, we drove by that evening and both Burrowers were right where they were described. 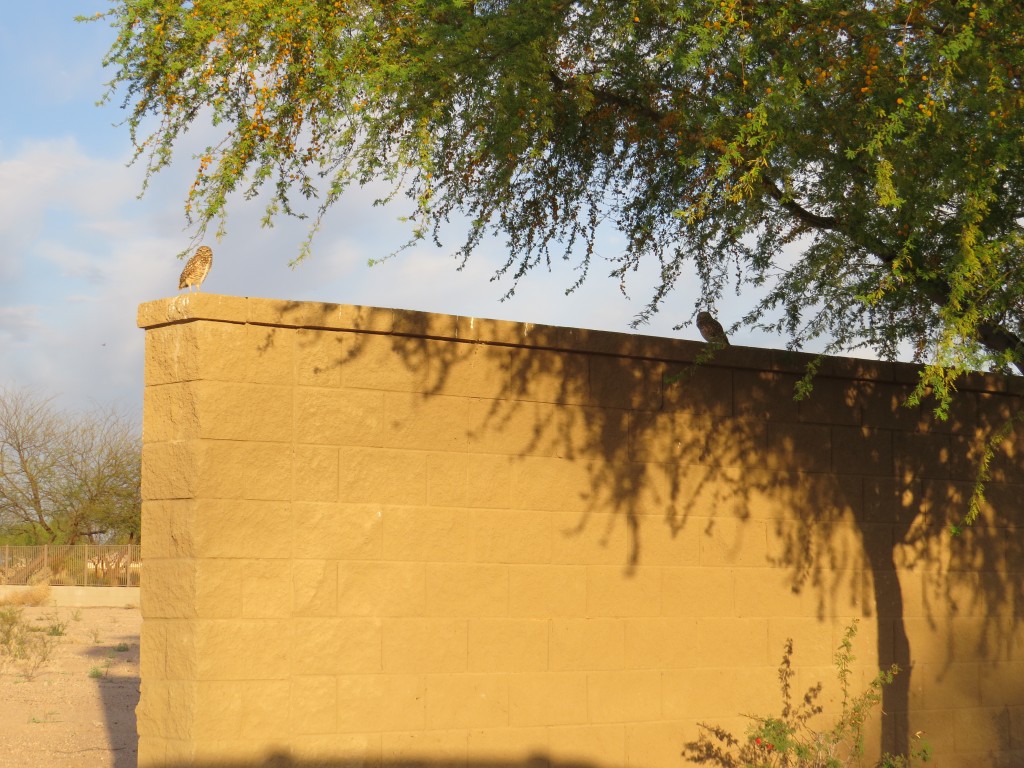 It was awesome to see them in the golden evening light.  Dad pulled up the car so they were on my side just 10 feet away allowing me to nab some stellar shots. 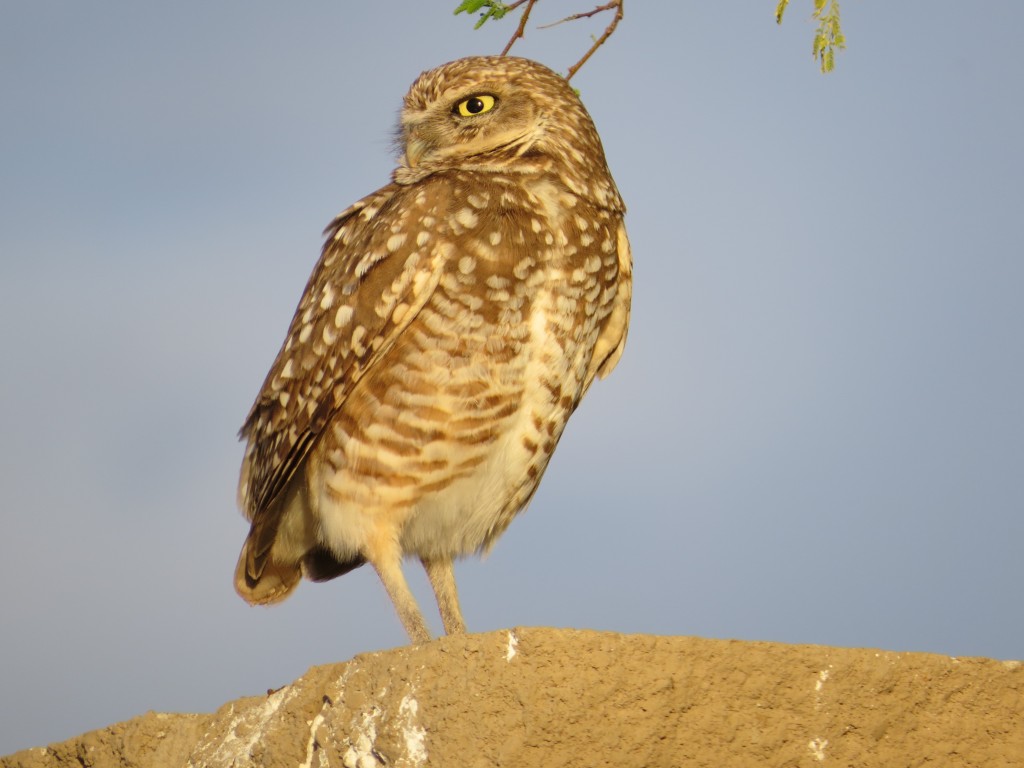 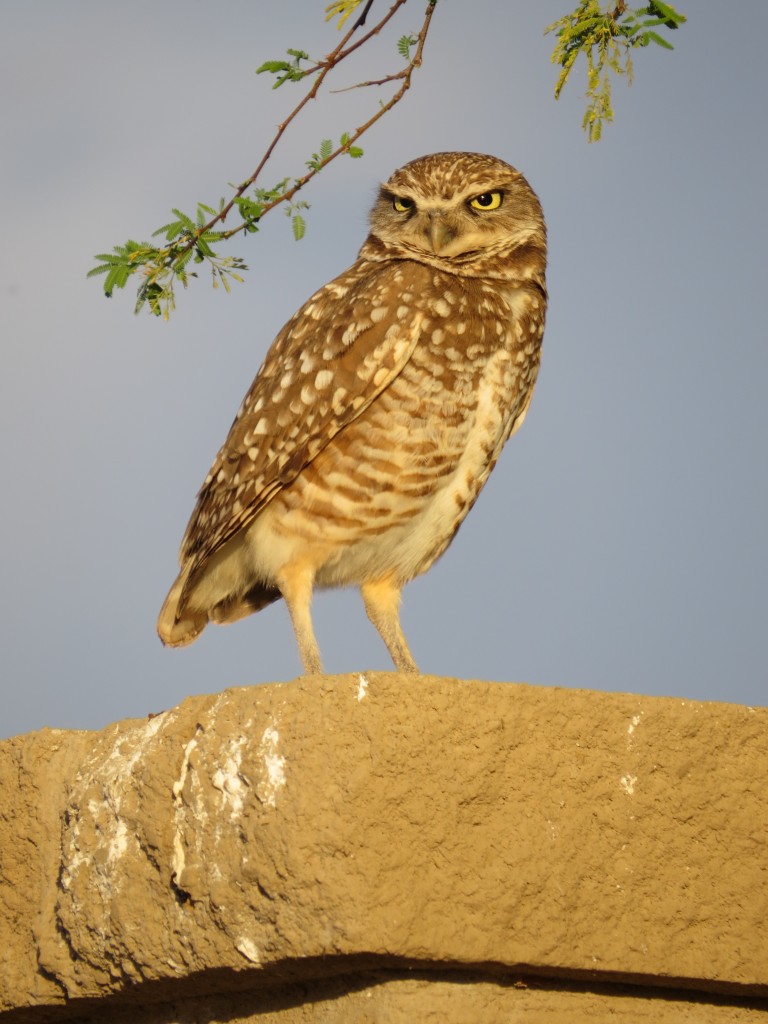 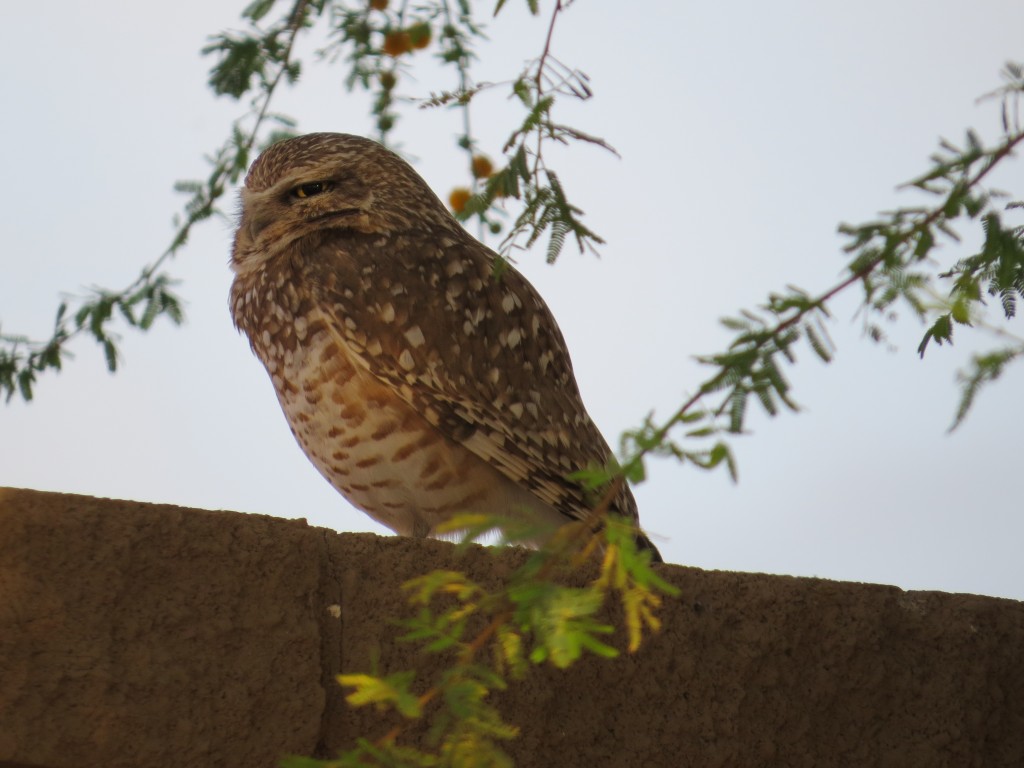 After snapping a couple photos, we rolled along.  Dad was going to drop Evan and me off at Pacana Park to do a little water birding while he ran an errand.  On the way to Pacana we found another pair of Burrowing Owls on a wall in town!  That made for 12 Burrowing Owls for the trip.

There wasn’t a whole lot for us at Pacana Park as the park was mostly athletic fields with lots of sports camps going on.  Of course it’s always fun to see American Wigeon, though. 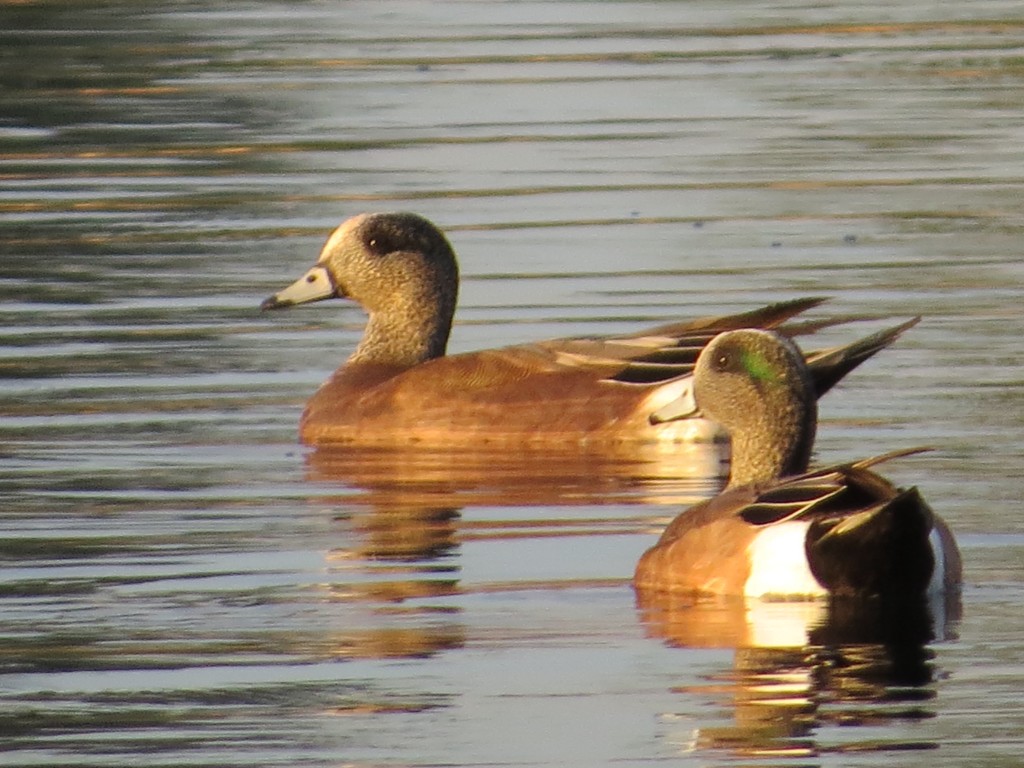 Evan enjoyed trying to trick a pair of Mallards into thinking he had food in his hand. 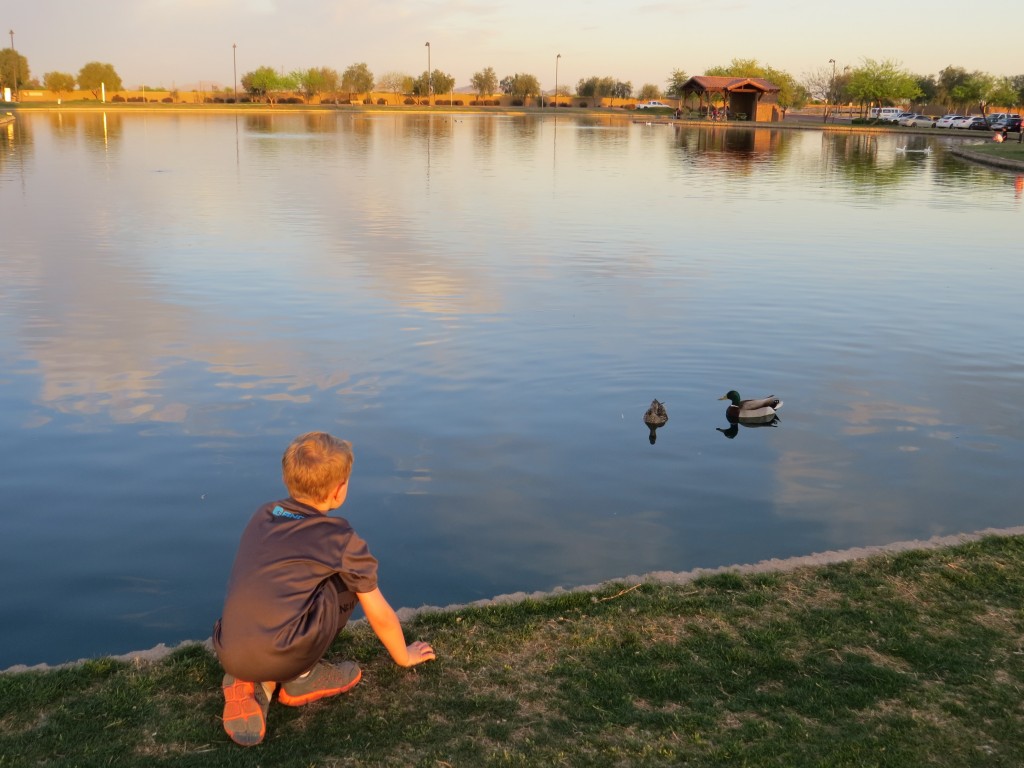 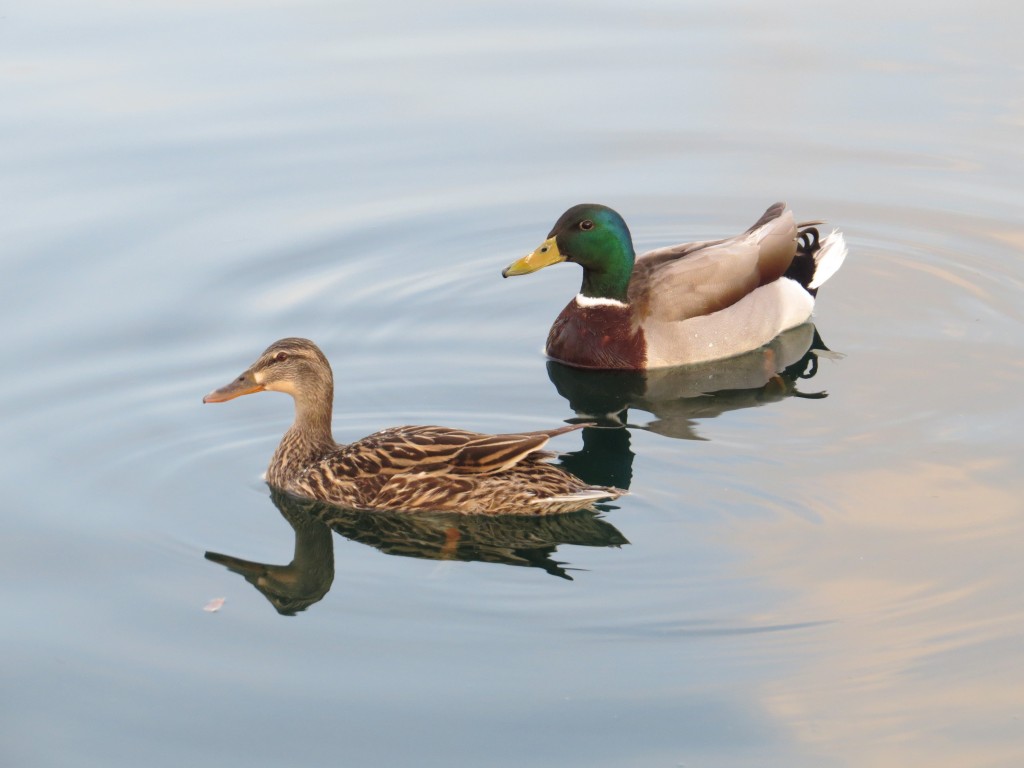 After Dad picked us up, we continued to poke around Maricopa with no pressing birding objectives. 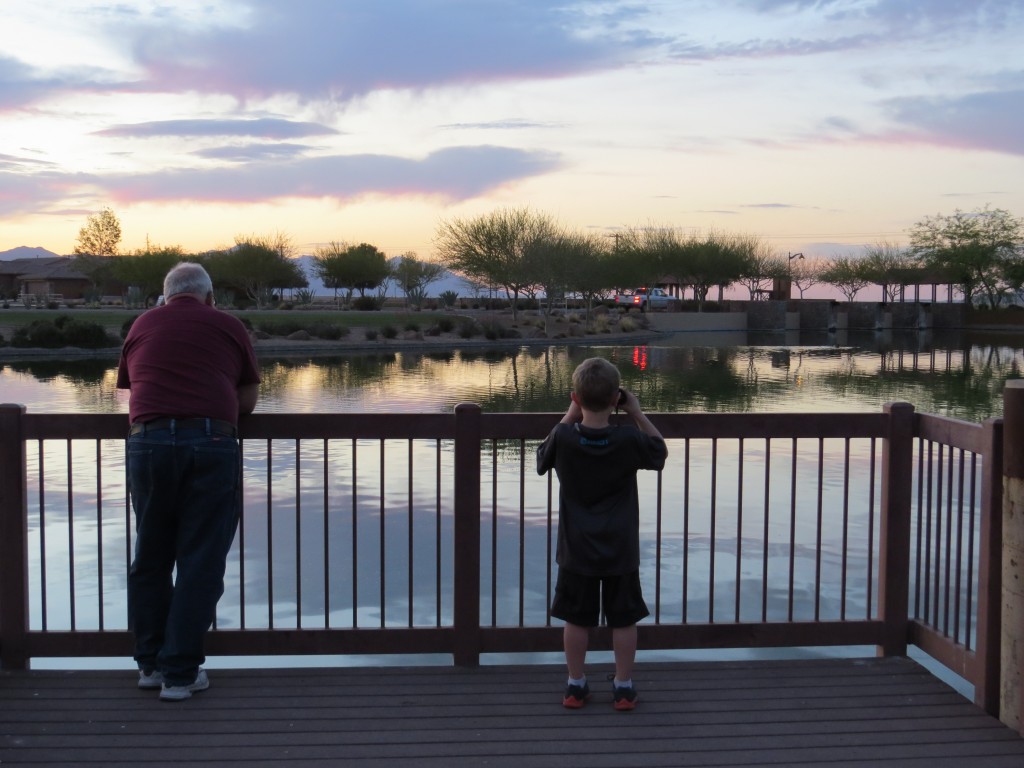 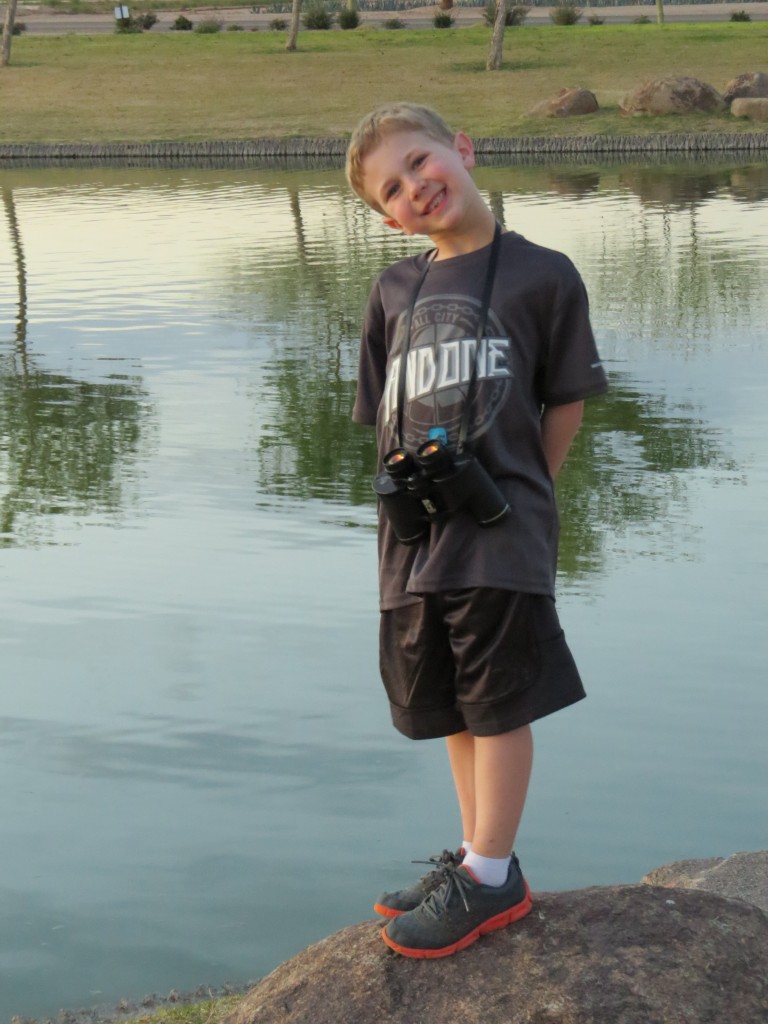 It was a relaxing evening with some good sightings.  All that was left to do was to enjoy another great Arizona sunset. 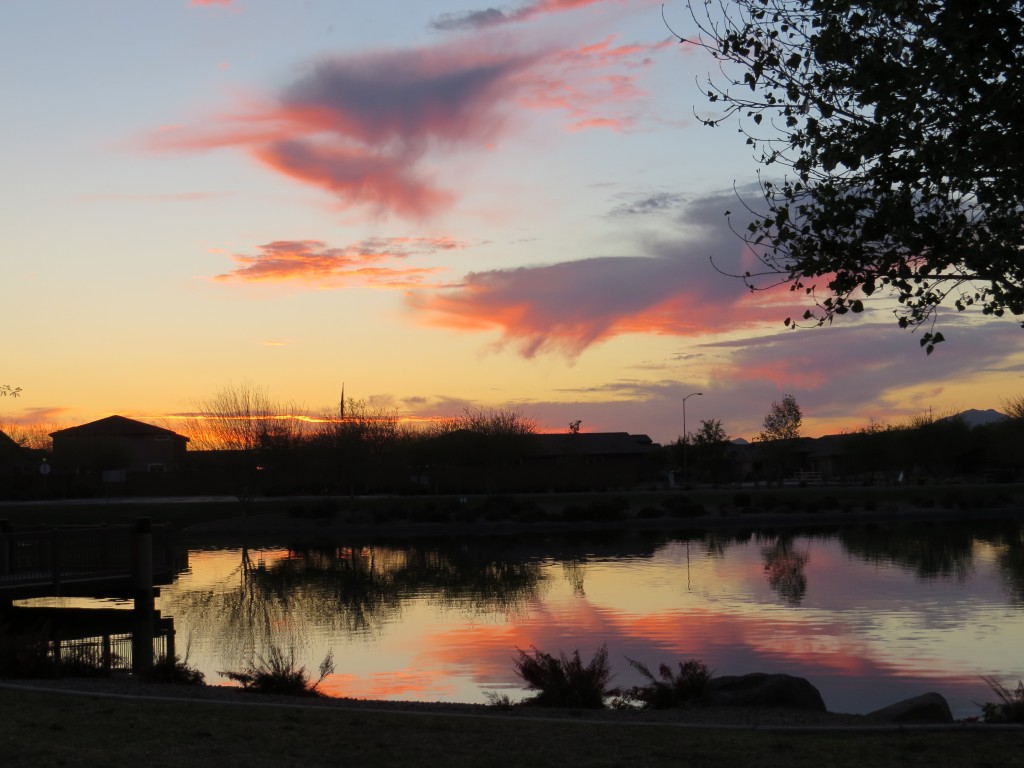 Having Burrowing Owls so close made it so easy and tempting to just go see them one more time.  I even goaded Melissa and Evan into taking our morning walk in that direction. Of course our little friends were out and about. 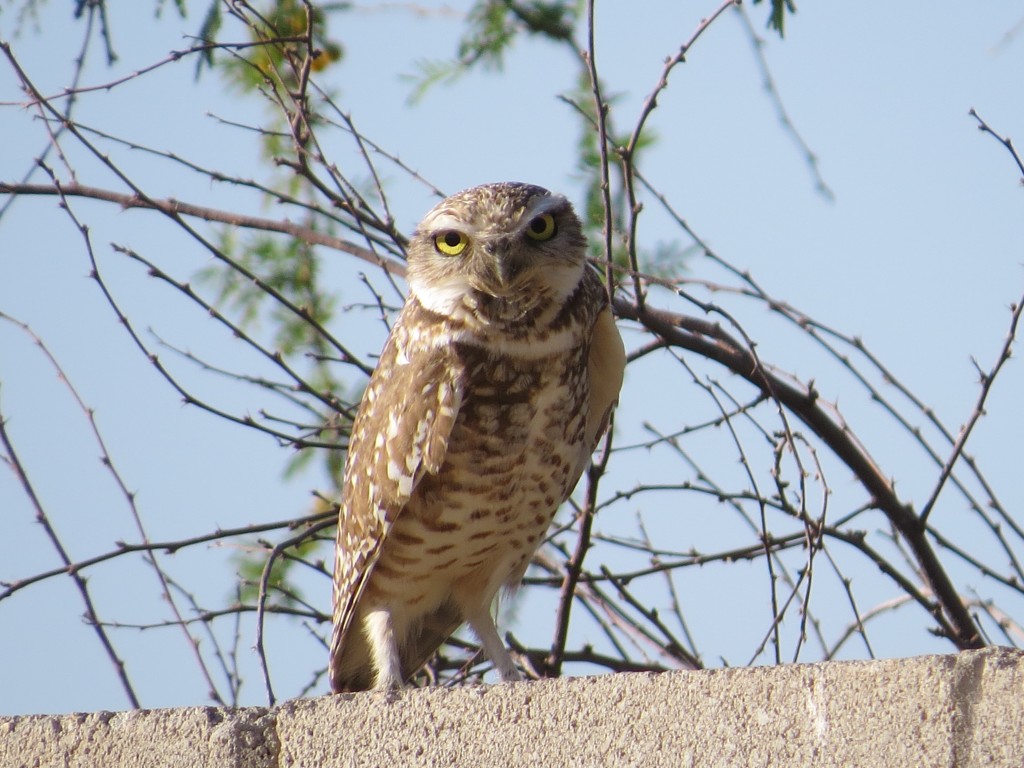 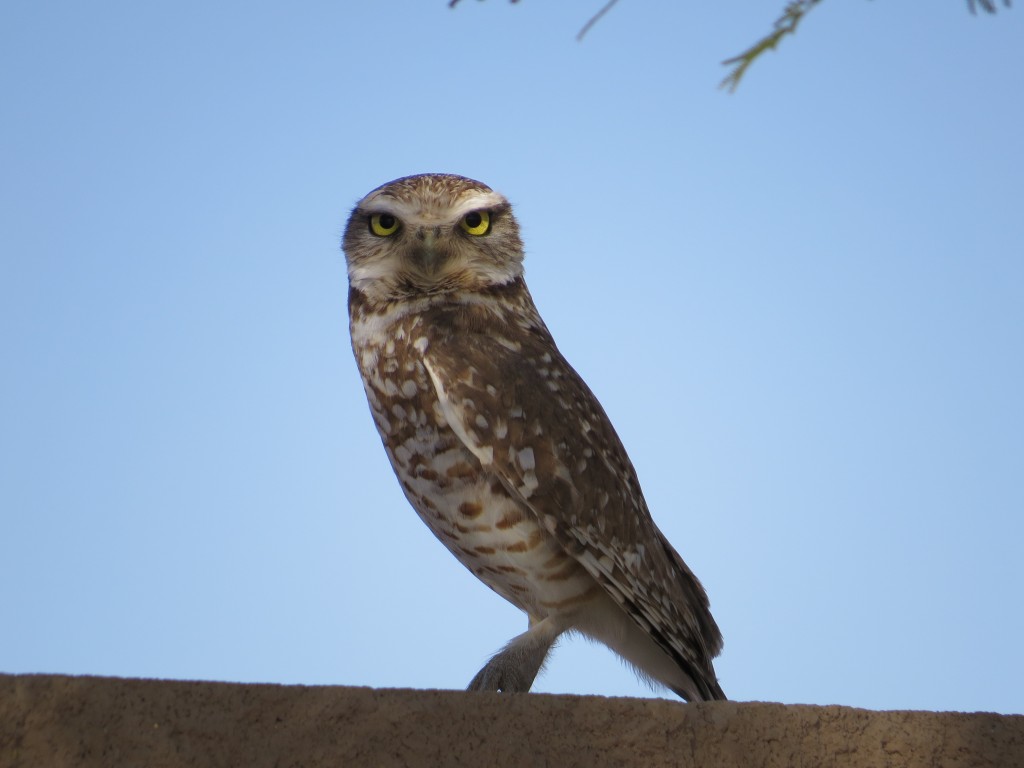 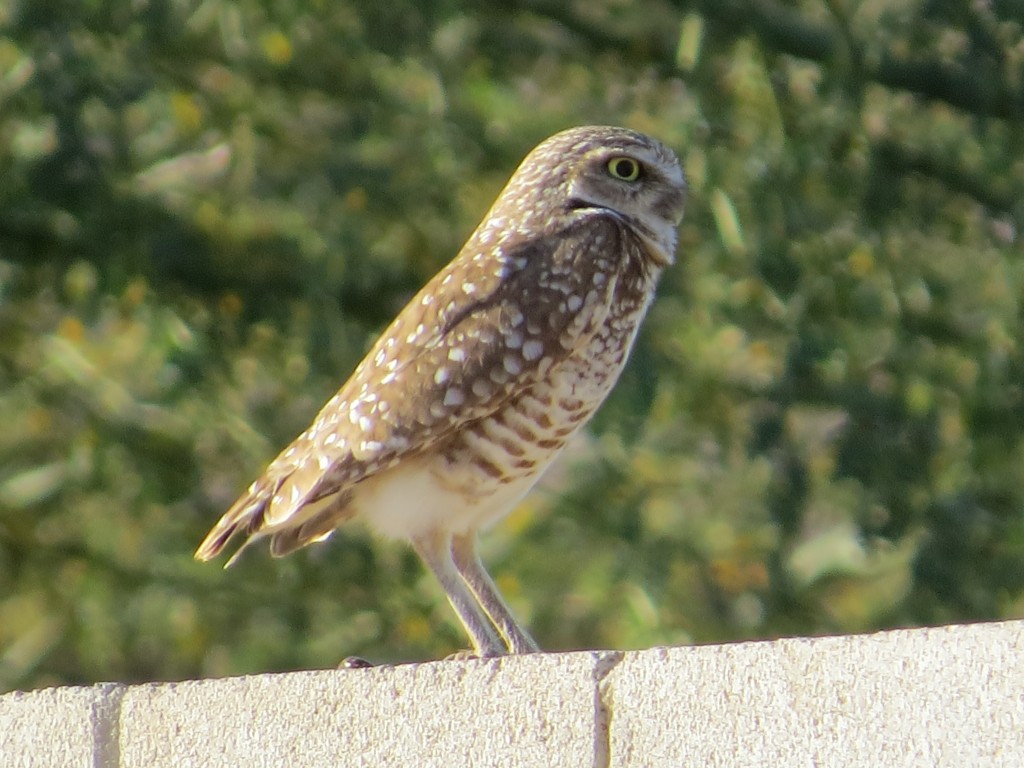 It was a lot of fun to show Evan and Melissa this pair’s burrow right under the sidewalk. 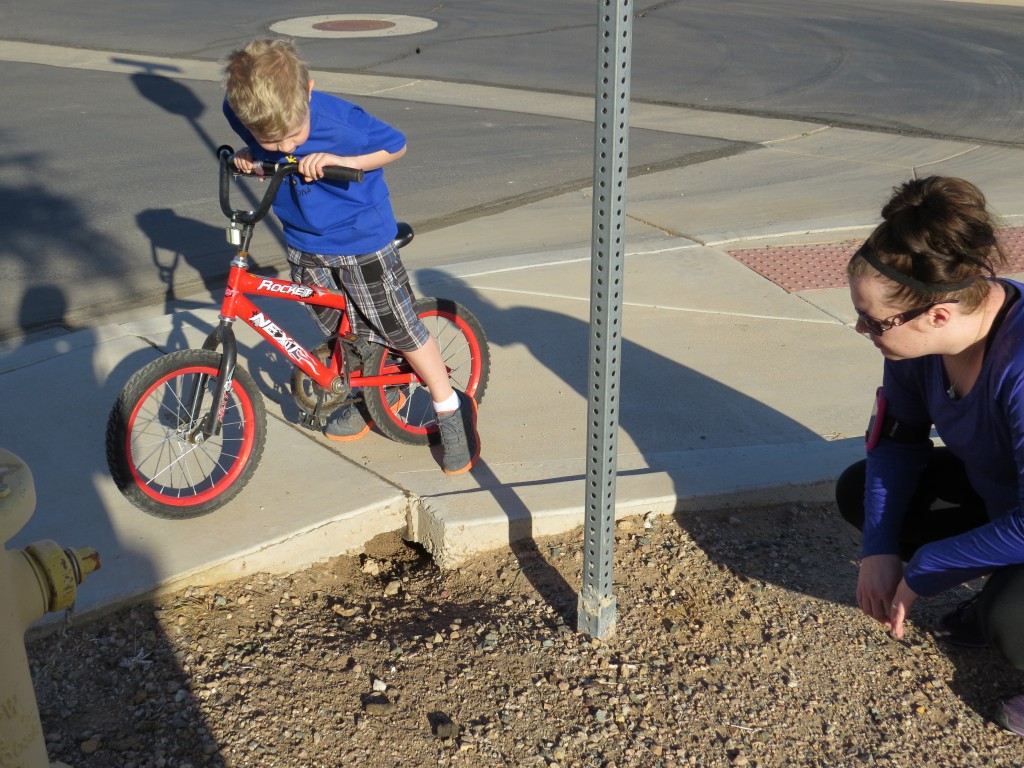 Being so close, I checked up on these guys a few times.  It’s hard to not photograph a Burrowing Owl.  One time I even got the shot, albeit a blurry one, that I wanted – the owl in its sidewalk burrow. 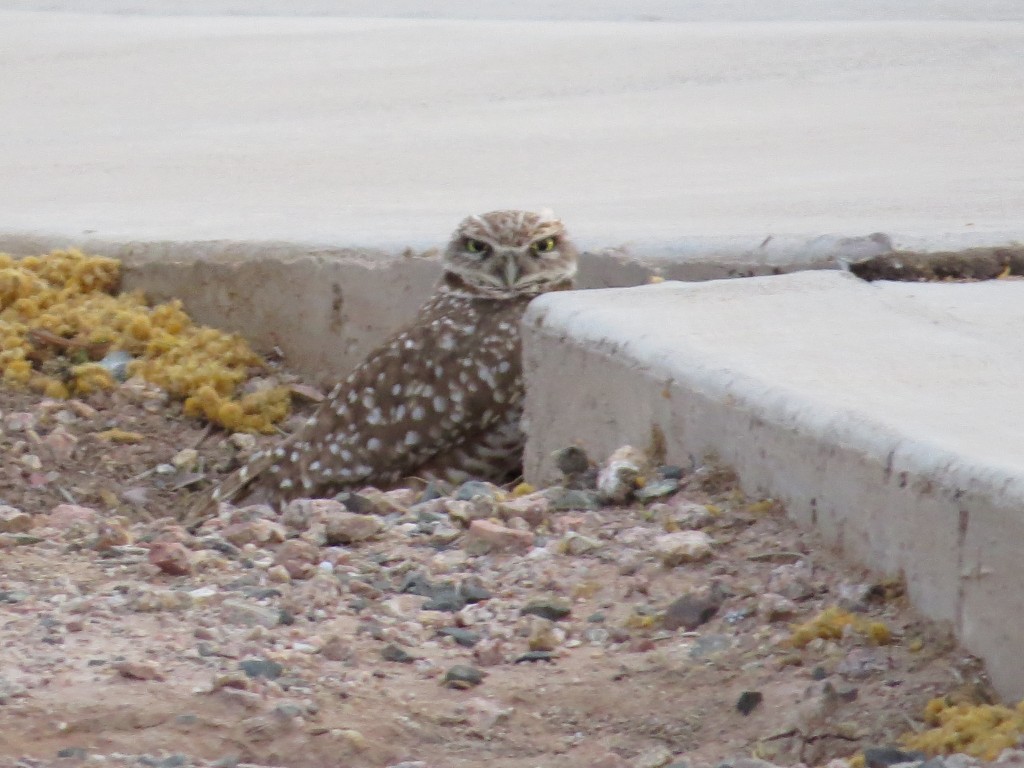 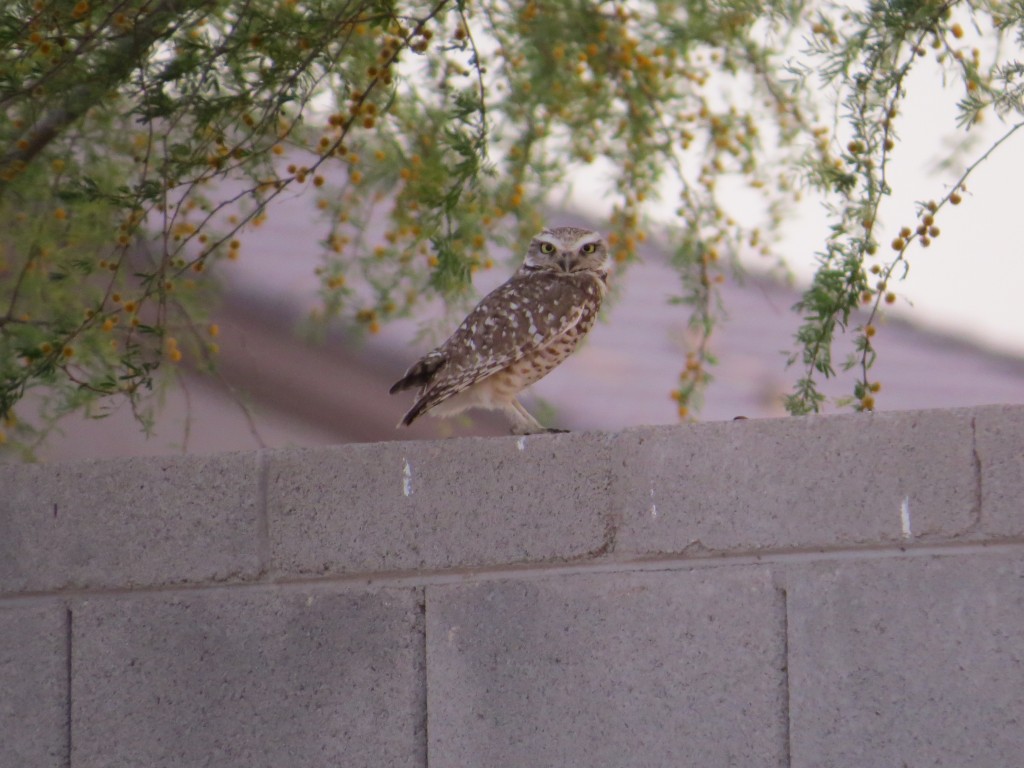 That same morning that Evan, Melissa, and I were out walking, we were passing by a park along a beautiful winding sidewalk through the deserty edge of the subdivision when we all saw a flash of red fly out of a tree.  “What was that?” Melissa exclaimed. I knew instantly.  It was the Vermilion Flycatcher!  I had given up on seeing this bird on this trip to Arizona because I had no plans to go near the ideal habitat.  Lucky us.  We were in the right place at the right time.  My initial photos weren’t great, so I went back a couple times to get some better ones.  This was a stunning find and my last major target bird for the trip.  This is one bird that I don’t think I’d get tired of seeing. 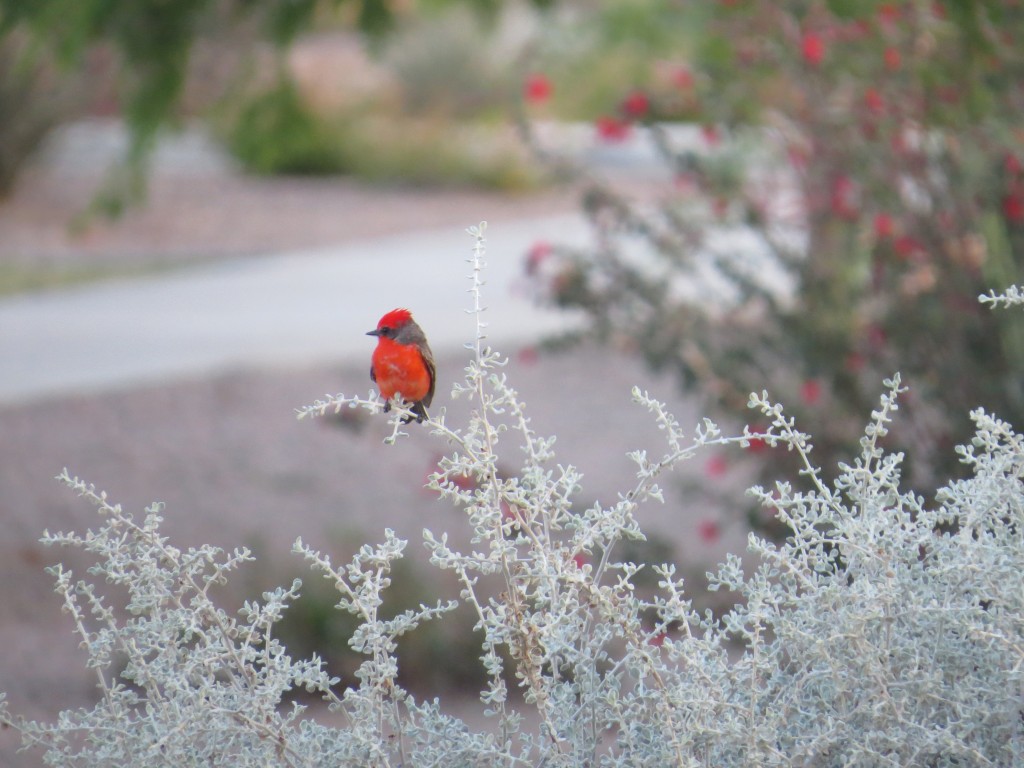 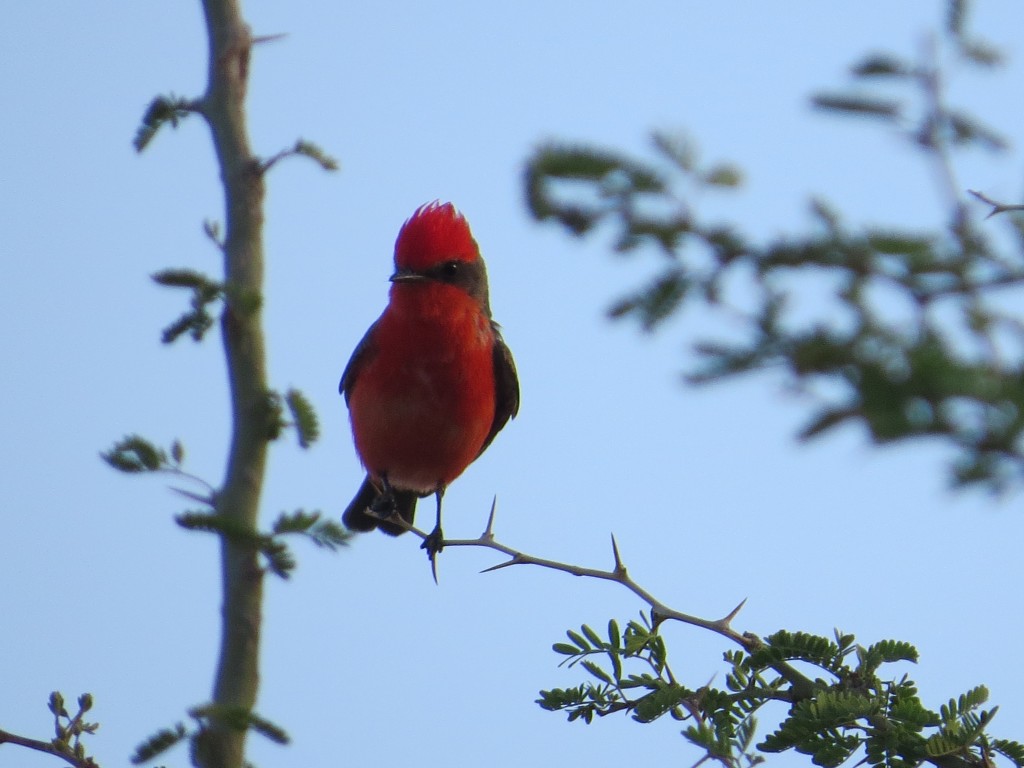 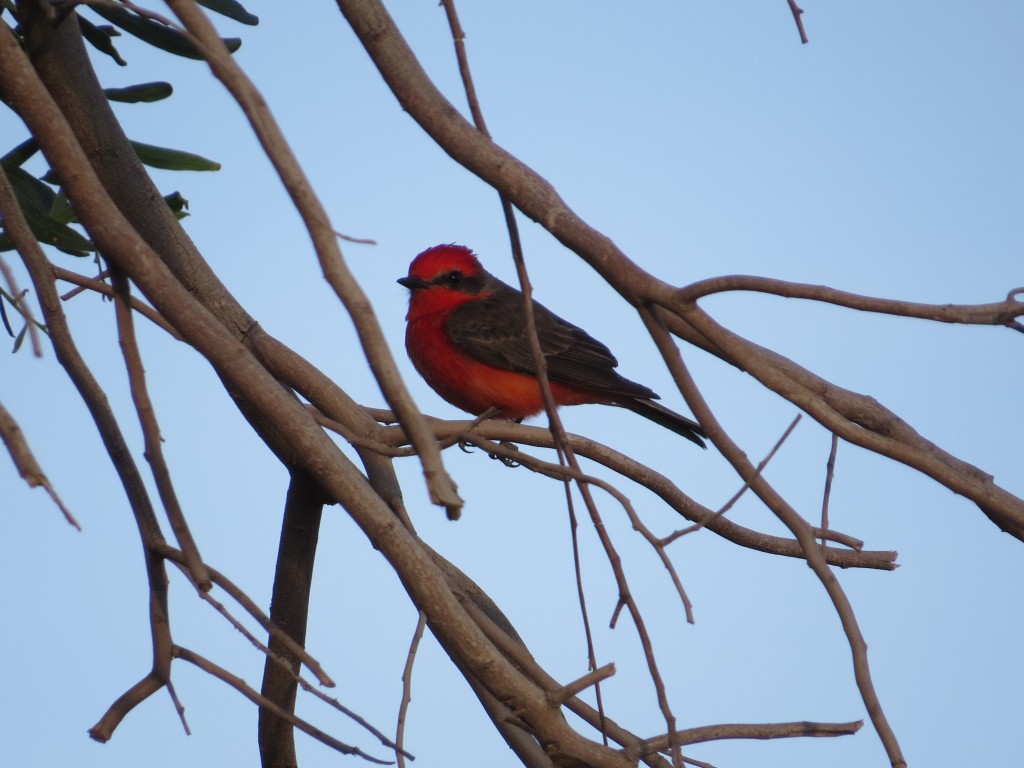 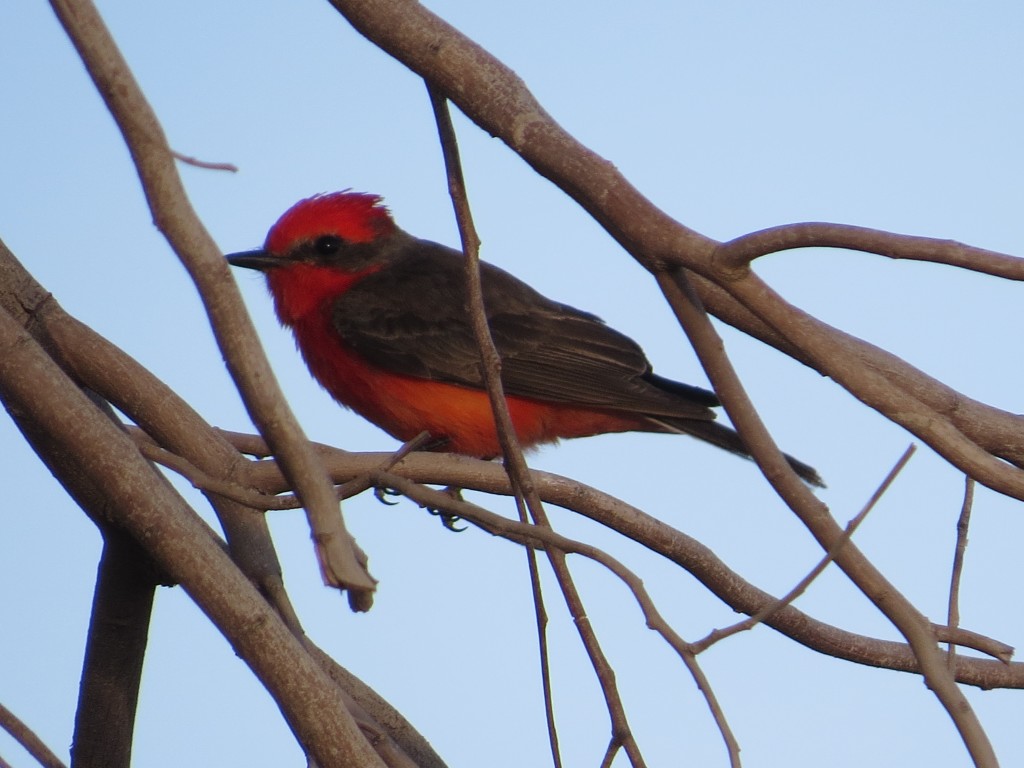 So all three major targets – Burowing Owl, Cinnamon Teal, and Vermilion Flycatcher – were all found within a few blocks of each other right in town and less than a mile from my parents’ house.  These avian treasures were fun to have so close because we could see them whenever we wanted.