Disclaimer: The Arizona series has been interrupted by a birding event so big that it might just cause the author to burst if he could not spew his memories and thoughts now. There is nothing Arizona-esque about this post. No cactus. No sand and rocks. Certainly no sunshine.

Birdwatching may seem like a peaceful, passive activity.  I can tell you that it is most definitely not that way for this birder.  The migrating birds appear deceptively serene as they glide through the air and stop by the feeders.  But they are on a tight schedule.  If they were people, you’d catch them watching the clock constantly, waiting for that moment they had to leave for their next stop on their way to wherever they’re final destination is for the spring.  The birders are watching their clocks and calendars too.  We have about a three-week window to find three species of migrating owls – Northern Saw-whet, Long-eared, and Short-eared – and that window just opened.

Yesterday after supper I decided to go to a Wildlife Management Area just a couple miles from the house.  There was a plantation of pines on the slough-dotted prairie – the perfect roosting spot for an owl layover.  I told Melissa I was only going to take a 15 minute walk around this stand of pines, a time-limit she should, and does, know is not realistic.  I asked Evan if he wanted to take a short hike with me before bed.  He declined.  Apparently the iPad had a greater pull this evening.

I got to the WMA in short order and began my walk toward the pines.  Canada Geese were standing on the ice of a slough, staking their claim for a nesting spot for when or if the ice melts. I saw a few Red-winged Blackbirds and listened to a Great Horned Owl hooting from the nearby farm place.  I was making careful observations of all my sightings because I’ve been doing more and more reports on eBird, a worldwide sightings database that isn’t widely used by Minnesota birders.  I knew no eBirder had ever walked this WMA, so I wanted to begin to tell its story for future birders and scientists.

As I walked a path between a shrubby area on my left and the pines on my right, I saw a chunky bird in the brush in the low light of dusk.  Pulling up the binoculars, I saw it was a migrating Fox Sparrow, an excellent find that already made it a good walk.  These guys are some of the coolest, toughest sparrows I know.  With their grumpy face and two-footed kicking action in the dirt, they are all-in, can-do sparrows with an attitude.  There is nothing half-hearted about them.  Not even a half foot of fresh snow on the ground is keeping them from kicking their way down to the grass for some food.  If Teddy Roosevelt were a bird, he’d be a Fox Sparrow – that’s how robust they are.  But maybe I’m just partial to TR since we share an affinity for Chestnut-sided Warblers. 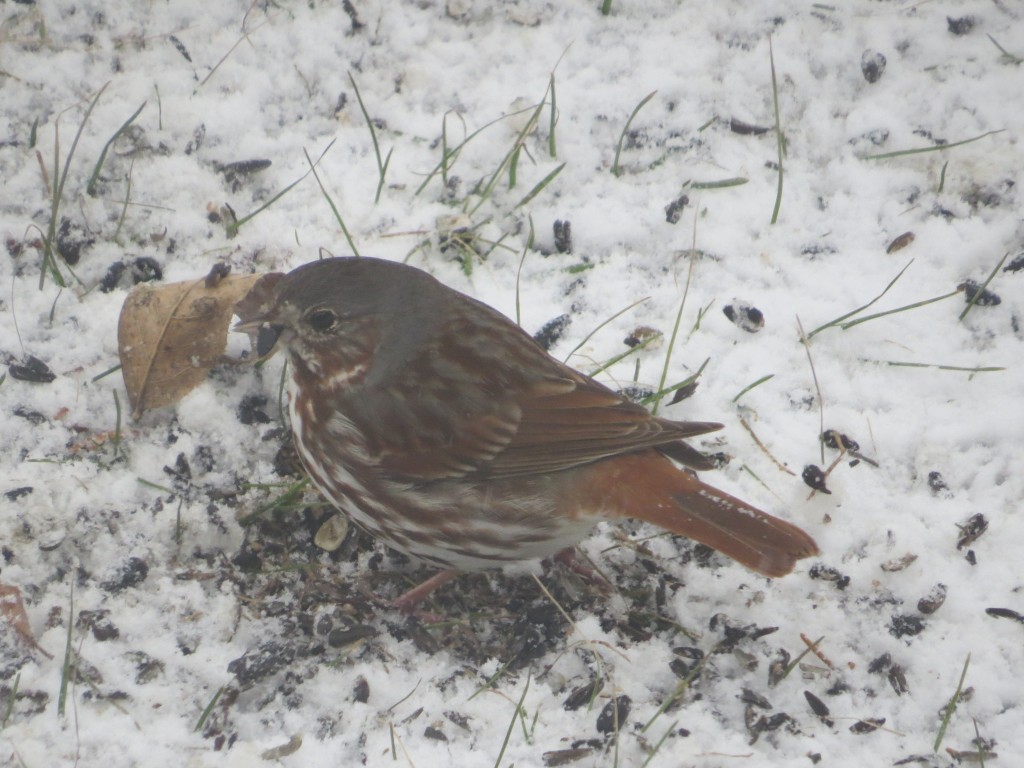 Not long after the Fox Sparrow, I see another chunky-type bird in the brush.  Another Fox Sparrow? No, no, a hundred times no. The binoculars revealed something far, far greater.  Rufous sides, black head and beak, white belly, white spots on the black wings and back.  I could not believe it.  I was staring at a Spotted Towhee, an obvious life bird for me but more importantly, a very rare bird for Minnesota. I had never even seen the locally uncommon Eastern Towhee, let alone the Spotted Towhee from the western United States! My mind was swirling, but I knew I had to get pictures or this green-horned birder would not be believed by anyone.  I fumbled for my camera and fired off a couple quick, horrible shots.  I knew my images proved the identity, so my thinking was thrown into an avalanche of thoughts about what to do next. Do I post it to the listserv from my phone right now? Do I keep chasing this bird to get that killer photo? Do I call my local birding buddies first? Do I run home to get Evan even though he is probably getting ready for bed and race back here to hopefully find it?  What do I do?

The bird was helping me make my decision.  It was in an isolated bush on the prairie and then moved to an isolated Cottonwood tree down by the large slough. Okay, I’ve got it pinned.  Photos can wait until after I get people mobilized. I knew I had to stay with the bird and couldn’t go home.  Certainly this bird was either a life bird, state bird, or county bird for my friends.  I decided to call Steve first.

As I was on the phone with Steve, I lost track of the towhee in the lone tree on the prairie.  Argh. I obviously can’t multi-task.  Despite the darkness that was closing in with the setting sun, Steve said he’d come out my way to help me search.  It would be a lifer for him, #300, in fact.

Steve got out there, and we walked around all the brushy places and the wet places in the vicinity of the sighting.  Nothing. No luck.  To add to the dejection, Steve hadn’t worn any rubber boots and ended up getting wet feet in the slough. I felt bad that Steve didn’t see the bird. I felt bad for Steve’s feet. I felt bad that Evan didn’t come out. I felt bad that I didn’t get the photo I wanted.

Here are the shots I got.  No, they won’t win any blue ribbons at the county fair, but they are still cool souvenirs of the best bird I have discovered on my own. 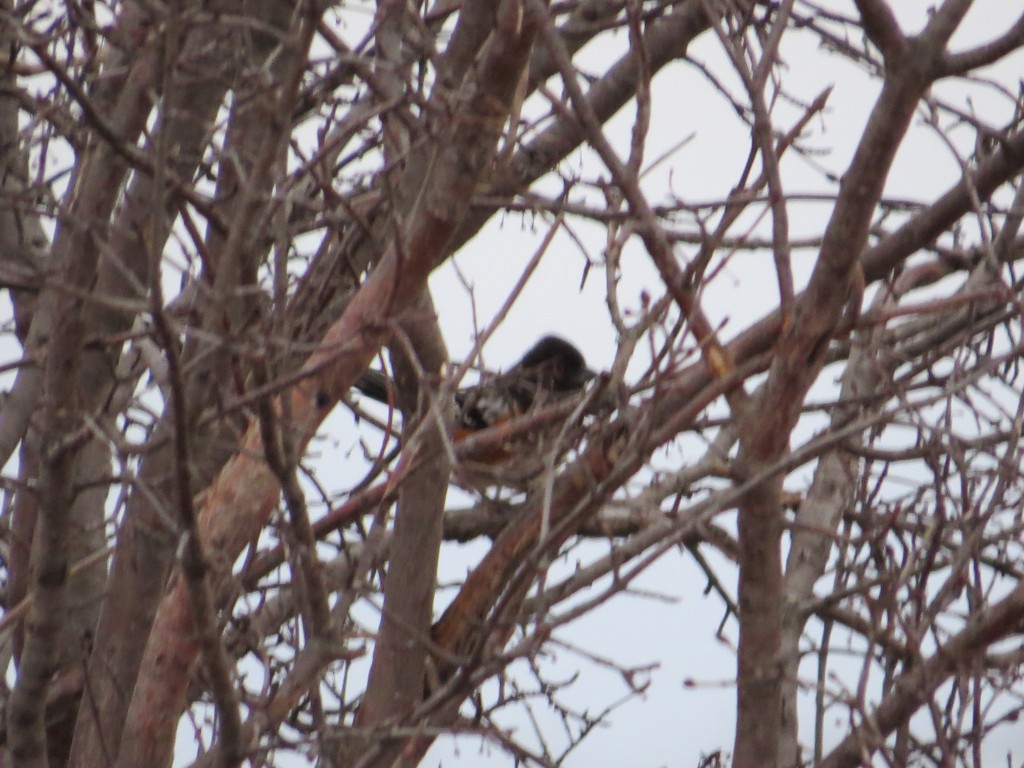 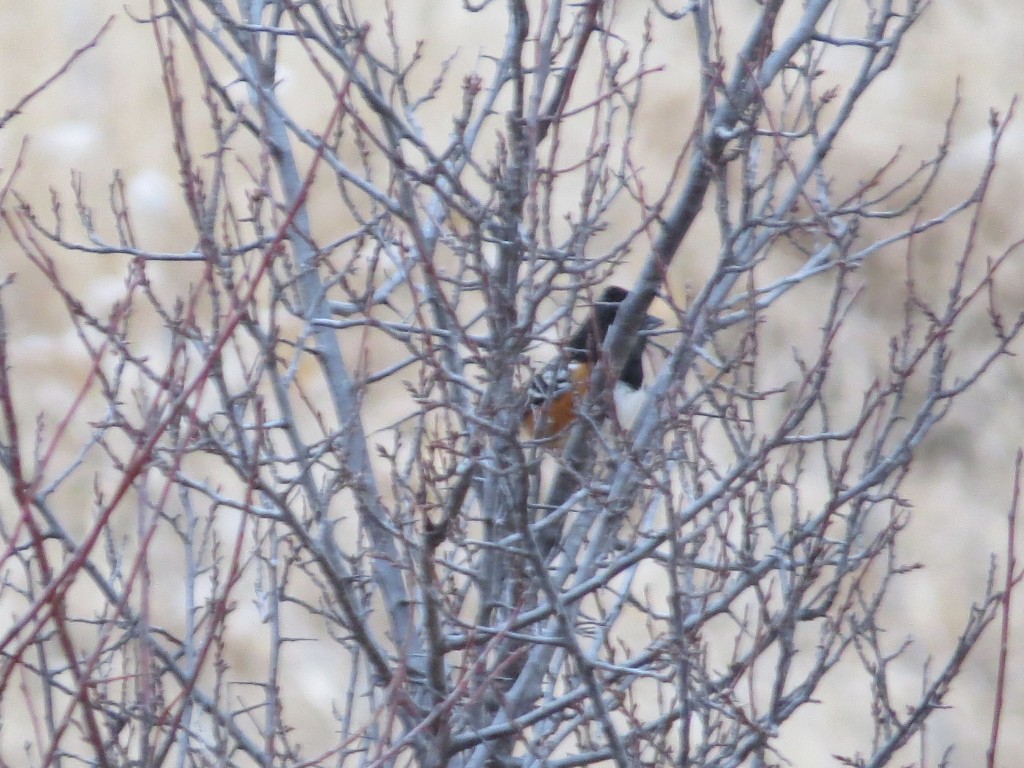 It has always been a goal of mine to find a really good bird on my own and be able to share it with others.  I’ve reported a lot of Snowy Owls to the birding community, but all of them have been reports handed to me by my non-birding friends and coworkers.  I’ve seen a lot of rare birds because of the skill and generosity of other birders.  I’ve always been sort of a birding mooch, not ever much of a contributor. This was my own, bonafide discovery of a rare bird that others would indeed enjoy.  It was only the second time a Spotted Towhee has been reported in Kandiyohi County, and only a handful have ever been reported in Minnesota on eBird.  Despite that others didn’t see it and that I didn’t get superb photos, I was still very excited.

Last night as I was going to bed processing the ups and downs of the sighting, it occured to me that I saw some cribbing near the sight of the towhee that contained corn silage.  Juncos and sparrows were feeding on the kernels all over the ground.  It was a feeding station that the DNR had put out for the wildlife. Then it hit me that the Spotted Towhee, a bird known to frequent feeders when it does visit Minnesota, might be using this as its primary food source.  Maybe it was some freak sighting of a migrant bird. Or maybe it had been there for awhile and will continue to be there.  I went to bed encouraged – for Steve, for Evan, for myself. I would be back the next day after school to check it out.

So that’s what I did, even though a roaring blizzard had just started.  Joel beat me there by ten minutes.  I was puzzled when I pulled into the parking lot and saw him in his car. He got out and said he’d already seen it!  This was a state bird for Joel.  I immediately got ahold of Steve who then bailed out of work to meet us.  While we waited for Steve, Joel and I did not refind it.

Steve got out there shortly, wih rubber boots this time. In fact, he brought them to work just hoping I’d call.  Steve and I explored for upwards of an hour before we finally found it again!  We had great looks at it out in the open in the very bush I first found it in, but the deluge of snowflakes and distance from the bird kept me from getting nice photos.  So for now, I can live with these.  I will certainly be back out there to get that perfect shot and to help Evan get this phenomenal lifer. 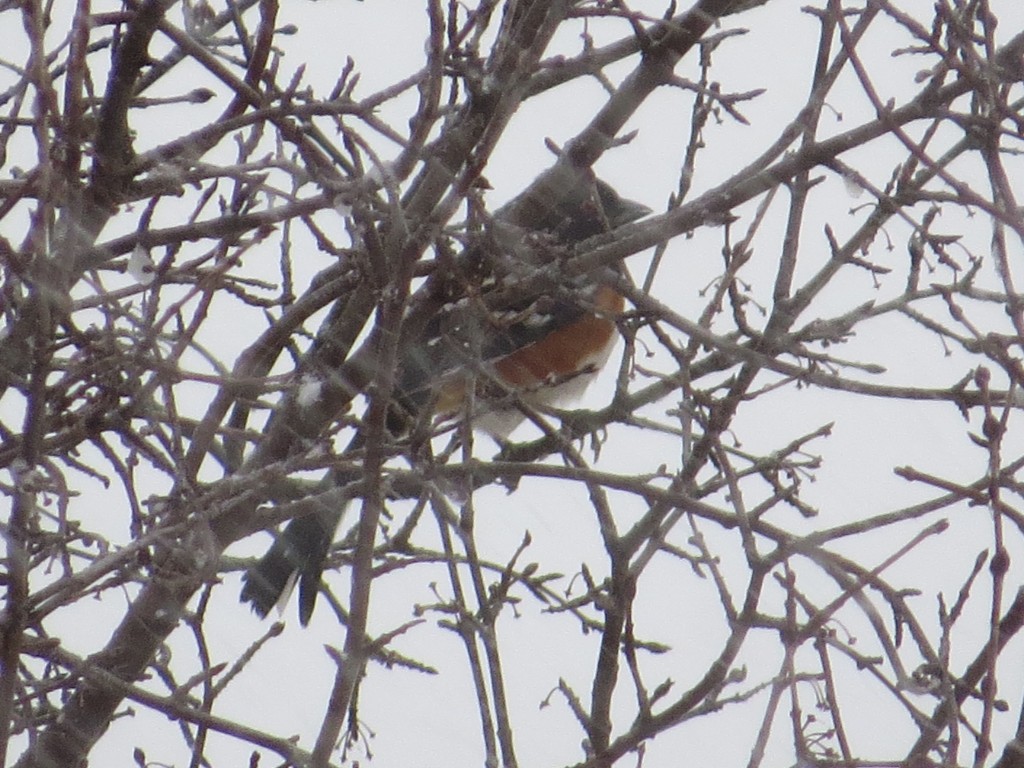 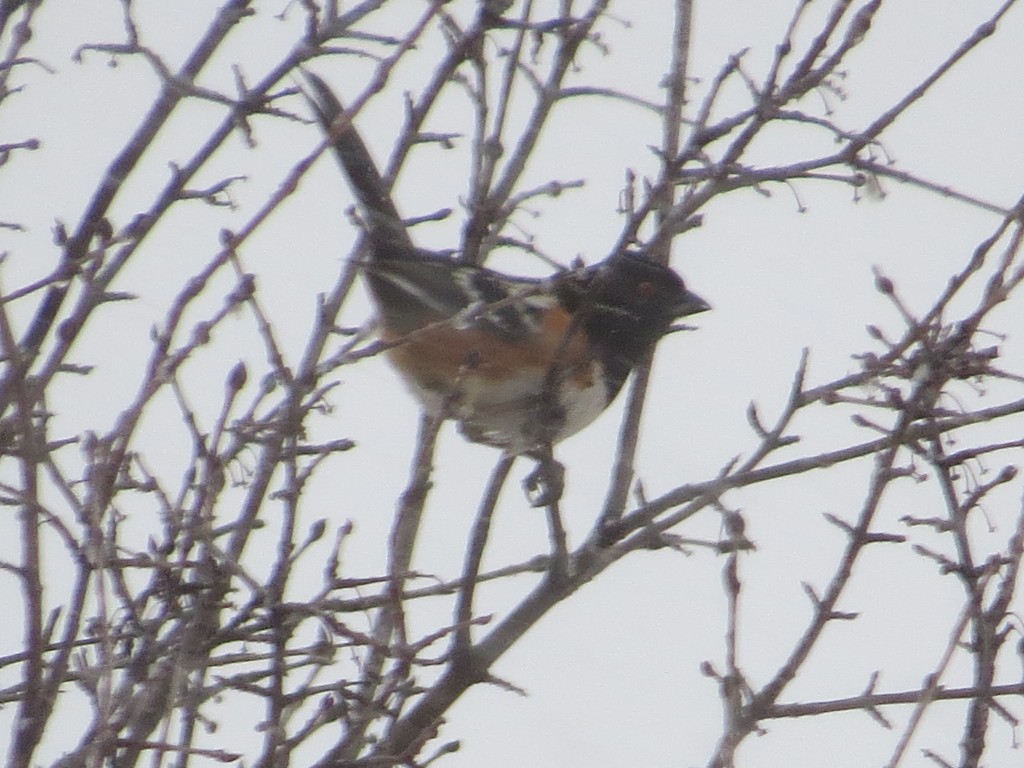