Birding has been intense this past migration. County birds and new life birds have not waited for me to write up trip reports this past April to SE AZ or even this past February to Duluth! It has been non-stop action which is great for birding and listing but not so great for blogging and documenting. Needless to say, there is a backlog of photos, tales, etc that need to be shared, and frankly, I find the task daunting. So I will chew this elephant one bite at a time by giving a relatively brief run-down of 5, yes 5!, genuine life birds I have seen in MINNESOTA over the span of four weeks. In the last couple years I have tried to scale back on my chasing by only going after true life birds. I have given up on making long distance chases for mere state birds.  Even under these new self-imposed rules, I have been super busy…

On April 29th, I chased a female/1st year male Painted Bunting that showed up at Paul Suchanek’s farm near Owatonna, an unseemly mecca for all kinds of rarities. Seeing PABU was one of my main birding goals for 2018, though I was kind of holding out for the more splashy adult male. But as they say, beggars can’t be choosers. At least I could choose a cute companion for part of my chase–Marin joined me on the trip for a 1/3 of the way so she could hang out with her grandparents in Hutch while I continued on. It was nice to have the company, however brief. 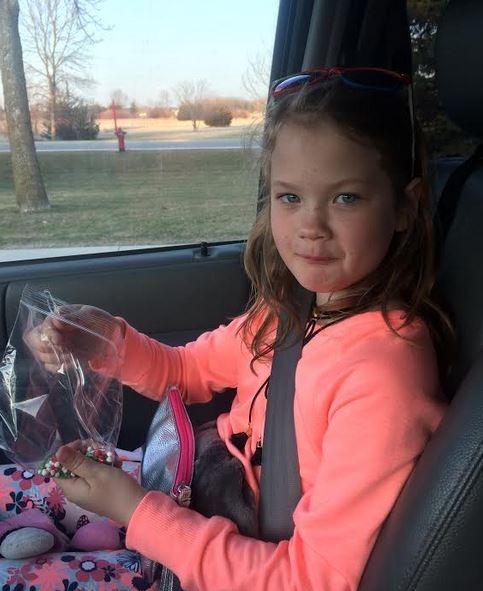 I was expecting this to be a 5-hour round trip dip, honestly. The wind was ferocious that whole day, something I was sure that would move the little vagrant along. Apparently Paul’s set-up was just too bird friendly because the PABU persisted giving me a bittersweet lifer (I wish it was a male). 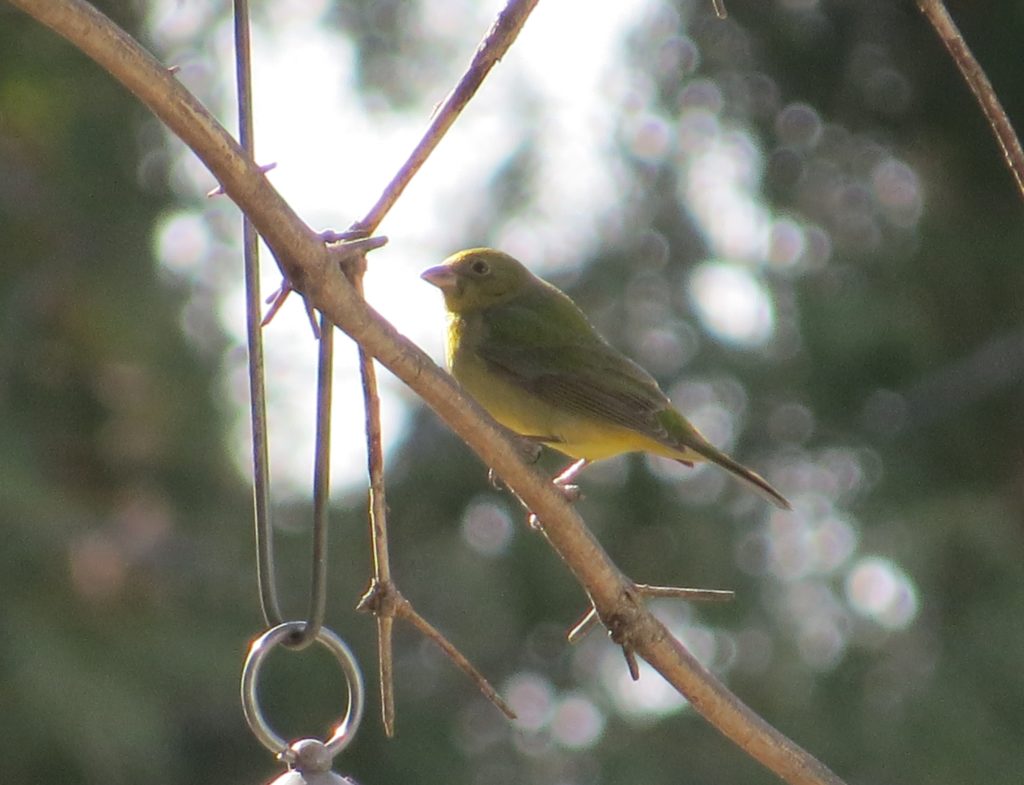 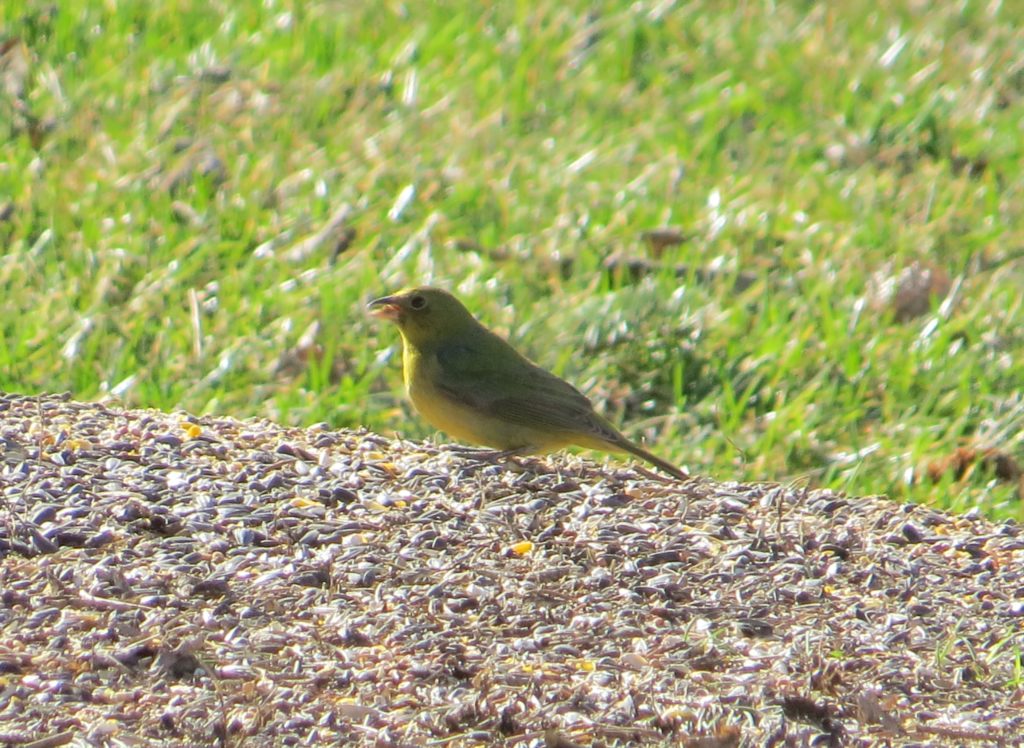 On May 5th, the kids and I chased a Kentucky Warbler in Northfield, MN. Despite a solid effort, we came up short. So here’s a picture of a Barred Owl we saw in the place of a Kentucky Warbler. Despite their cool factor, Barred Owls do little to sooth the pain of a half-day dip. 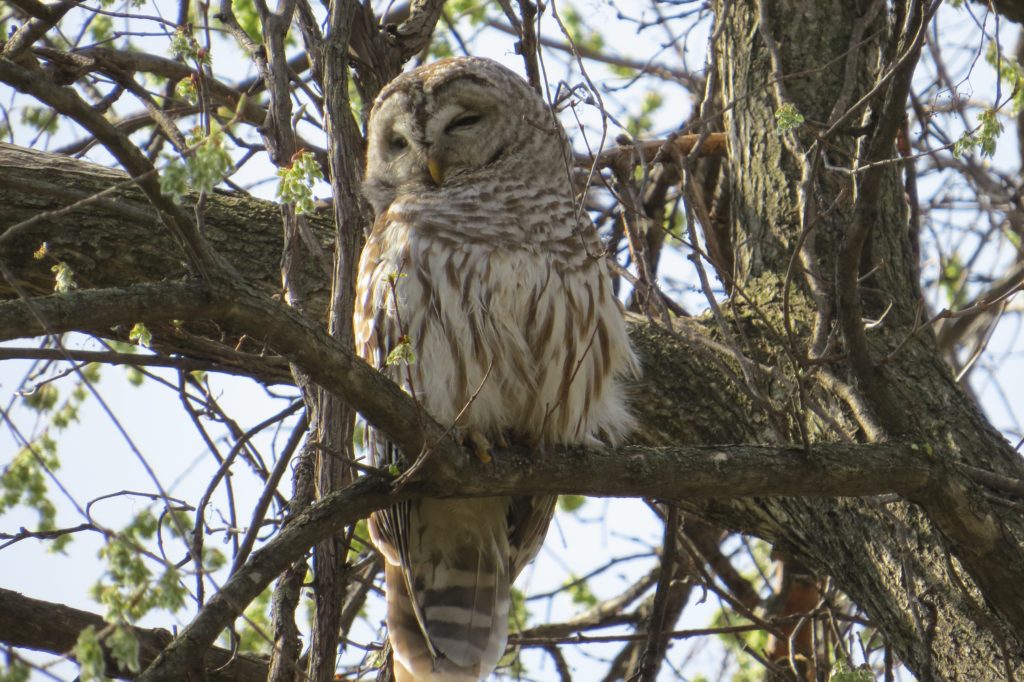 On May 8th, birding phenom and fresh college grad, Garrett Wee, sent shock waves through the Minnesota birding community with the discovery of the state’s fifth ever Curlew Sandpiper. Since this bird was a mere hour away at Lone Tree Lake by Cottonwood, it was an easy chase to make. Steve Gardner and I headed down there immediately after work. Garrett was still there, like a proud papa, greeting all the guests that came to see his baby. It was a stunning find that Garrett picked out from the nearly 2,000 shorebirds feeding in the shallow lake. Wind and distance made for very difficult viewing and photography conditions. I’m not complaining, though. How can I when I got to see a shorebird I never thought I would see? 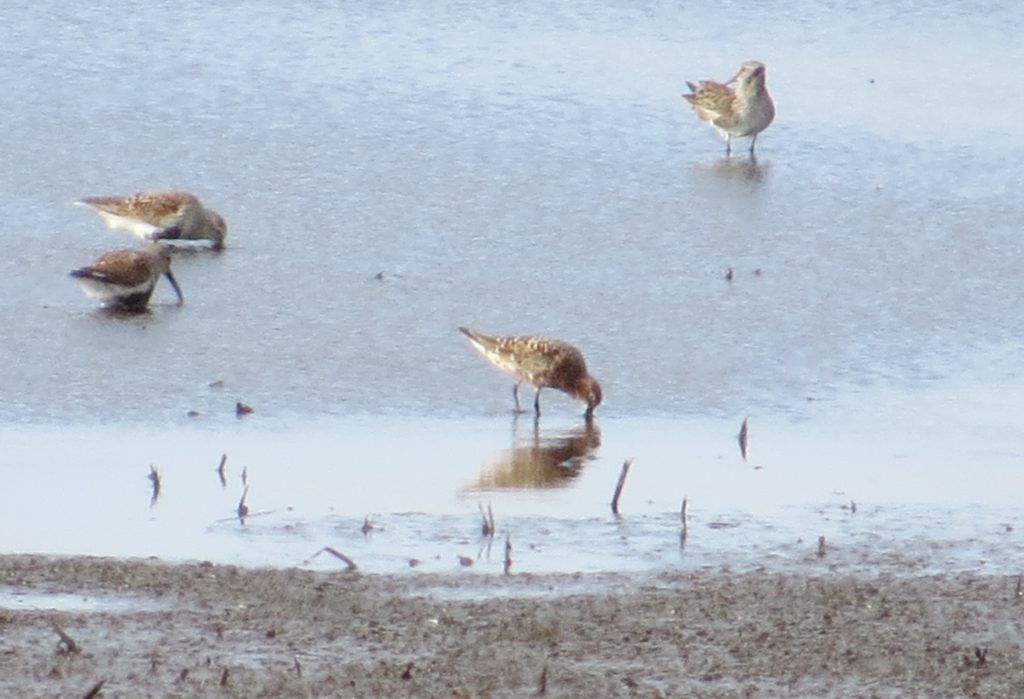 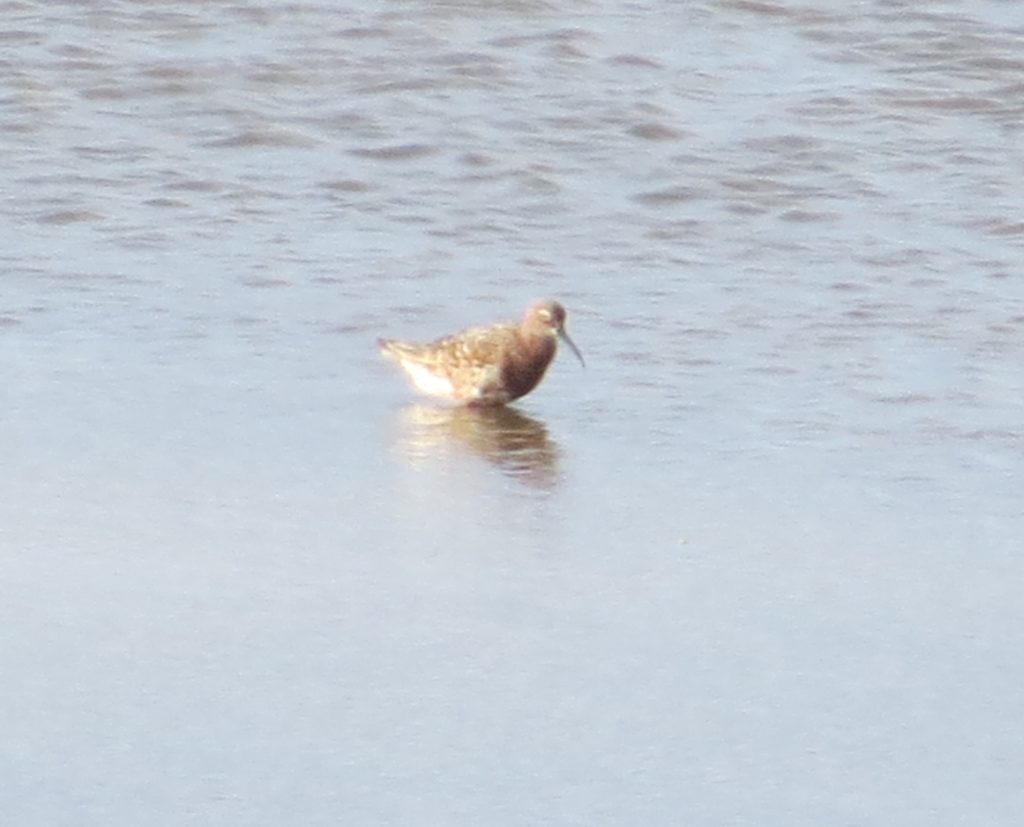 This story gets a little more interesting than just a really rare bird. There is a county listing married couple in the state, Barb and Denny Martin, who travel the entire state amassing tics everywhere they go. They’ve been at this awhile and have a very impressive total of 399 and 400 MN birds. The discrepancy bird? Curlew Sandpiper. Needless to say, they came screaming in from the Twin Cities and got on site while we were there. I wasn’t paying attention when Barb was telling someone else the backstory on how the discrepancy came to be, but regardless, there can be peace in the Martin household now that everything is tied up at 400 apiece.

But wait, there’s more. The intrigue doesn’t stop with the Martins.  Back on December 1, 2017, Garrett posted about the potential of this shorebird spot, and birding legend, Bob Dunlap, prophesied this very moment: 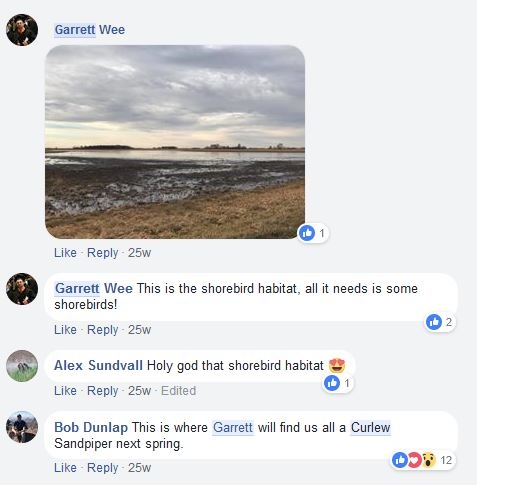 The fulfillment of the prophecy only served to heighten the lore of Bob and Garrett in the minds of us commoner birders.   To stoke that sentiment even more, Garrett had another great find two days later with the discovery of 15 Smith’s Longspurs at the Echo sewage ponds, including several breeding plumage males. Even though this species passes through Minnesota (and likely Kandiyohi County) every year, I still have never seen one. Once again, Steve and I made an after work chase. This time we got a much later start and only had about 45 minutes of daylight to look. We turned up nothing when we walked the entirety of the small sewage ponds. Then, in a final last-ditch walk with barely any light, I detected the birds vocalizing in the corn stubble field adjacent to the ponds. Steve and I pursued them hoping to get visuals, but we were fighting low light and the bird’s good camouflage.  Steve played a tape, and we had one sing in response. I did catch sight of one bird, seeing its buffy chest, but the look was fleeting and unsatisfying. Still, it was better than nothing.

On May 22, Steve and I were again on the chase when county-listing gurus, Andy Nyhus and Dedrick Benz, found 11 Whimbrels at the famed North Ottawa Impoundment in Grant County. North Ottawa put on a strong showing in 2017, coughing up rarity after rarity. One would think it would have nothing more to offer, but obviously the Whimbrel find proved that wrong. Steve and I almost didn’t complete the chase as we were in contact with another birder on site who wasn’t seeing them at the original location. Whimbrels are notorious for disappearing in a hurry, so I was skeptical. Steve thought we should complete the 1.5 hour trip there anyway. Once we got there, we ran into big year birder, Liz Harper, who came from the Cities hoping to add one more tic to her already 300+ year. None of us were optimistic. Steve and I decided we would just spend an hour birding the impoundment, which, even on a bad day, still beats birding most anywhere else. Liz decided she wasn’t giving up on the Whimbrels. Steve and I went on to find a Sanderling and some Avocets, leaving Liz behind. Then Liz called–she found them! Liz is, indeed, persistent. I mean, would you think to look at a pile of Mallards a half mile away in windy conditions?  Because that’s where she found the Whimbrels were hiding. 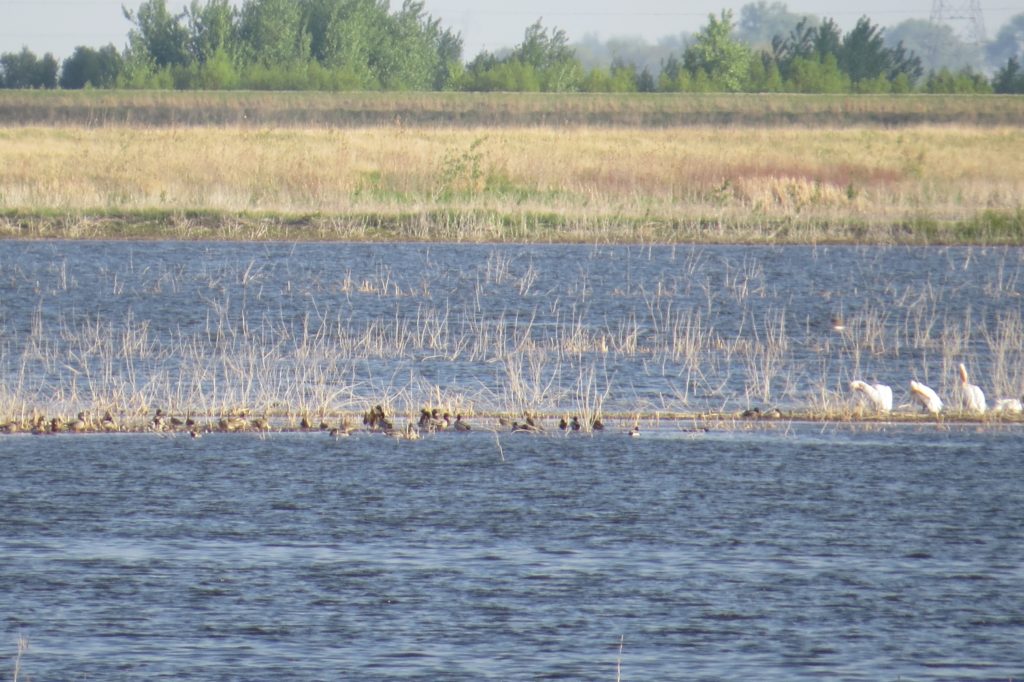 The views through the scopes shaking in the wind were tenuous but definitive enough to know what we were looking at. Liz was, appropriately, super pumped by resurrecting these birds and saving the day for all of us. Also, appropriately, she insisted we selfie with her to commemorate this great birding memory. Thanks, Liz, for digging this one out and changing the day’s narrative! 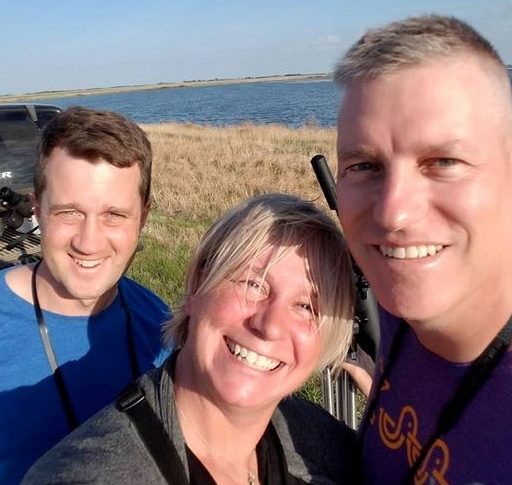 I was itching for a better look at these Whimbrels, so Steve and I headed to the road that bordered the basin on the east. Finally I got the look I was hoping for–seeing that tell-tale bill. It left me wanting more, but it was enough for now. Maybe someday I’d do better… 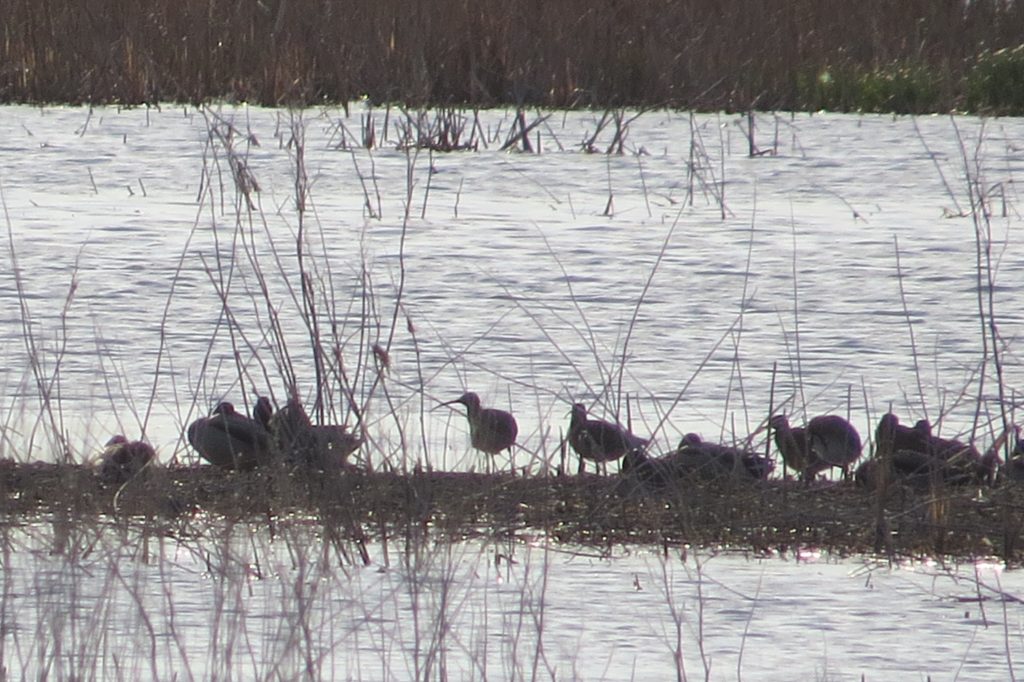 This brings us to this Memorial Day weekend where the family and I made a quick overnight trip to Duluth. Red-throated Loon is annual in Minnesota in both the late fall and spring on Lake Superior during migration.  For whatever reason, I still haven’t made this bird a priority. Five years into my birding career, and I still hadn’t seen one. I decided to change that by going on this trip. RTLOs had been reported in good numbers off Park Point in Duluth the past few weeks.  Memorial Day is one of the best times to look for them. We didn’t waste any time in Duluth, hitting the 12th St. beach access on Park Point immediately upon arriving in town. As the family played on the sandy beach and enjoyed the brisk 55-degree weather (mid 90s back home!), I scanned for this holdout to my life list. Nothing at 12 St., so we continued a few miles east down the Point to the beach house.  There was a lot of chop and sun glare, but I eventually latched onto a trio of these constantly diving Loons. Seeing these Loons, in breeding plumage no less, felt good even if the photo leaves a lot to be desired. 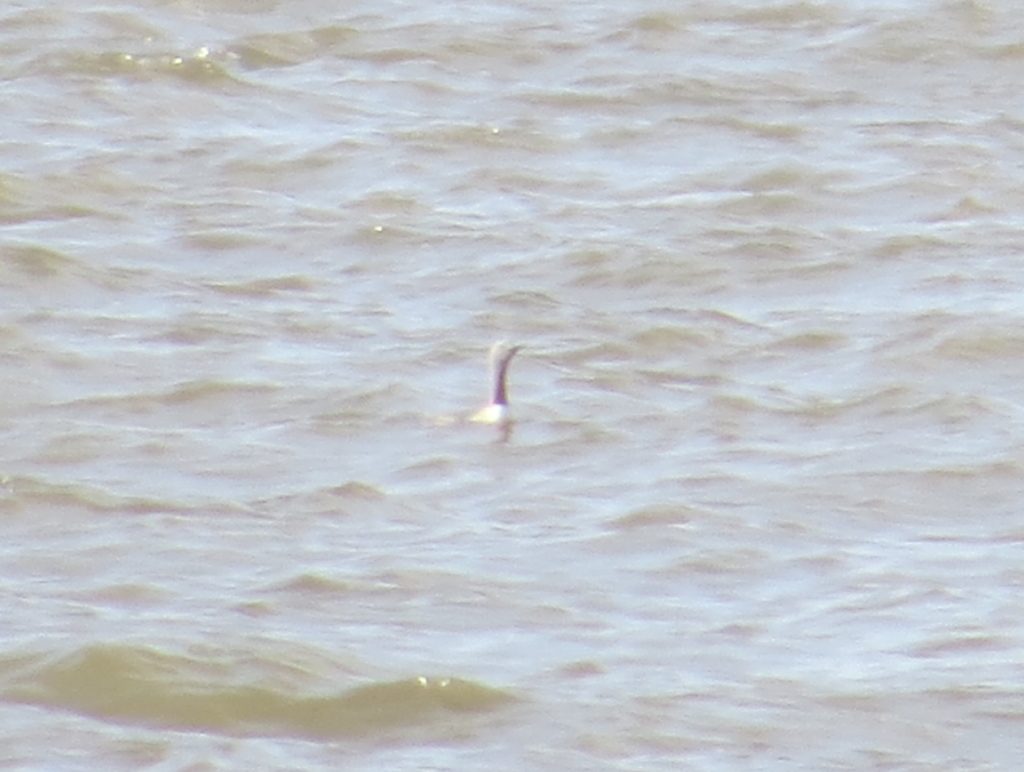 Since the main target of the trip was achieved, there was nothing left to do but have a relaxing time with the family. Of course, I’d be up and at ’em the next morning well before the family was awake. I decided to try for more/better visuals of the Loons. I had no luck with that this morning. What I lacked in the Loon-finding skills, I made up for in finding Duluth birding pal, John Richardson. It’s always good to see John. Not only is he a fun guy, but he is one skilled birder. He didn’t find a Red-throated Loon either. Instead, he found something just as good or even better: 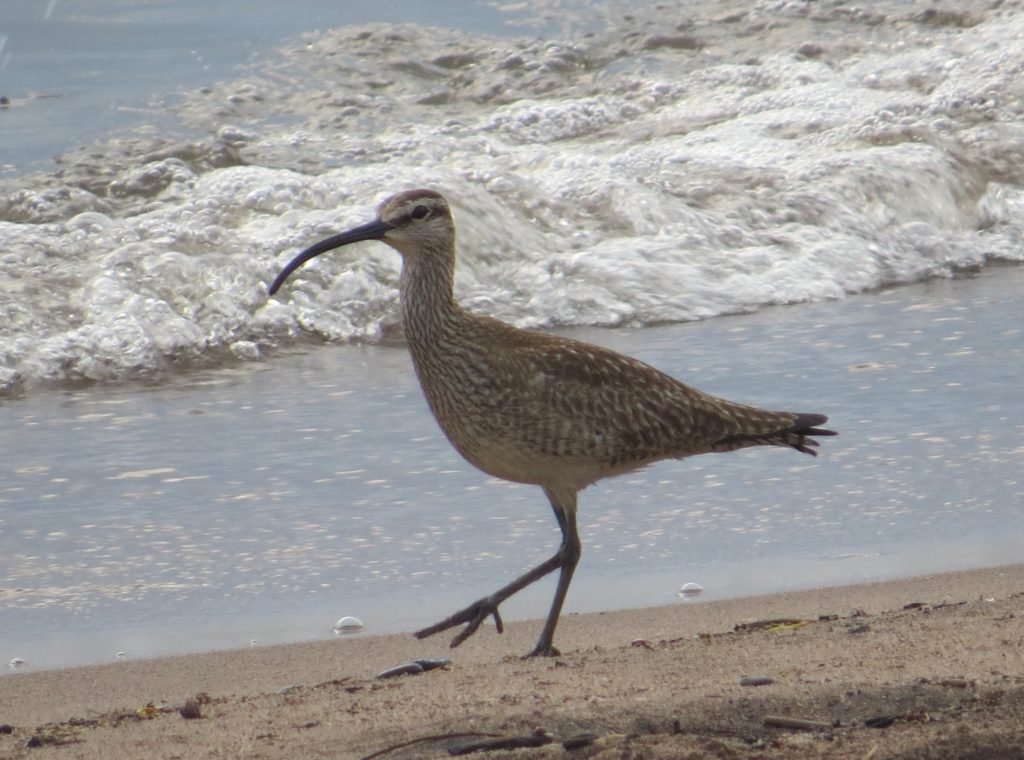 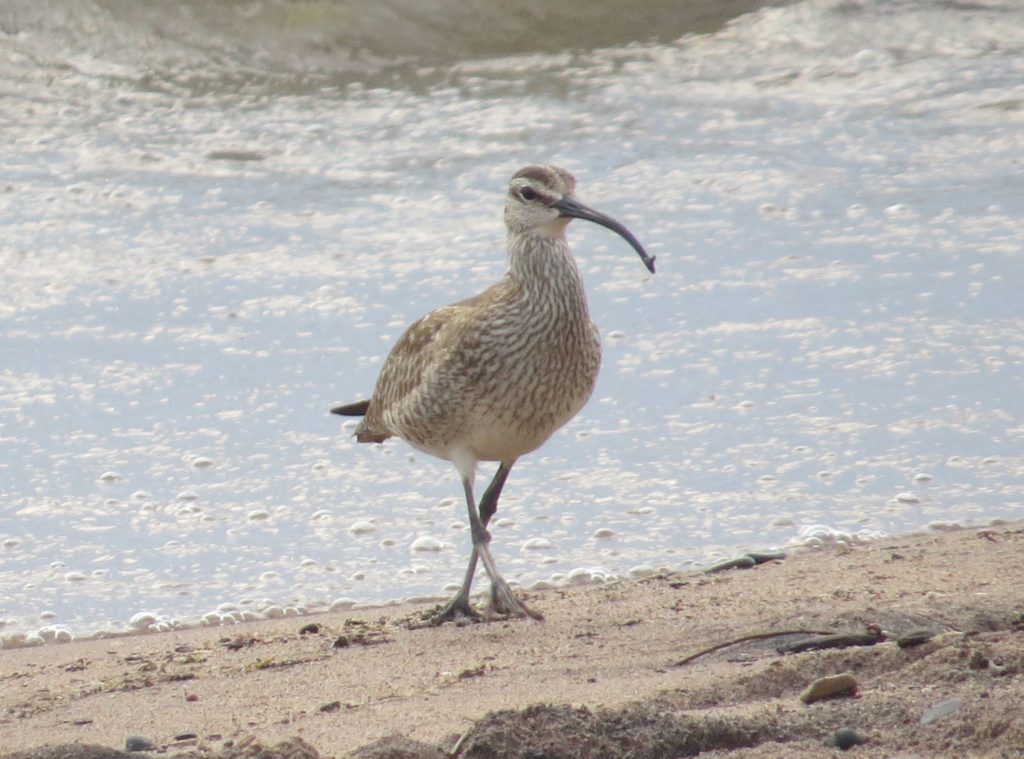 John and I spent the better part of an hour trying to relocate this single Whimbrel John had first found near the dune bridge at Park Point. It was time and effort well spent. Such a great-looking shorebird! Truly, not many other shorebirds excite birders as much as this one. It was as equal of a highlight as the RTLO, which I am now expecting to get crushing looks of any day at this rate.

I’m putting off the other major trip reports again. Next post will be about the local birding scene.  It’s been off the charts.