Ask any serious Minnesota birder where he or she was in June of 2017, and you will get one common response: the North Ottawa Impoundment in Grant County.  While not exactly new to hosting good and rare birds, North Ottawa outdid itself this year.  Or more accurately, an army of skilled birders outdid themselves as they descended on the Impoundment in waves and created a bonafide, honest-to-goodness Patagonia Picnic Table Effect.  That term is sometimes used pretty loosely, but this was the real deal–a cascade of Accidentals, Casuals, and Rare-Regulars so intense that it threatened to rename the very phenomenon itself.  Below is the timeline of the major birding events, including my multiple trips with Steve Gardner to the site in June.  Even though this info is old news to Minnesota birders, I think the end of this post will hold a nice surprise for all.

Shawn Conrad and Becca Engdahl separately report finding a Glossy Ibis, an accidental species that would be a lifer for me.

Undoubtedly following up on the Glossy Ibis reports, Minnesota Big Year birder Liz Harper helps her own cause by discovering a Little Blue Heron, a rare-regular species which would be a state bird for me.

Among the masses of birders now swarming the Impoundment, Gerry Hoekstra sends MN birders into a complete frenzy, including yours truly, when he finds a Snowy Plover, a casual species that would be a lifer for me.

Steve and I go to North Ottawa.  Any one of the three aforementioned birds would have justified the trip.  Three in one spot was just ridiculous.  We were hoping for at least one of these goodies.  Fortunately I didn’t have to wait long to get that wish.  I got the Little Blue Heron as a flyover almost right away. Unfortunately Steve missed it at that time but got it later in the day. 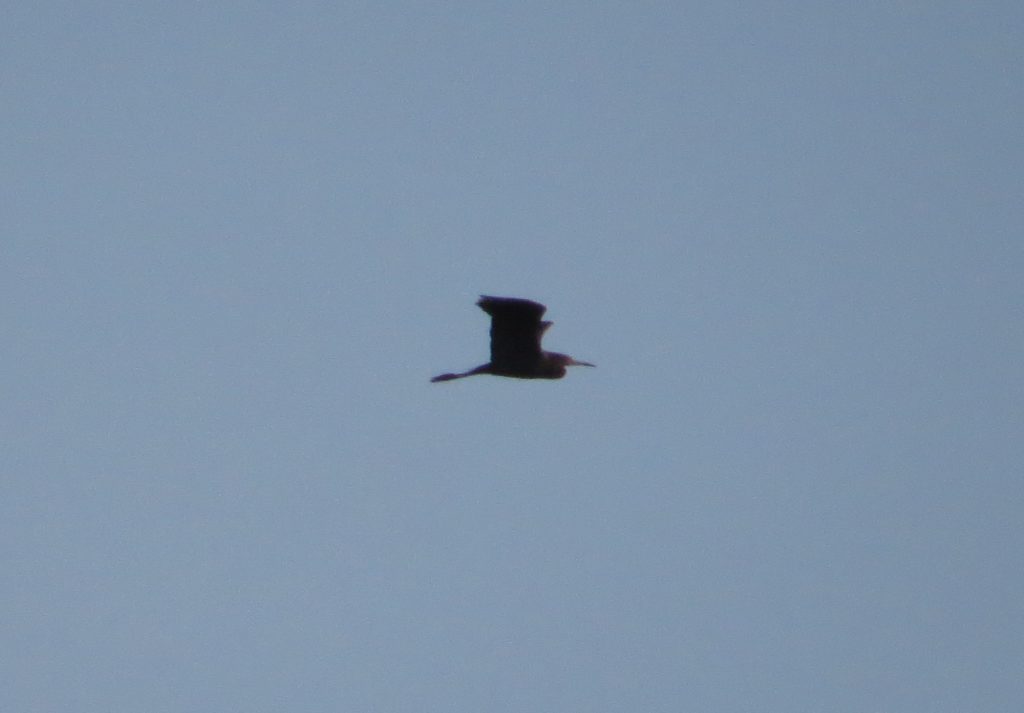 We tried unsuccessfully for the Snowy Plover but had no luck.  Considering there were over a dozen birders out looking and no one was turning it up, it was safe to say that it was gone. We did, however, see the Glossy Ibis thanks to Wayne Perala, local birding guru who knew the bird and its habits so well that he told us where to look. And almost on cue, the bird flew up out of the cattails right by Wayne as he said, “There’s your Ibis.” This bird was super cooperative giving us great looks in perfect light.  It was a life bird for me but just a state bird for Steve. 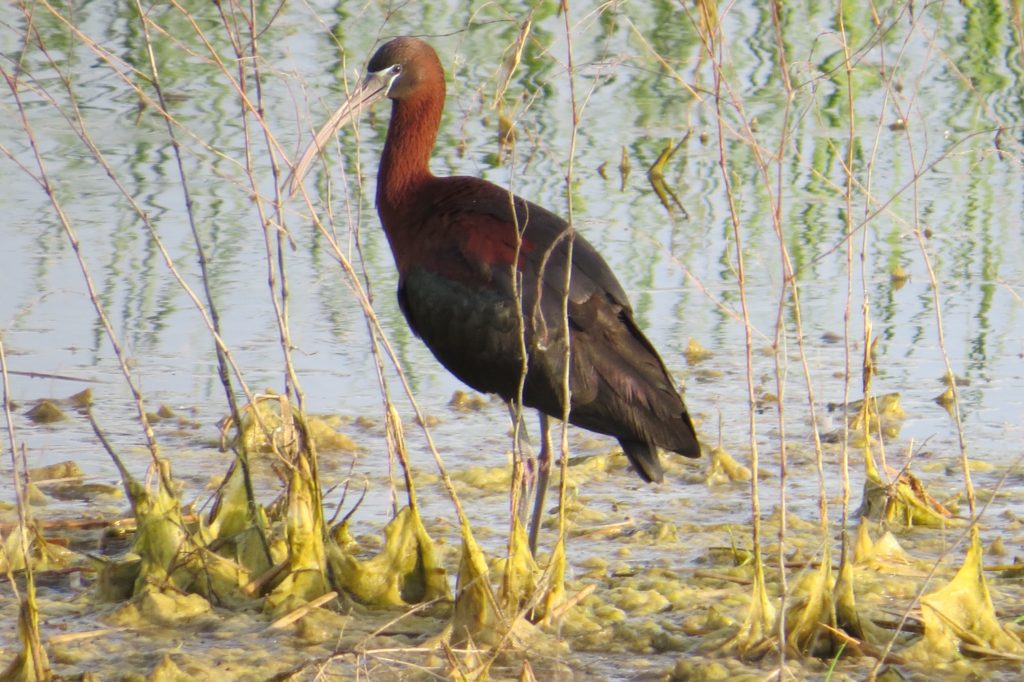 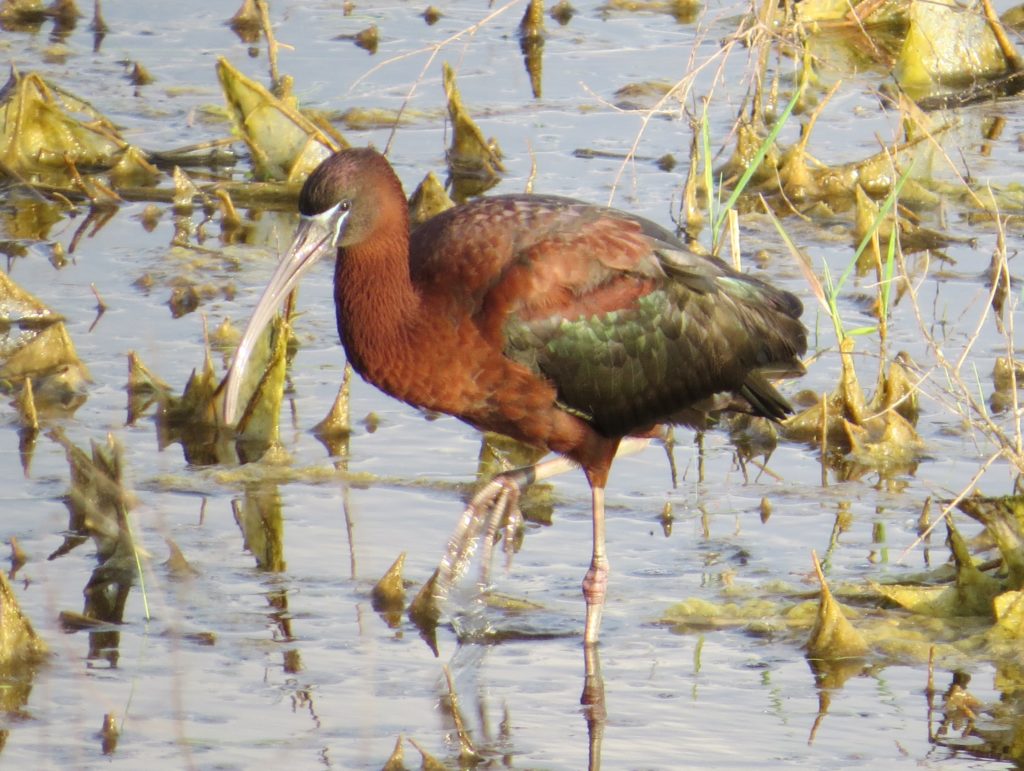 Steve and I were pretty thrilled with going 2/3 on our targets. In addition to these birds, we also nabbed some nice birds that we don’t get to see too often, like this Snowy Egret. 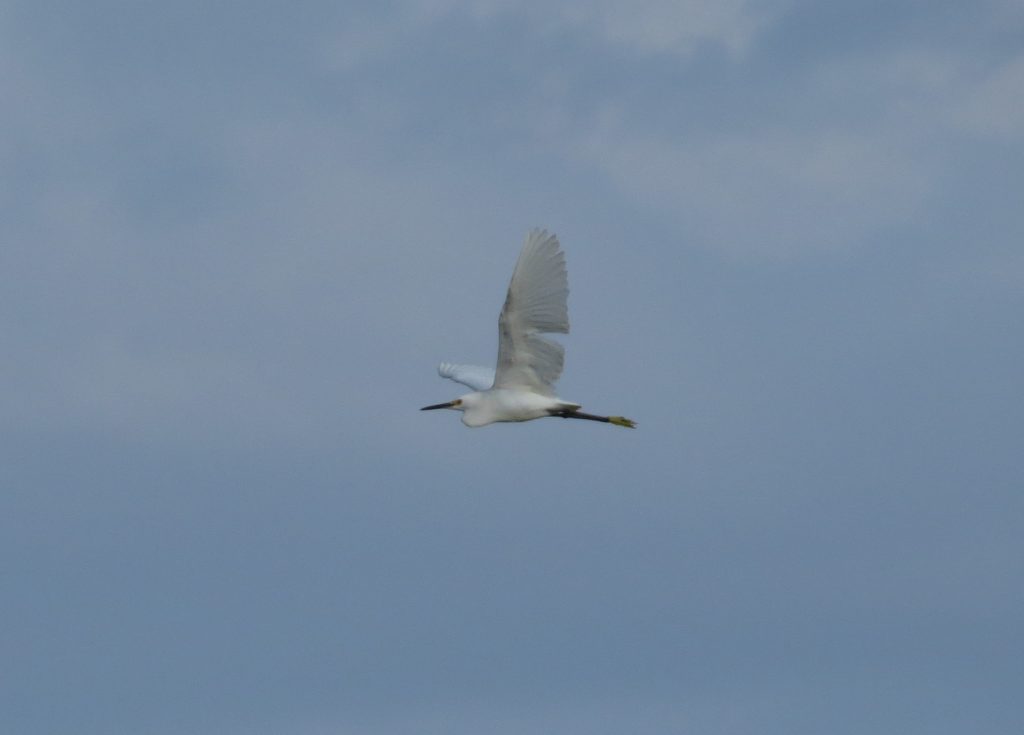 Western Kingbird never goes unappreciated in Minnesota.  We were lucky to see this one. 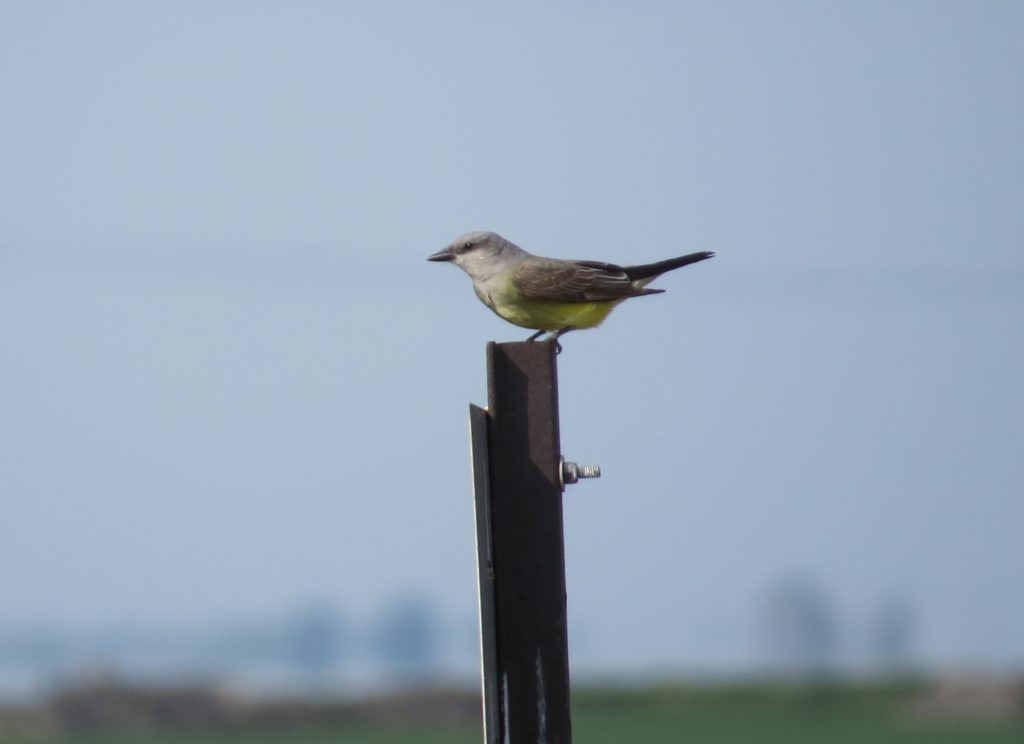 And who does not love seeing an Upland Sandpiper, especially one so crushable? 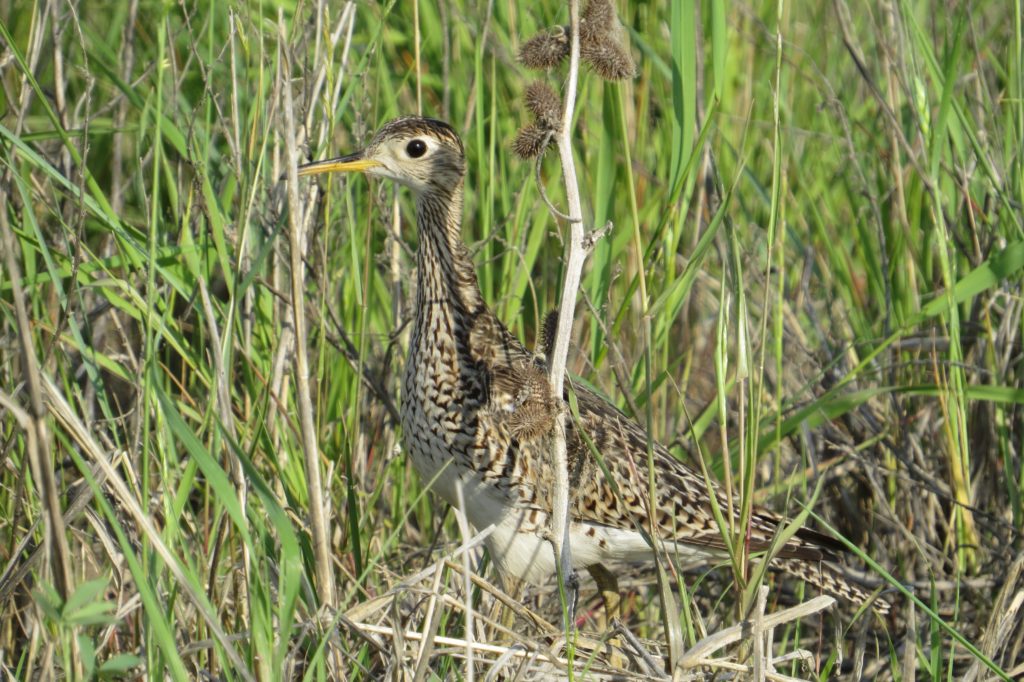 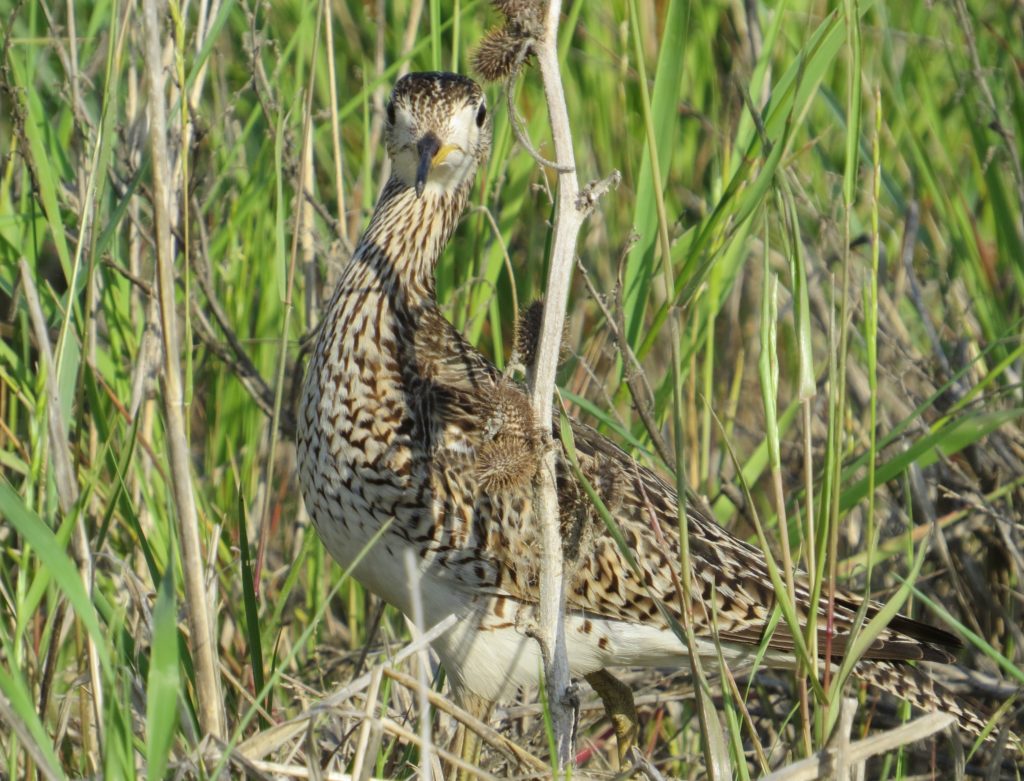 Steve and I felt pretty darn good about our trip and our nice haul of birds.  We were completely satisfied, until….

Wayne Perala (remember nice guy, Wayne, from the Ibis story?) sent another shock wave through the Minnesota birding community by posting incredible pics of a King Rail, another accidental species that would be a lifer for me.  Unfortunately timing was bad for me as I was getting ready to go on that Madeline Island trip that was highlighted by the last post.  Indeed I had to suffer through pics and reports of many people adding the most recent North Ottawa mega to their lists.

Finally back from that Wisconsin vacation, Steve and I sneak up to the Impoundment in the evening.  In the week since the Rail was discovered, other birders discovered there were two King Rails!  Despite now having double the chance to see this lifer, our Rail search was a bust.  The wind was raging and we were searching in slightly the wrong spot. We also tried searching for a lifer Nelson’s Sparrow reported by Becca Engdahl, but nothing likes to be out in the wind.  Except Western Grebes, they don’t care. 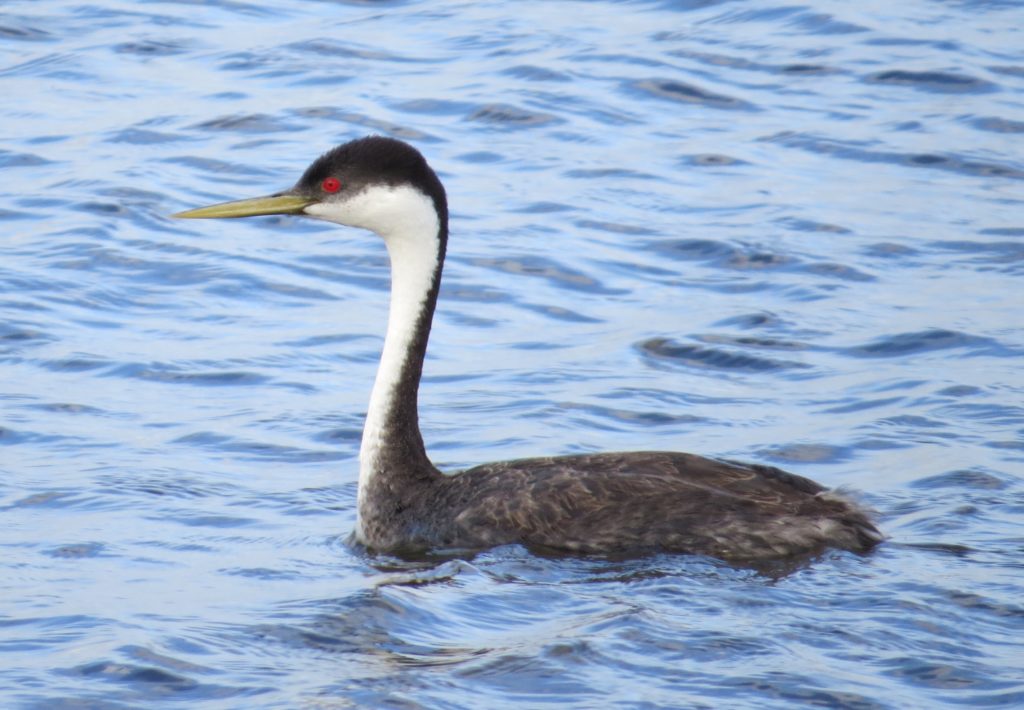 Steve and I did, however, see another casual species that was also discovered during this historic period of MN birding which I have failed to disclose in the timeline.  A pair of Black-necked Stilts had set up shop in one of the shallow pools of the Impoundment. Considering I already had Black-necked Stilts for Grant County from several years ago and that Steve had just gotten this state bird recently, we just weren’t too fired up about it, especially after our double dip.

With a renewed sense of optimism freshened up by continuing reports of the Rail pair, Steve and I headed back to Grant County for the third time in a month.  This time we arrived at the crack of dawn on gloriously still day…in the right spot. Success. 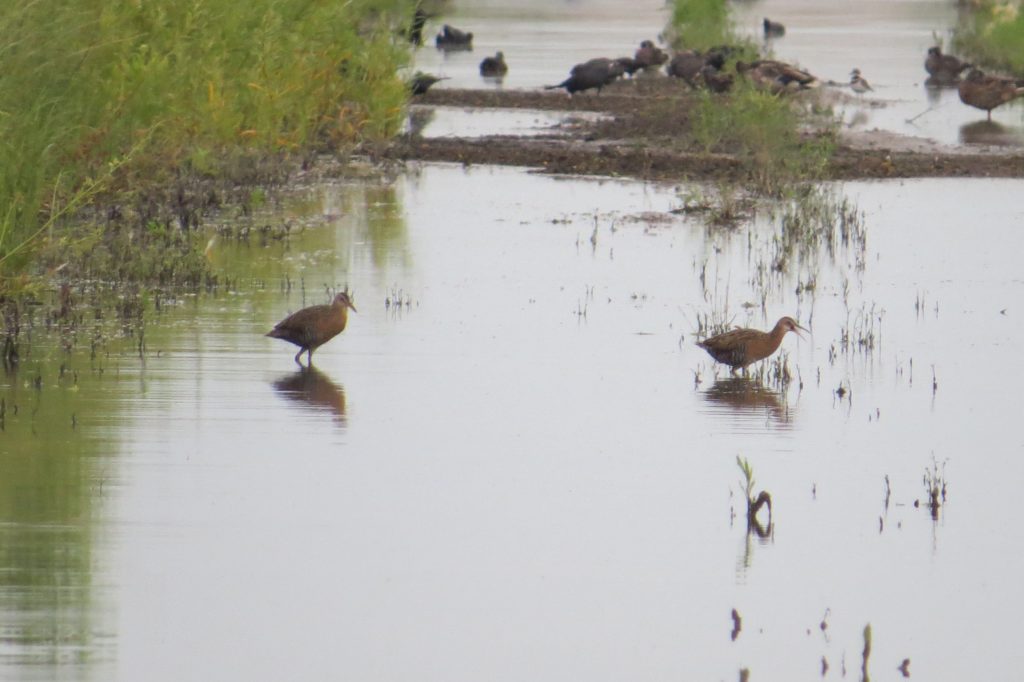 Look at the size of these things compared to the Mallards in the background.  No wonder it’s the King of the Rails. 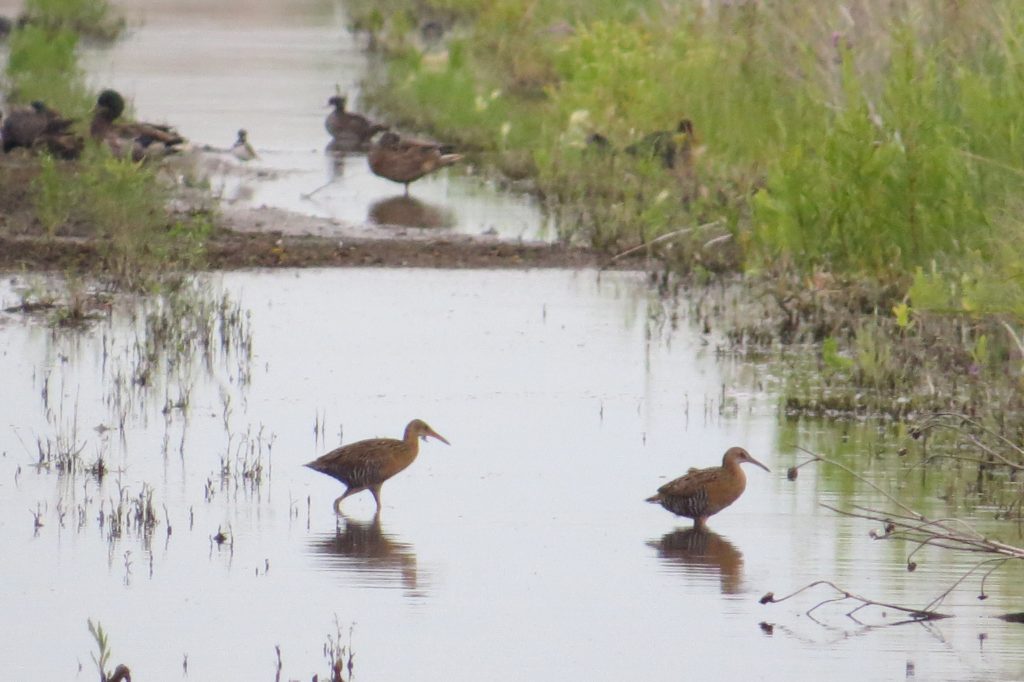 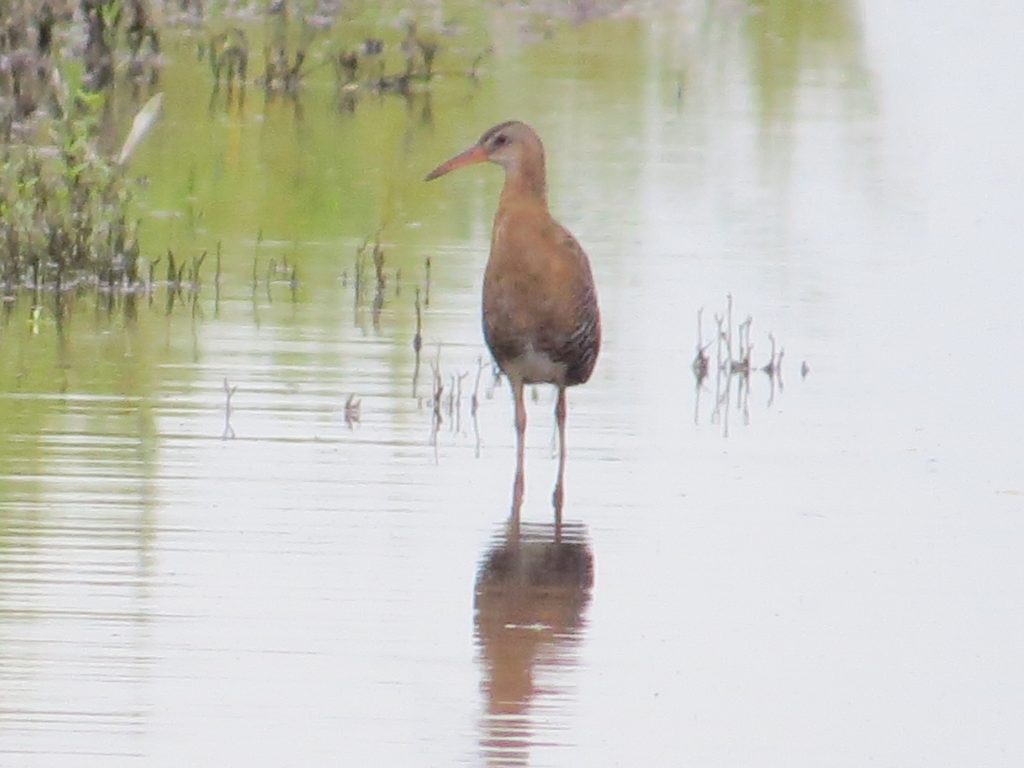 Birding is a roller coaster of emotions, and Steve and I were back on top after this sighting.  Steve suggested we try for those Nelson’s Sparrows again.  Despite our good fortune of the morning, I was skeptical we would find the Sparrows.  But not looking certainly guarantees that outcome. So we walked the dike berm that we had a week ago.  This time it definitely felt more Sparrowy–no wind, early morning, etc.  We played the tape and didn’t get a response.  Then a couple minutes later, I heard the recording, or what I thought was the recording, again.  I asked Steve if he had left his phone app on.  When he replied that he hadn’t we knew were hearing the real deal! We continued to work the area, and eventually we saw two Nelson’s Sparrows! 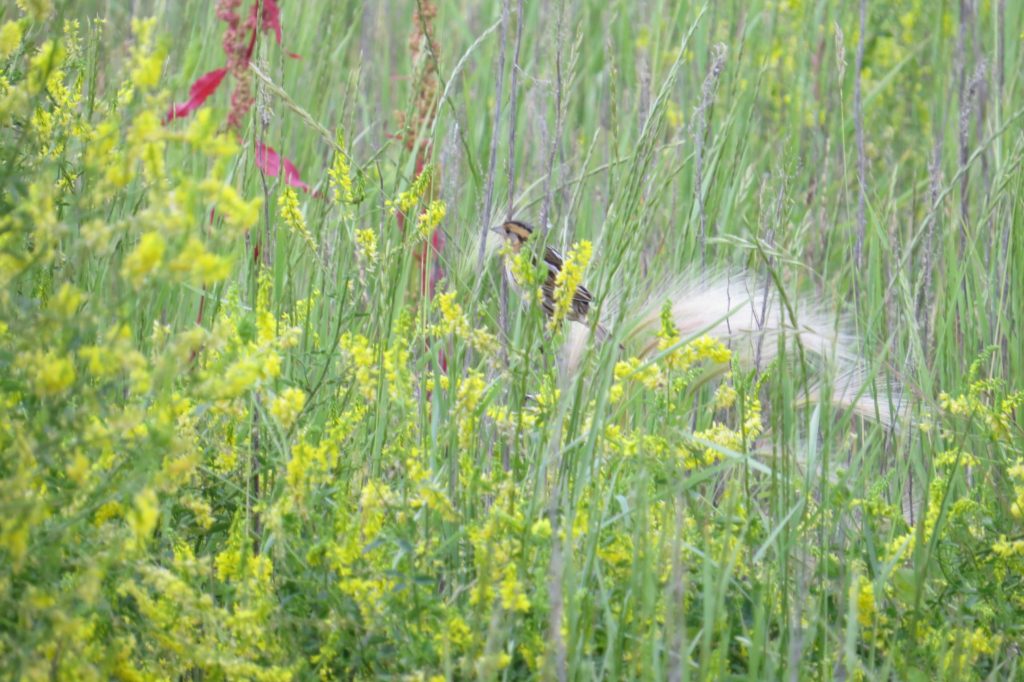 With some pishing we were able to get them to pop up for some great looks at these skulkers. 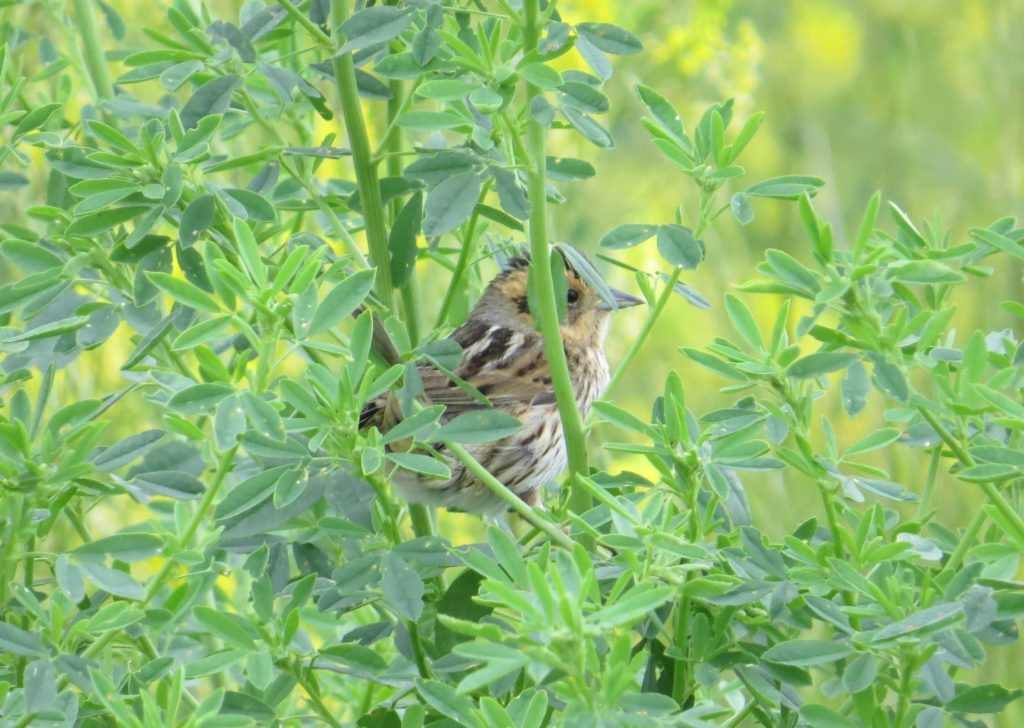 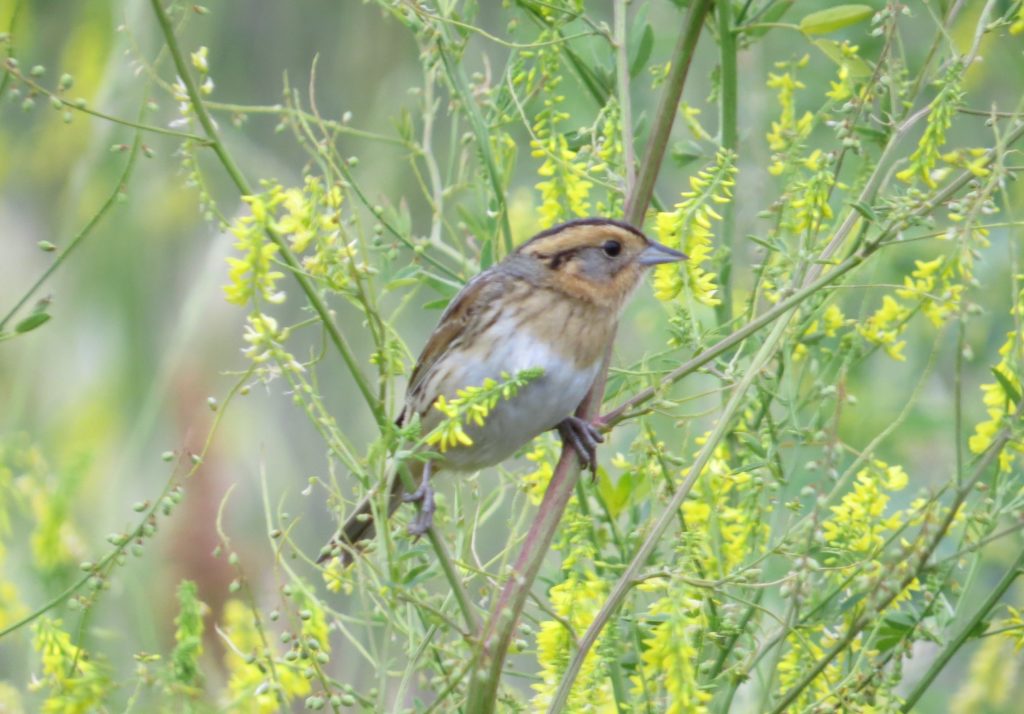 Steve and I followed these birds around for a bit, thoroughly soaking up the experience.  I don’t think either of us ever expected to lifer on this bird with such good looks.  We certainly didn’t expect to get this lifer in Grant County.  This nighttime singer is often a heard-only bird that people trek to middle of nowhere (McGregor) to find in the middle of the night.  We were stupefied.  Talking it over on the ride home, we concluded that the Nelson’s Sparrow lifer experience topped the King Rails even though the Sparrow is a summer resident in our state.  More than once I have been surprised by how much of an impact a Sparrow lifer has on me.  A huge thanks goes out to Becca Engdahl for her find and her tips on locating it!

The reports out of North Ottawa definitely dried up in July.  That was okay with me because I, along with many others, were spoiled rotten by the place.  Additionally, I was okay with not having to run up to Grant County again because I had been working hard on achieving a birding goal much closer to home, a goal that has since been achieved and will be the highlight of the next post.

4 thoughts on “Pounding the Lifers at North Ottawa Impoundment”