So like your favorite show, I’ve left you with a cliffhanger in that last post that alluded to a tantalizing lifer and I made you wait for the next season (literally) to get some resolution.  Turns out that a busy career, life with kids and their activities, and a move(!) have hindered the blogging efforts even if the birding has still raged on in spite of the chaos. There have been trips to Arizona, Wisconsin, lifer trips here in Minnesota, and much more. It’s been a wild ride, but things are finally a little more conducive to getting caught up, so you can expect a mass release of posts and start binge-reading ABWCH.

We left off with a birding excursion to a Black Spruce bog back in the homeland of northern Minnesota with birding friends Julie Grahn and John Richardson in late March.  Winter still had a somewhat icy grip on the northwoods, but there was a fire of birding excitement burning inside as John, Julie, and I pursued Julie’s latest great find–an American Three-toed Woodpecker.  While this species may be easier to find out west in the mountains, this woodpecker is incredibly rare for Minnesota.  In fact, in all the years that I have been birding there has not been a chaseable one until this past spring when Julie found FOUR of them in three different locations!  Julie’s fame grew as throngs of birders trekked up north to see a pair of these elusive Woodpeckers at one particular spot.  I was somewhat late to the party, actually, and had to wait for an opportune time to sneak away.  So when the kids had their spring break, I took them on a trip to see Grandma who graciously watched them while I went hunting for this lifer.

Back to that same day that we saw the Spruce Grouse, John, Julie, and I walked back and forth along a two-mile stretch of road through a Black Spuce bog in the hopes of hearing/seeing this ghost of a Woodpecker.  After a couple hours we finally heard drumming, and we all raced ahead to track it down.  It seems like heresy to say this, but I was dejected to be looking at a Black-backed Woodpecker. 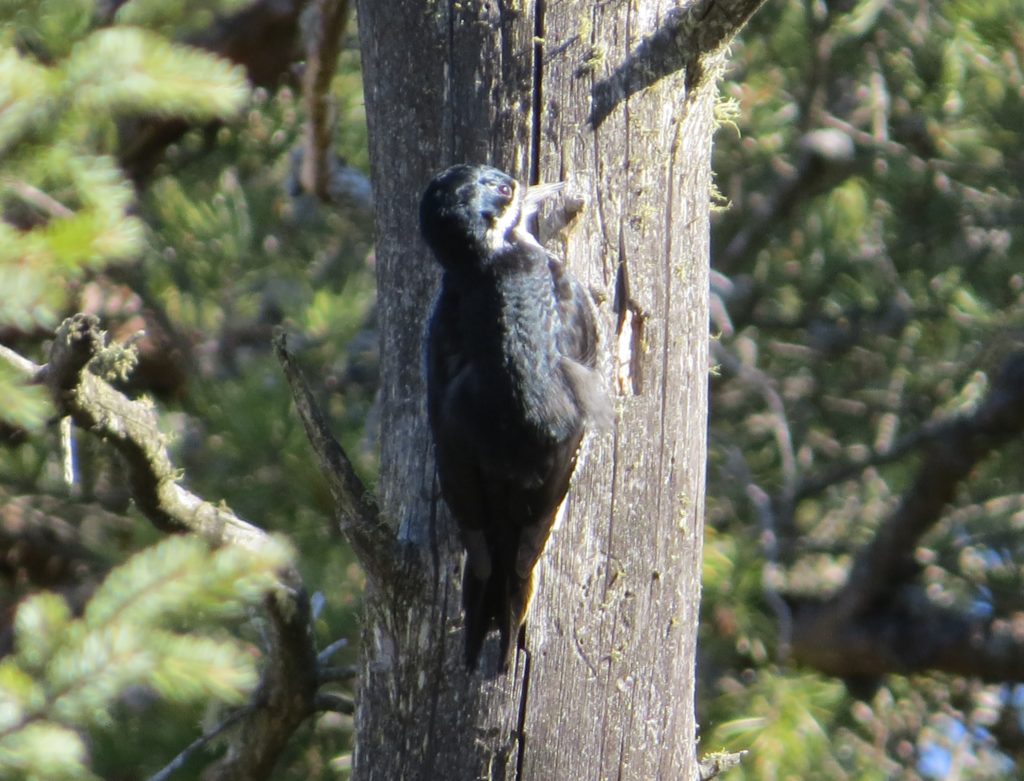 We carried on with our walk that had us traversing the same stretch of road several times.  Then we heard drumming quite a ways from the Black-backed and knew it was a different bird.  We repeated the drill of tracking down the source.  Only this time it was different.  John was the first one to get eyes on it and announced it was the American Three-toed Woodpecker and the male at that! 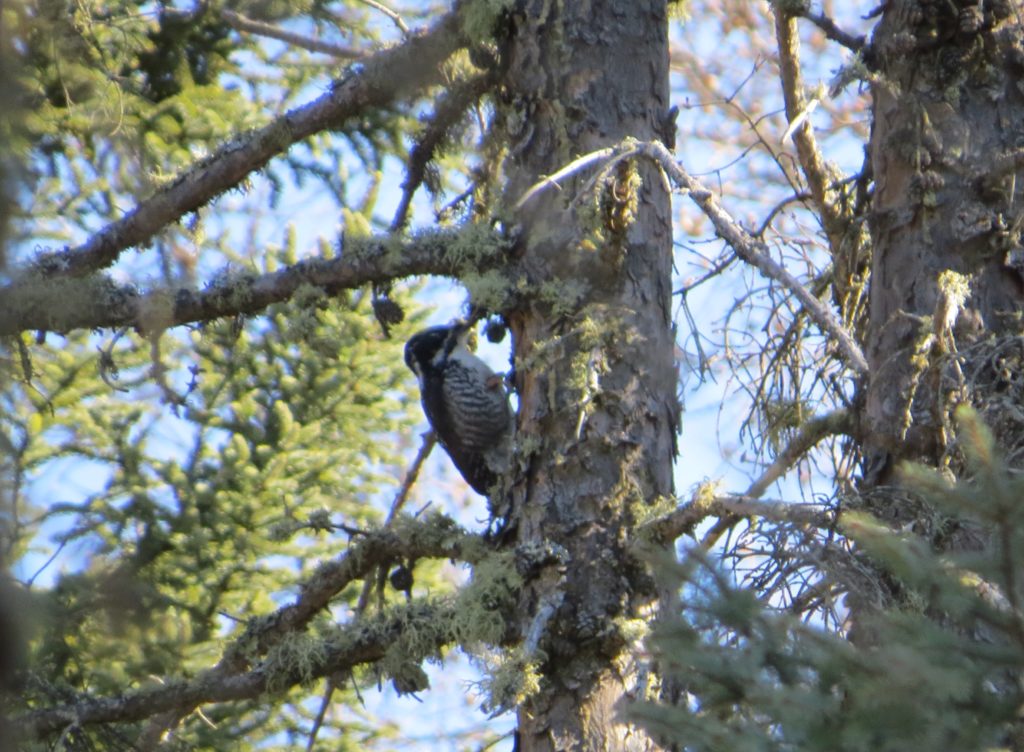 It was a huge lifer for me–there are only a handful of regular birds in Minnesota I can still add to my life list, and the icing on the cake was that this was a hometown bird.  It really doesn’t get better than that, and I spent a lot of time soaking up the experience and taking lots of photos. 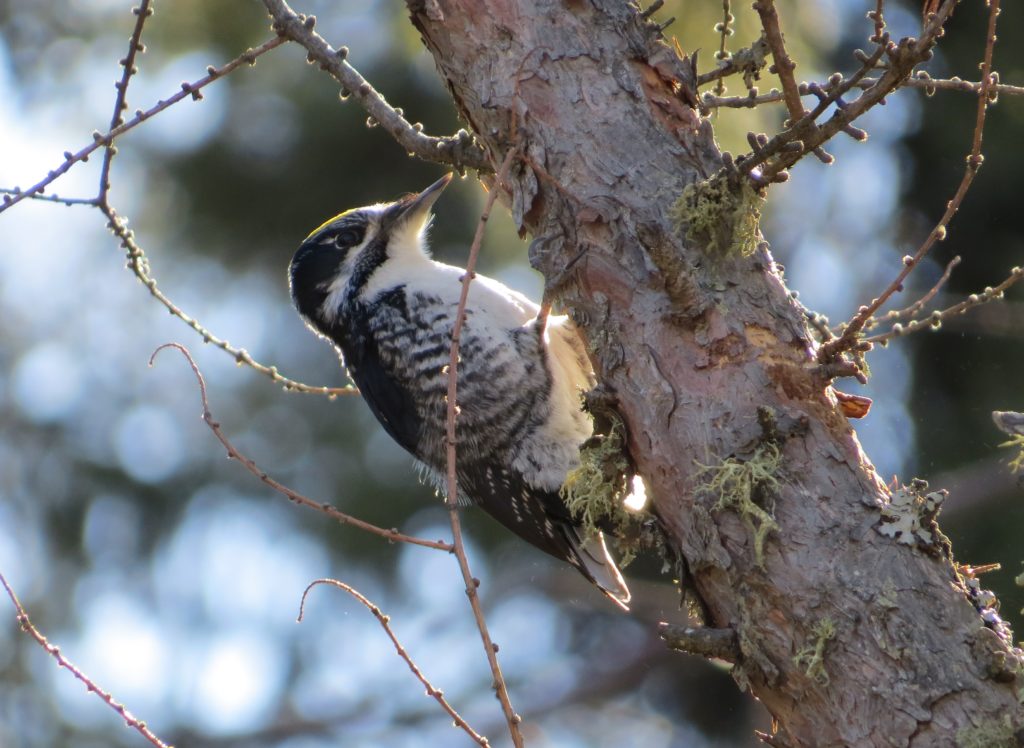 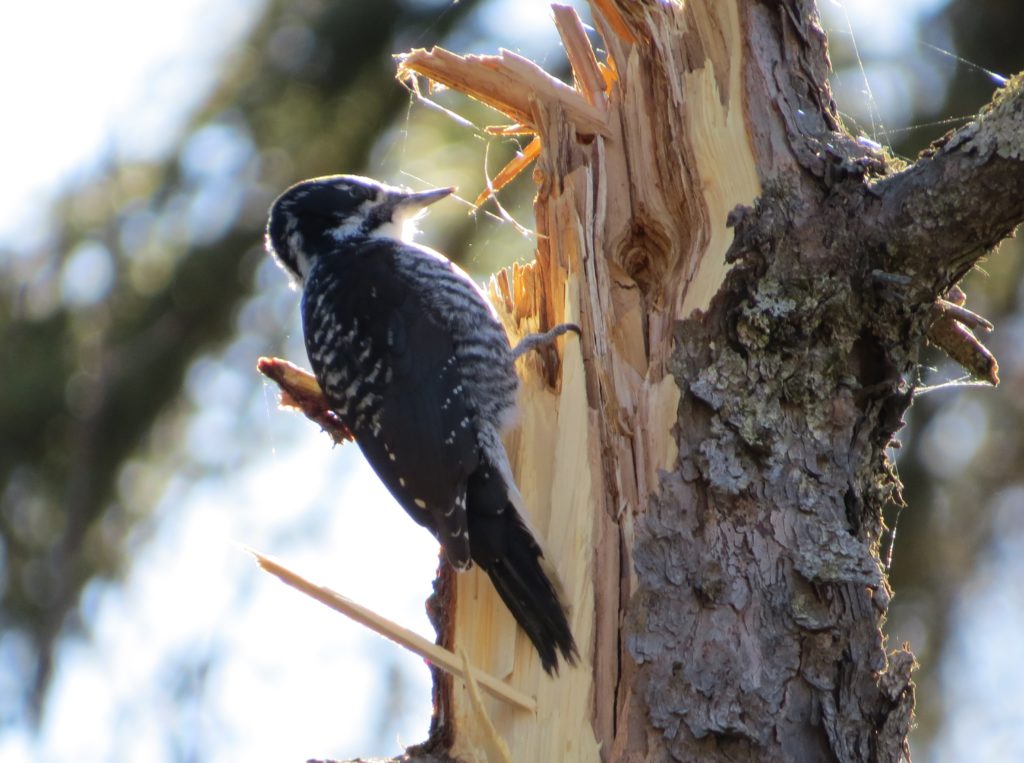 At one point this Woodpecker flew down and worked the bark along a downed tree.  This bird was oblivious to my presence and let me approach within 5 feet as it frantically flaked bark to look for insects. 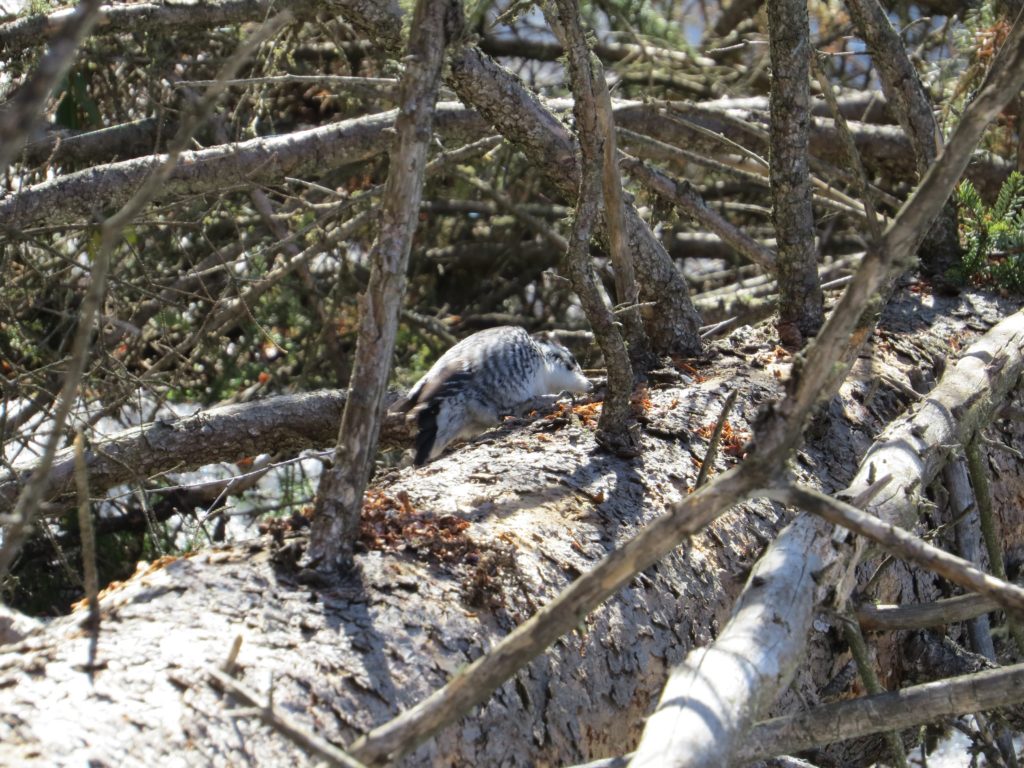 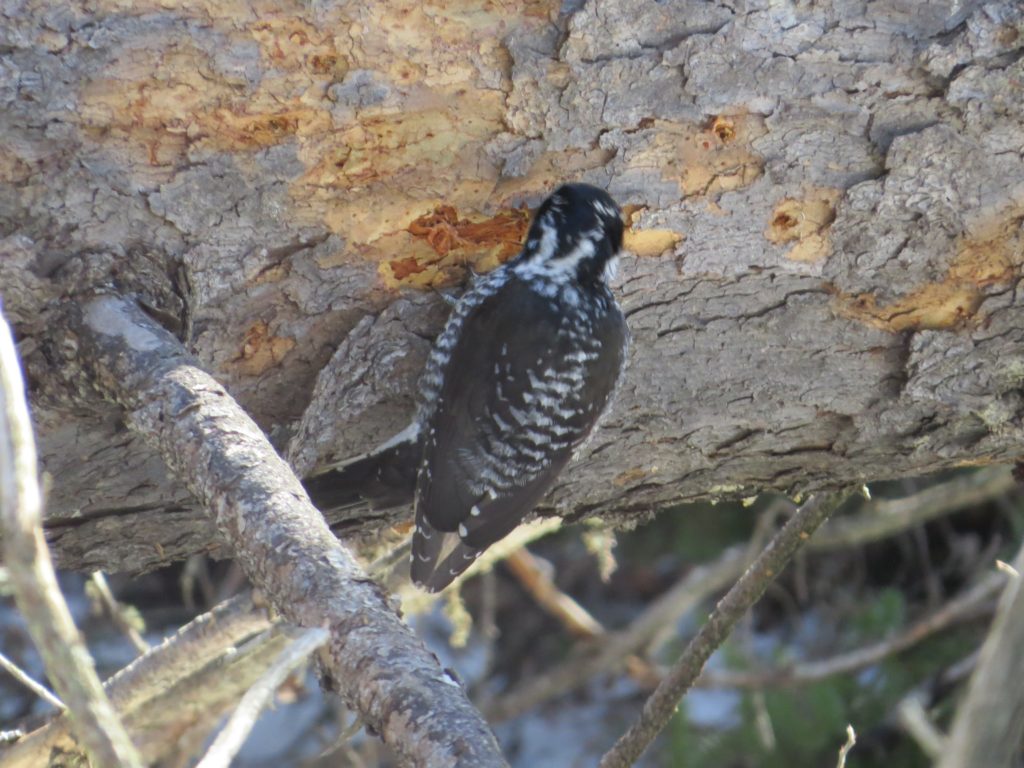 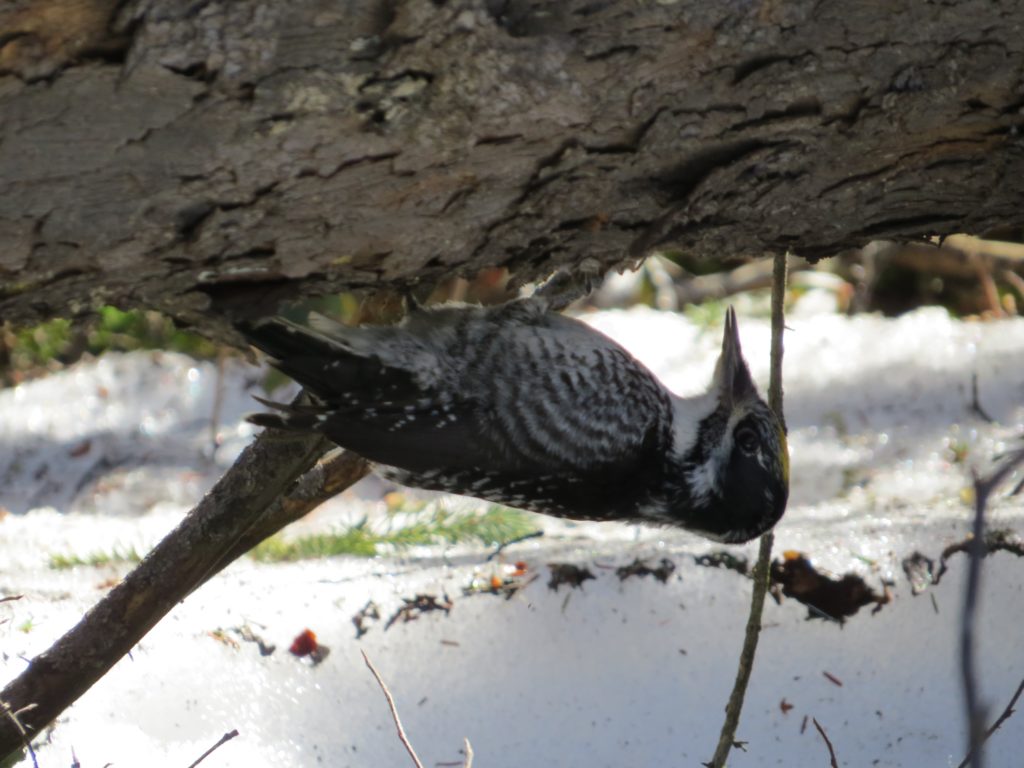 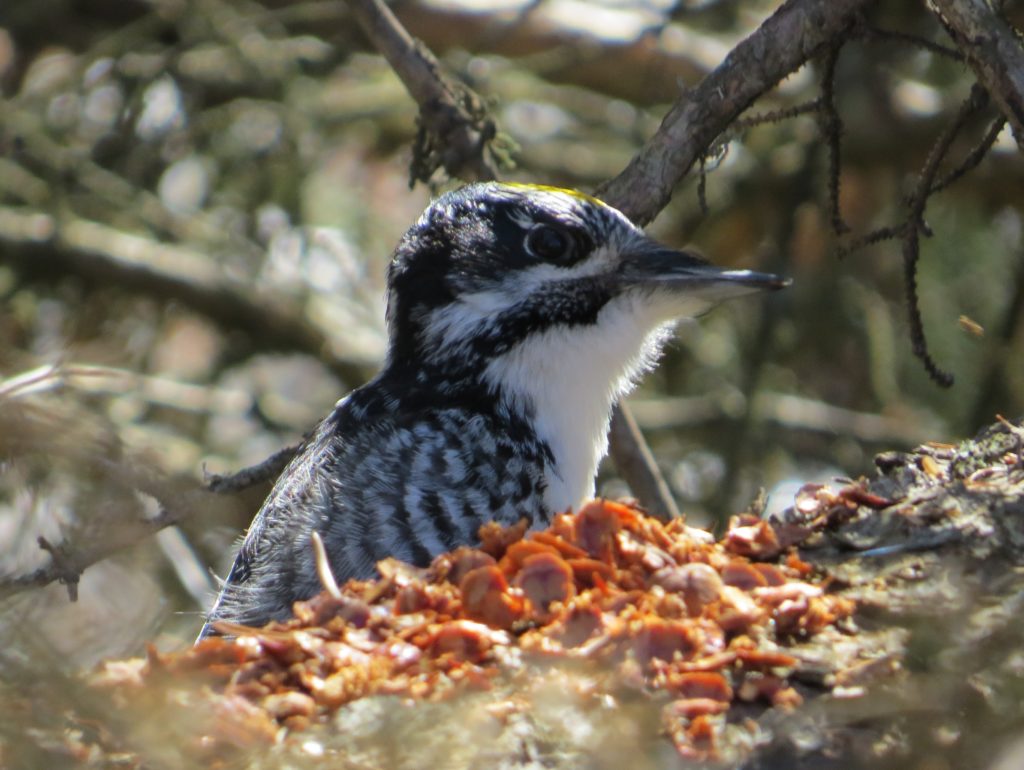 It was a beautiful day to be birding back home and enjoying a long-awaited lifer.  John had gotten his fill long ago and left. Julie was quite patient as I spent an inordinate amount of time photographing this incredibly accommodating bird. 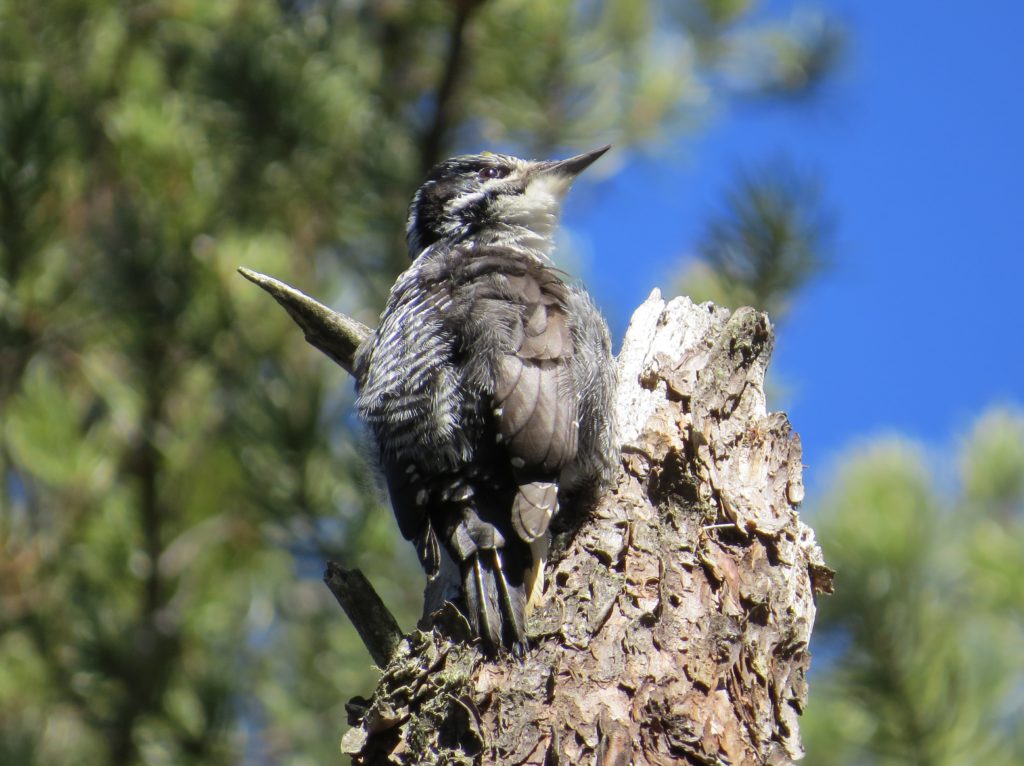 I did, finally, pry myself away and Julie and I wrapped up our birding for the day.  However, I found myself back on this road the next morning because the allure of these Woodpeckers and the Spruce Grouse was just too strong.  That second morning I decided to drive the stretch of road first with the windows down.  Unlike the day before, the action started almost immediately.  I heard the unmistakable rattle call of TWO Black-backed Woodpeckers that seemed to be chasing each other around in some sort of courtship dance. I got lucky enough to catch them on the same tree together. 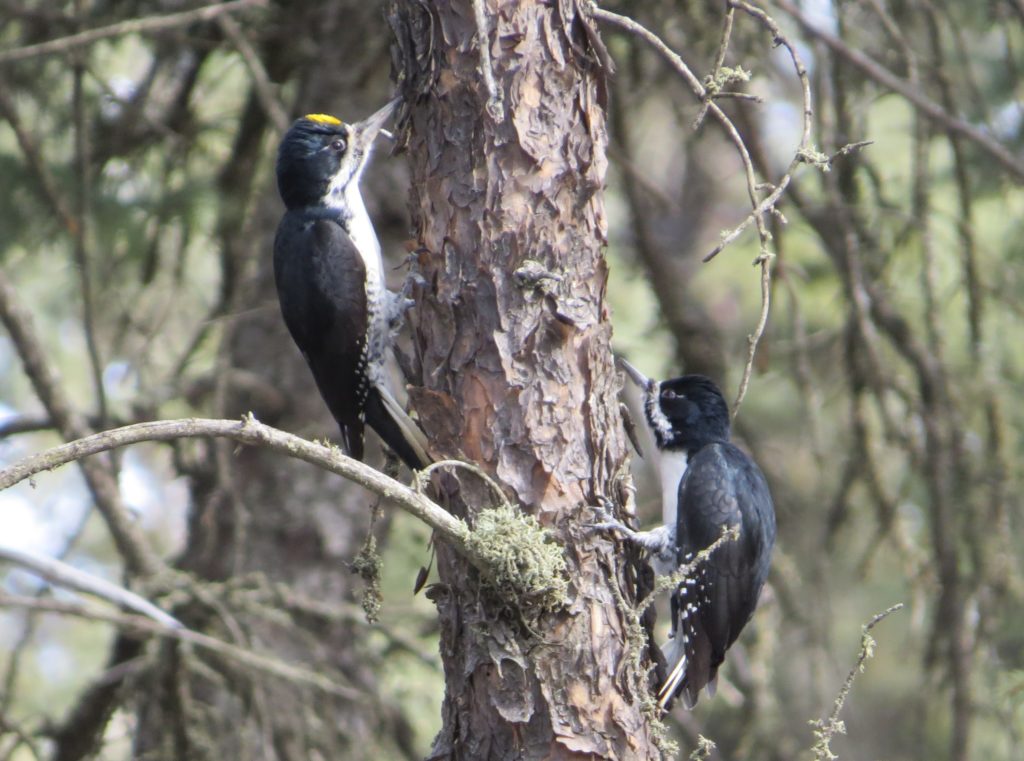 Then all craziness broke loose (as if it hadn’t already). There were now four Woodpeckers chasing each other around. As I tried to make sense of it all, another unexpected sighting happened–Sparky Stensaas came bursting out of the woods with a large camera and tripod in hot pursuit of this action.  All of this action was just nuts. I started photographing two Woodpeckers on a dead snag and realized I had the male Black-backed and male Three-toed together on the same tree! 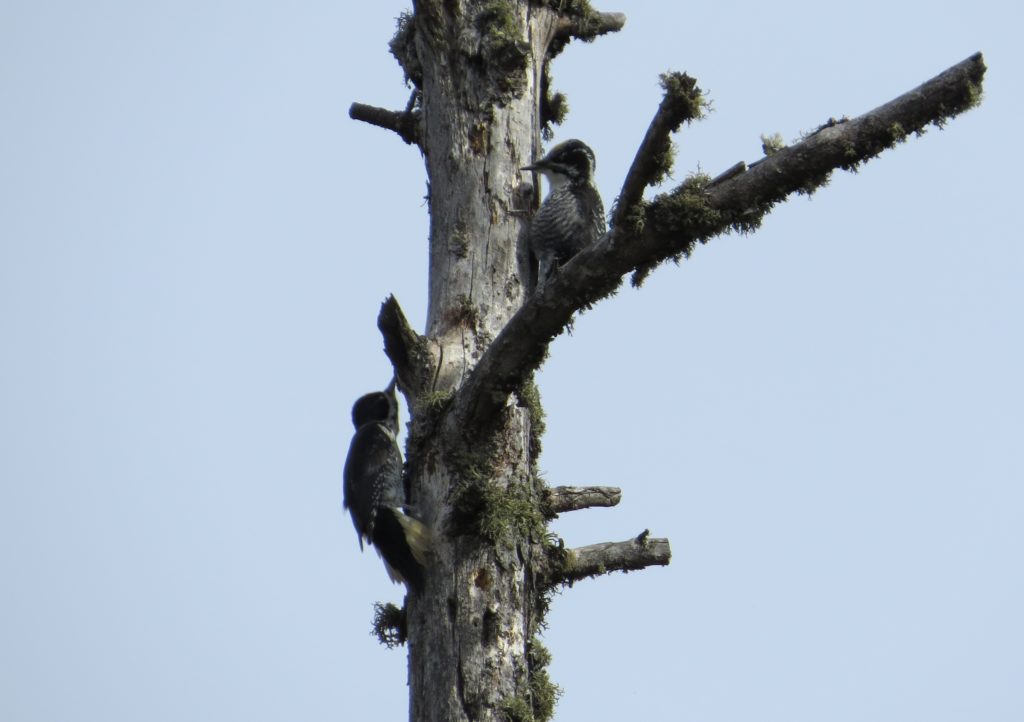 They appeared to be in some sort of dispute over territory which was a fascinating development for us onlookers.  Meanwhile, the females of these respective species kept each other company on their own tree, though I did not photograph them.  I was too busy watching the males who were vying for superiority. 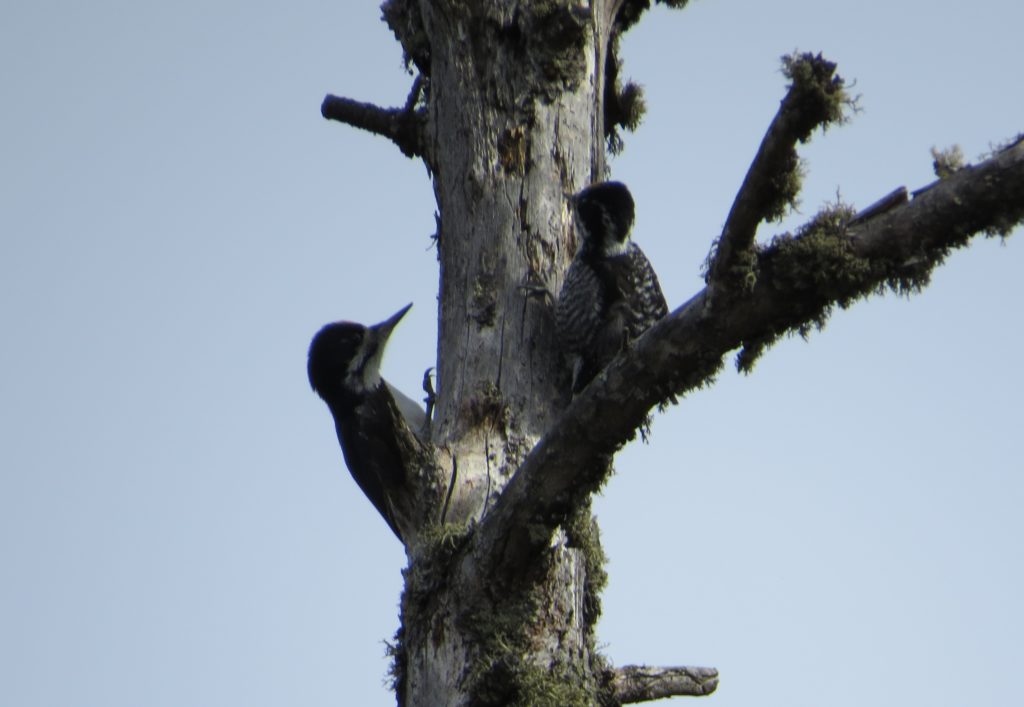 And in the end, one Woodpecker clearly won out. 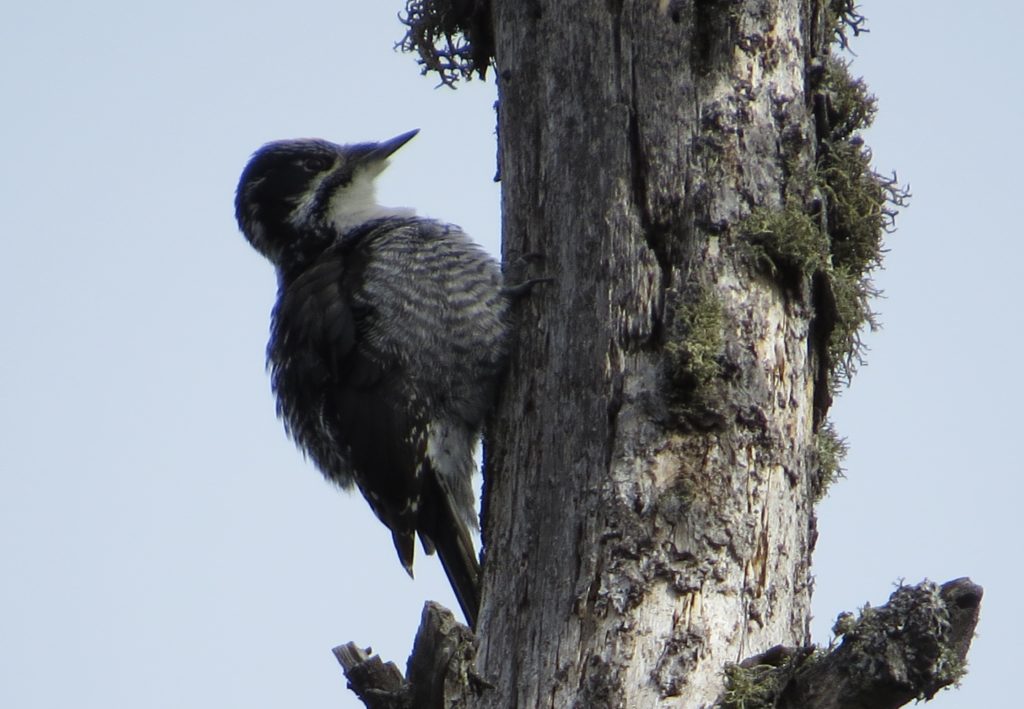 Eventually, the Woodpeckers (and Sparky) dispersed into the woods and the excitement was over.  Later on, Julie Grahn and Dee Kuder showed up, and along with Sparky we all enjoyed the Spruce Grouse show that was highlighted in the last post. A huge thank you goes out to Julie Grahn for finding and reporting these birds and assisting me in finding them.  It was an incredible experience–I couldn’t have asked for a better way to get this lifer.

Finally, to close this post and whet your appetite for the next post (and Chinese food), this is a fortune I got while stopping to eat on this northern MN trip, a fortune that came true…

4 thoughts on “In the Spruce Bog, Three’s Company but Four’s a Party”