The reaction in our household to the snowpocalypse heading our way tonight is mixed. The kids and non-shoveling adults are excited.  I am in denial and thinking back on warm, sunny days in Arizona to cope.  Just like the warm, snow-less fall was fun while it lasted, so too were the AZ trips of two dozen+ lifers.  In both accounts, those days are long gone. While the state still holds a hefty amount of lifering potential for me, the hunt for new birds in the state is becoming more challenging.  I had modestly hoped for about a dozen new birds on this trip but fell far short of that: 7. This post will highlight 6 of those lifers. The 7th was the main target bird of the trip and will get its own post.

The very first morning after we arrived in AZ, my dad and I drove up to Gilbert in the predawn to join forces with Tommy DeBardeleben and Gordon Karre to look for a couple lifers.  One of the oddest targets I’ve had in Arizona was an out-of-place Tricolored Heron that had become a regular at the Gilbert Water Ranch.  The other target bird for the morning was a Black Vulture.  We met Tommy and Gordon at the Gilbert Water Ranch where Tommy devised a plan in which he would scour the 7 ponds at GWR for the slippery Heron while Gordon would take us over to Mesa where the Black Vultures roost.  The Vultures roost on power poles along a street bordering Leisure World, a gated retirement community where only people over the age of 55 can enter.  Oddly, or not so oddly, this is really the only reliable place in the Phoenix area to get this Vulture. Whether it’s the beckoning sun or the knowledge that Leisure World didn’t produce the previous night, the Vultures take flight not long after sunrise.  Gordon had been scouting for us and knew we had to be there on time in order to see them.  It pays to have a good guide because he was absolutely right. 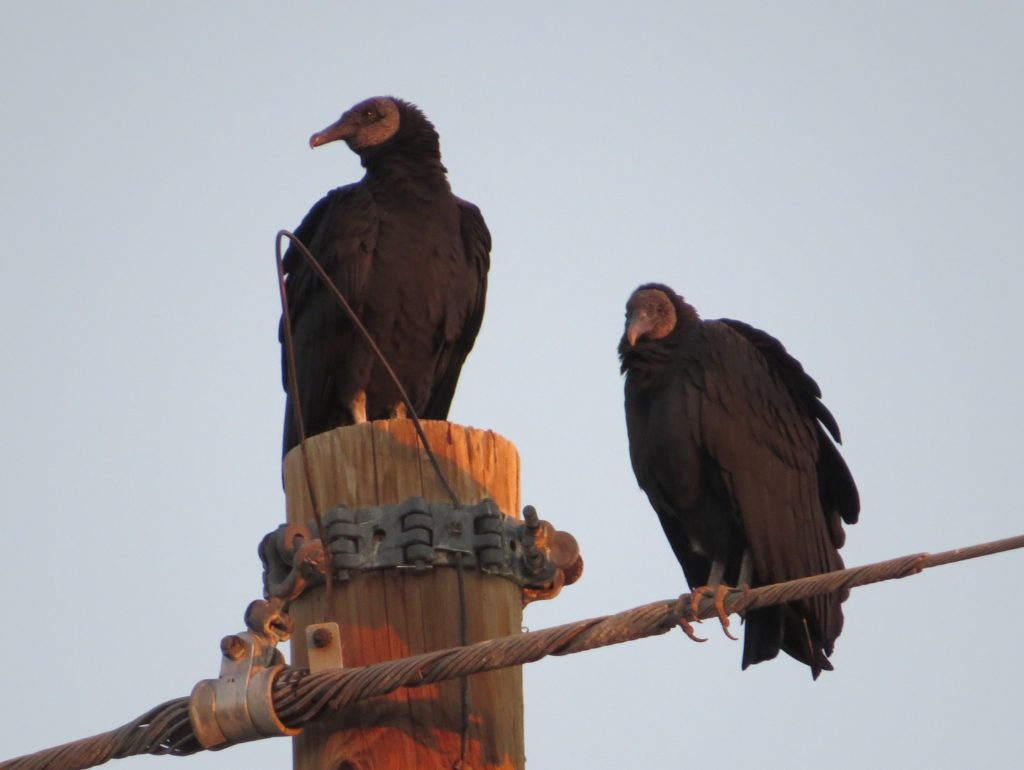 We spent quite a bit of time watching several of these birds and their Turkey counterparts, hoping for more sunlight and a chance to see their distinct underwing pattern in flight.  But they just sat and sat… 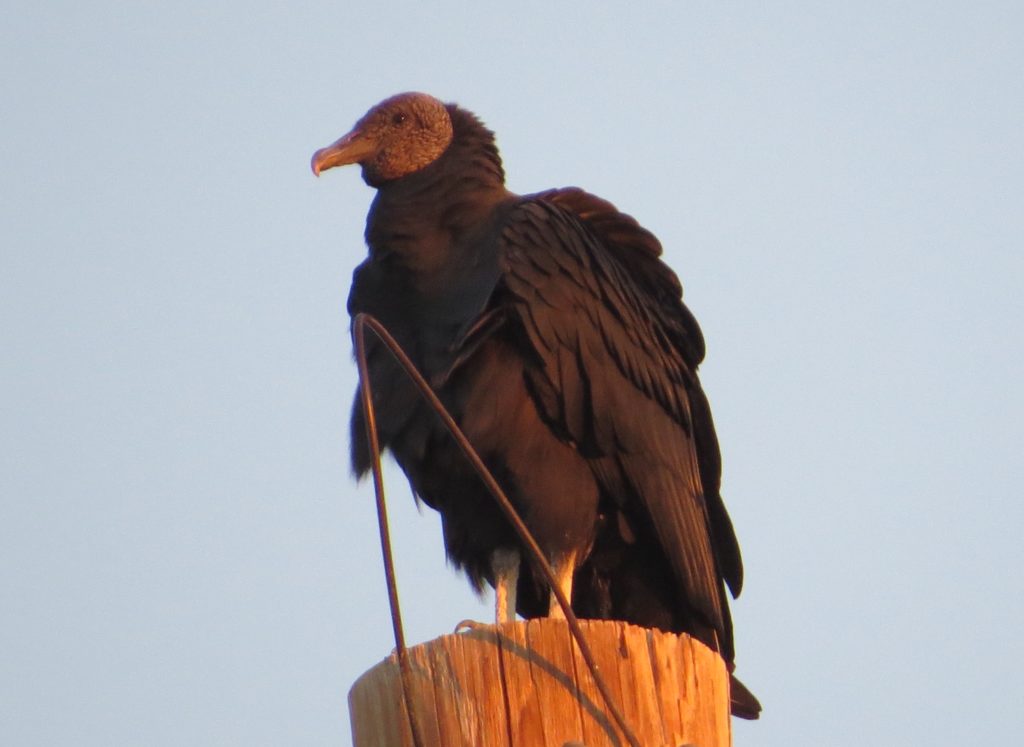 Eventually they did lift off allowing us to see the white “hands” of the underwing, but I wasn’t able to capture a photo of it.  Later in the trip, though, I spied a small kettle of this new-to-me Vulture and was able to photograph them in flight. 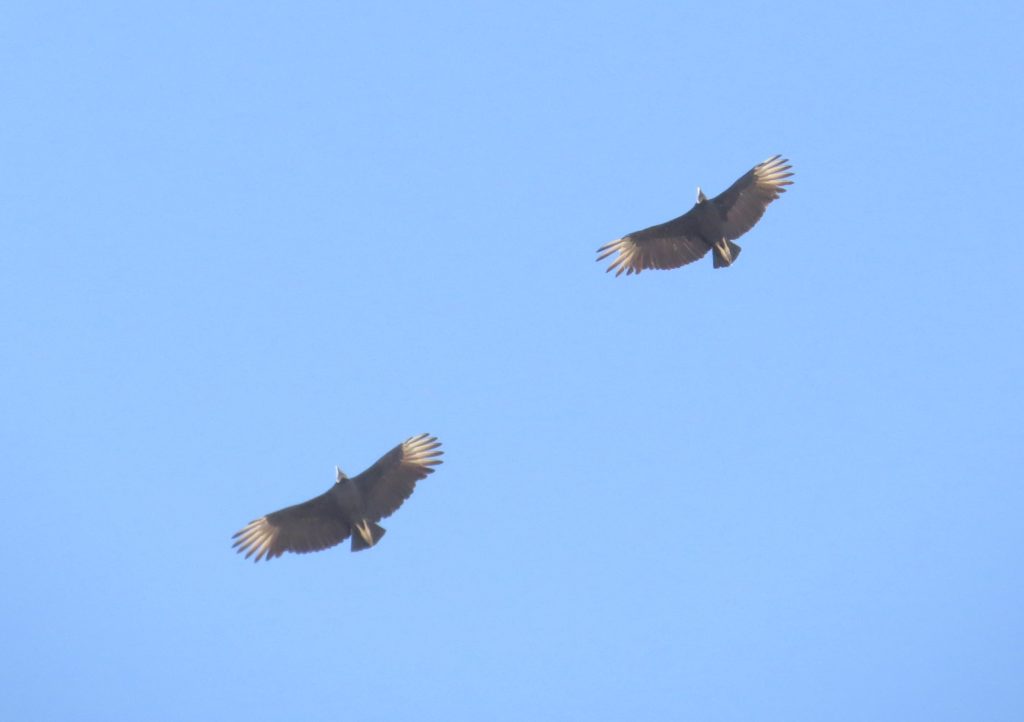 While I was Vulture-hunting with Dad and Gordon, Tommy called saying he had located the Tricolored Heron.  So we headed over.  Unfortunately it was distant and horribly back-lit and not providing the shocking, up-close looks a lot of birders have gotten of it recently.  Tommy and I spent a lot of time trying to find a way to get closer to the bird but we were striking out.  On our way out of GWR, we spotted it flying to a better location and I was able to get some photos. 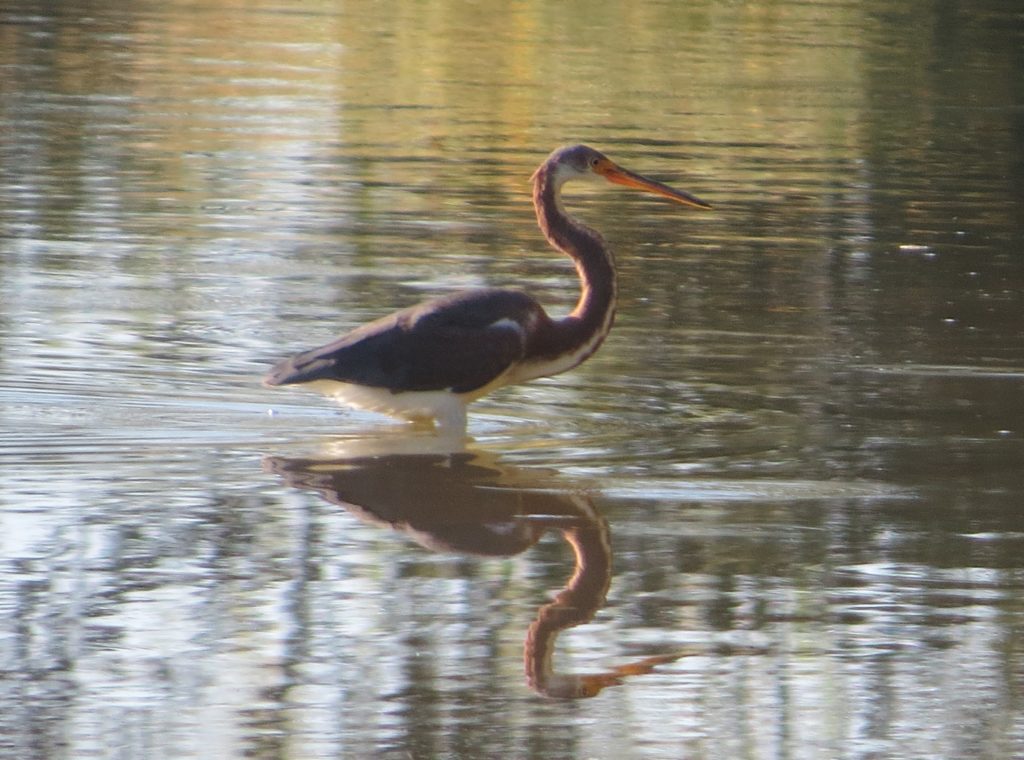 After this brief morning outing with the main objective birds secured, we parted company with Tommy and Gordon–we would all later be meeting up that evening in Madera Canyon in southern Arizona to go after the #1 bird of the trip.  Once the family was all settled in our Green Valley hotel, Dad and I headed out once again to meet Tommy and Gordon at the Santa Rita Lodge.  After watching a couple Magnificent Hummingbirds on the feeders, we decided to use the last half hour of daylight to try for one more lifer, a Rufous-winged Sparrow.  Tommy knew just where to go, and he did not disappoint. 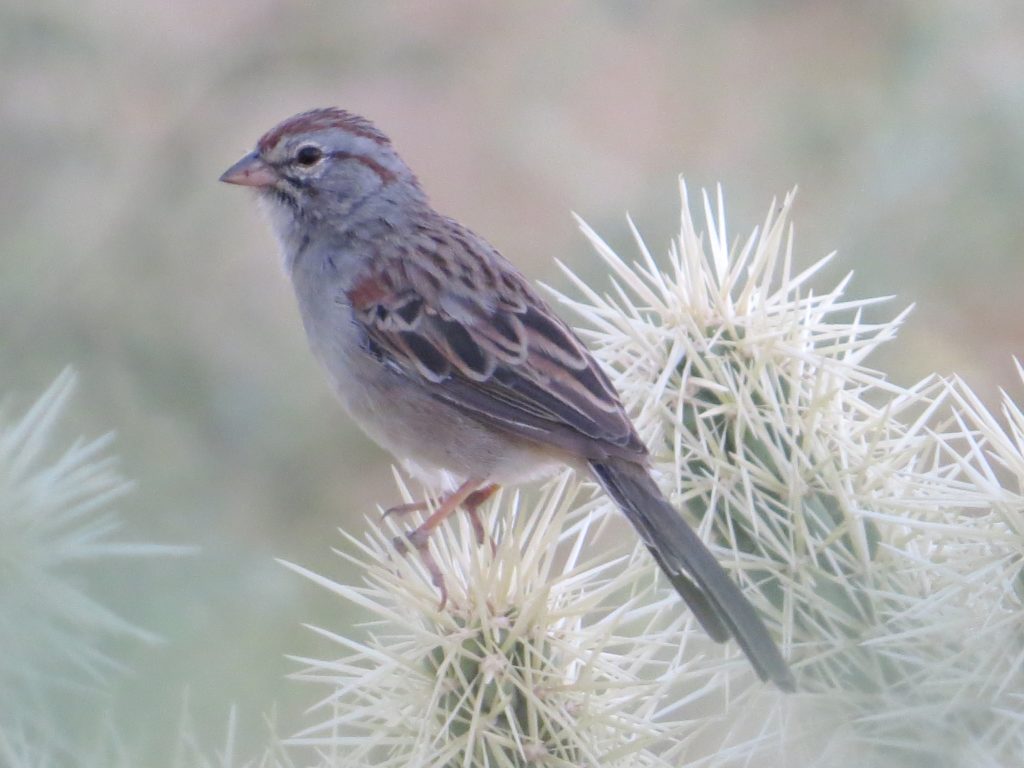 The next lifer of the trip took place on that dark night in Madera. More on that later, but the next morning we were on the hunt for lifers again, taking the De Anza Trail near Tubac.  As was mentioned in the last post, several good non-lifers were had.  The lifering was a bit slower than expected, but we eeked out a couple. First one was the Pyrrhuloxia.  Now for my Minnesota friends who may not have a clue how to say that bird’s name, it is pronounced, “Purr-lux-ia”.  Even though I was hoping to see a male, it was still rewarding to at least see a female of the species. 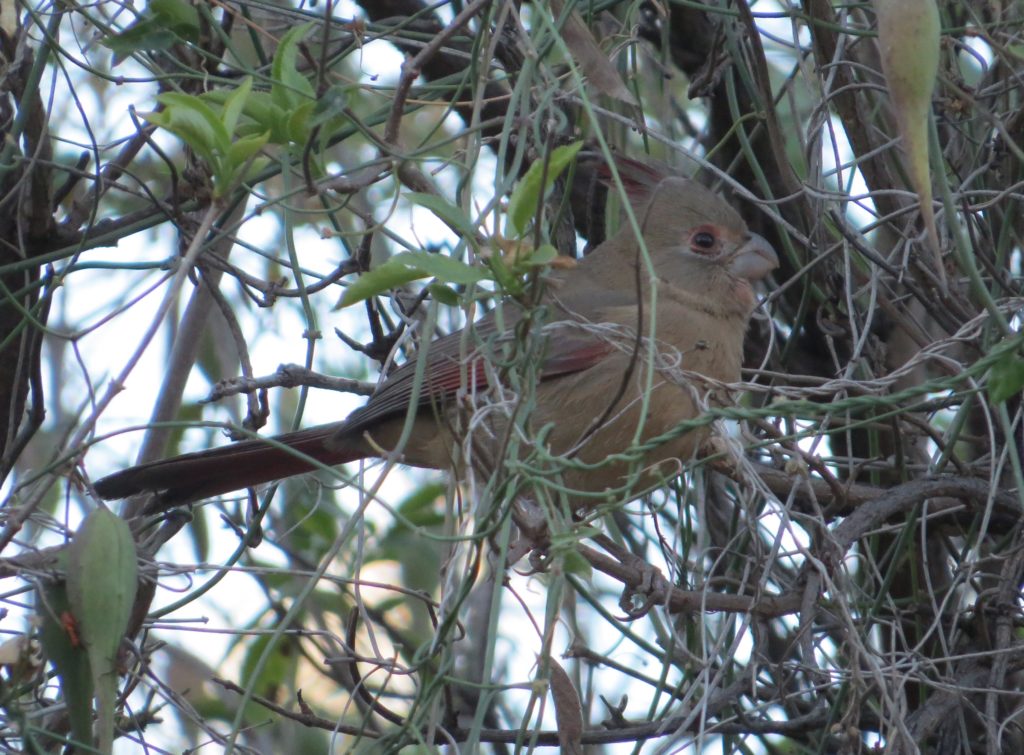 The only other lifer on this walk was a Gray Flycatcher that Tommy detected.  I continue to be amazed by how much I find myself liking Empids. 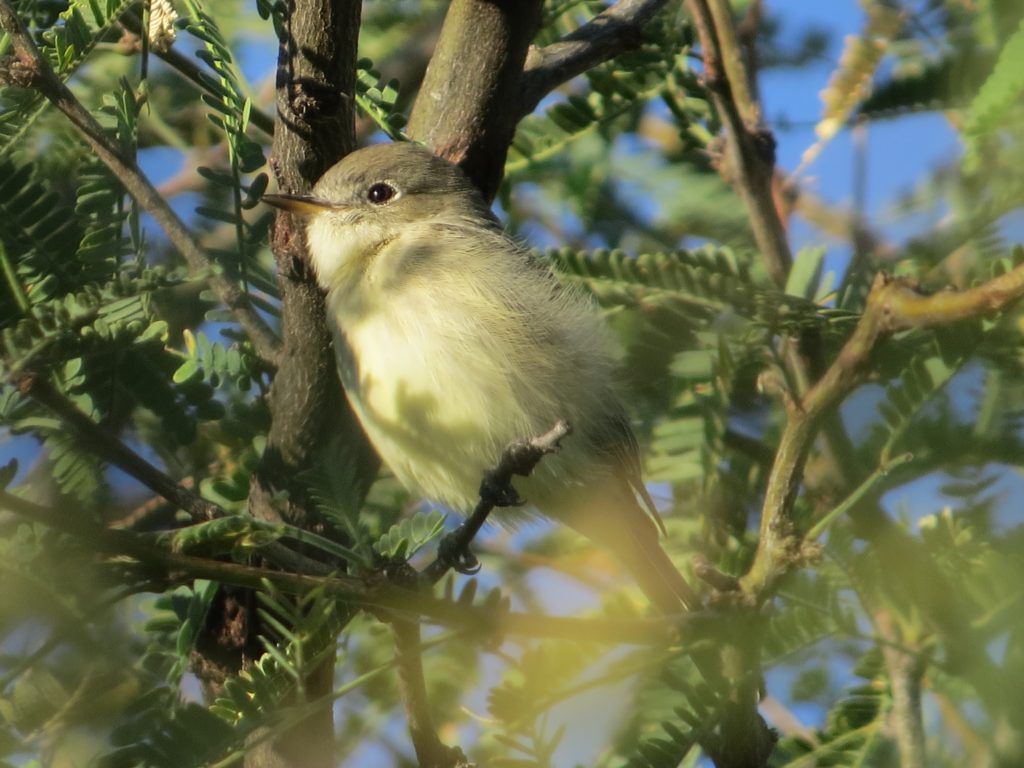 Finally, the last lifer is one I picked up in the desert scrub around the hotel.  Lifering around the parking lot while waiting for the family has become sort of a tradition now.  While last year I picked up Rock Wren and Cassin’s Kingbird lifers at the hotel, this year I found a cheerful little flock of Brewer’s Sparrows. 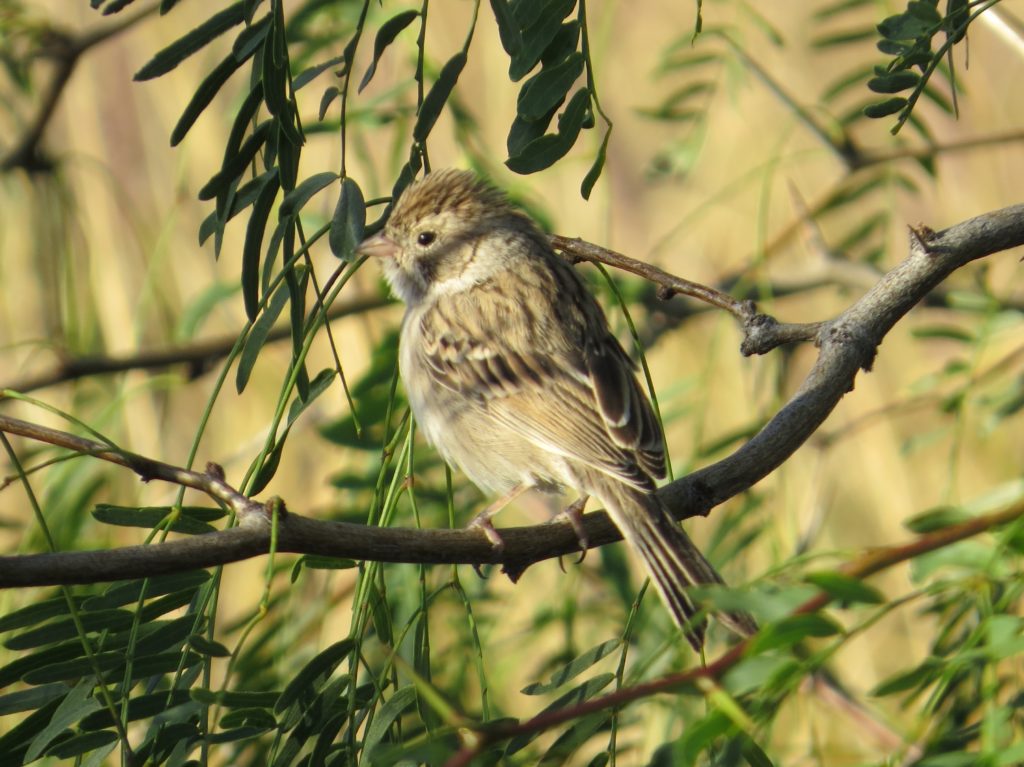 I’m saving the best for last and putting it in a post all on its own.  Nightbirding usually means one thing: Owls.  Coming up is a multimedia post of our successful night. Stay tuned!