It is no coincidence that this blog has gone silent during the month of September as the entire family is in the throes of another school year beginning with all its extra-curricular chaos.  We are busy. But. There has still been some good birding squeezed, packed, even shoe-horned into the narrow margins of life.  Shockingly, there have been multiple new county birds and multiple life birds added. It’s actually been a really solid month for birding.  Instead of showing blurry pics of some new county tics or detailing some chases I’ve been on, I am going to tell the story of a lifer experience that I will likely never have again.  The bird is the Le Conte’s Sparrow.

First, though, a brief history: Le Conte’s Sparrows breed in the northern half of Minnesota but are only ever seen in my county in central Minnesota during migration.  The time to look is late September to early October.  While it is a very uncommon species, it is an expected species every fall in my county in the right habitat. Inevitably, though, I am busy with other things this time of year and can never seem to make it out to one of the numerous grasslands in my area to look.  Two years ago, Steve Gardner and Joel Schmidt invited me to look with them one day after school at Prairie Woods Environmental Learning Center.  I passed. Sure enough, Steve and Joel lifered on Le Conte’s on their first attempt that afternoon.  As time passed I would forget about Le Conte’s.  As more and more birds have been crossed off the listed of wanted birds, though, Le Conte’s has started rising to the forefront of my desired birds.  Last summer I tried to relocate several Le Conte’s Sparrows on breeding territories in the Sax-Zim Bog but was unsuccessful. That was my only previous attempt to see a Le Conte’s Sparrow.

Fast forward to this fall, and I was determined to make every effort to look for this species in my home county during migration. Getting a lifer in the county is indeed a rare event and therefore quite exciting.  This species is the last “easy” lifer I can get at home.  The more I thought about it, the more excited I became to get this one at home rather than in northern Minnesota. So on Friday I made my first attempt with Steve Gardner, Randy Frederickson, and Jeff Weitzel. The after-work search was short-lived and unsuccessful as raging mosquitoes drove us all to the brink of insanity. On Saturday morning I tried a WMA close to my home.  While there were gobs of migrating Sparrows of a half dozen different species, I didn’t find the one I wanted and had to quit early to go camping with Evan and his Cub Scout pack.

That next day on the way home from the camp-out, Evan and I stopped at the same WMA which is a mix of prairie and cattail slough habitats.  It was an absolutely perfect October day: temps in the 70s with a clear blue sky, golden-brown corn fields and prairie grasses, cattails that are still bright green, all accented by the mesmerizing palette of oranges, yellows, maroons, and reds of shrubs and trees on the prairie. It was a good day to be outside, even for Salamanders. 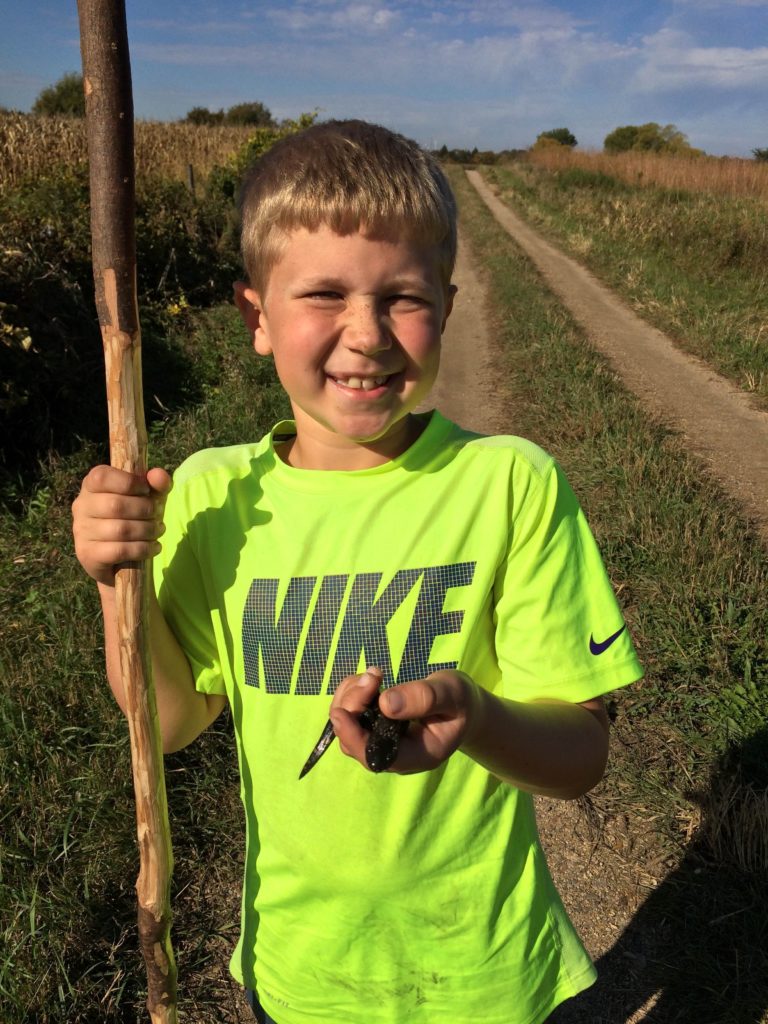 Evan was quite pleased to get his lifer Tiger Salamander. The Le Conte’s was just not a big deal to him.  In fact, when I noticed a promising-looking patch of prairie that butted up to a cattail slough, he declined to walk it with me, opting instead to stand in one spot observing, whittling, etc.  It was on this solo walk-about where the magical moment finally happened: I flushed a Sparrow from the prairie hillside toward the cattail slough in front of me.  I advanced, somewhat hopeful, and stopped about 15 feet short of where it landed. I gave a little pish, and a yellowish bird popped up to investigate.  I knew what it was before I even pulled up the binoculars.  Then, with the sun at my back, I looked through the binoculars and finally saw this striking lifer.  What a thrill–and to experience it so close to home made it even better.  Not only did I finally get this lifer, but a little more pishing allowed me to get some photographs before it disappeared into the cattails forever. 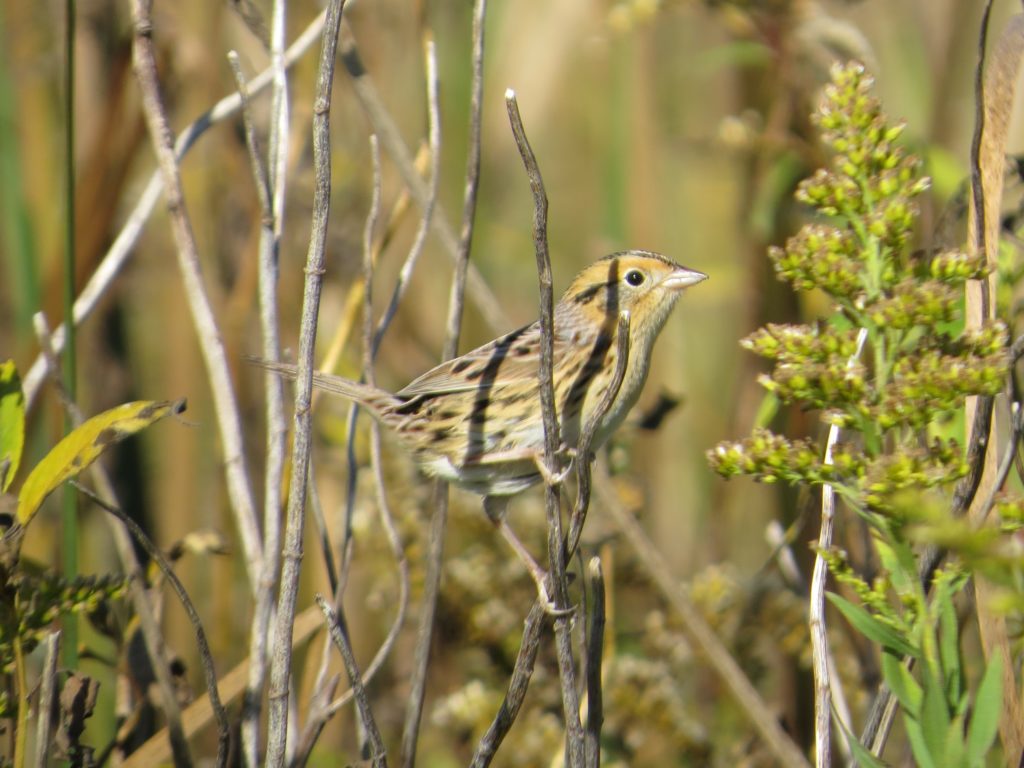 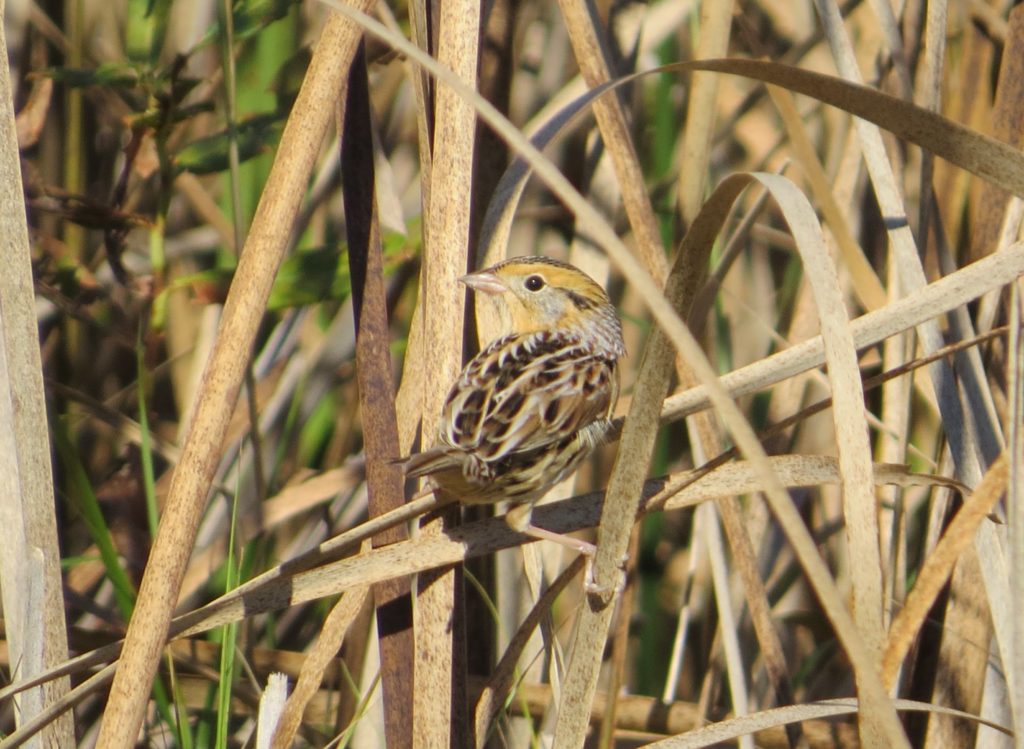 And with that I met back up with Evan and went home. It was perfect.  Finding the last regular lifer I can possibly get in the county on such a beautiful day was bittersweet.  I don’t know how many more lifers, if any, I will get in the county, but it doesn’t matter.  This was a day to remember.

6 thoughts on “Savoring a Lifer, the Last of its Kind”