Birding. It never stops throwing surprises at me. After going on those raging birding benders this past month in northern Minnesota, it was time to settle down. Time to get back to the real job, back to responsibility.  And that’s exactly what I set out to do this Wednesday when I woke up ready to get stuff done. My work for the day involved collaborating with some of our district’s elementary teachers. Responsibility was going well. Productivity was happening.  But just as I was packing up to leave, Jeremy (Barred Owl Jeremy) started telling me about a “baby Great Horned Owl” in his friend’s yard.  My mind was slowly processing this information–February, baby Owls…something isn’t adding up here. While I struggled to understand, he held his hands about 8 inches apart and said, “Yeah, it was this big.” Now I was awake and shock was setting in as I realized he was talking about a Northern Saw-whet Owl. And the evidence kept mounting: “It just sits in a pine tree all day right by their window.” I nearly dropped my laptop. A quick Google image search had Jeremy confirm what I suspected. Jeremy then added fuel to the fire that was raging in me when he told me the Owl was in the tree that very morning. Then, nice guy that he is, Jeremy, through a flurry of text messages, arranged for me stop by his friend’s house that very evening after work.

Birders know that Saw-whets are tough, tough birds to get.  They aren’t rare, but hardly anyone finds them because of their size and their ability to remain still in well-concealed perches.  Then, when birders do find them, they often don’t share for fear that numerous birders will come and disturb the Owls on their roosts.  If a generous or green-horned birder does post a location of a Saw-whet on FB, you better screenshot it quick before Admin takes it down.  So, to find one, you either have to put in a lot of time searching, have a serendipitous encounter, or know a guy who knows a guy that owes that guy some kind of an Owl favor.  Nearly 4 years and 400 birds into this hobby, I had yet to be successful in getting a Saw-whet through any of those means.  I had seen 14 of North America’s Owl species, and this was not one of them.  I knew it would happen eventually.  I’ve put in time searching near and far.  I even went to great lengths to track down a roost site that was public knowledge for all of 5 minutes on FB.  But not even three visits to that white-washed tree this winter netted me that bird. Then a couple weeks ago I found out I there was one on a very road I had traveled that very same day in the Sax-Zim Bog.  The Saw-whet saga dragged on. Until this day.

My moment had finally arrived.

On hardly any notice, birding buddy Steve Gardner was ready to roll with me just as soon as I got out of work, picked up kids at school, and dropped Marin off with Melissa. I just assumed Evan wanted to go.  Strangely, and this may haunt him someday, he opted to go along to his sister’s dance practice instead. What the heck? He hates going there, and this was a lifer Owl.  As Steve and I pulled out, Melissa asked Evan if he was sure he knew what he was doing to which he responded, “Mom, I’m 8. I have my whole life to look for that bird!”

Steve and I don’t have our whole lives and much has already slipped by Saw-whetless. Needless to say, we were booking it to get to the location an hour away just before sundown. I don’t think Steve and I were prepared for how cool this Owl was in real life. 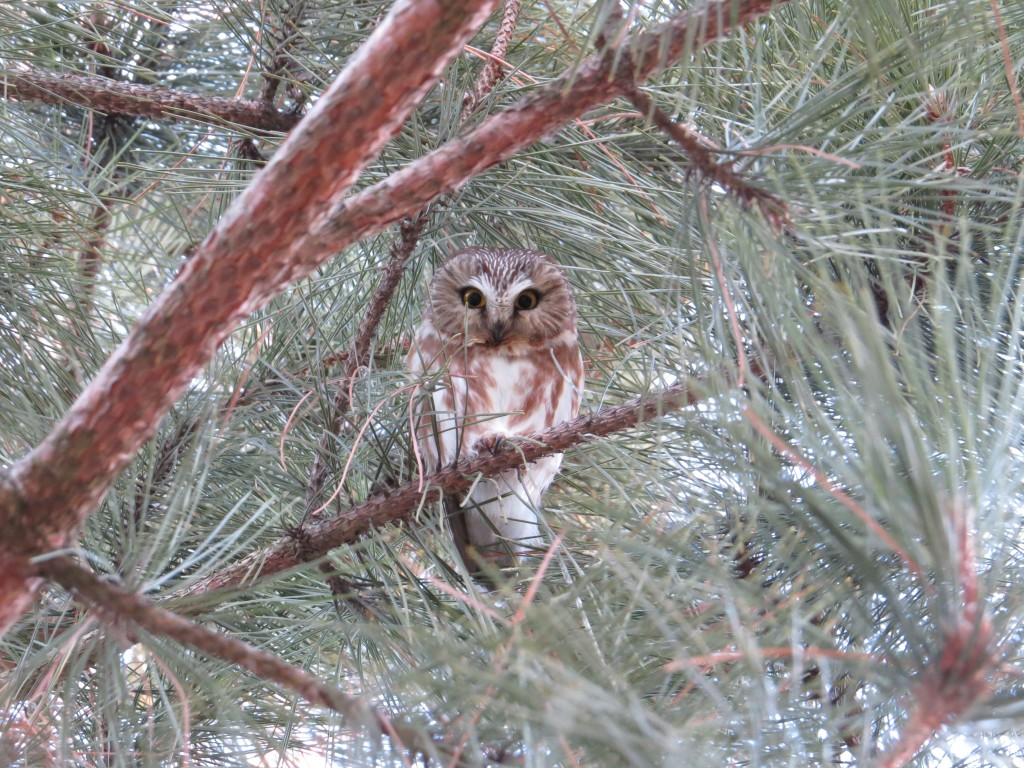 The Saw-whet is not much bigger than a pop can. I don’t think I’ve seen an animal that’s cuter. Jeremy’s friends pinpointed it for us right away.  That was probably a good thing… 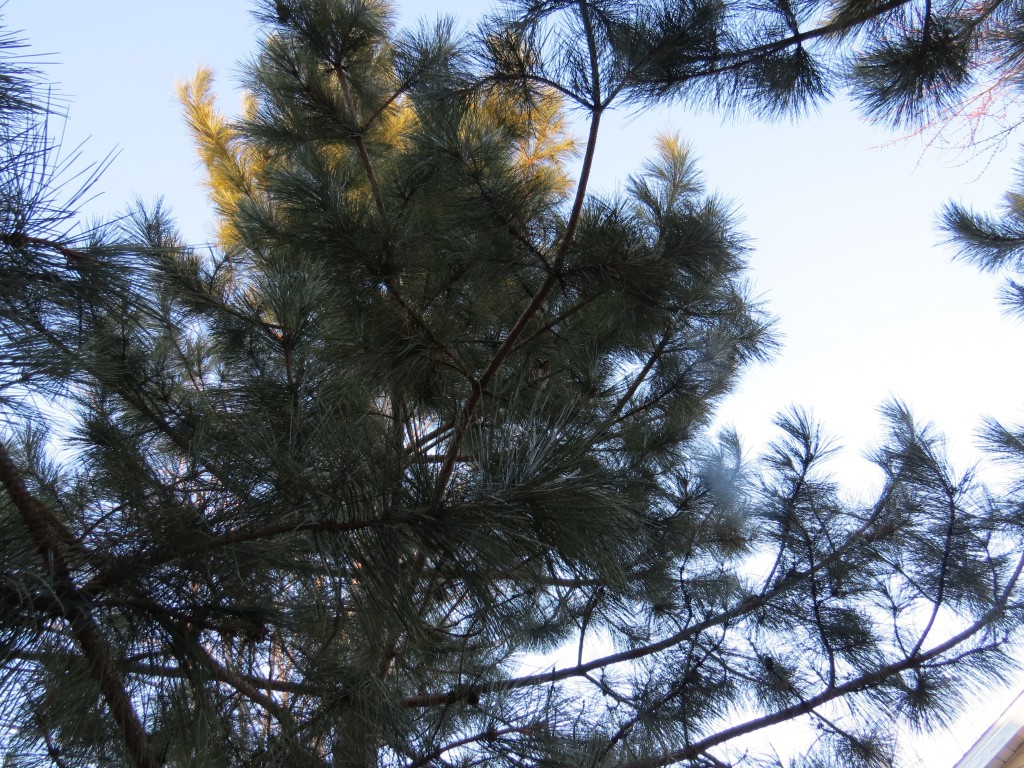 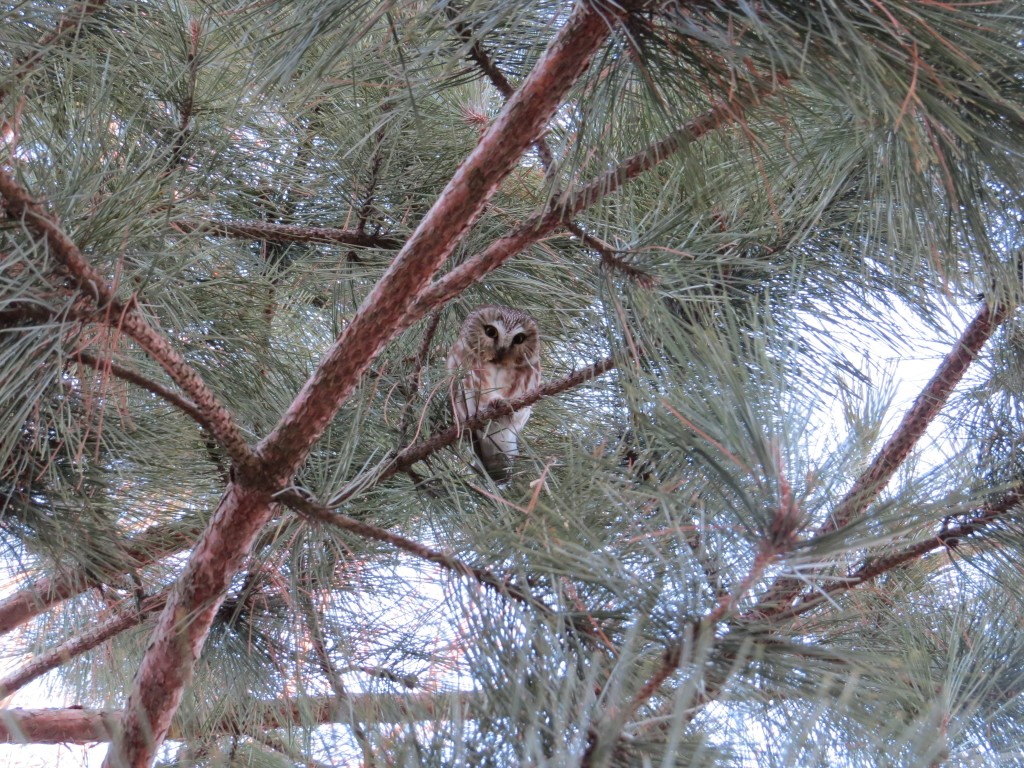 This tame Owl just sat and watched me and Steve, mostly Steve. 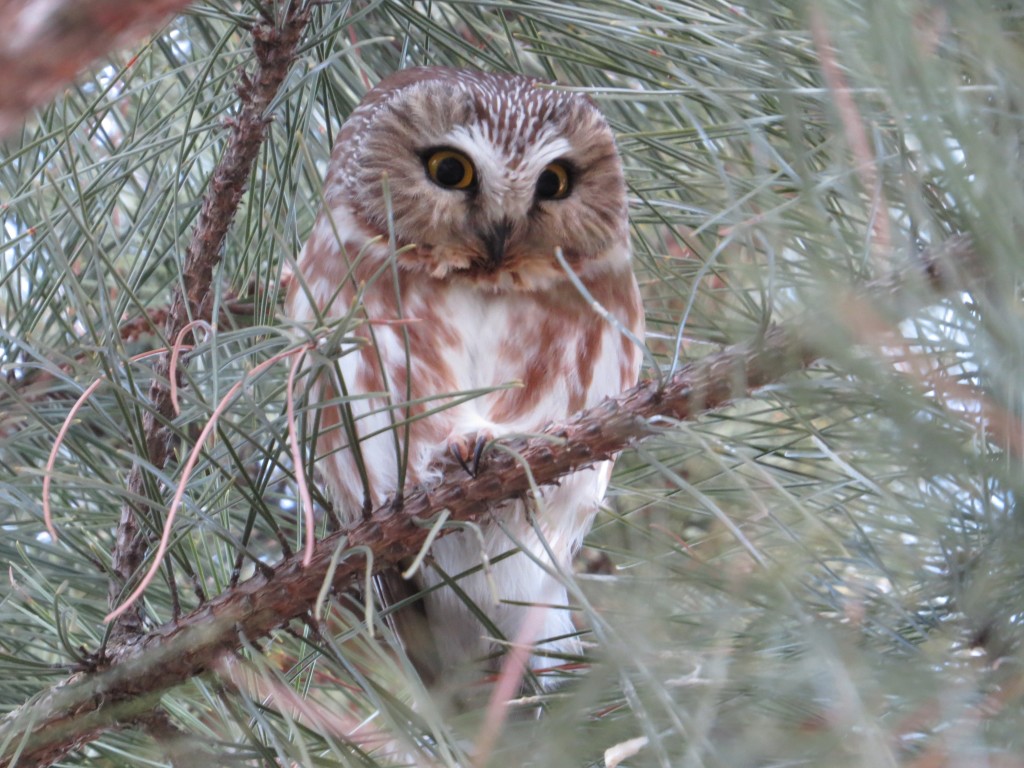 Occasionally it looked at me. 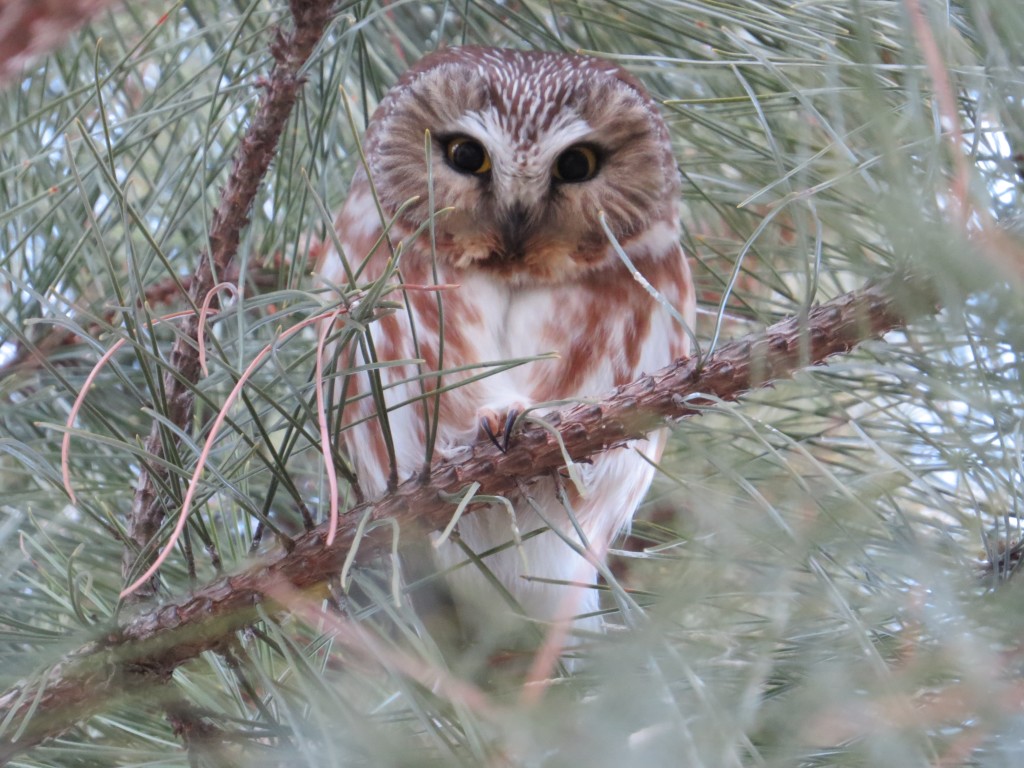 But it was mostly captivated by Steve. 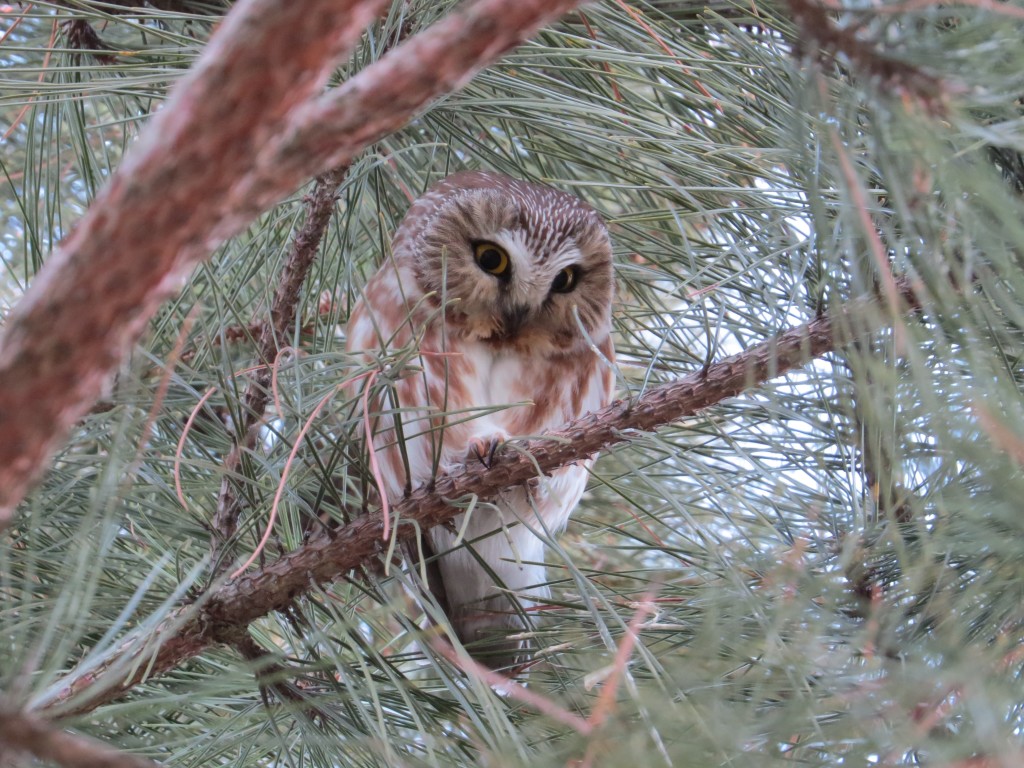 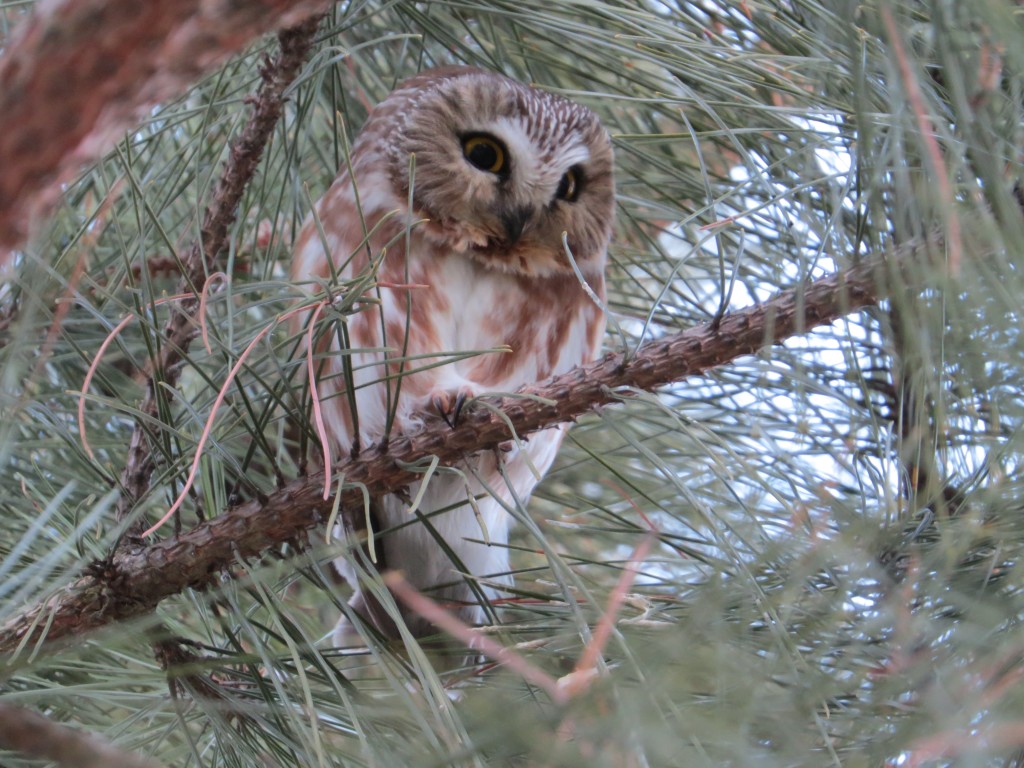 What was fascinating to me was how sloth-like this Owl was in moving its head.  The movement was almost indiscernible. The fact that we were finally looking at a real Northern Saw-whet Owl combined with a close encounter with a tame bird makes this one of the best Owl experiences I’ve ever had. 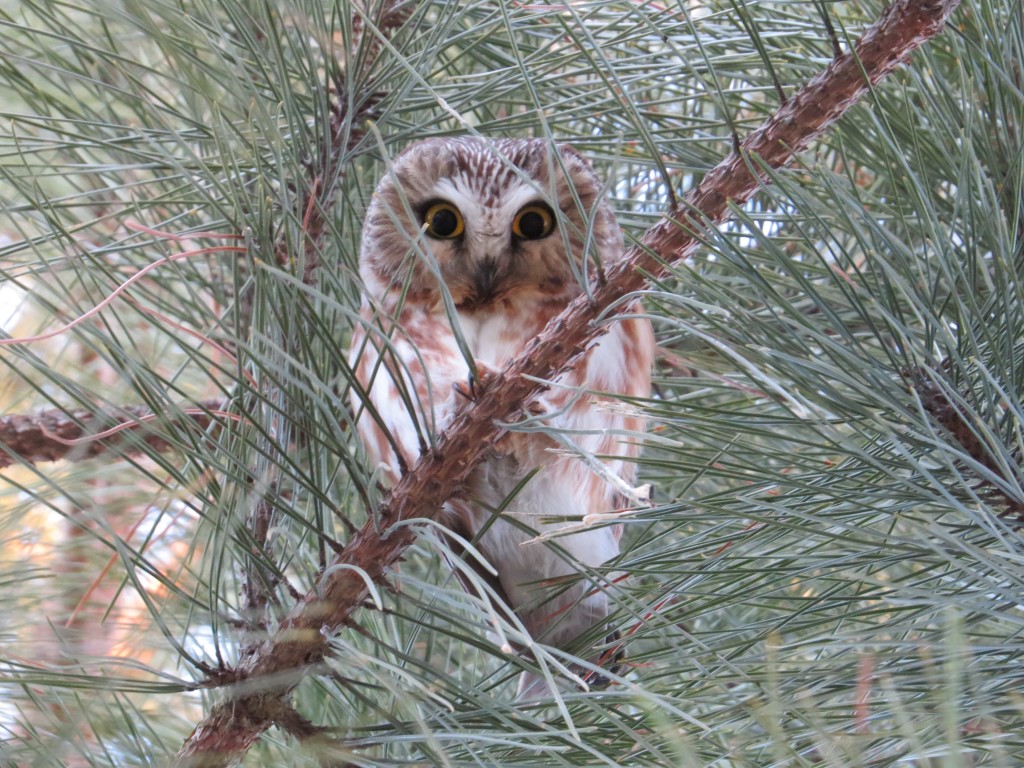 After taking last looks at the Owl and admiring the massive pile of pellets and all the whitewash from an Owl that has sat in this same spot every day for the winter, Steve and I thanked the homeowners and headed home feeling good…or evil.  Steve called up his twin brother who is also a birder and rubbed in his new lifer.  I went to the liquor store.

This was a long-awaited day.  It felt so good. I honestly thought it was still years away from happening.  A huge thank you to Jeremy for an extraordinary addition to mine and Steve’s life lists!