Things have been pretty bleak on the prairie lately as far as birds go (or as far as anything goes, actually).  The Snowy Owls packed their bags and left long ago.  Birds of the field have been in short supply or absent altogether.  Adding insult to this injury is that it has been extremely cold these past few weeks as temps have been well below zero.  Hoth is looking like a pretty good vacation destination these days both for its scenery and temps.

So what’s a birder to do?  Look at waterfowl, of course!  Wait, what? Isn’t it a frozen wasteland here? Birders know a lot of crazy, cool stuff about local, natural phenomena that the vast majority of area residents know nothing about.  One such phenomenon is knowing where open water exists in the county during the winter months.  When I got into birding a couple years ago, I was blown away to find out that several species of waterfowl have been recorded on past Willmar Christmas Bird Counts.  Heck, I was blown away to find out we had open water. I mean, every bit of water is seemingly, or should be, in a solid state, right? 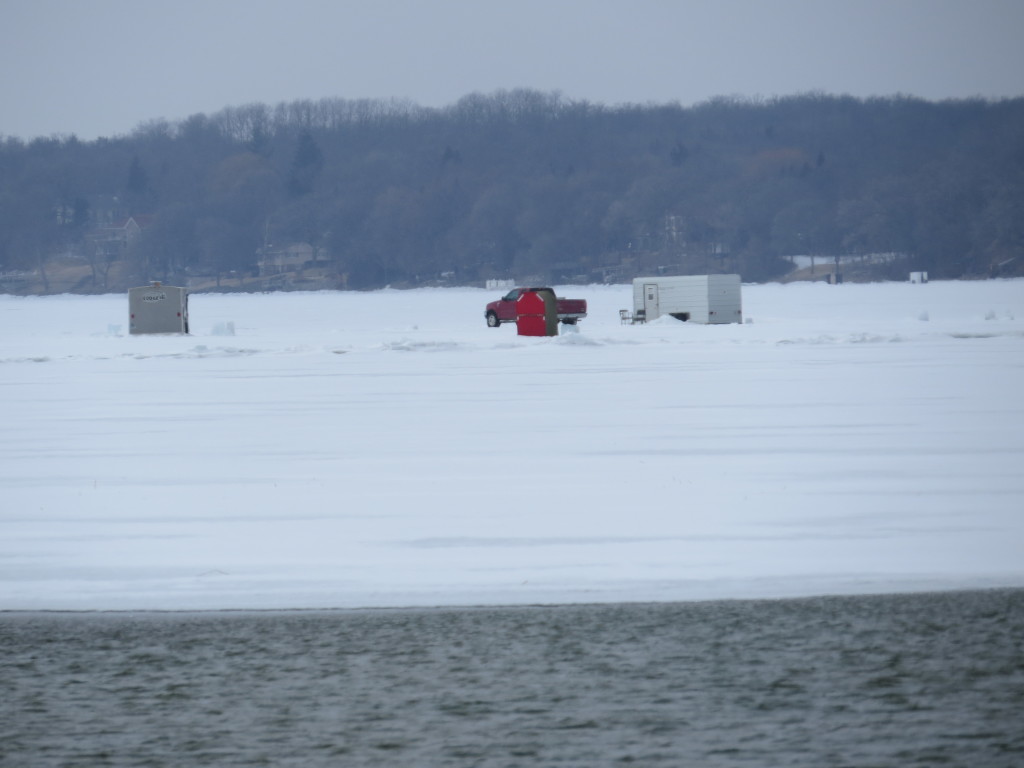 “Let’s drive our truck on the lake by the open water,” they said. “It’ll be fun,” they said.

The further I went down this rabbit hole of birding, the more secrets I’ve learned.  One of those secrets is that small numbers of Trumpeter Swans overwinter in the Spicer/New London area.  I was reminded of this when local birder, Coralie Jacobson, posted on Facebook that she saw a bunch of swans on the outflow of Green Lake at the northeast corner. 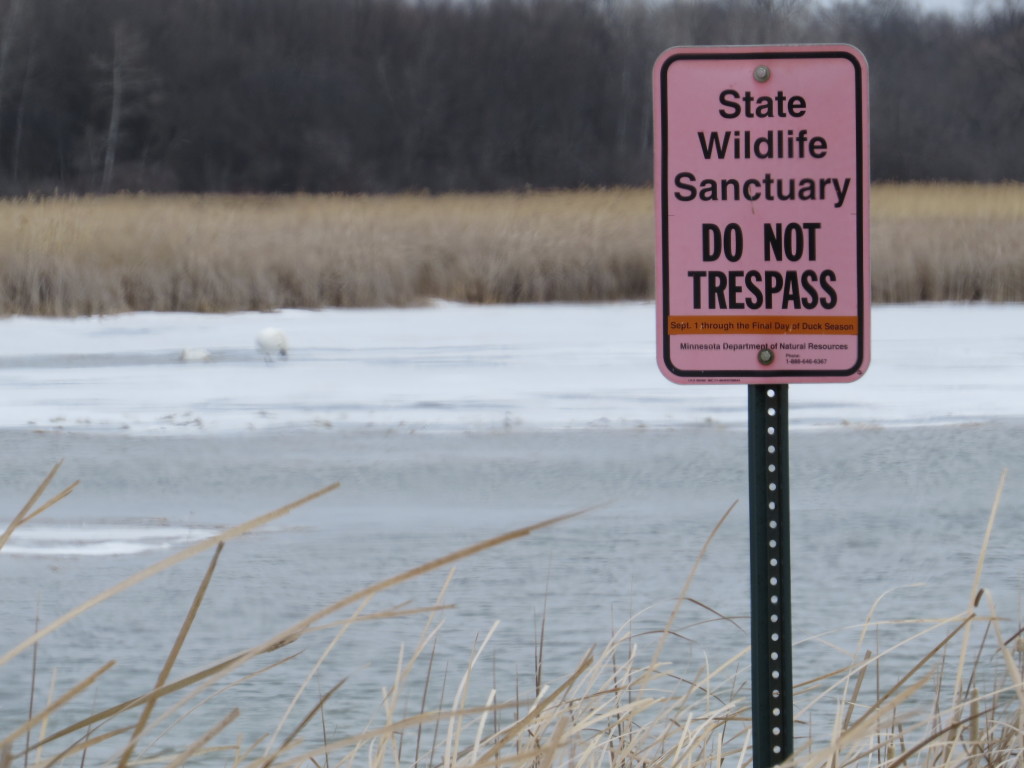 I’ve seen plenty of Trumpeters in the county, but seeing them in February is something I had never done and needed to document for eBird.  It was certainly the cure for the winter birding blues.  A couple weeks ago I drove up to Green Lake and was not disappointed. In all, I counted 19 Trumpeter Swans.  These DINCs (Double-Income No Cygnets) were enjoying quite the love fest, being all exclusive from the other swans. 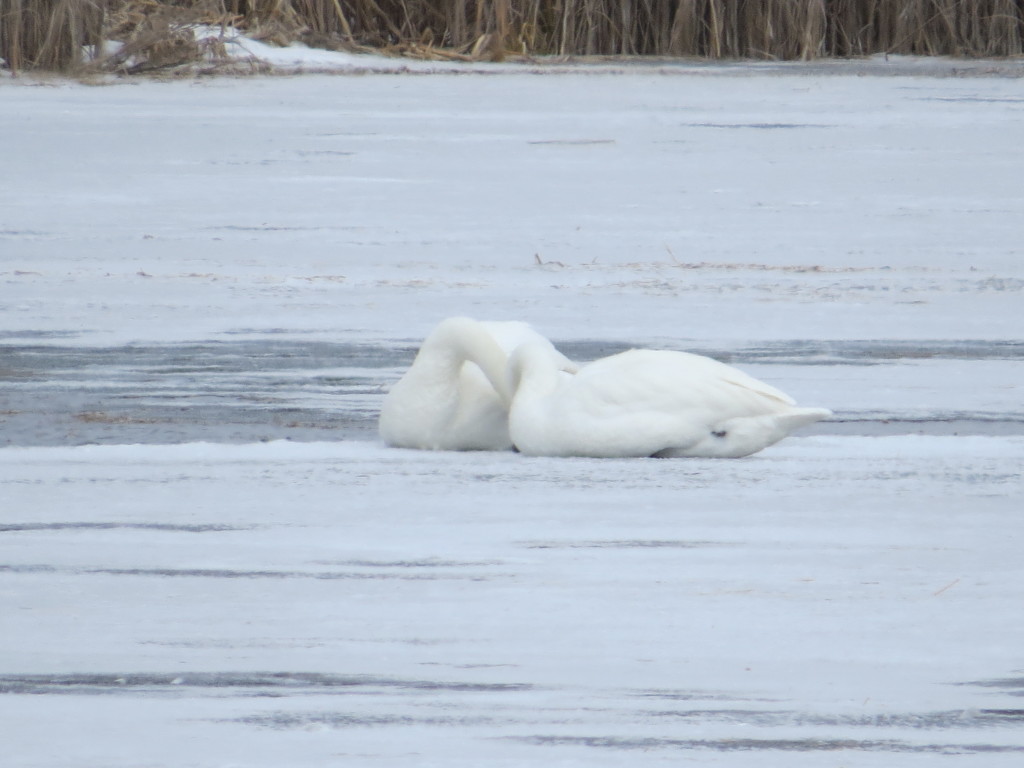 When not necking and acting like that adorable couple that makes people cringe, they were striking contortionist poses and looking awfully dapper in their crisp black and whites. 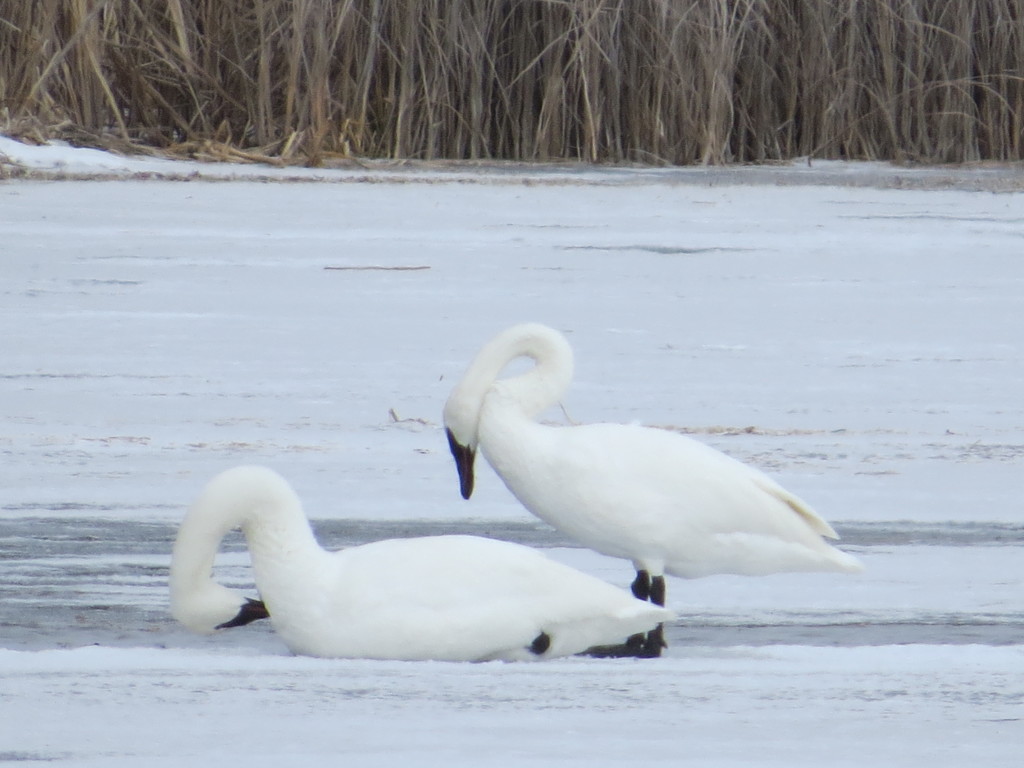 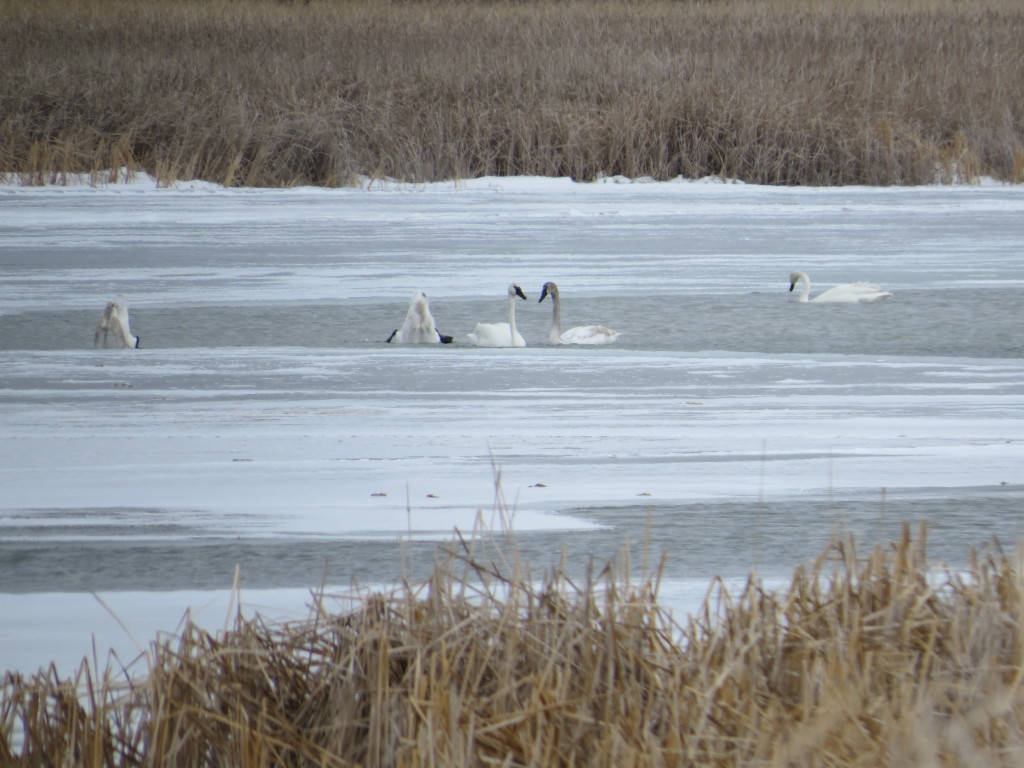 It turns out that the outflow of Green Lake is not the only open water around these parts in the winter.  The Crow River right in downtown New London also stays open just beneath the dam at the Mill Pond and along Central Avenue.  In late November 2014, Coralie Jacobson found herself an incredible lifer on this little stretch of river in town–an American Black Duck associating with about two dozen Mallards.  This species has been something of a nemesis bird for me, and it’s a remarkable bird for our area.  Occasionally one or two will be seen by somebody during spring migration or in the late fall if there is open water around.  I have frozen my fingers and face scanning through thousands of Canada Geese and Mallards on Foot Lake trying to pick one out that Steve had found in late 2013. Another time I was minutes late for getting to a location of a sighting.  And this particular duck that Coralie found? I think I made a half dozen trips to New London looking for this bird, hoping to finally add it to my county list and record a new Kandiyohi species for eBird. Joel found it no problem.  Counters for the CBC found it no problem.  I had lots of problems finding it.  I had so many failed attempts and it was getting deeper and deeper into winter that I had completely given up on it, settling for licking my Black Duck wound along with the still open, festering wound of missing a county Long-tailed Duck by an hour last fall.

Last week after I dropped Evan off at school on Monday, I went for a drive-about in the northern part of the county-a land I haven’t explored much.  The Black Duck was far from my mind since it was last seen two months ago. This solo venture was birding desperation, plain and simple.  I didn’t even know what I was really after.  A 2015 county Northern Shrike? Pileated Woodpecker year bird maybe? Perhaps a Snowy Owl even though I’ve used up all my SNOW luck for a decade? It felt hopeless and was even less interesting than it sounded. I decided to turn it into an eBird expedition, making notes of birds numbers/species/locations.  It was something to do, something productive anyhow.

My travels brought me by New London, so I thought I’d swing by the Crow River on Central Avenue to see if there were any Mallards to document.  I noticed that there were about 30 Mallards or so.  Interesting.  The ducks were located at a bend in the river that was not easily seen from the dam or from Central Avenue.  After some maneuvering I finally got into a position with the morning sun at my back where I could see the ducks. The conclusion of my quick scan was Mallards-every one of them, but truthfully I wasn’t even thinking that the Black Duck was a remote possibility.  It had to be gone. 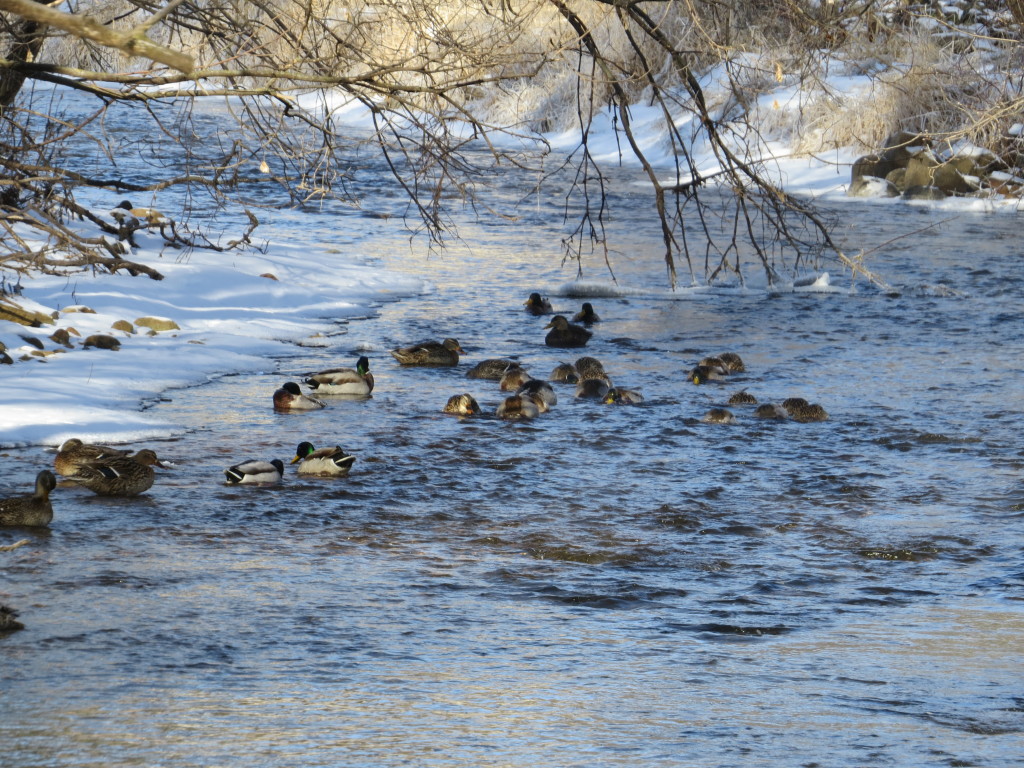 Anyhow, I decided I would glass the Mallards and try my best to get a careful count of males/females for eBird since it was a manageable number.  Most ducks were facing upstream with their heads constantly under water foraging for food. It’s kind of hard to count ducks that look like rocks. 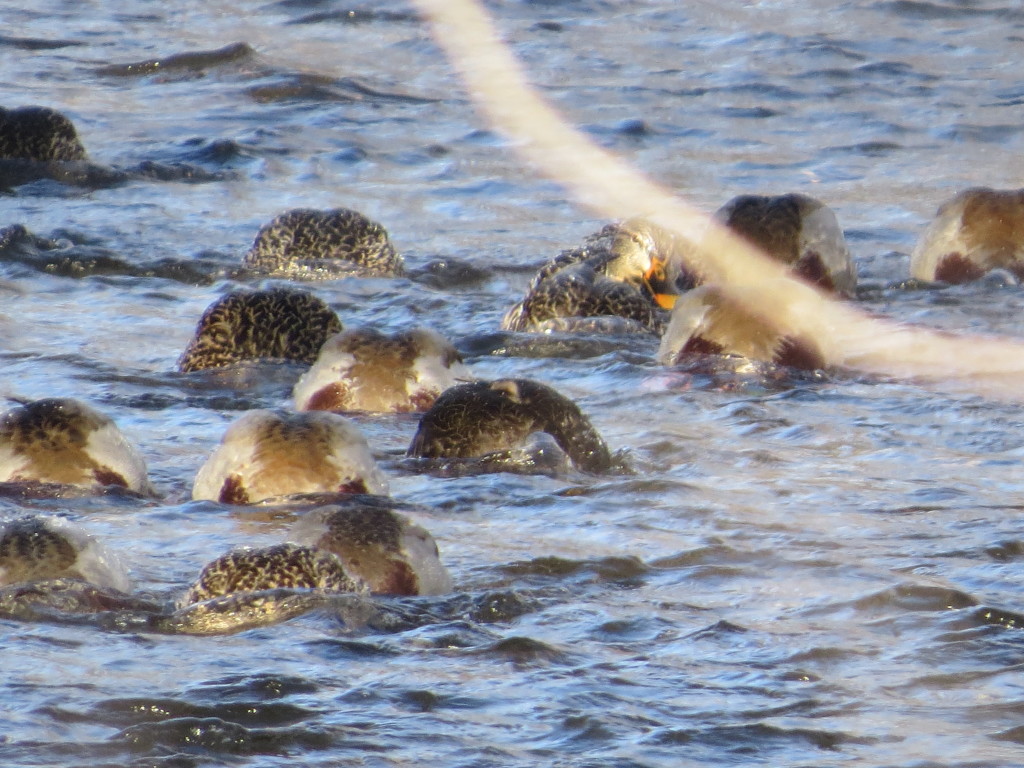 As I moved my binoculars from one bird to the next, one duck lifted its submerged head.  I saw a black cap and an olive green bill, and I literally laughed out loud.  There it was. Finally.  Had I not eBirded, I may have been long gone not knowing the Black Duck was right under my nose.  It felt SOOO good to finally see this bird here at home.  It was an A+ bird for a dull winter day–even better than if I’d found a Snowy Owl.  The icing on the cake was finding an overwintering Belted Kingfisher, an eBird rarity that I was unfortunately not able to photograph. 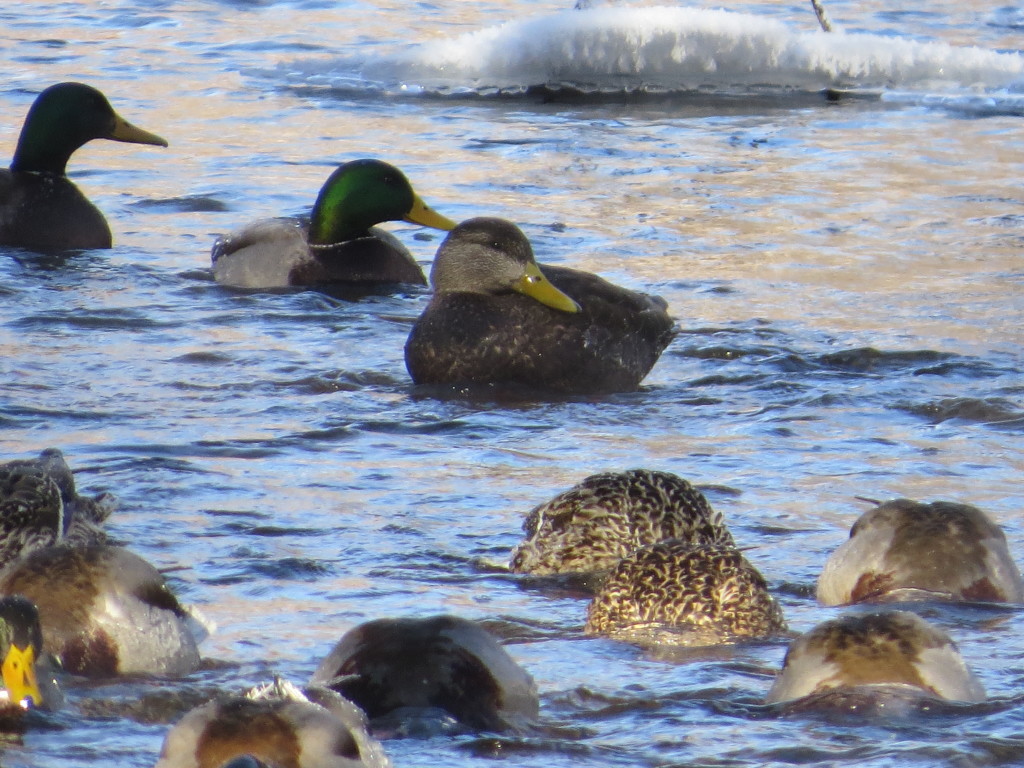 In my early birding days I had anxieties about differentiating an American Black Duck from hen Mallards.  How silly. 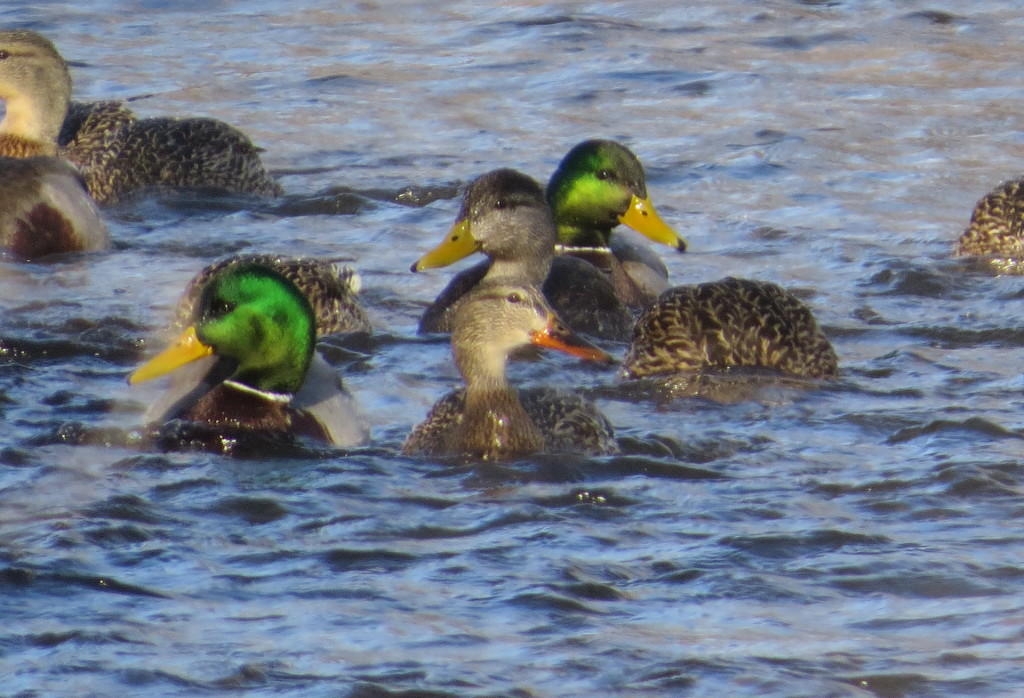 Ever wonder why they call it a Black Duck? 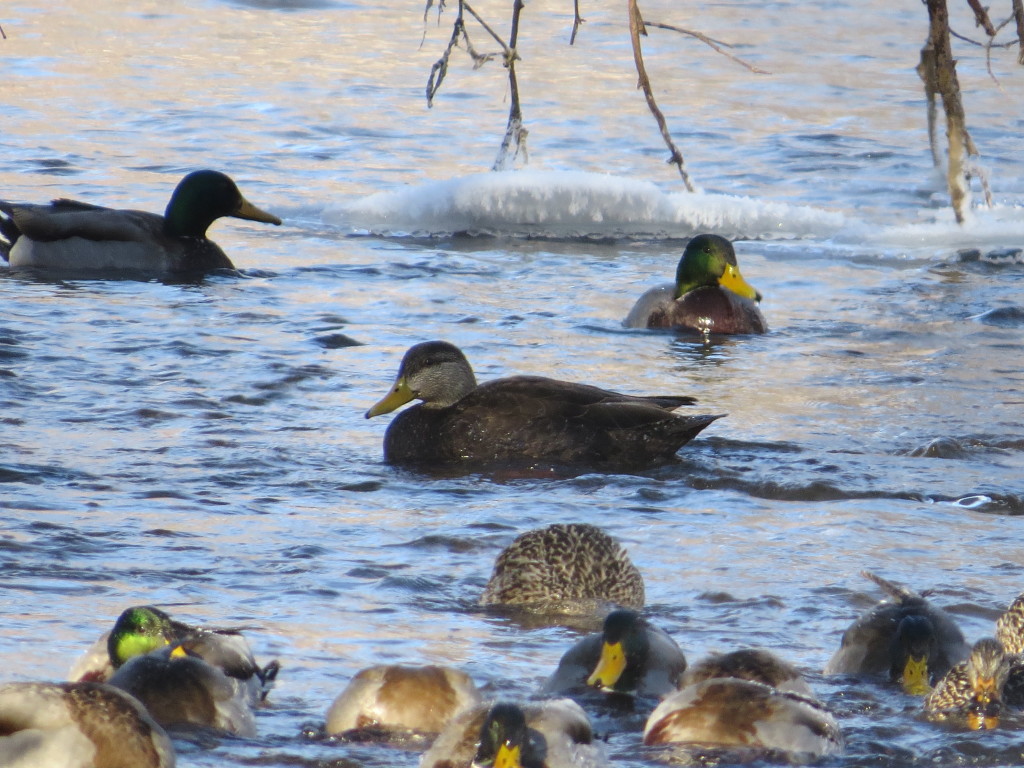 Wintefowling is tremendous fun but is not for the faint of heart, those with poor circulation or the beardless.  That said, it seems that winter’s last hurrah is waning and that warm temps are on the way.  Pretty soon there’ll be open water aplenty and waterfowl galore.  The truth is I’m going to miss these quiet winter waterfowling days when the few, the proud ducks are concentrated in tight spots.  Only the cool ones come in the winter.

6 thoughts on “Winterfowling – A Black and White Affair; No Kids Please”