December was a record month for us for seeing owls. By the time we had come home from our trip Up North, we had seen 6 Great Gray Owls, 3 Northern Hawk Owls, and 4 Snowy Owls.  But the fun didn’t stop there.  Well, I should say that for my family it did.  I was still thrilled with reports of local Snowy Owls and went on to check them out.  The appeal had worn off for my family. My coworker, Bonnie, in Grove City texted me on New Year’s Eve that the owl she had seen around her place was now on a pole on her road.  Not only did she get her lifer Snowy, but it was a yard bird for her as well! Birders could only dream of claiming such a bird on their yard lists.

I went to go check it out.  My family wasn’t interested.  It’s hard for me to resist a Snowy Owl that is only 15 minutes away, though.  Plus I wanted to get a picture for Bonnie and for eBird.  Apparently this particular Snowy flushes at approaching cars, and the mailman had scared it off just minutes before I got there. I was undeterred and scanned the nearby fields and poles carefully.  My search paid off. Do you see the suspicisous white lump in the field below that caused me to grab my binoculars? 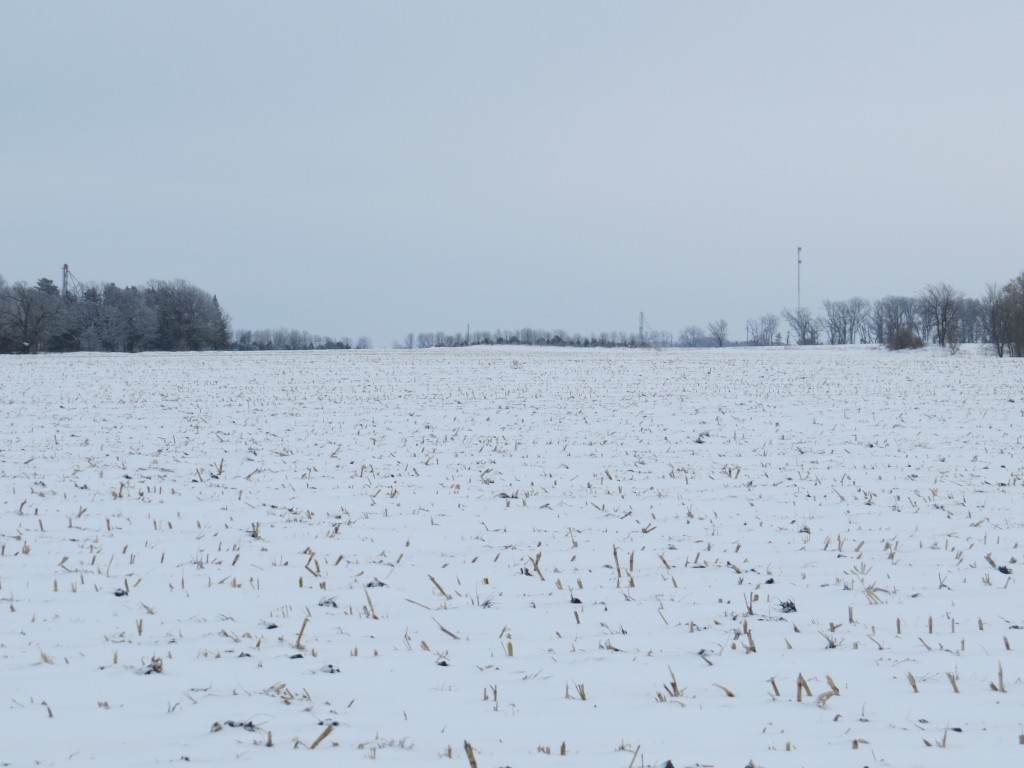 Can you find Bonnie’s Snowy Owl in this field near Grove City, Minnesota?

They blend in so incredibly well.  I’m sure I’ve driven by several already this winter and not known it. It was quite a thrill to “discover” this one nearly a quarter mile from the road on the ground.  Here is a closer view. 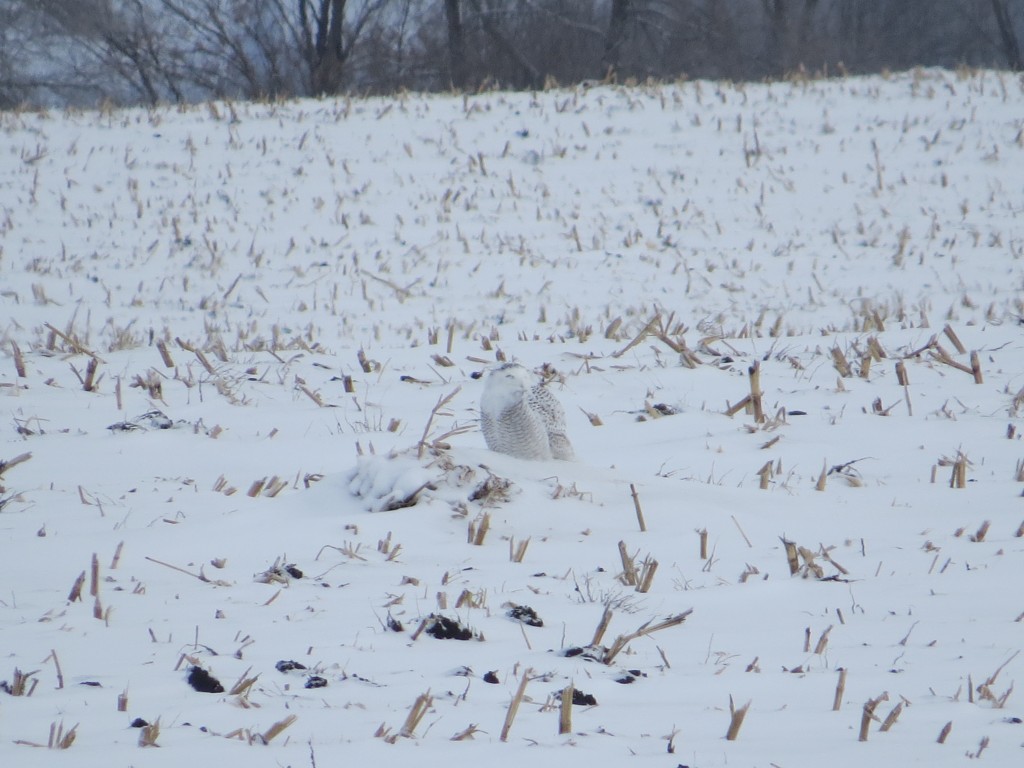 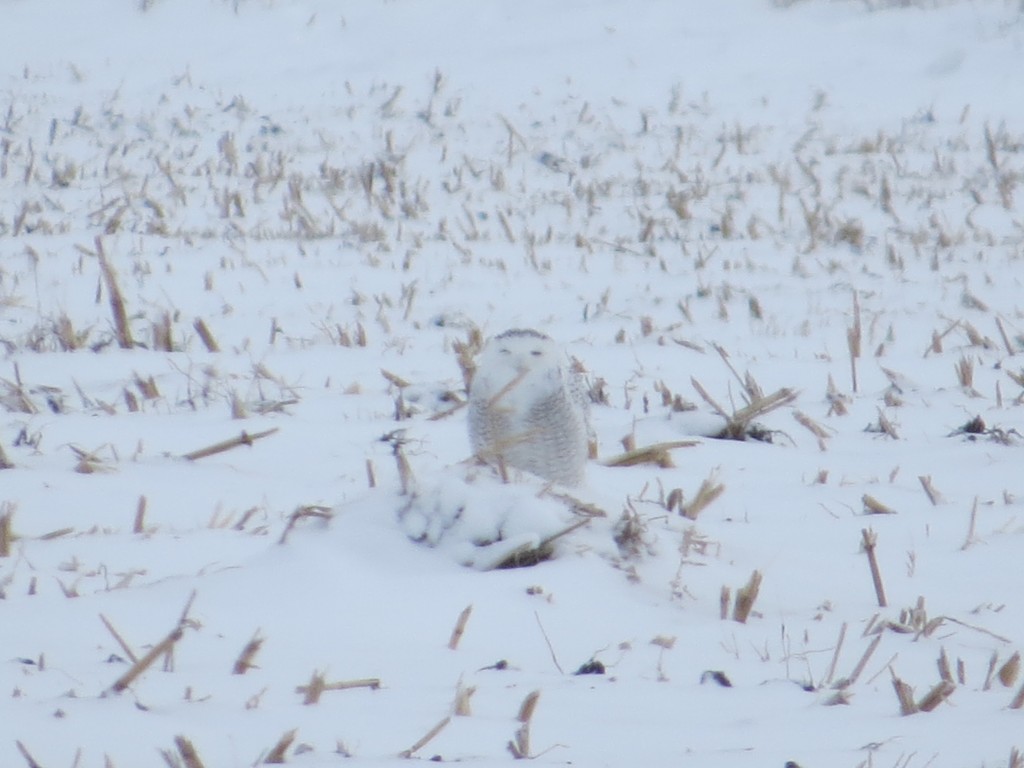 I waited for a long time, and eventually it flew back to its perch on the road. 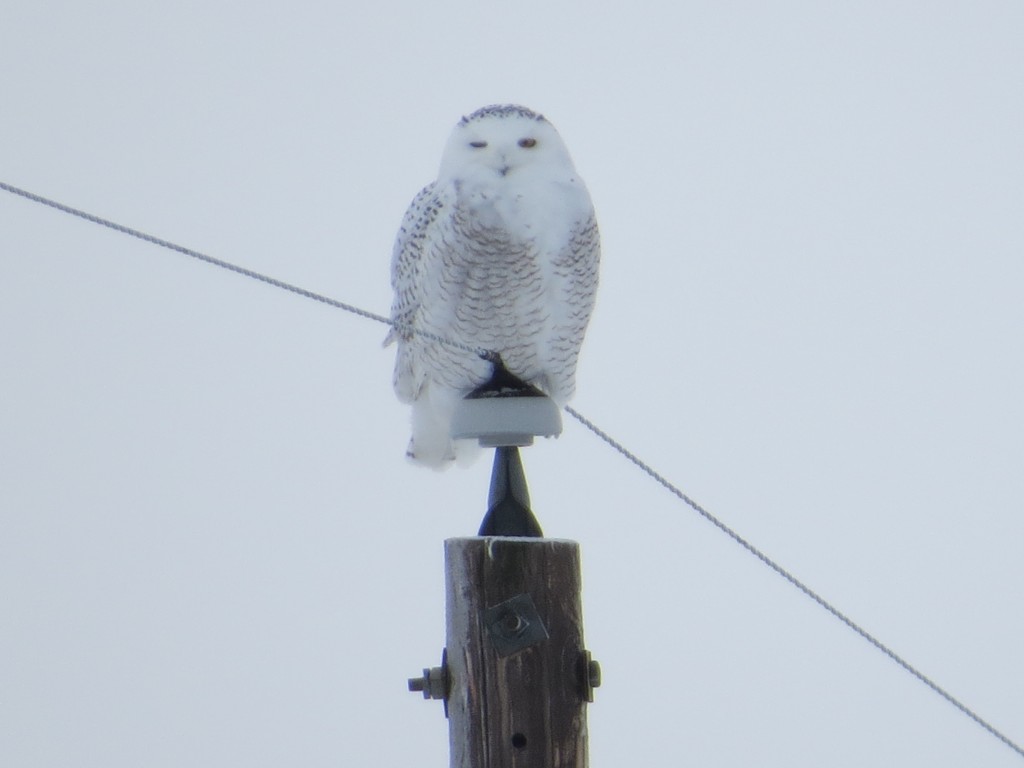 Bonnie’s Snowy on the perch where she could watch it from the comfort of her warm house.

I crept the car closer for a better photo which I have vowed to stop doing because this bird flew off. I tried to get some flight images of this fast moving, powerful raptor, but it was too much of a challenge. I enjoy the backdrop of this image, so I included it in the post. 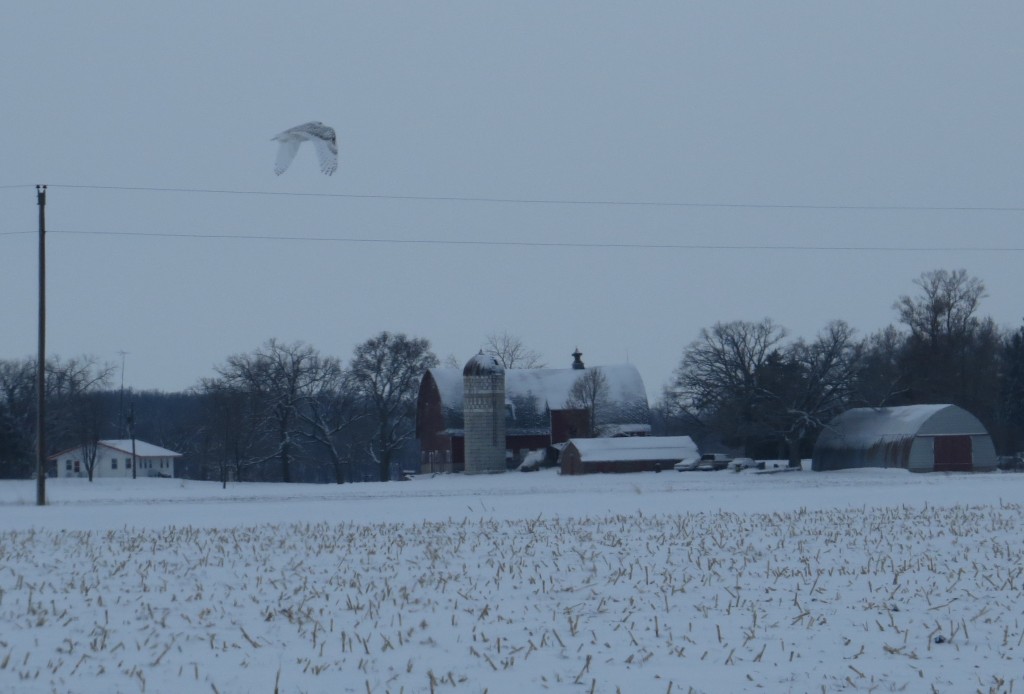 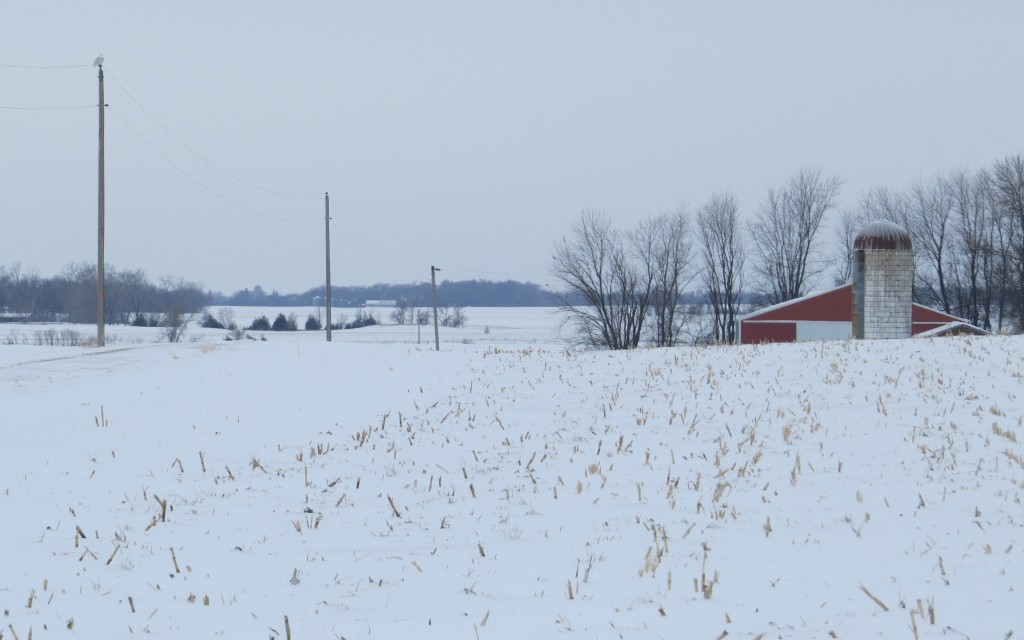 Can you find Bonnie’s Snowy Owl?

I tried to keep tabs on this bird for awhile, but I think my presence aggravated it enough to disappear from sight.  So, it was time to go home.  Besides, I had already missed enough of the New Year’s Eve fun that Melissa had planned for the kids.  I was worried that I had ruined the opportunity for some other coworkers that Bonnie had called out to come see her owl.  However, I was relieved to find out a couple days later that this bird was seen by them later that day.

I went back to work on January 2nd.  It was immediately clear to me that I should have checked my work email more often over the break.  I came back to find nearly half a dozen emails from coworkers who had seen Snowy Owls in the Litchfield/Grove City area! Wow!  The owl prowl continued! Much of the information was now a few days old which is a long time in the birding world.  However, a brand new report came in Thursday night. This one was from Kodi, our elementary principal.  She emailed me cell-phone pictures of a Snowy Owl she had seen on her way home from work that evening!  This was fresh information, so I planned to get out there at daybreak to see if I could find it. Because sunrise is so late, I literally had two minutes to search before I had to be at work.  I checked all the pole tops and didn’t have any luck.  I drove by there after work as well but struck out again.

Kodi’s Snowy Owl was significant because it was sighted in Kandiyohi County, which has been left out of the Snowy Owl fun all winter.  A couple of my friends have been waiting to add this bird to their Kandiyohi County list for quite some time.  One, in fact, has been waiting over a decade.  Kodi’s bird actually was the second Snowy Owl seen in our county that day as Randy found the first one – a bird that I was literally one mile away from the other day.  So the Kandiyohi birders were excited to go find one of these two owls.

It wasn’t until two days later that Joel rediscovered Kodi’s owl and finally got his Kandiyohi Snowy after more than ten years.  I got the call in the grocery store in Willmar when I was with the whole family.  They gracefully obliged me to go search for this owl, even with a car full of groceries, even driving on icy roads.  Steve and I arrived out there about the same time.  We drove and drove the roads and scanned the fields.  We could not locate it.  From reports we heard, the owl must have been there the whole time because it was seen just before and just after our search.  Frustrating.

I had to try again in the morning.  Though it was brutally cold and all the area churches were closed for cold and treacherous roads, I was out there.  I was about the only person dumb enough to be out and about.  But my search paid off as I located the owl on top of an irrigator over a quarter mile from the nearest road. 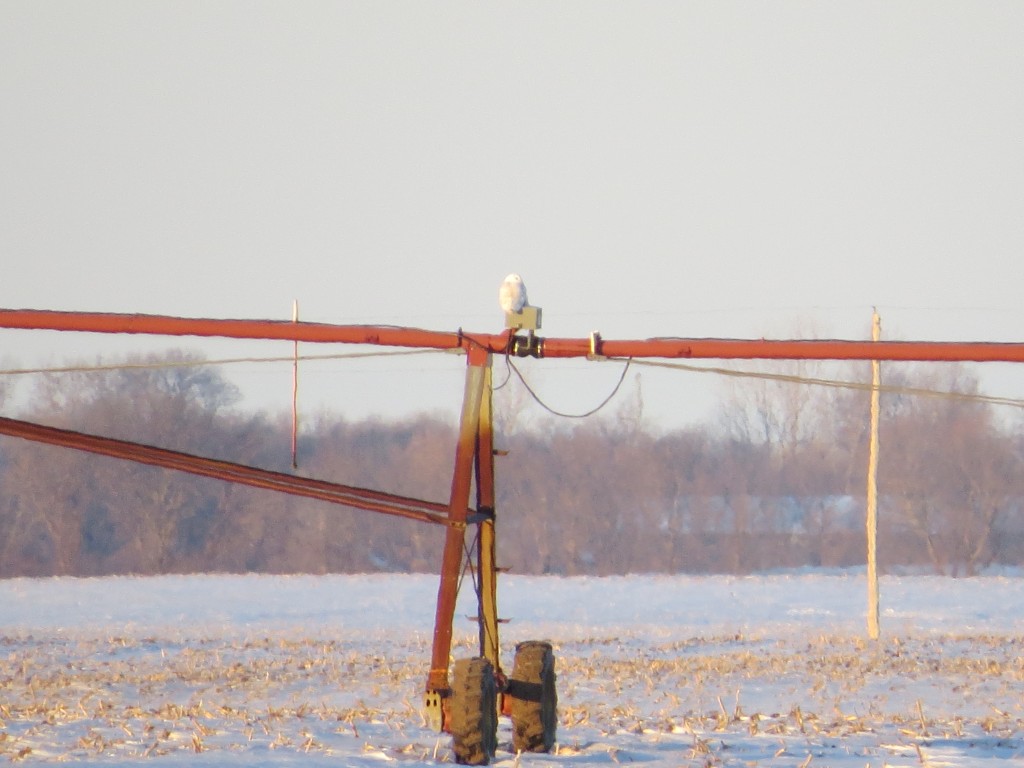 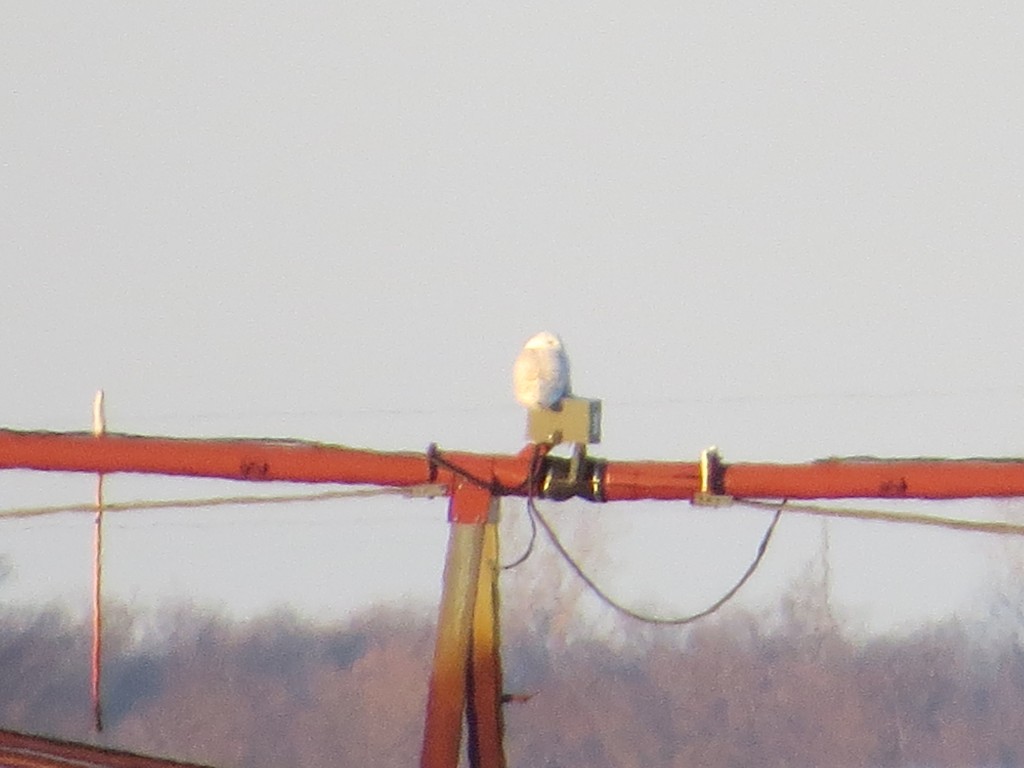 This is the best photo I could muster from a quarter mile away.

At least a half dozen birders besides myself got to see this owl. I am thankful for all the reports I’ve gotten from coworkers regarding Snowy Owls.  They have put Meeker and Kandiyohi Counties on the map in the birding world.  Without them these two counties would be very quiet during this Snowy Owl invasion that is playing out across the country.  Now the Atwater-Cosmos-Grove City area is one of the “hotbeds” of activity, sending all kinds of birders to our backroads to prowl for owls.  I personally have seen 4 of my 6 Snowy Owls, including my lifer, because the people I work with have let me know about their sightings. The best part, though, is watching their enthusiasm as they see one of these magnificent visitors for the first time.