When there are all kinds of family members to visit Up North, it is very difficult to get away to do any serious birding. This is a tough truth to accept when there are so many incredible finds in the northwoods. One way to get in some good birding and visiting is to watch the feeder action at those relatives’ houses. One thing that was interesting this year was the concentration of American Goldfinches wherever we went. There was one bird that was considerably larger than the finches and required a bit of study. It turned out to be an immature White-crowned Sparrow. It doesn’t look like much, so big deal, right? Well, it is a big deal because these birds have migrated through Minnesota long ago. They aren’t suppposed to be in Minnesota right now, let alone the very northern part of it. It was a good find and one that I reported to eBird.org. 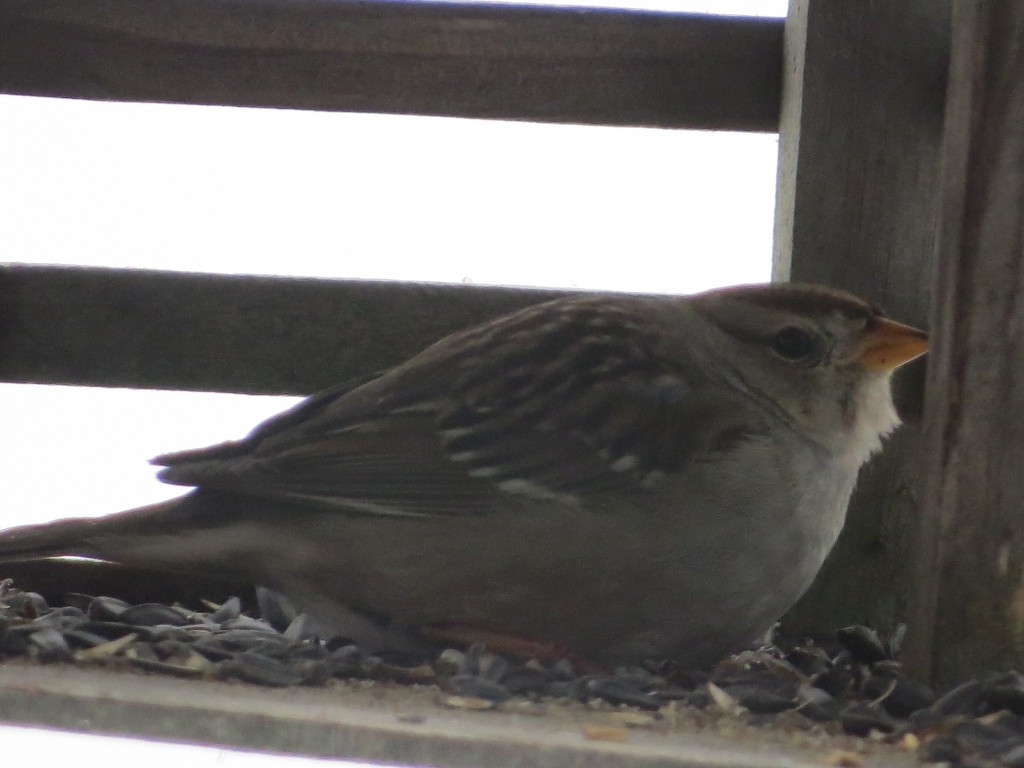 One day that we went to Melissa’s grandma’s house, I asked her grandma if she had any grosbeaks show up.  She told me that there were a half dozen or so Evening Grosbeaks, or the “yellow ones” as the locals say, that appeared just a few hours before we were there.  So I watched the feeders but never saw them.

I’ve been learning that the Evening Grosbeaks are somewhat of a prize even for us northern birders.  Apparently their numbers are way down. This was both sad and surprising to me as I remember both them and Pine Grosbeaks covering our feeders when I grew up.  They were practically pests.  Though I’ve seen this bird plenty in my life, I wanted to make sure I got a photo of one.  This trip Up North would be my last opportunity for the year, so I told Melissa’s grandma I was coming to see her the next morning.  I even brought Melissa along.  Grandma’s house was nice and cozy warm from her wood furnace on this sub-zero day, and there is always a hot pot of coffee and treats on the table.  That makes for some pretty good bird watching. 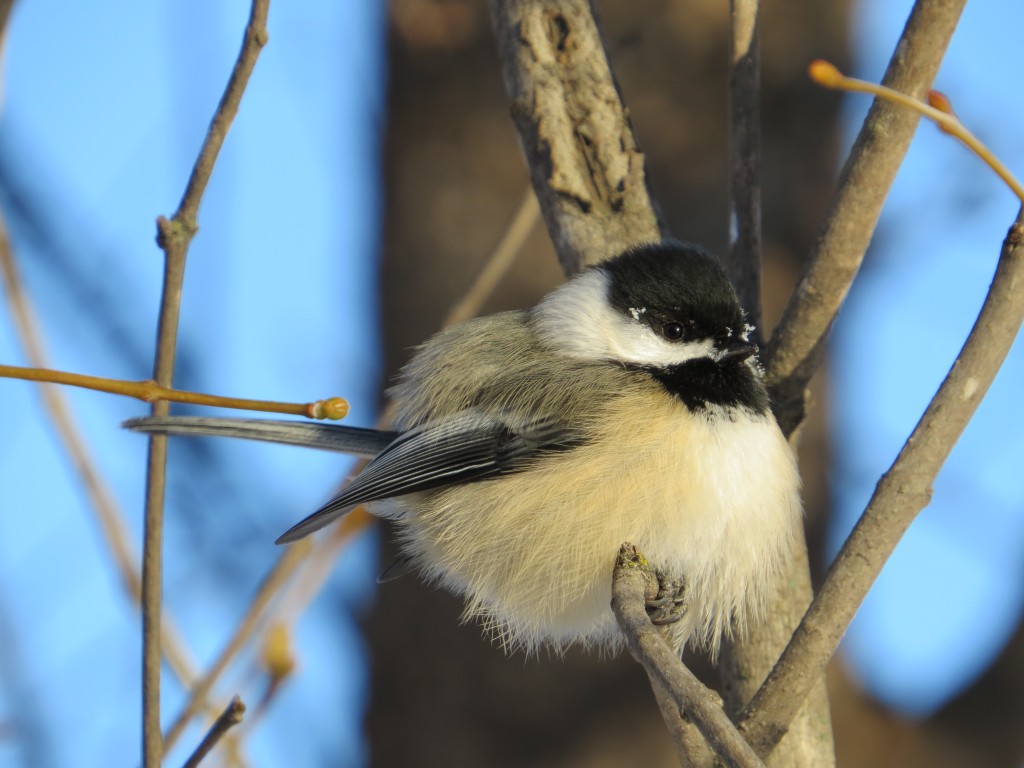 The ever-present, friendly Black-capped Chickadee. I was 2 feet away from this bird for this picture. 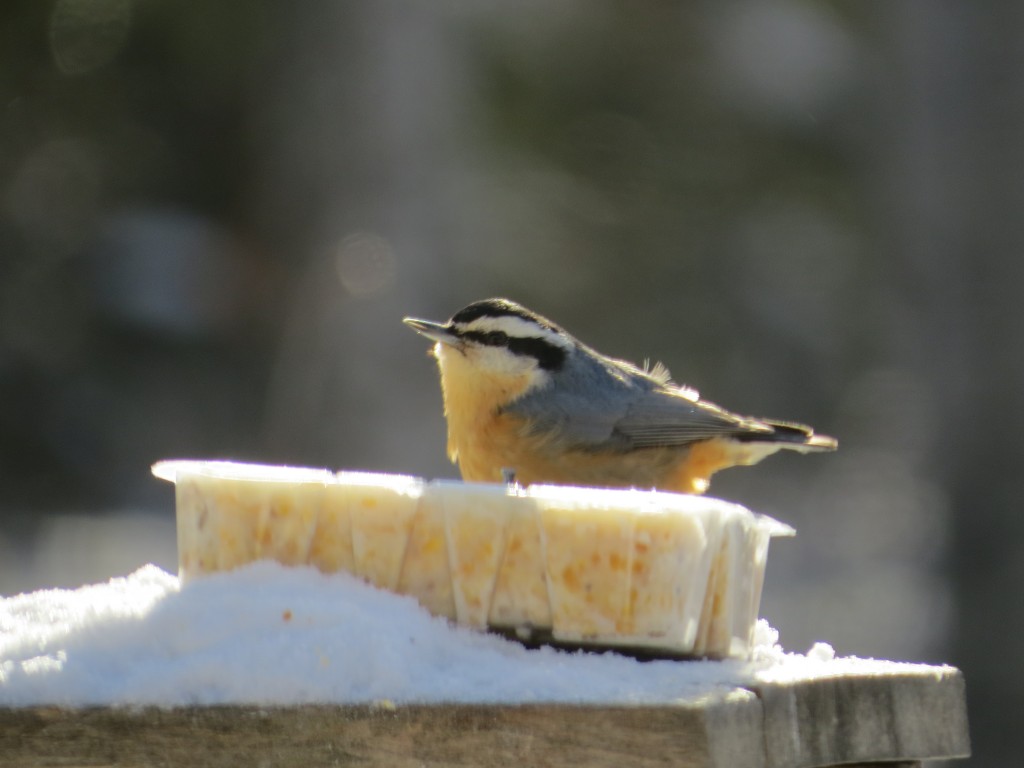 As I watched the feeders I also kept an eye on the trees across the yard.  Eventually I saw a couple of bigger, yellowish birds moving around in the far-off tree. 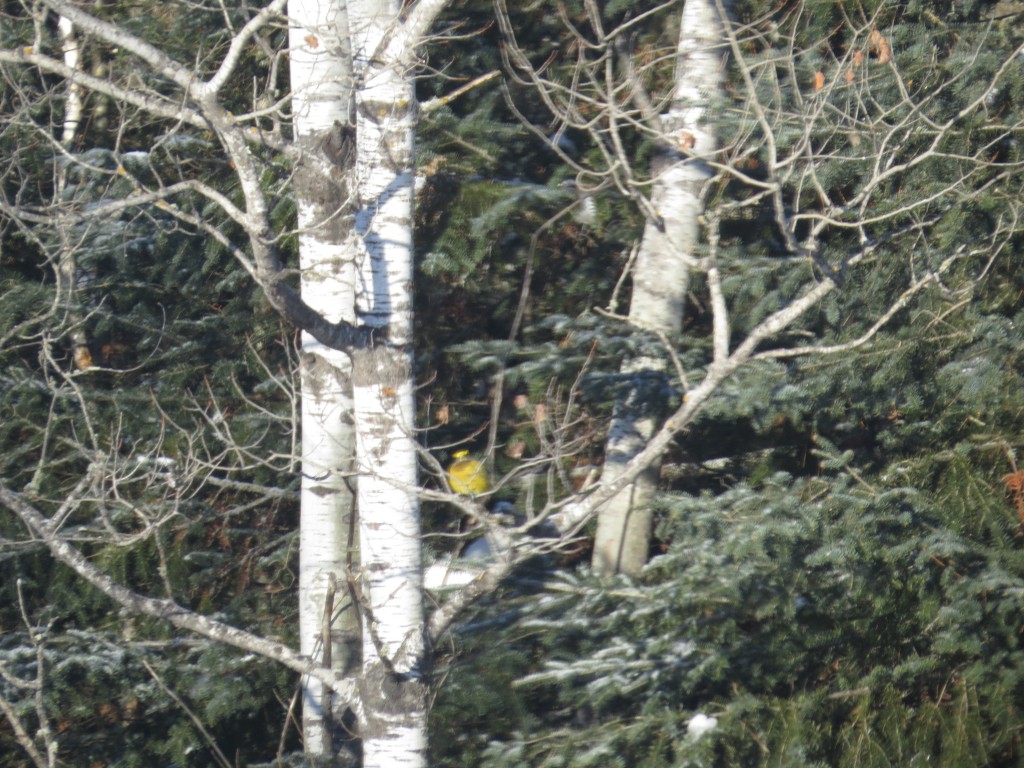 It was a male Evening Grosbeak – the one I was after today.  He and a female companion eventually flew in to the feeders. 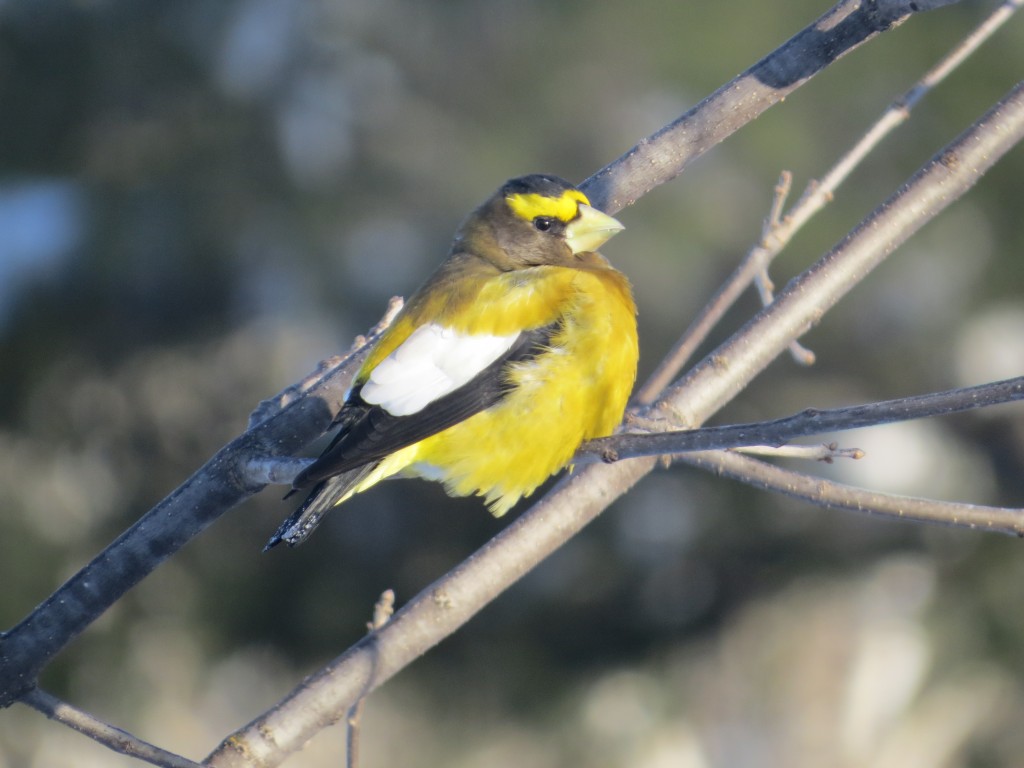 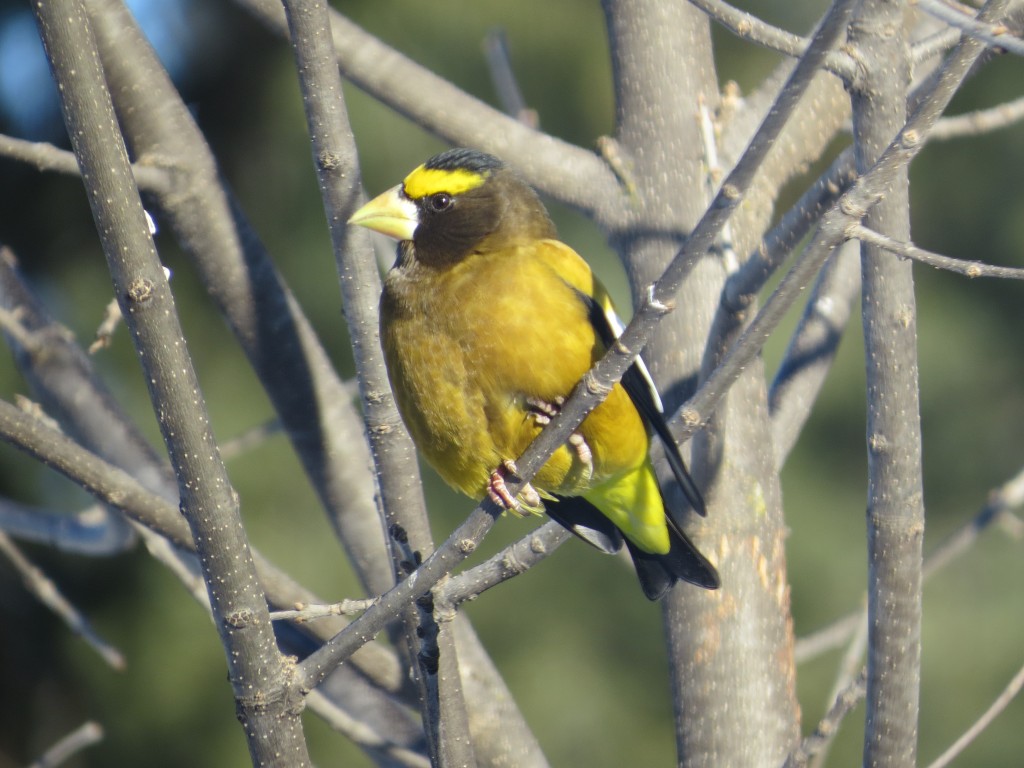 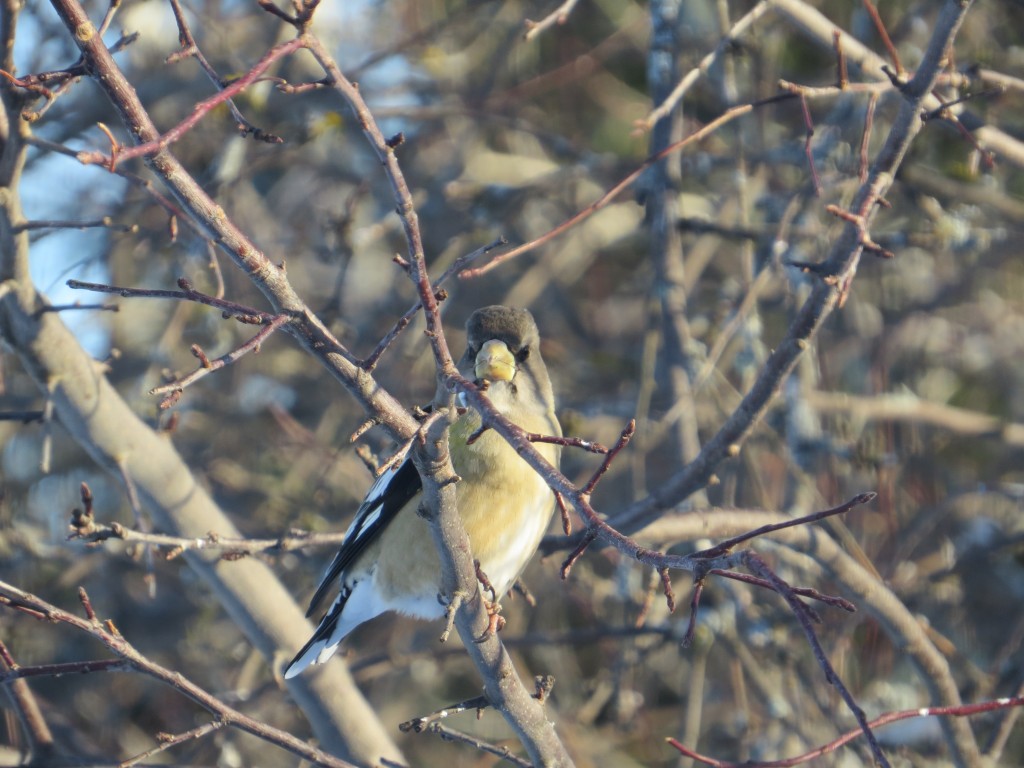 It felt good to get a picture. The trip over to Grandma’s would have been worth it even if we struck out.  It’s always fun to see Grandma.  As we continued to munch on treats and sip coffee, more Evening Grosbeaks came in.  There ended up being 7 birds – 4 males and 3 females. 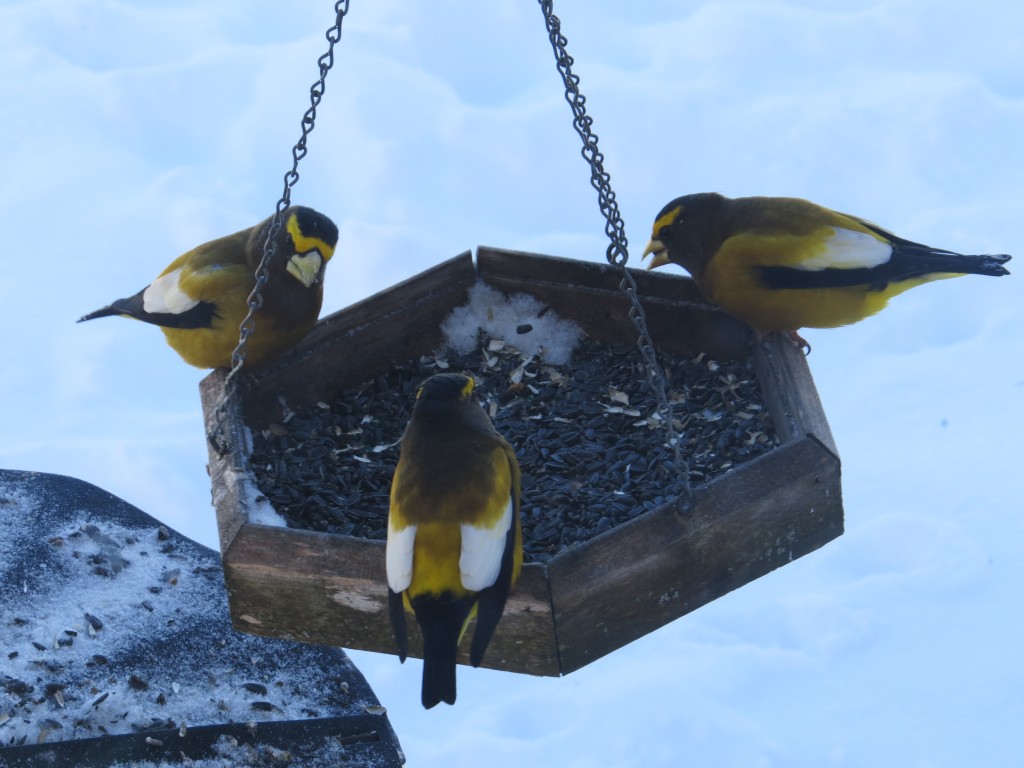 Eventually we left Melissa’s grandma and went back to our parents’ houses to see them again and get packed up for our trip home the next day.

That next day came, and it was cold!  But we had to get home.  We had already extended our trip one day because of the cold temps and a blizzard back home. It just so happens that the Sax-Zim Bog is on our way south.  We wouldn’t have time to explore the Bog since we were just passing through on County Road 7 that runs north-south.  Besides watching for birds, we kept watching the van thermometer drop. It bottomed up in the lowlands of the Bog at -33. 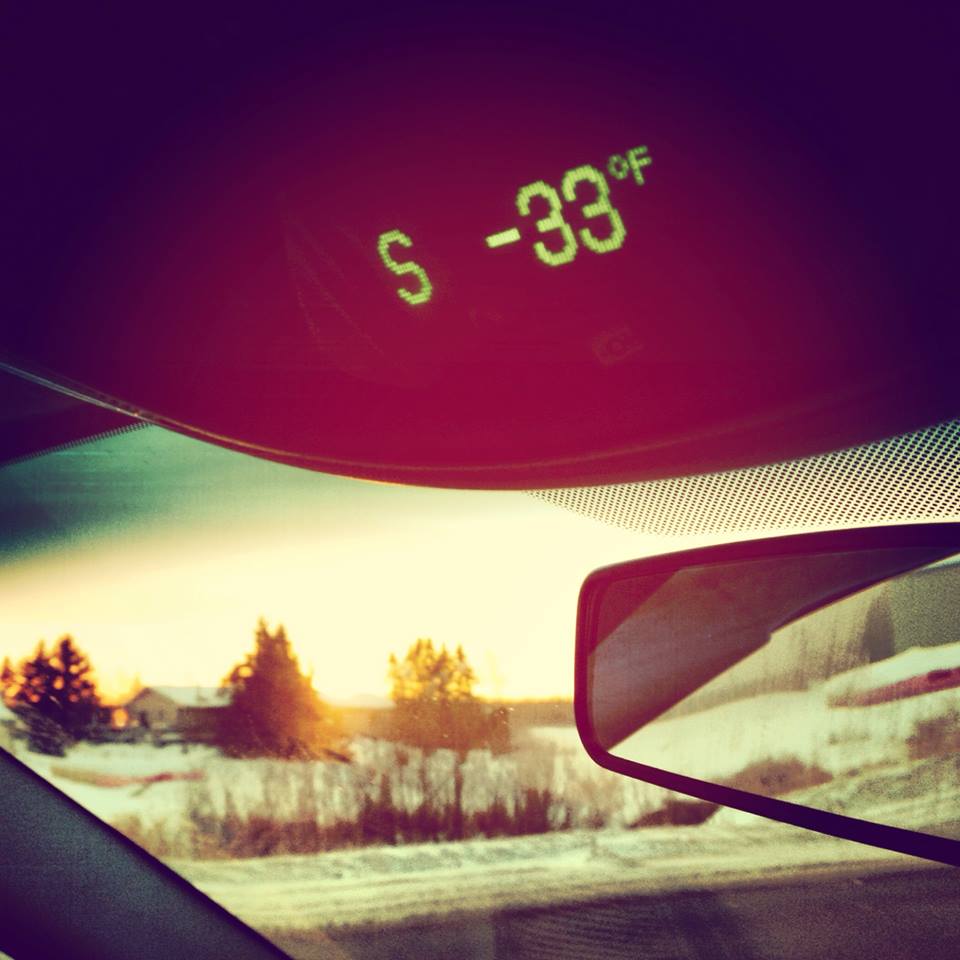 As we birded County Road 7 at 55 MPH I spotted a good bird – another Northern Hawk Owl.  It was only identifiable by sillhouette since it was so far from the road. 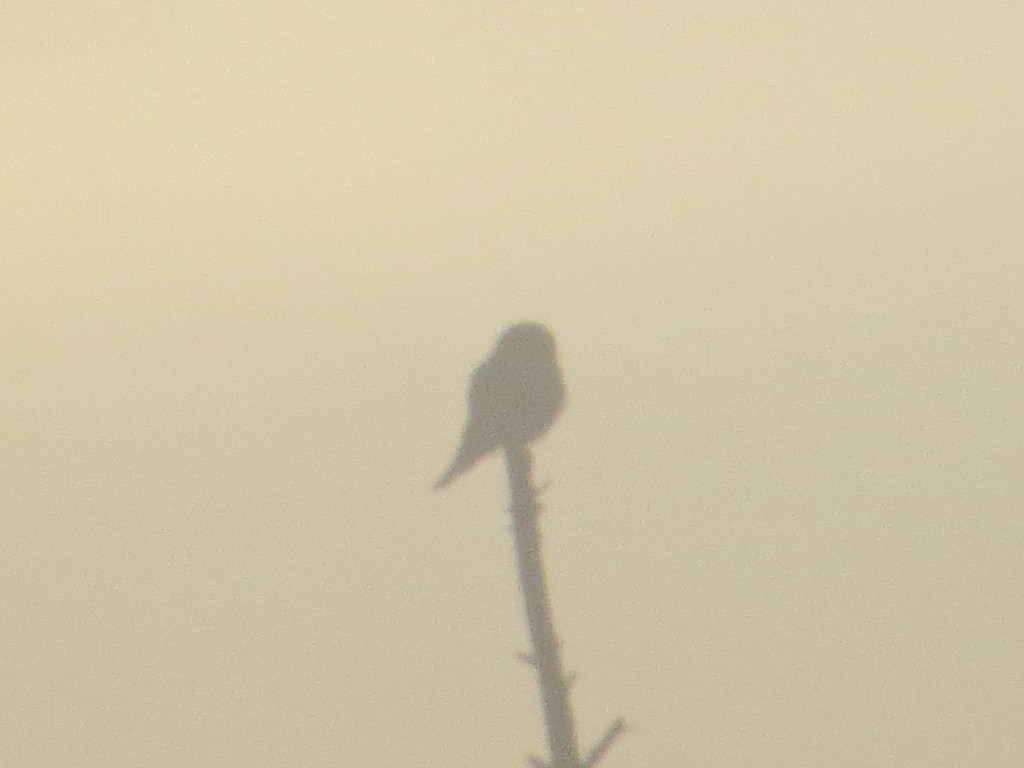 Sometimes it’s okay to not see the fine details of a bird.  Taking a step back and looking at the bigger scene playing out can be just as much fun. 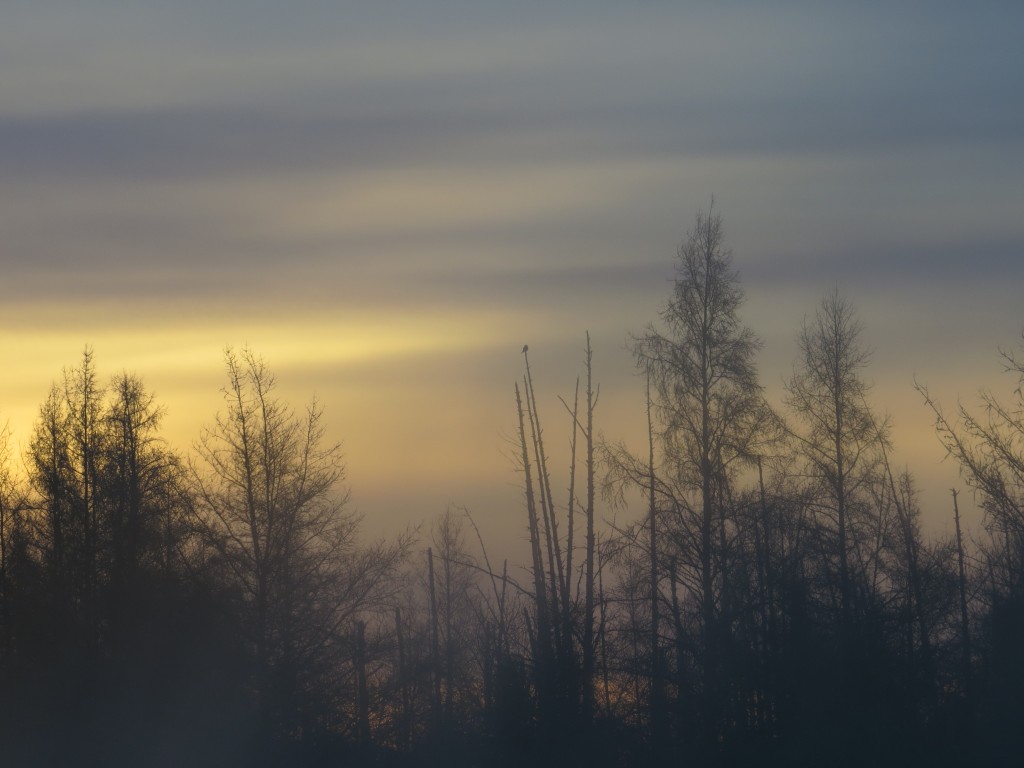 Sunrise in the Sax-Zim Bog – Can you find the Northern Hawk Owl?

As we motored along we flushed up a pair of reddish birds who were on the snowbank by the shoulder.  I recognized them as Pine Grosbeaks. Again, this was a bird I’ve seen plenty, but I have not yet photographed them.  It looks like I’m going to have to wait until next winter to get a good photo, but you can at least see what they look like here. 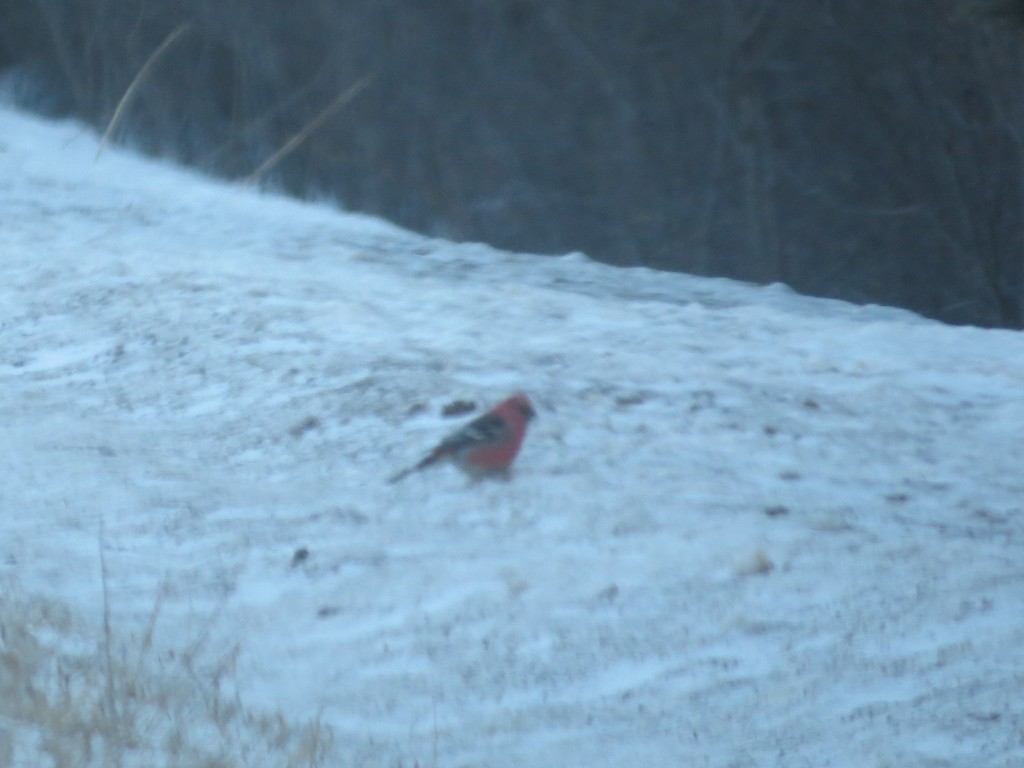 Sadly we exited the Bog and got back on the freeway.  Of course I had to make a quick detour in the town of Cloquet to look for a Snowy Owl that was reported on a Catholic church the night before.  No luck.

Another detour I had up my sleeve was to go by Grove City when we were very close to home.  A coworker had texted me the night before that a Snowy Owl showed up right near her house.  As we checked out the site and found nothing, I checked my messages.  This same coworker texted me that her husband had seen a Snowy about 7 miles away near Litchfield just a couple hours before! 7 miles is nothing, but we had just come to the end of a 265 mile trip.  Though the family was travel-weary, they obliged me by letting me go take a look.

We got out there, and the owl was still on top of a power pole! That made for a 12 owl trip! It was fun to hear Melissa and Evan say, “Yep, I see it!” after I initially spotted it. There is something exciting about owls to birders and non-birders alike. 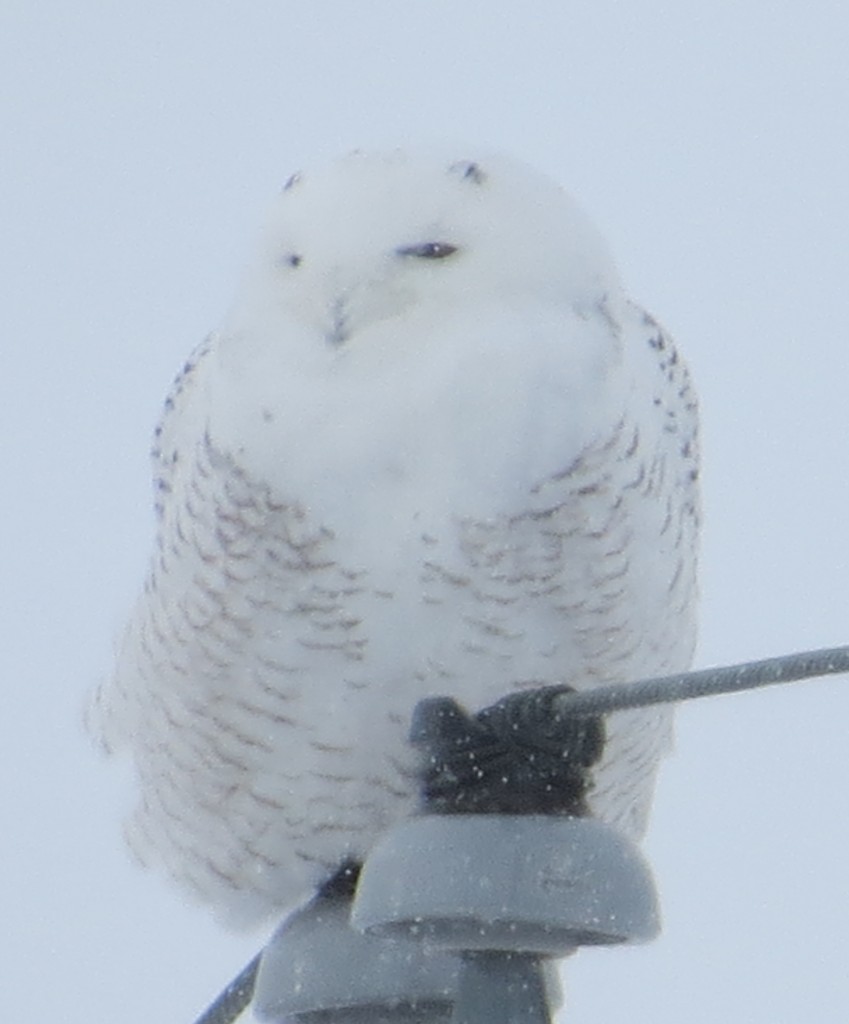 Sadly I tried to creep the car a little closer on the crunchy snow of the shoulder for a better picture of the owl, and it spooked. I never did refind it.  I was really mad at myself for being so foolish.  It’s not good to disturb these birds as they need to conserve their energy since they’ve just come from a very long journey from the Arctic.  Plus I may have disrupted it while it was hunting.  And, other birders now wouldn’t get to see it.  It was a bad choice on my part. I was happy to hear a few days later that one of my coworkers refound this same bird a mile to the north just an hour after we had seen it.

Seeing a Snowy Owl never gets old, and this was a fitting finish for an epic trip.  Though this trip was now over, the Snowy Owl fun has continued. Be sure to check it out in the next blog post.