Though it was a tremendous thrill to get our Northern Hawk Owl lifer on the epic Great Gray Owl outing, it kind of negated the need to go to the Sax-Zim Bog.  That is where we were supposed to see this bird.  But the Bog is the Bog, and its allure is just as strong even if you’ve seen all the birds in it.  And the truth is that we hadn’t.  We still needed a Boreal Chickadee, Northern Goshawk, Black-backed Woodpecker, and American Three-toed Woodpecker.  None of them felt as urgent as that Northern Hawk Owl, though.  Even with our owl sighting, we decided to continue on with our Bog plans.  Now, though, the priority shifted to finding the Boreal Chickadee, a reliable find in the past couple weeks at the feeders on Admiral Road. And since we’d seen all the “big-game” birds, Evan wasn’t interested in going along to the Bog.  Maybe that had more to do with the fact that he had cousins and a new iPad to play with.

So it was just my dad and me that ventured into the Sax-Zim Bog early one morning.  I should say that I dragged him along as he usually accompanies me on these northern birding trips.  Unfortunately we didn’t have a lot of time to go birding today because of family holiday plans, but we had enough time to get in some good birding.

Dad and I got down to the Bog before daylight and actually had to wait in the parking lot of the McDavitt Town Hall until it was light enough to see. It felt good to be in the right location knowing that we could start as soon as it was light. It was also nice to visit for a bit.  Dad told me all about a non-fiction book he’d been reading on the great Hinckley fire of 1894, a conversation that was triggered by the McDavitt Township sign indicating it was founded in that same year.  The details he told me were amazing and made me want to pick up this book myself – maybe when/if the birding ever slows down.

Finally it was daylight, and we crept south along Admiral Road, watching carefully for any Great Gray and Northern Hawk Owls. We got a few miles down the road when I spotted the first owl I had ever seen in the Sax-Zim Bog – a gorgeous Great Gray. 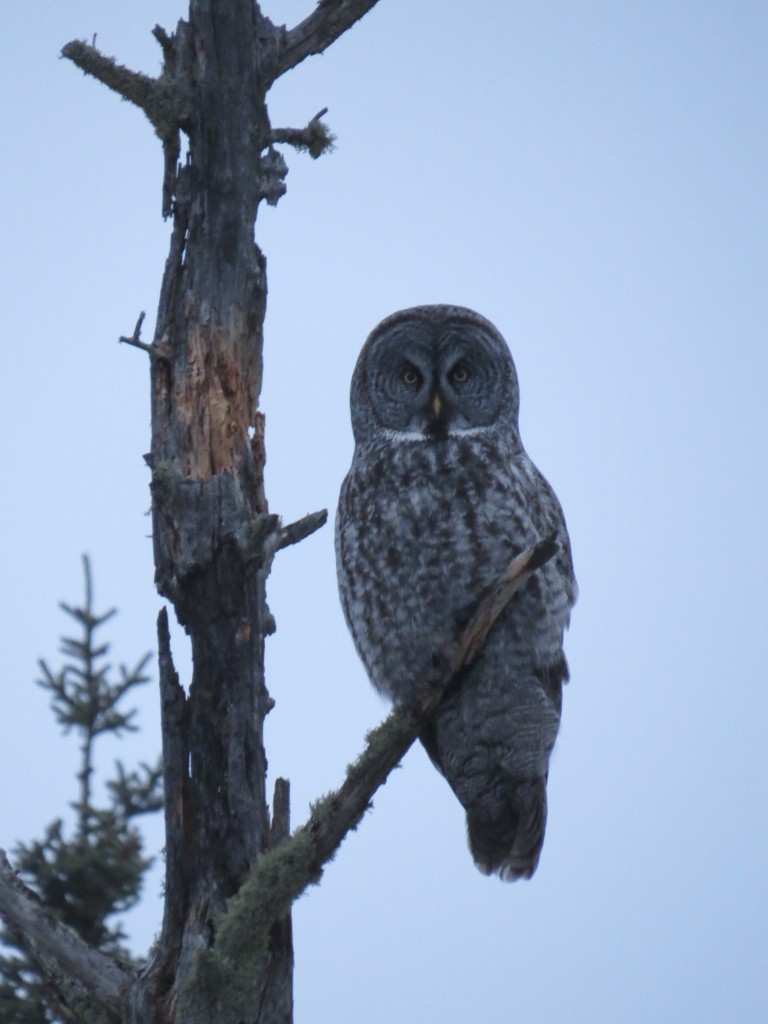 Great Gray Owl on Admiral Road in the Sax-Zim Bog

Here is a wide-angle shot of this bird.  My mom should appreciate that as she has always complained that movies rarely show wide-angle views.  I’ve started taking at least one picture like this when I find a good bird because I think seeing them in the overall context of their surroundings is just as much fun as a close-up. 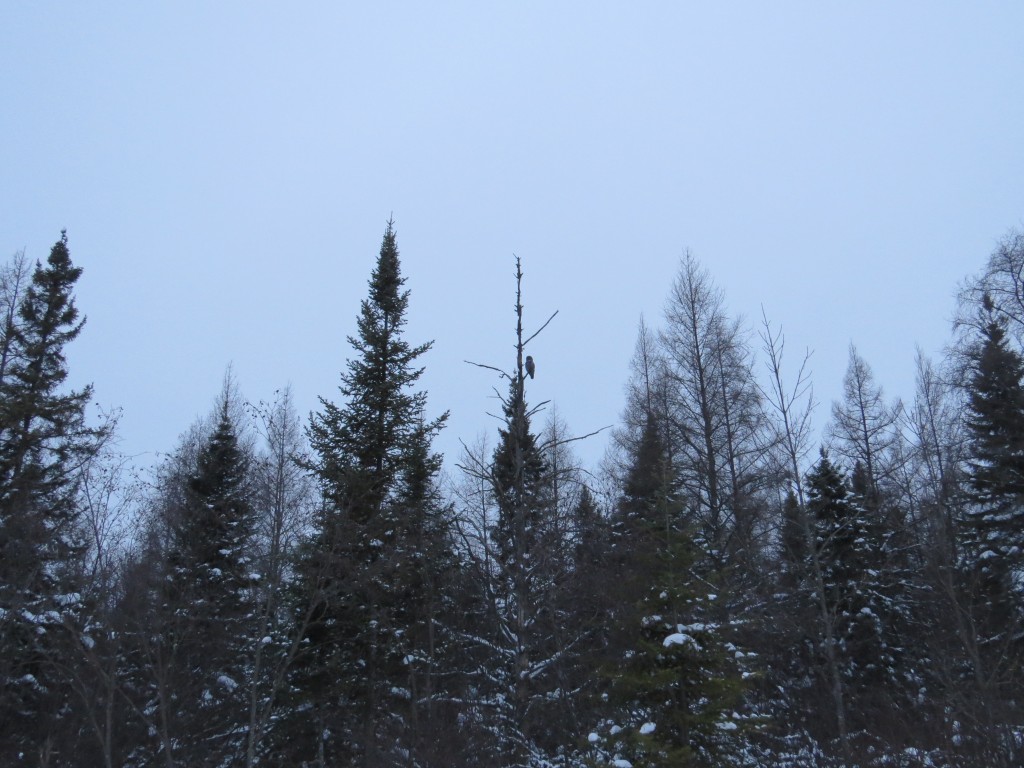 This guy was about 20 feet up, and the only reason I was able to get a photograph of it was because he was against the light sky.  Down below in the “tunnel” through the trees, it was still quite dark, making photography pointless.  You can get a sense of that darkness in the photo above. We watched this owl for a bit and never got out of the car to photograph it.  As soon as we got a couple photos we got out of there for two reasons. One, it’s good to leave owls alone so they aren’t disturbed while they are hunting, which is critical in the winter when food is more scarce and they need to conserve energy.  Two, there were other birds we wanted to see in our limited two hours of Bog birding.

We didn’t have to travel long to our next stop which was the feeding station on Admiral Road which has been set up and maintained by birding guide, Mike Hendrickson.  This is arguably the best place in the country to find the elusive Boreal Chickadee. We’ve been by these feeders before, but we’ve only driven by them slowly.  This time I took my friend Steve’s advice to just sit and wait, even for a long time.  Eventually they will show. So we did that, and we were treated to 5 noisy Gray Jays and a few of the more common Black-capped Chickadees.  But then it happened. Not one, but two Boreal Chickadees showed up! This was a life bird for both my dad and me.  How I wish the light conditions were better as I always like to get a nice picture, especially of a life bird. Alas, this shot will have to do. 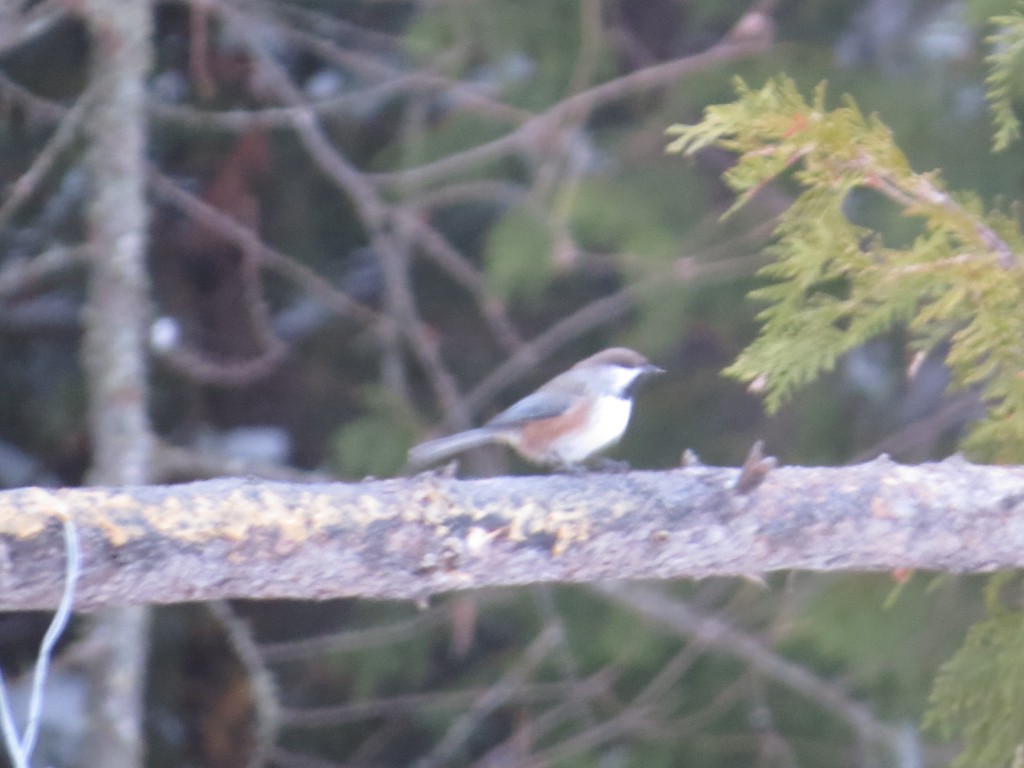 We were now down to about an hour left to explore the Bog.  We had barely covered much ground.  Now it was a matter of deciding what to go after.  Dad had never seen a Northern Hawk Owl, so I headed the direction of one that had been seen reliably recently. We got to the site on – get this – Owl Avenue, and we saw a promising scene. There were two parked cars with three men outside.  I pulled up and asked what they had seen.  They said they hadn’t seen anything but were just waiting in the location of where this owl had been reported. I was inclined to not believe them as birders can be very secretive and protective of their owls.  We scanned the trees all around them and couldn’t find anything, so we drove a bit further before turning around to go past them again.  This time, though, I saw a big bird at the top of a dead spruce directly across the road from these guys.  It was the Northern Hawk Owl!  Seeing it again was no less of a thrill than before, and it was cool that my dad got to add this owl to his life list. 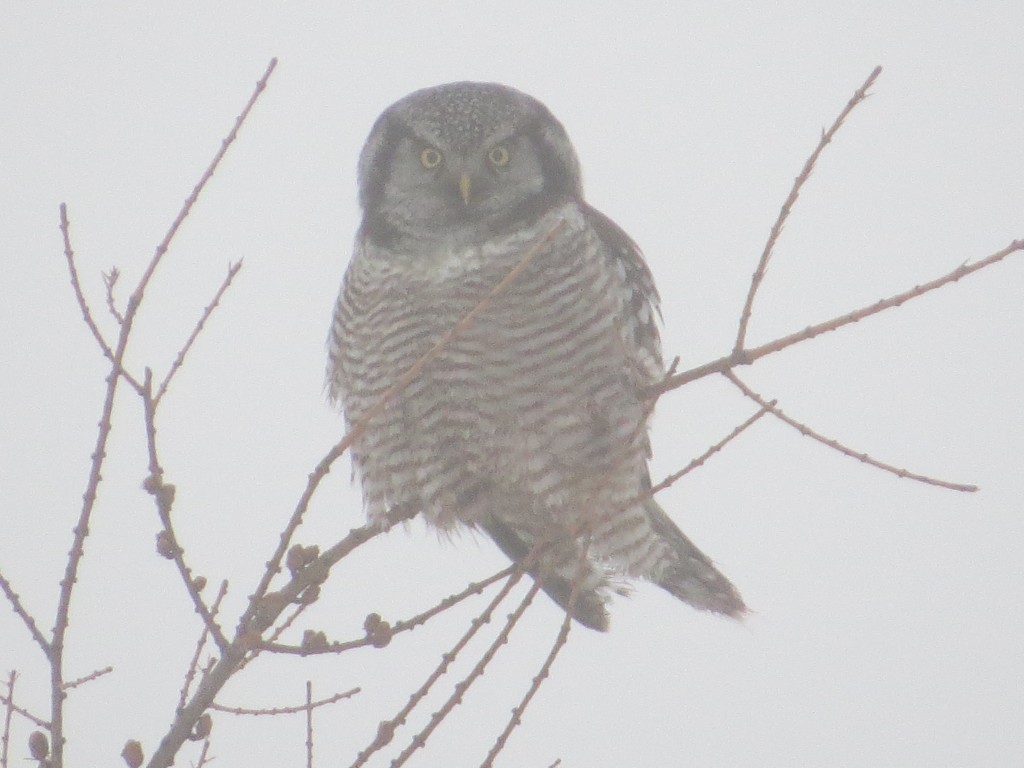 Even though there was more daylight now, you can see how incredibly foggy it was, making photography impossible. 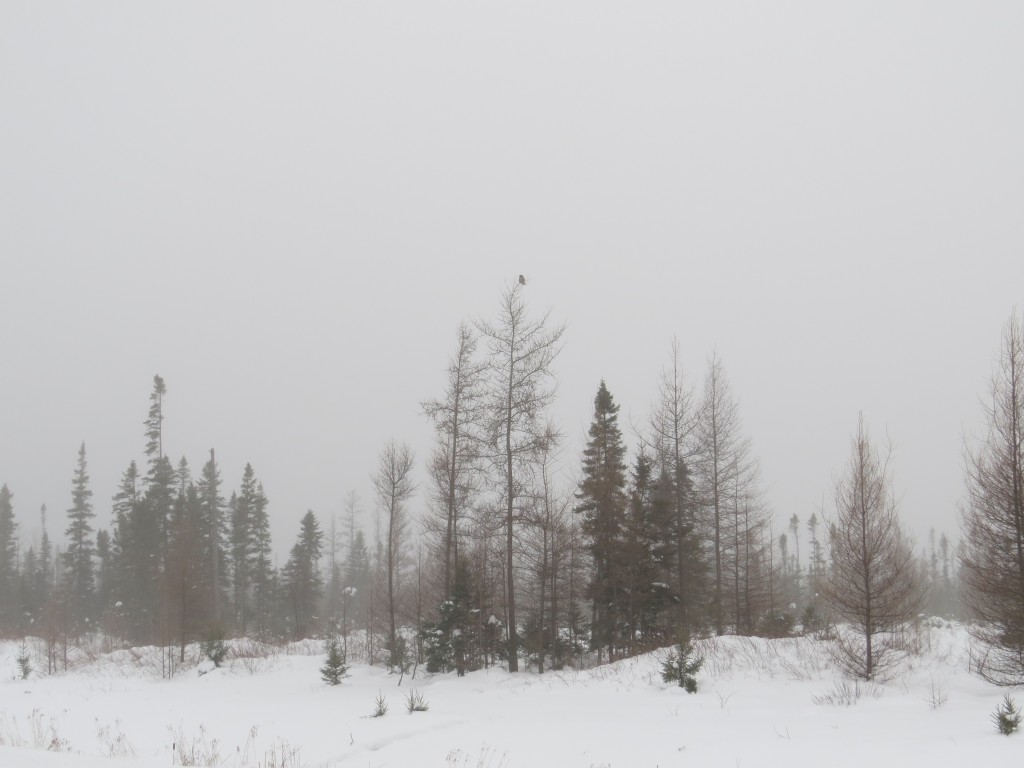 As I turned the van around to get in position to photograph this bird, I got stuck! It was a terrible feeling.  Not only was it embarassing, but the ruckus of trying to get a vehicle free could scare off this bird and ruin things for other birders. The three gentlemen came over right away and pushed.  We were out.  As I thanked the guys, the one told me the owl flew in just after we left them the first time. Oh, and that owl watched us the whole time, not bothered at all by what was happening below.

By now we’d used up our allotted time in the Bog, and we had to head back.  It was a very quick, productive trip with some big highlights.  Anytime you can see two northern owls, get a life bird (or two in my dad’s case), and share those experiences with your dad is a good day. I can’t wait for the next time we explore the Bog again together.