Anyone in the birding world knows that this has been the year of the Snowy Owl.  An irruption has been taking place all across the northern half of the country, and Minnesota is no exception.  It seems each new day brings a new Snowy Owl sighting.  When I got my lifer on December 3rd, that bird was only the 5th one to show up in our state.  I’ve since lost track of the number of sightings, but it is in the twenties or thirties.

Apparently I’ve been talking about Snowy Owls a lot because Marin has picked up on my interest.  The other day when Evan and I were at Cub Scouts, Marin was watching Sofia the First on Disney Junior when she saw a Snowy Owl on the show and excitedly exclaimed, “Hey! A Snowy Owl! My dad likes them!”  It should be noted that the television show never mentioned the bird species, so this papa’s pretty proud.

Since Evan didn’t get to see the Snowy Owl I did a few weeks ago, I told him that we would chase the next one that was close to us so he could get his lifer.  I was confident it wouldn’t take long.  It turns out that all kinds of owls have been popping up to the north of St. Cloud, which is only an hour-and-a-half away.  Schedules haven’t permitted us to get up there until just recently. Last Thursday Evan was on his 4th day of a sore throat, so we kept him out of school to go get a strep test at the doctor. With a negative test and a kid who was feeling somewhat perky, the kids and I headed up to Sauk Rapids to check out a Snowy Owl that had just been reported the previous evening.   I made a cozy ride for them, complete with pillows, blankets, and a dual-screen DVD player in the back seat.

Marin was excited to see a Snowy Owl too and was very eager to be on this expedition. When we got to St. Cloud, she said, “Dad, when are we going to see the Snowy Owl?”  I then had to explain that we might not see one.  That’s a tough concept for a three-year-old.

We got to the reported site, and the owl was right there as described.  Perhaps the only difference was the exact power pole it was perched on.  I pulled over well away from the owl so as not to spook it.  I snapped some pictures and then drove by it slowly so the kids could watch it.  As we went by, the owl turned its head and followed our movement to which Evan exclaimed, “Dad, he looked at me!” 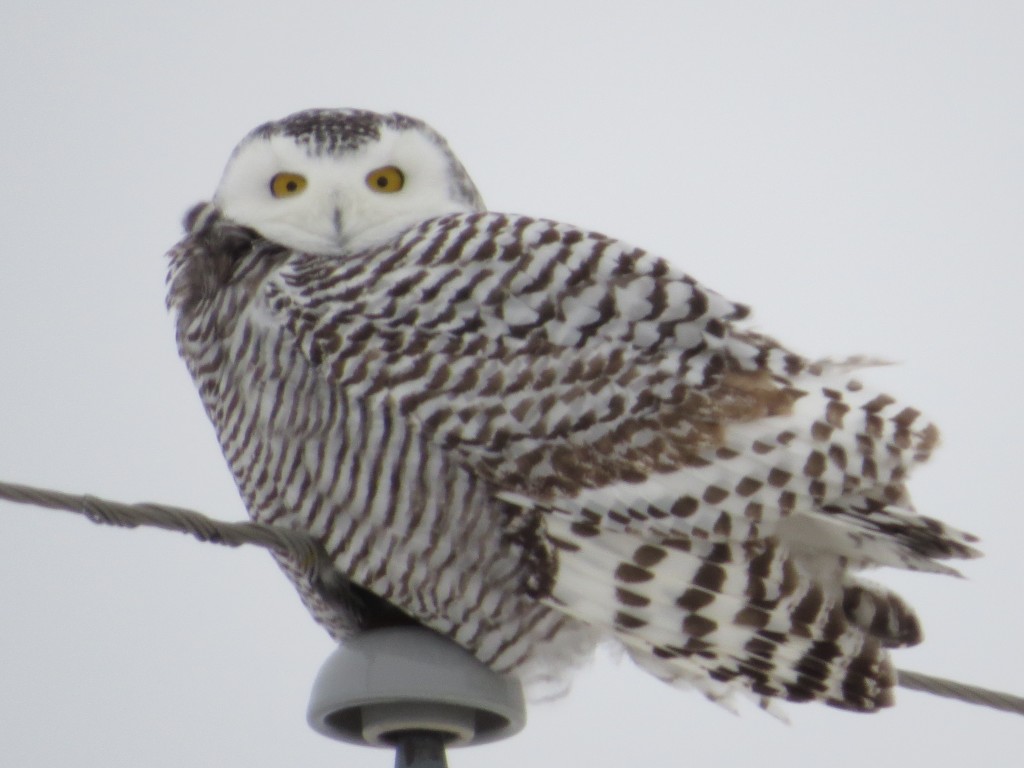 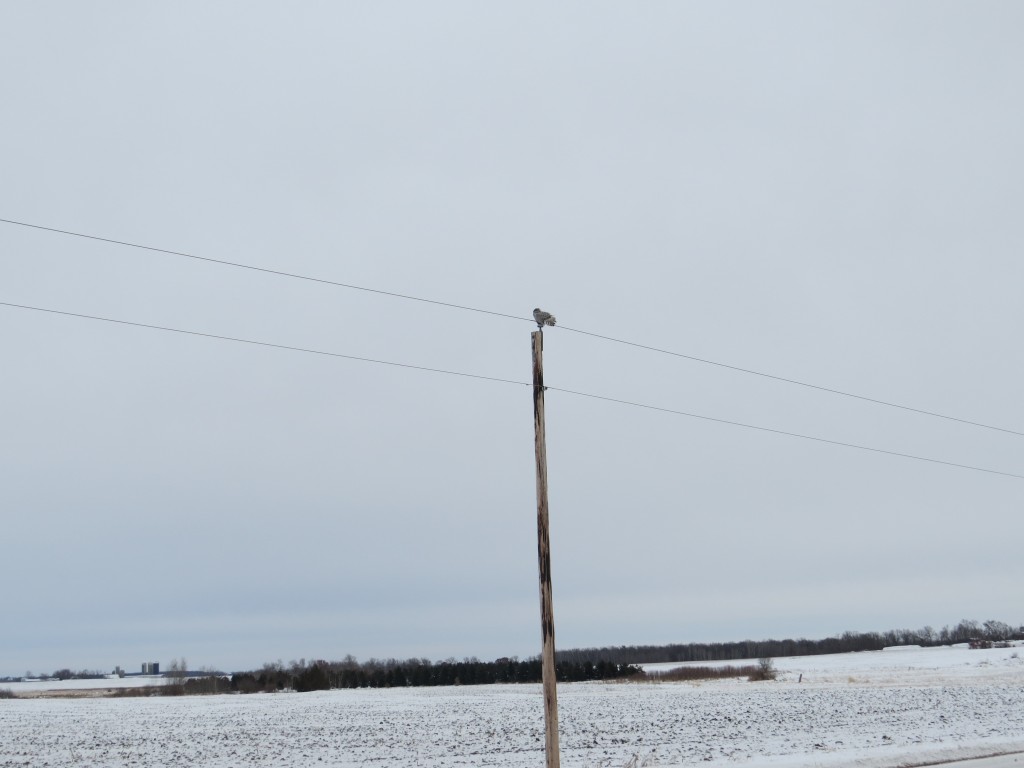 Actually, Evan, this is a “she” and a young one at that as indicated by the heavy black barring.  Shortly after we saw the owl, Evan complained about an earache.  I asked him to hang on a little longer while I drove to another nearby site to see if I could find another owl.  No luck. I was hoping to check out some more sites, but we had to go to Target to get some Tylenol.  After some Tylenol, a bathroom break, and a treat we went back out to this owl for some more photos.  Then it was time to go home.

Despite having a succesful trip and getting both kids their Snowy Owl lifer, I wasn’t satisfied.  There were about a dozen different birds that had been reported in the tri-county area of Stearns, Benton, and Morrison Counties.  I wanted to put up a big number.  Luck would have it that two days later my wife was having some girlfriends over at the house for a get-together and needed us out of the house for a couple hours.  It was the perfect opportunity to head north again.

Once again I made it a fun ride. The kids were in their PJs, we rented some new movies, and we packed in the pillows and blankets.  Mom was happy, kids were happy, and Dad was happy.  Once we got to Royalton, I drove from site to site of reported Snowy Owls from the previous week.  And the result was always the same. Nothing.  This is always a possibility when you chase birds, especially on week-old intel. However, I had just gone by the last site and was heading home when I finally found one perched on a power pole along someone’s driveway just west of Holdingford.  And boy, was it a beauty. 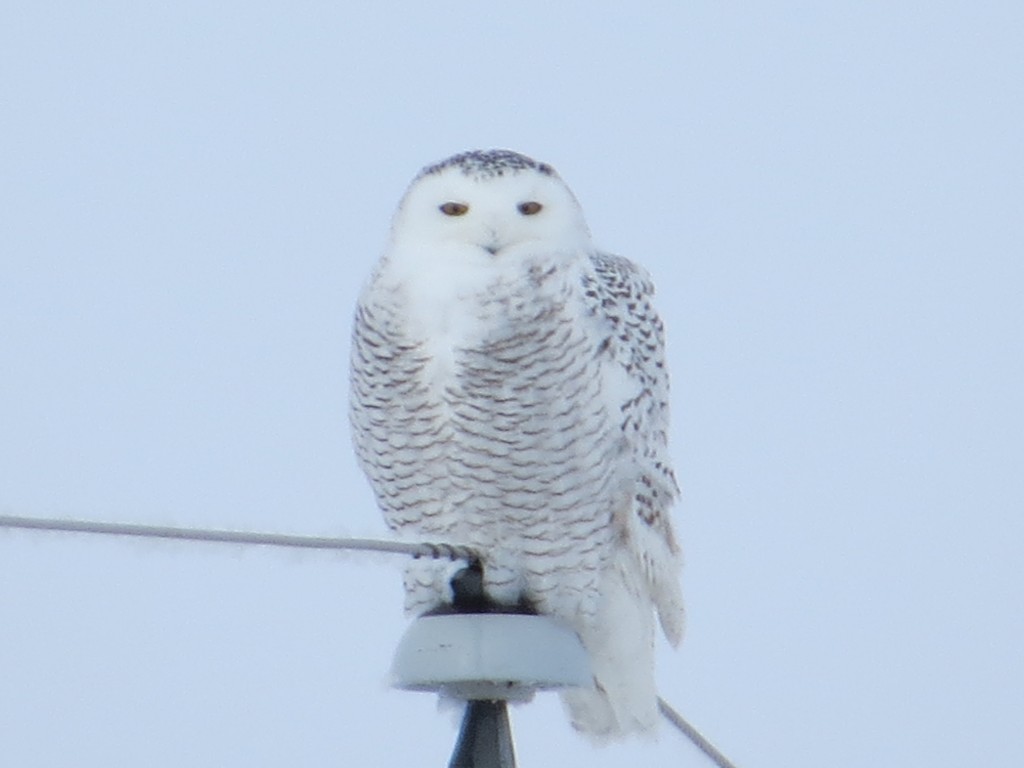 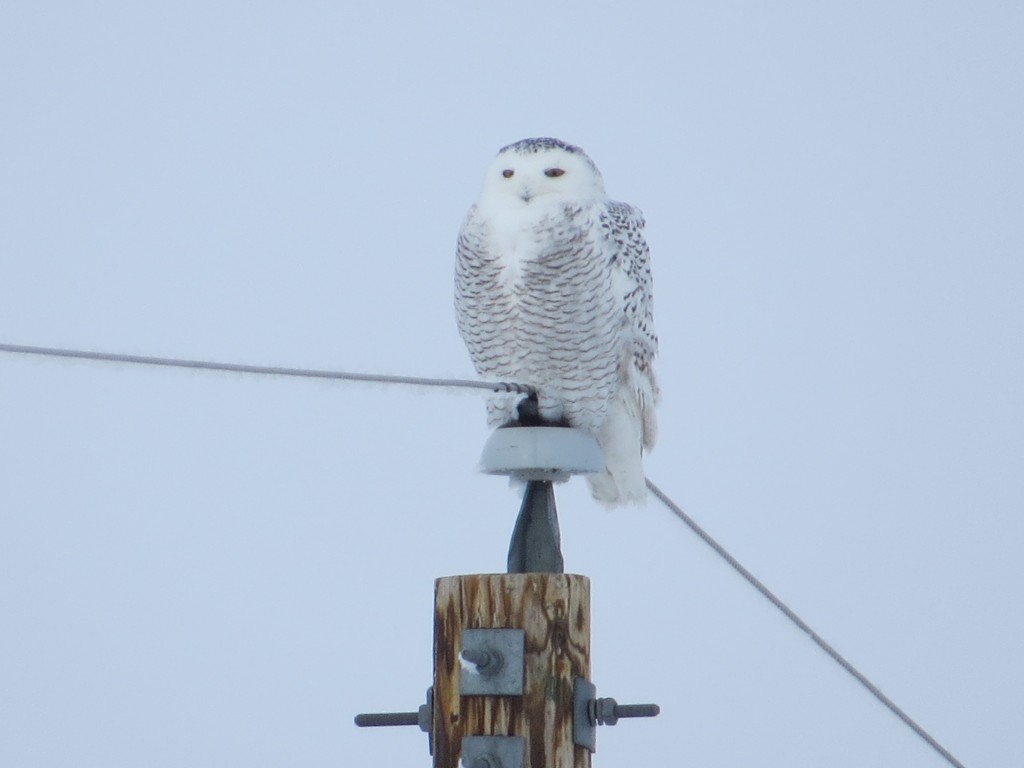 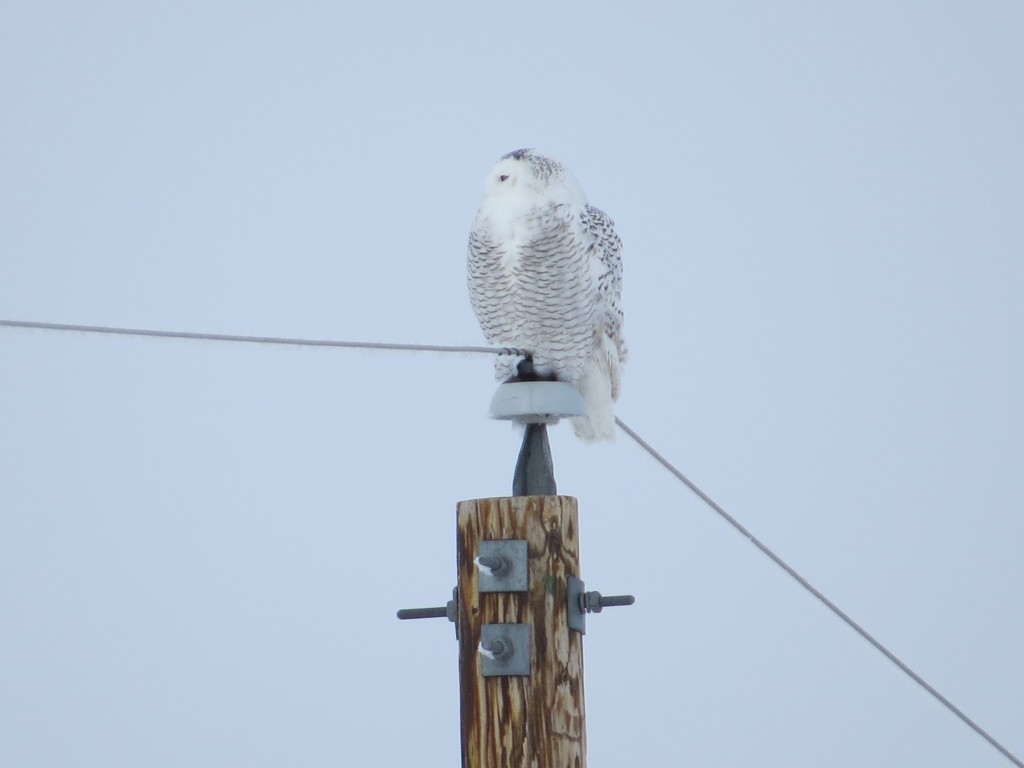 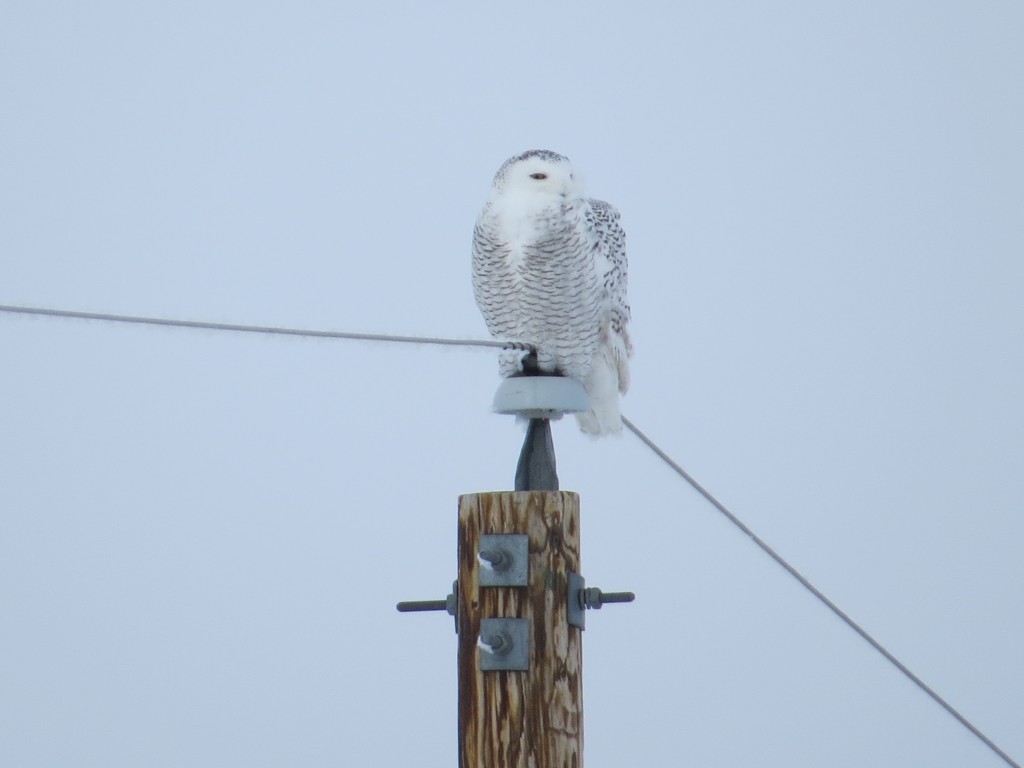 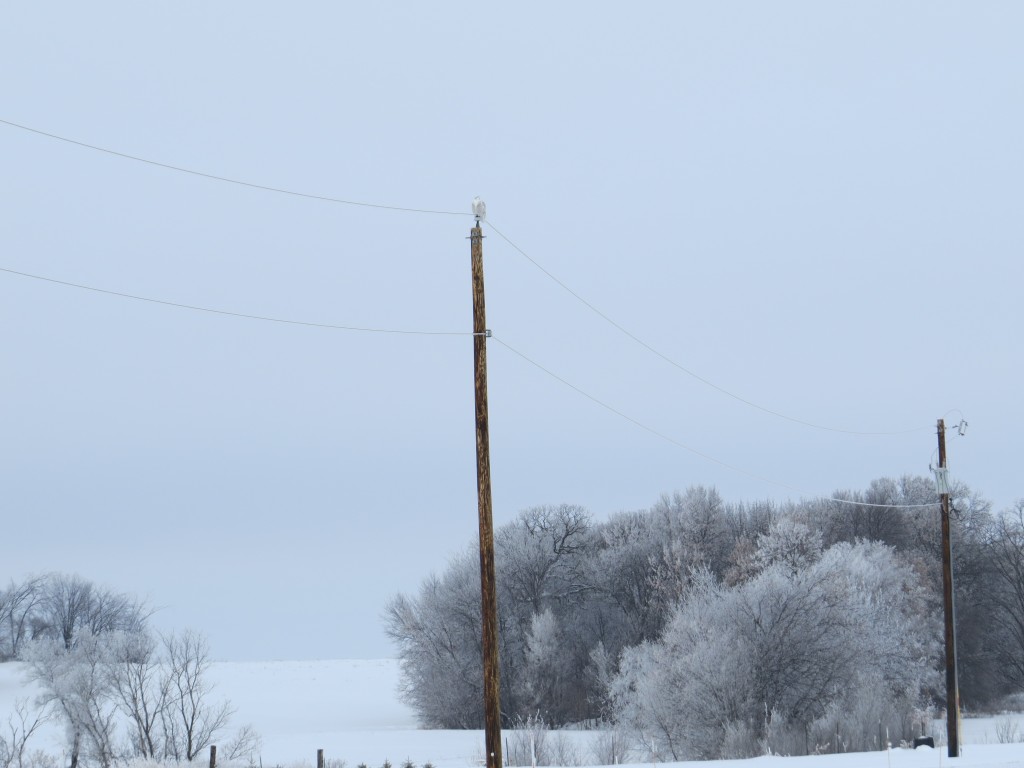 Power poles and telephone poles are the Snowy Owl’s favorite perches as they hunt over open country, like their native tundra.  Watch the pole tops as you drive, but look carefully and drive safely!

It was a rush to see this bird.  Even Evan who has become a little jaded to birding exclaimed, “My second one!”  It was a struggle to point out this bird to Marin, but we eventually got her to see it too.  She sure was mad when she couldn’t see it while we could!

After this it was time to head home.  I found out halfway home that other birders were scouring the same areas we were, and they turned up a whopping 5 Snowy Owls for their efforts! Still, one is always a victory.

Once home, Marin and I had to watch her Sofia the First show so we could see that Snowy Owl together.  As we watched, she turned to me with a big twinkle in her eye and said, “The Snowy Owl part is almost here; are you so excited?!” Yes, Marin, I was. Seeing the cartoon version with her enthusiasm was just as much fun as seeing the real thing.