This winter has exploded with owl sightings.  Besides the invasion of the Snowy Owls, of which new sightings pop up every day, there have been numerous reports of Great Gray Owls and Northern Hawk Owls.  Like the Snowy, these two species are also winter owls. Occasionally they can be found in other seasons, but they are most common in winter when many migrate from the north.  One report of Great Grays was particularly fascinating: up to six owls had been seen on one road!  Many people followed up on this location and found at least one of these magnificent creatures themselves.

It just so happens that our holiday travel plans would take us right by this road near Aitkin, Minnesota. Though we had seen a Great Gray Owl last year, I was giddy to check it out.  Great Grays are one of those birds that you never get tired of seeing. Besides it was only about a 10-mile side-trip on our journey.  We could see a Great Gray real quick and not lose any time, or so I thought.

We found this county road with no problem and pulled onto it.  We could see that there was a fresh snowfall of a few inches that hadn’t yet been plowed.  Thankfully there were some tire tracks to drive in since we were in our van.  There was an instant peace being on this road – it was absolutely quiet. Not a house, not another car, nothing.  It was the perfect hangout for an elusive owl.  With the fresh, fluffy snow, it truly was a winter wonderland.  Melissa got caught up in the search, even putting down her knitting to look for birds.  I am so glad she did.  About 3 miles down the road, she found our first Great Gray of the excursion on her side of the car. 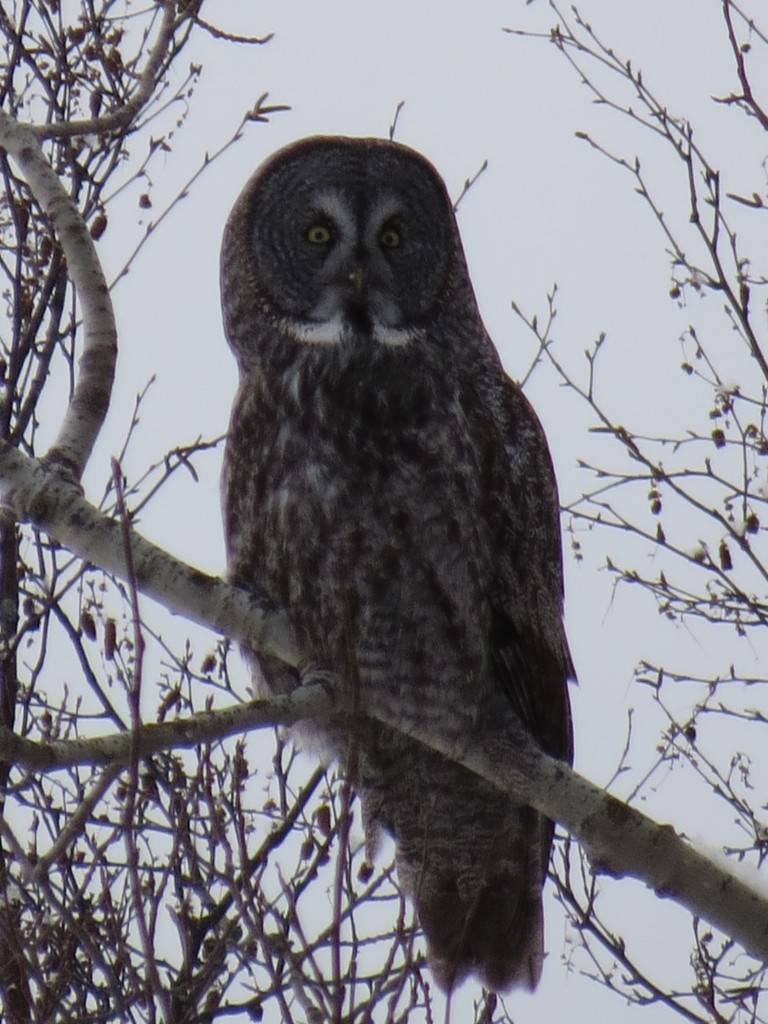 It was about a minute or so before Melissa found a second one just a little ways down the road!  This guy was a lot smaller and very actively moving around.  He was very close to the road, whereas the first one was about a hundred yards away. 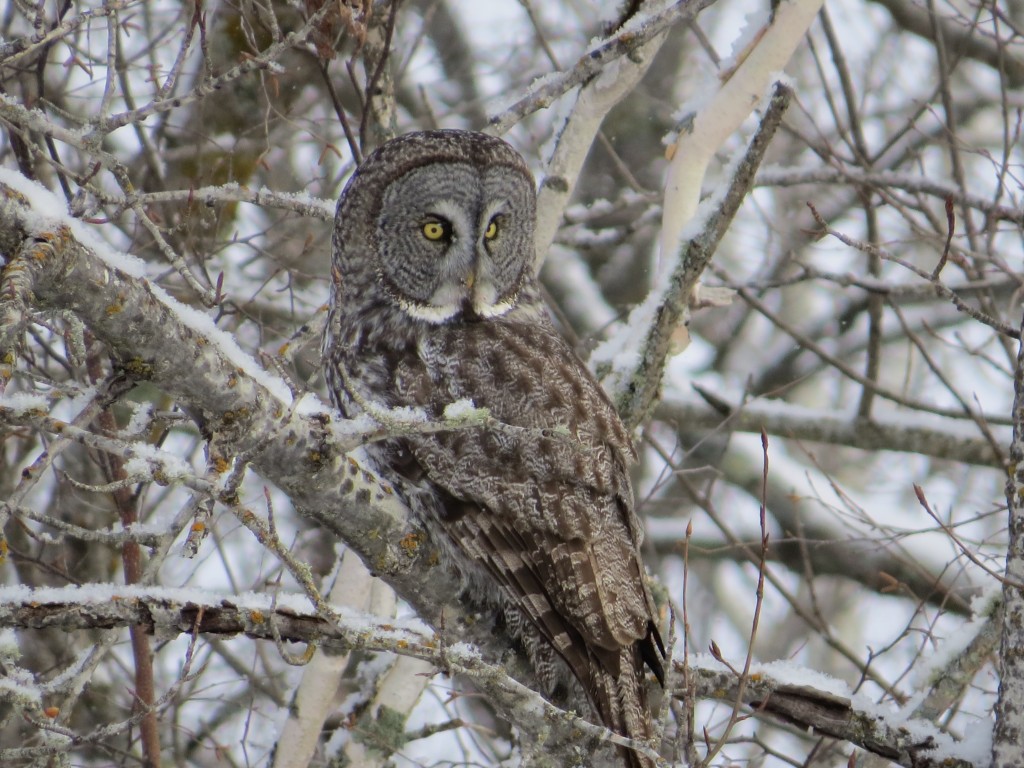 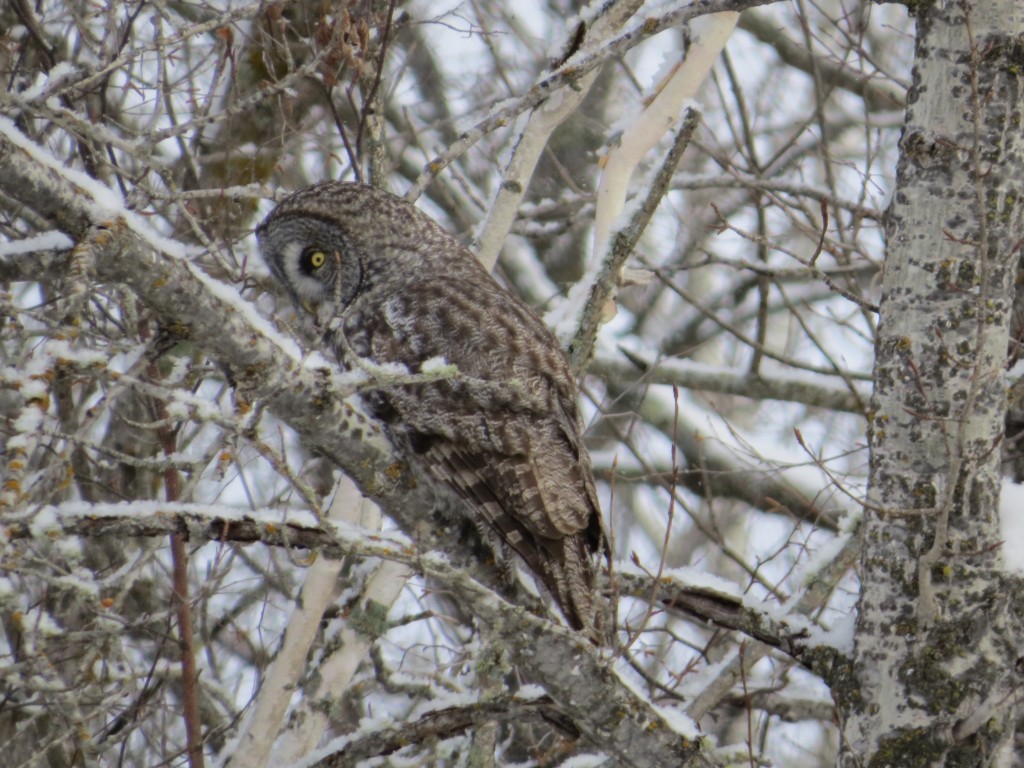 We left this owl alone to continue his hunting in peace.  When we got near the postage-stamp sized Hebron Cemetery, I told Melissa that two Great Gray owls had been found on either side of the cemetery.  The cemetery was on Melissa’s side and tucked away a little bit in the woods, so she craned her neck to look back in the cemetery, and said, “Oh, Josh, look.”  At the top of a very tall pine in the middle of the cemetery was a Great Gray Owl looking for any rodent activity in the open area below. 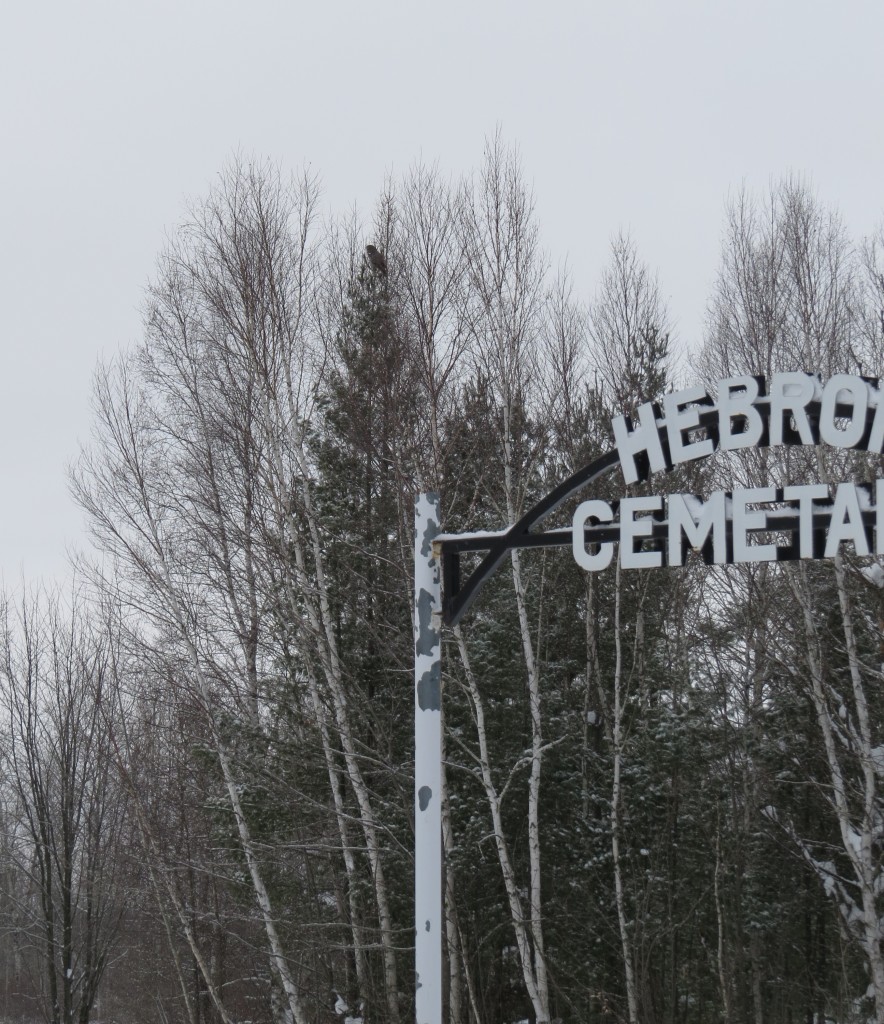 Great Gray Owl No. 3 in Hebron Cemetery or “Cemetary” 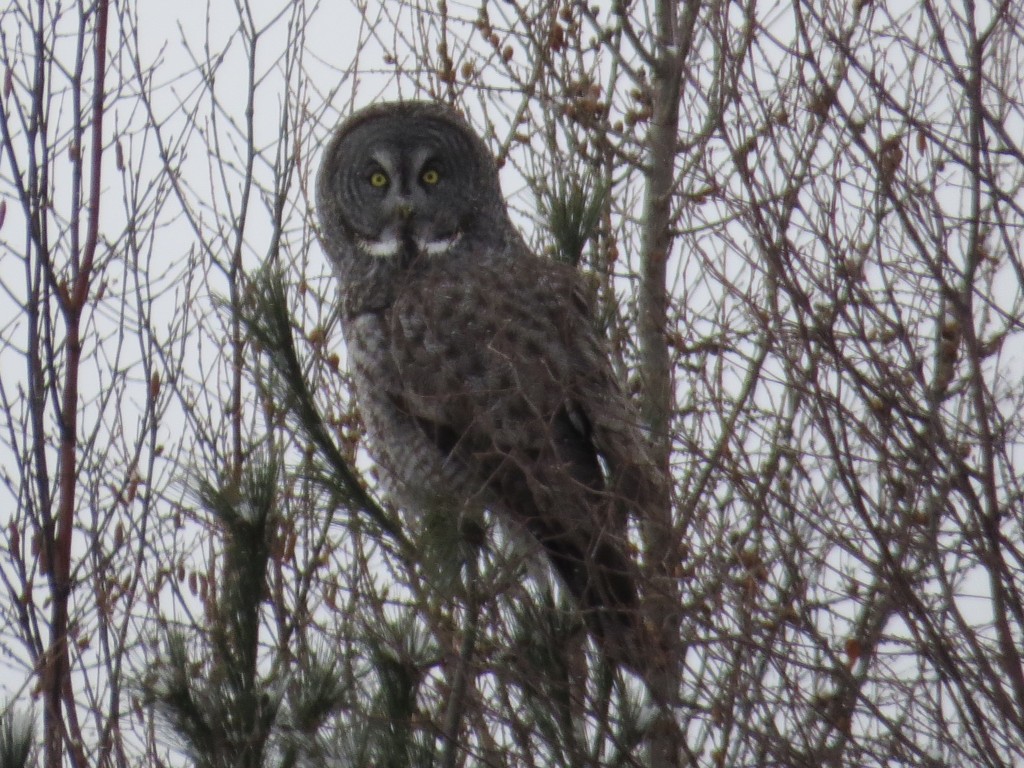 While I stood on the road and photographed his owl, he flew in closer to pose! He ended up landing on the cemetery’s flagpole. 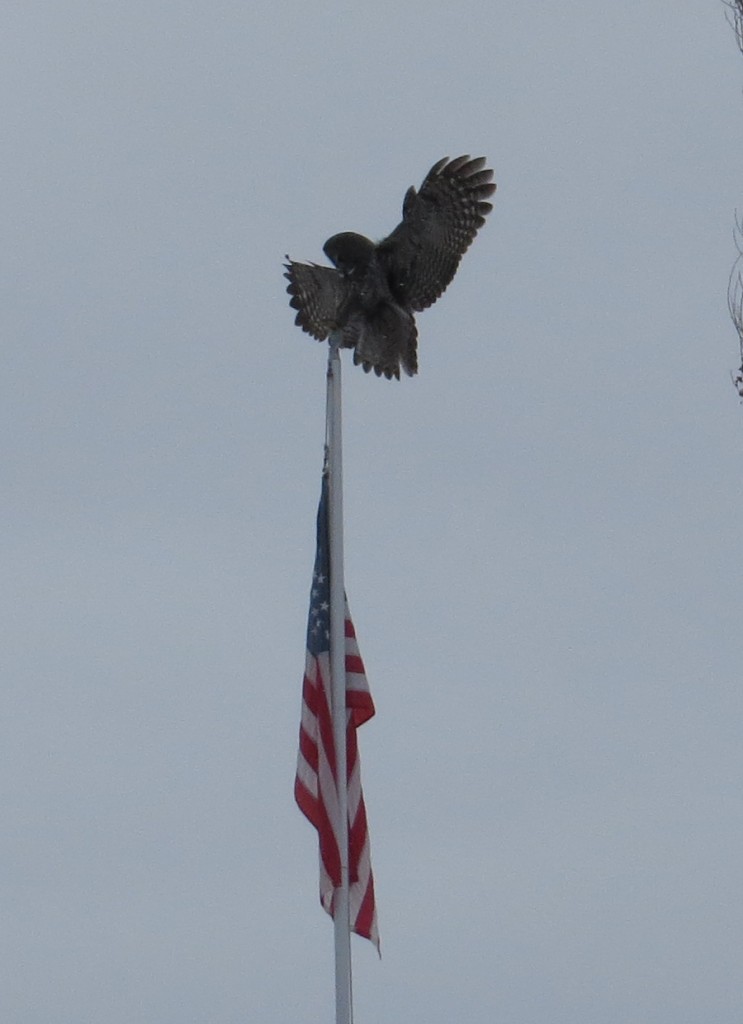 If there were auditions for a new national bird, I think Great Gray Owl No. 3 wins. 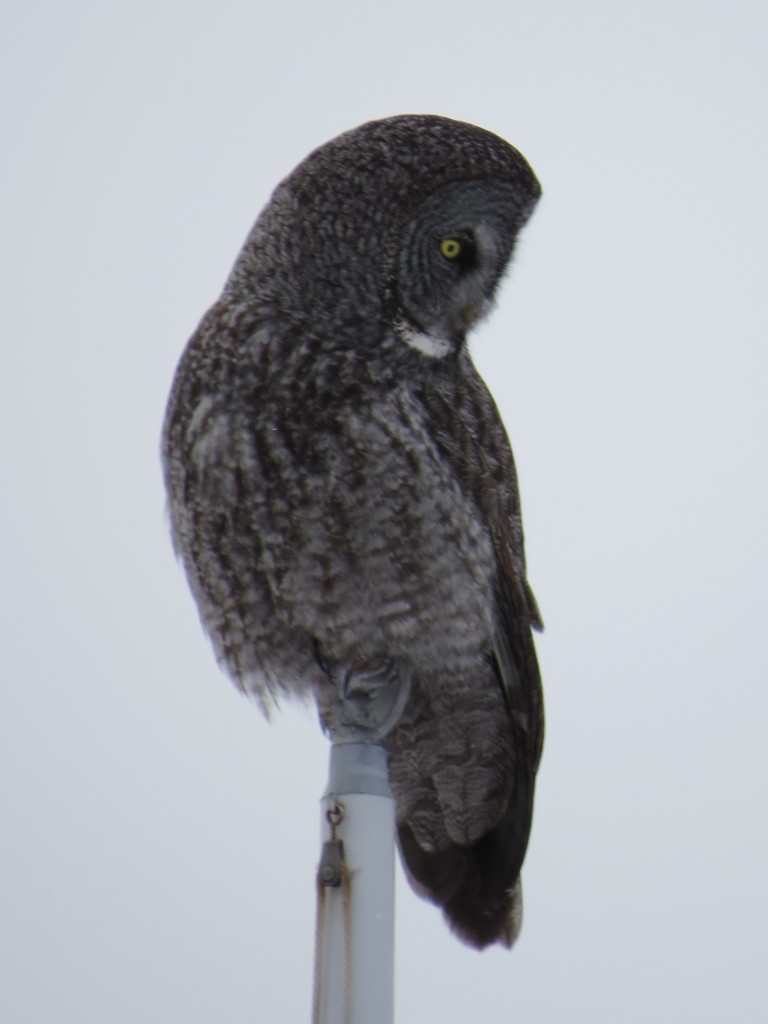 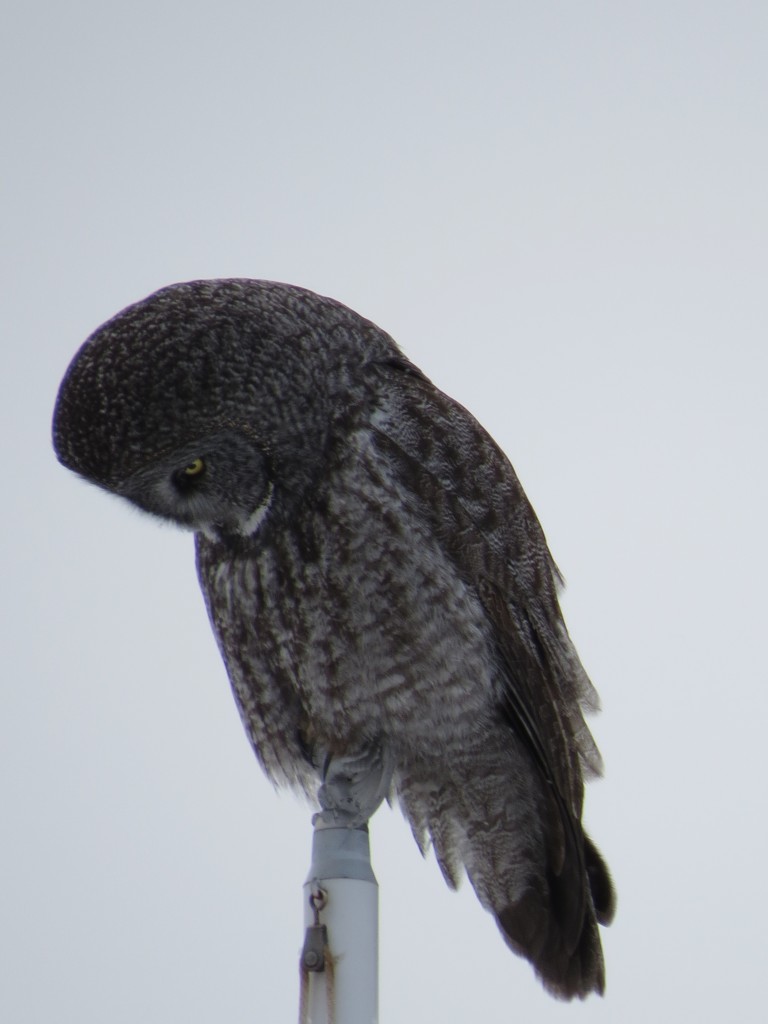 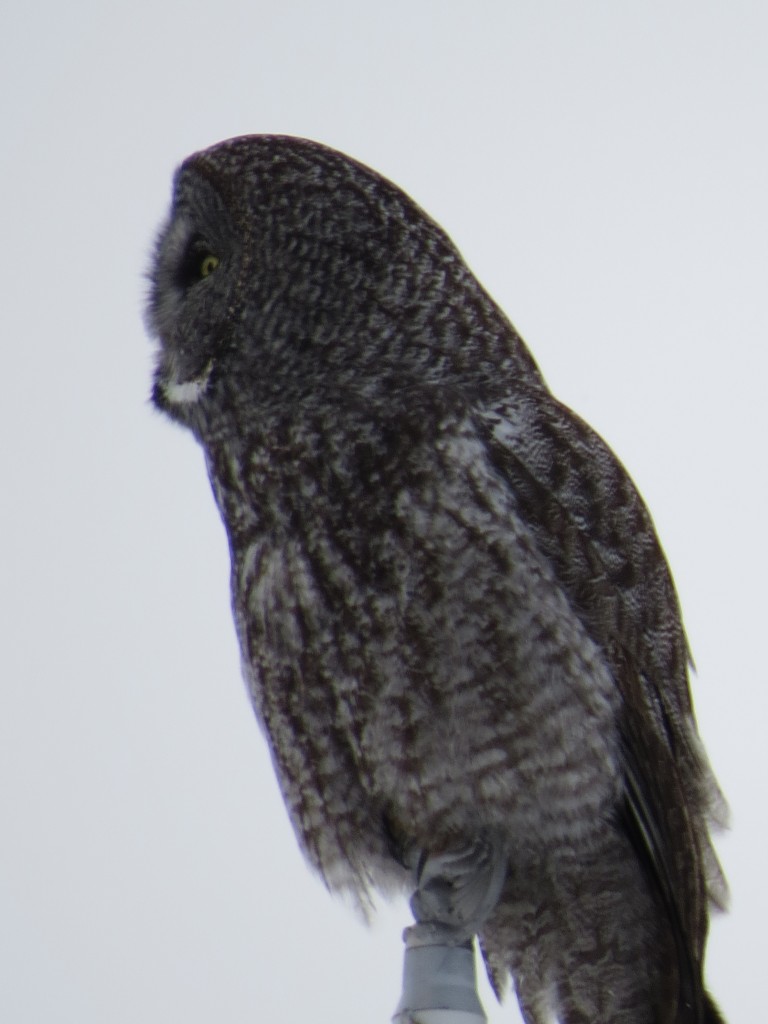 Great Gray Owl No. 3 posing for his profile shot

This owl was very active and paid no attention to me.  He flew from his flagpole perch even closer to me and landed right by the road.  To see a bird of that magnitude flying so close to you is a really cool experience.  We decided to leave this owl be and continue our hunt for more.  We didn’t have to wait long because once again Melissa found us a new one just beyond the cemetery.  It was hilariously perched at the top of a small pine. 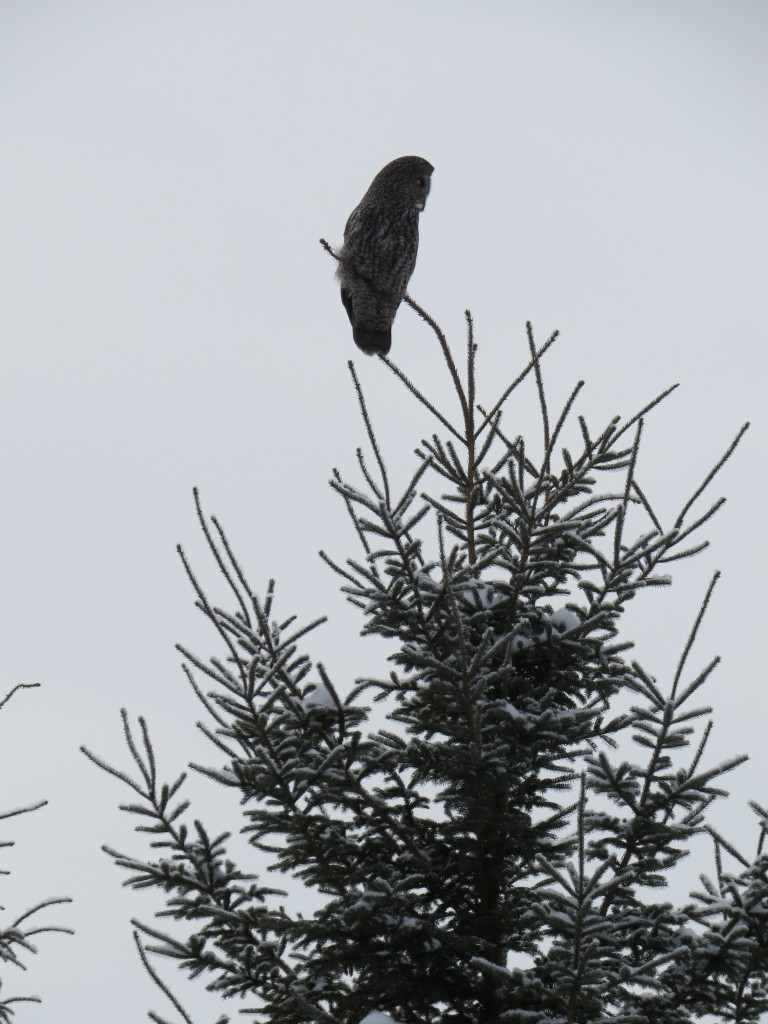 It wasn’t long after this that we were out of the woods and entering a wide open area called the Willowsippi Wildlife Management Area. 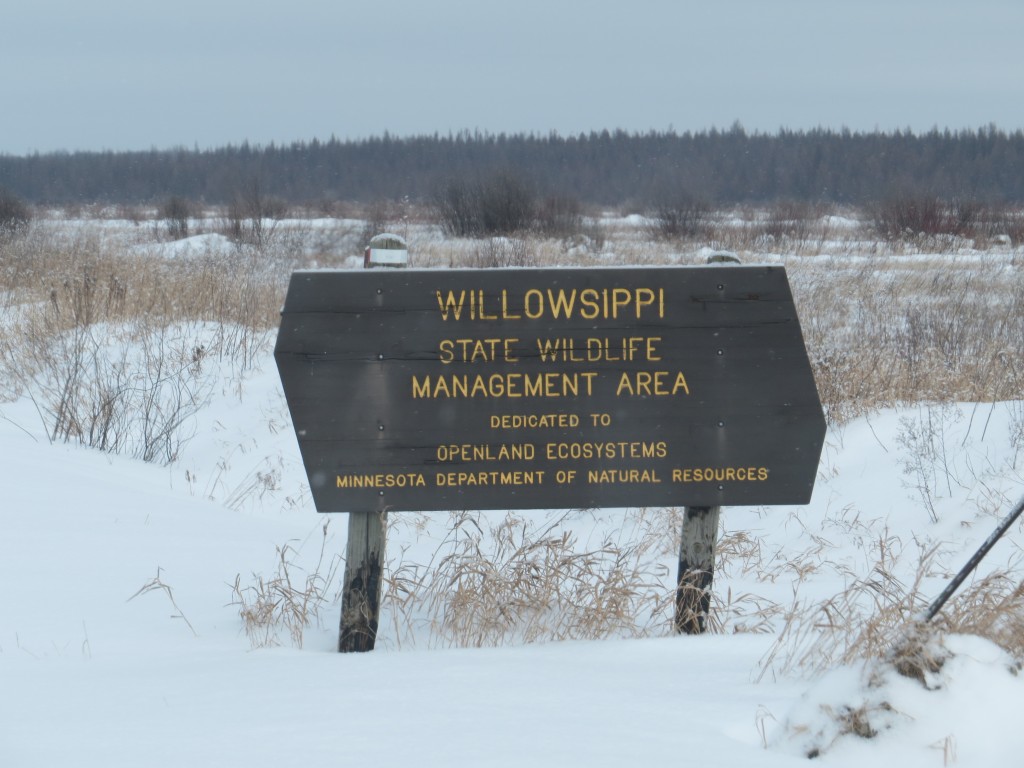 There was a power line running along the road and we noticed a bird on the wire.  It looked too small to be an owl but it didn’t look crow-like either.  I pulled up the binoculars and saw that it was our Northern Hawk Owl lifer!! This was a major target for this winter and one I had hoped to see while visiting relatives up north. 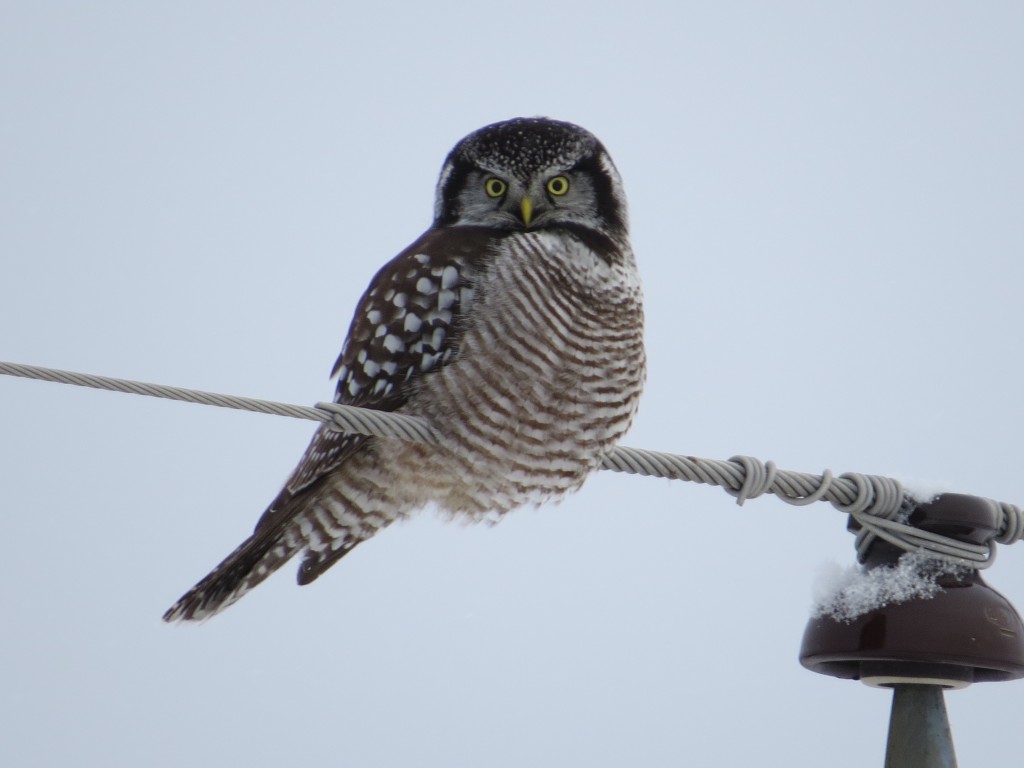 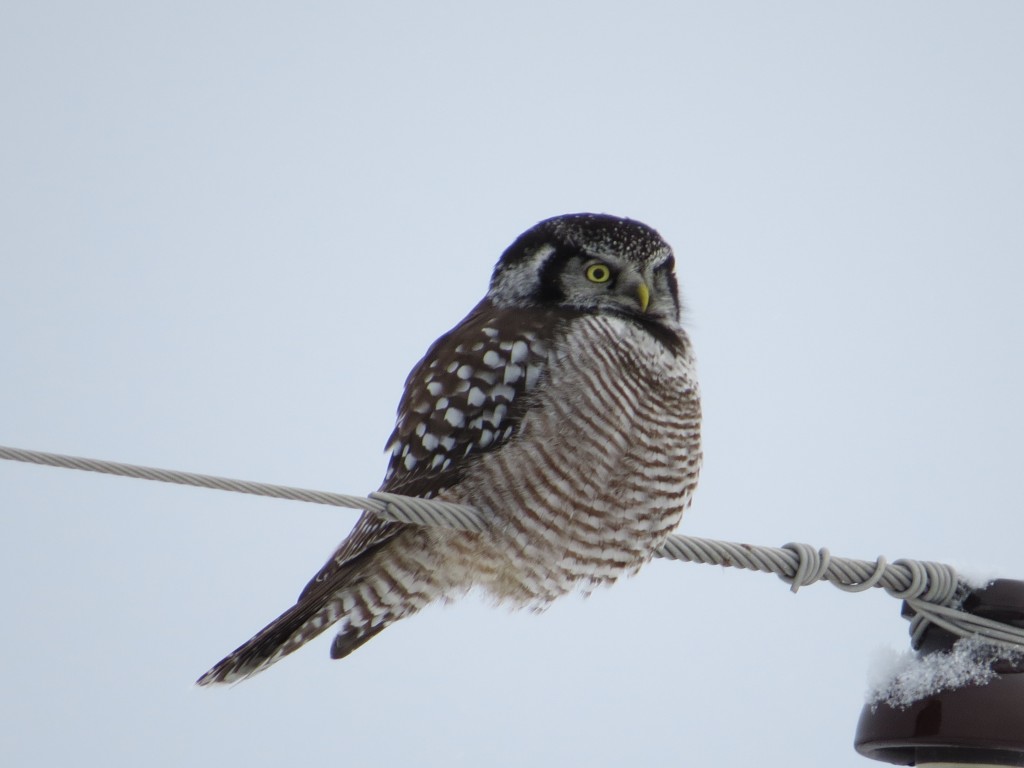 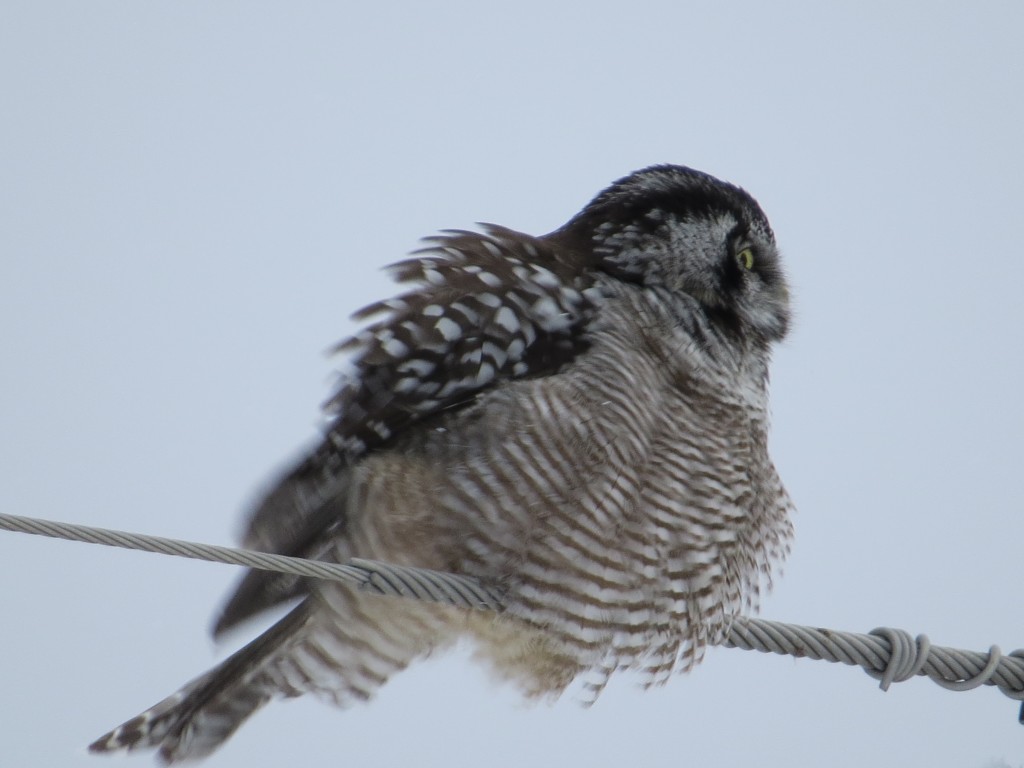 Wow, if seeing all those Great Gray Owls wasn’t exciting enough, this sighting made for an epic birding day that will likely be unmatched.  Seeing any owl is always a thrill, but you can never repeat the first time you see a species like this. It is a heart-pounding, hand-shaking experience.

We continued on to a road to the south to follow up on another reported location of a Great Gray just a couple miles a way.  We didn’t have any luck, so we turned around and made our way back to the highway through the “owl zone.”  Going back we only saw two of the four we saw coming in.  One was even perched on the cemetery’s sign itself.  As we drove I was reading the odometer carefully to mark where we had seen each bird as others would likely be interested to know.  We had gone nearly a mile past the first owl location when Melissa found yet another Great Gray Owl!  Because of the great distance from the others, we were confident this was a new owl.  Besides, some birders had reported finding 5 or 6 on this road. 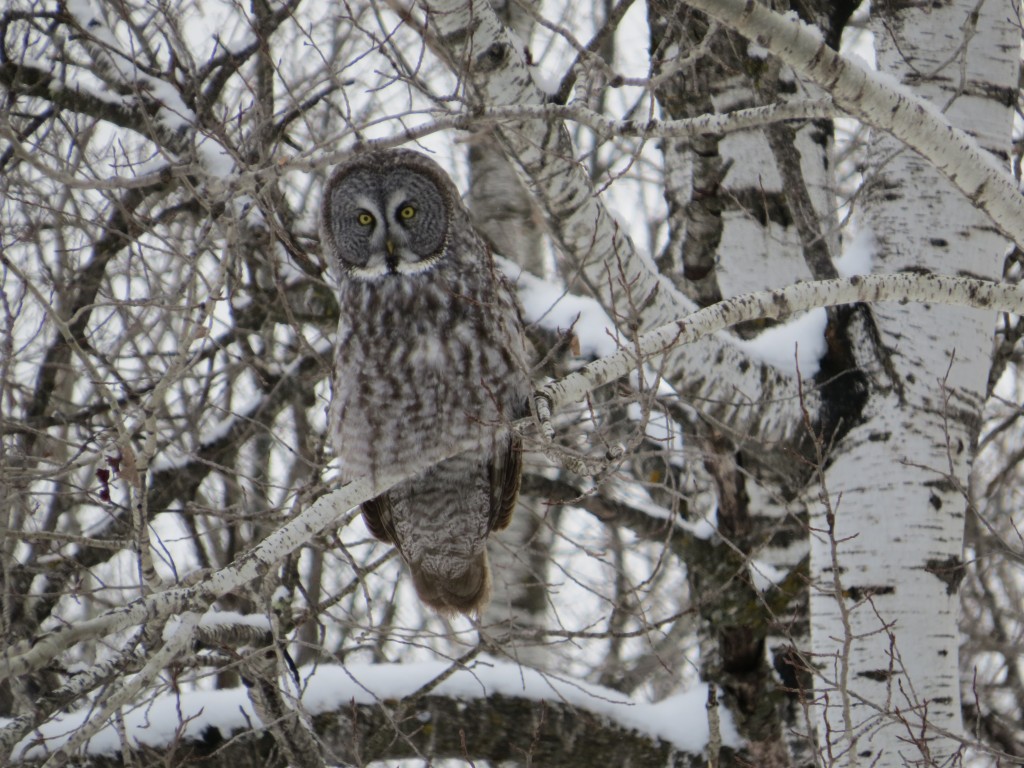 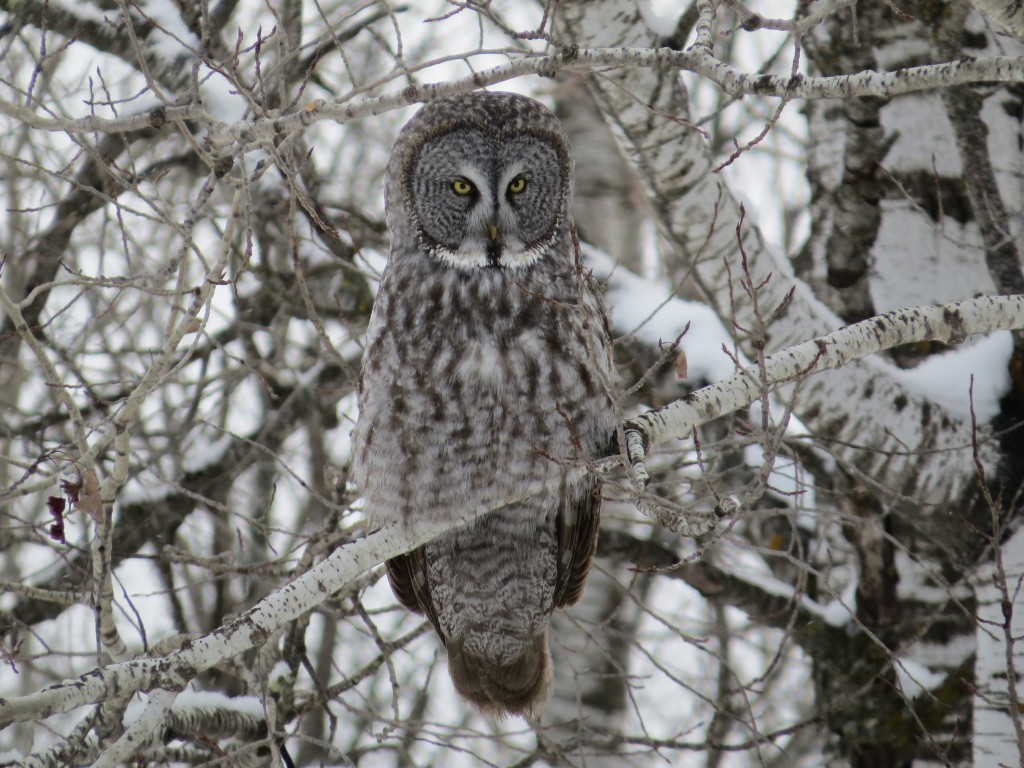 Great Gray Owl No. 5 giving us a parting look

Melissa was clearly the hero of the trip finding all five Great Gray Owls.  As fun as it was to see all these great birds, watching her get in to the “hunt” was just as much fun.  Our little side trip that was only supposed to add 15 minutes to our trip ended up taking over an hour.  The birding was just too good.  In addition to the owls, I also spotted a Northern Shrike and what very well could have been a second Northern Hawk Owl flying across the road behind our car.  Epic is almost too small of a word to describe this trip. It was a birder’s dream to see such cool owls in such abundance and in close proximity. For once we were in the right place at the right time.