Last spring one of the first migrants to come through was the Golden-crowned Kinglet, and I would see images of them posted to the Minnesota Birding Facebook Group.  I really wanted to see one.  I asked Randy where to look, and he replied my yard would be as good of a place as any.  So all through spring migration we kept an eye out but never did find one.

Through the summer we got distracted with many other bird chases.  Fall migration also kept us on the lookout for good birds, both new and old.  Then a couple weeks ago Joel emailed alerting us that he had two Golden-crowned Kinglets in his yard.  He went on to say that we should be able to find them easily if we birded certain locations in the area. So went birding immediately.  And we didn’t find them.

Then last weekend we took a trip to northern Minnesota with a one-night detour to Minneapolis.  The metro was the perfect place to look.  Many birders in the Minnesota Facebook Birding Group said we should be able to look anywhere and find them easily. But we didn’t. We birded Westwood Nature Center in St. Louis Park and around Lake Harriet in Minneapolis.  Nothing.

While we visited family in northern Minnesota, I continued the search since these birds reside there in the summer and move south in October. While up north, Steve texted me saying he found some in Willmar.  Doggone it.  I wouldn’t be home for a couple more days.  I was always just one step behind these birds.

I held out hope as we headed south because we cut through the Sax-Zim Bog – a phenomenal birding hotspot where reports of Golden-crowned Kinglets had recently surfaced. No luck.

Once back in Willmar, I checked Steve’s location at the MN West Technology Campus. Not a sight or sound of these birds. Argh. Then I ended up getting busy with the work week and didn’t get out birding until Saturday morning. I asked Evan the night before if he wanted to go with me the next morning.  He said he wanted to sleep and stay in his pajamas all day.  That was fine with me; the kid had a busy week and was getting sick.  Plus he has been on several fruitless searches with me for this bird.

My first stop of the morning at MN West yielded nothing.  Then I decided to head to the cemetery by Foot Lake.  On the way I got a text from Randy saying that he just had some Golden-crowned Kinglets in his yard!  In fact he only noticed them because they hit his window. Coincidentally I was two blocks from his house when I got the text.  I wheeled in right away.  Randy and I looked around his yard and didn’t even see a single bird.  You’ve got to be kidding! My timing was impeccable; how could they not have been there?

I moved on to the cemetery by Foot Lake.  After driving all the roads in the cemetery I finally spotted some bird movement – and it looked like the behavior of a kinglet!  Sure enough, it was the Golden-crowned Kinglet!  And there were several!  They were all foraging in a spruce tree and a juniper tree.  I got out of the car to photograph them, and they didn’t care I was there.  In fact, one was in a tree branch just a few feet in front of my face. 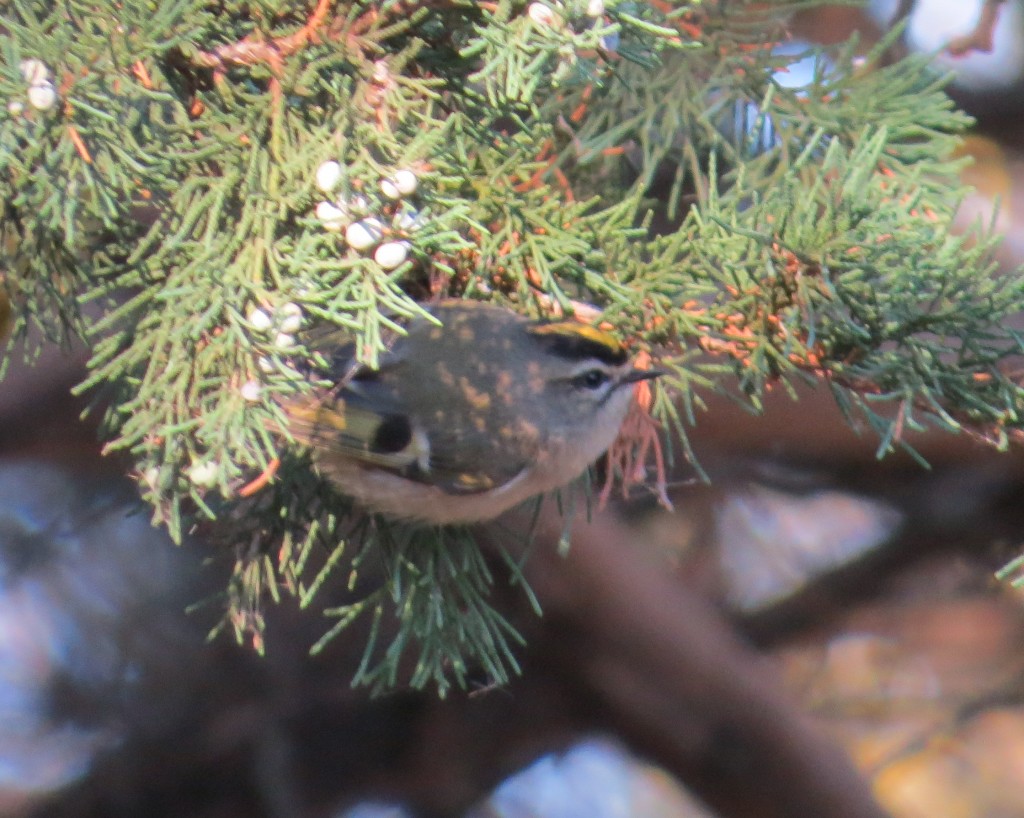 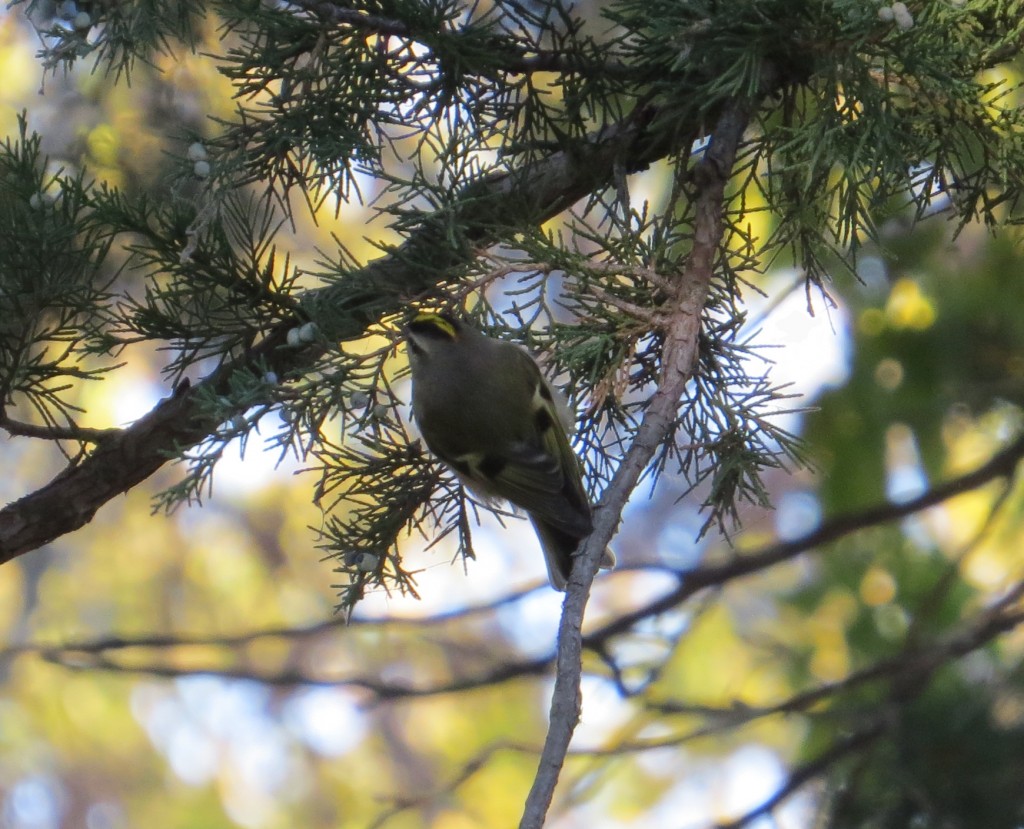 These birds move quickly and never sit still.  They constantly flit their wings and hover at the ends of branches. It was very fun to watch. 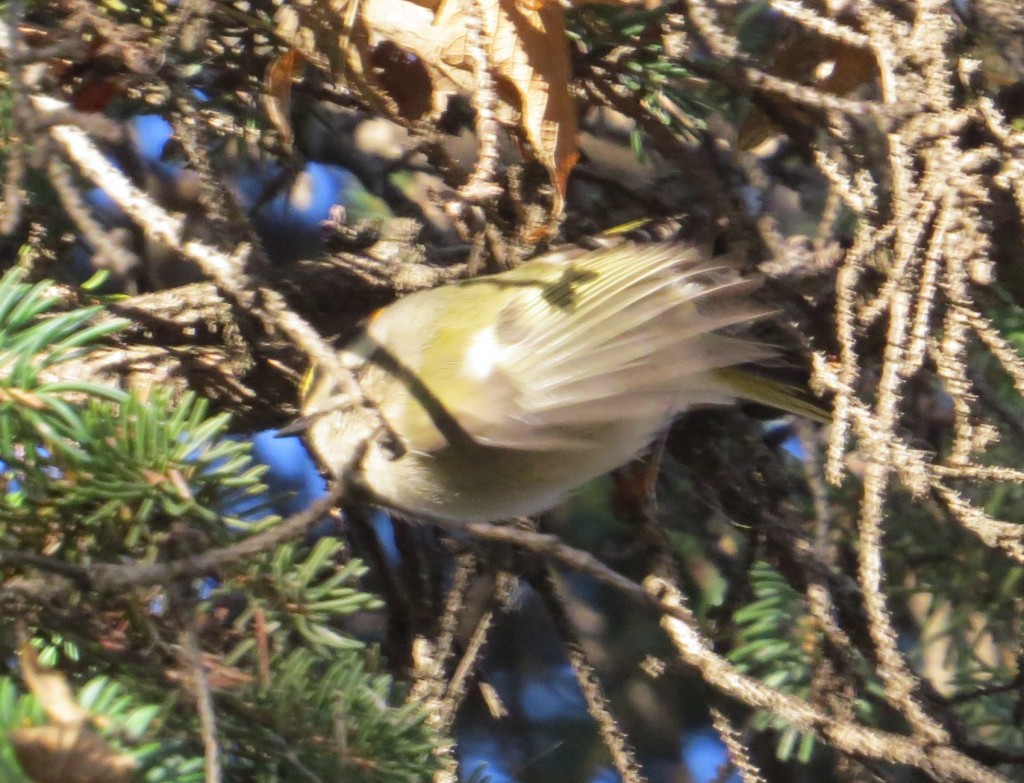 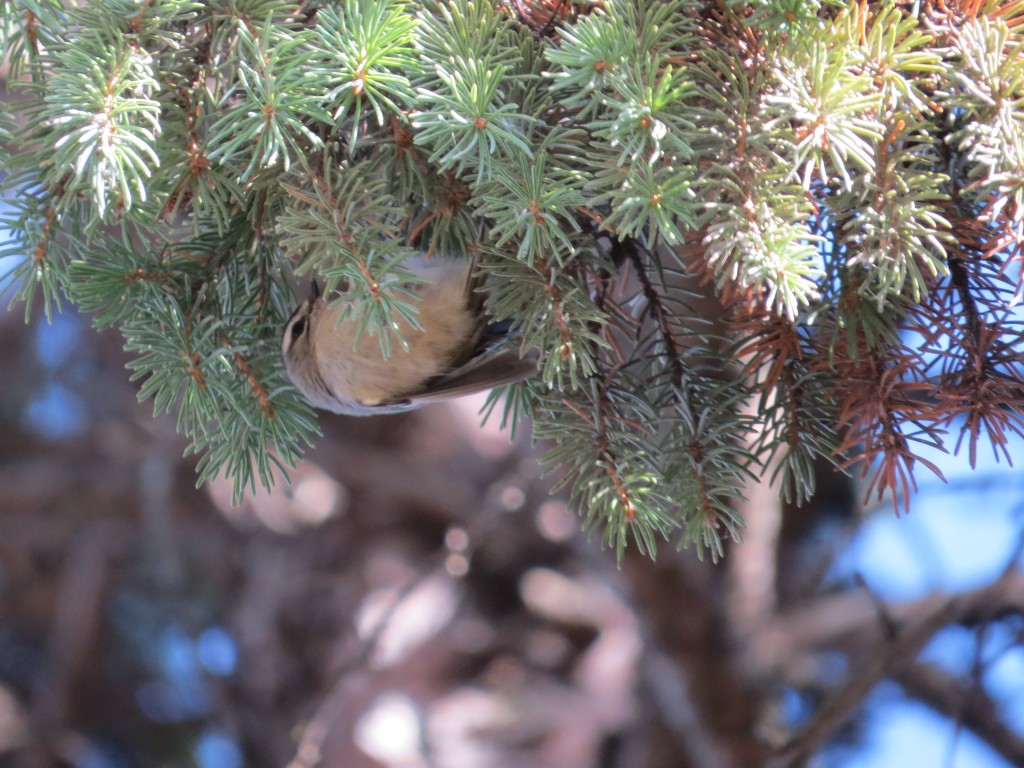 What a rush! I sent out a flurry of texts.  One was to Melissa to ask Evan if he wanted me to bring him out here.  She responded that he didn’t.  The rest were texts to my birding friends who appreciate conquering a nemesis bird and getting a lifer.  Some of the responses I got were:

And no, those weren’t from Melissa, Marin, and Evan.  The response in the Minnesota Facebook Birding Group was also very positive.  It’s a good thing we birders support each other in our crazy, obsessive quests.

Later in the day Evan and I had to go back to Willmar to get haircuts.  Melissa checked us in to Great Clips online and said we had a half-hour wait.  What to do with the extra time? I drove Evan through the cemetery to take a quick look.  And we refound one of the Golden-crowned Kinglets!  Evan got his lifer today too!  Even though he didn’t show any interest earlier in the day, he said, “Yay, my 204th life bird!”  His count might be off, but it’s close.

There are currently no more nemesis birds for us.  That will change, I have no doubt.  It is a bit sad when a nemesis bird is found because the thrill of the hunt is half the fun.