This morning I saw that the redpolls were abundant and ferocious.  I still couldn’t believe I fed one by hand the day before, and I was itching to repeat the experience.  I thought it would be fun to make a video of my second attempt at feeding redpolls by hand. Melissa was still asleep, so I set the camera on top of the grill to record myself.  You have to see this to believe it.  The video tells the story much better than words could ever do.  Be patient with the first 45 seconds or so.  It gets really good, trust me.

This afternoon I asked Evan if he wanted to try feeding the birds by hand.  Of course he was interested.  Silly me for asking. I gave him a tutorial in the house about how to do it and stressed the importance of not flinching or reacting.  I loaded him up with seed, put him in position, and got out of the way to watch.  He was perfectly still even as no birds came for the longest time.  I was proud of how well he did.  Then, finally, a redpoll came in close. Once one tries out the new “feeder,” the others quickly come in. 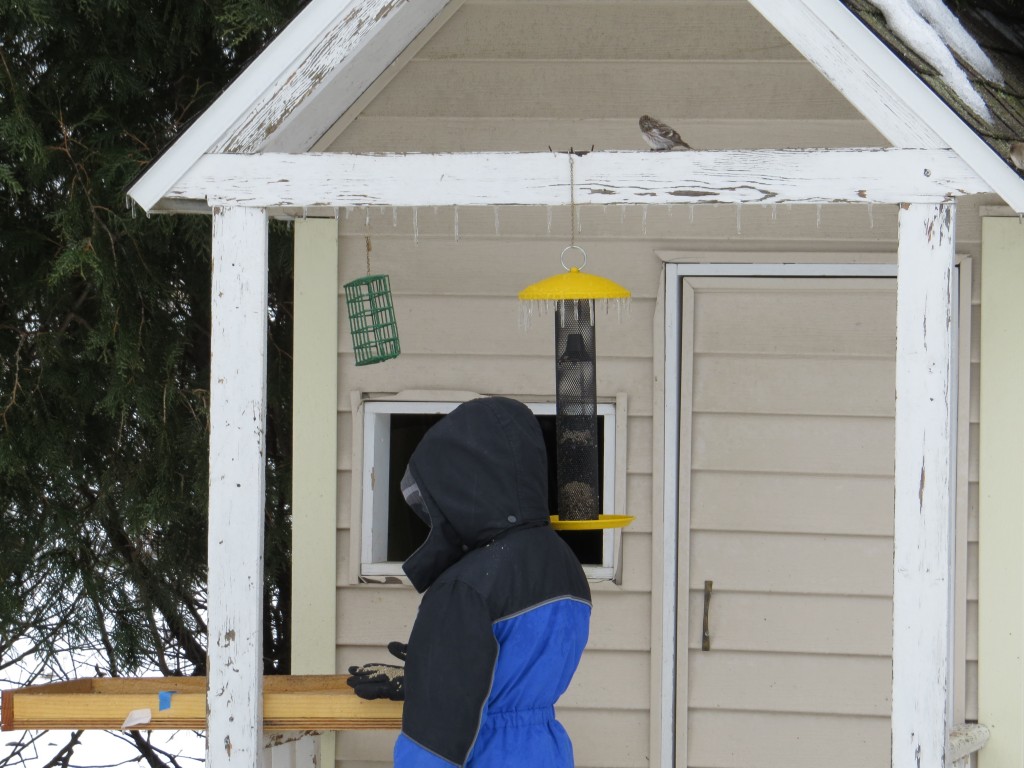 They were right by his head!  I saw his body wiggle as if he were giggling at this sensational experience. 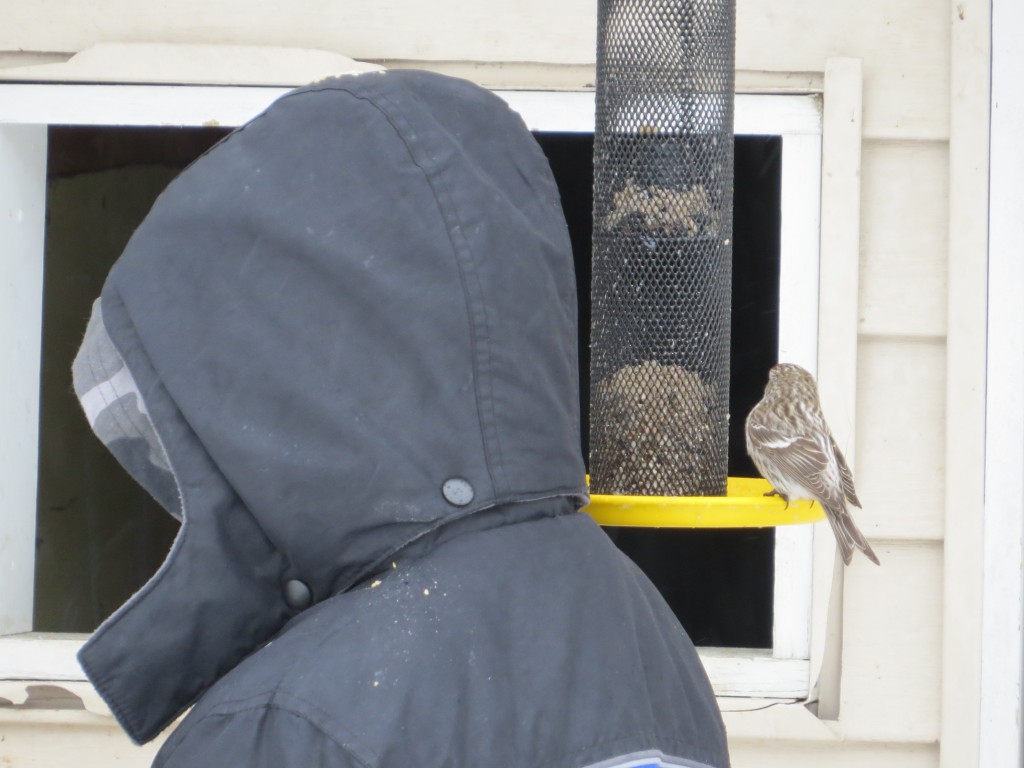 Then he had a bird eating seed off his hood!  It stayed for a long time. 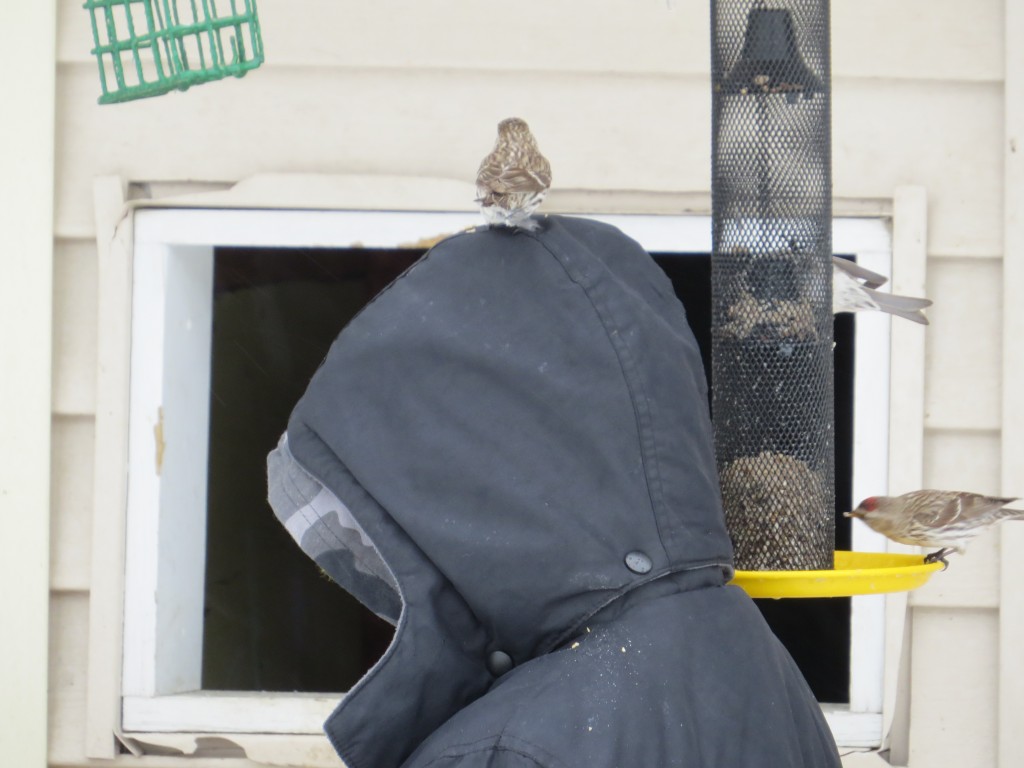 Finally, one landed on his hand!  I could only imagine what Evan was thinking at that moment while he watched a wild bird in his own hand. 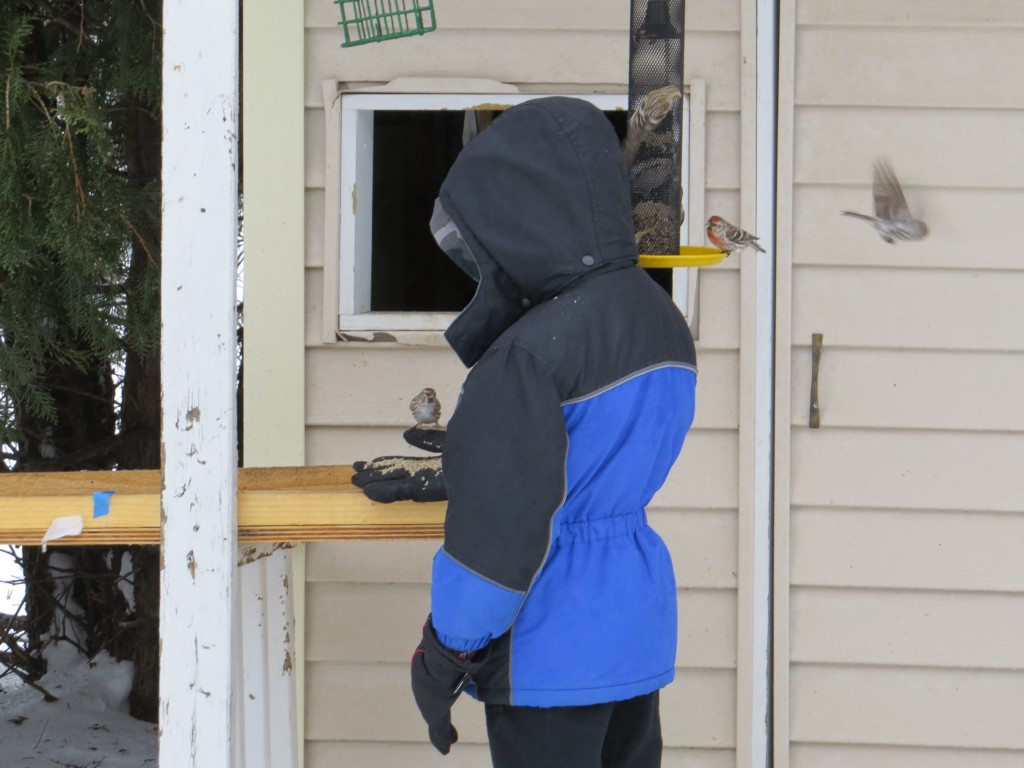 After awhile, I figured he had to be cold and tired of standing still, so I broke the silence and asked if he wanted to be done.  The birds scattered at the sound of my voice.  He responded with a disgusted, “No!”  Since he wanted to keep at it, I decided to join him. We could not pull the redpolls back in.  After a few minutes we decided too try the front yard. The feeder is 6 feet off the ground, and so I was the only one able to reach my hand up there.  Evan just held his in the sky.  Eventually one redpoll landed on my hand.  Time to experiment.  I wanted to transfer the bird to Evan’s hand.  After slowly bringing my hand down to his and tilting it ever so carefully, I was able to get the bird to hop on to Evan’s hand.  Then I reached up to try to get another bird while Evan’s bird gorged itself on seeds on his hand.  It stayed for a long time.  I never did get another one to land on my hand, but it didn’t matter.  I was happy for Evan that he got to experience this magic.

Later in the day I made a trip to town to pick up more bird food as the redpolls have been emptying my thistle feeders in just a day in this awful weather.  While at the store I ran into Steve in the bird-feeding section.  Go figure.  He said he was going to try hand-feeding the redpolls.  I gave him some pointers and then we parted company.  It couldn’t have been much more than an hour later that I got a text from him saying he had success.

So, if you have redpolls and want to try this, here are my tips:

-Wear a hood to conceal your human form.  Wear gloves to keep your hands warm.

-Look down and don’t stare at a bird if it comes close.  Watch it out of your peripheral vision.  This is the critical time.  Stay as motionless as possible.  Once a bird comes in to feed, it breaks the ice for the others.

-Hold your hand full of food at the base of the feeder.  This gives a rest for your hand and brings the new food source close to the old.  If a bird lands on the feeder above your hand, slowly move your hand up to the bird.  When you touch the bird, it should just step or hop onto your hand.

-Once the bird is comfortable, you can begin moving your hand (and the bird) around and look at the bird all you want.

-To gain the maximum effect, put bird food on your head, shoulders, arms, or wherever it will stay. 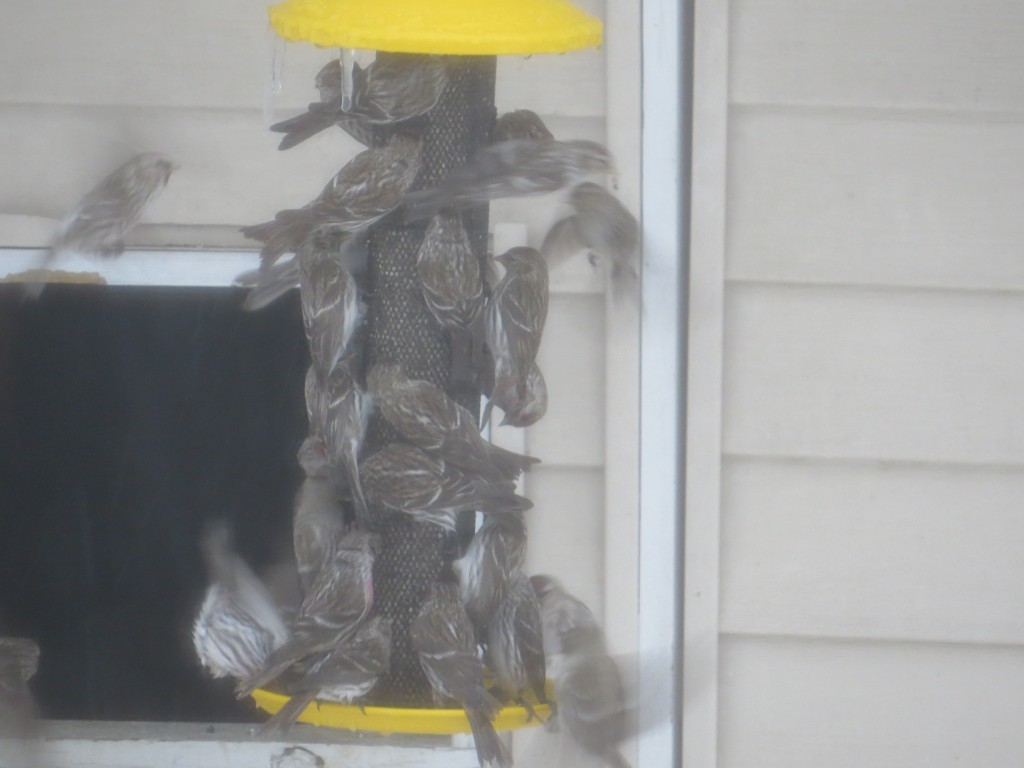