If you are a birder who yearns to go on an out-of-state lifer grab but can’t because of your commitments to non-birding family members or significant others, pay attention. If you are stuck at home drooling over others’ epic blog posts of exotic birds from far-off lands, listen up. This post is for you.  Like you, when it comes to birding I don’t have the devil-may-care attitude of the retired, the single, or the extremely rare birding couple. In recent months I discovered there was a whole pocket of lifers waiting for me not too far to the south in the Kansas City area. KC is less than 8 hours away by car, which is nothing considering its potential for lifer glory.  Dragging the family there for birds was not going to fly. Neither was spending the time and money to go on a solo adventure.  So I hatched a plan to get to KC where everyone won.

Since Melissa and Evan are die-hard Minnesota Twins fans, all I had to do to sell them on the idea was an offer to take them to KC to see their beloved team take on the Royals. 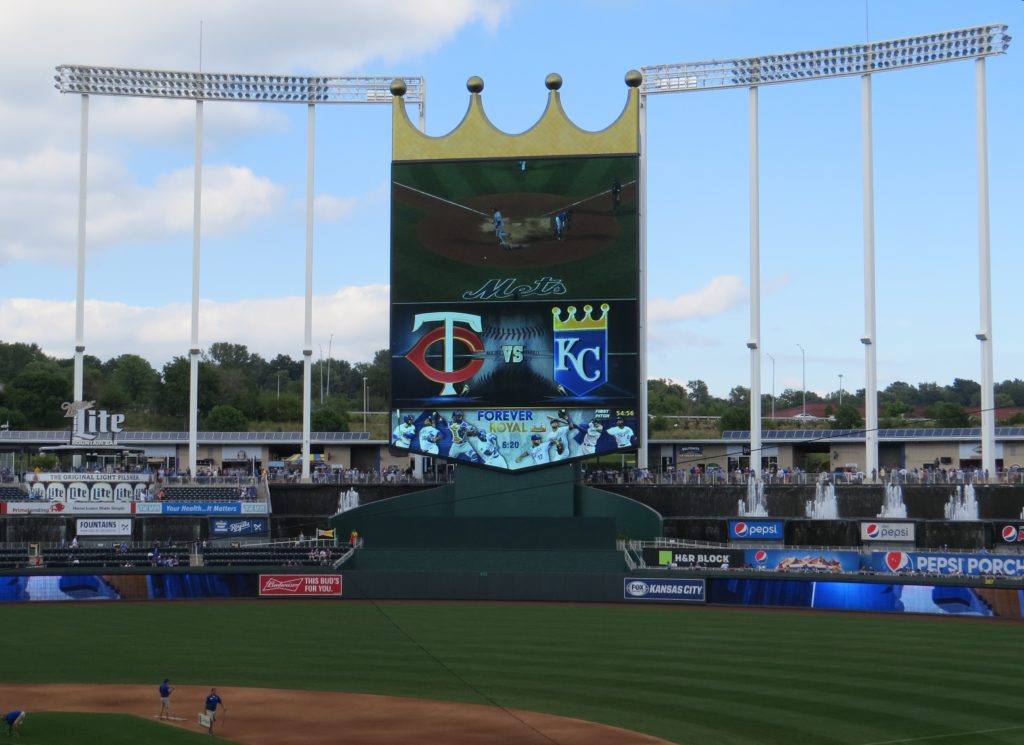 That pretty much sealed the deal for them, but for added insurance I got seats which put Evan in a position of high probability to check off a major bucket-list item. It worked. 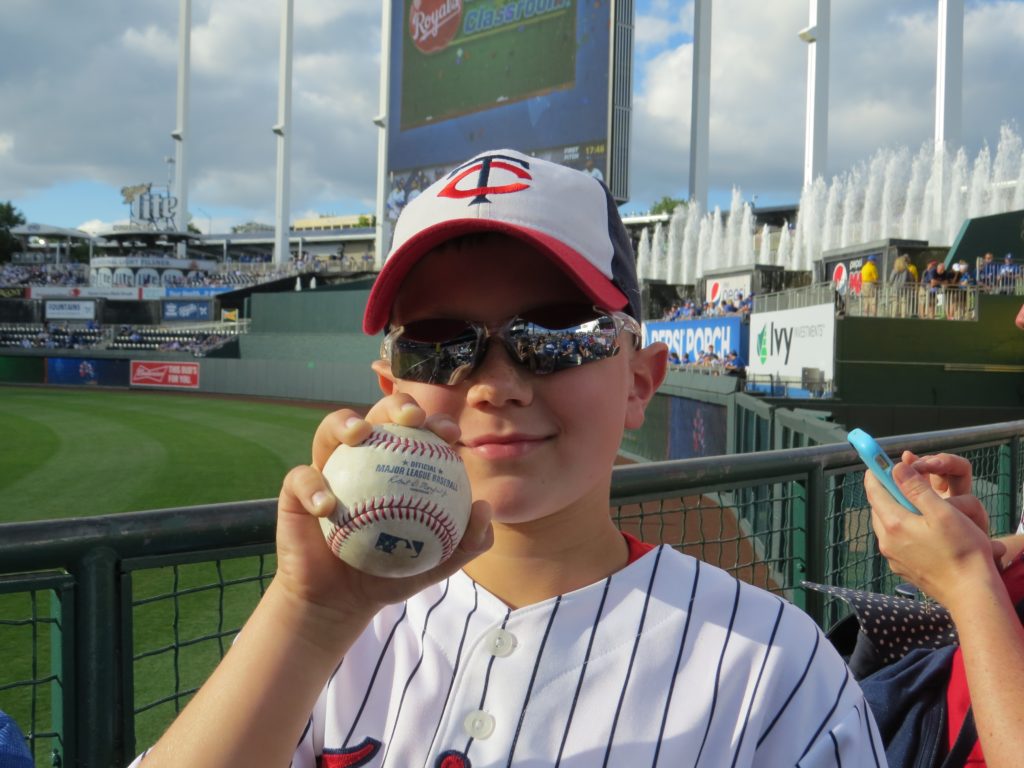 Having the entire family on the jumbo-tron and on TV was the icing. 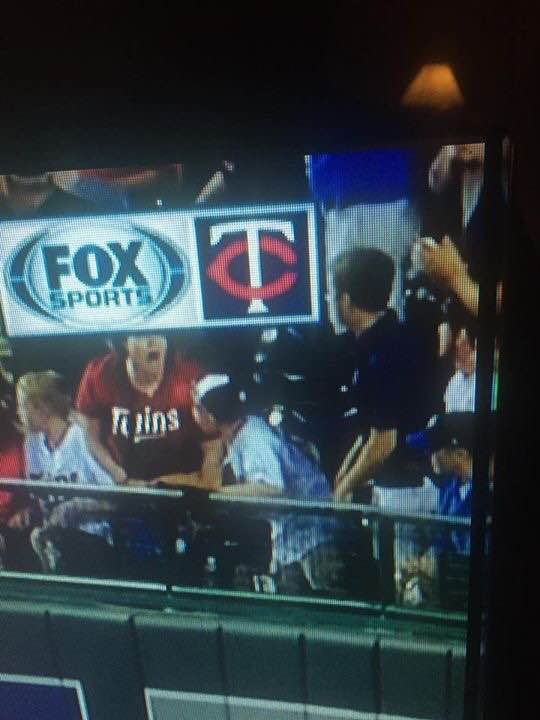 So what about Marin? She is neither a fan of birds or baseball. All it took to win her over was the promise of three nights in hotels with pools.  It helped that the kids thought these pools were awesome. 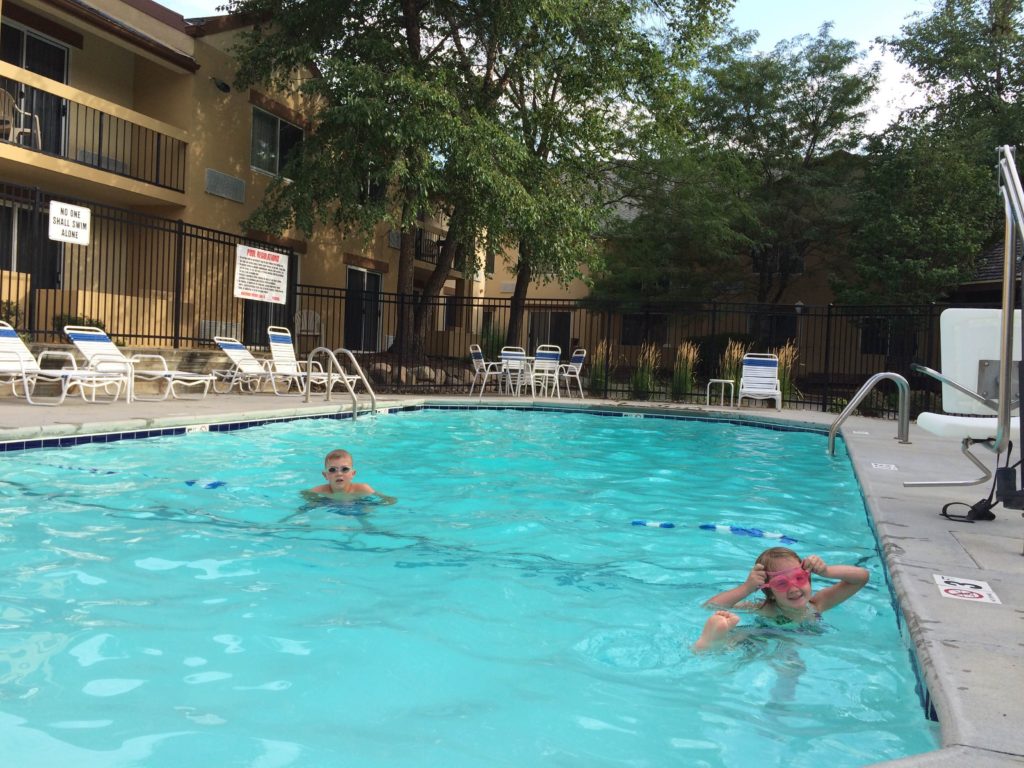 I mean, seriously, an indoor/outdoor pool where you can actually swim under the freaking wall of the hotel–how cool is that? This is the kind of thing that blows kids’ minds. 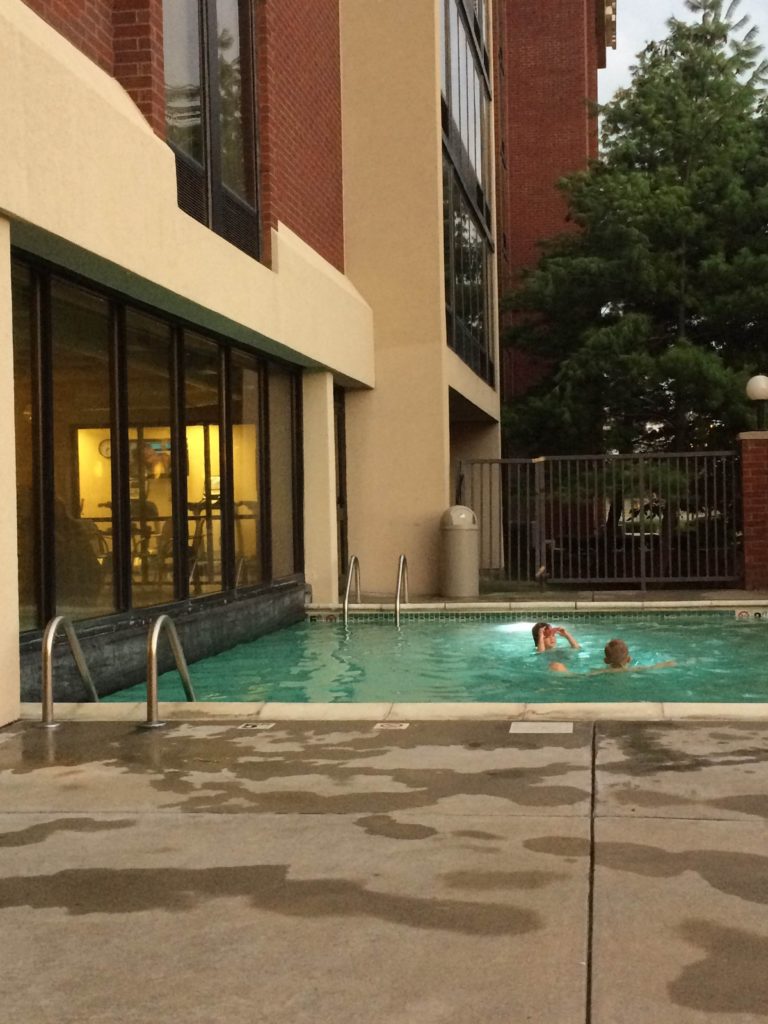 So what about the birds? Let’s get on with it then. I had a number of targets of regular breeders in this central part of the country. The first one I targeted is one that has caused me heartache on a couple of occasions in Minnesota, the Least Tern.  Since this bird breeds in shallow rivers with sandbars, Omaha is a great place to go after them because of the nearby Platte River.  Unfortunately, though, it was getting late in the year to find any, and my chances were slim. Regardless, we were going to give it a try, checking out a couple of spots on the way to our Omaha hotel. The first stop was a place I’d been watching on eBird for months and was eager to see, a sandpit lake in Fremont, Nebraska. 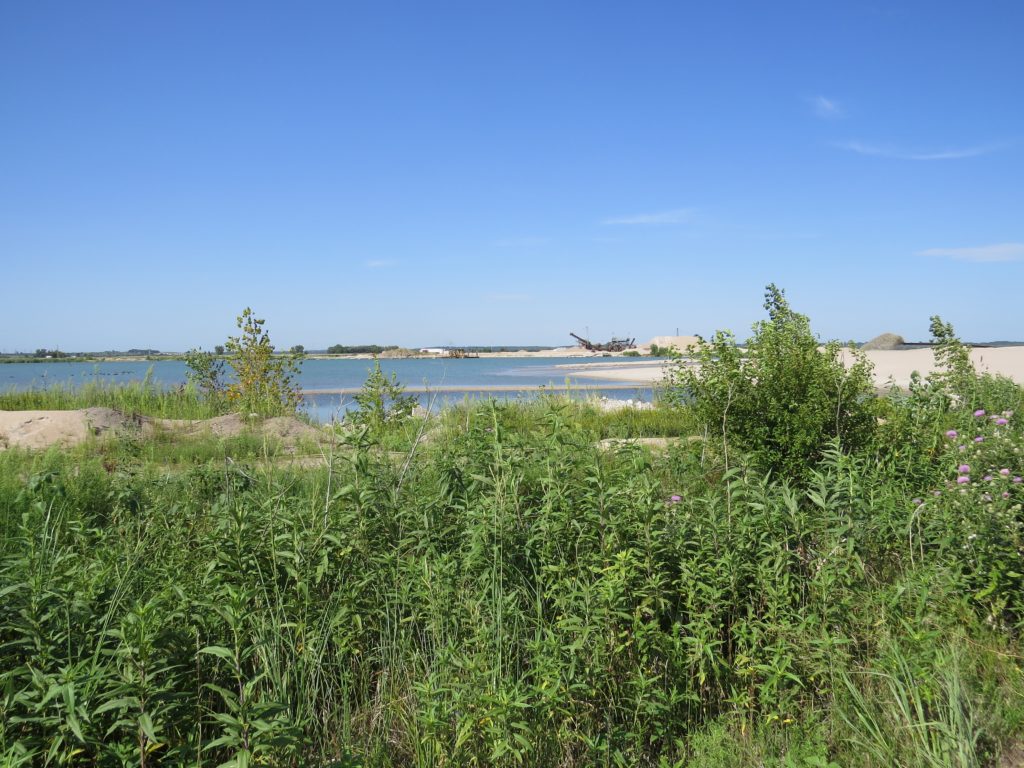 Upon initial inspection, I didn’t see what I came to see. I don’t know if I just overlooked it at first or if it flew in when I wasn’t looking, but after ten minutes I spotted a Least Tern bathing off a sandbar right in front of me! 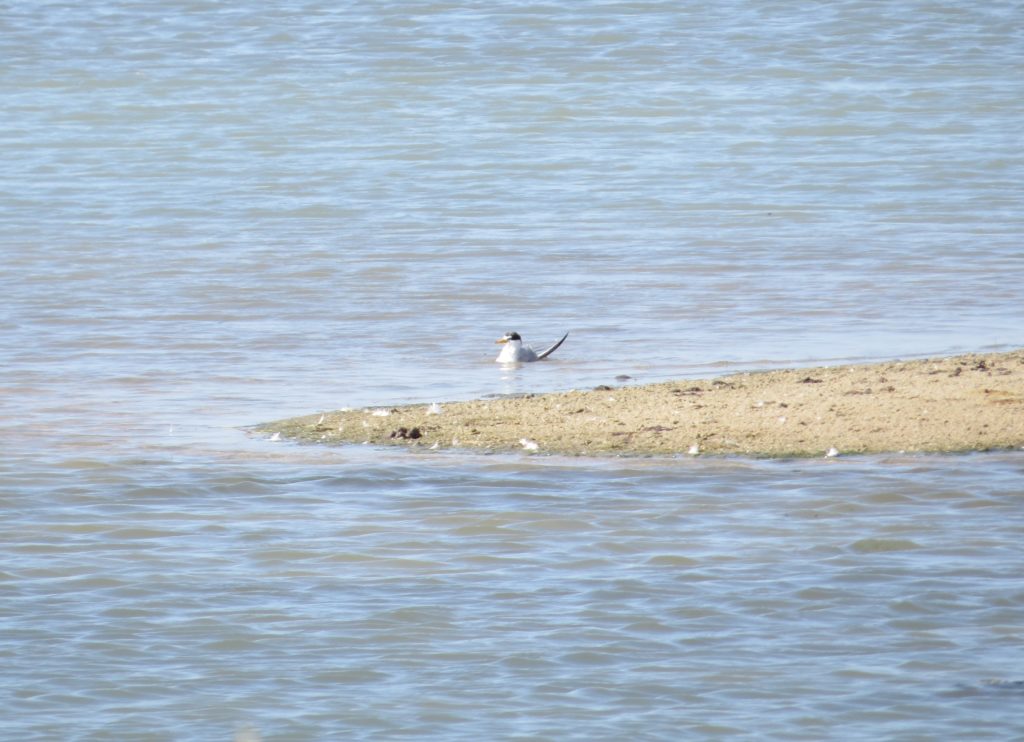 I’ve been yearning to see that bright yellow-bill for awhile.  My family waiting in the car probably didn’t even notice the fist-pumping going on outside over this lifer. 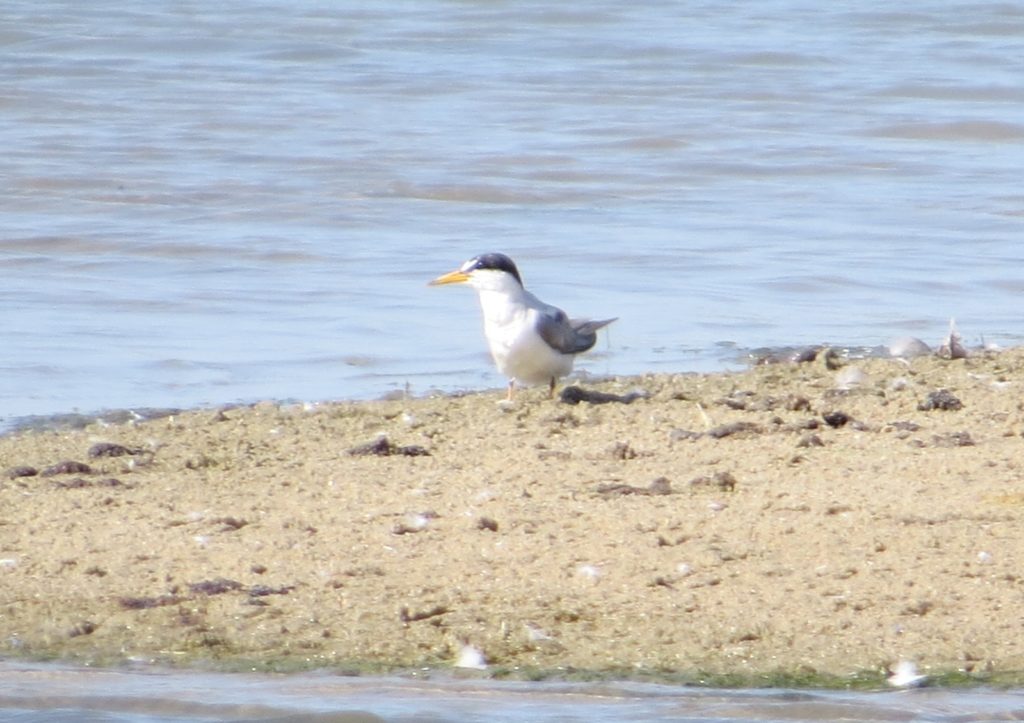 Getting a lifer at the first stop for that species keeps the non-birding family happy. And even better (for them) was that this bird only stuck around for 10 minutes before flying off forever.

The plan for Day 2 of our trip was to meander our way from Omaha to Kansas City via the back roads in the hopes of turning up a Scissor-tailed Flycatcher, the number-one target of the trip. STFL is a rarity in southern Nebraska even though northern Kansas is part of its normal range.  I decided to drive to a spot in southeastern Nebraska where a pair had nested in June.  There hadn’t been reports for two months, but I figured it was worth a shot anyway. When we were still five miles from the site, I was shocked when a Scissor-tailed Flycatcher lifer flew across the road in front of us. Unfortunately we could not track it down for better looks, so it was a bittersweet sighting. I wasn’t worried because I picked a southerly route that would put us by several reported STFL sightings in Kansas. But one-by-one as we drove by those sites, I was getting worried. We weren’t having any luck. Common Nighthawks are nice, but this was supposed to be a Scissor-tailed Flycatcher on this wire. 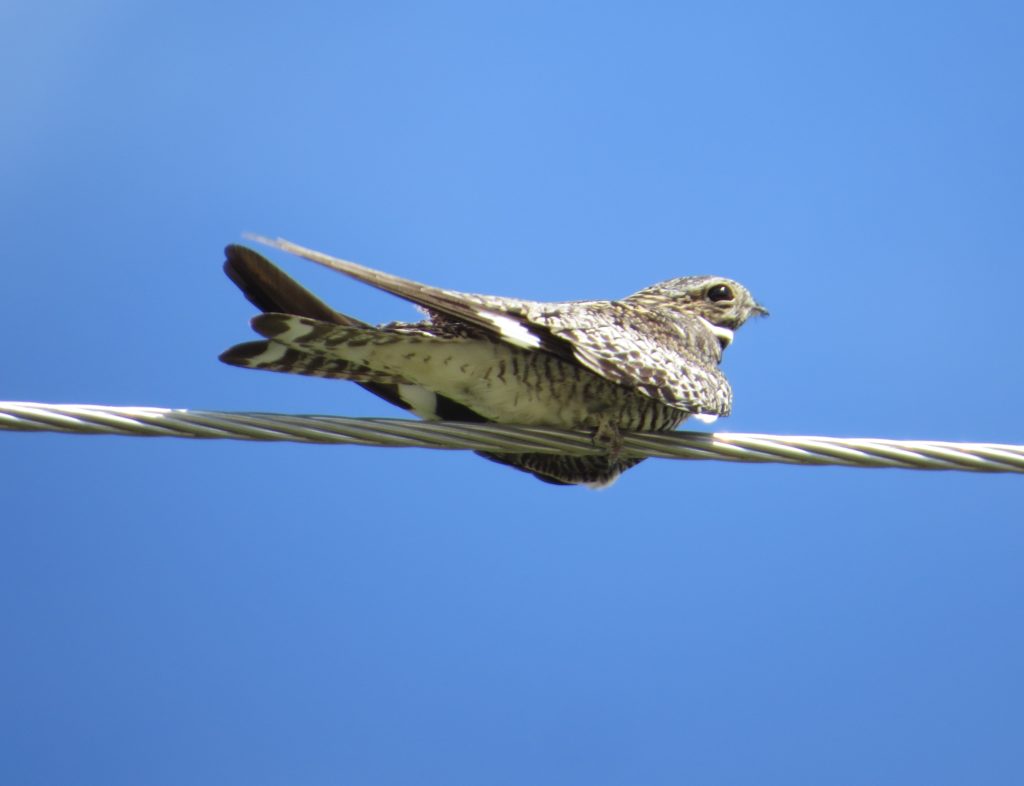 I was frustrated, but it was time to switch gears to look for another lifer at Baker Wetlands just outside of Lawrence, Kansas.  The Little Blue Heron shows up in Minnesota every few years, but I haven’t connected with one yet.  I was hoping to fix that here. It took awhile, but eventually we found a distant bird toward the far eastern end of the Baker Wetlands. I was going to settle for some blurry distant shots until Melissa noticed a service road that would put us closer to the bird.  What a fantastic-looking Heron. 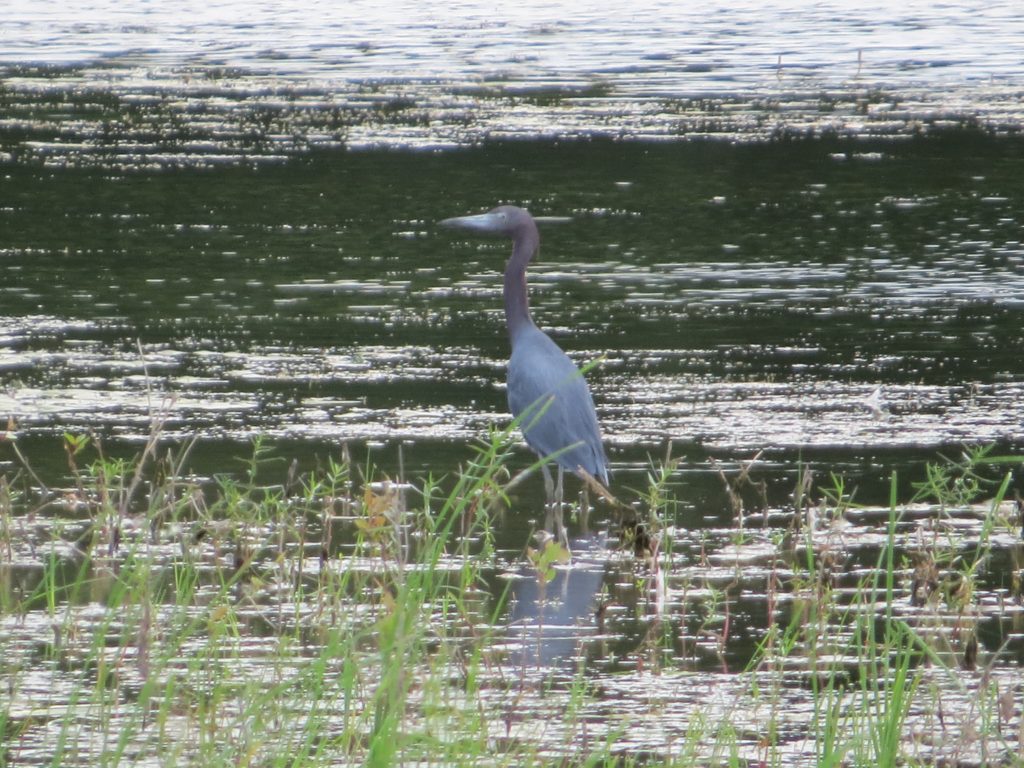 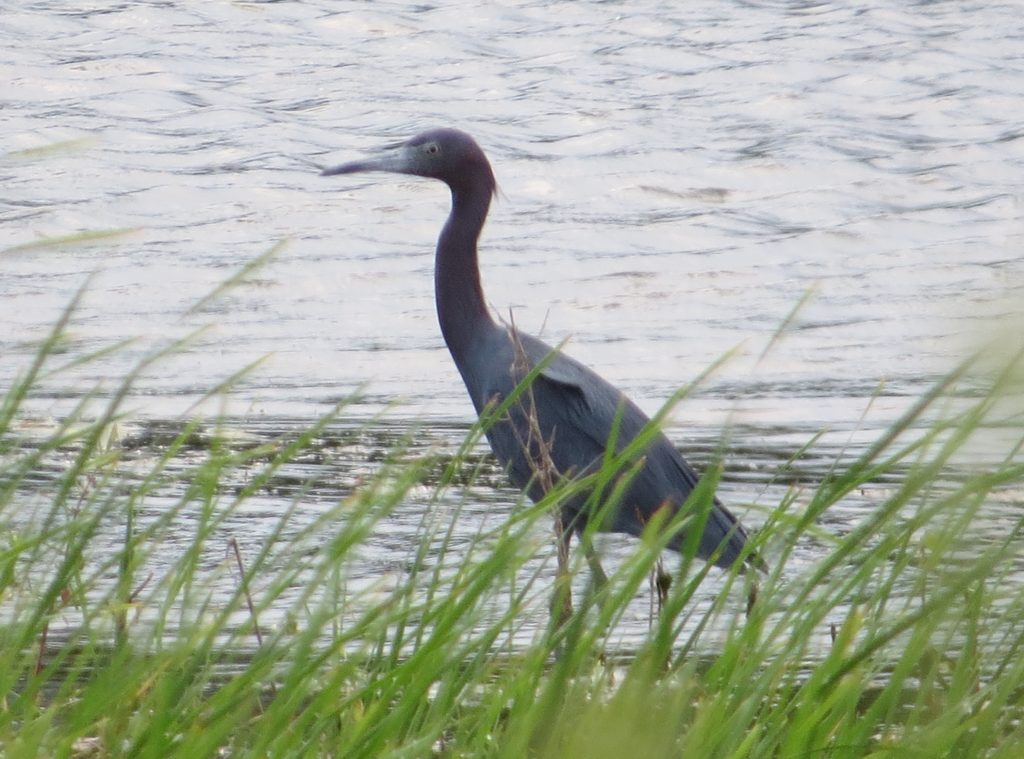 It was finally time to get to our hotel–Marin was getting antsy for a pool fix. The Heron lifer felt good, really good, but I was still bummed about the lack of Scissor-tailed Flycatchers. Then just 20 minutes from the hotel, I spied one on a fence and turned around for some looks. It was a STFL alright, but a nub-tailed one and not the big male I was hoping to see. Hopes for that, along with a few other birds, would have to be pinned on Day 3.

Day 3 would be an exciting one. My old friend and college roommate, Malcolm Gold, picked me up early that morning to help me find some of the birds I was looking for. Malcolm and I both got into birding long after college and have previously only birded once together back in 2013. Having lived in the KC area for a few years now, he knew where to go and was literally and figuratively in the driver’s seat for this outing.  It was good to see Malcolm again and nice to be with a local who knew what he was doing.  Malcolm thought we should try for a Painted Bunting right away along a brush-lined, somewhat abandoned road in an industrial area.  While a PABU would be sweet to land on the life list, I knew that late August was pushing it for having this bird still be around.  We never did find one, but Malcolm did point out a lifer of sorts, the Yellow-billed Cuckoo! Previously I had only ever heard one, so this was quite a treat to finally see one. 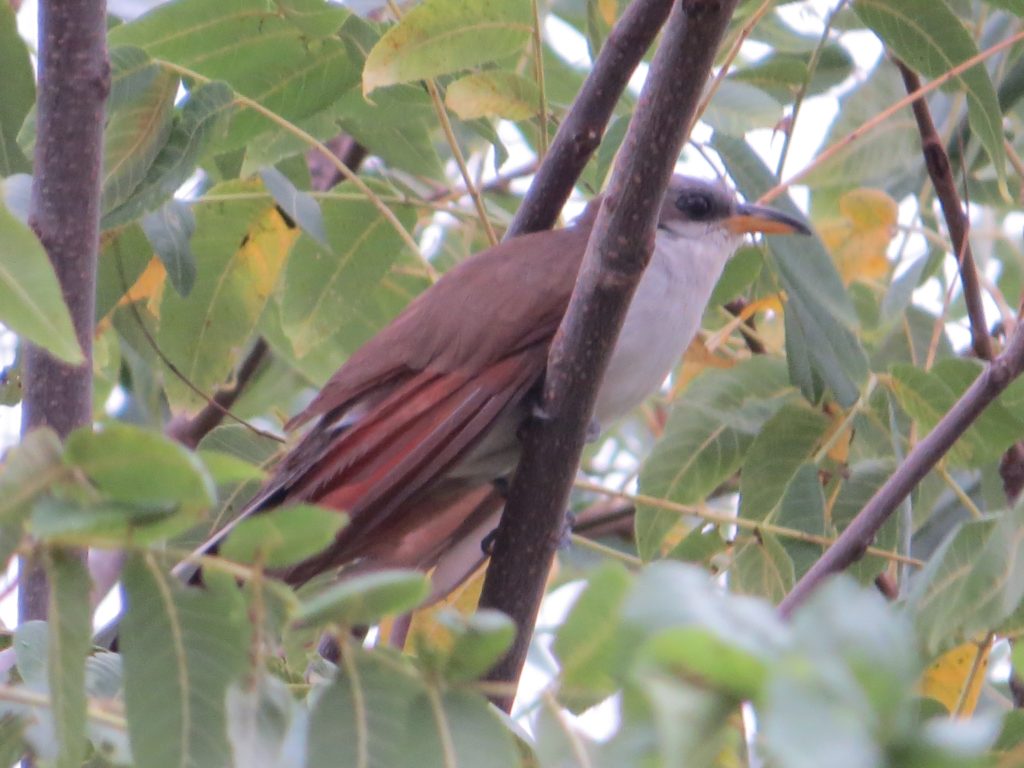 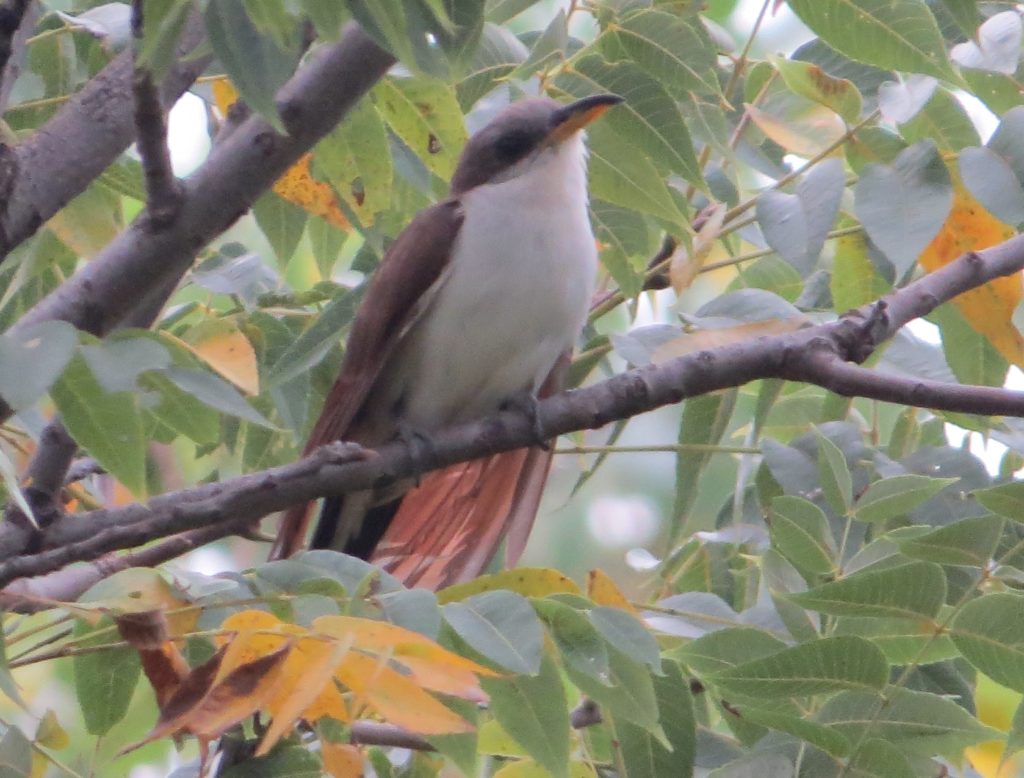 Shortly afterward we heard another hoped-for/expected lifer, the Carolina Wren.  Eventually I got to see a couple of them. Their tea-kettle song is awesome. 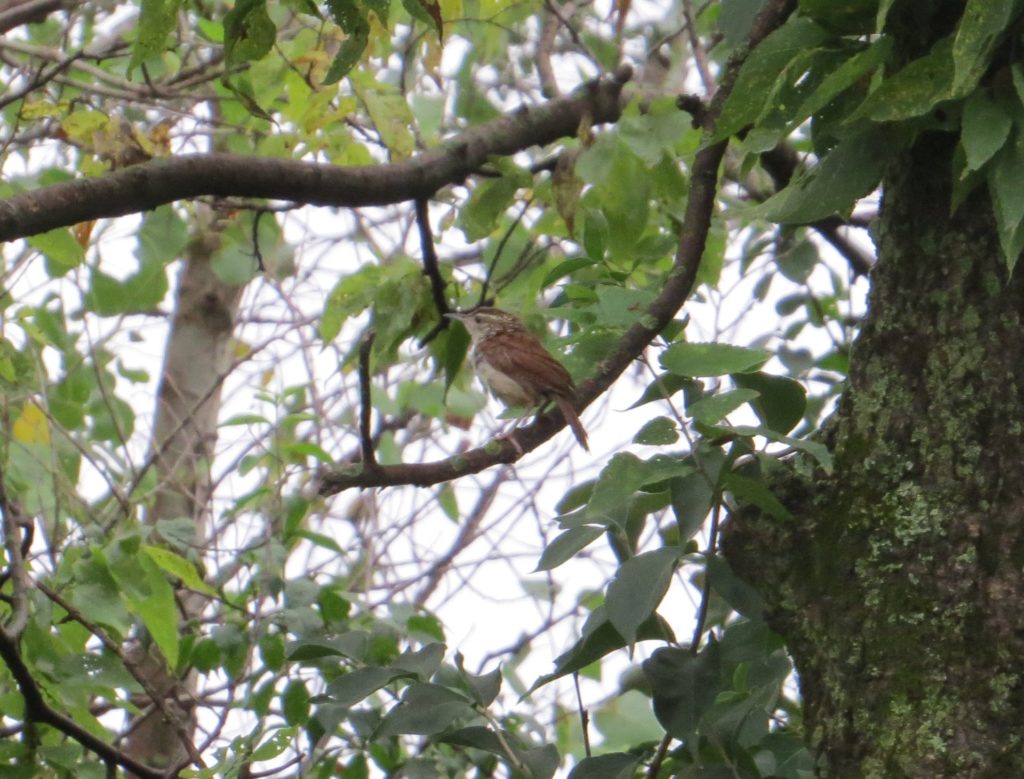 After giving up on the Painted Bunting search, we headed out into the countryside south of Kansas City. Malcolm had some ideas about where to find Scissor-tailed Flycatchers. And find them, we did. 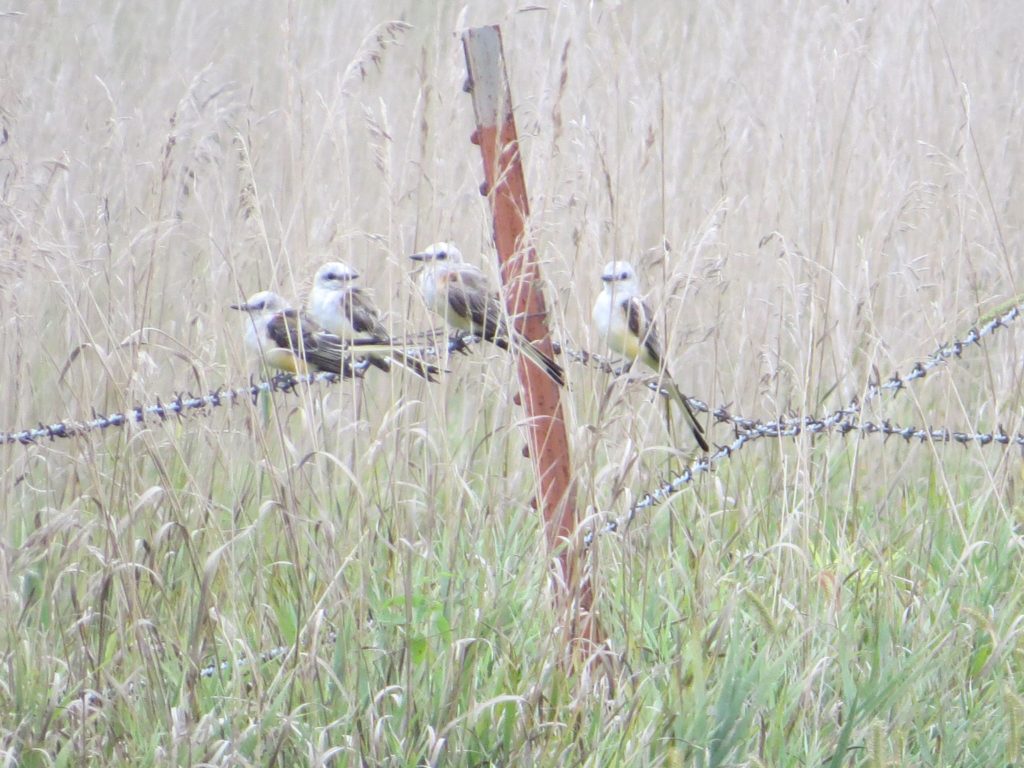 We never found any with super-long tails, but at one point we had about 30 of them all together on the wires and fences around us.  It was a crazy, cool sight even if most were nubby. 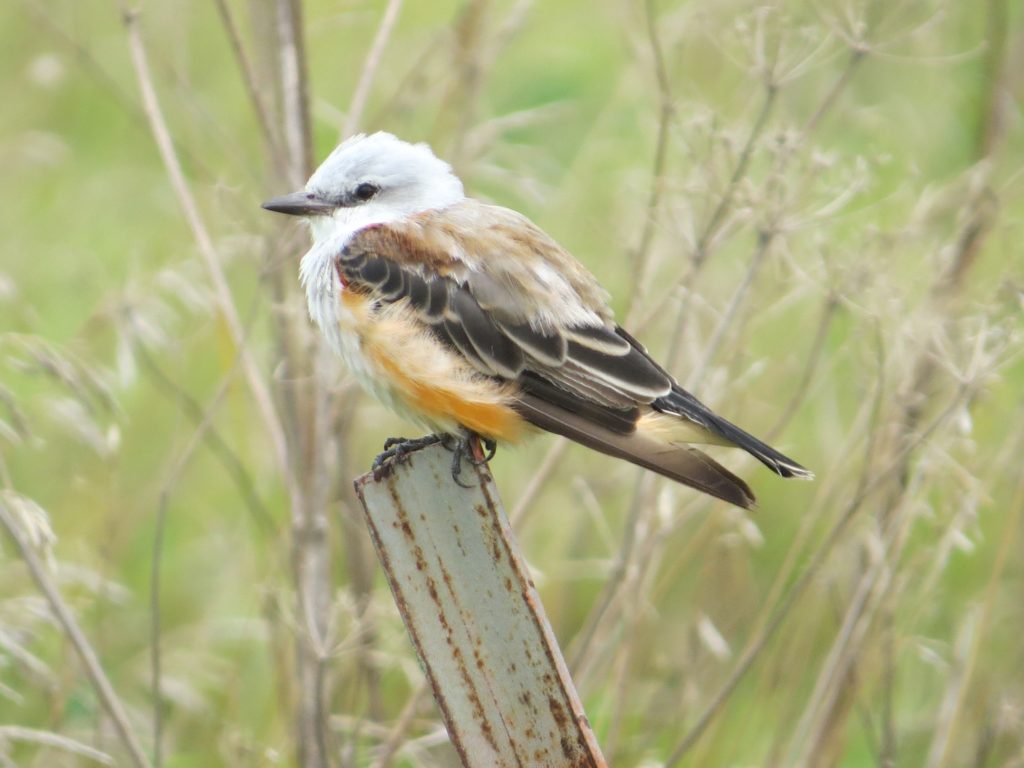 Some had tails of decent length, enough to showcase the big forked-tail when they flew. 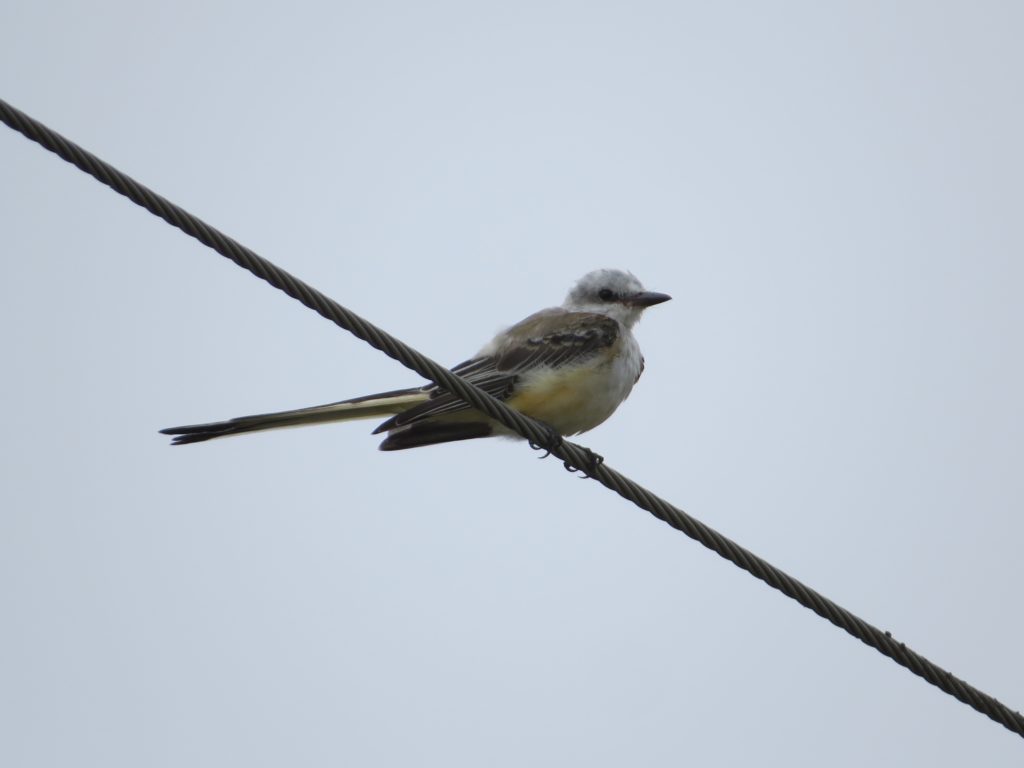 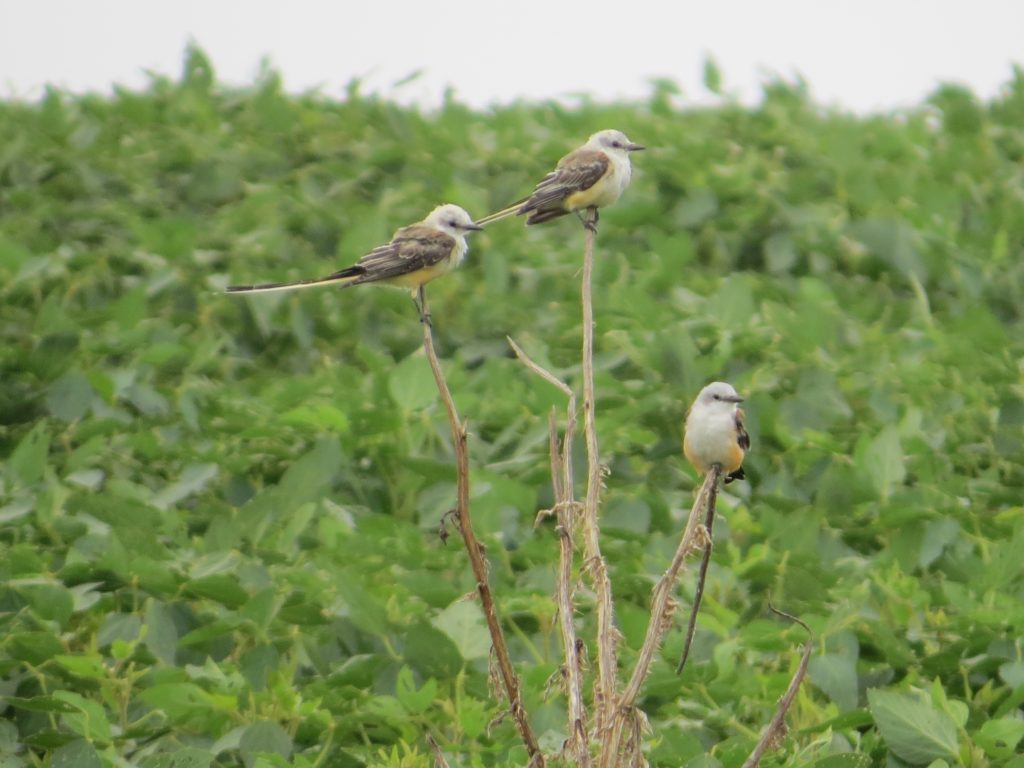 After enjoying the pile of Scissors for awhile, Malcolm took me to a spot to look/listen for Northern Bobwhite.  We weren’t having any luck, so for the heck of it I tried playing a recording. Almost immediately a Northern Bobwhite called back!  We never did see one, so this bird will have to enter the life list as a heard-only.  I’m okay with that.

Here’s a tip for you when going on a trip like this: set aside a limited amount of time to go birding away from the family and stick to it; don’t get greedy.  With just a little over an hour left to bird before I had to be back to the hotel at noon, Malcolm took me through some neighborhoods near our hotel to try to dig out a lifer Mississippi Kite.  MIKI just wasn’t in the cards for us that day.  Even though we were Kite-less, it was a great morning of birding with a friend. Thanks Malcolm! After he dropped me off, the agenda switched to getting some authentic KC barbecue and going to the K to see the Twins. On the way to the game I was 95% certain I saw a Mississippi Kite gliding above the freeway, but I didn’t claim it.

Day 4 was the return trip home. This time we would be taking the freeways to bust home quickly. Before we left town, though, I wanted to check along a certain street in the KC suburb of Shawnee for one last try at a Mississippi Kite. Almost right away we saw a raptor that looked odd to us lift off a pole. In fact, Evan who didn’t really know I was still looking for a Kite, piped up from the back seat, “Dad, I think I just saw a Mississippi Kite.” I thought so too, but we needed something better. After cruising up and down the street a couple times we finally had a no-doubt-about-it sighting as one flew over. After a couple more up-and-down passes on the street, we saw it again and this time it perched in someone’s backyard tree offering incredible views of our newest lifer. 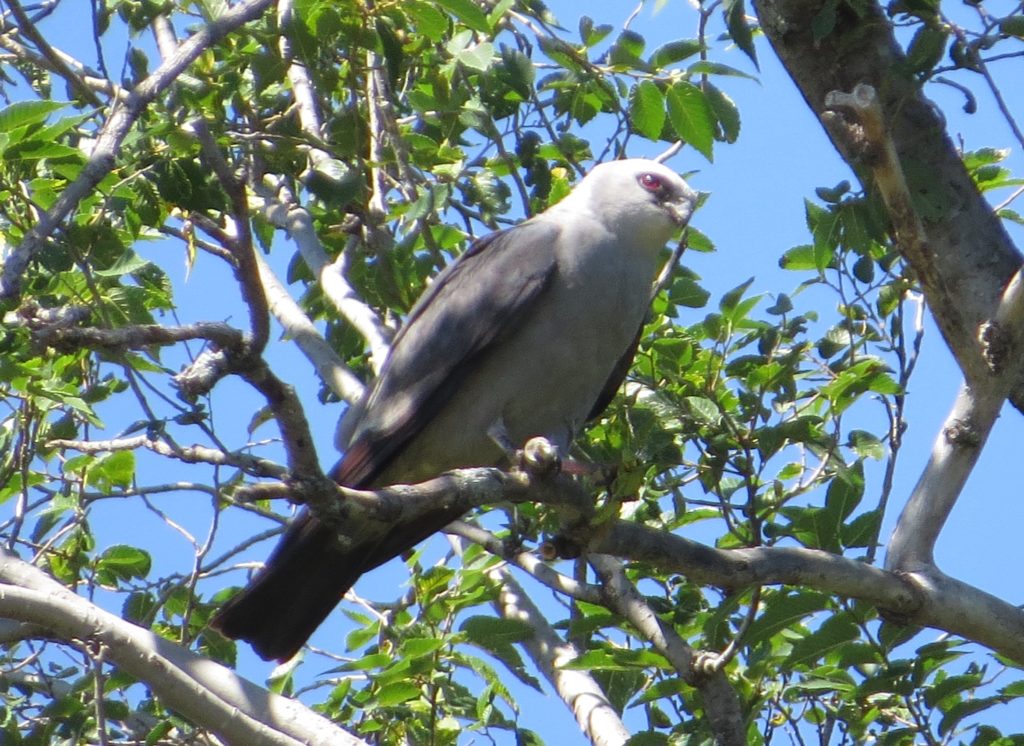 Malcolm had told me that MIKIs catch dragonflies on the wing, and that’s exactly what this one had done. 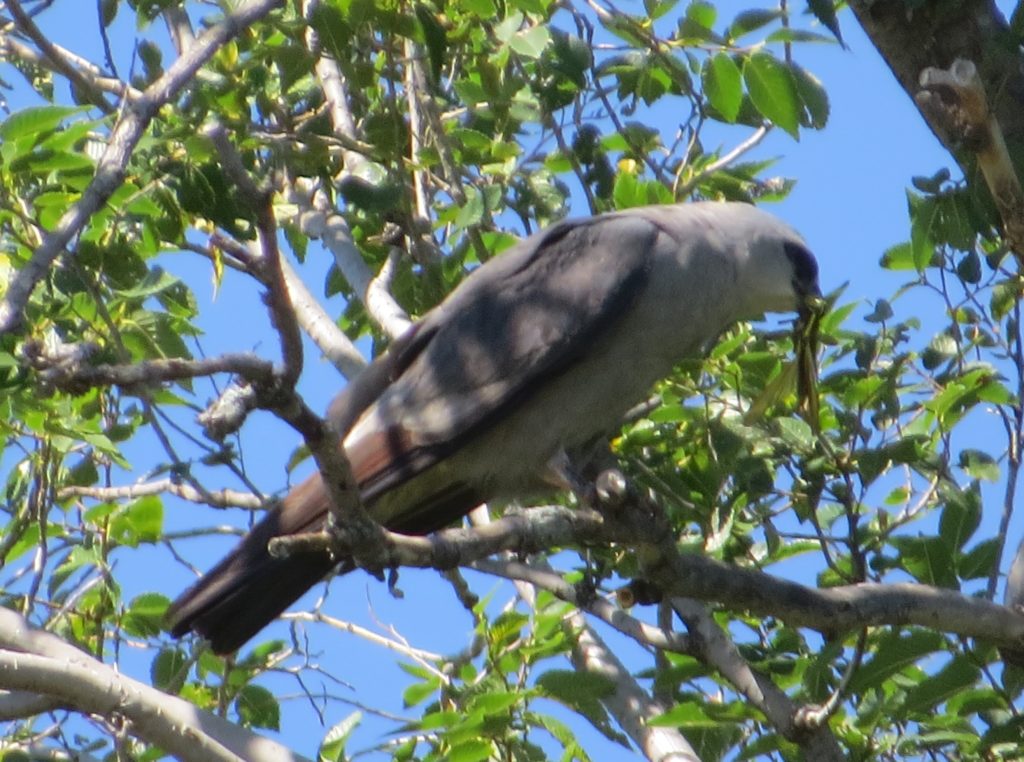 But then I noticed there was a juvenile MIKI. That dragonfly was the dinner that its mom or dad brought back for it. 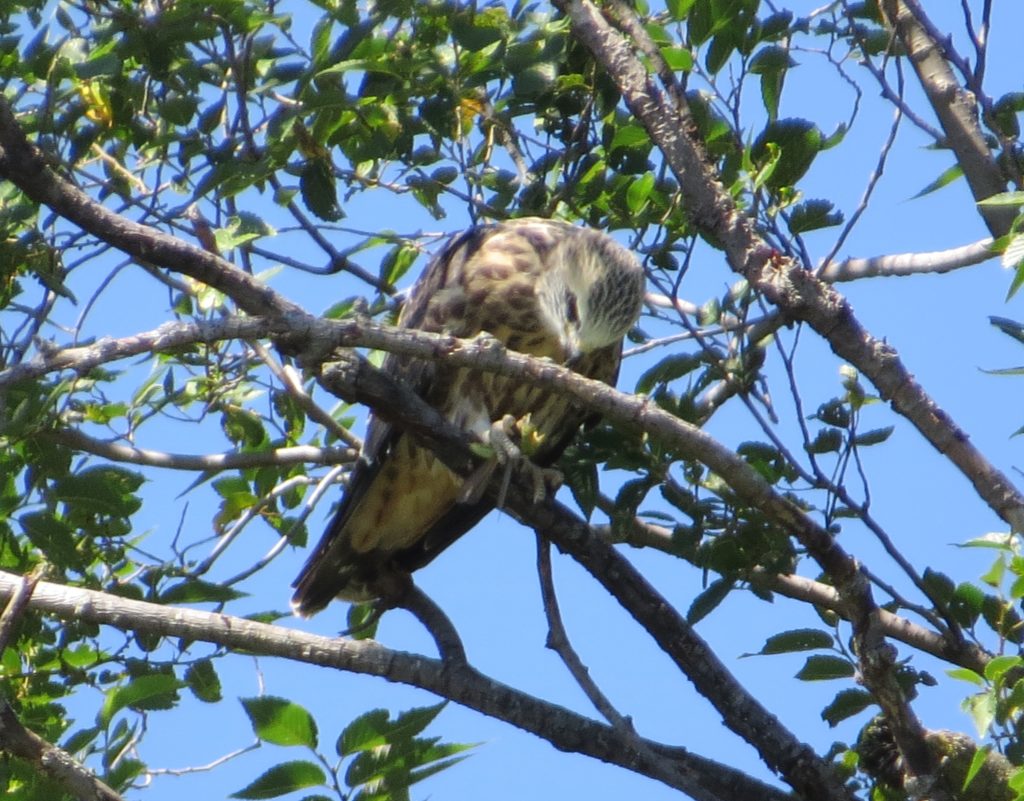 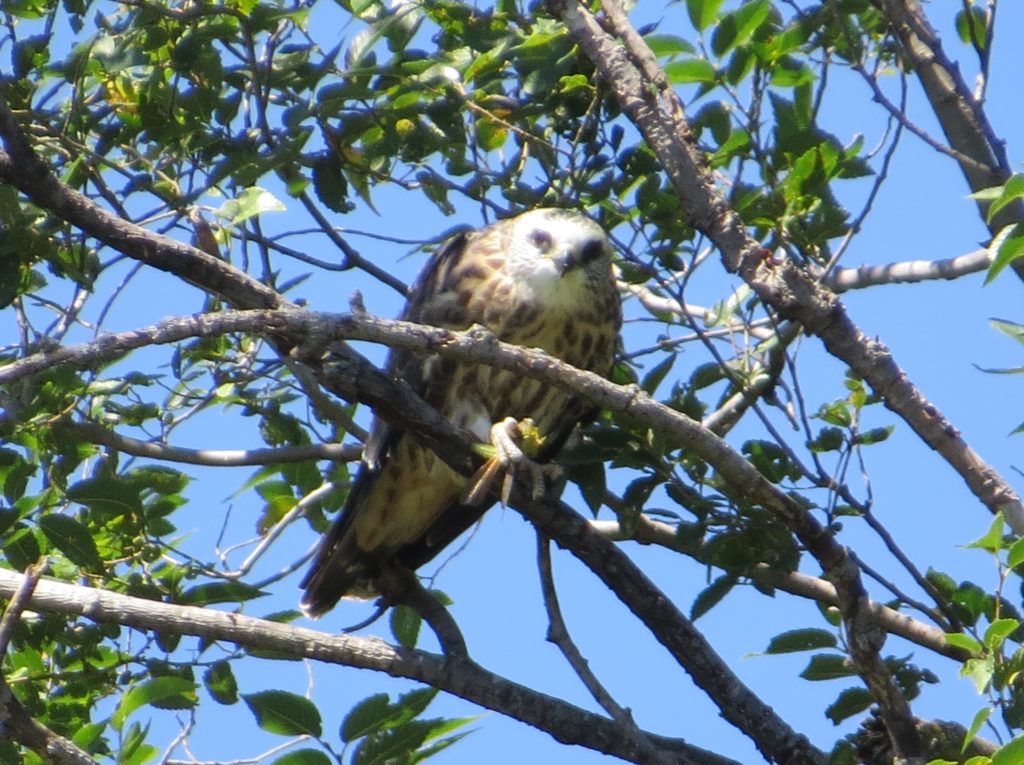 After the dragonfly transfer had been made, the adult took to the skies to find another. Seeing these birds glide around gracefully like their namesake is quite the sight. 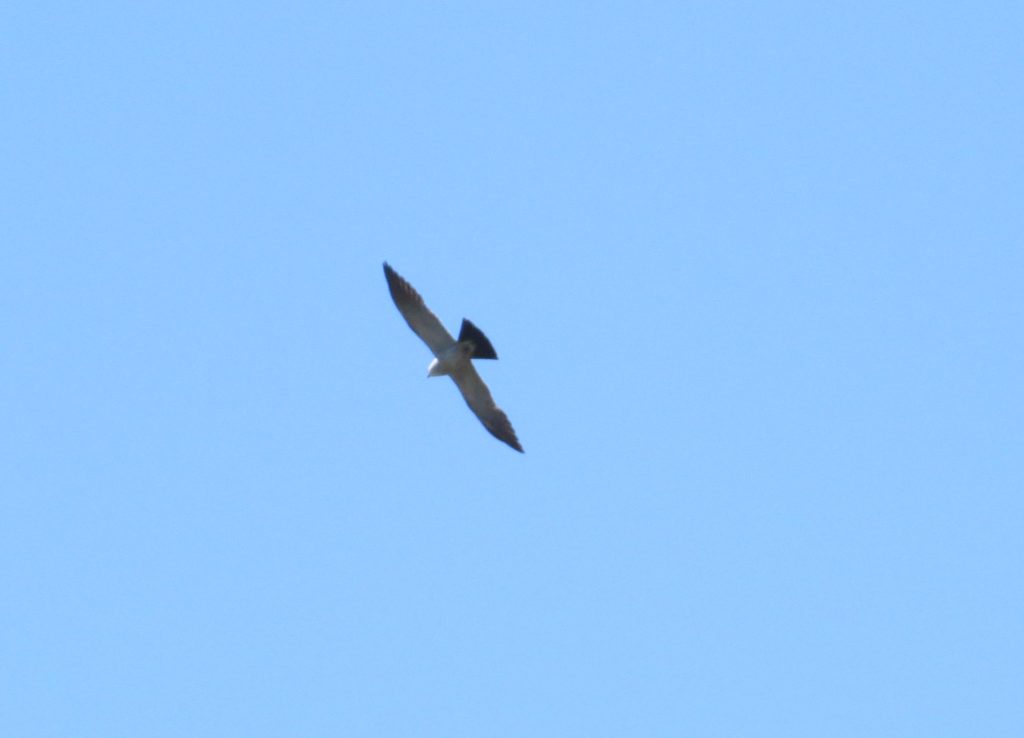 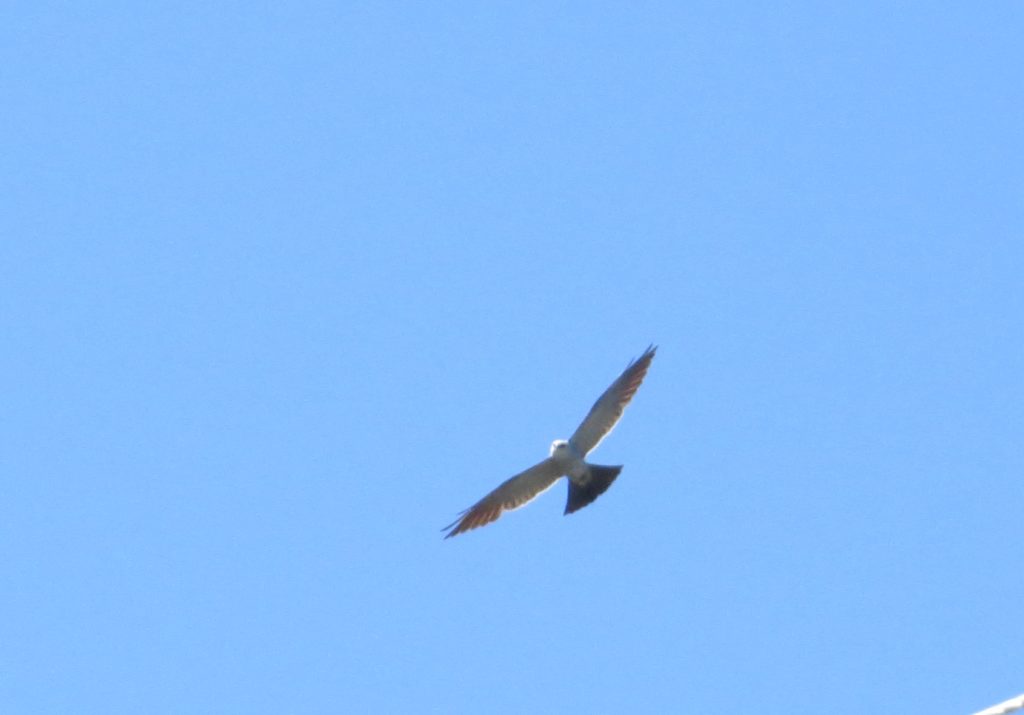 Having now seen one fly, Evan and I are certain we did see one the previous day on the way to the Twins game. This experience has also given me confidence that I would recognize this unique silhouette should I see it in the skies over Minnesota some day.

With the Mississippi Kite, I had now seen all the lifers I thought I had a chance of seeing on the KC adventure.  It was a great way to finish the trip.  There were six lifers in all, seven if you count the Cuckoo, and a lifer was seen on each of the four days we were gone. It was a great trip of baseball, pools, and birds. Everyone went home happy.