The prime target at Necedah National Wildlife Refuge was, of course, the endangered Whooping Crane.  But there were so many other good birds there, birds that have also faced steep population declines.  In reflecting on how I’d write about the rest of our birding at Necedah NWR, I decided to do two more posts, each focused on a singular, struggling species that we saw.

This post will be on the near-threatened Golden-winged Warbler.  Tommy, Evan, and I were fortunate to find a male Golden-wing on territory at the Refuge.  This was a key lifer for Tommy, and like the Cerulean, it was a bird I had only seen just a few times prior.  This observation marked the first time I had seen one on its breeding territory outside of migration. As such, it was the first time I got to see and hear one sing. 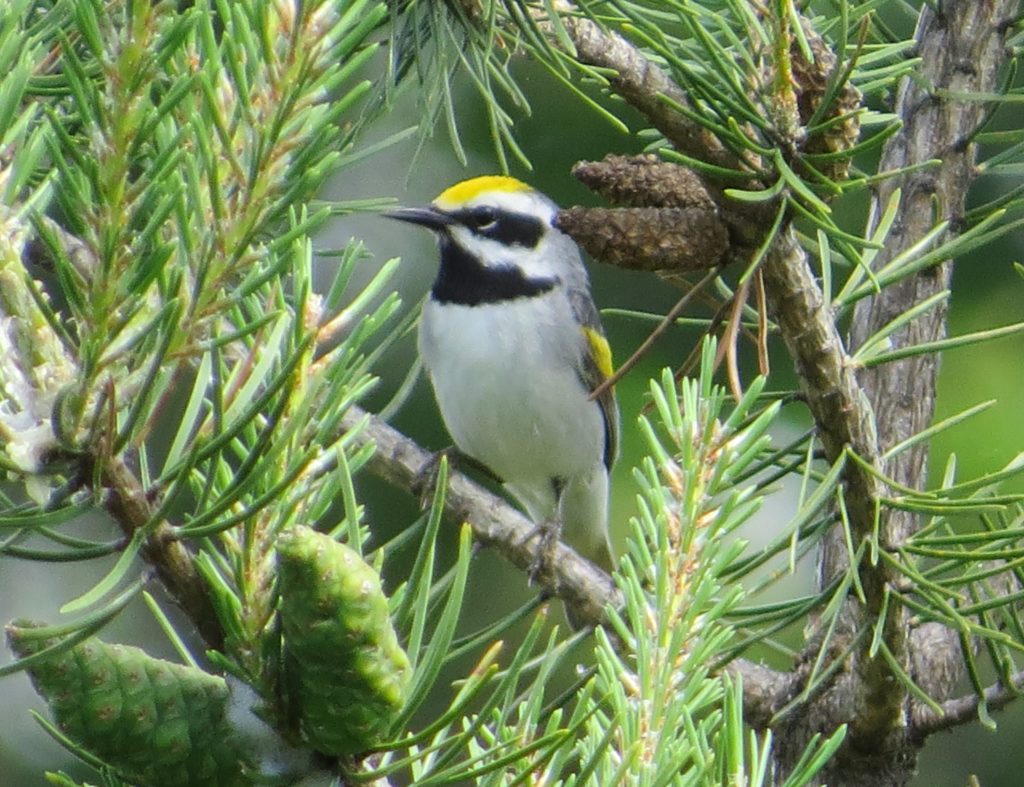 If Minnesota did not already claim (appropriately) the Common Loon as its state bird, the GWWA would make a fine choice.  Minnesota plays host to roughly 50% of the world’s entire breeding population of this Warbler species.  Wisconsin and Ontario are the other major stakeholders in rearing these birds.  Maybe if most Wisconsinites knew this, they’d hold a referendum to denounce the Robin as their state bird and choose this Warbler instead. 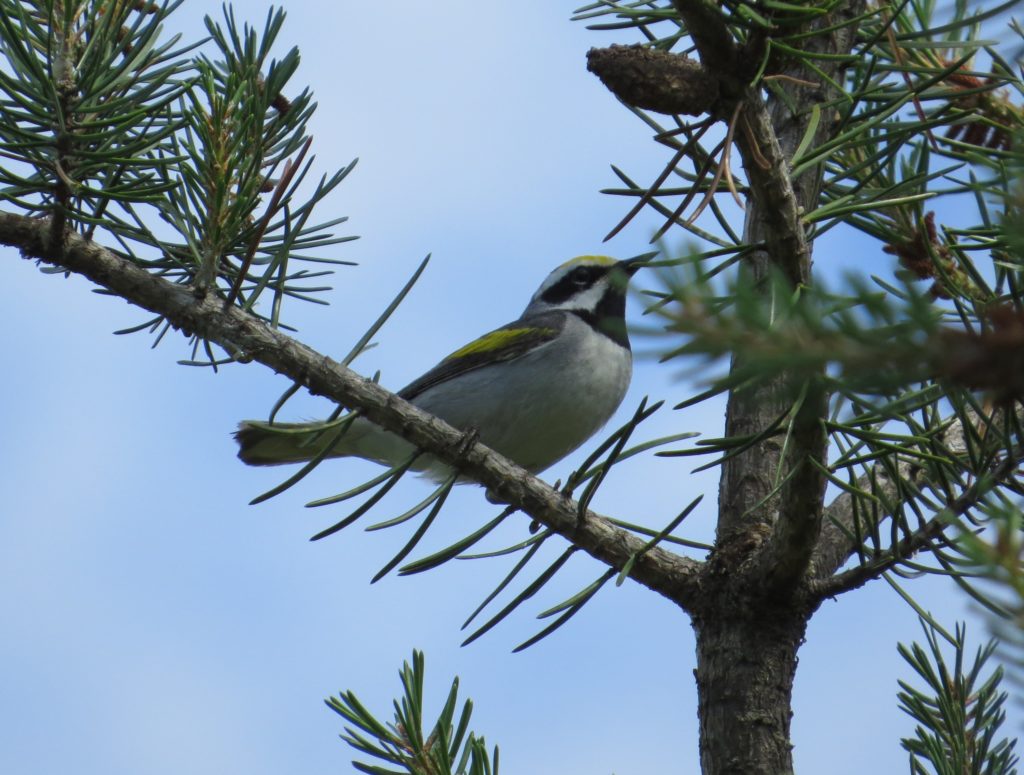 The Golden-wing’s preferred habitat is shrubby edges along wetlands and young forests. While the breeding population has remained stable in Minnesota over the last 45 years, this species has suffered a 60% population loss over that same time in the rest of its breeding range in North America.  Even though Minnesota contains only 10% of the GWWA’s breeding range, we host nearly half of all the birds of this species.  That puts an emphasis on just how much human development of wetlands and shrubby areas in other parts of the northeast has impacted this bird.

Despite Minnesota and Wisconsin being a major stronghold for this bird, the future is unclear for them here too.  GWWAs are early successional specialists that benefit from young forests that emerge after logging and/or fire.  With better fire control than ever and a decline in logging activity, prime habitat areas for the Golden-winged Warbler are growing up and not being “renewed” as often. Below is my favorite photo I took of the bird we observed because it shows the bird in a young Aspen tree, stands of which are prime habitat for this bird. 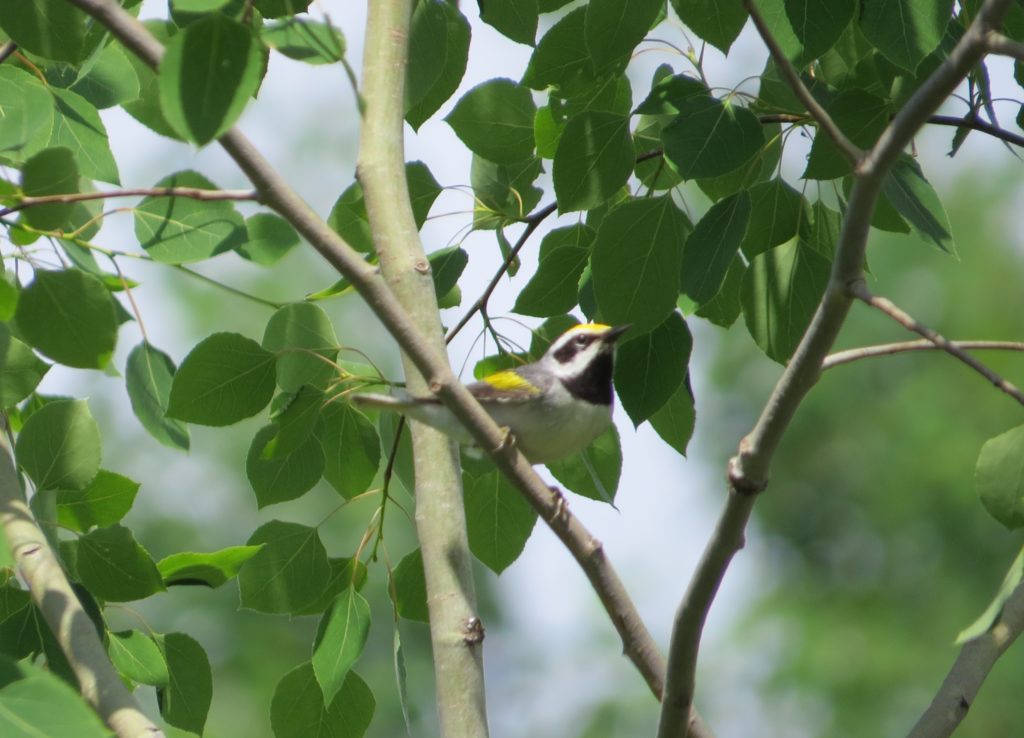 Besides human activity threatening this Warbler, the closely related Blue-winged Warbler is expanding its range in Minnesota.  This is problematic because the more dominant Blue-wings prefer the same type of habitat. 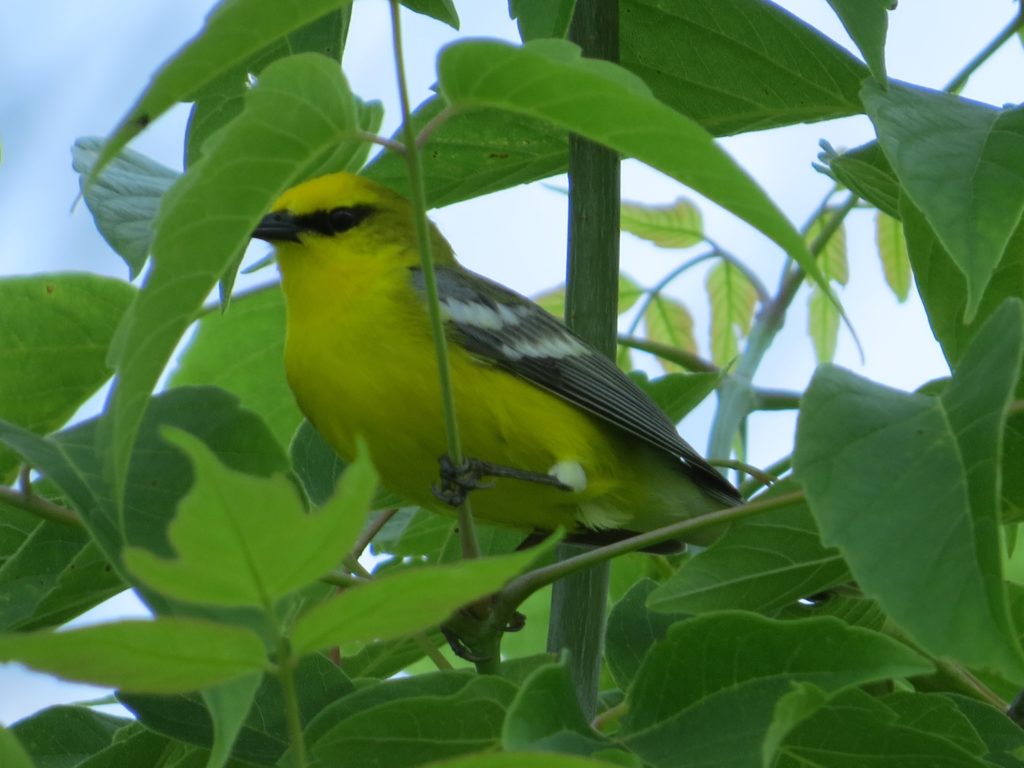 And when the Blue-wings aren’t kicking out the Golden-wings, they are hybridizing with them.  I have yet to see one of the two main hybrids.

I’m not sure what Wisconsin is doing regarding the conservation of this Warbler, but I’m proud of my state for taking their responsibility seriously as stewards of this bird. Something going on that’s pretty cool in Minnesota is that in 2015, the U.S. Fish and Wildlife Service signed an agreement with the Red Lake Band of Chippewa to restore 1,000 acres of Golden-winged Warbler habitat each year for the next 12 years. 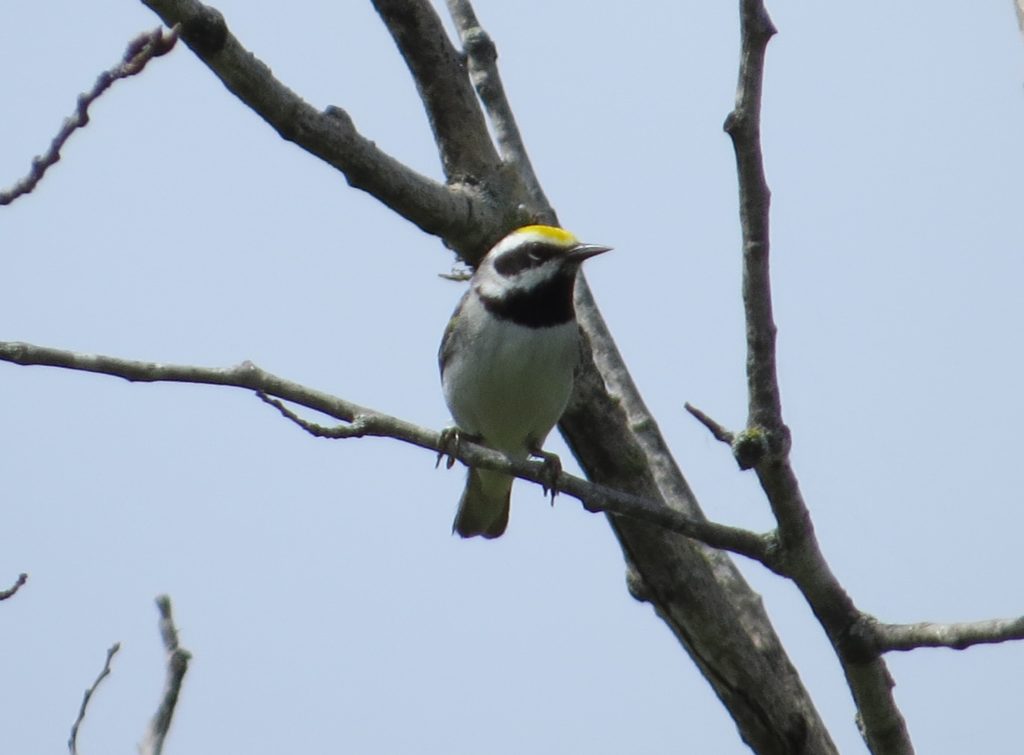 Like the Cerulean Warbler, the Golden-winged Warbler also winters in Central and South America, thriving in shade-grown coffee plantations.  Again, another reminder to drink bird-friendly coffee.  This beautiful home-grown bird is truly a treasure that needs all the help it can get. 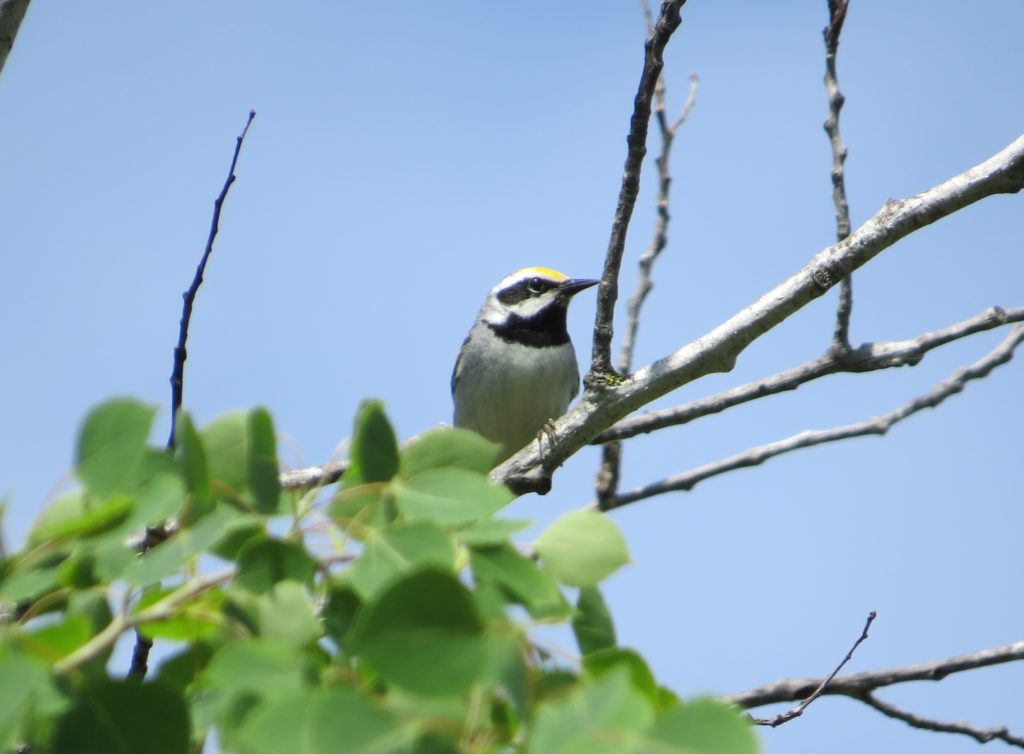 Knowing how fragile a species is makes you appreciate a sighting like ours all the more. Hopefully the Golden-winged Warbler has a bright future. 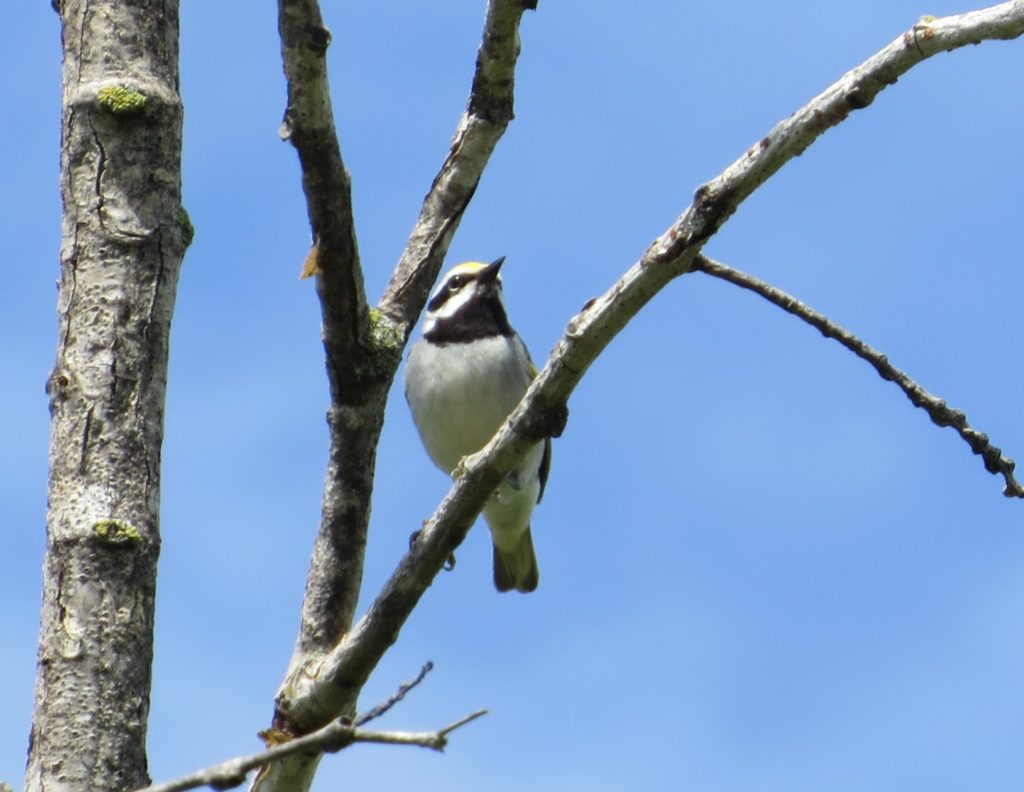 Coming up: another stunning bird that is not just surviving but truly thriving at the beautiful Necedah National Wildlife Refuge in central Wisconsin.

4 thoughts on “Necedah: Refuge for the Golden-winged Warbler”