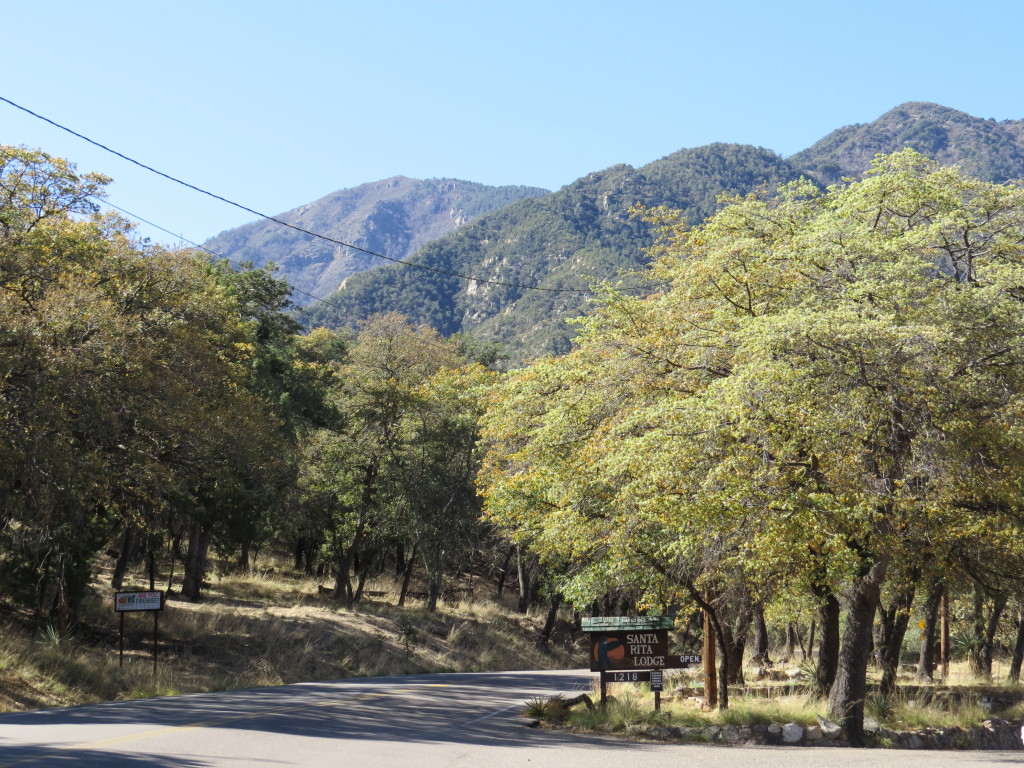 Madera Canyon. Wow.  What a thrill it was to be on the hallowed birding ground of which I’ve only read about in books and blog posts.  Tommy DeBardeleben and Gordon Karre had brought me here after an already successful morning of 18 life birds accumulated at stops on Mt. Lemmon and at Florida Canyon.  Yet, my number one target was still not in the bag; the Elegant Trogon, or lack thereof, was now a pressing weight on us all.  Despite this, we had about an hour’s worth of time before Tommy and Gordon would bring me to my Green Valley hotel.  That time would be spent picking up miscellaneous lifers so that the next morning would strictly be all about the Trogon.

Again my stomach bug was preventing me from enjoying every second, but I kept dragging myself out of the car and taking pictures of birds, knowing that I’d be able to enjoy it all later.  The first place we stopped were the feeders at Santa Rita Lodge.  The first life bird was a Mexican Jay. 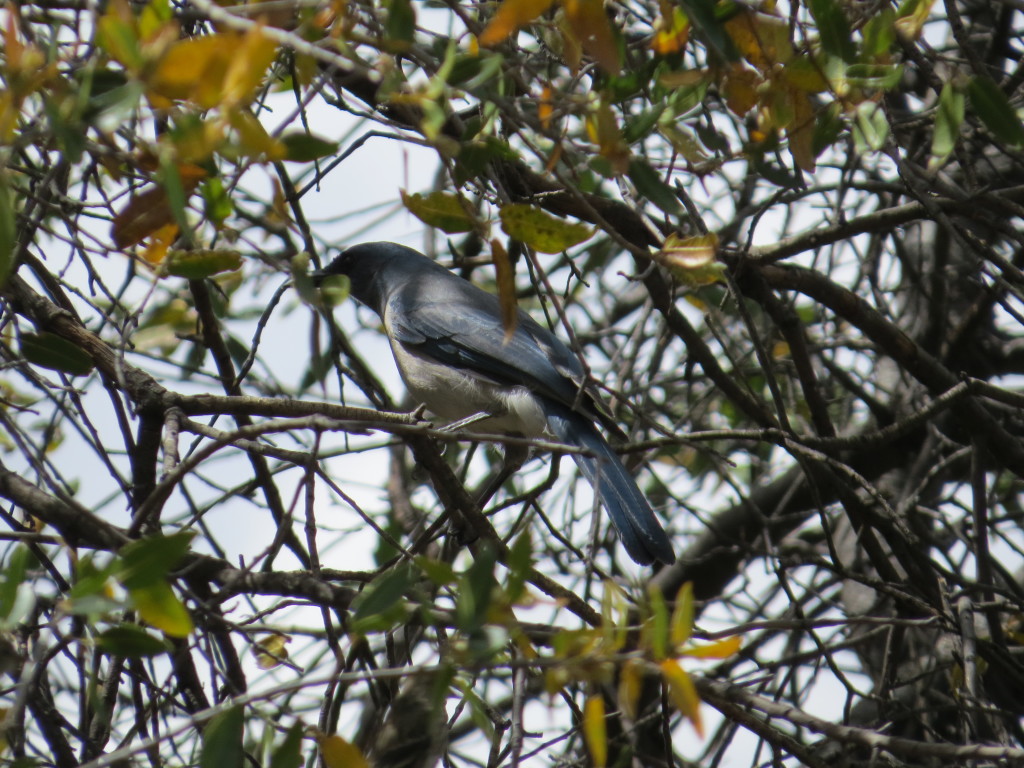 The Broad-billed Hummingbirds were as thick as flies around the feeding station. I am not sorry I am forcing you to look at another Broad-billed shot.  Drink it in.  It will be the last Broad-billed you see on this blog in 2015. 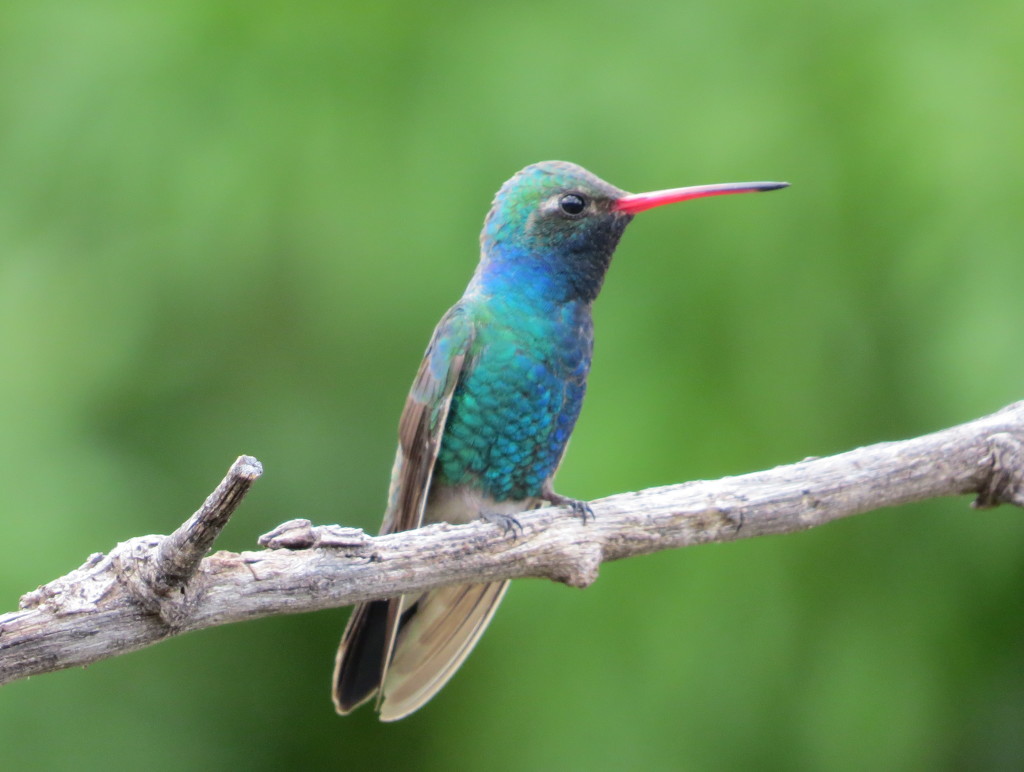 Acorn Woodpeckers were a little more down to earth at the Santa Rita Lodge.  This guy and a buddy were clowning around, practicing their dismembered wing illusion for all the Santa Rita guests.  Well-fed birds must occupy their surplus of time somehow after all. 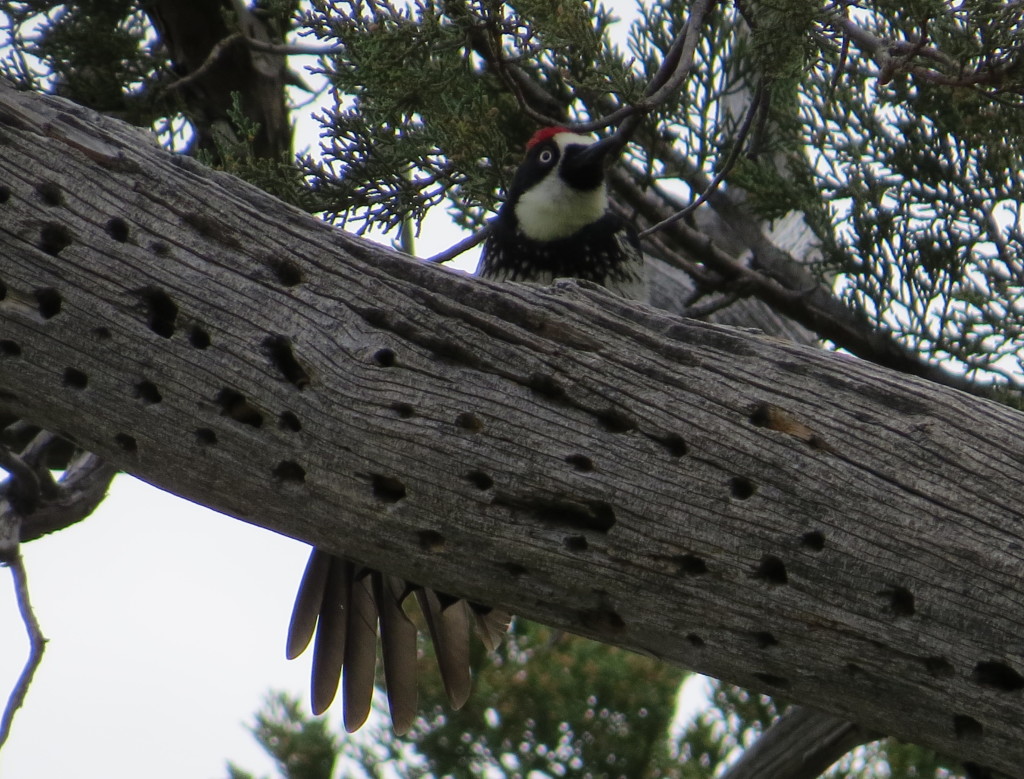 The second lifer of Madera Canyon was a Red-naped Sapsucker.  I am impressed with this bird’s limited range and rarity, but I have to say our Yellow-bellied Sapsucker variety back home has it beat, mostly because its name has better potential for insulting someone. 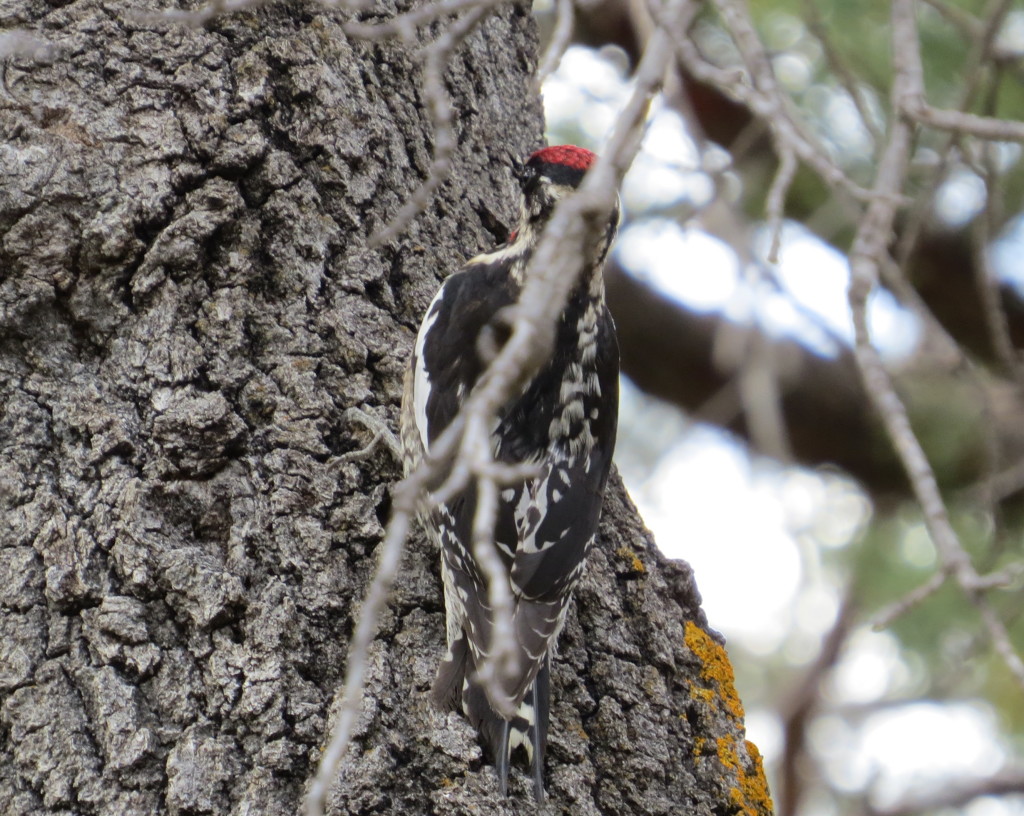 The third Madera lifer that Tommy and Gordon found me was a pair of nesting Canyon Wrens hanging out on the Santa Rita Lodge owner’s personal house and fence.  As compensation for free lodging, the Canyon Wrens provide home security. 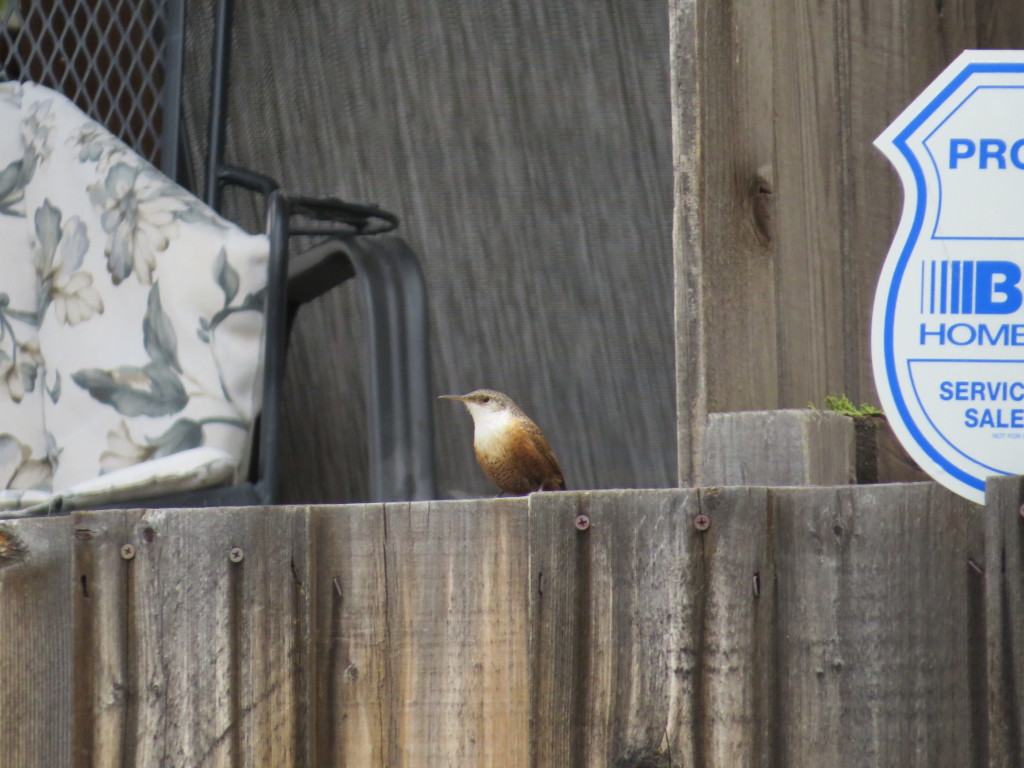 Tommy and Gordon were right–Canyon Wren is the best Wren. 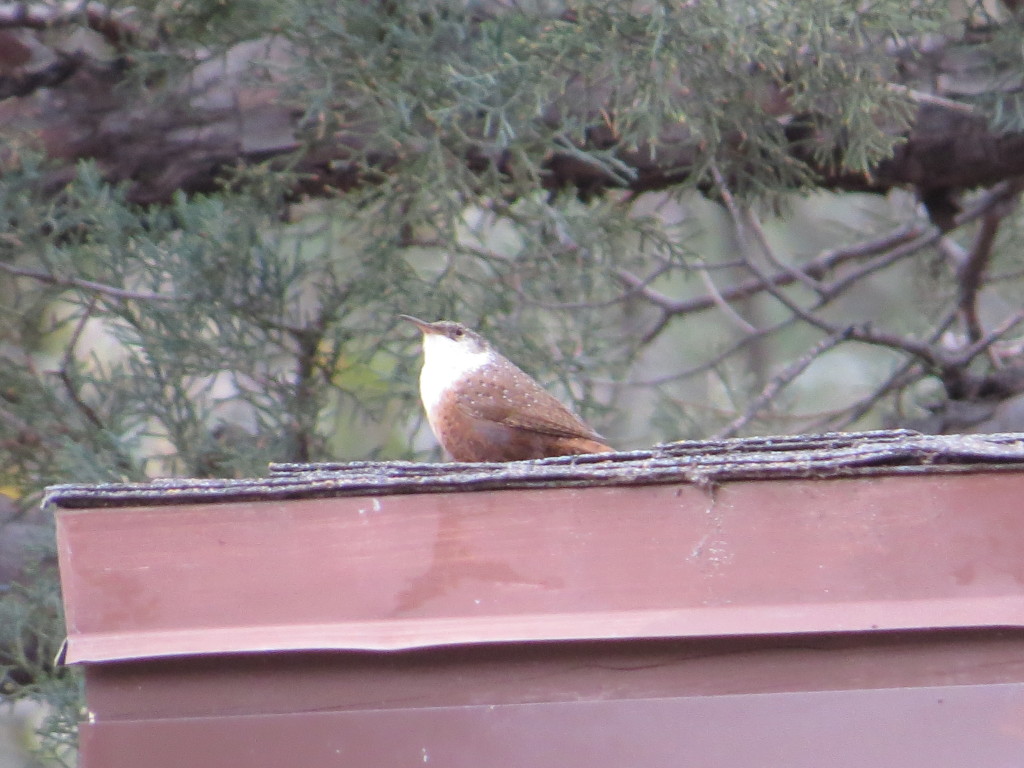 Not long after this I was able to lifer on Bridled Titmouse.  It was frustrating that these birds didn’t give better looks because this was a bird I had really wanted to see well.  That brought the lifer total for Madera Canyon up to four, but Tommy and Gordon had gotten over that number since we shattered it at Florida Canyon.

After 20 minutes or so at the Santa Rita Lodge, we ventured further up Madera Canyon to the feeders at Kubo Bed&Breakfast.  There were a few Hummingbirds around.  One stuck out as it dwarfed the rest.  It was my magnificent Magnificent Hummingbird lifer. 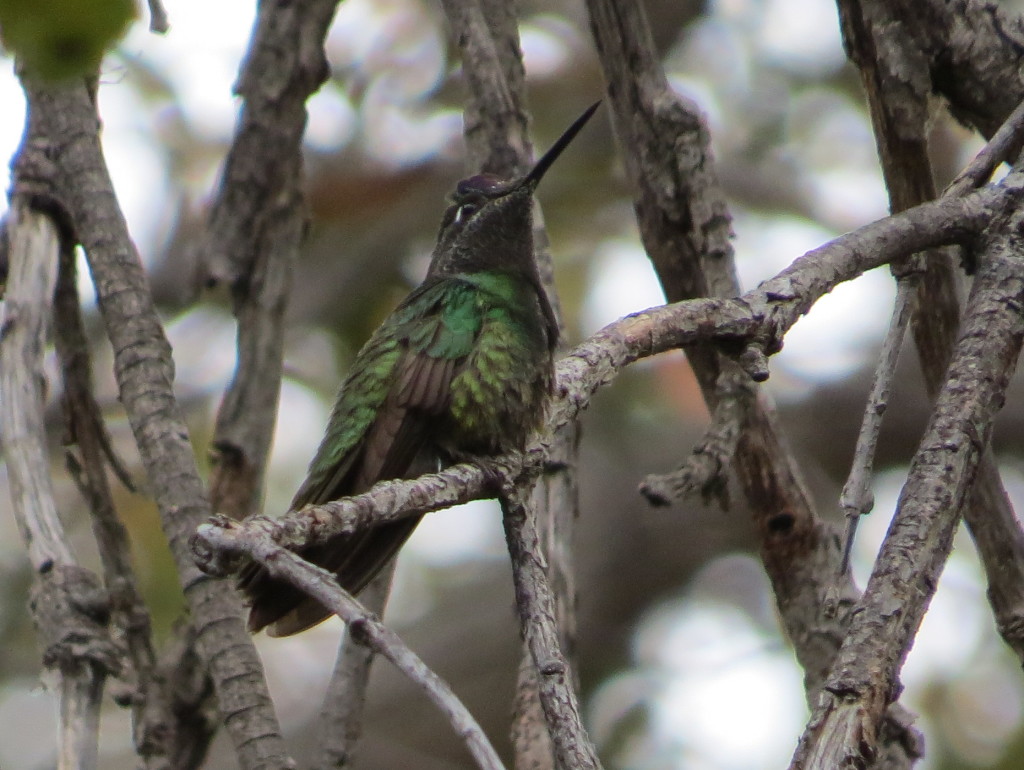 By this point my strength and time were completely gone.  My stomach was churning and my head was spinning with a massive 23 life birds accumulated in about 7 hours.  I didn’t even know my number then, though Tommy always knew what my tally was.  Tommy and Gordon delivered me to my hotel at precisely 3:00, so I could join my family for vacation within a vacation in Green Valley.

The Elegant Trogon search would have to begin in earnest the next morning.  I parted company with these two fine birders that afternoon under a certain level of anxiety and indecision.  Their stress of finding the Trogon the next day for me was palpable despite my assurances that I’d already had a fantastic trip,Trogon or not.  They were taking this way more serious than me.  I know the risks in birding.  Dipping is a big part of it, and I was mentally prepared for it (mostly because I know there will be more AZ trips in my future).

Indecision for the next day’s plan of attack was also clouding everything.  Tommy was torn between Patagonia Lake State Park and Madera Canyon.  A very easy Trogon had been seen all winter at Patagonia, but now in late March/early April, that bird would likely move to higher elevations any day.  Madera Canyon, on the other hand, was the proper elevation, but its birds had not been as easy to locate.  Decisions, decisions….  What would we do?  At the moment, I couldn’t focus on the tough calls.  I just wanted to stop being aware of my stomach 100% of the time.  What would happen? How would this all end? Only the next day would hold the answers.