Just as with beer, cheese, and processed meats, occasionally one must step foot in next-door Wisconsin for the finer things in life, and birds are no exception.  Last spring their state-record Garganey just over the border drove Minnesota and Wisconsin birders wild. This winter a slightly less cool bird-which by no means diminishes its status!-showed up in the twin-port city of Superior, Wisconsin.  This large bird, figuratively and literally speaking, that chose to take up winter residence on the Wisconsin side of the Blatnik Bridge also had Minnesota birders worked up into a frenzy.  Yes, we are talking about the Gyrfalcon, a falcon so superior in size and awesomeness to its lesser brethren that seasoned northern birders drop the “falcon” altogether when uttering its name.  Gyr (pronounced “jeer”-trust me, I heard it spoken by the state’s top birder) was first caught by raptor bander, Dave Evans, in Superior and word slowly got out that this arctic predator was in town. Better yet is that it had taken up residence at the Peavey grain elevators on Connors Point where it spends much time loafing and enjoying spectacular views of Lake Superior when not feeding on pigeons in the harbor. 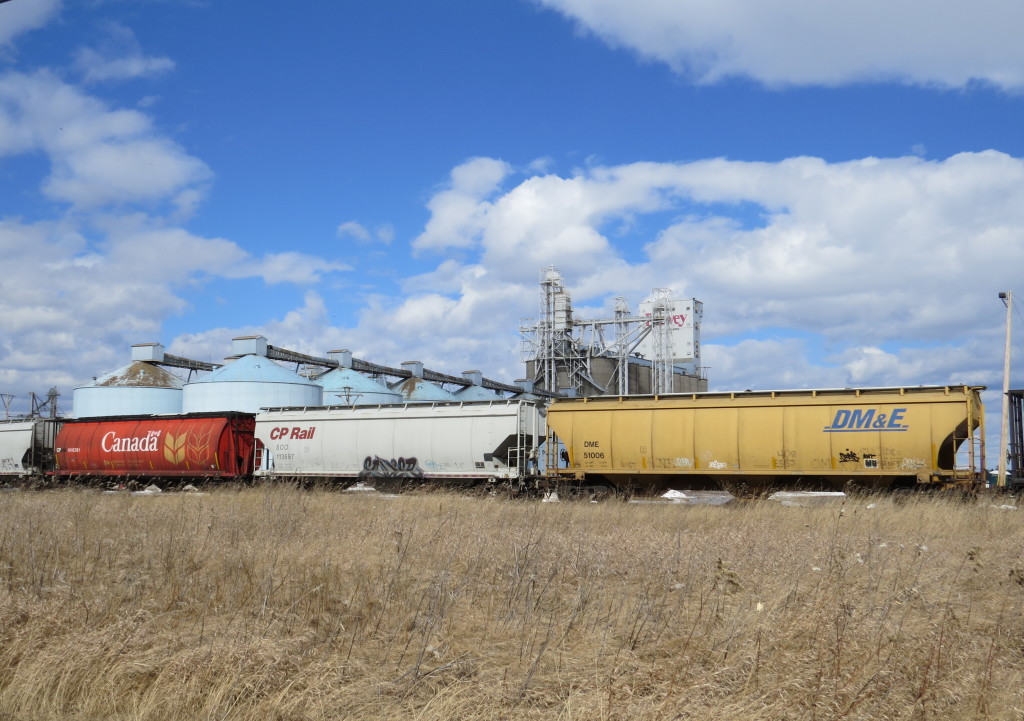 I, too, had Gyr fever.  I had many false-starts and set-backs for getting up north the past month, but I finally made it happen.  It took much planning, namely sending the kids home with Grandma and Grandpa after a double birthday celebration, sending Melissa home to a quiet house, and sending myself solo to Duluth/Superior and beyond.  It was win-win-win. Though with some atrocious dog diarhhea episodes at home while 3/4 of us were away, that conclusion may have to be settled far from now by the bird-blogging historians.

But, anyhow, I felt free as a bird as I drove north, much like this Rough-legged Hawk I saw along the way. 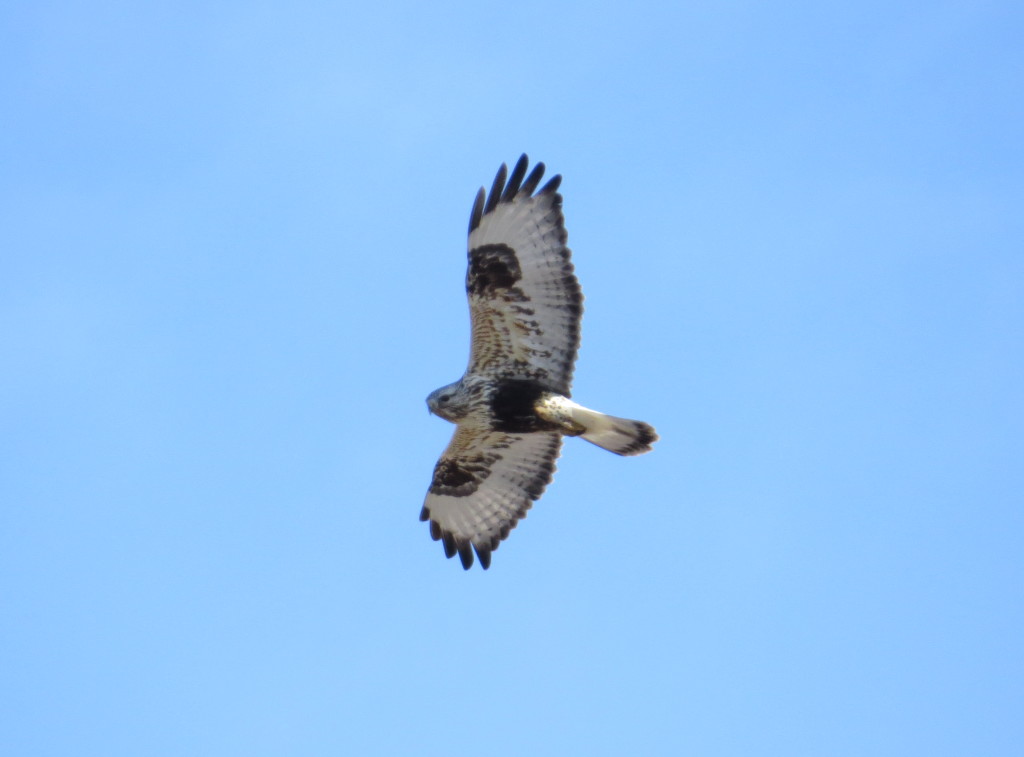 Duluth birder, JG Bennett, knew I was coming and graciously agreed to help me locate Gyr – not necessarily an easy task as many birders have dipped on seeing it.  In exchange I’ll be helping him find his Blue Grosbeak lifer this summer–I think I’m getting the better end of this deal.  JG called me when I was about an hour from Duluth to tell me that the Gyr was present.  Nice guy that he is, he babysat the thing for over an hour until I showed up. Considering the distance from the viewing area and the massive gridiron structure, I was glad he did. 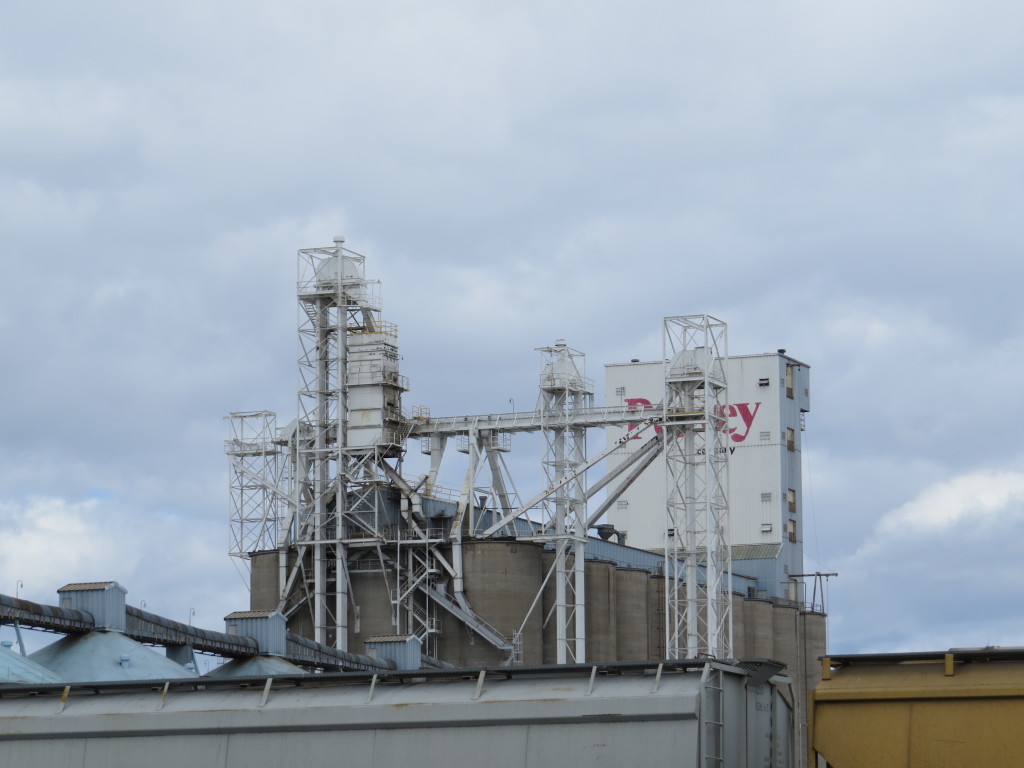 Even in this next photo you can get a sense of the size of the Gyr (look for the bump near the top right). 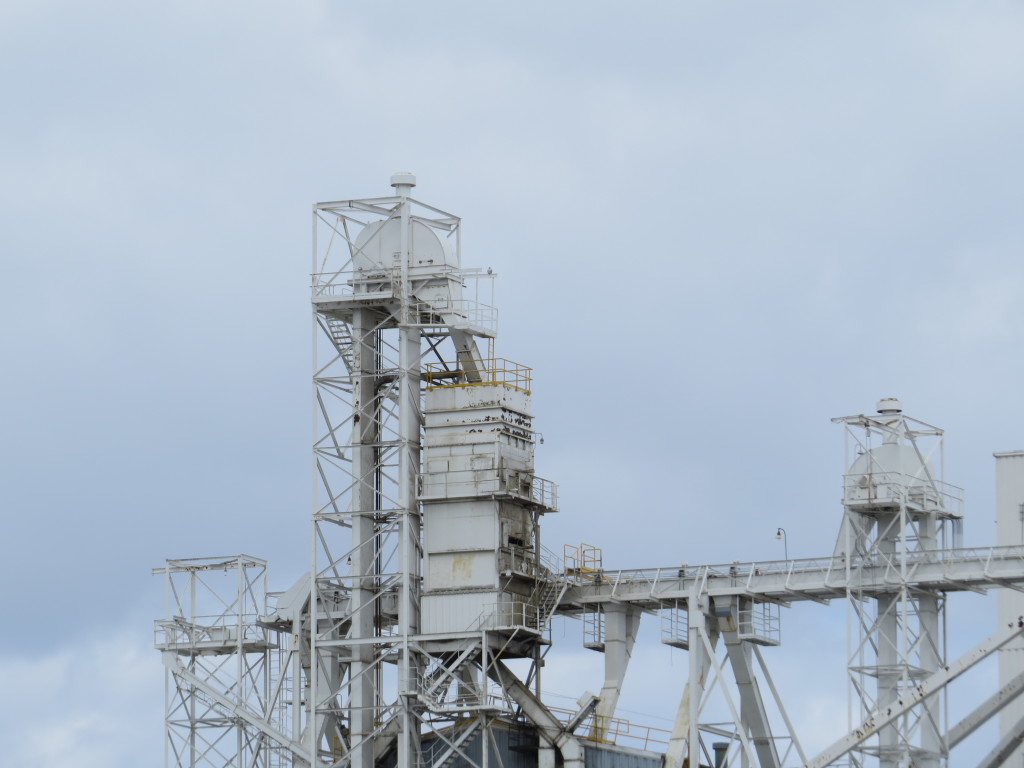 At times like this I’m thankful for the zoom capabilities of my camera.  Quality leaves a lot to be desired, but, hey, no one’s getting killer shots or even great views of this raptor. 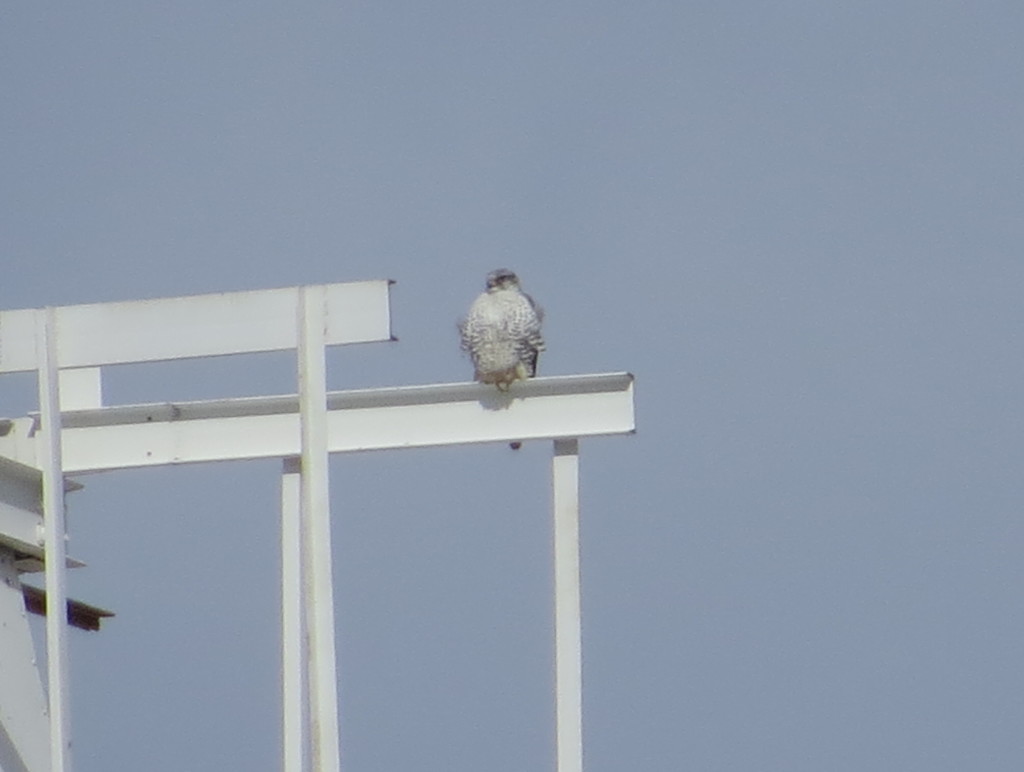 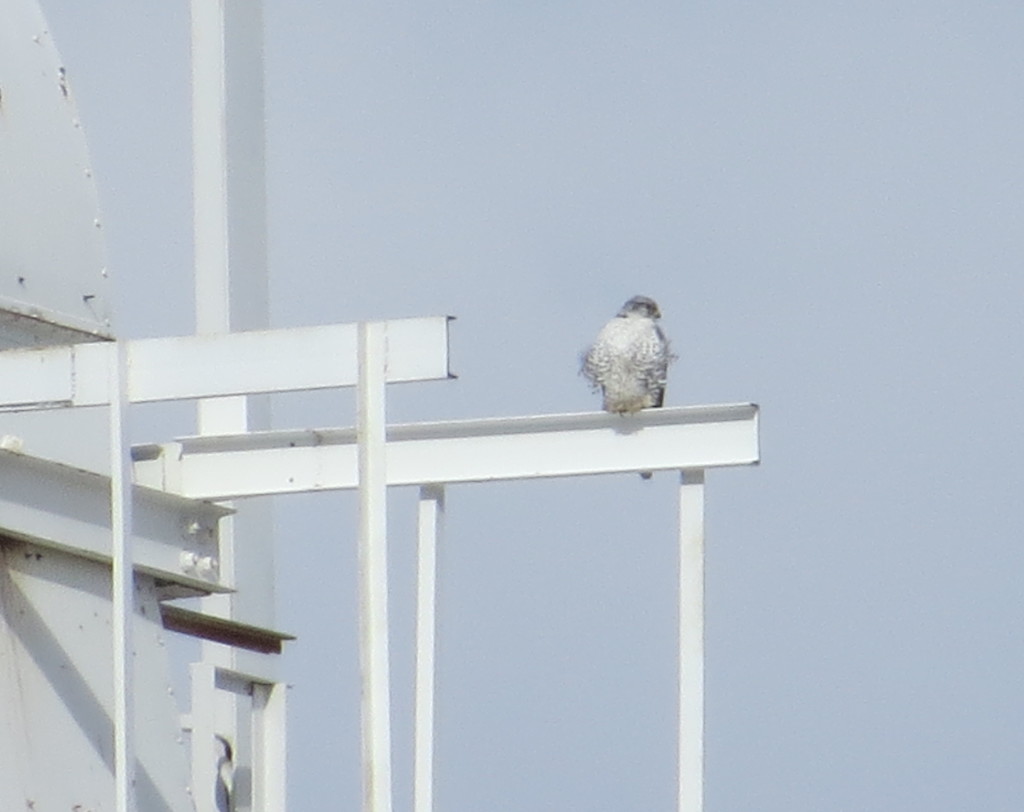 Some fun history on Gyr is that this same individual was caught and banded in 2003 in the Duluth/Superior area.  At the time it was a third-year bird.  It ended up returning every winter for four years and then did not return until this year!  Given when it was banded, the age of this male Gyrfalcon is estimated to be 14 years 8 months–the oldest Gyrfalcon on record!

I spent about a half hour or so with the bird who never, ever moved off his perch, even when pigeons flew right by his head.  By seeing the main target right away, my time was then free to fritter away as I pleased.  I had northern gulls to pick up (Glaucous, Iceland, Great Black-backed), but the Duluth shipping canal was froze over, so there went any hopes for gulls or sea ducks.  Instead I decided to try to track down one of three Northern Hawk Owls in the Duluth area as it had been over a year since I had seen this cool bird. The strong winds were keeping the owls hidden though.  I couldn’t find a single one.  Duluth birds in general were giving me the snub, including this Pine Grosbeak. 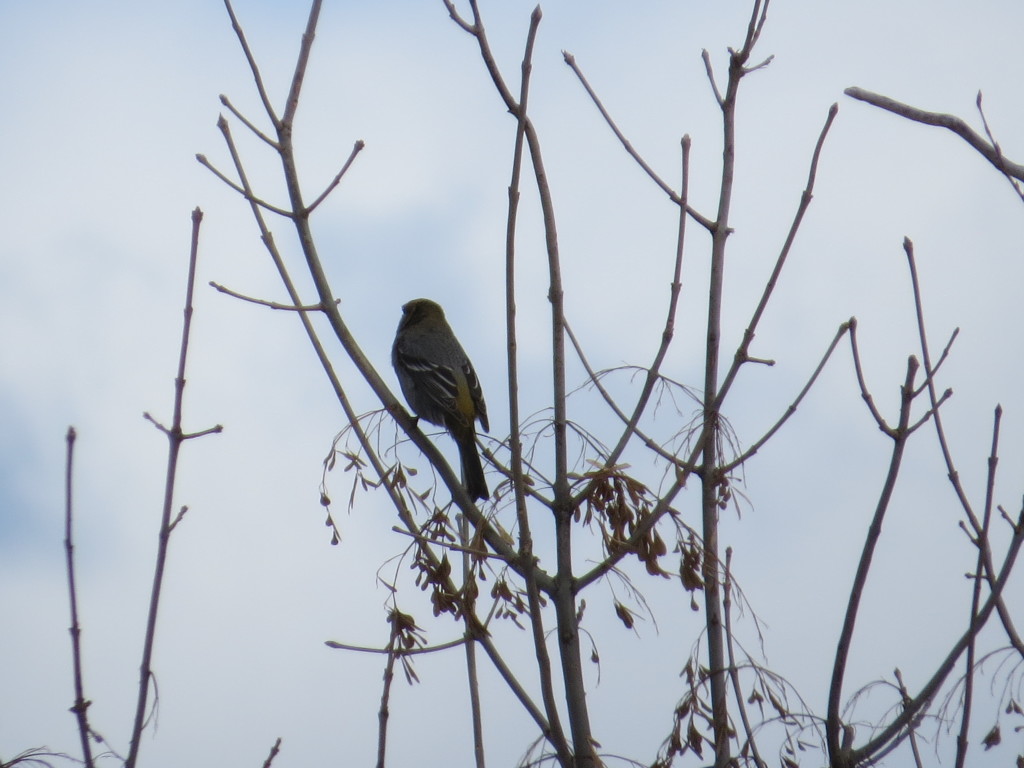 I had one last hope for the Hawk Owl (“Northern” is a bit superfluous and is often dropped by northern birders).  One had been hanging out just south of the Sax-Zim Bog near Canyon.  Specifically this bird could be reliably found right at mile marker 29 at Hellwig Creek.  I decided that the Duluth Hawk Owls were a lost cause, so I might as well try for Hellwig and then use up my remaining daylight hours in the Bog.  Hellwig was also a no-show, so it was on to the Bog for me.

I have several unfinished birding projects of sorts for the Sax-Zim Bog–a lifer or two, better photo ops of some, officially getting another on my state eBird list, and so on. Anyhow, one of my top goals was to get a good photo of a Boreal Chickadee, so I made a bee-line to the Admiral Road feeding station.  There were the usual suspects around. Gregarious Gray Jays are always up for a photo-shoot. 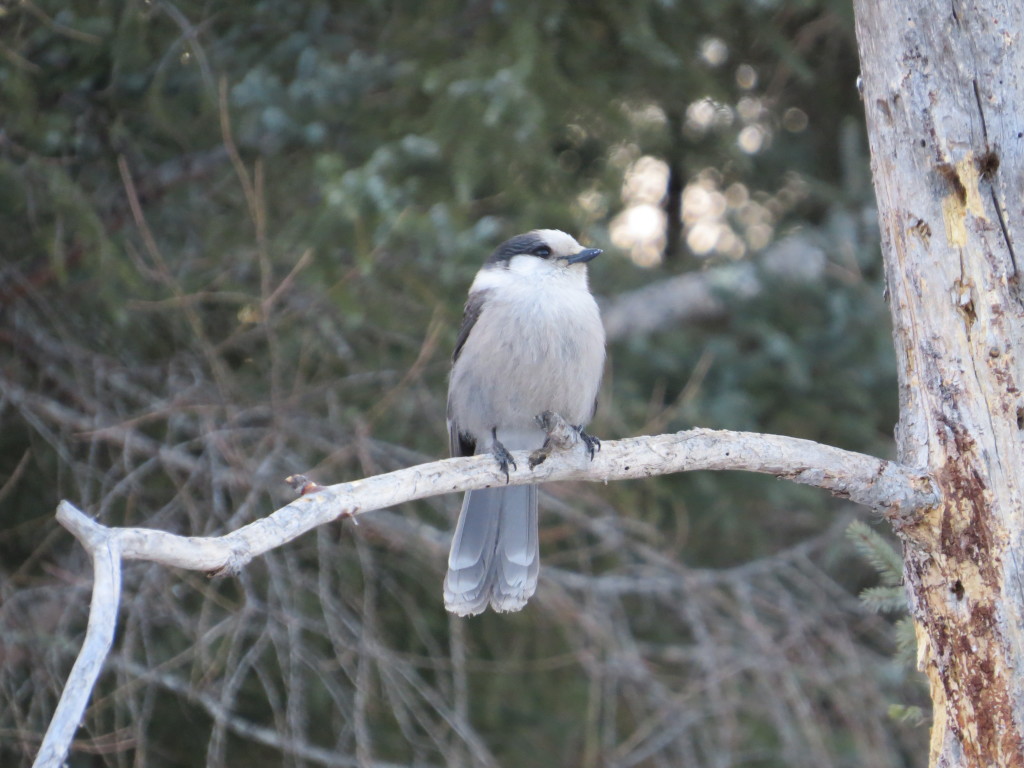 Common Redpolls were everywhere.  A couple looked whiter and plumper than the rest.  I’m thinking this one looks good for Hoary based on the small, conical bill and faint streaking on the flanks.  It had the overall frosty appearance of a Hoary. 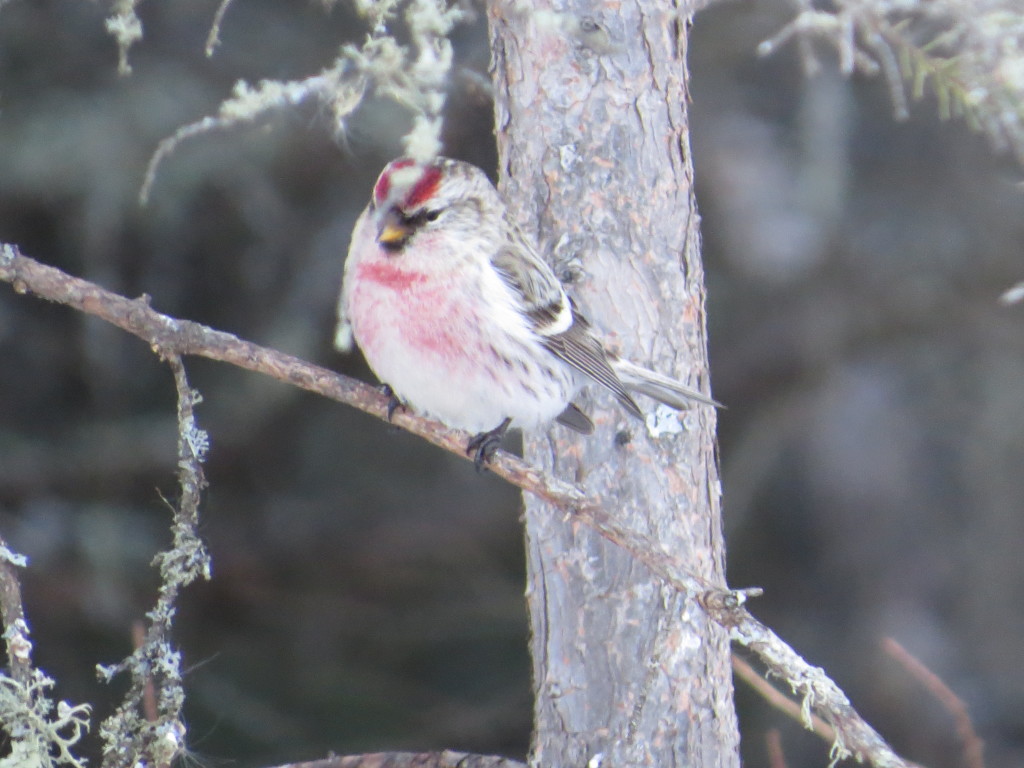 The Boreal Chickadees can be quite finicky.  Often birders will have to wait up to a half hour or more for just a flash appearance.  That was my experience last year.  This year was a different story as two of them were coming out from the Spruce bog constantly in the last hour of daylight to feed on their favorite winter food–peanut butter smeared on branches.  Visitors to Sax-Zim are encouraged to slather up some branches with the creamy stuff (and donate their fair share of PB) at the Admiral Road feeders when they visit.  It’s crazy, but it works. 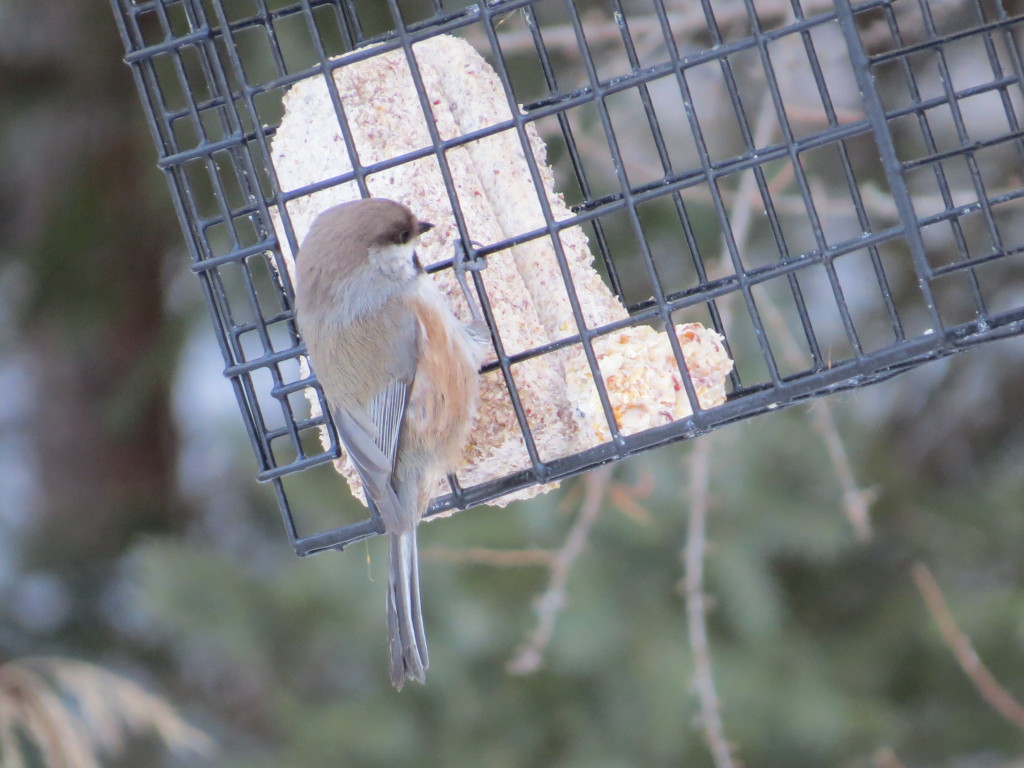 Admittedly I’m a bit smitten with this bird.  I’ve never really been able to answer the question of “What’s your favorite bird?”, but this one has to be right up there.  I may be a bit biased, but this, in my opinion, is the best Chickadee.  Perhaps that’s because it leads a secretive life in the deep, mysterious Spruce bogs alongside Great Gray Owls and Spruce Grouse and is rarely seen or perhaps because it is so visually stunning. 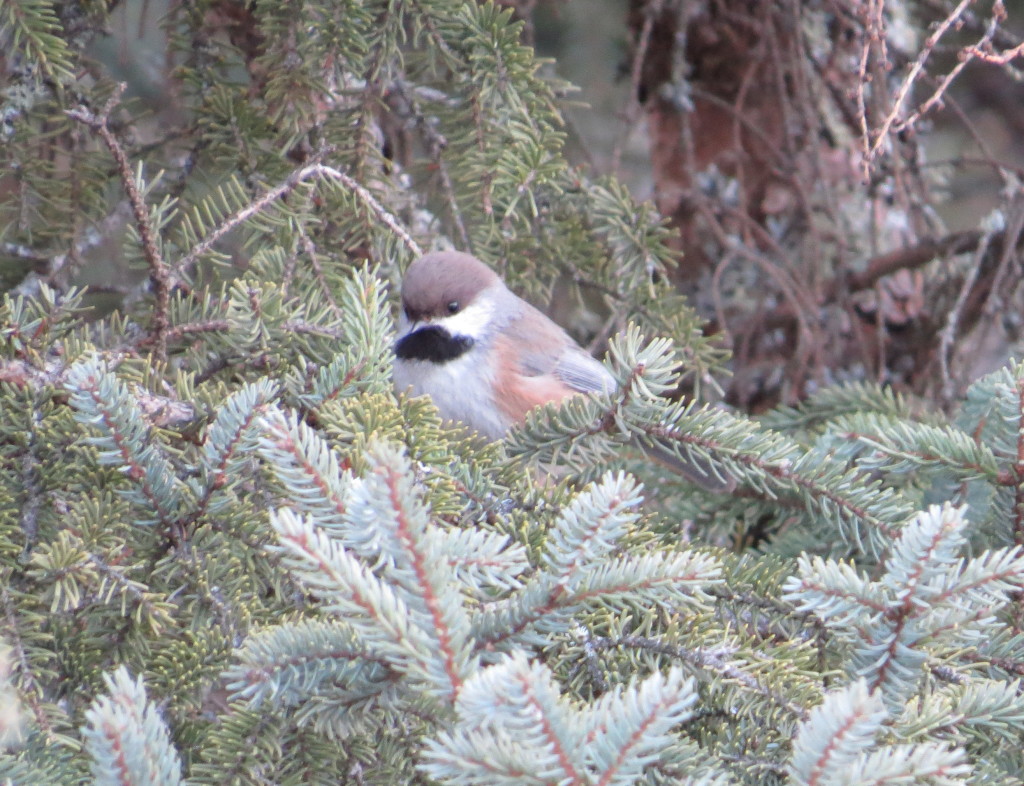 I’m finally at peace with the Boreal Chickadee as I got the photo I wanted–even if it does have a little peanut butter in it. 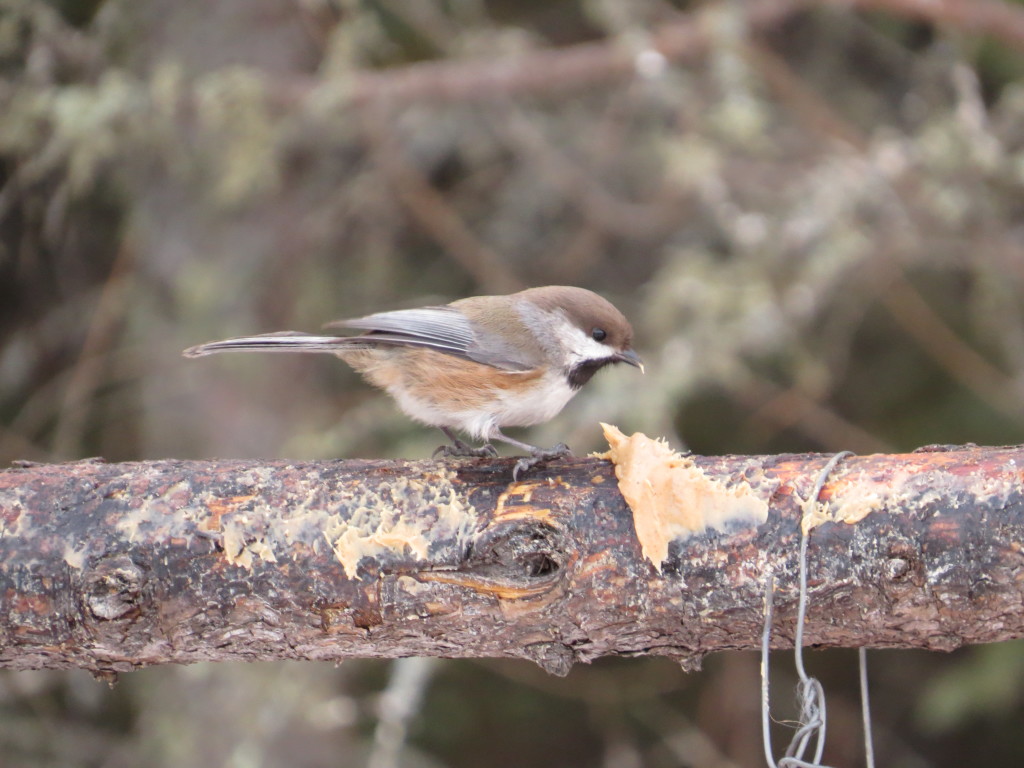 After hanging out with the Boreal Chickadees, who, by the way, are just as tame as their Black-capped cousins, I headed to Grandma and Grandpa’s to spend the night with the kids and prepare for the next day of birding which is arguably the best day I’ve ever had in the Sax-Zim Bog.  Stay tuned…there will be videos!