It’s not done.  Nope.  Home improvement enthusiasts will be let down while birding aficionados will rejoice that we have not let some silly bathroom remodel stop us from birding rather than the other way around.  But I’ll throw a bone to the former group by saying that we are getting there.  Like a jigsaw puzzle nearing its completion, the bathroom’s starting to fall now with rapid, visible changes taking place daily.  The truth is that I used to enjoy such work, but now it’s a chore — a horrible, dirty, dusty, cementy, go-to-the-eye-doctor-to-remove-a-foreign-object-embedded-in-the-cornea kind of chore. Each day that I go to my little 7x7x7 cube to endure such misery, I secretly hope that call or that email will come in alerting us to a birding emergency.  Last weekend as I was getting set to start working on mudding and taping the drywall, such a call came in.  It was Joel.  He had a Black-crowned Night Heron for us.  Thank you, thank you, thank you.  Time to roll.

Our list of life bird needs for our area is so short that all the guys here know it fairly well. All that remain are a handful of elusive and reclusive birds as well as a few shorebirds. The Black-crowned Night Heron is one such needed lifer.  And one such needed work break. 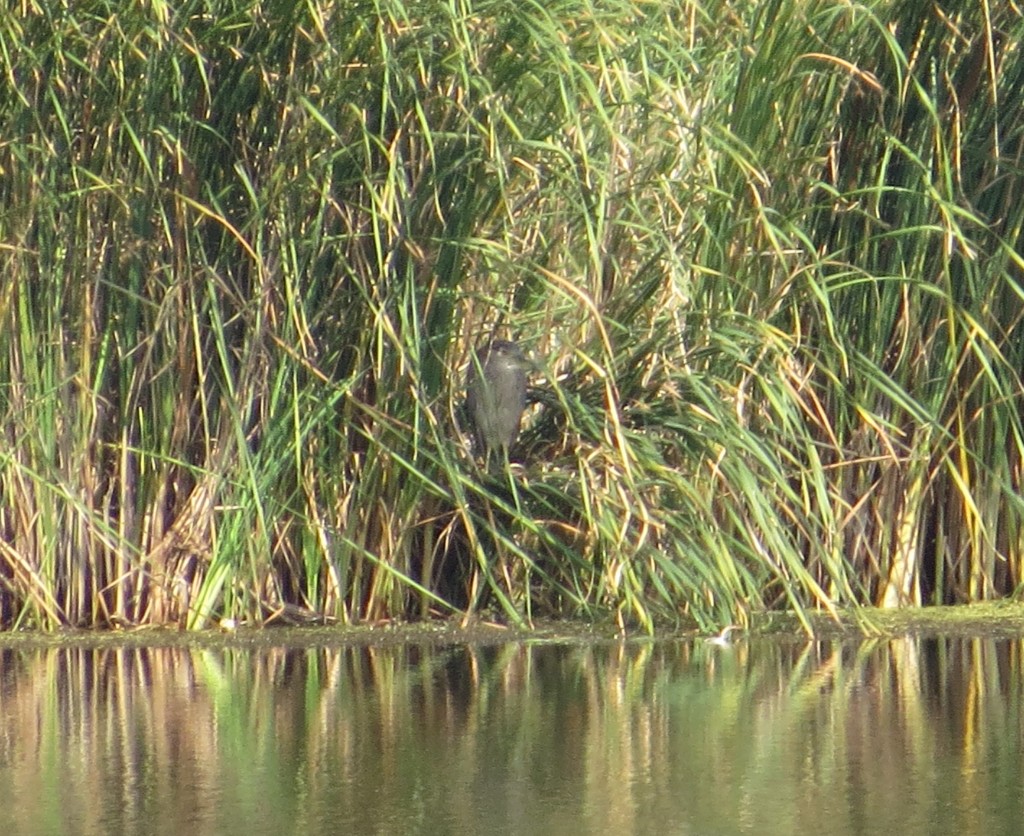 The photo is not much to look at, but we were fighting some serious distance. 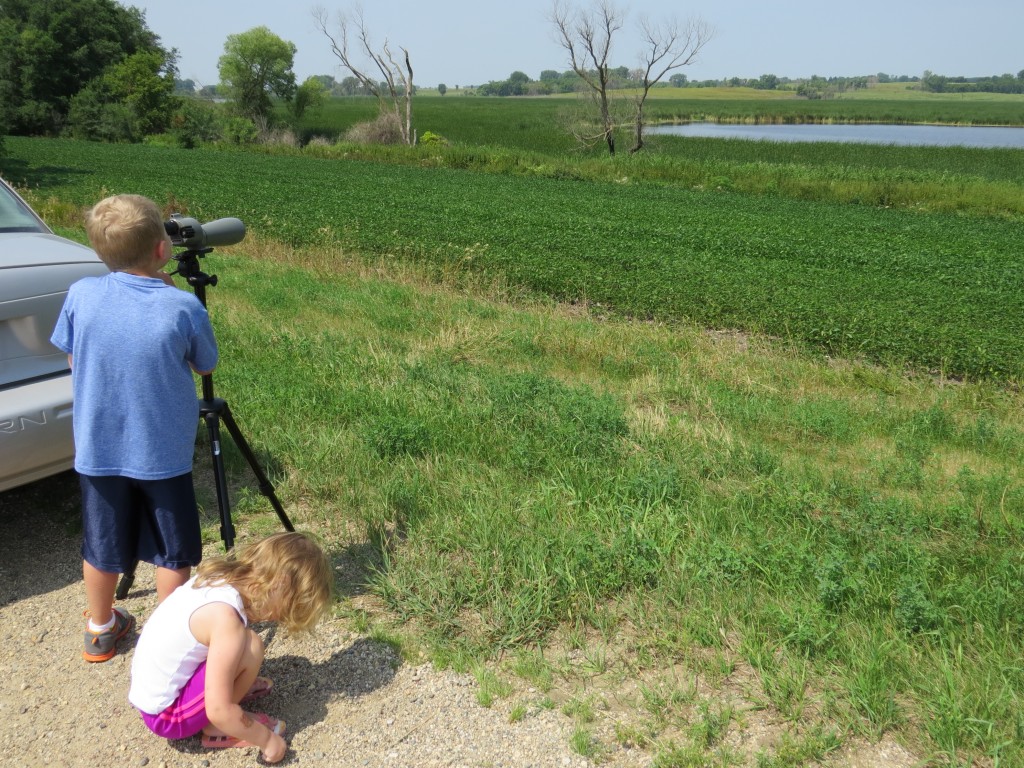 It’s a good thing Joel came out to point it out to us.  Even with the right location, I doubt I ever would have found the heron.  Evan felt the need to point this one out to his sister. It was pretty cute.

After this we went to Kandiyohi County’s main shorebird spot, Carlson’s Dairy just west of Pennock.  We were after another lifer Joel had for us, the Semipalmated Plover.  We couldn’t find one at Carlson’s though. Try as we might, we just could not turn this young Killdeer into our bird. 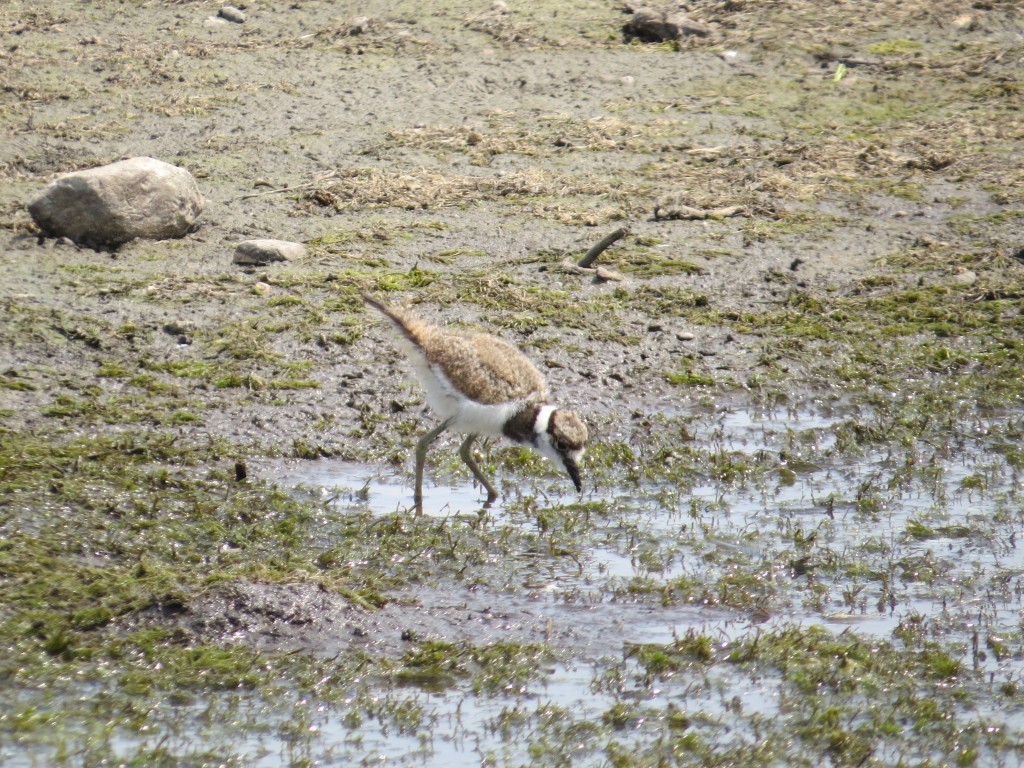 Besides the little life bird excursion, the Blue Grosbeak searches, and all the in-state and out-of-state trips, I’ve been procastinating the bathroom project by hunting locally for another would-be lifer, the Wood Thrush.  A couple weeks ago Evan and I went to a spot marked out by Joel north of Sibley State Park.  We were successful in hearing our bird, two of them actually. It was another story seeing this brush-loving understory dweller. I guess we can only count it as a heard-only lifer, an oxymoron in the language of birders.  It’s tough to be so close but so blind.  At least I knew the song well now – owned it in fact.  So much was the case that as I was sitting by Melissa on the couch that evening while she was playing Hay Day on her iPad, the background farm sounds reached out and grabbed me.  I hollered for her to turn up the volume as I put my ear to the speaker.  And there it was, clear as a bell. Mixed in with the farm animal noises was a singing Wood Thrush.  Awesome, but also very cruel to be taunted by this repetitive bird song.

Wood Thrushes must love farms because another birding friend, Brad, called me a week or so later saying he had a Wood Thrush at his farm place. Off we went instead of doing work on the bathroom.  This time, though, we neither heard nor saw the bird even though we were hot on its tail. Argh.

But this story of procrastination does have a good finish even if the bathroom does not yet have the same thing.  Randy was at Carlson’s the other day and said there were Semipalmated Plovers all over the place.  Sweet.  Evan declined to go with me — he’s been burned by this bird too many times at this spot which is nearly a half hour away.  He had a farm to build on Hay Day and Wood Thrushes to listen to.

So I went to Carlson’s solo and put the Semipalmated Plover to rest. 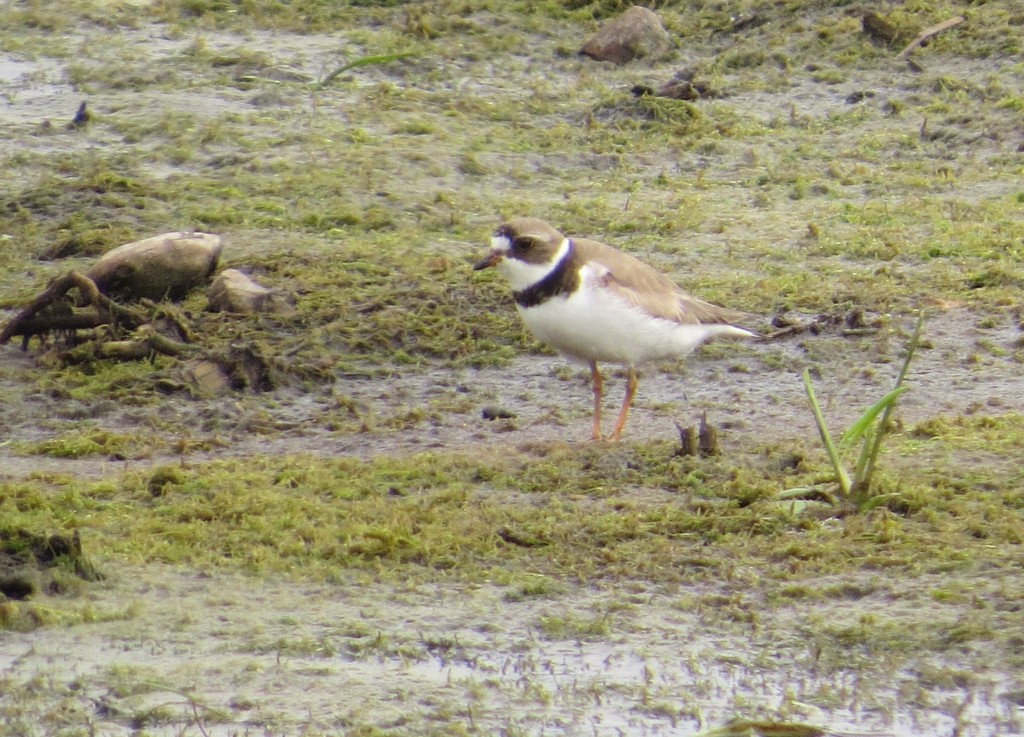 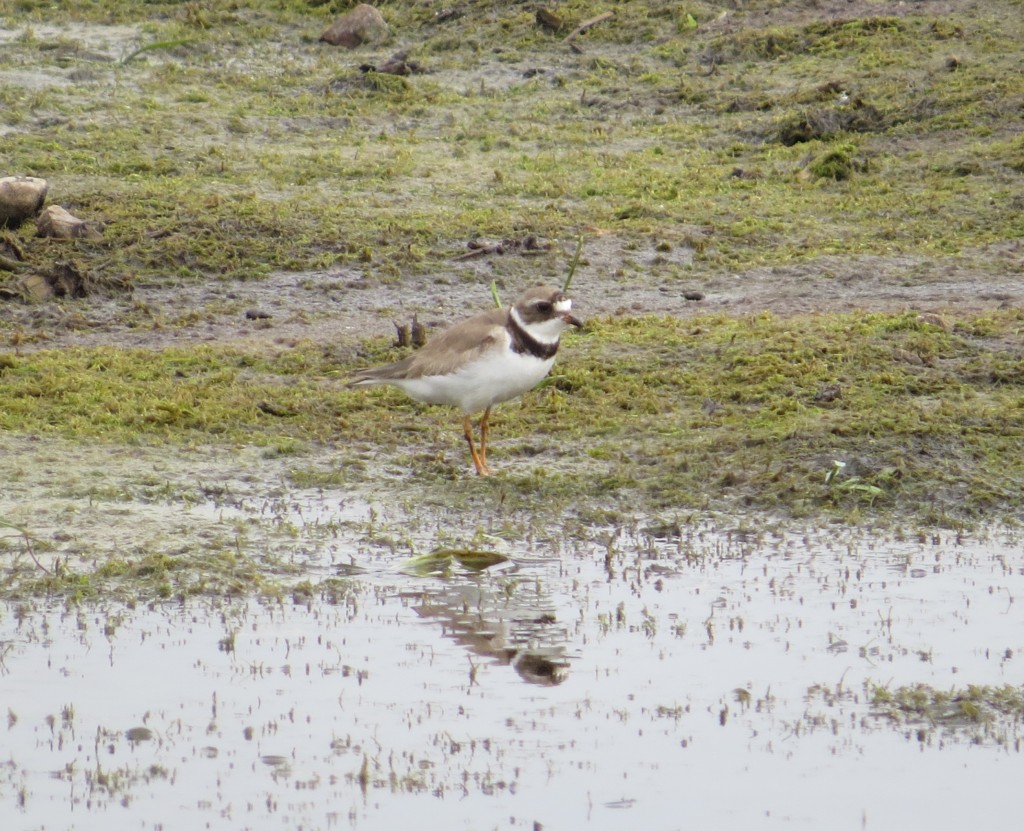 As a bonus I was able to use a recording to lure in one of several calling Soras, another heard-only lifer at this point. It was magical as I watched the ditch grass move like a snake where a Sora was sprinting his way toward me.  And then, he poked his head out in a small clearing allowing me to see his bright yellow beak.  He sized me up and then quickly disappeared once again into the grasses.  Two more life birds on the books. The wish-list for local stuff is really getting short now.

I suppose, though.  It’s time to get that bathroom knocked out.  But even if I find myself distracted by going out on the roads chasing a migrant, a vagrant, or a hermit, I’m still doing bathroom research.  The ingenuity of this farmer proves I have so much more to learn. 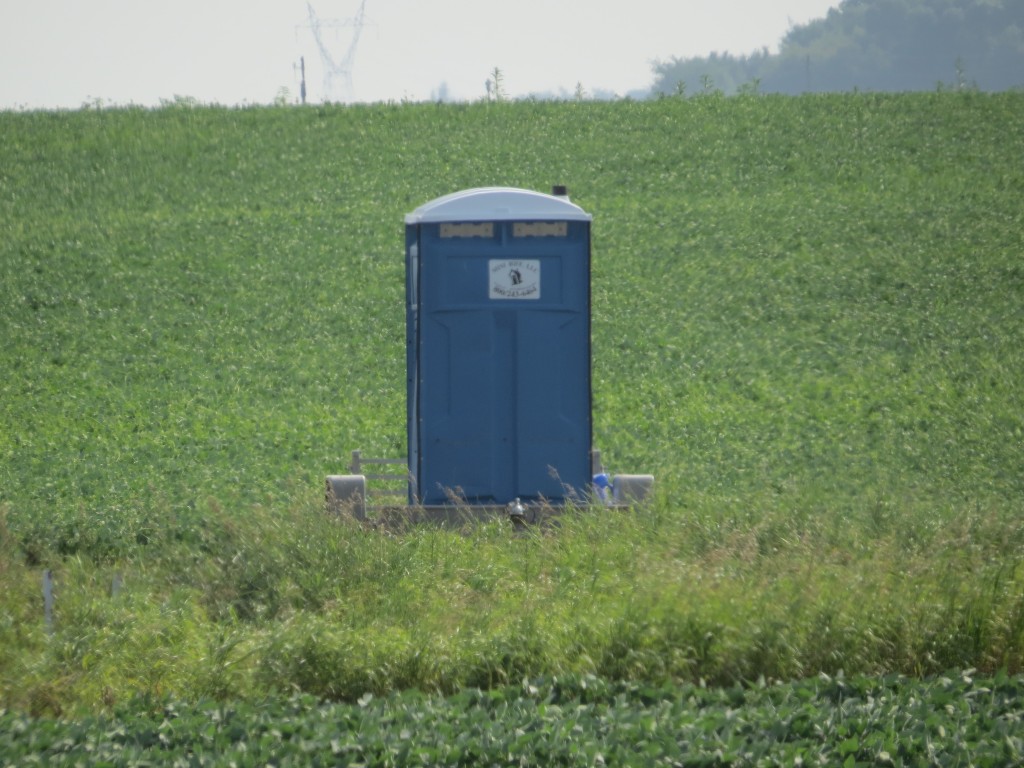 6 thoughts on “This Crew Breaks for Lifers”