As I packed the car that last morning in Colorado, the Western Tanager was weighing heavily on my mind.  Yes, I had seen it earlier in the week, but the quick looks and obscured photos were unsatisfactory. Additionally Evan wanted it too.  There would be time for one last play. But I doubted that play and felt that Custer County was going to defeat us as it had us surrounded with Western Tanager-less mountains (or so it seemed).  Custer was the last option to see WETA as we’d be heading east out of Colorado into lower elevations and windswept grasslands.

I had been debating two options for that play – back to Forest Service Road 383 by Bishop’s Castle where six WETA had been reported or back to Greenwood Road where two had been reported.  I got skunked on 383 earlier, and it just didn’t give me a good vibe overall.  I finally settled on Greenwood Road; it wasn’t as much of a detour, and I had previous success there. Statistically speaking it was the worse bet, but sometimes a birder has to follow his gut.

With that decision made, we said our goodbyes and began descending the mountain to the Wet Mountain Valley below.  As I drove away, fear of not seeing the bird mixed with doubt about my decision.  All this was churning inside when I spotted a larger bird at the top of a Ponderosa while that mountain home was still visible and looming large up on the mountain behind us.  I had quickly become acclimated to the new species at Jon and Carol’s house and this one didn’t fit any of the profiles. Even as I reached for my binoculars on the floor of my car I had a strong suspicion of what I was about to see and could hardly get those bins up fast enough.  And my suspicion was right for I was looking at a Clark’s Nutcracker! Oh yeah! 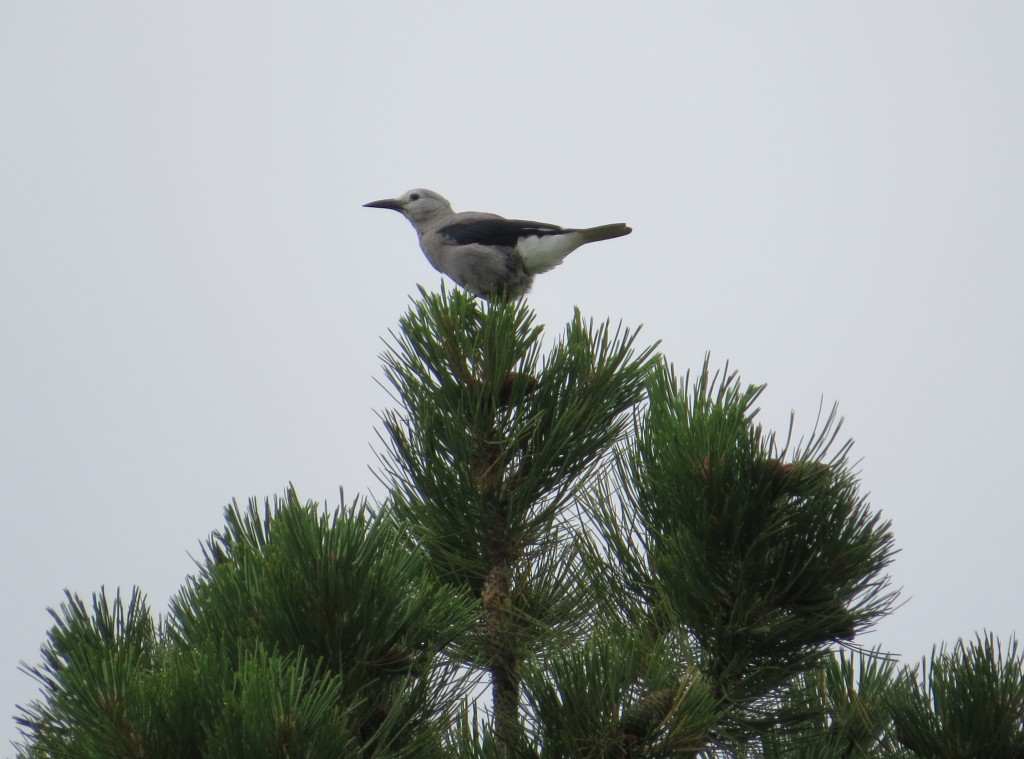 Evan looked up to get his check mark while I hopped out to follow this bird around a bit and get some photos.  I had hoped I would get this bird in Colorado, but I had read it’s a high elevation bird near the timberline.  Needless to say I was quite surprised and delighted to find one at 8,300 feet.  The whole time I observed it, it made this rasping, croaking sound.  I had heard that sound the past couple days but didn’t know what was making it. 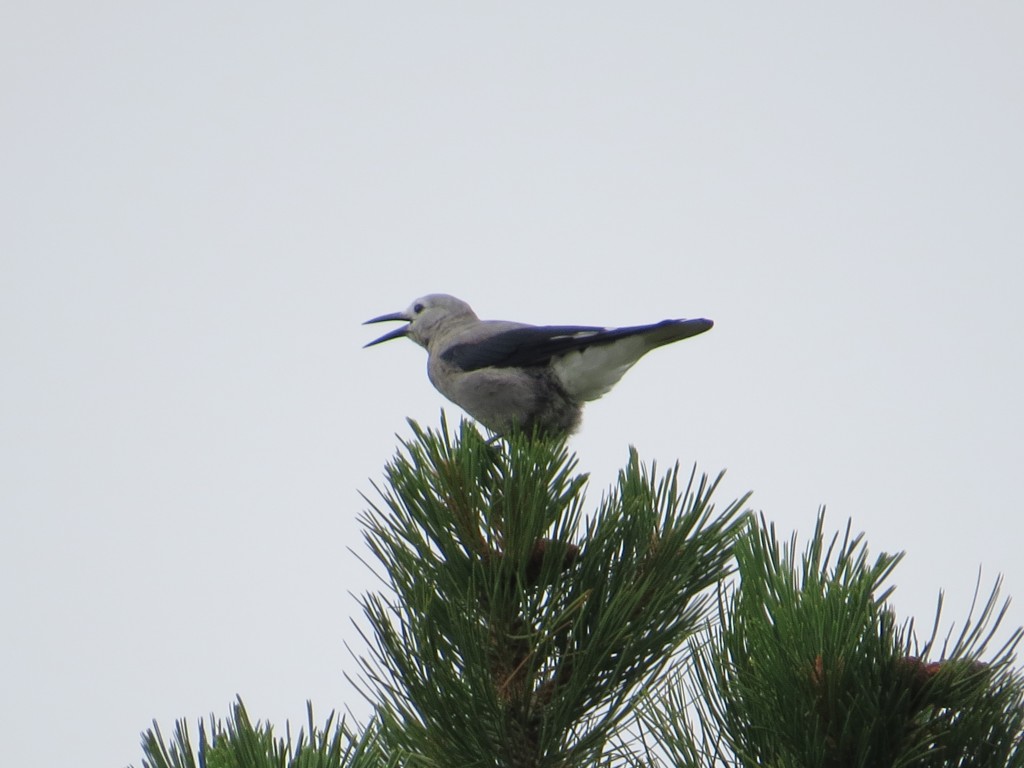 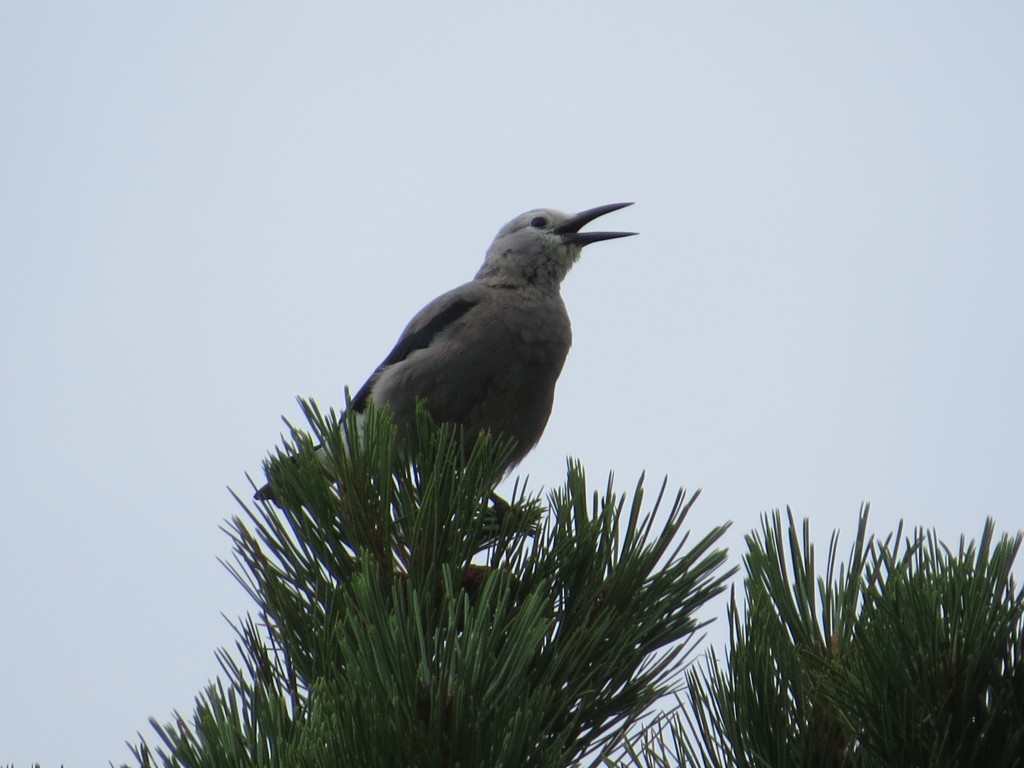 This was quite the thrill seeing this cool bird.  Every new western species I find is a double bonus – it is one more for the life list and one less vagrant to chase in Minnesota.  I missed out on a Clark’s in Minnesota just before I really got serious about birding.

Now the prospect of potentially losing out on Western Tanager was easier to stomach. We eventually left the Clark’s to do his croaking and eating in peace, and we later arrived at the Greenwood Road for the moment of truth.  This road is a few miles long with very few inhabitants.  It was a nice, quiet, birdy-kind-of-road.  Not wanting to make this trip agonizingly long for the family, I was traveling around 25 mph – slow enough to bird but not too slow to keep us from making decent progress on our way home. Melissa then told me I’d never see anything going that fast.  (Isn’t she great?) Ok, then, so I dropped it down to 5 mph.  Melissa asked me what we were looking for so she could help.  Some of you may remember that she found all five of those Aitkin County Great Gray Owls and that bevy of Burrowing Owls in Arizona.  Anyhow, I explained the red, yellow, and black pattern to her of the tanager.  I no sooner said it and she pointed and said there was a bright yellow and black bird in the pine just ahead of us.  No binoculars were needed to see we already found the Western Tanager!  Of course, Evan couldn’t see it and the pressure or exhaustion was getting to him and the tears started coming.  I hopped out to grab a photo while Melissa was able to get him on the bird.  But that sneaky WETA was using his best goldfinch disguise.  I only got this shot before it flew across the road and down to the ground. 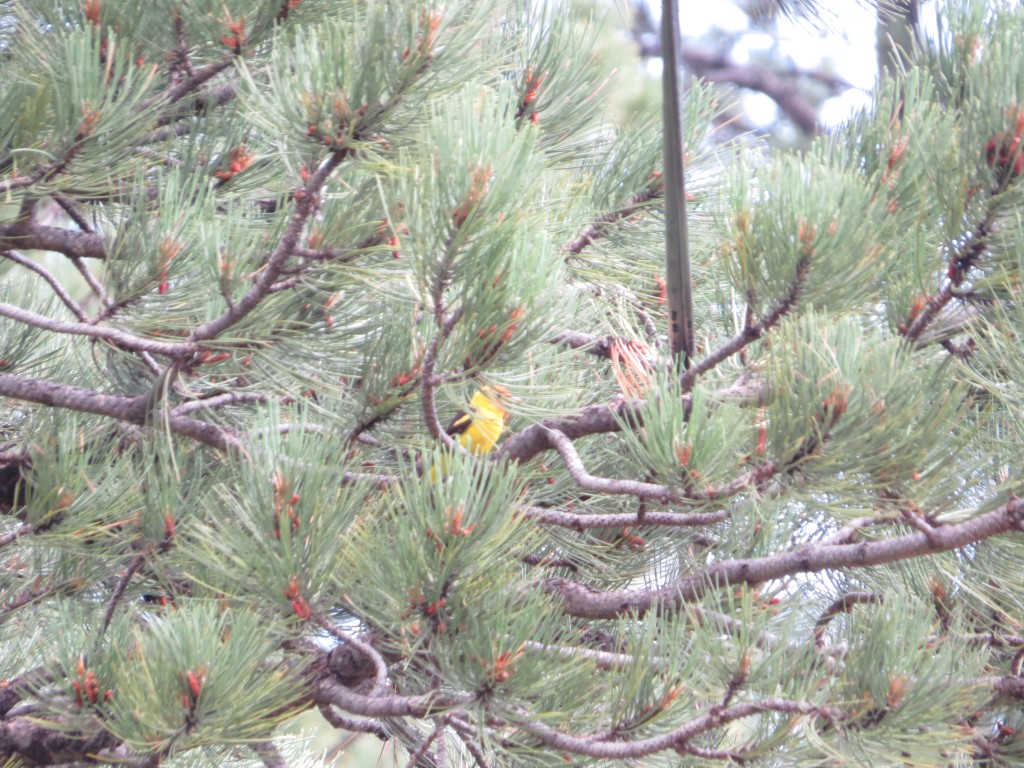 I watched and watched the spot where it flew to the ground.  What in the world? They’re supposed to be birds who prefer the tops of conifers.  Eventually I figured it out as the now soggy Western Tanager flew up to a bush after bathing in the quiet mountain stream that was running alongside the road. 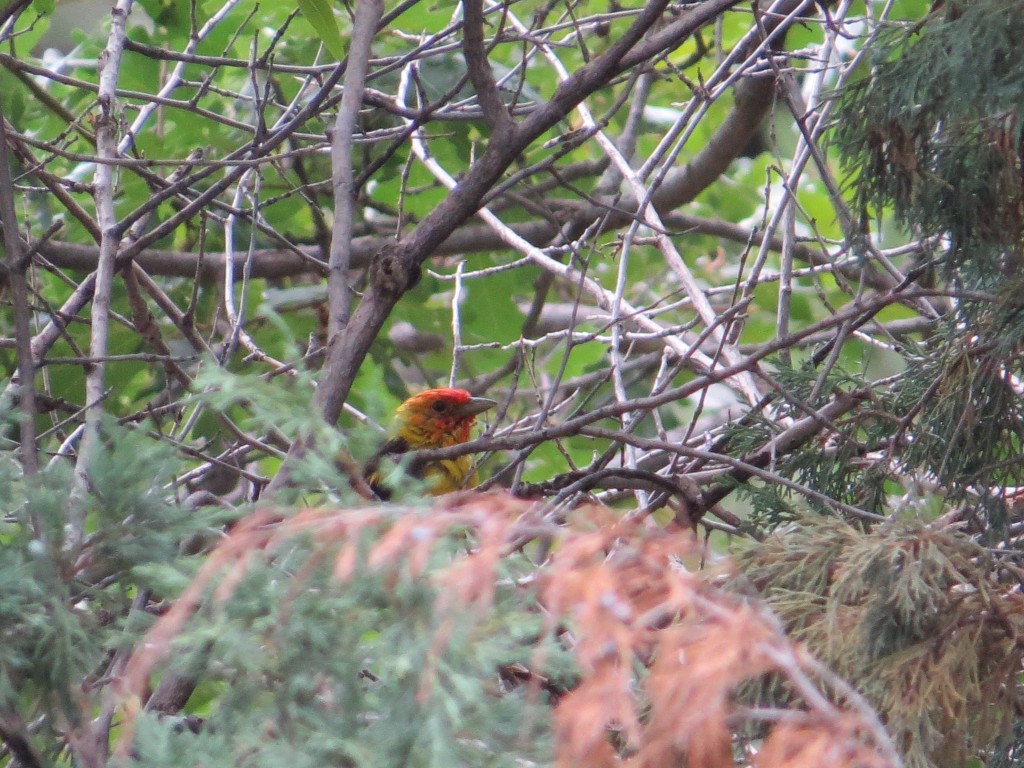 The bird continued to sit in one spot, preening itself.  Even though it was still, the distance was too great and the bird too wet for any remarkable photo. 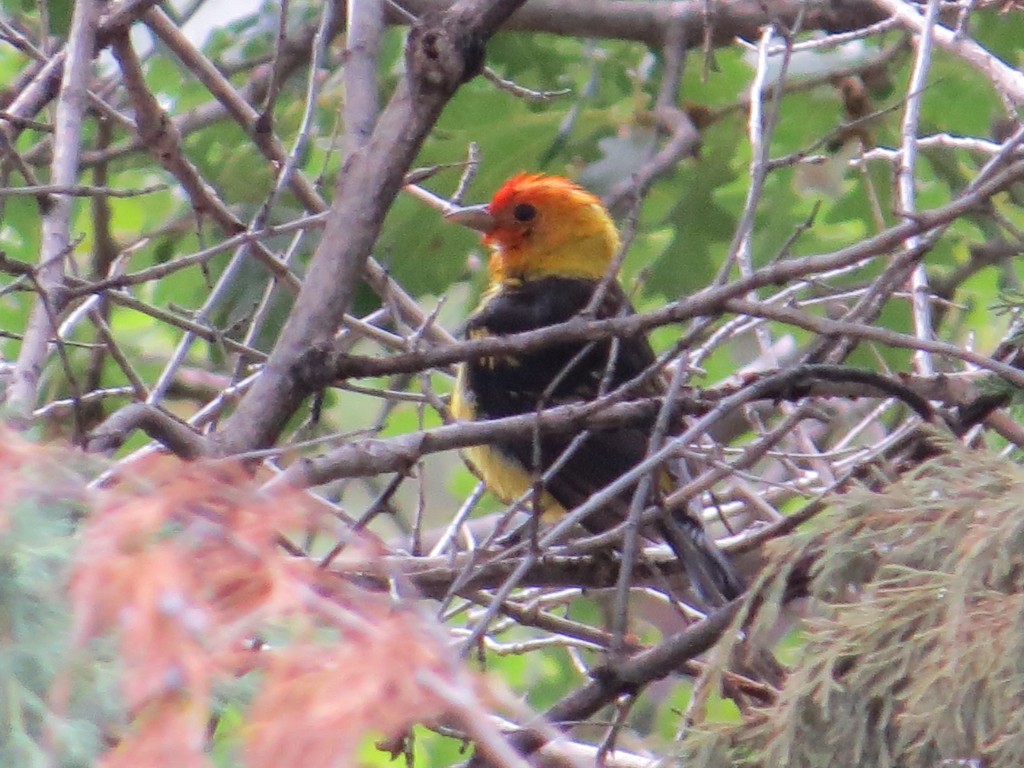 Eventually it flew, and I couldn’t relocate it.  It was nice to get this one for Evan.  I was also able to improve my photo of the bird just a little, so I was content.  Even still, we kept birding.  There could be more Western Tanagers around.  We saw some empids, and based on eBird reports they were probably new birds for us.  I didn’t care though.  I will fight the empid identification battle in retirement when I have more time.  Time was precious right now, and I wanted to see more Western Tanagers with our last remaining minutes in the mountains. 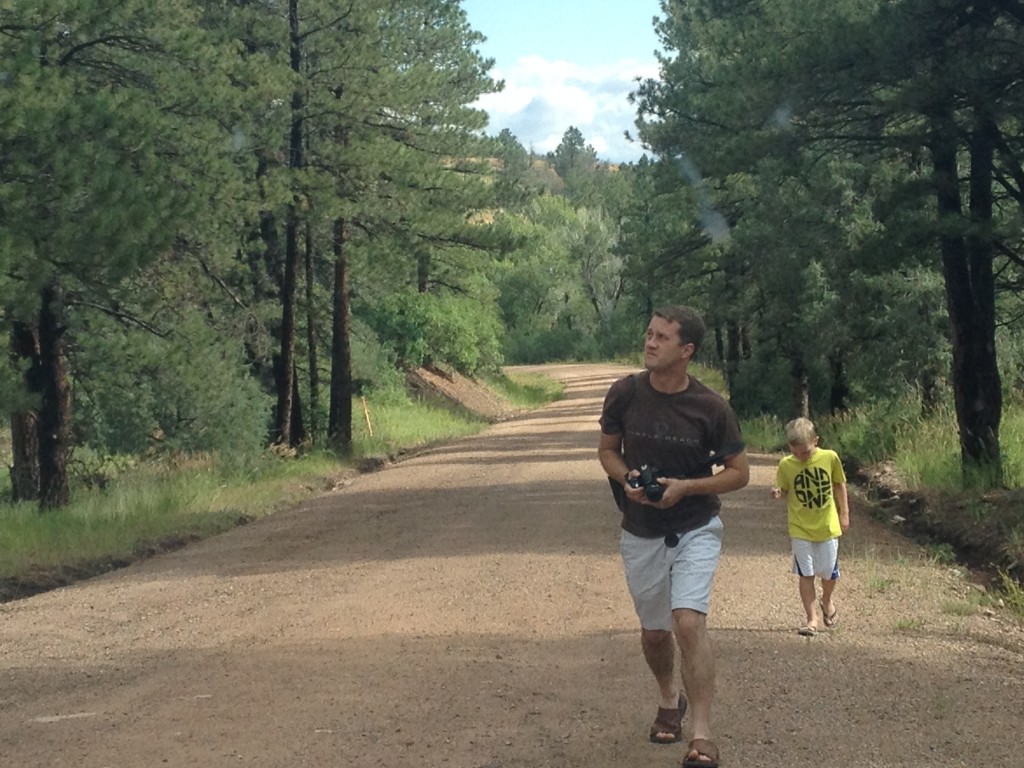 Evan and I searching for Western Tanagers along Greenwood Road, Custer County, Colorado

Reaching the end of the short Greenwood Road, we turned around to drive down it and back one more time.  Good thing we did because I saw another(?) Western Tanager fly across the road.  I got one photo before it was gone for good. Not a crush, but it was enough to defeat Custer. 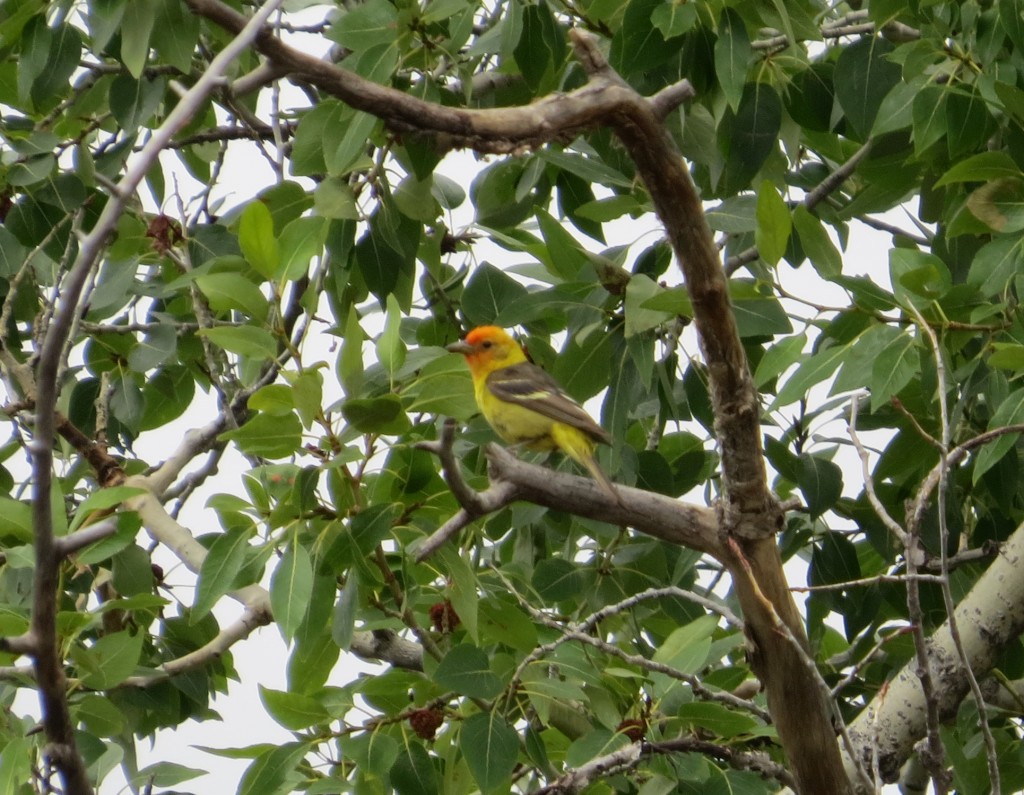 Though I was still ignoring empids and the like, there was a bird I couldn’t ignore because its size, its numbers, and its awesomeness wouldn’t allow it. From a streamside Willow Tree, a half dozen big birds flushed high into the pines above.  From the same eBird report I had read earlier, I knew these were Band-tailed Pigeons!  And they kept pouring out of that tree.  We must have seen 20. 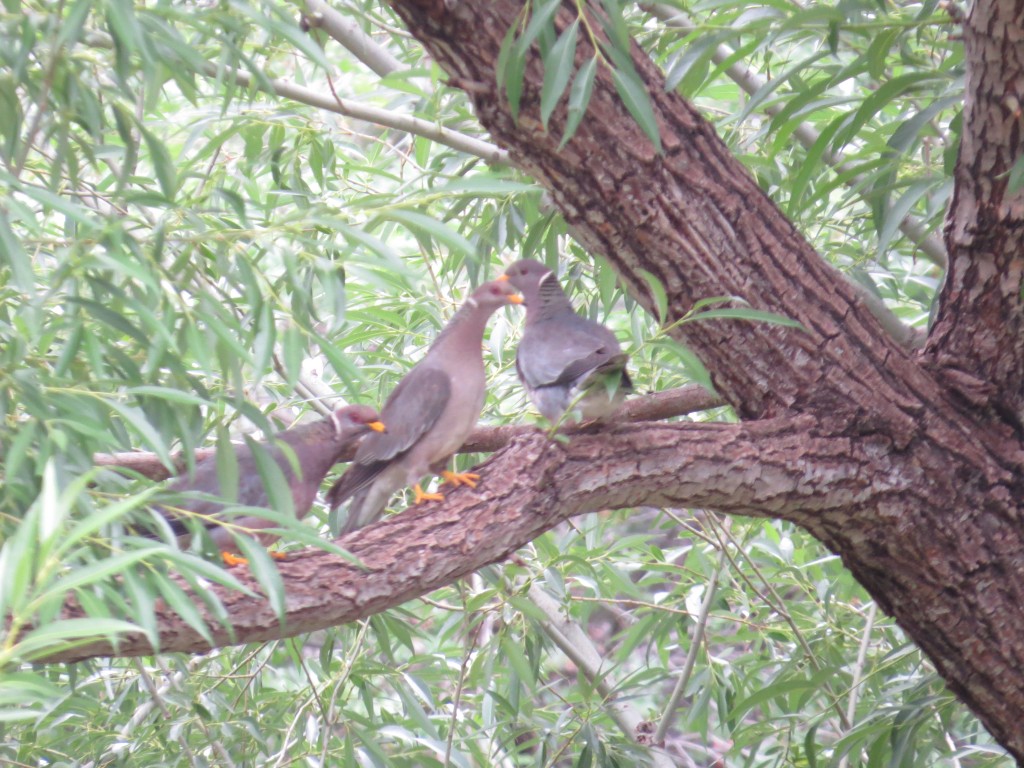 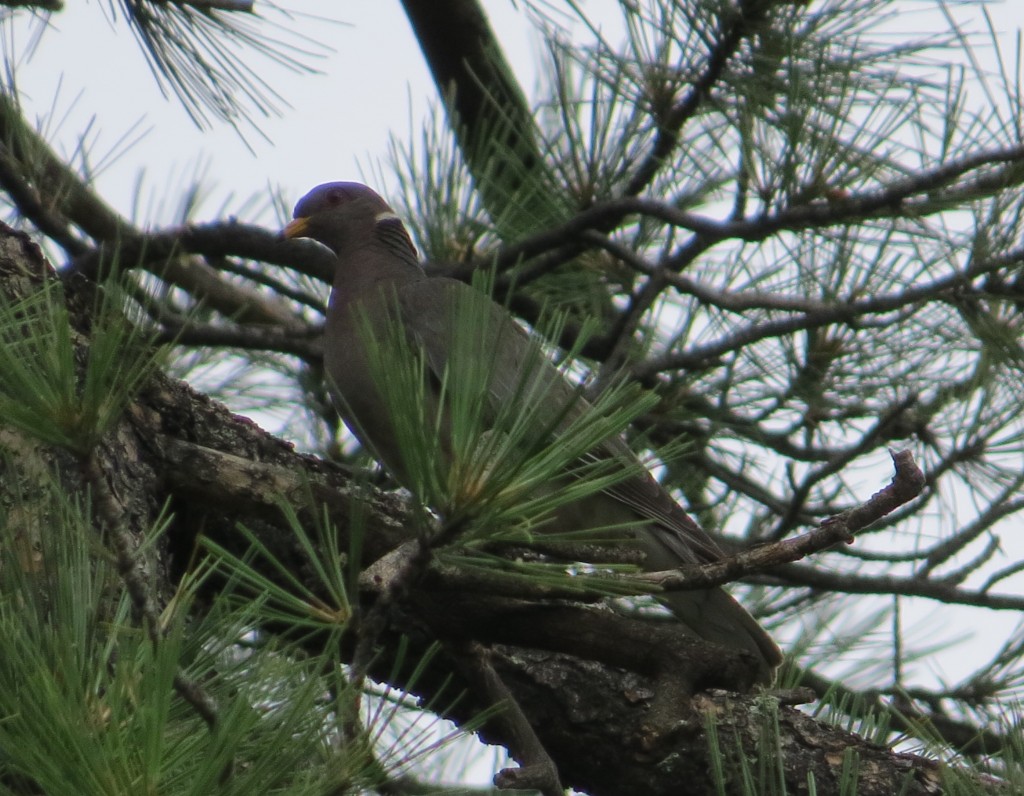 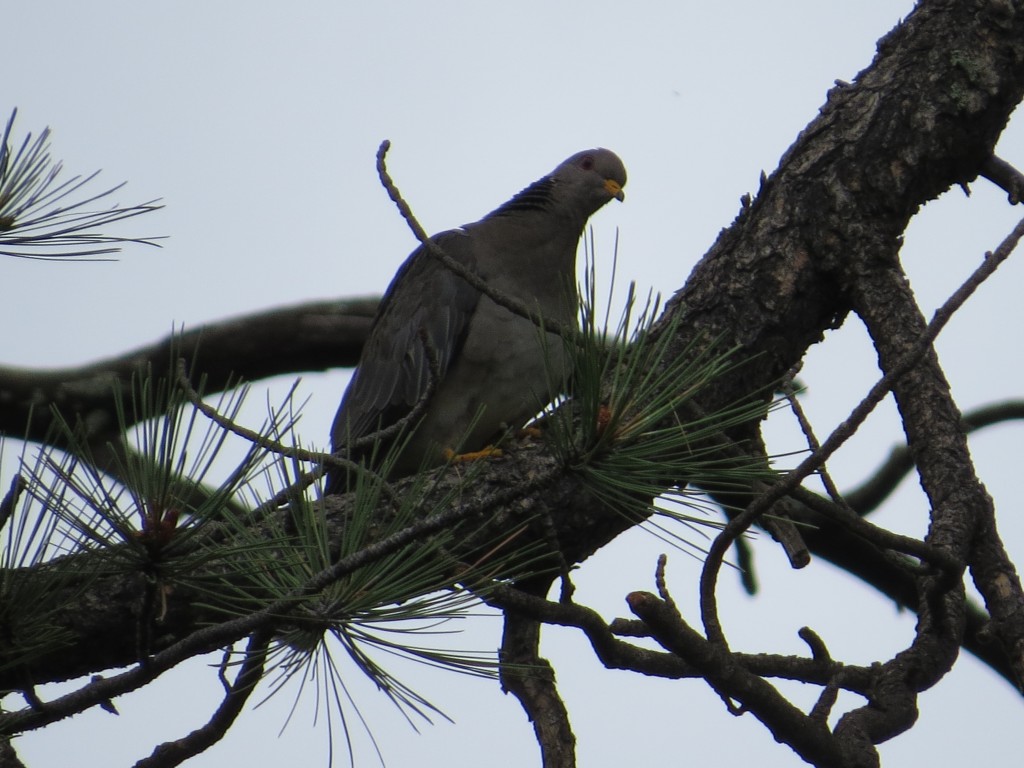 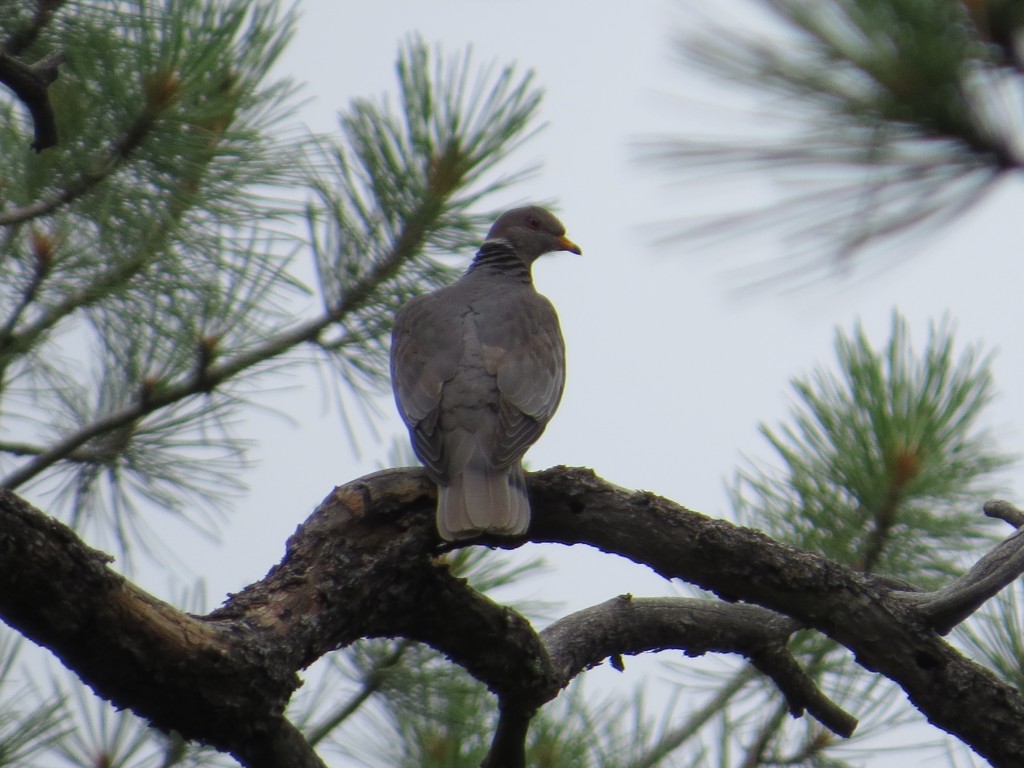 Two big bonus lifers (three for Evan) and the number one target nailed – I think we beat you, Custer.  In the last post I had said this would be the final Colorado post, but leaving the mountains is a natural break in the story and a good place to stop.  The story of the rest of the journey home will be a short and sweet post and will truly be the last one. Colorado had one more big gift for Evan, and Nebraska surprised us.