From reading the blog it may seem that I bird all the time.  The truth is that I squeeze in little bursts of birding around the regular stuff of life.  One of those regular things has been some home improvement, specifically a bathroom remodel.  Daily birding forays have been replaced with daily trips to Menards and Home Depot.  And instead of roaming the countryside freely looking for birds, I have been confined to a 7-foot basement bathroom with no window.  But I had been diligently putting in my time because I was looking forward to a full-fledged birding adventure with Steve last Saturday to Felton Prairie to look for Chestnut-collared Longspurs and other prairie goodies.  Even with that to look forward to, though, I was growing weary of the bathroom project.  If only there was a reprieve.

It turns out there was.  On Friday morning a very interesting email came in: the previous evening a Wood Stork had been found by a farmer in southern Minnesota very near the Iowa border when he was surveying damage to his grove from one of the recent storms that had pummeled the area.  Likely this bird had been blown in by one of the big storms.  I wasn’t even sure what a Wood Stork was, so I researched it and discovered this bird only lives in Florida and the Gulf Coast and that this was only the second time it had been in Minnesota!  There was a catch, though.  The person reporting stated that they had not yet secured permission from the homeowner for birders to come see it.  All he could say was that it was along the I-90 corridor west of Blue Earth.  Not only that but there was no fresh information of the bird being seen that morning. I would need more info than that to make the 3-hour one-way trip.  Nevertheless I had told Evan and Melissa about it, planting the seed that we may need to take off later.

Almost immediately after the email came in I got a call from Randy.  He wanted to chase it on the limited information hoping more details would trickle while in en route.  I’m surprised he called me first.  Maybe he figured I’d go because I was also a teacher and had the time off, or maybe he figured I’d be an easy sell based on my chase history.  Anyway, I turned him down saying I needed more to go on.  It was back to working on the bathroom for me.  Yuck.

Early afternoon came with a new email: the bird was refound and the exact location was given!  When I told Melissa, she surprised me by saying, “Well, I’m up for an adventure.  Do you want to go?”  Do I?!  I called up Randy and made arrangements for him to join the family on this wild bird chase.  Since Randy works with Melissa and gets along great with the kids, I knew he wouldn’t mind tagging along with the whole fam.

We had a pleasant drive down visiting and surveying all the flooding due to the incessant rains we’ve had.  As someone on Facebook stated, our new state motto will likely be “The Land of One Lake.”  Once we got to our location, though, we nearly panicked because we didn’t see a big, white stork, but even more worrisome was that we didn’t see any birders anywhere.  This was a second state record; there should be birders everywhere.  We figured this was bad news and that people had scattered to go refind this thing.  Eventually we caught sight of another birder driving slowly.  Our hopes were lifted when we saw him stop for awhile.  Did he see it?  Then he ended up going down a steep embankment onto what appeared to be a frontage road along I-90.  What was he doing?  We watched him go into this farm place.  You can see an east-bound semi on I-90. 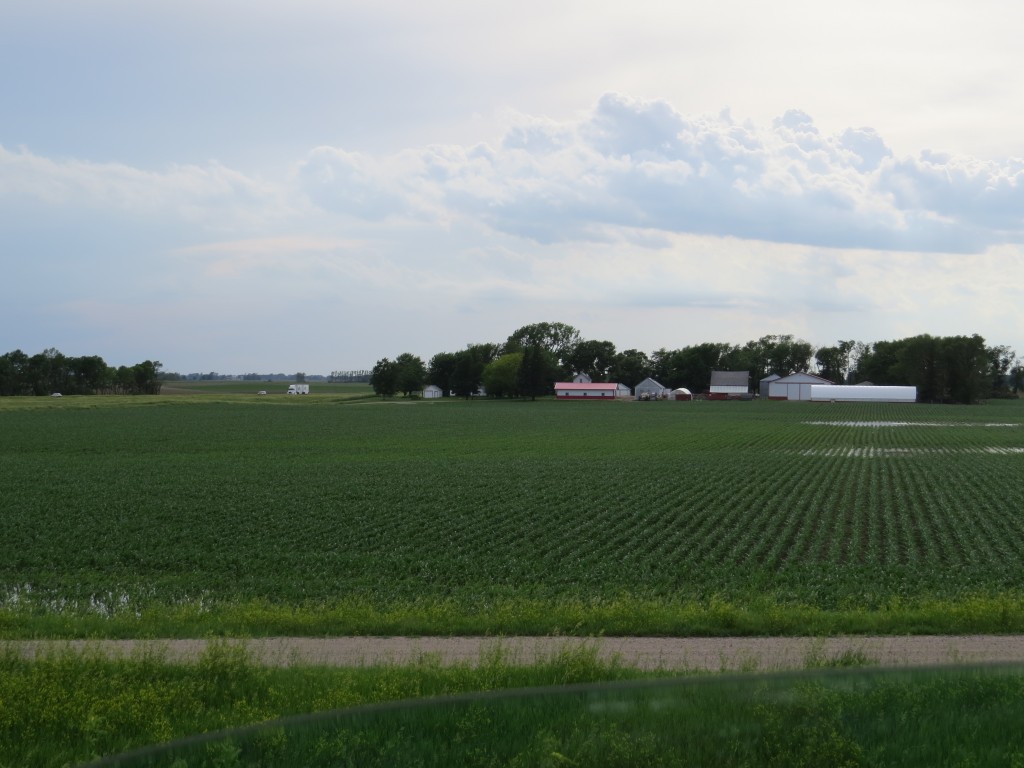 We watched. The car never came out.  Interesting.  Then, all of the sudden, two different cars were driving out of this long driveway, and two cars full of birders were driving in!  Quickly we headed down this driveway and stopped to talk to one of the outgoing drivers.  He confirmed what we suspected; the bird was there!

And so were the birders. 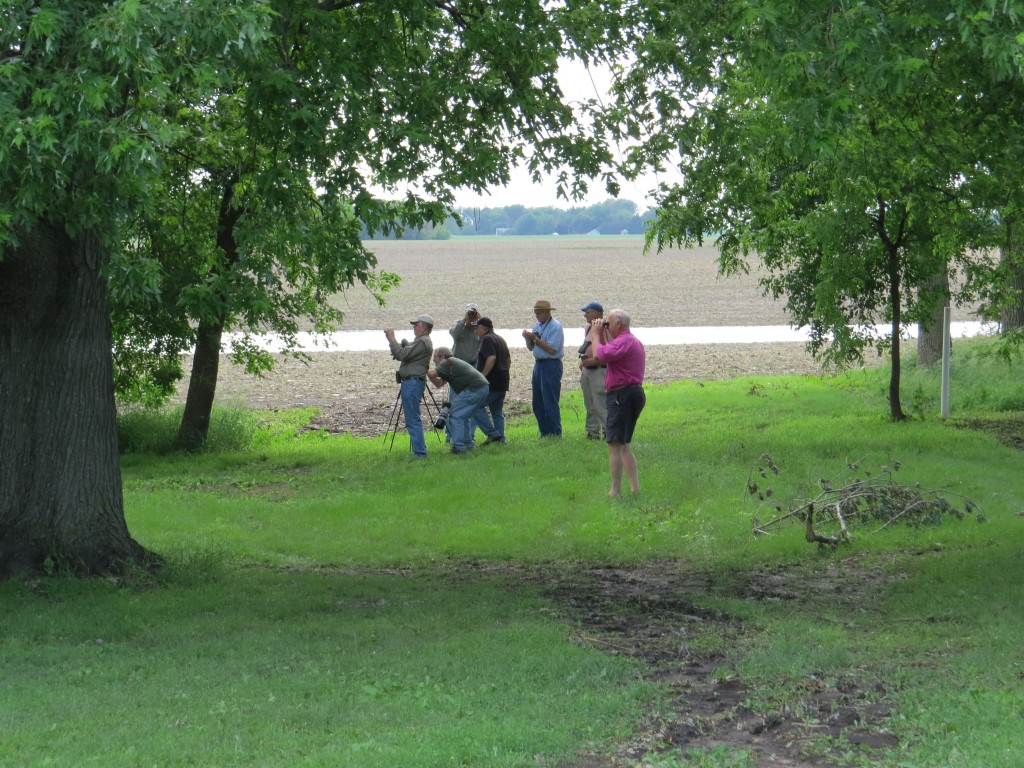 It was quite a party.  Everyone was pretty excited.  Marin picked up on the palpable excitement as she asked, “What are all these guys so excited about?”

This is what they were excited about, Marin. 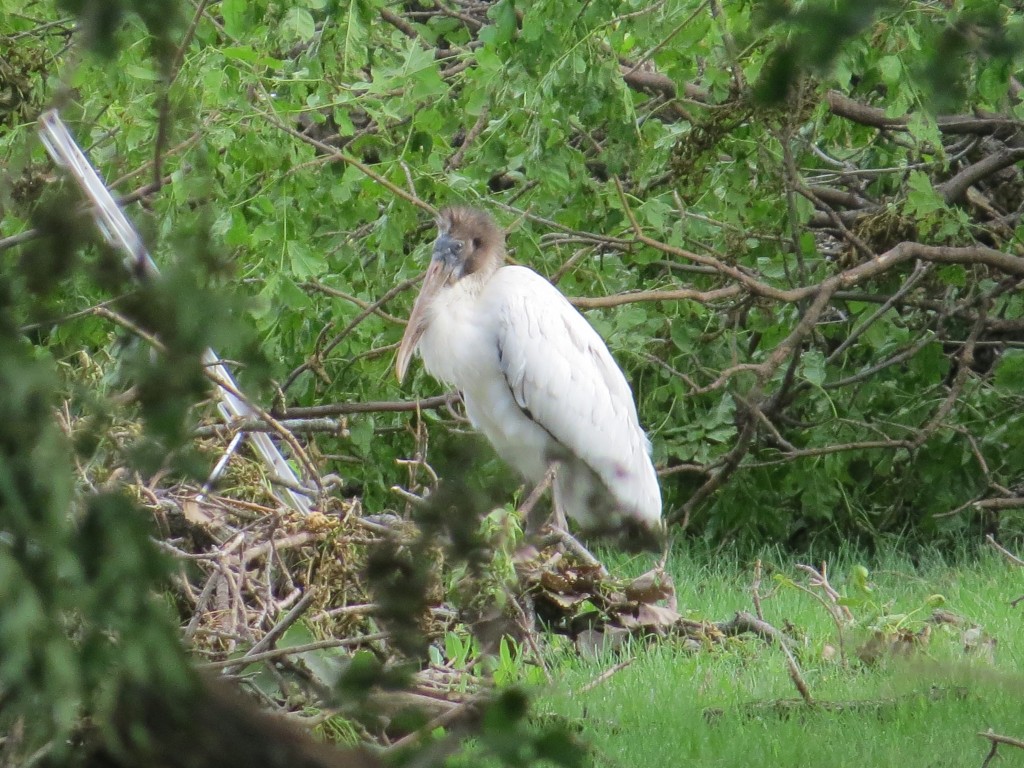 You would have swore the Vikings finally won a Super Bowl with how jolly these guys were.  It was pretty fun.  Even the kids wanted to see for themselves what the big deal was. 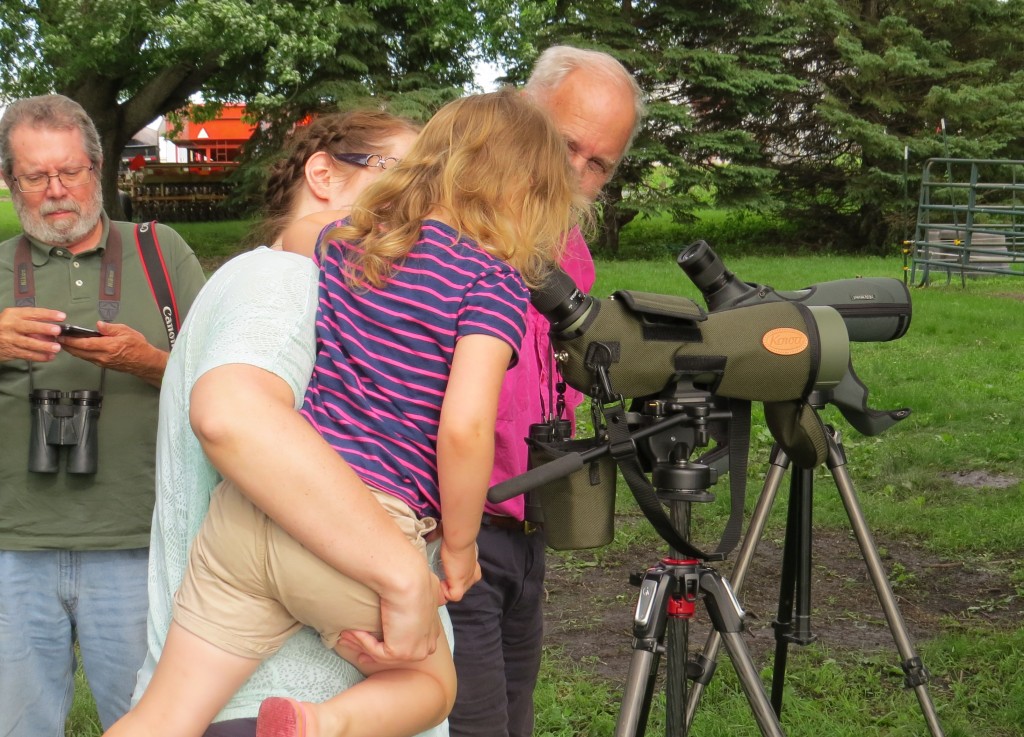 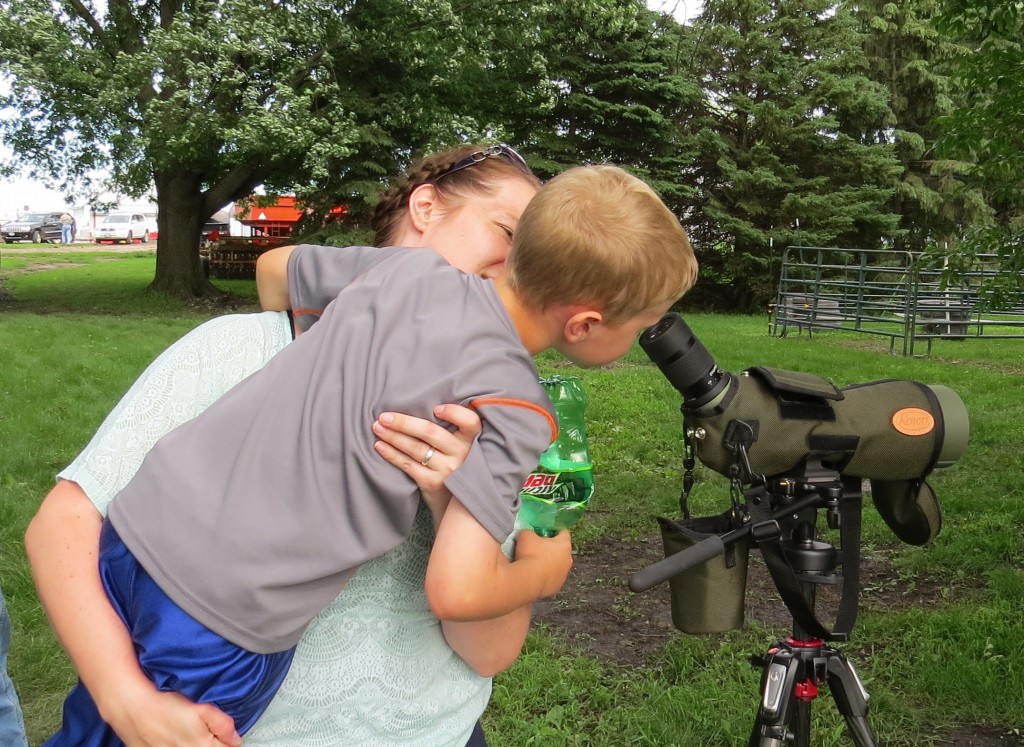 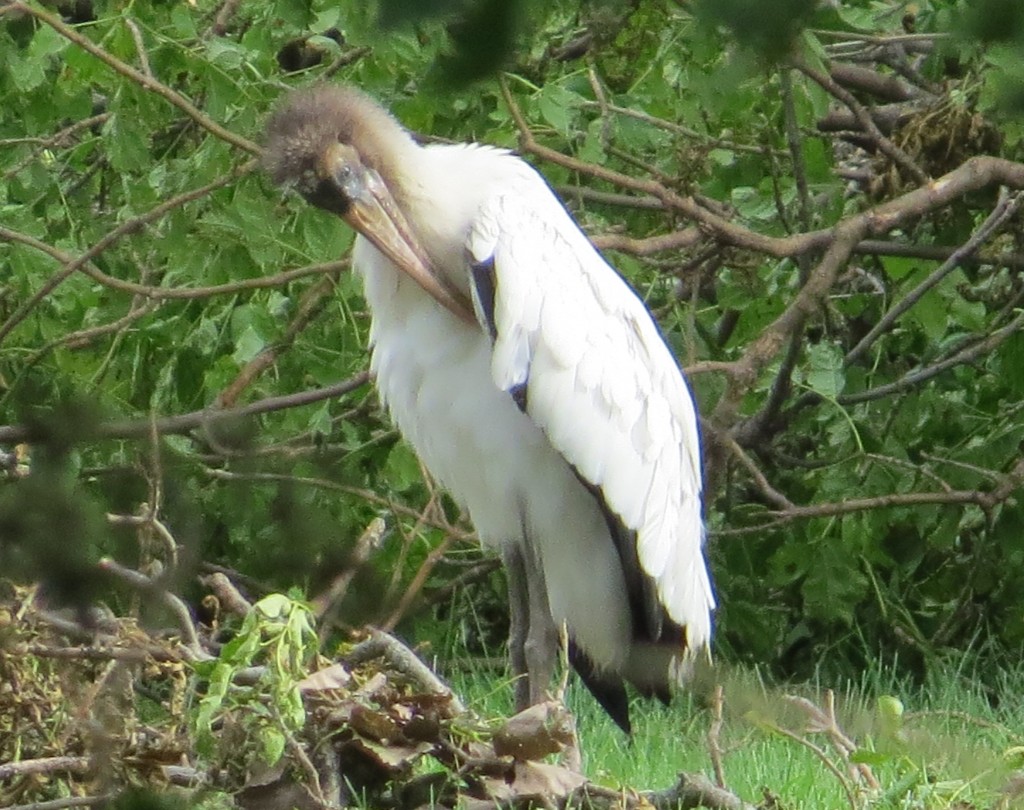 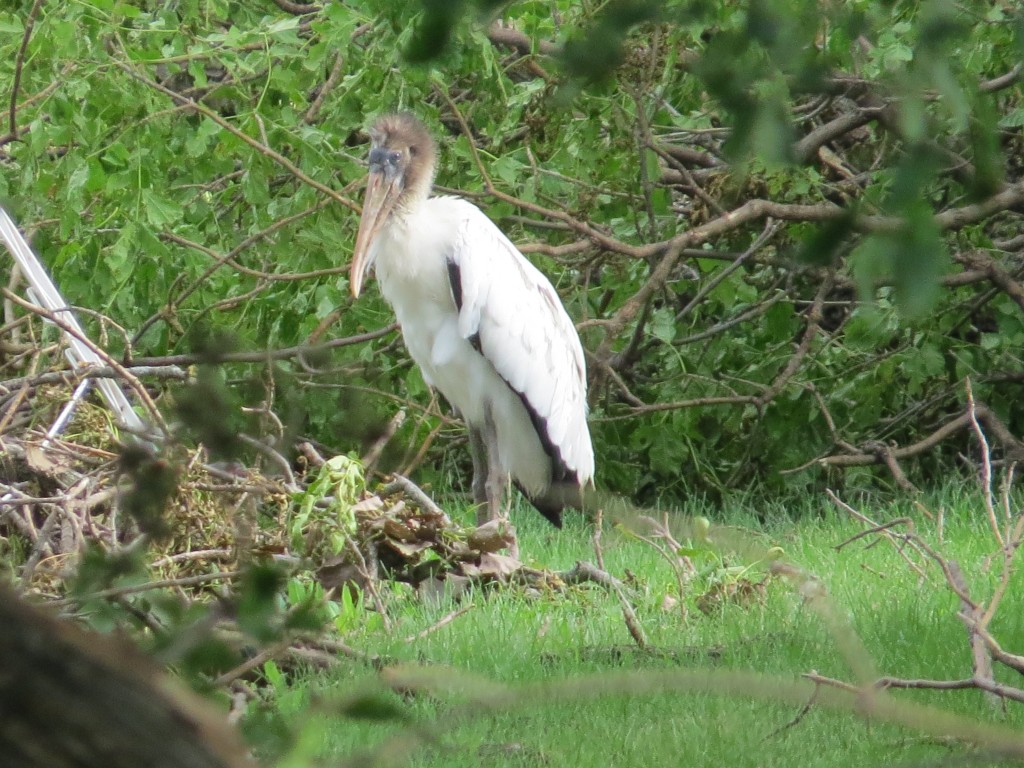 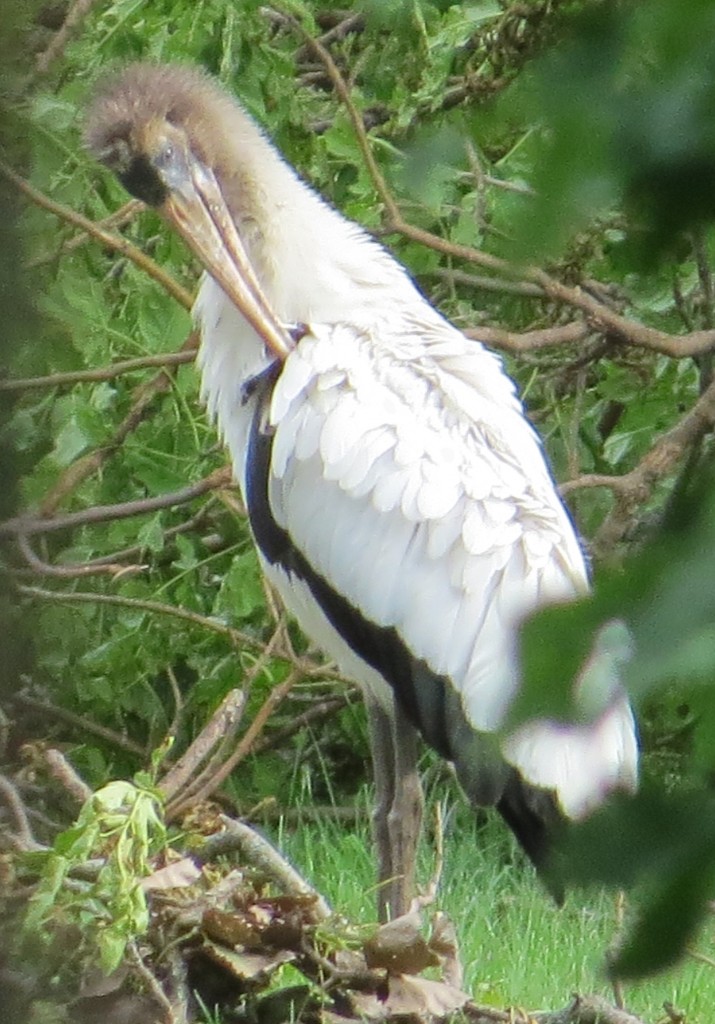 While I photographed the bird, Melissa and the kids went with Randy to check out some of the farmyard animals.  Apparently I missed Marin nearly get attacked by this giant rooster when it was chasing her while she ran, unbeknownst to Marin.  The ensuing screams would have likely scared away the stork, and I would have been banished from the birding circles of which I participate.  Thankfully Melissa thwarted the attack by getting Marin to stop running which then stopped the rooster from chasing her.  By doing so, she was able to keep the screams and stork at bay, keeping Minnesota birders happy and my reputation intact. 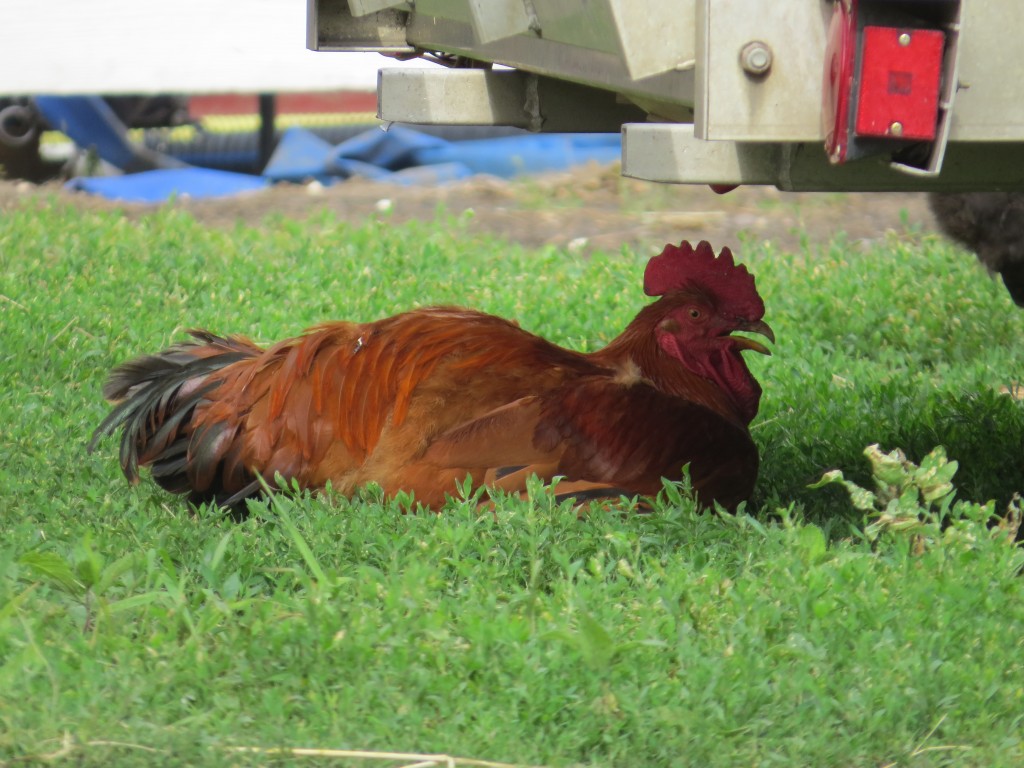 The kids love any chance they get to pet a cat since we can’t have one due to my allergies. 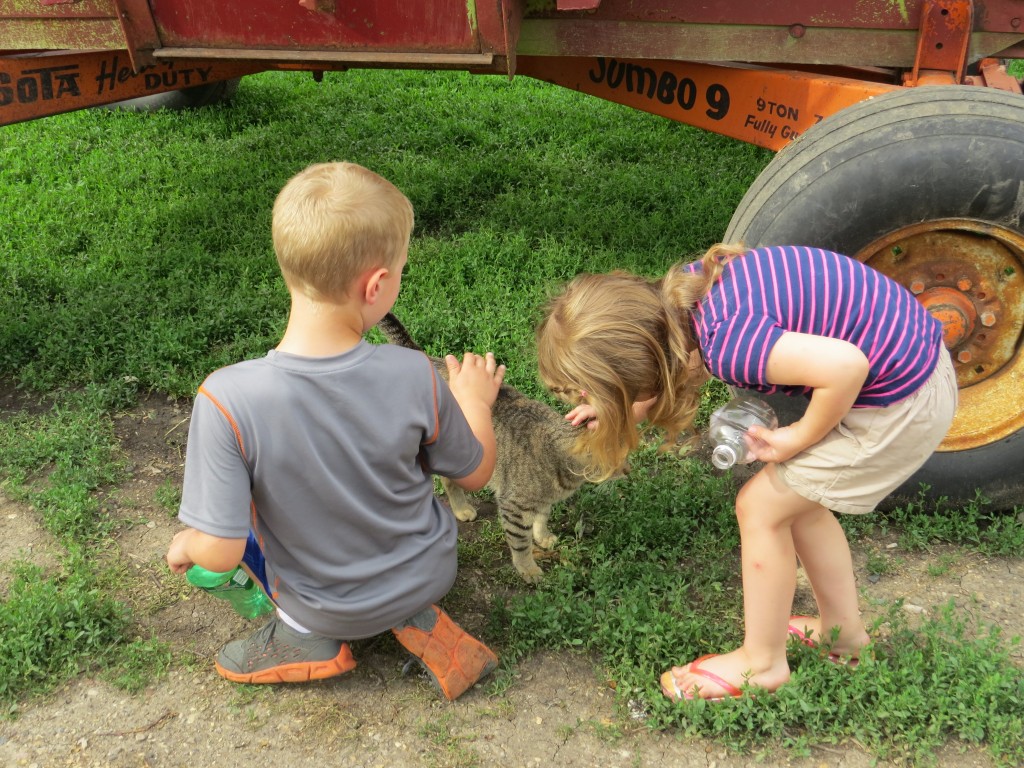 With enough stork and enough cat, it was time to leave.  We had a fun sighting just a half mile from the farm – an Upland Sandpiper at the top of a tall utility pole.  With almost zero habitat around I was surprised to see it. 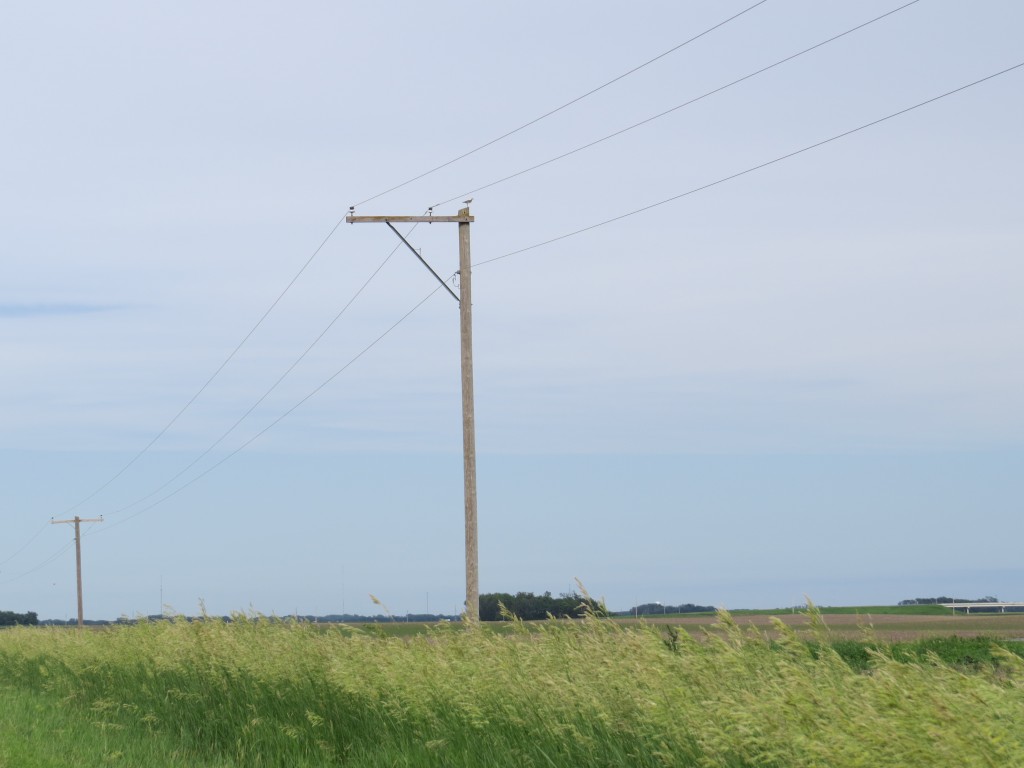 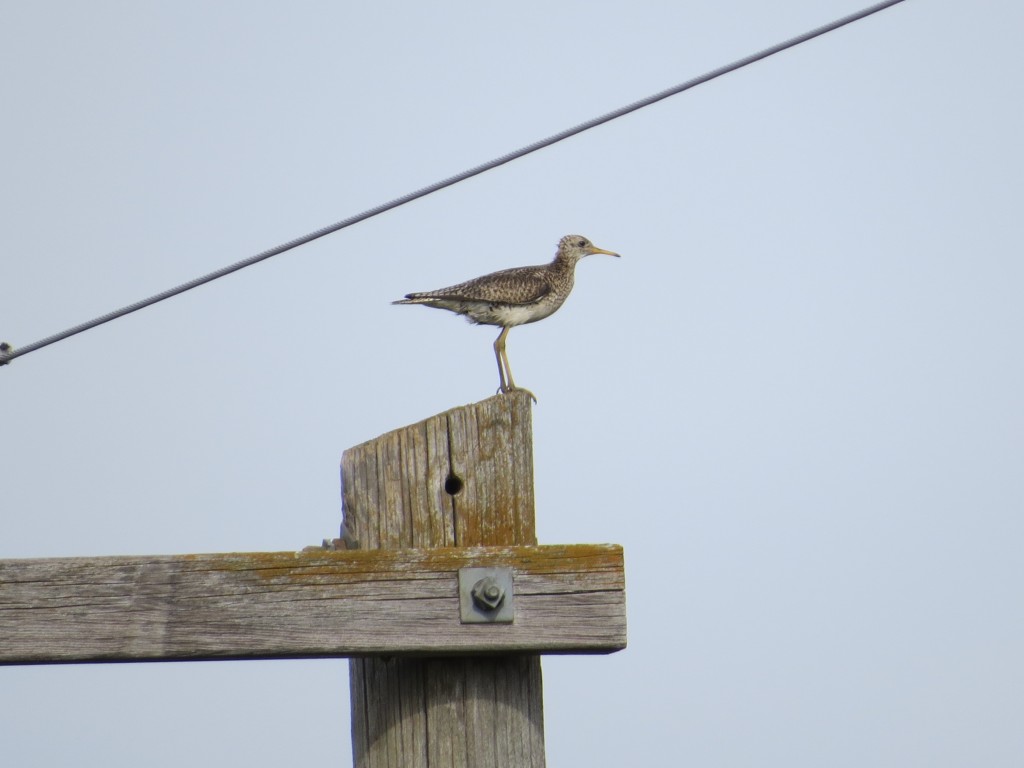 It was finally time to head home on the 3-hour return trip.  The visiting continued, but this time it was Marin who was talking everyone’s ear off and thoroughly thriving on the attention of a new person in the car.  By the time we got home our bodies and ears were tired.  It had been a whirlwind 7-hour adventure.  But it was a lot of fun to do something spur of the moment and witness something unique as a family.  I told Melissa that it’s probably the closest thing she’ll get to experiencing a flash mob like she’s always wanted to see.

4 thoughts on “Wood Stork in Minnesota!”