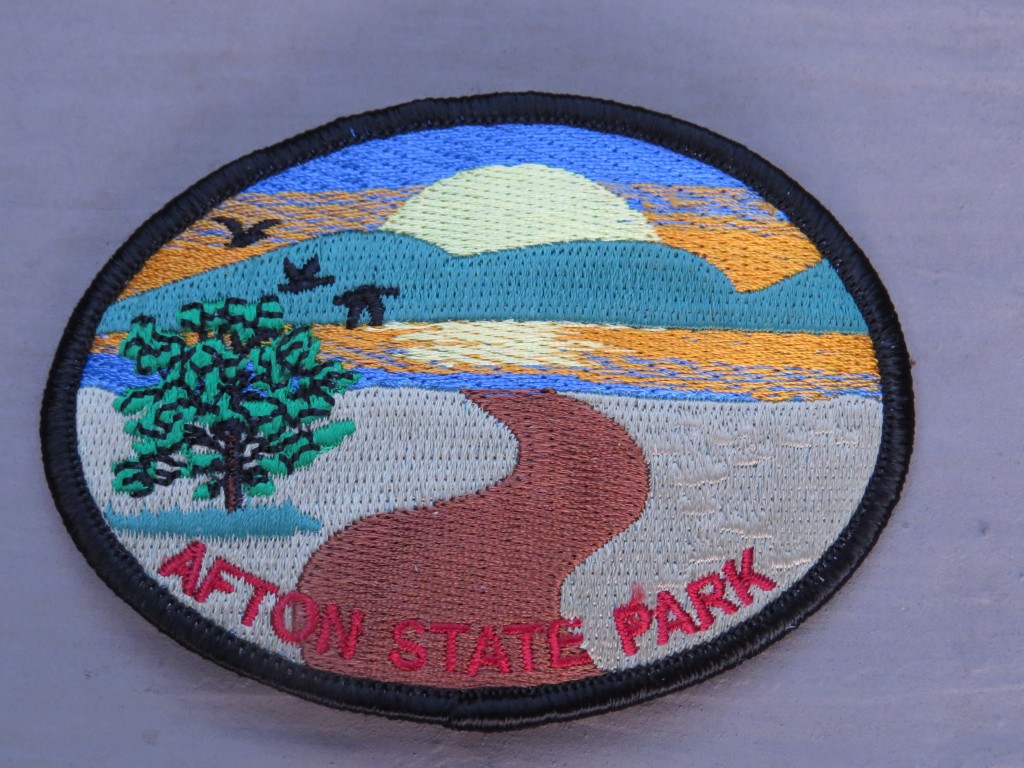 Anyone who read our blog last summer may recall that we have a special fondness for state parks, especially those that hold new and exciting birds.  One of the bonuses of visiting a new state park is that Evan gets the park’s signature patch for his birding rucksack.  We are not indiscriminate in which parks we visit.  There has to be a compelling reason to go to a certain park.  Afton State Park had been on my radar since last year when Pete Nichols, the moderator of the Minnesota Birding Facebook Group, discovered a Hooded Warbler there.  Hooded Warblers are rare but regular in Minnesota, and they are a bird I’ve been wanting to see.  This year Pete rediscovered not one, but three of these birds at Afton!  Additionally, there were many other birds popping up at Afton that we’d never seen.  The most prominent that I would consider equals with the Hooded Warbler is the Prothonotary Warbler.  There were also Henslow’s Sparrows (many), Blue-winged Warblers, Black-billed Cuckoos, Eastern Towhees, Tufted Titmice, Summer Tanagers, and Bell’s Vireos.  The Hooded Warbler alone would have brought me to the park which is east of St. Paul and on the St. Croix River that runs between Minnesota and Wisconsin.  But this buffet of potential life birds made it a must-visit spot right now.  In fact, I even pulled Evan out of a couple days of school to make the trip.  Let’s face it, if we didn’t have all the snow days this past year, he’d be out of school by now anyway.

One complication with Afton is that you can’t pull a camper there.  That wouldn’t be a problem as we can tent it, but the tent sites are back-pack sites which means a significant hike – not a task I wanted to do with two kids. The park’s saving grace is that it has camper cabins for rent at a very reasonable rate. So that’s what the kids and I did. 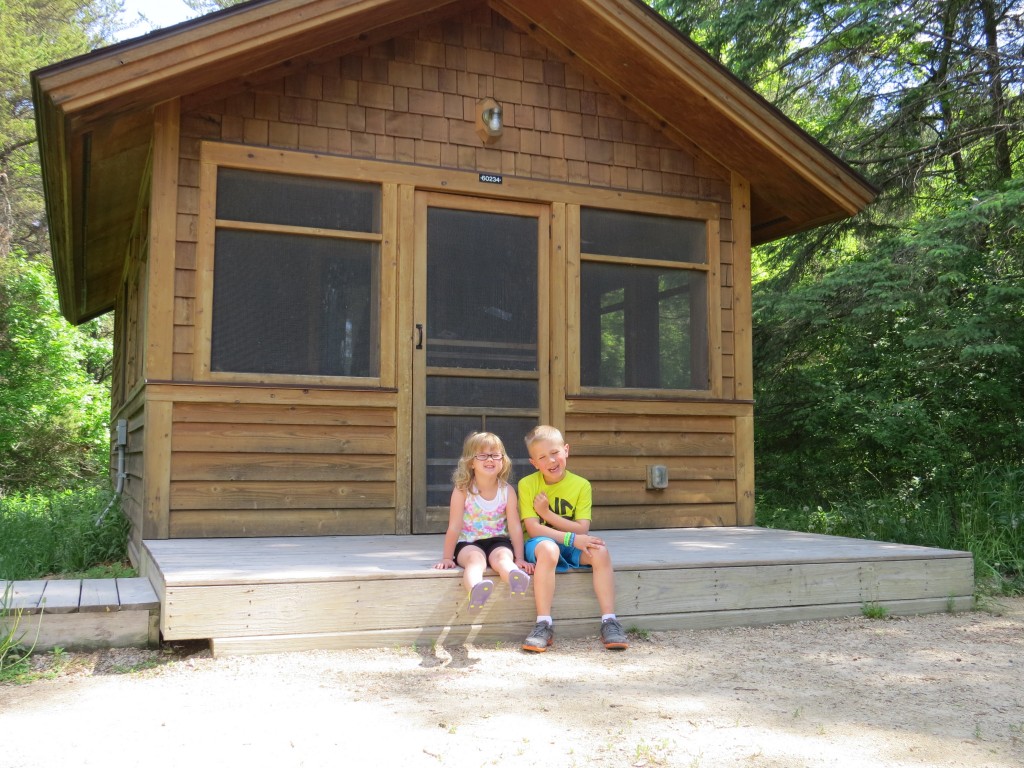 They were pretty enthralled with the accomodations.  Seeing how nice the cabins were and how cheap they are to rent, I started to question why I bought a camper.  Oh well, variety is the spice of camping. 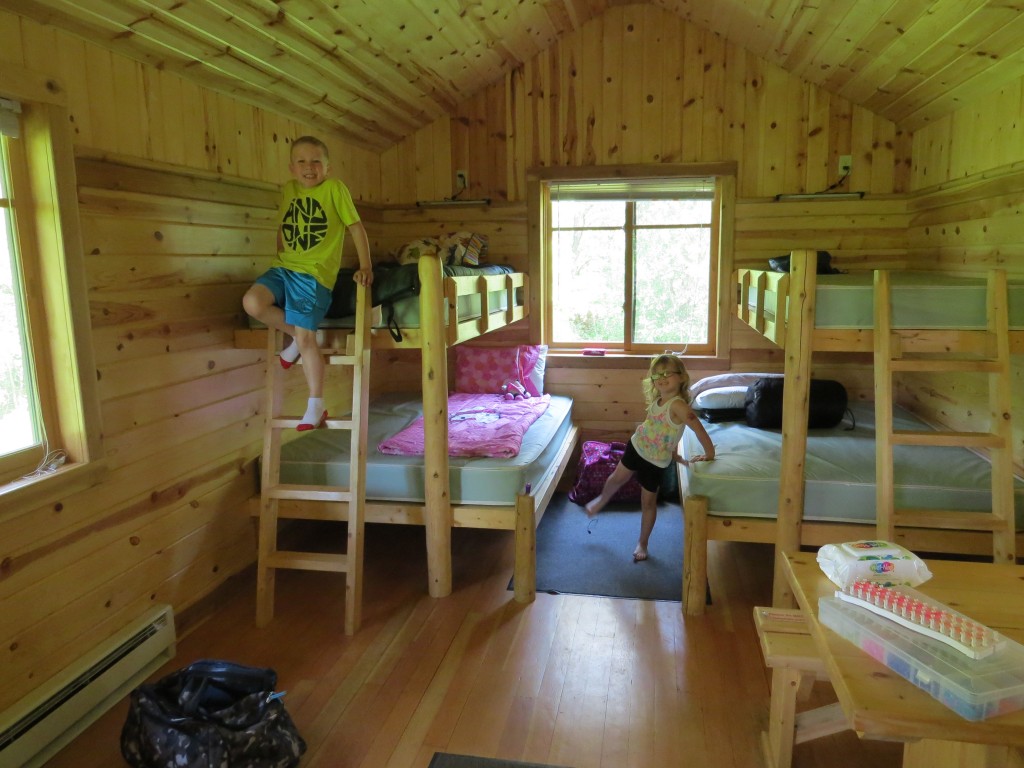 The cabin was nice and all, but I was itching to find one of the nearly ten potential life birds that could be had in this park.  So after we unpacked, we headed for the car to drive to our hiking destination.  But I jumped back when I discovered this 4-foot Fox Snake between me and my car! 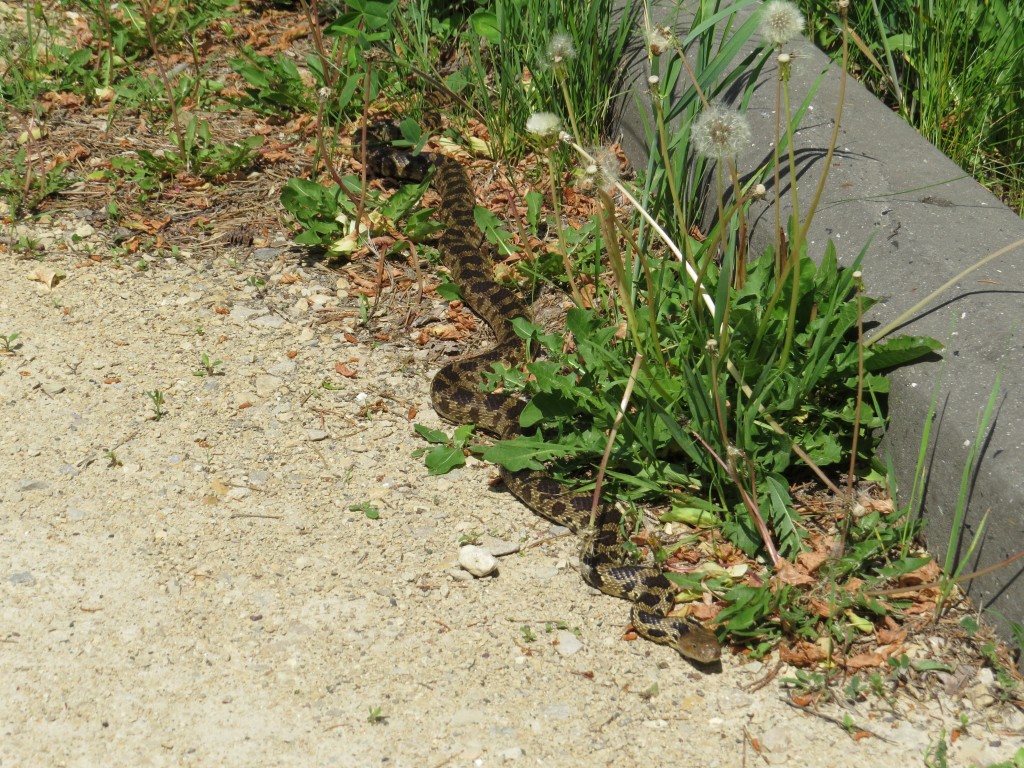 What a sighting!  I’ve never seen anything like it in Minnesota.  The kids and I were within just a few feet of it checking it out.  I couldn’t resist touching it.  In my younger days I would have caught the thing, but I wasn’t up for that.  He shot off like a rocket the instant he felt my touch.  Then it disappeared in the weeds, gone for good. Or so we thought.

And how do we know it was a Fox Snake?  Marin discovered it on a poster at the Visitor’s Center (and it was confirmed by Randy).  She was quite proud that she found it. 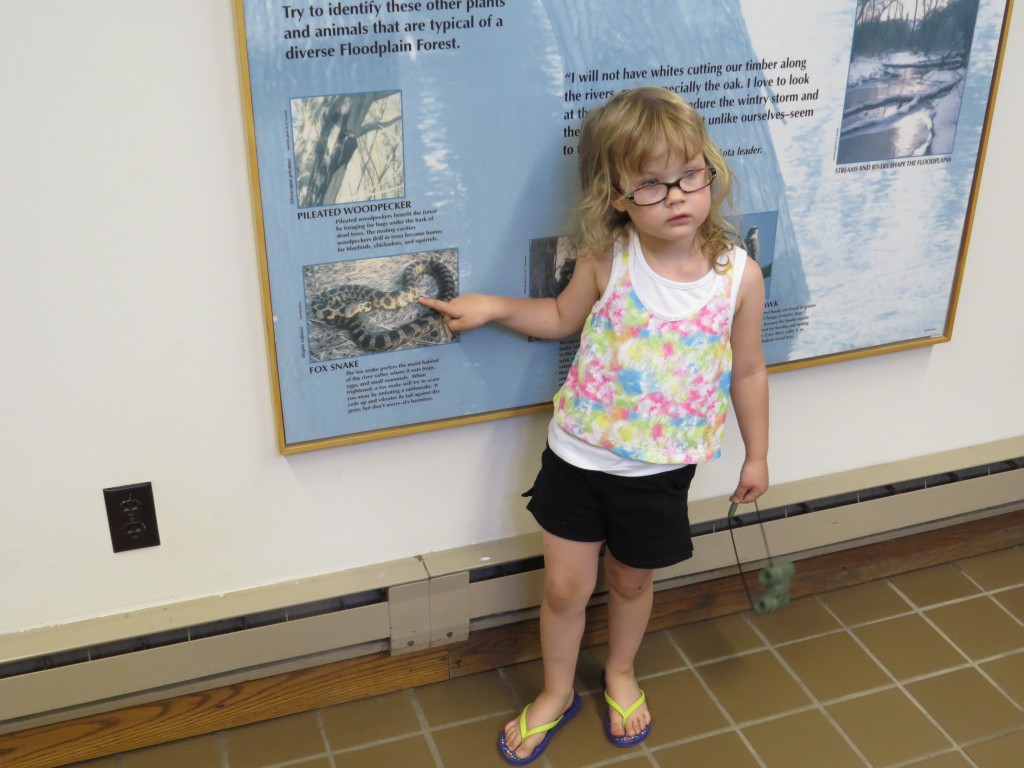 The kids and I finally made it to the area where we needed to hike for the Hooded Warbler.  Our path would go down a large hill to the St. Croix River where we could walk the river bottoms trail and look/listen for this warbler.  The hike down was full of stops and starts as one kid or the other had some emergency or another, mostly bug or heat related.  Finally we gave up and went back to the car.  No Hooded.

As we drove through the parking lot a meadowlark with a lot of white in its tail flushed up and landed in the tree next to us.  I was confident it was our Eastern Meadowlark lifer because the Westerns are rare visitors to the park and the Easterns are classified as common.  I was waiting for it to vocalize, the surest indication of what species of meadowlark it was. 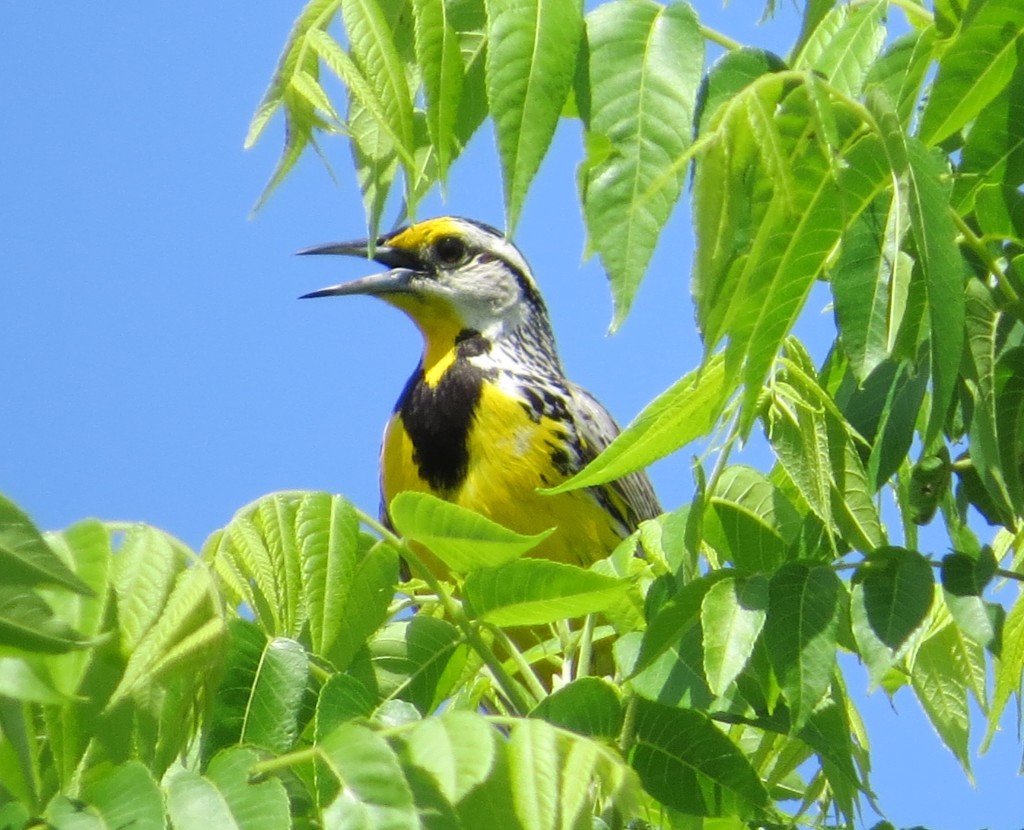 As we spent more time in the park, we saw and heard many Eastern Meadowlarks. Though its simple song is far inferior to our melodic Western, it was fun to hear and be able to gain confidence in distinguishing the two species.  Because it is nearly identical to the Western Meadowlark, it wasn’t an exciting life bird, just a tick on the life list.

When we got back to cabin, we had another visitor – the Wild Turkey.  This tom (he’s shy about showing his beard) didn’t really care that he was blocking our way. 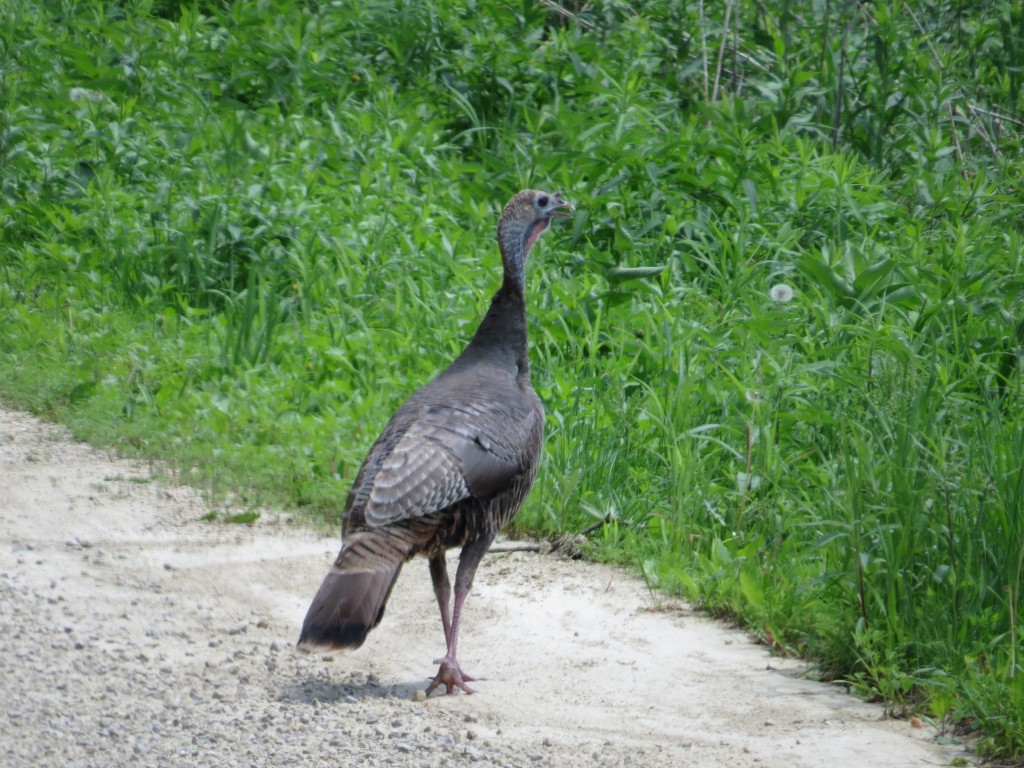 After some lunch, a nap, and some bunk-bed antics, it was time to go out for another walk.  This time we were going to hit the north prairie loop to look for Henslow’s Sparrows, Black-billed Cuckoos, and Blue-winged Warblers. 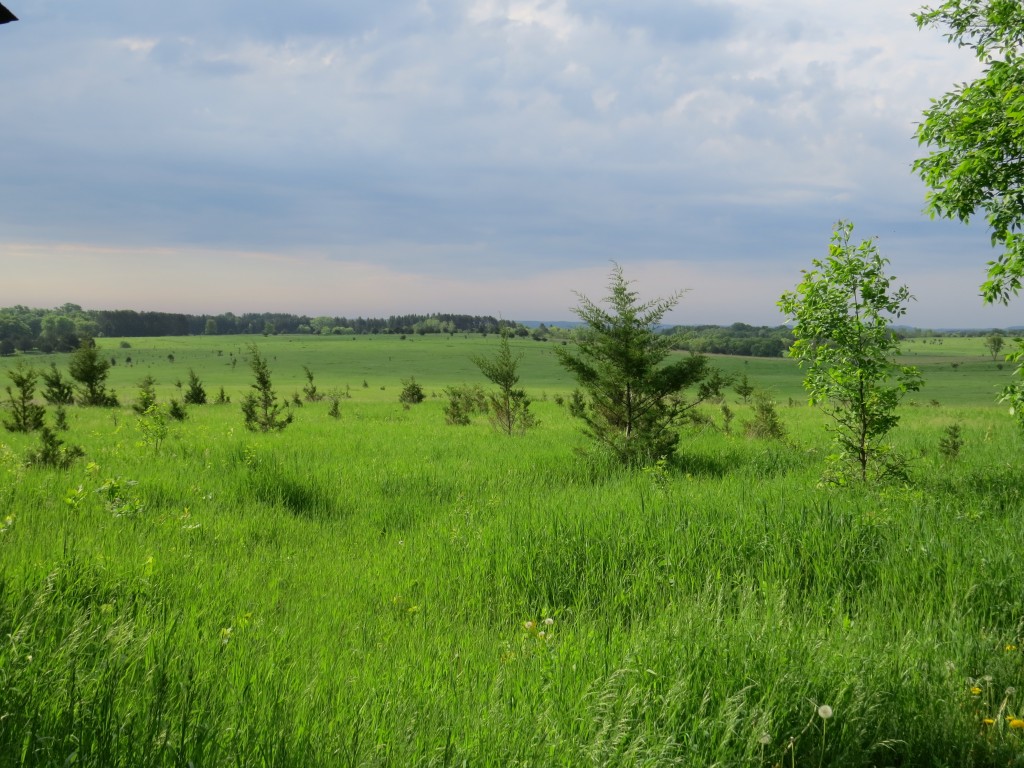 We walked in the hot sun and didn’t come up with anything.  I didn’t hear a Henslow’s, and I certainly didn’t see a Cuckoo in the nearby woods.  We did end up seeing our Blue-winged Warbler lifer in flight.  It was a dull yellow with bluish wings, and it was in an area where they had been seen.  We saw it fly into a pine.  I watched for it to show itself, but then an American Goldfinch popped out.  I asked Evan if that’s what we had seen.  His answer confirmed my own thoughts when he said the one we saw wasn’t as yellow and had blue wings. Finally our bird popped out again, flying away and not landing in sight.  Bummer.  It’s not the way I’d like to get a lifer.  A good solid view is a must followed by a good photo.

At least this Eastern Bluebird posed for a photo even though they are quite common wherever there is prairie.  Though I wish a Black-billed Cuckoo were sitting in his place, I couldn’t pass up a chance to photograph a bluebird. 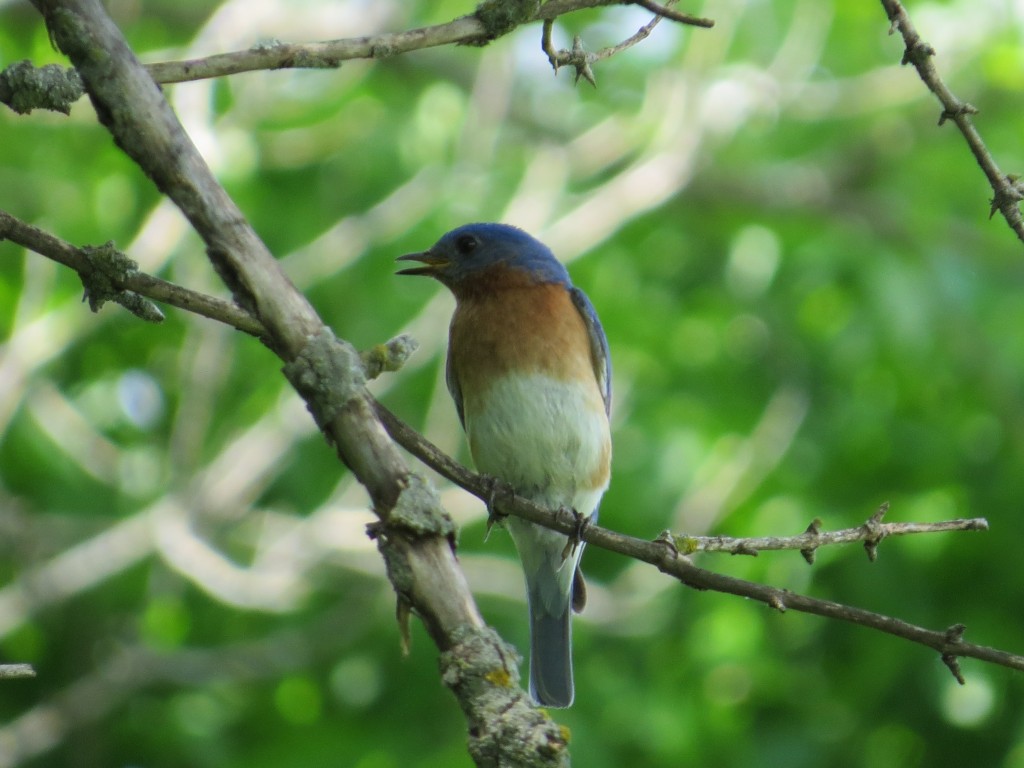 After our prairie hike it was back to the cabin for more food and rest (me) and more horseplay (the kids).  I told the kids we’d go on one last hike in the early evening and then come home to make a fire and cook supper.  This time I was determined to get us down to that river bottoms trail to adequately search for that Hooded Warbler.

We drove a little ways down the road and look who was sunning himself!  I’m not sure this is the same snake as before or even the same species.  But two mega snake sightings in one day was incredible! 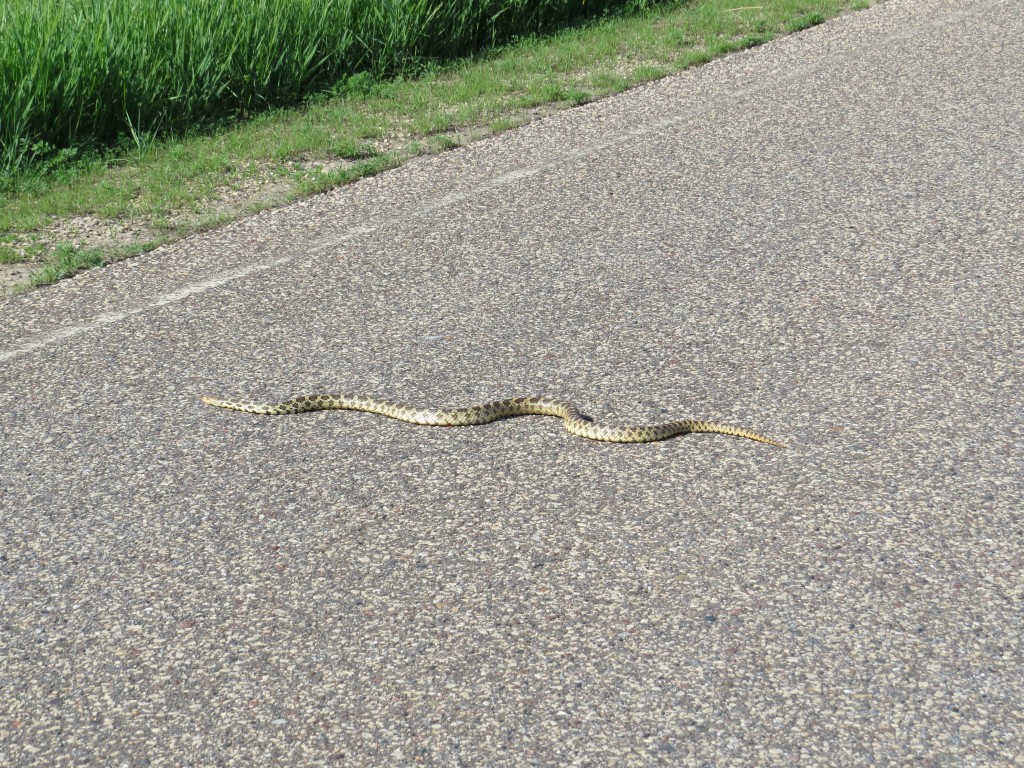 After this experience we finally made it to the trailhead.  This time things went a lot smoother with a lot less complaining.  The hike down the large hill was the most challenging as the sign shows, though Marin was convinced the sign meant it was a snake trail.  Given our day, who could blame her?  Here you can see Evan contemplating her observation. 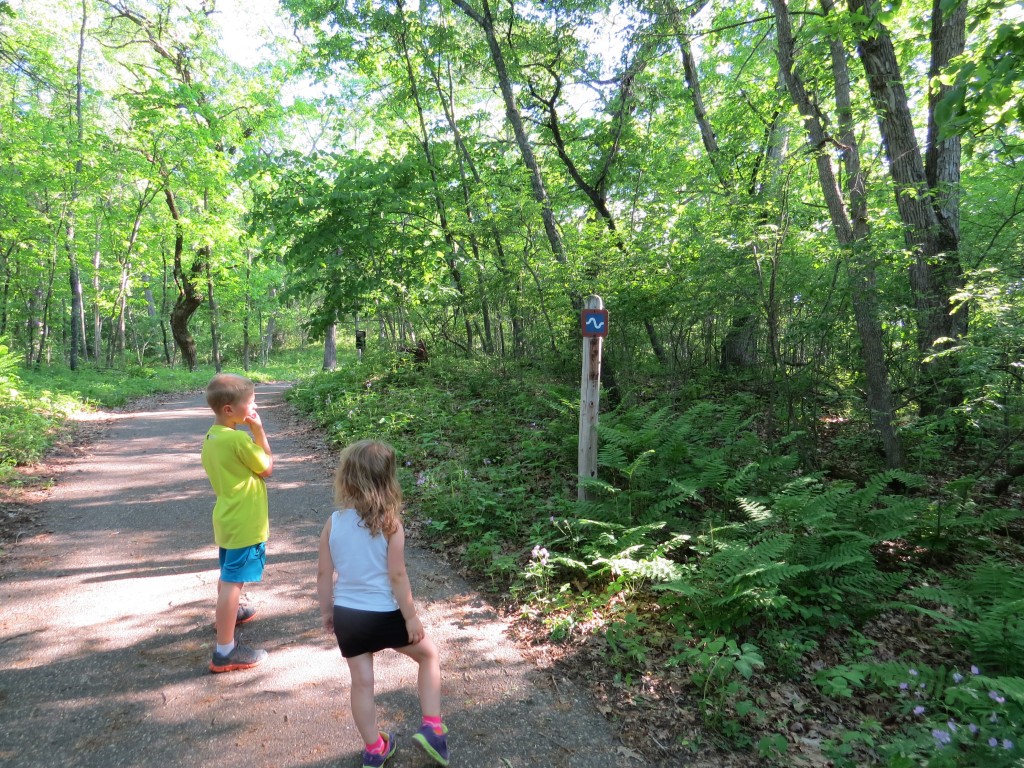 The river bottoms trail was flat and easy as it took us right next to the St. Croix and right along the base of an oak-wooded hillside where the Hooded Warblers were known to be. I knew the song well as its been my phone’s ring tone for some time, but I just wasn’t hearing it.  Argh.  Later on, though, as we passed by some flooded timber along the edge of the river, I heard the distinctive call of the Prothonotary Warbler! Not the main target, but good enough!  After a little while we got to lay our eyes on it.  What a thrill it was to see it for the first time! 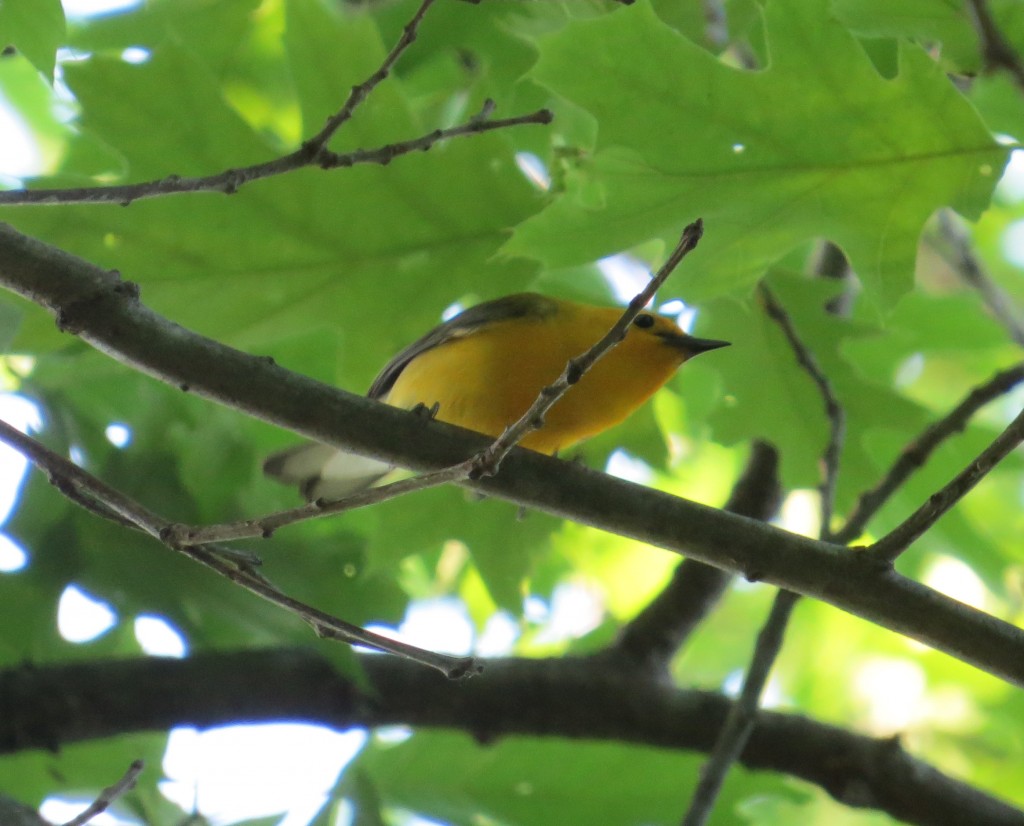 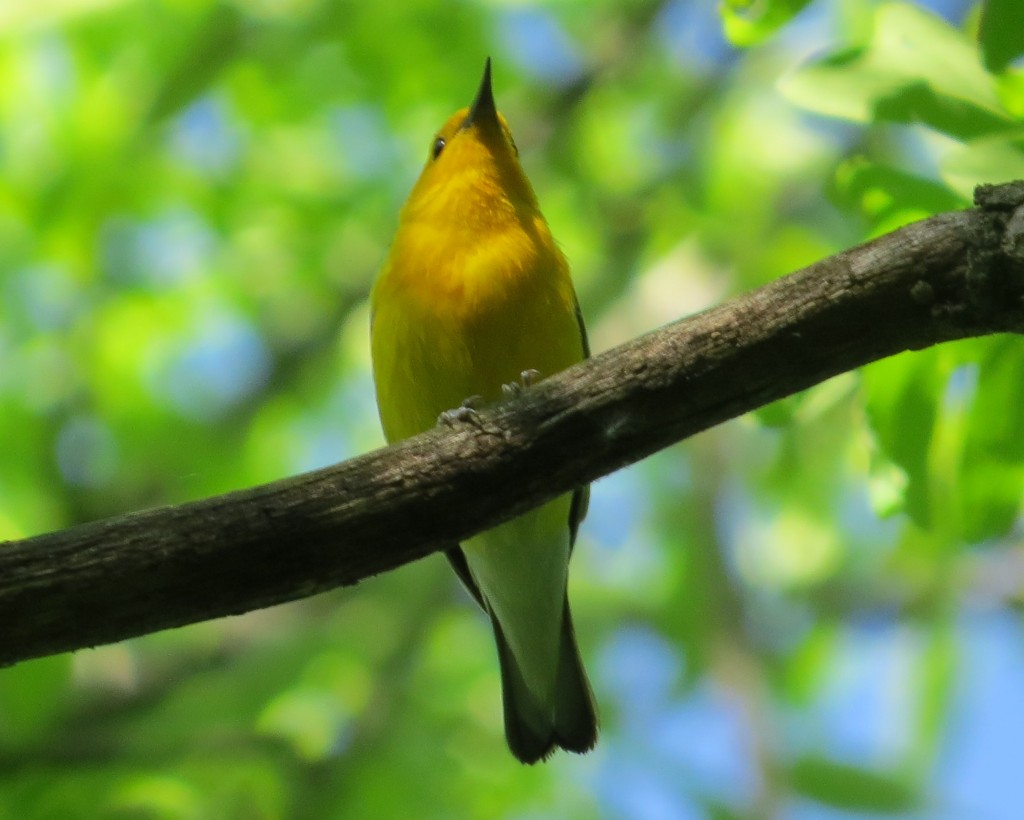 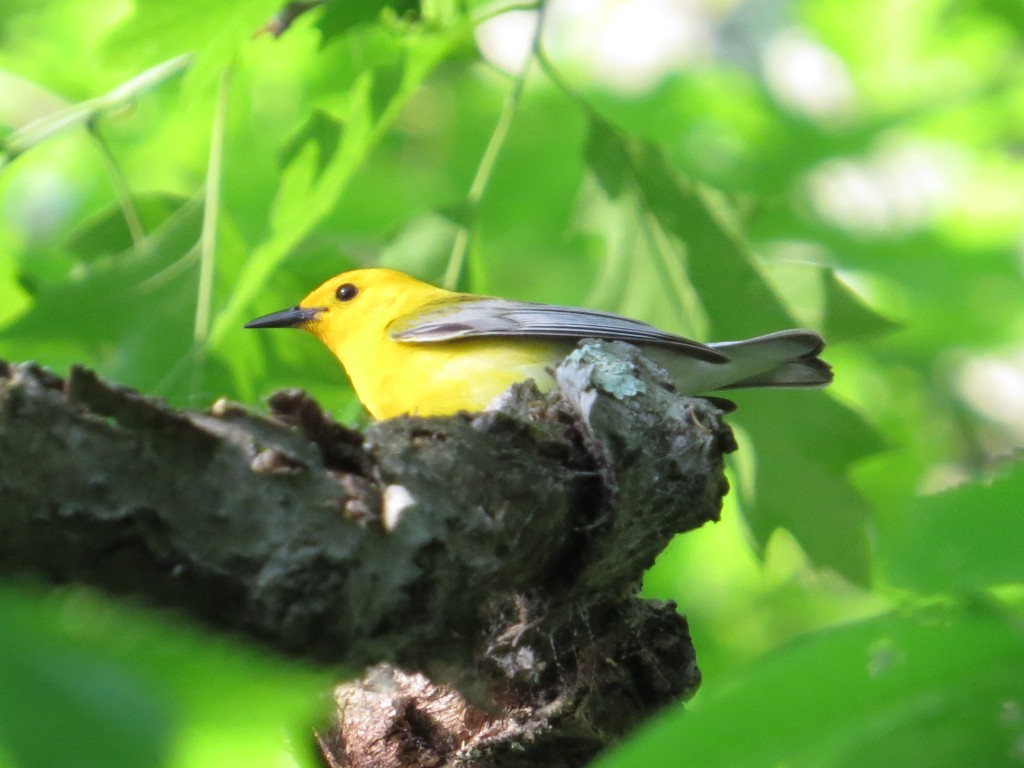 If there would be no Hooded Warbler, it didn’t matter so much anymore with this bird.  It was quite a sight.  We never did see the Hooded that day; it would have to wait until the next day.  The kids were tired, so we headed back to the cabin for supper and bed even though there was a good hour or so of daylight left.  We pulled in to find yet some more visitors in the campsite – three deer! 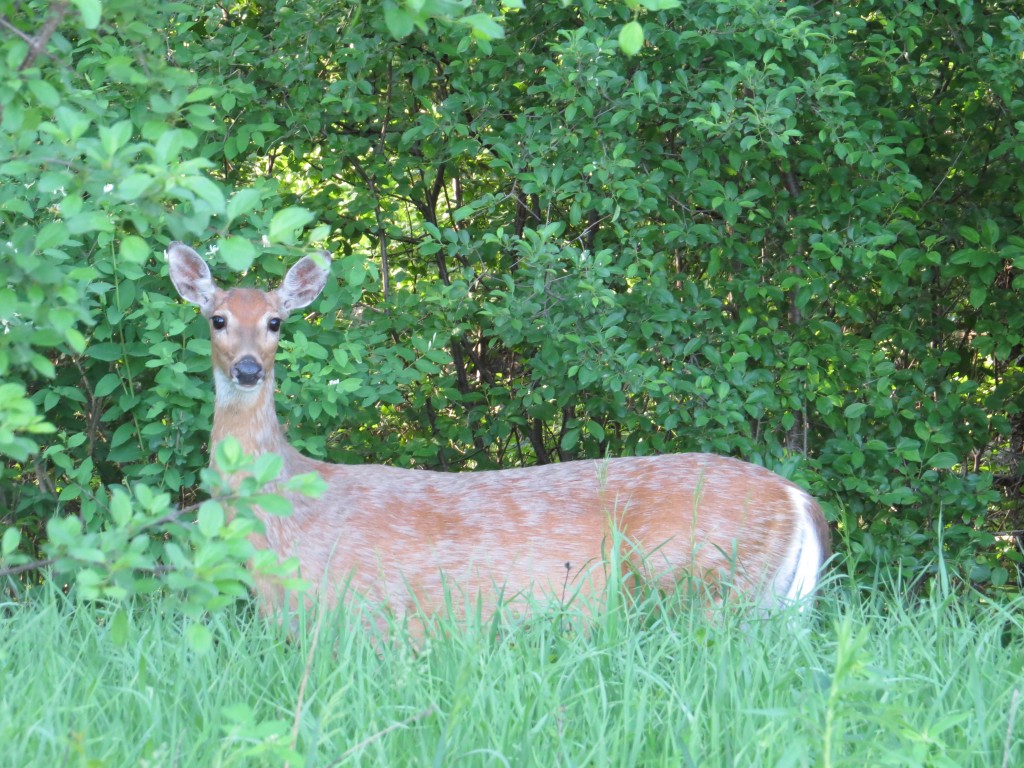 As I had made a trip out to the car after getting the kids in their pajamas, I heard the distinctive “Drink your teaaaaa!” song of the Eastern Towhee!  This would be a life bird, and its song was coming from across the prairie to the south of our cabin.  Quickly I had the kids throw their shoes on, and we followed this bird’s song.  I was able to locate it at the top of a dead tree belting out his tune for everyone to hear.  And he did not care that we were watching him from down below.  Nor did he care that Marin sang his song with him.  I’ve been looking forward to seeing this bird for a long time, so it felt pretty good to get this one on the trip. 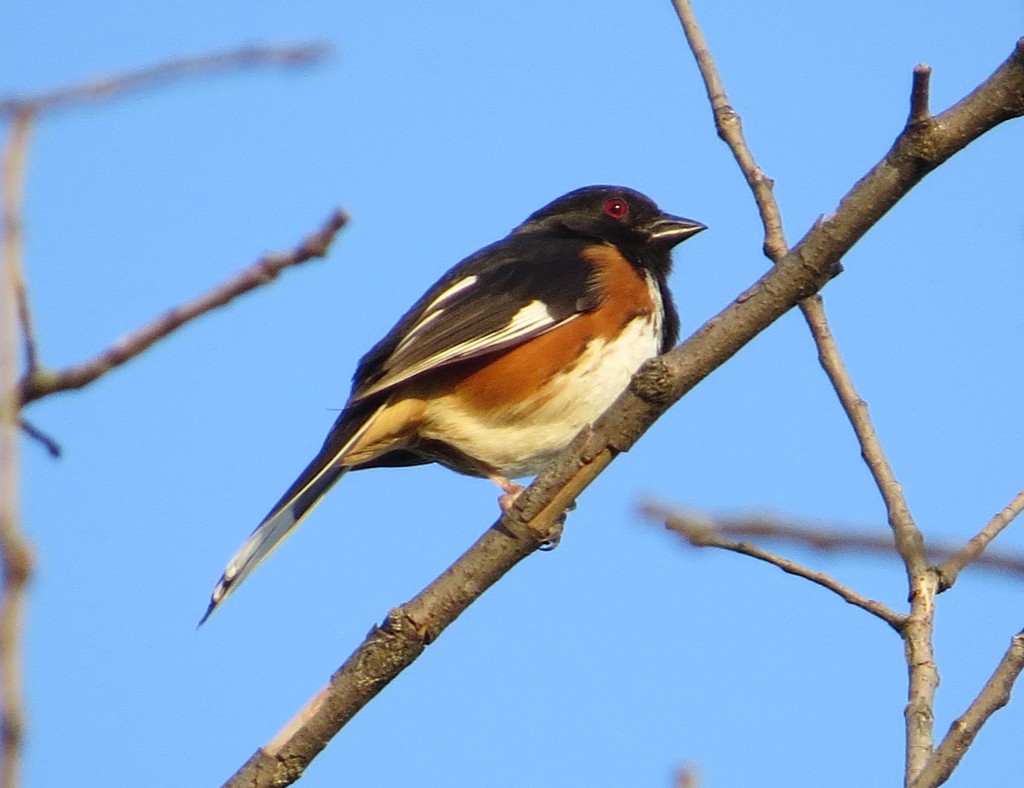 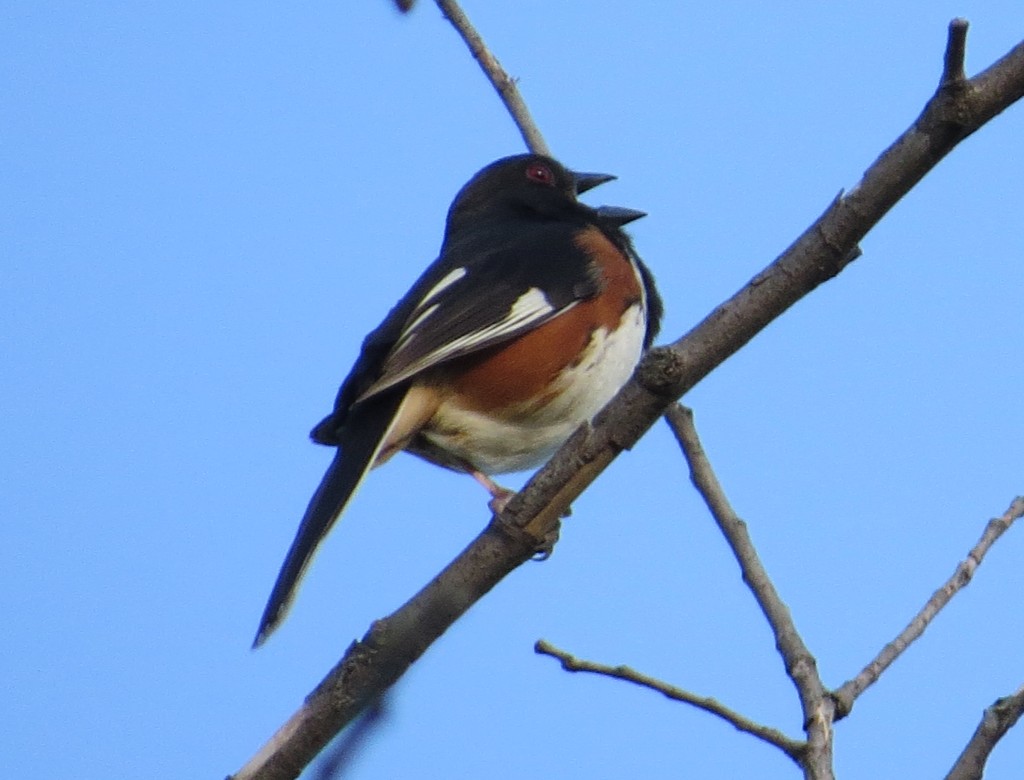 When we got back to the campsite this time, a fox scampered out of our campfire area. What a magnet for wildlife this little spot was.  It would be fun to see what the next day would bring.

That next day I decided we would do the river bottoms trail one last time and the prairie loop one last time.  If we didn’t get our main target or some other lifers then so be it.  All the river bottoms trail yielded was another look at the Prothonotary Warbler which never gets old.  The prairie loop trail didn’t provide the Henslow’s Sparrow we were looking for or give any better looks at that Blue-winged Warbler.  It was fun to see a Field Sparrow, which is a fairly uncommon bird. 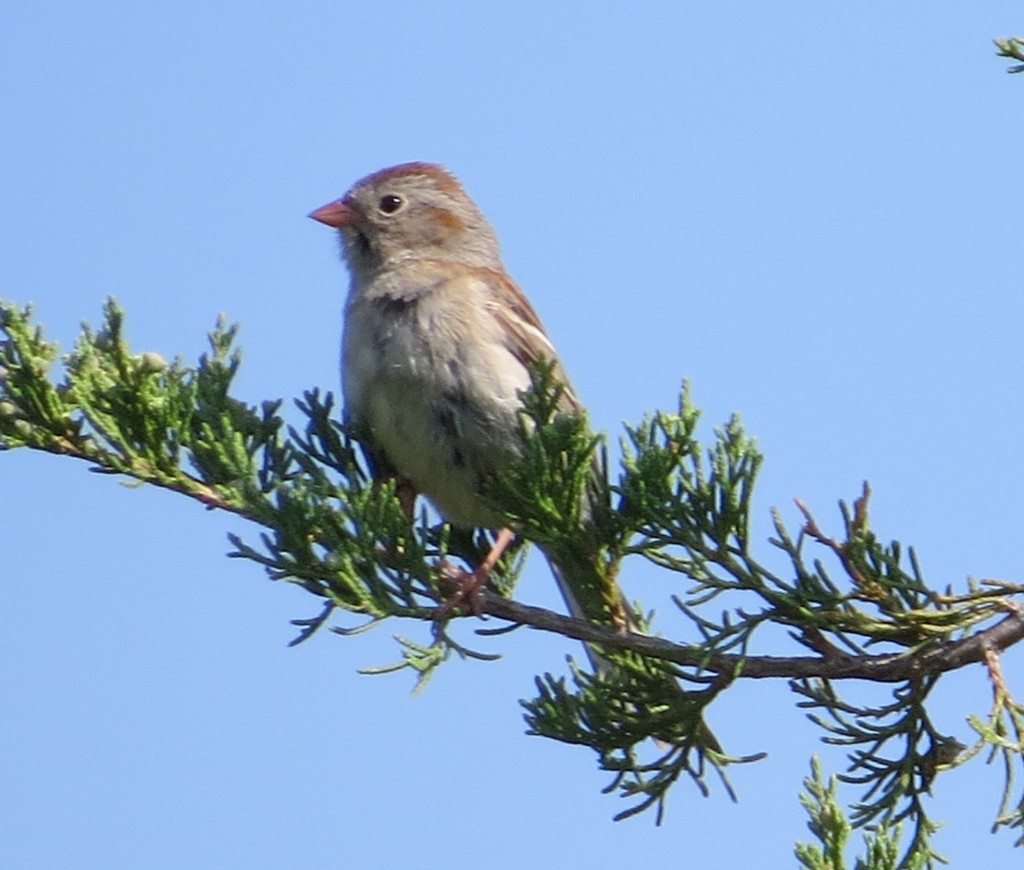 It was also a treat to see a male Orchard Oriole, even if he was a long ways from the road. 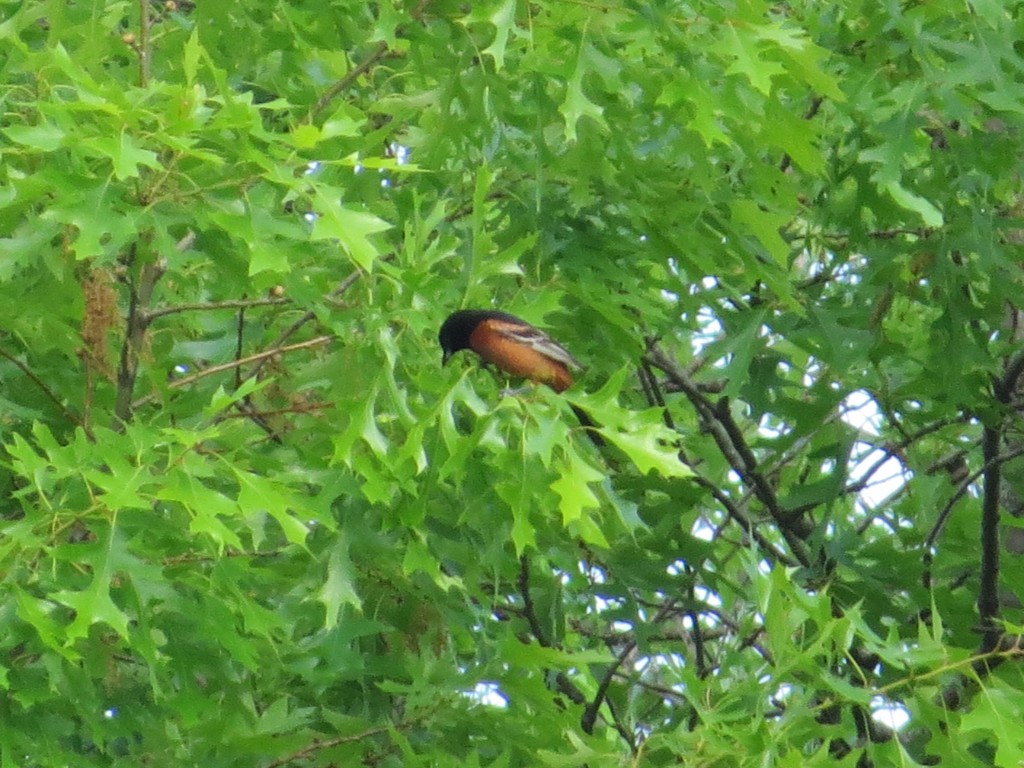 It was finally time to go.  I had a couple more birding moves to make, though.  The night before someone reported a pair of Tufted Titmice at the Hidden Valley Park in Savage.  I decided we’d swing by and check it out.  There were plenty of birders there, but there were no binoculars or cameras pointing to the trees – not a good sign.  Turns out that no one had been seeing them all day.  The kids had fun at this cool, well-named park that had a small river running through it.  The big draw for them was looking for tiny shells. 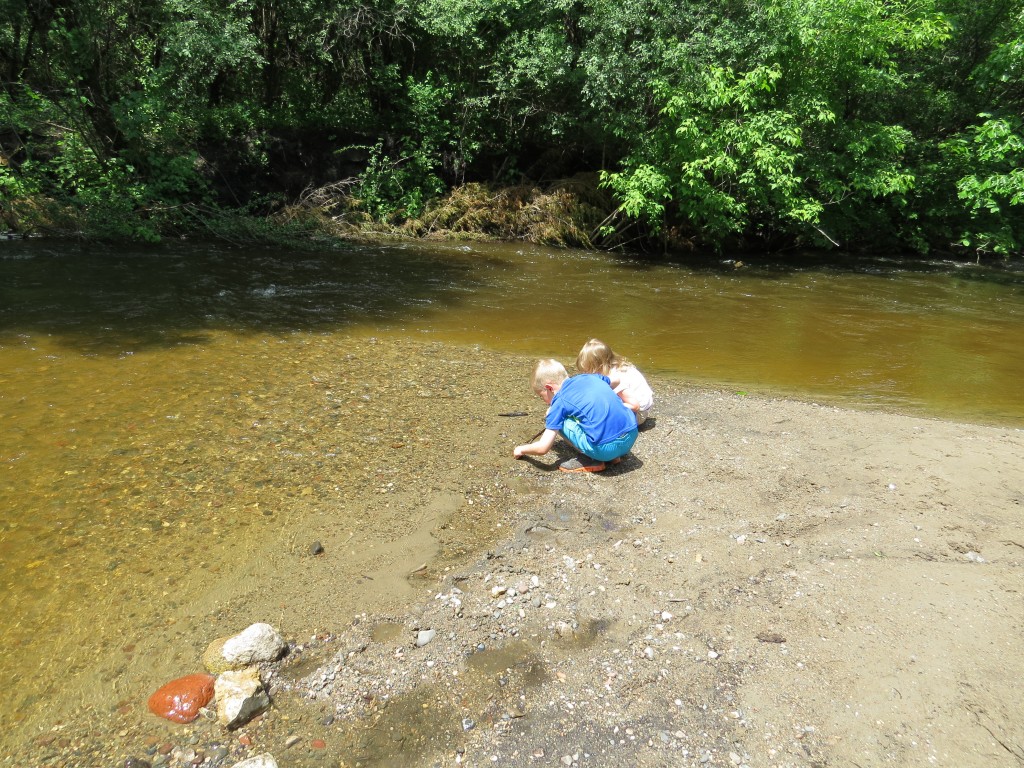 Looking for shells at Hidden Valley Park in Savage, Minnesota 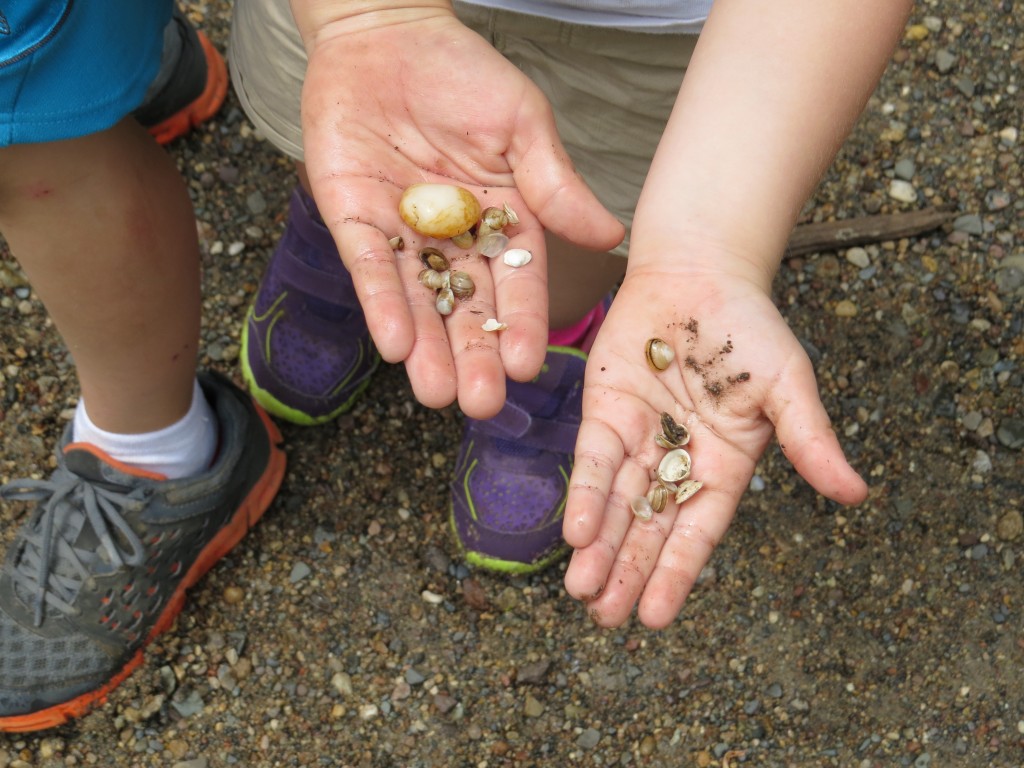 No Titmice and a handful of shells.  At least some of us were happy with this place.  I did see two male Indigo Buntings, a much more colorful bird than the drab Tufted Titmouse. Ironically, because of its commonality, it is a lot more boring than a Titmouse. 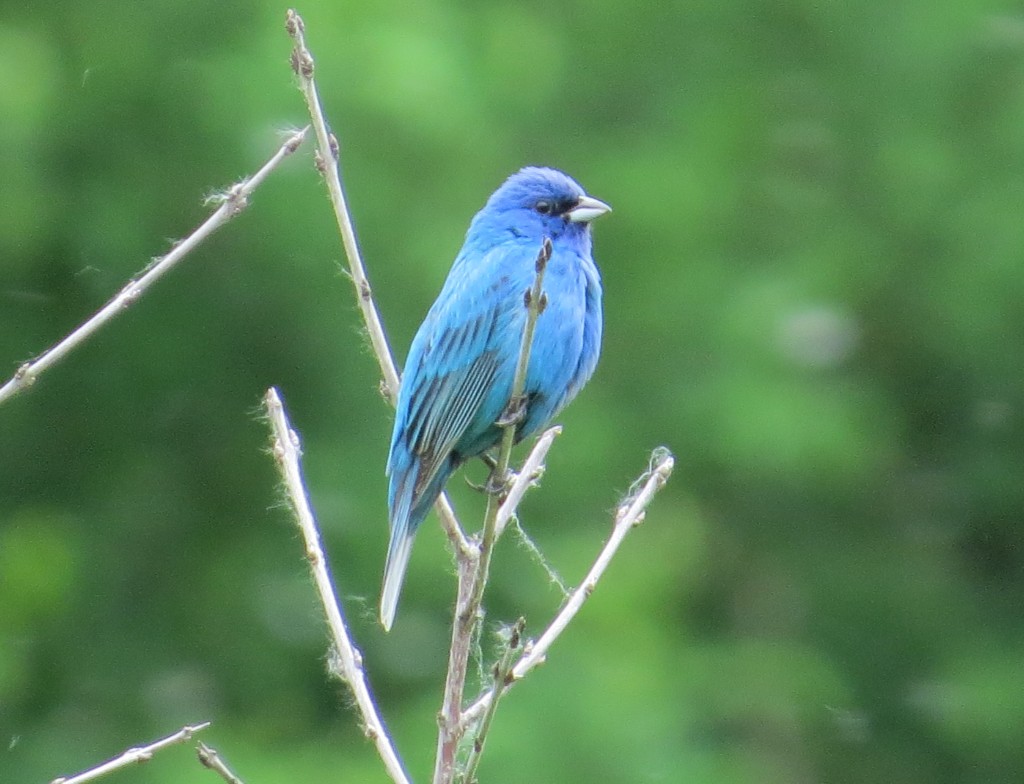 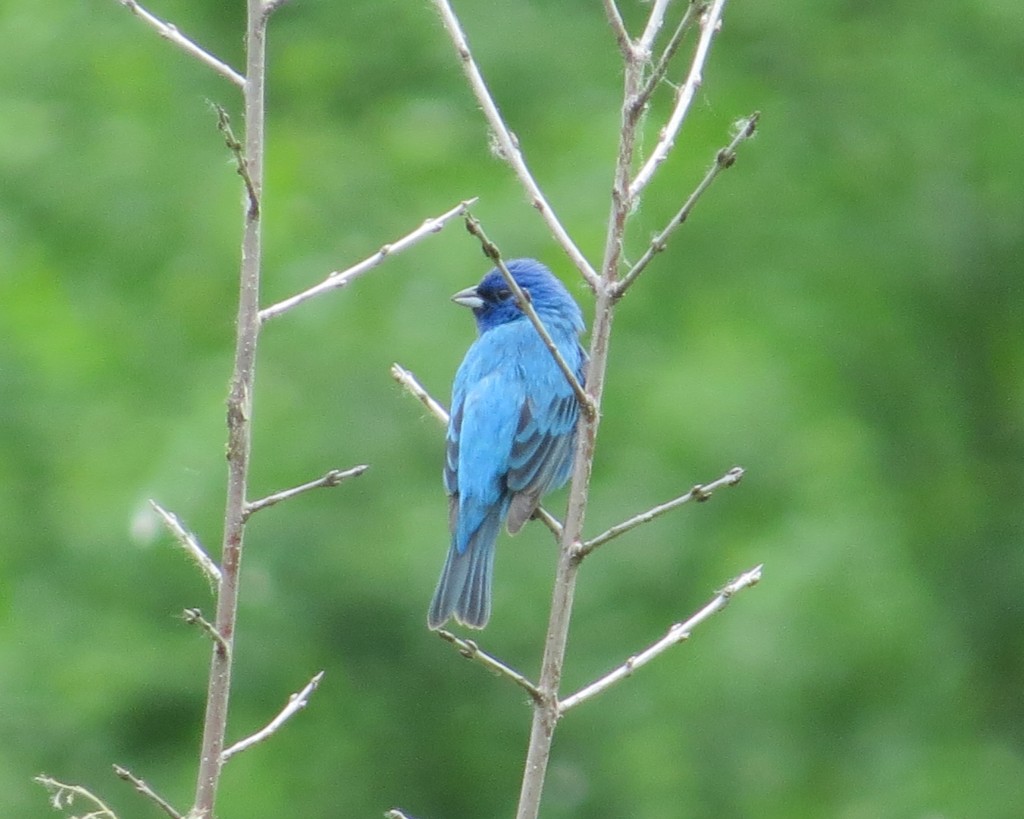 We gave up on the Tufted Titmice and made one quick stop at Murphy-Hanrehan Park for another reported Hooded Warbler.  The walk was short, and so was the birding.  This Hooded Warbler wasn’t singing or showing either.  I guess I can’t complain.  Four life birds and some other cool wildlife sightings made for a memorable trip.  Plus, we still have a warbler to hunt (the list hasn’t gotten quite short!).

8 thoughts on “Avian and Animal Adventures at Afton State Park”