This past weekend was an action-packed weekend full of visiting family.  Not only was Mother’s Day part of the mix, but Marin had her first ever dance recital.  Both sets of grandparents each made the 265 mile one-way trip to see first-hand the results of “hard-work” and hundreds of dollars on dance lessons.  Surely the two-minute performance by a bunch of 3 and 4 year-olds would live up to the hype.

On Friday night we went to Marin’s recital.  I knew there would be other ages dancing, but my jaw dropped when I looked at the program and saw a whopping 47 dance numbers, including a couple numbers by a womens’ group of 30-60 year-olds.  (You read that right.)  And no, we could not bolt after Marin’s class was done.  It seems the higher-ups in recital planning have caught on to this dirty secret of parents and strategically scheduled one of Marin’s dance numbers near the beginning, one in the middle, and then included the little dancers in the finale with everyone else.

Right now the warbler migration is picking up some steam (warblers!) and we even have daylight until 9:00, and here I was settling in for not one, but two nights of dance.  I asked Melissa how long the program would take.  My sunken heart hit the floor when she said it would be 2+ hours – each night.  Now my concern was no longer birding; it was survival. Sure I was excited to see Marin in her cute outfit trying to make her limbs do something that resembled dance, but 2+ hours! Melissa told me the secret to get through this was to find the dancers that were fun to watch – the ones with the infectious smile or the ones who never smiled – the ones who could move really well or the awkward ones you rooted for just to not crash and burn.  Suddenly I had an epiphany: this was just like birding! You pick out the bird that’s fun to watch and ignore the rest.  With this newfound connection and positive outlook, I was ready to watch some dance.

I’m not here to report on the recital, but I did survive, even the adult dancers’ group. Having been held back from a strong day of warbler migration and lingering shorebirds, I was out the door at first light on Saturday morning to get in on some of the action. Chasing the rare birds is fun, but currently there’s no other place I’d rather be than right near home with nearly two dozen warbler species dropping out of the sky.  I couldn’t wait to watch these little dancers spazzing around much like a bunch of 3 and 4 year-olds on a dance stage.  But really, I was after anything that was fascinating to watch, even the awkward ones. 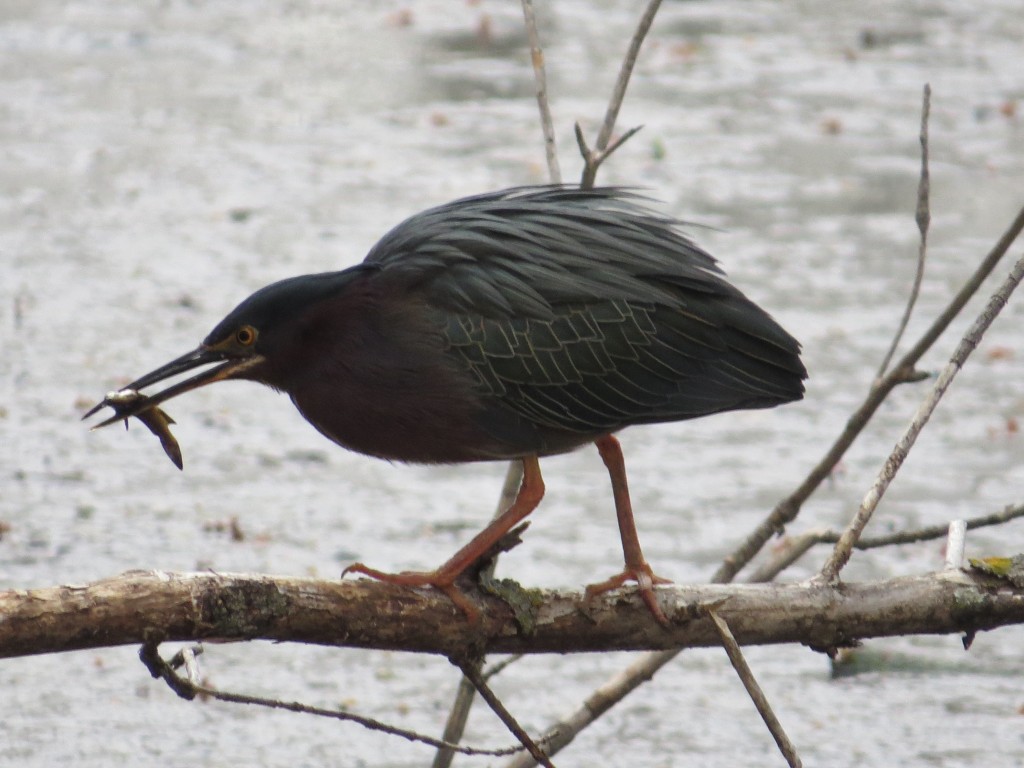 One of the awkward ones – the Green Heron 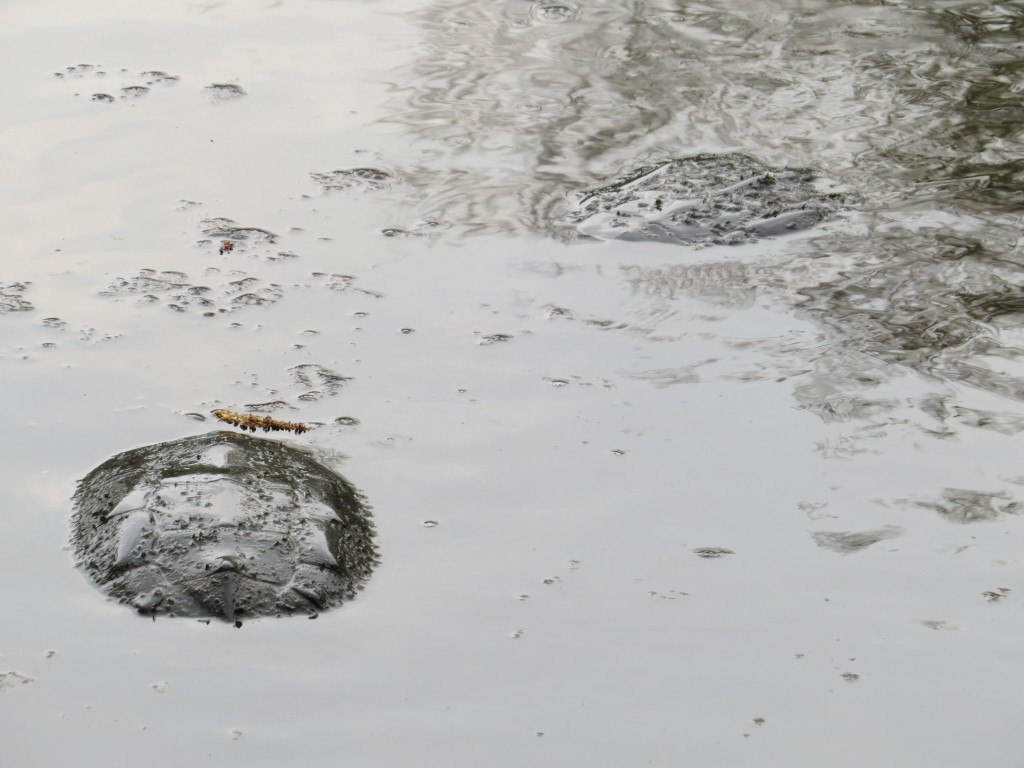 “Lovebird” Snapping Turtles – not birds, but most definitely an awkward encounter

Some of the many dancing warblers that aren’t as much fun to watch include the abundant Yellow-rumped Warblers, the extremely dull Orange-crowned Warblers, and the sort-of-bland-sort-of-colorful Nashville Warblers.  I did find one dancer on which to focus my attention, the stunning Magnolia Warbler.  As my picture shows, I was reminded of just how dificult these ADHD birds are to photograph. 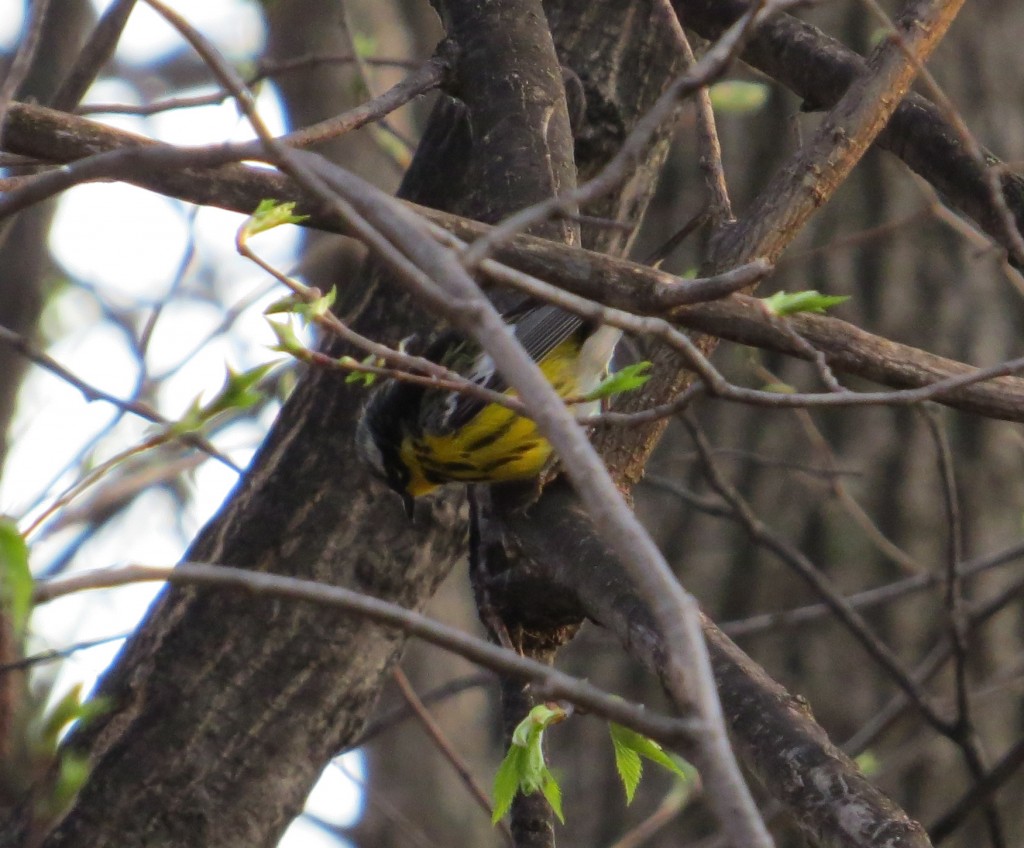 Another one of the birds I spent a great deal of time focusing on was a real key find for our area.  The Cape May Warbler is not a common migrant, proven all the more by 300-club member Joel who has never seen one before this past week.  But Joel did find one, and remarkably this male was with a female and they have been hanging on for nearly a week, visiting the same tree.  This was only my second experience with a Cape May, and both times I have been surprised by how mellow they are by warbler standards.  They generally don’t move a whole lot.  It was fun to watch the pair interact with each other.  That said, I focused mostly on photographing the male. 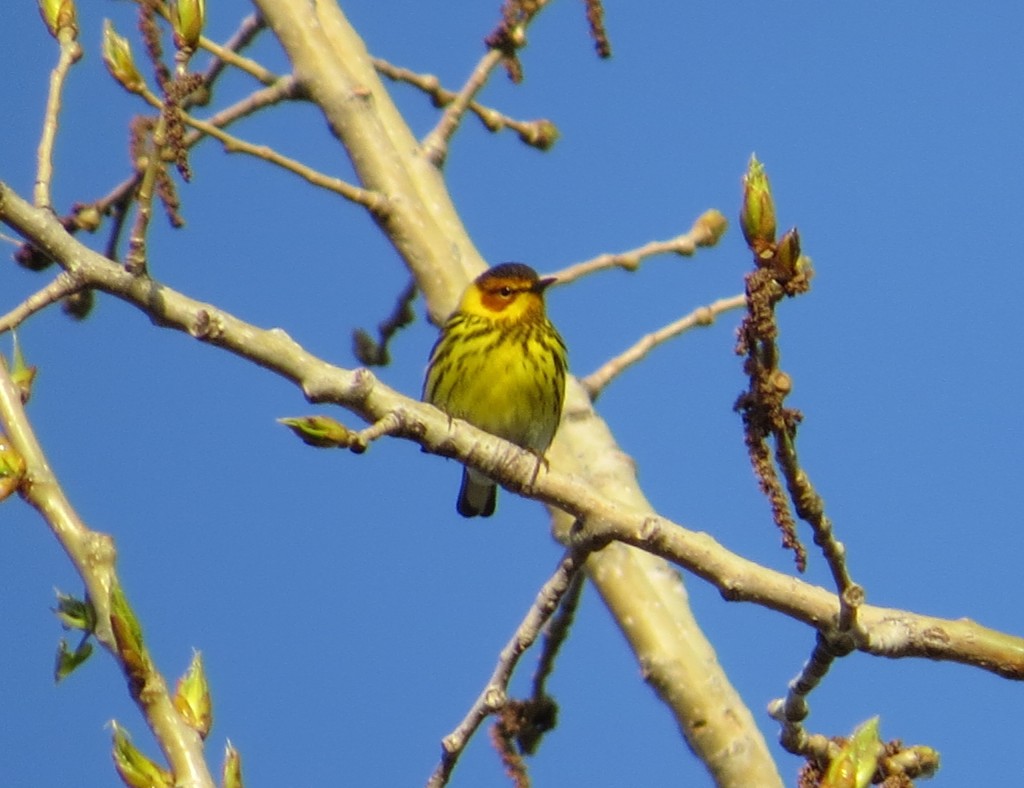 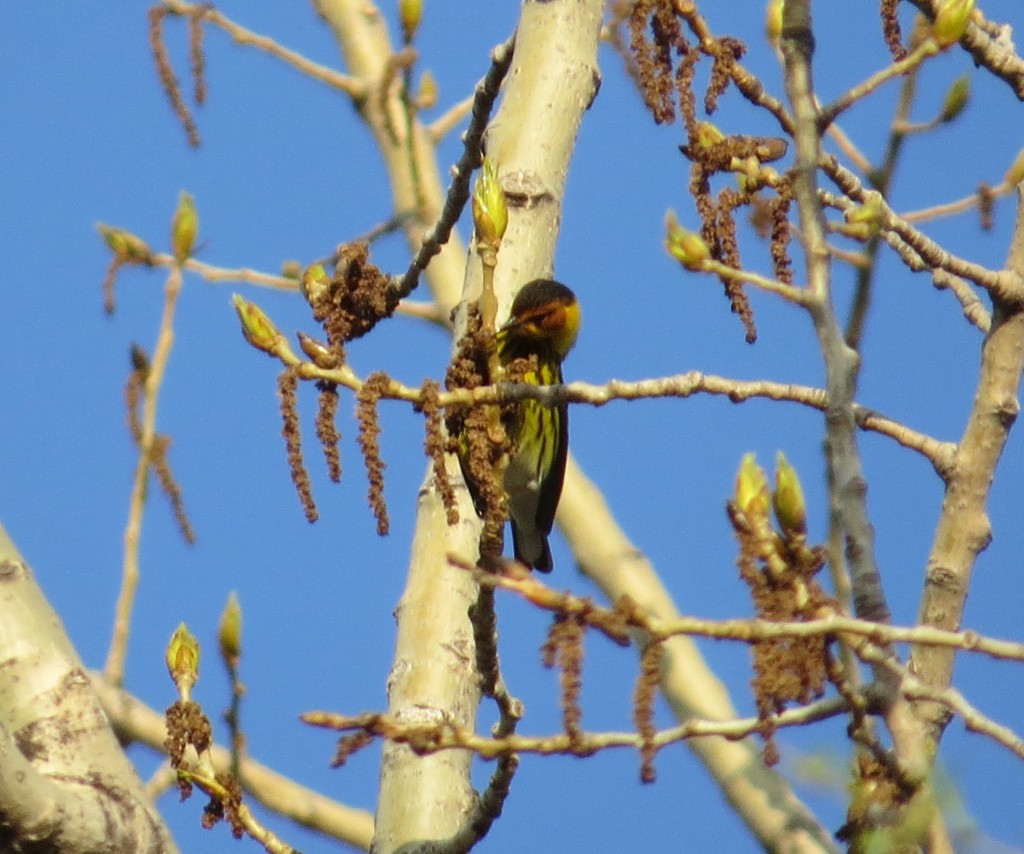 Classic Cape May pose – craning the neck to get some chow 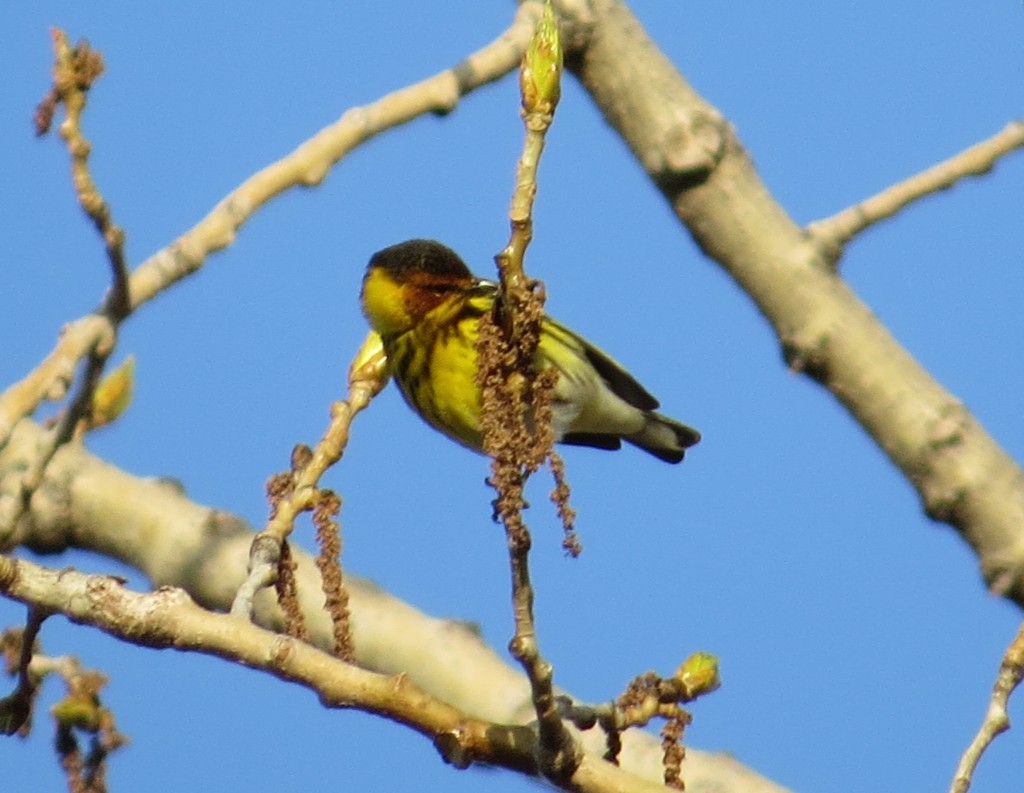 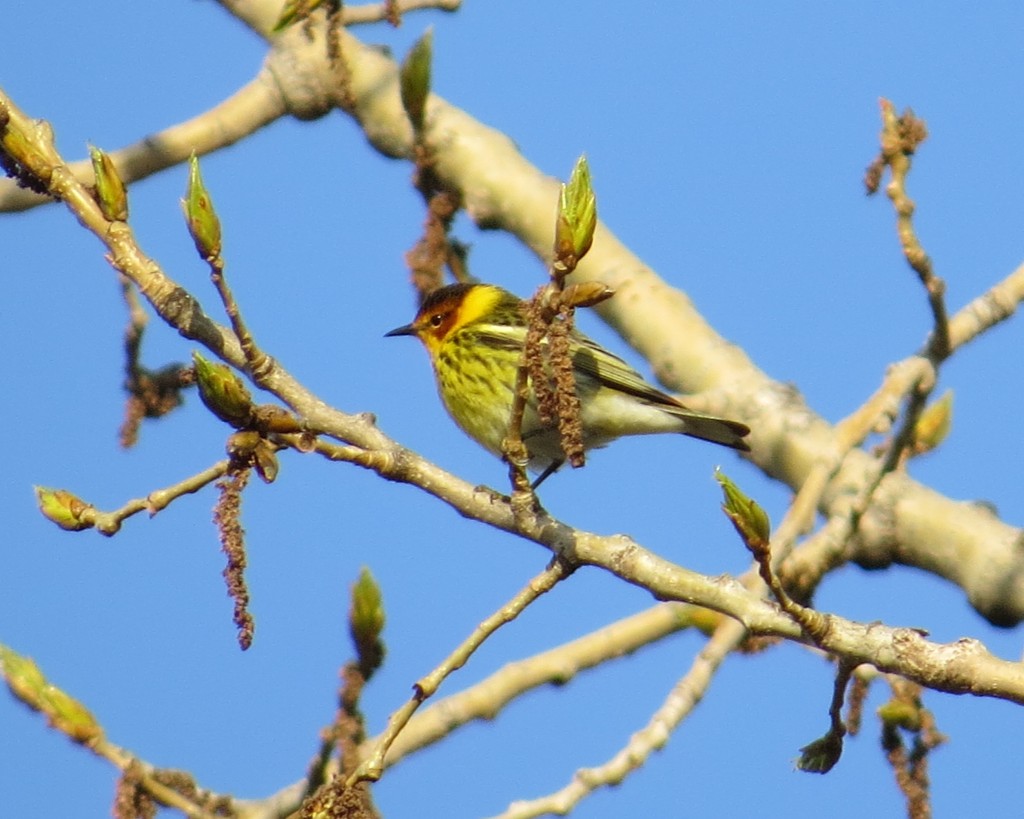 A Cape May is a darn nice bird and after getting some shots I was pleased with, I was feeling everything would be okay again even with round 2 of the recital on the horizon.

Another bird that my dad and I spent our time watching and tracking later in the day was the Red-headed Woodpecker!  This is now the third time I have found one, and it is never any less thrilling than the first time.  This species is quite stunning and on the decline.  It is always a delight to see one. 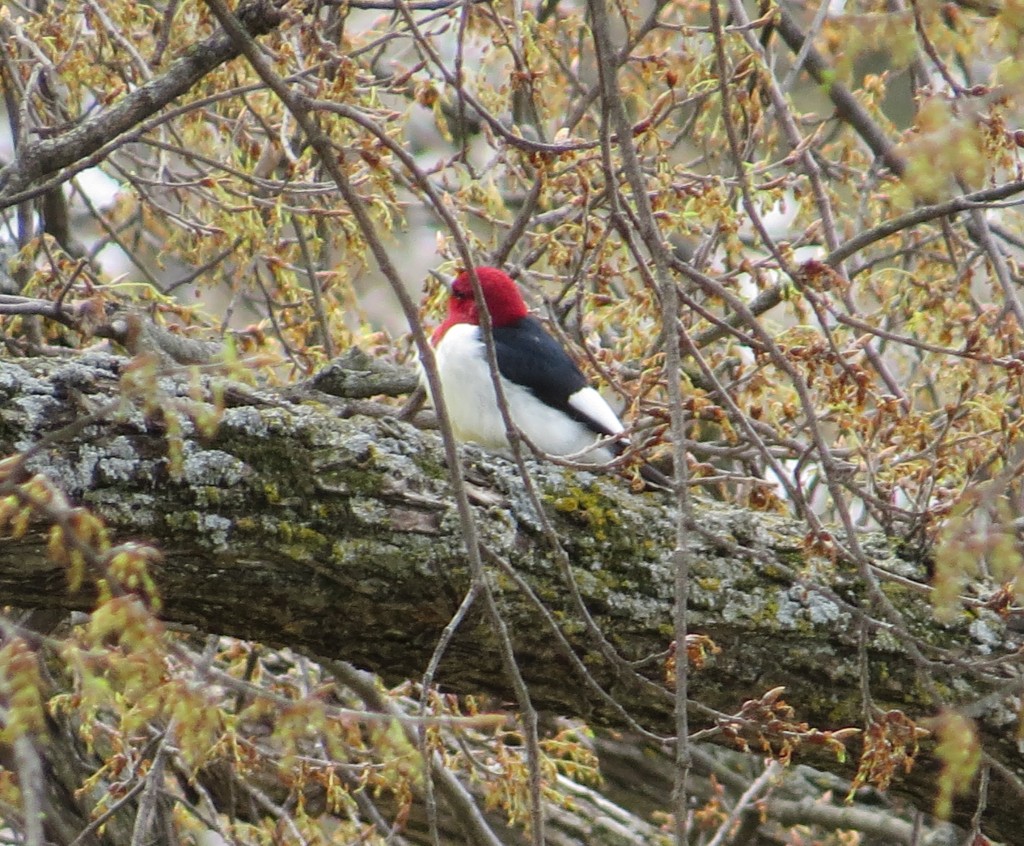 On one of my outings this weekend, one bird that grabbed and held my attention was the Golden-winged Warbler!  This is one of my favorites and only the third time I’ve seen one.  Now I was getting stellar looks at this bird  in the beautiful morning light from 6 feet away as it foraged on the ground in the weeds.  The views were spectacular but the photography proved quite challenging as it never really came in the open. 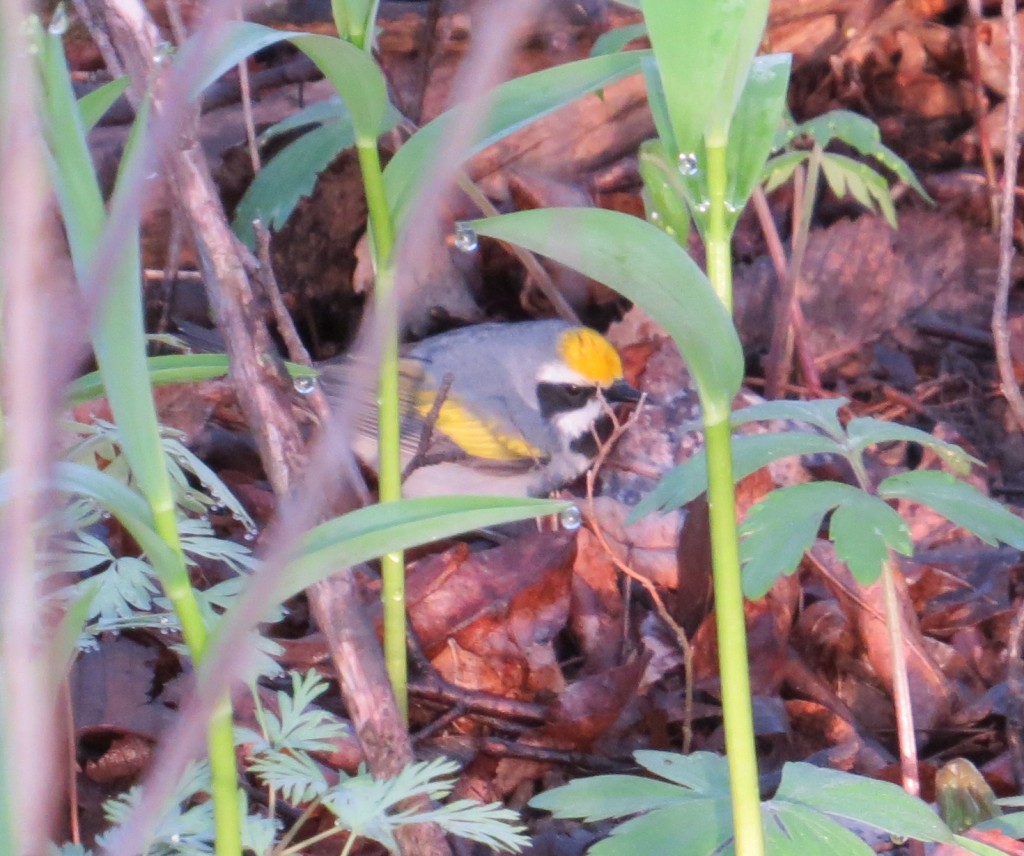 With a good amount of imagination, I think you can see just how good of a picture this next one might have been.  It definitely captures the essence of this bird, which is good enough and worthy of being posted.  I love this bird.  I can’t wait to go on the hunt for it when it’s on territory in northern Minnesota this summer. 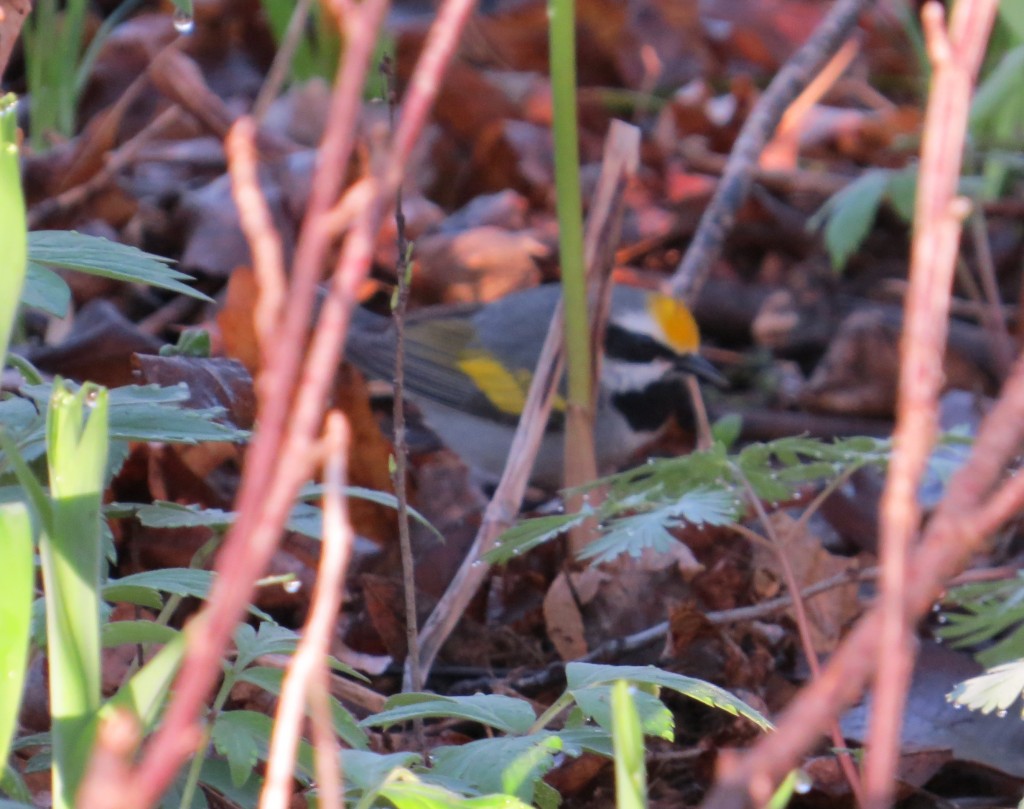 According to the Minnesota Conservation Volunteer, Minnesota has only 10% of the GWWA’s breeding habitat but over 40% of the breeding population!

Some dancers are so well-costumed that their outfits are striking and demand your attention, like this appropriately named Black-and-White Warbler. 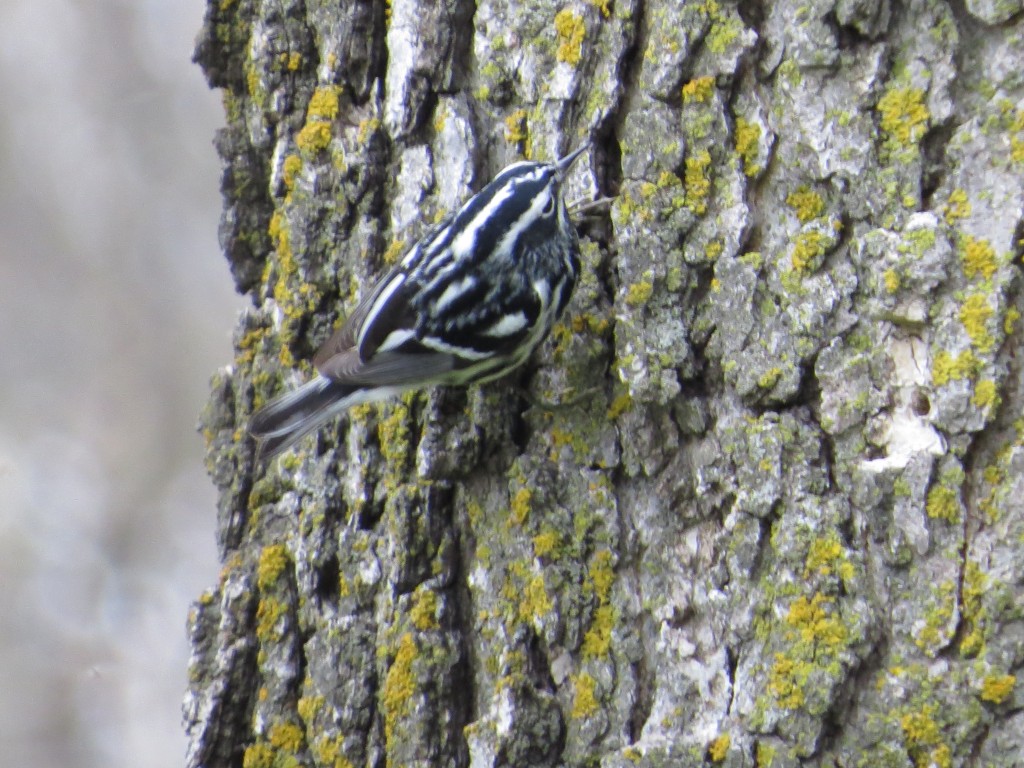 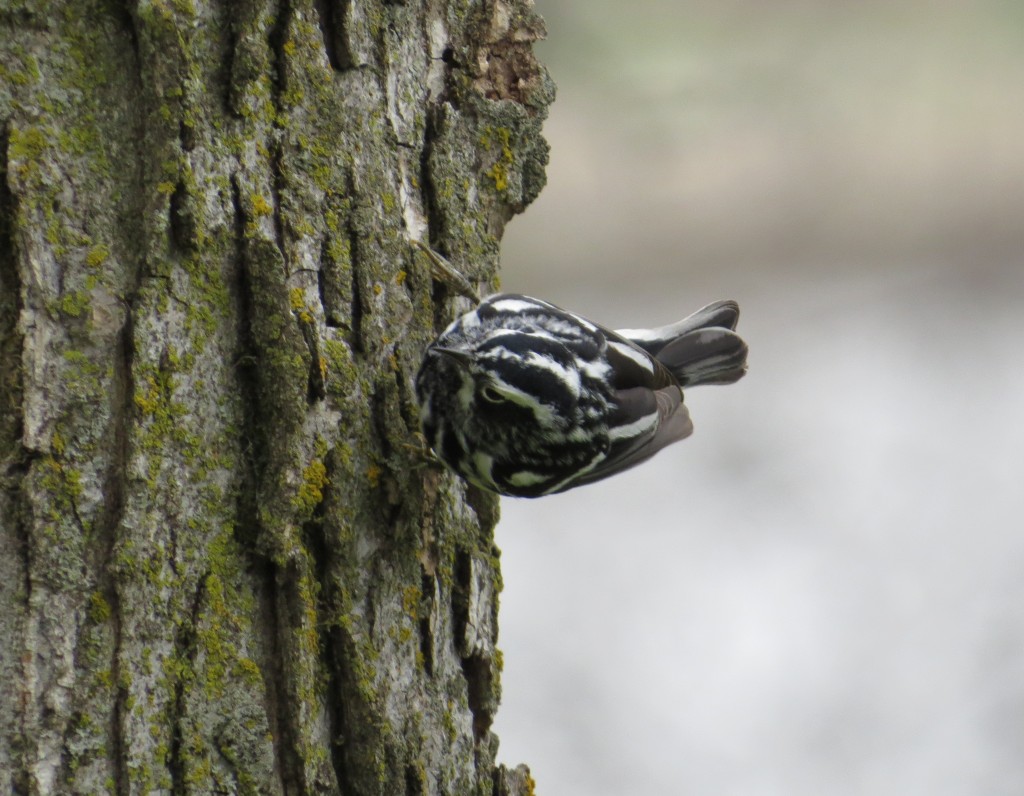 Sometimes the most unassuming dancers can hold your attention, like this Lincoln’s Sparrow.  It is no warbler, but it is arguably one of the best sparrows. 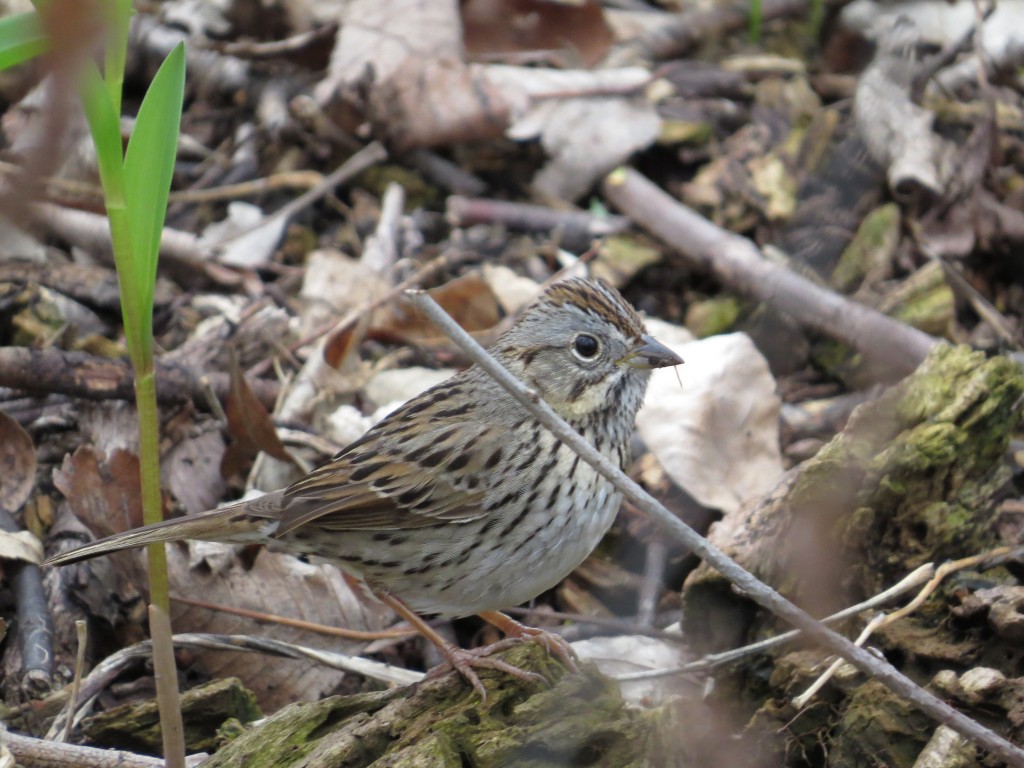 But from time-to-time, one needs to watch the other things on the dance floor even if those things aren’t the most interesting things that are out there. 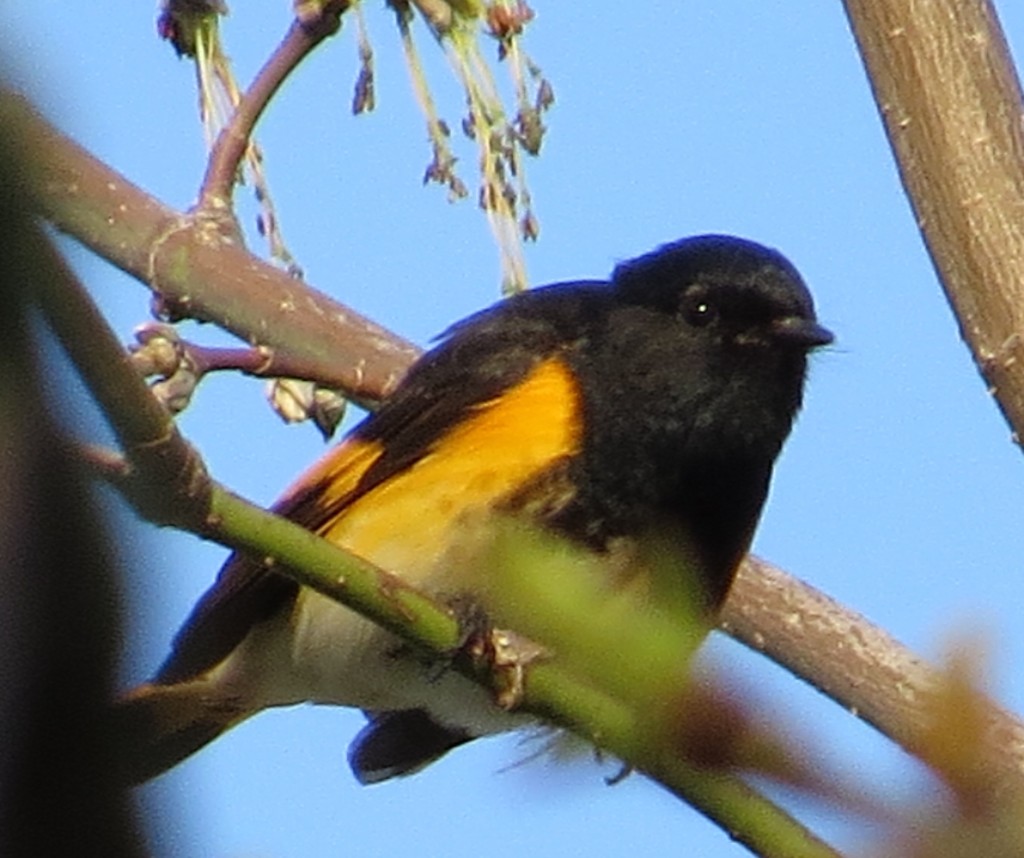 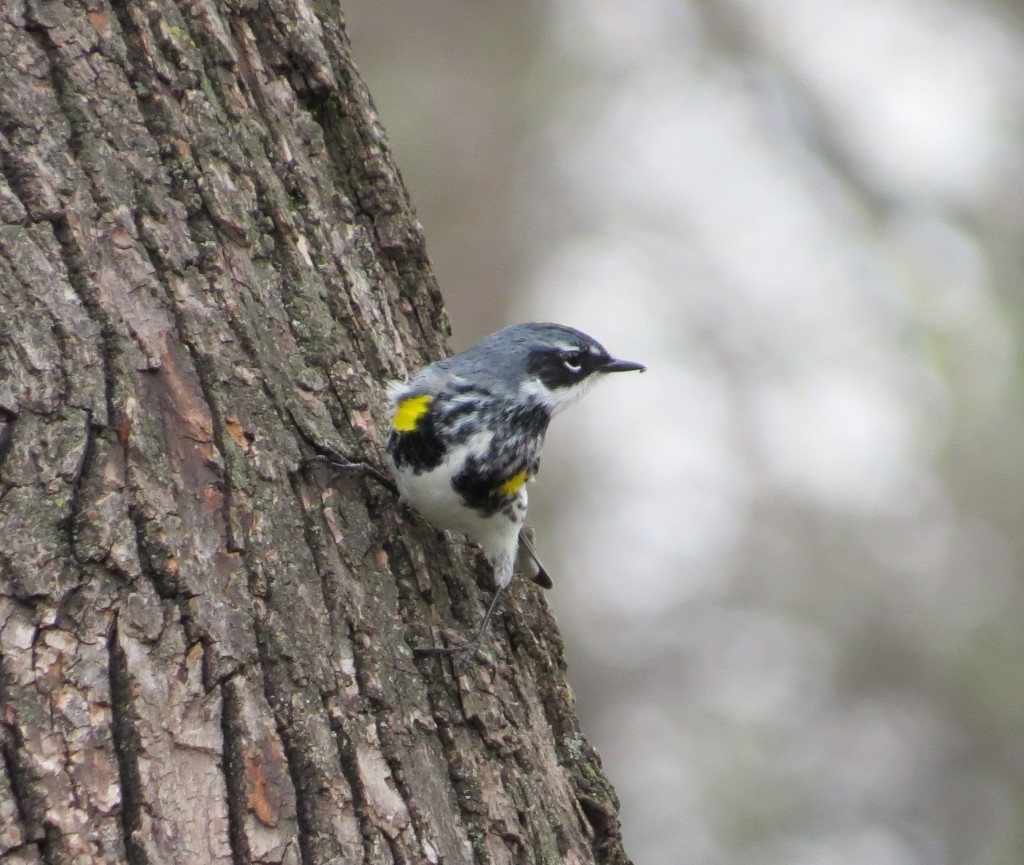 It was a great weekend of dance and birding.  Picking out the fun ones ensured that the time was well spent. 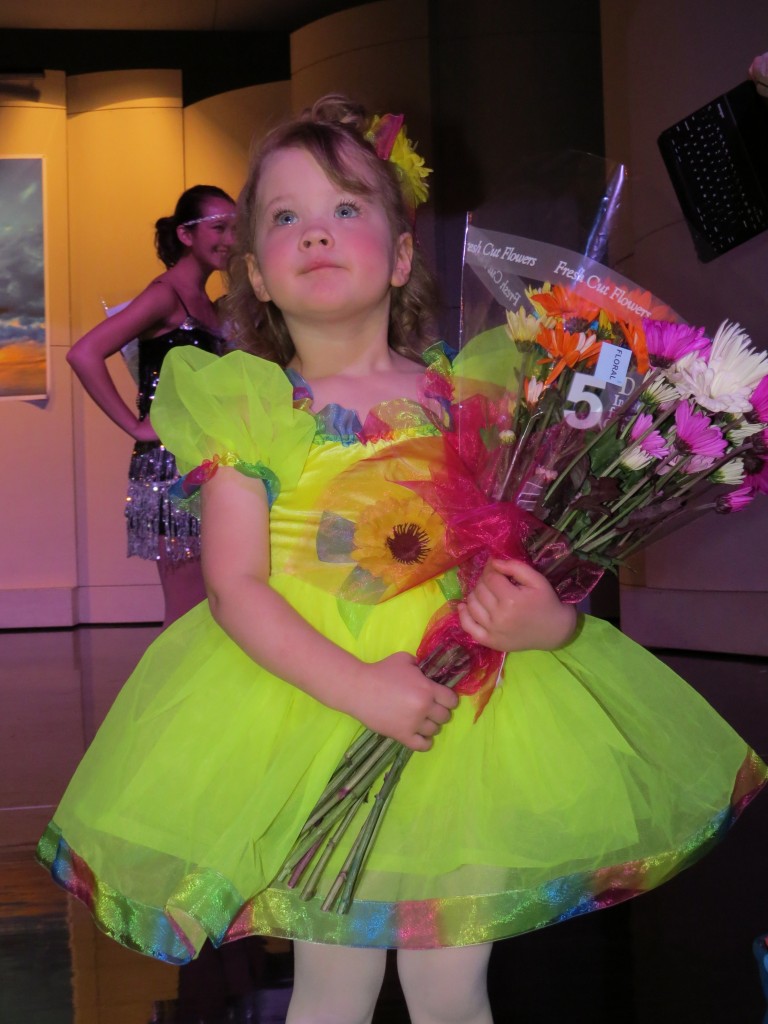 One of the fun ones.