I woke up this morning to an unexpected text message – school was delayed two hours due to heavy fog. Sweet. The extra time allowed for a little more sleep and the chance for me to drop Evan off at his school which was on time today. Doing that allows Evan to get about an hour of extra sleep.

After dropping him off I had gotten no more than a mile away when I got a text from my coworker, Mike, that read “Just spotted a snowy white owl by Litchfield.” Whoa! This has been a major target bird and one that I’ve eagerly awaited during this winter season. We missed on them in Duluth last March, and our latest trip up north did not yield one either. I’ve been carefully monitoring reports of these owls as they have slowly been popping up around the state.  In fact, in the northeastern part of the country, Snowy Owls have been invading the coast and have reached as far south as North Carolina and Bermuda! In normal years it is not too common to find them as far south as our area.

Needless to say, I was very excited about this news.  But immediately I was hit with a dilemma.  Do I go back to Evan’s school and yank him out of class? Do I risk being late to work over this? Do I try to see if they’ll find me a substitute teacher?  Ultimately I decided that there was no guarantee that even I’d see this bird.  Pulling Evan out of school abruptly and me getting time off on such short notice were bordering on impossibility.

I decided to leave him at school.  As it was I had a small cushion of time before I had to be to work – just enough time to drop Marin off at daycare and go check out this location.  On the way to the site, I stopped by the house to grab my camera. I double and triple checked that the battery and SD card were loaded and then I was off.

After dropping off Marin, I pulled up to the front doors of my school where Mike was waiting to go with me to show me where the bird was.  I hopped out of the driver’s door and had Mike take my place so I could be ready to spot and photograph.

The fog was still extremely dense with a freezing mist, so we could only travel about 45 MPH. We got to the area where he had first seen the bird perched in the ditch and then where he saw it perched on a power pole after he turned around to get a better look.  We scanned every pole and looked in every field. Nothing.  If it were in a field, it would have stuck out like a sore thumb since we have no snow. We went past the area he had seen it and turned around to head back to school.  It was looking like I had missed the owl.

Though I was a little disheartened, I continued to scan every pole and field carefully on our return trip. At one point Mike pointed to a power pole with a large cowboy silhouette leaning against it and said that he saw the owl in the vicinity of the pole. I looked at the pole and gazed up. And there was the Snowy Owl! We had completely missed it the first pass!  It was no wonder we didn’t see it as this nearly all-white bird blended into the very white sky in the dense fog.

Luckily the this pole was right by someone’s driveway, so we were able to pull over and observe and photograph it for a few minutes. Had we seen it anywhere else, we would have been risking our lives to view it since this busy road had no shoulders and was clouded in fog. It wasn’t a good day for photography, but it was a treat to even attempt to take a picture of this bird! 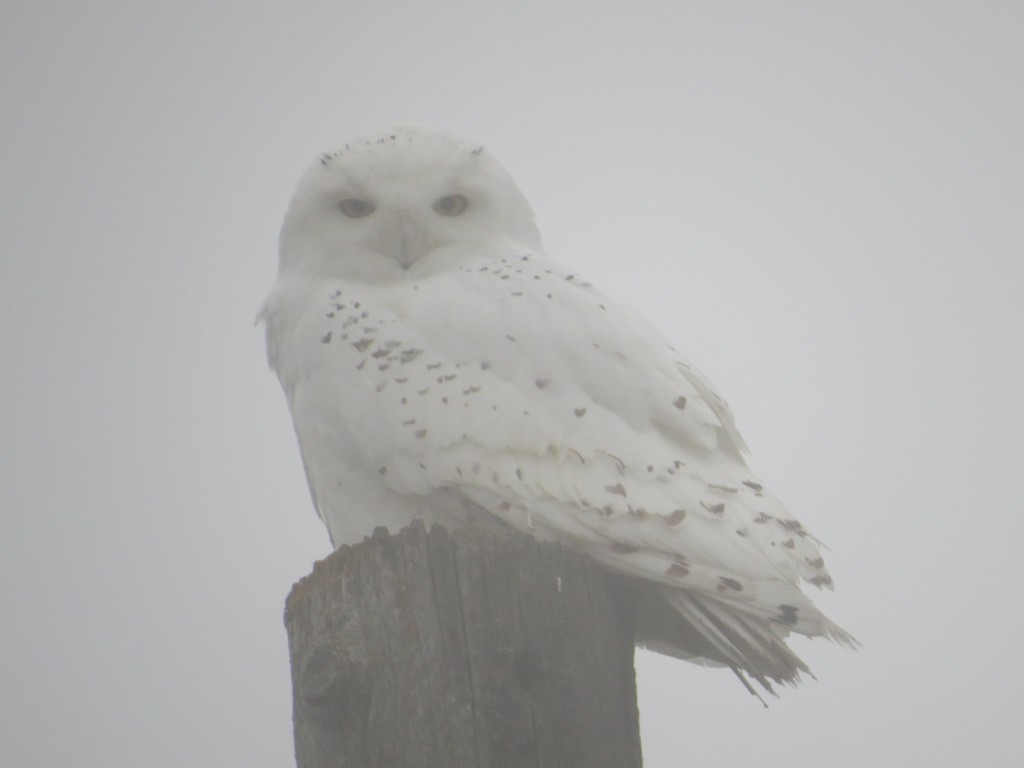 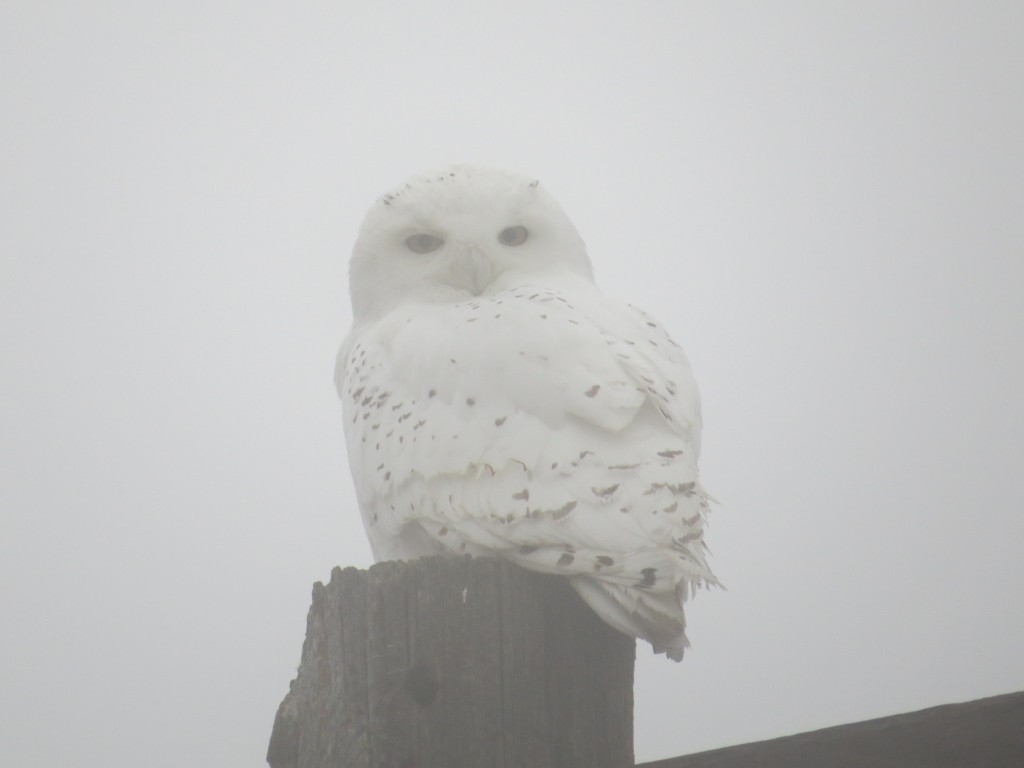 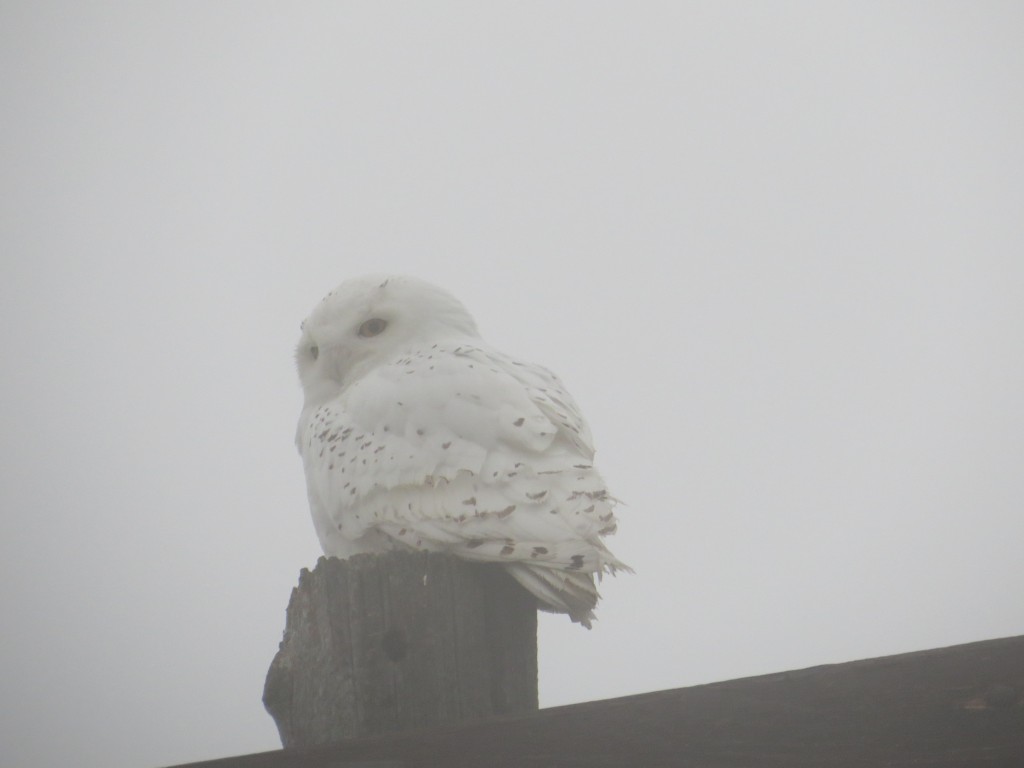 Can you see how we almost missed this owl hiding in plain sight?  Because this Snowy Owl is almost completely white with very faint barring, it is an older male.  The young ones and the females can have heavy black barring all over their bodies.

Mike and I made it to work on time with ten minutes to spare.  Immediately I went to work posting the location of this owl on MOU-net because Snowy Owls are a big deal and lots of people want to see them.  I think only a half dozen or so have been reported so far this winter in Minnesota.

I spent the rest of my day trying to focus on my job while scheming a way to go get Evan to run out and see this bird.  Nothing I could think of was working. Finally I asked Melissa if she could run him over to Grove City after school, and we could take a quick look before dark.  She hustled him over as soon as she could.  There was a sense of urgency to have him see it today because this all-white bird would most definitely be impossible to find after the blizzard that is headed our way tonight.  Plus, birds have wings and can take off whenever they please.  There’s never a guarantee one will be around.

We drove back to the site and could not relocate the owl. There was a car waiting at the location, so I got out to visit with them.  They had come all the way from Minneapolis and hadn’t seen it either.  I felt bad for them, but that’s the risk we chasers take.

It was a bummer that Evan wasn’t able to share in this excitement today. But, to Evan’s credit, he was pretty upbeat about it, especially when I told him that we’d chase the next close one and that this year was shaping up to be an invasion year for Snowy Owls.  I told him he has a lot of years to see one. Still, having him not see it took a little bit of the excitement out of this incredible find.