Spring migration has been long gone.  Summer specialties that put us on the road have dried up.  To make the final push for 200, we knew we’d have to grind it out, bird by bird.  That means one thing – going after LBBs (little brown birds) in our own part of the state that we still have never seen.  It was time to make something happen.  To get a good birding fix we had no choice but to go after our missing LBBs.  And that’s what the kids and I did today while their mother was on a shopping trip to the Cities.

We started by going to a Waterfowl Production Area to look for shorebirds.  We saw some, but nothing was close and we couldn’t make out positive IDs.  So we moved on to the location of an Upland Sandpiper, a bird Evan still needed.  We struck out there, too.  As we traveled down dusty roads, though, I drove slow with the windows open, listening for a new bird.  Things sure are quiet out there now as most birds are no longer singing as they are either taking care of young or beginning to head south already.  Then I heard a song that made me hit the brakes.  It sounded like a wren we still needed, either the Sedge Wren or Marsh Wren.  I played the Sedge Wren song on the iPod – it was a spot-on match for what we were hearing.

Now the trick was to see the bugger.  It was in a short grass meadow between two cattail marshes, exactly the type of habitat the field guide described.  Joel told me that in order to see one, I should walk in the direction of the sound.  He said a bird on territory will get agitated and present itself.  There was a problem, though.  I had two curious farmers watching my every move from down the road.  I wasn’t about to step onto private land. Finally I gave up, and we moved along.  It was frustrating to know a life bird was singing right next to us, but we couldn’t see it.

Since we were near the location where I discovered a Red-headed Woodpecker a couple weeks ago, I decided to swing by to see if we could see it again.  They are incredible birds. Instantly we saw it.  And then another. And another.  There was one, maybe two families of these woodpeckers.  This was great news! These birds are in decline, so it was thrilling to find multiple adults and juveniles with them. 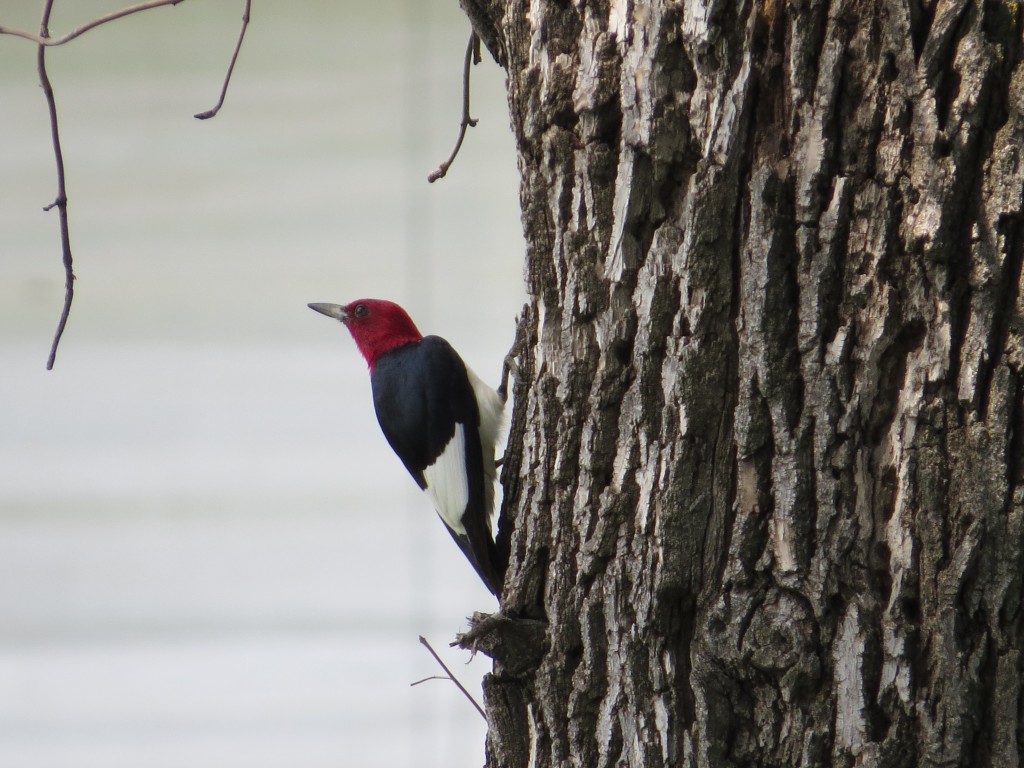 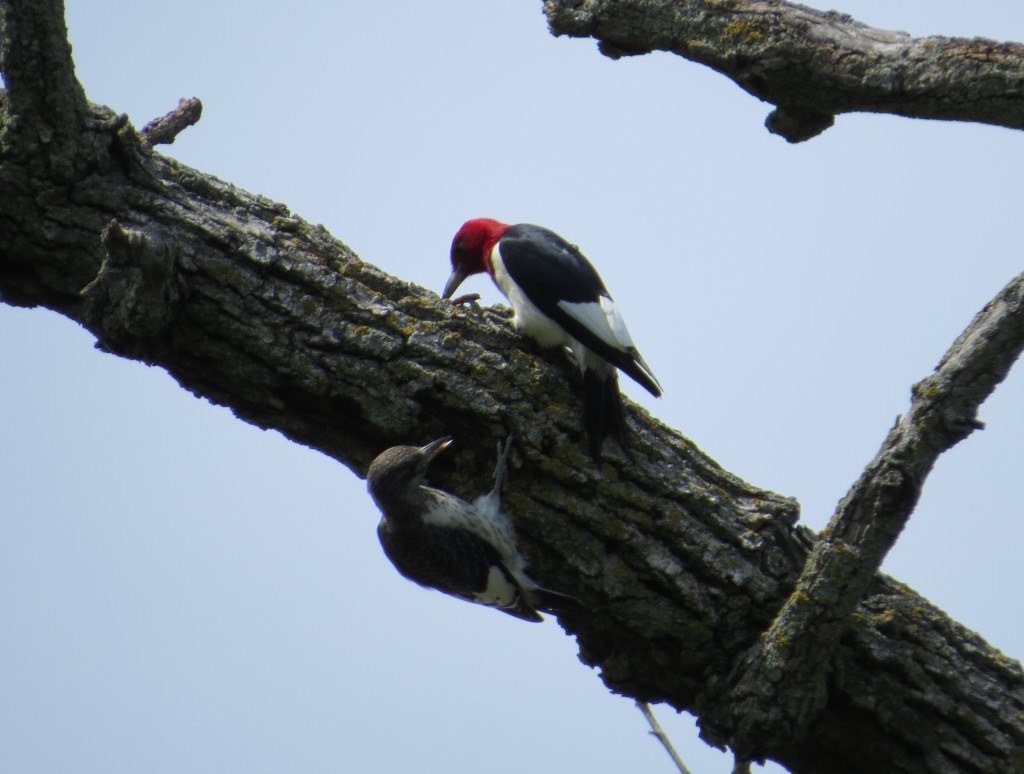 The kids entertained themselves in the car by drawing and coloring.  Here is Evan’s rendition of the woodpecker that he drew while I took pictures. 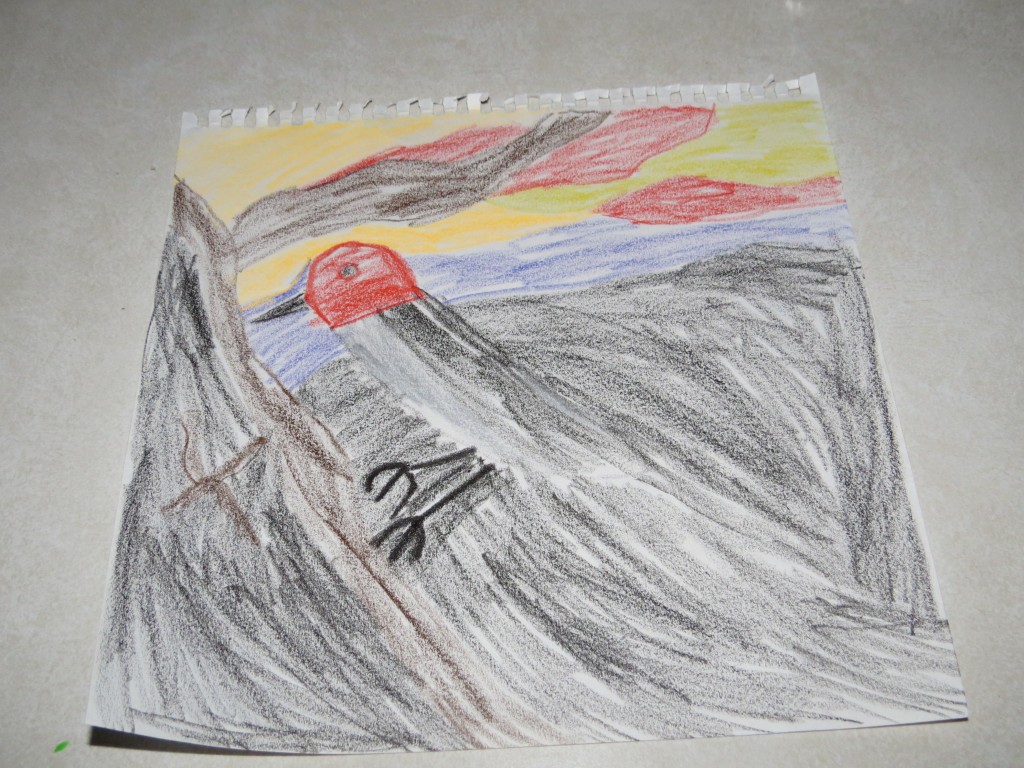 After getting our fill of the Red-headed Woodpeckers (which is tough to do!), we went back to the Sedge Wren spot.  No farmers watching us this time.  I still didn’t want to trespass, though.  I decided to play the bird’s song on my phone.  Instantly the little brown bird we were after came buzzing up to the road to investigate.  Evan hopped out of the van to get a good look for himself. 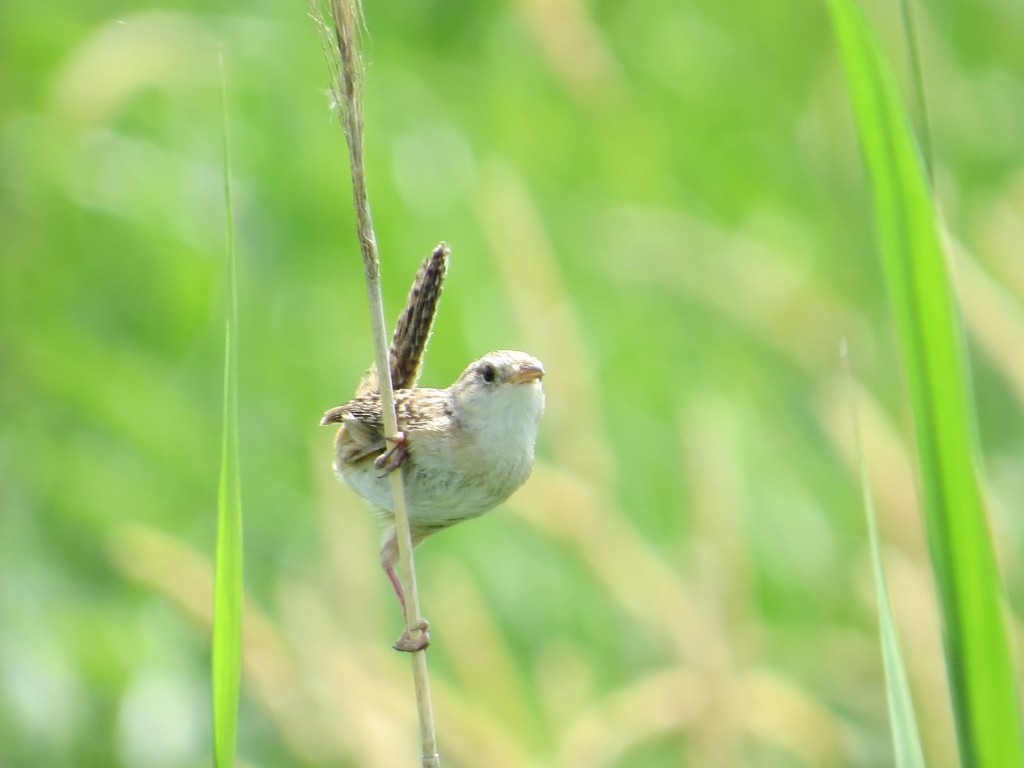 Not to be outdone on his own turf, he started singing back to us. 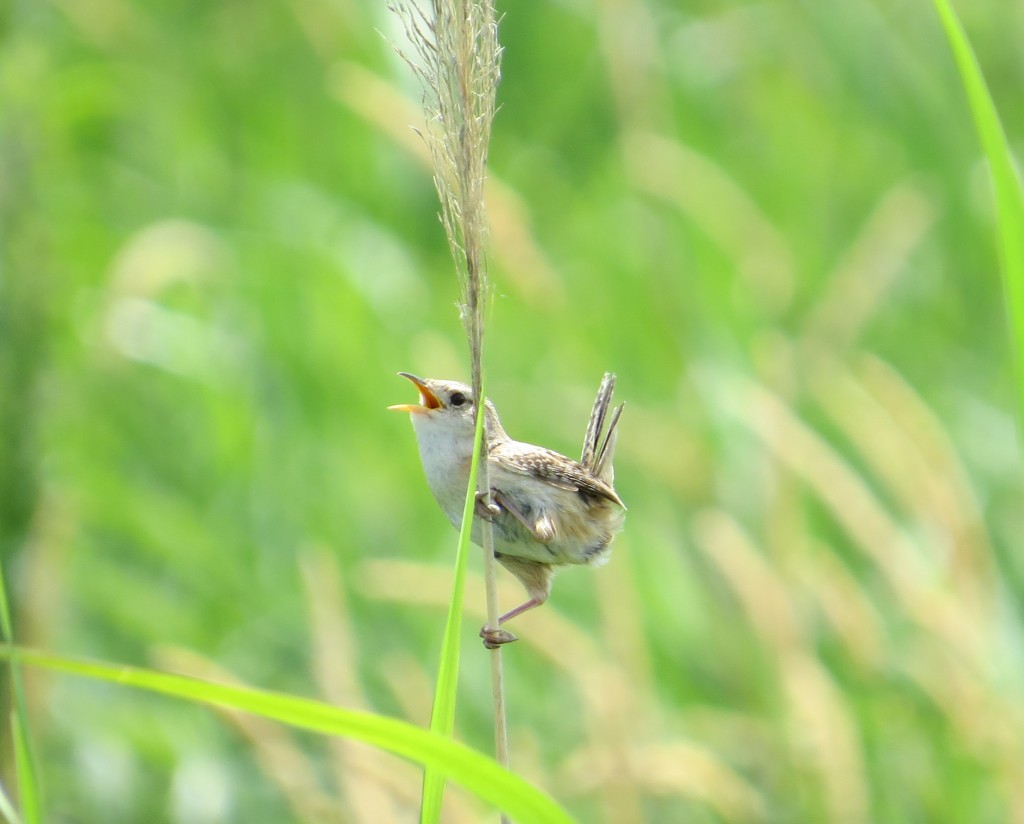 Then he was like, “Wait a minute, something isn’t right.” 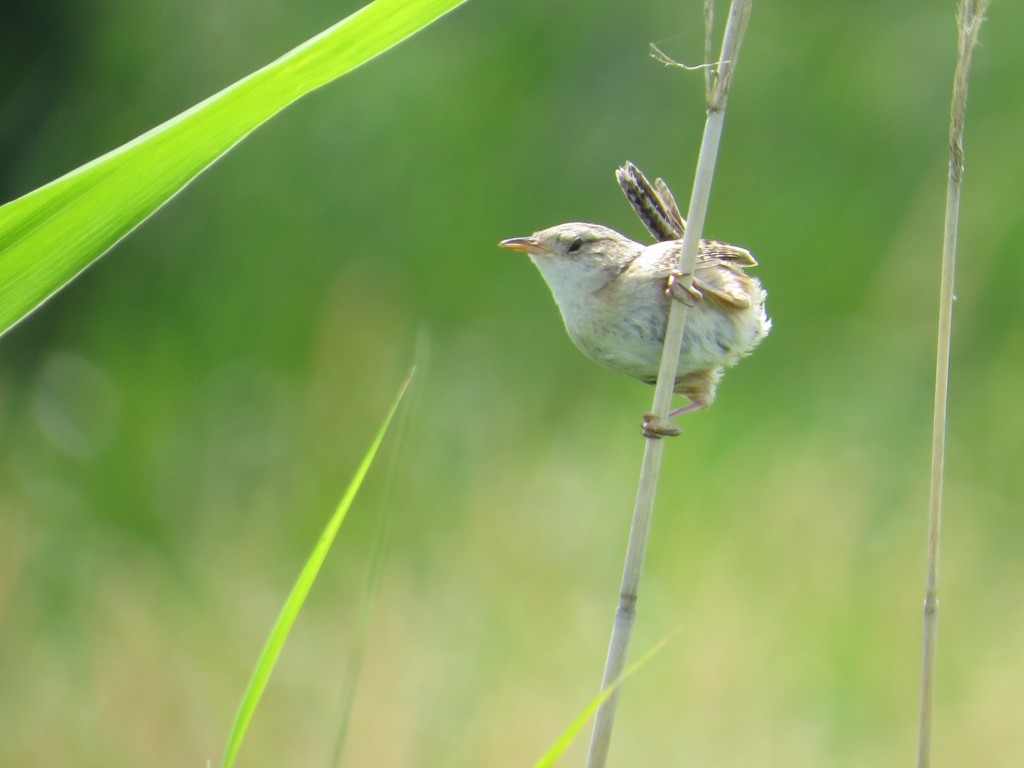 Then he showed us the “moon.” 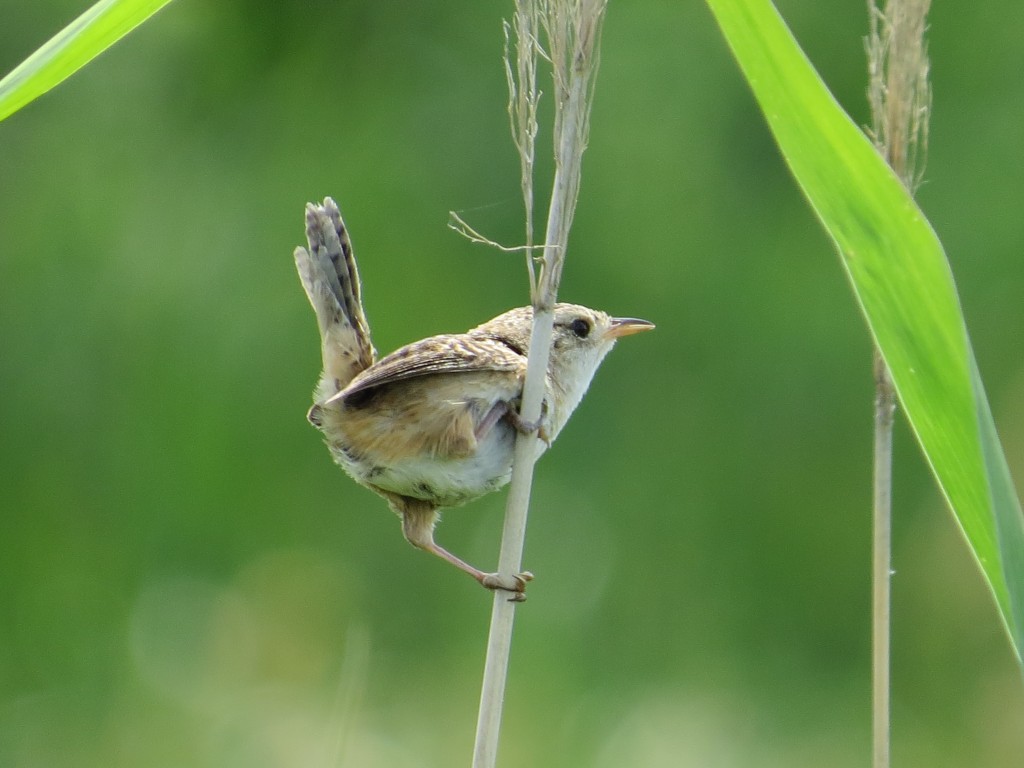 Back into the short grass.  Can you find him? 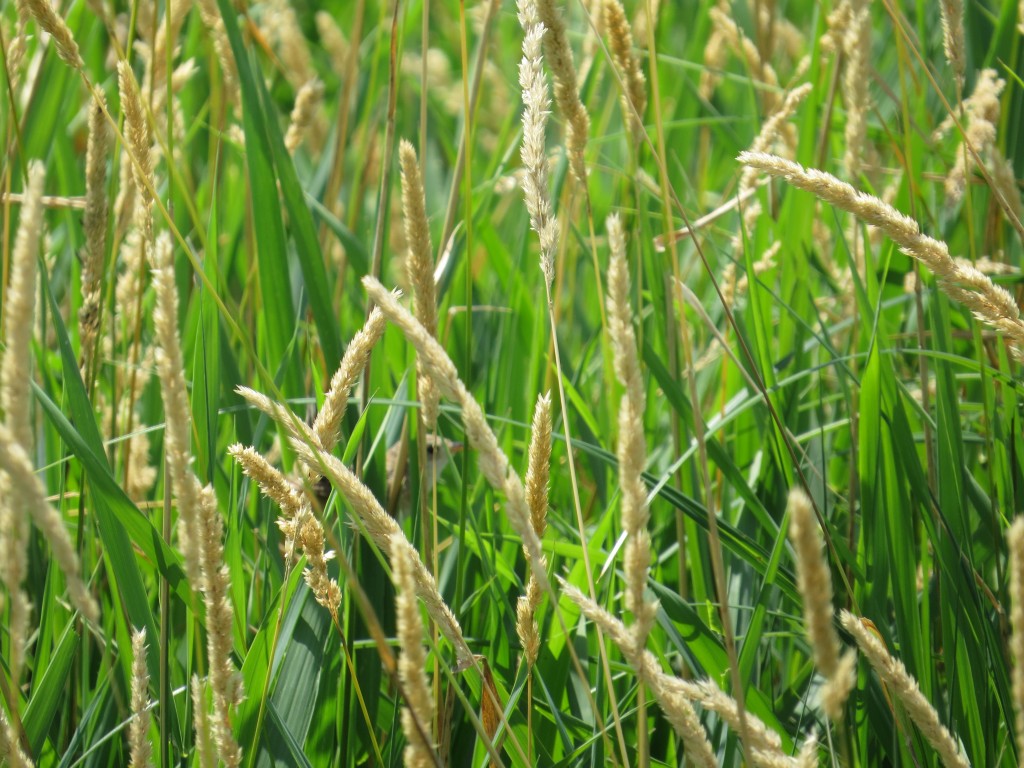 As fun as it was to get this life bird, it was time to leave.  The kids were anxious for some promised ice cream in town.  After the ice cream and some errands, we were back at home.  I was sorting through my most recent pictures when I got an email from Randy. He wanted to take us out birding tonight!  You don’t say no when Randy offers.  We already had a good day getting a lifer.  Now we were about to go out with the local expert.  Even Evan knew this was a special outing, so he put on all his birding gear: hat, vest, binoculars, khaki pants, and hiking boots.  Randy asked us what our targets were.  One was the Marsh Wren.  So that’s what we went after first.  We also looked for shorebirds as fall migration has started already if you can believe that. 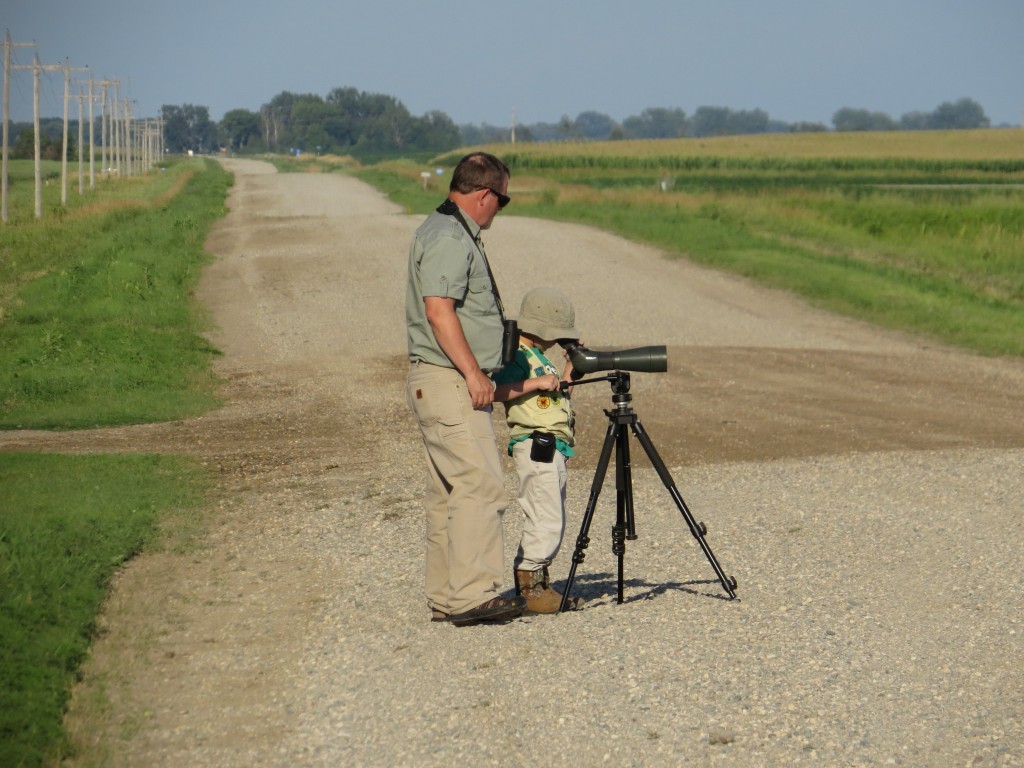 The Marsh Wren was not showing at any of the large cattail marshes we stopped by.  Randy had said it’s an easy bird to hear and see.  It was dead calm everywhere.  Not a one could be heard.  Nothing came to the playback of the song on my phone.  Bizarre.  Maybe it was too late in the season for them to care about another singing wren and defend their territory.  We maybe saw one flit here or there, but we made no positive ID.

Finally, though, Randy spotted one that wasn’t singing.  It was only chipping in the cattails. 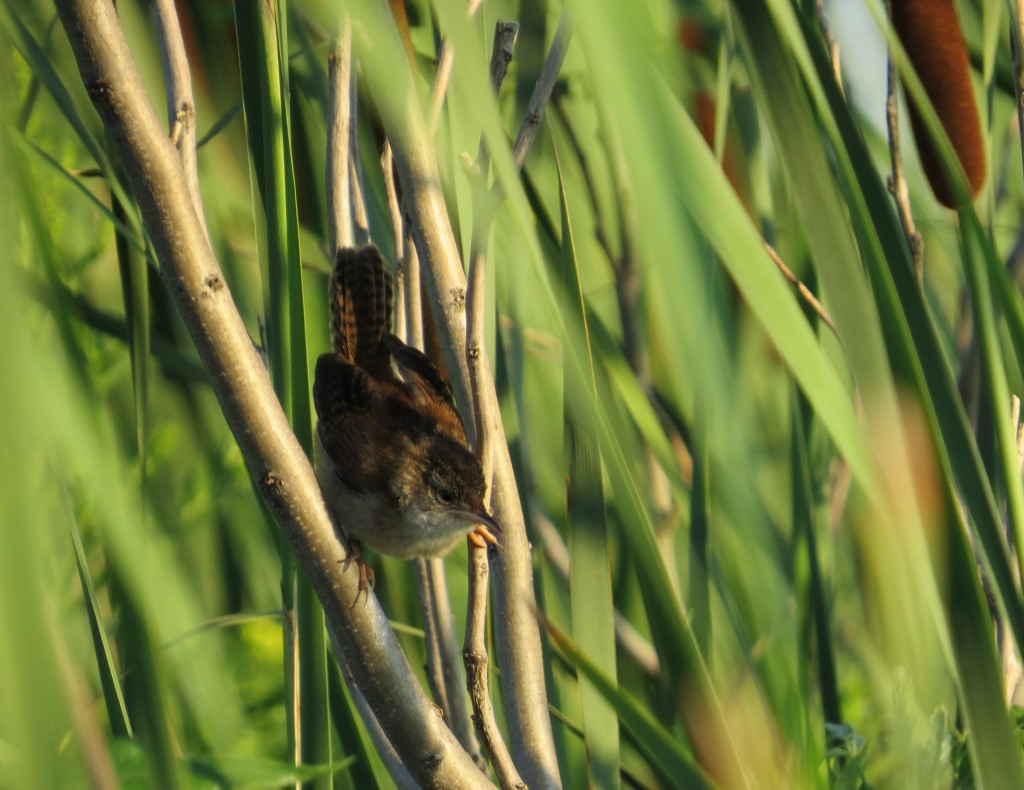 You can see the resemblance to the Sedge Wren, except this bird was much darker.  I thought it was really neat how these birds are built to live in the cattails.  Check out the way it holds itself up. 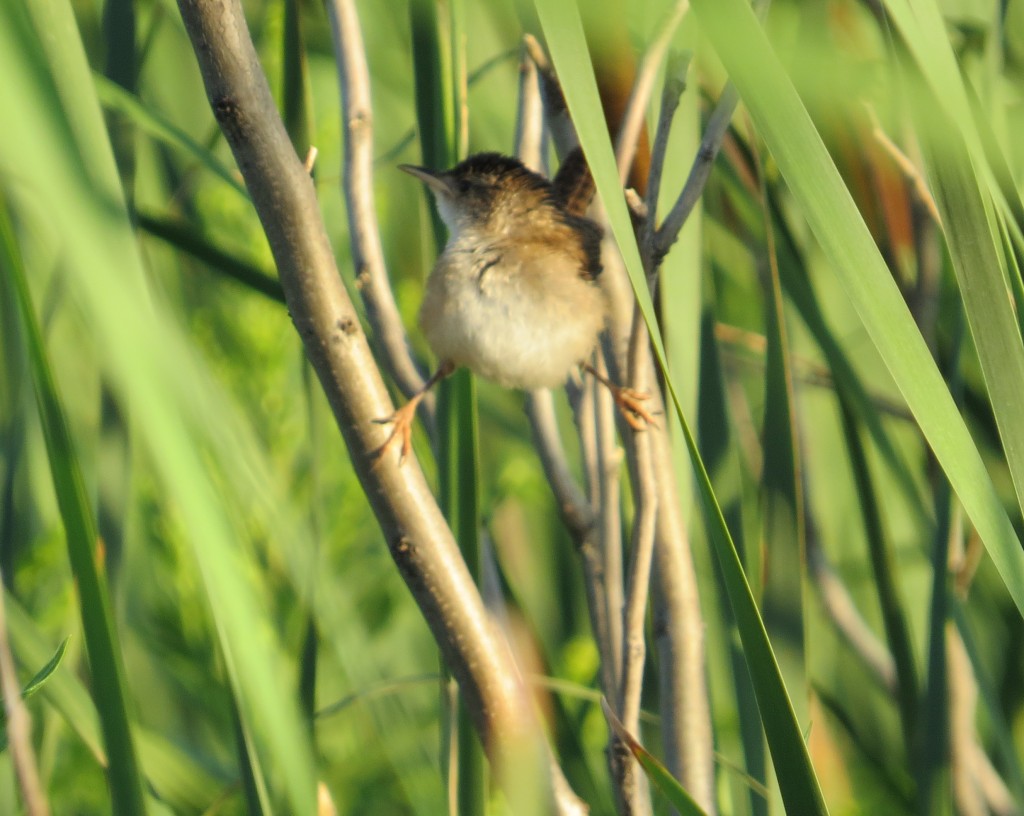 A two-wren day! A two-lifer day!  Evan now sits at 196 species.  The noose is tightening on 200.  Will they all come in one day, or will it be a drawn-out battle to get them one at a time?