Click this link to read Up North – Part 2: Oberg Mountain and the Black-throated Blue Warbler.

After enjoying the beauty and temps of the shore for a few days, it was time to head inland to the Iron Range to visit our families.  Our trip to the North Shore had been a birding success as we hit two of our three targets and picked up a total of four life birds.  Even though the weather was nearly 25° hotter inland and we’d seen some cool birds, there was still a lot of fun to be had.  The kids could finally do some lake swimming (an impossibility in Lake Superior), go fishing, and see their grandparents and cousins.

We continued our camping trip by staying at a local campground while we visited home.  Almost immediately I had one kid begging to swim and another begging to fish.  That first night we went swimming because it was so hot. 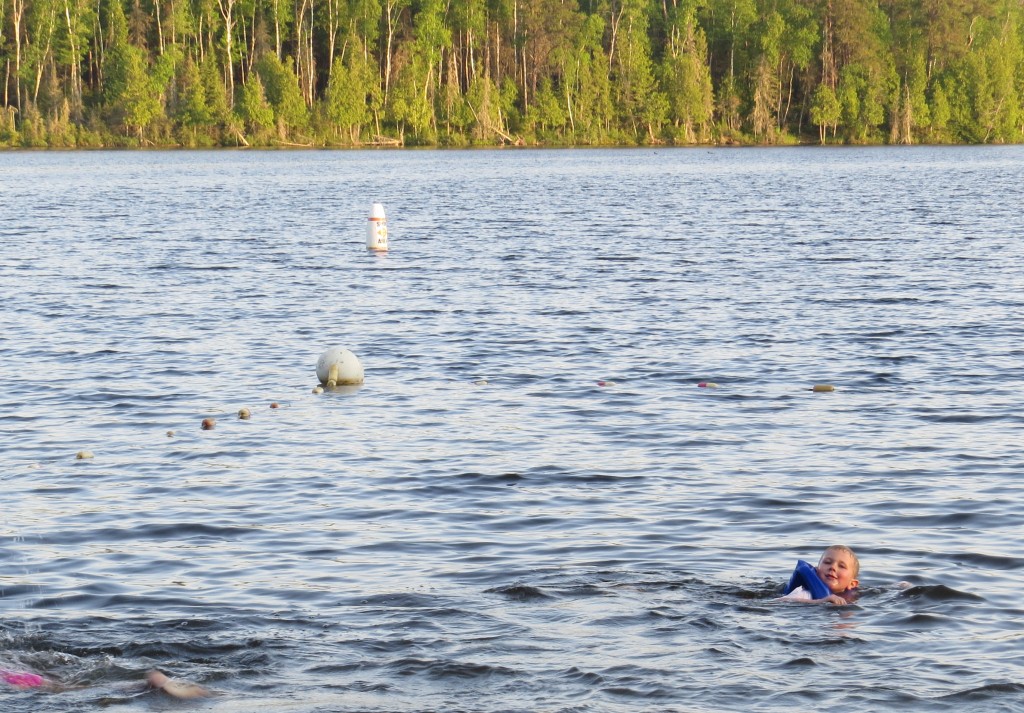 The adults weren’t the only ones watching what was happening in the water.  These two sentries kept a close eye on things too. (Bald Eagle and Osprey) 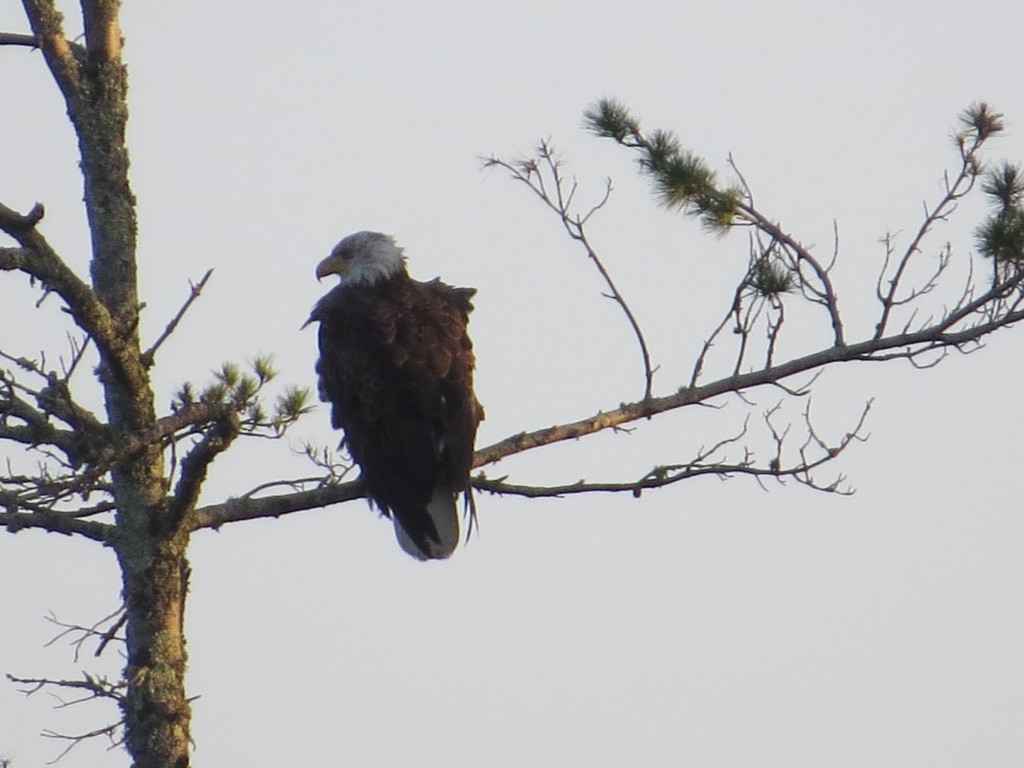 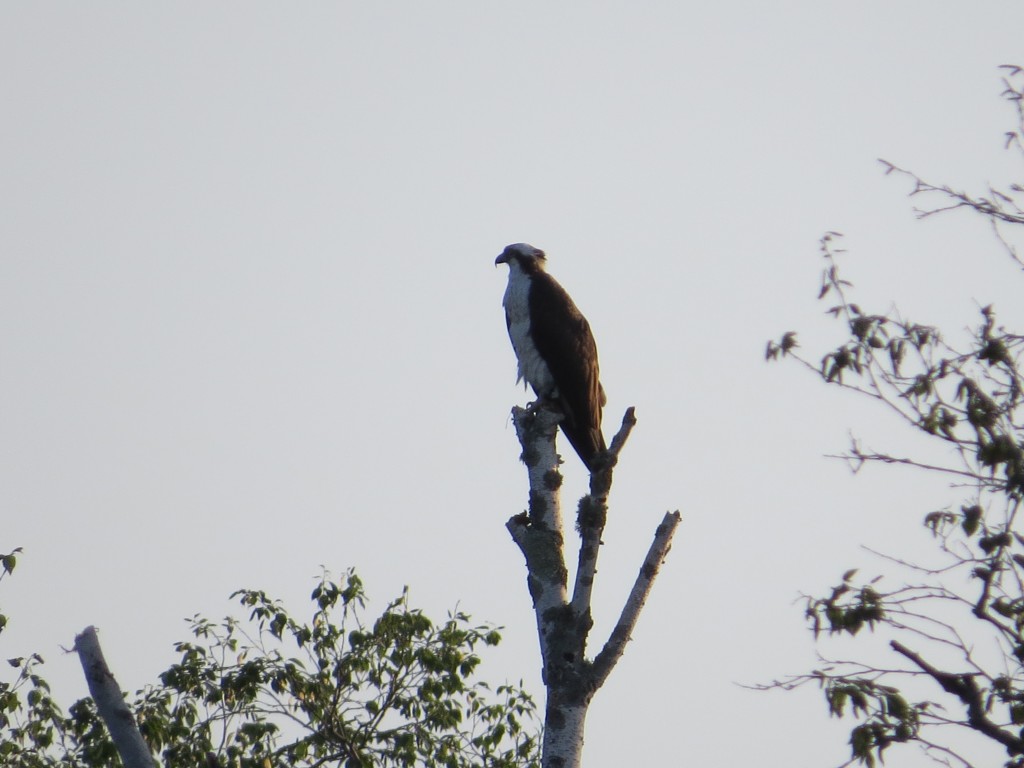 Birding was definitely not the main focus of this trip as we were here to see family, but we squeezed in a little birding here and there and sometimes had birds appear incidentally.  We tried to go birding on my dad’s property, but the heat and bugs forced us to call it off.  This property is unique in northern Minnesota because it is largely prairie habitat surrounded by woods.  This diversity in habitat creates a wider variety of bird species. In our limited time of birding, we tried to find a singing Le Conte’s Sparrow but could not locate it.  It was fun to see quite a few Savannah Sparrows, though. 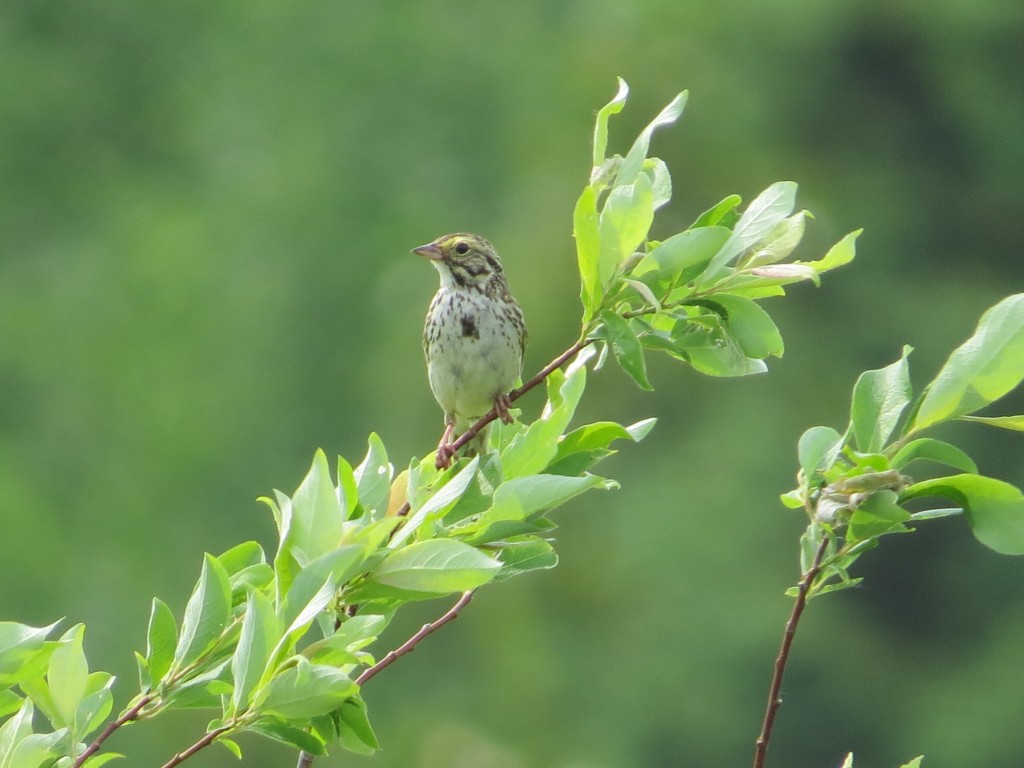 Our campsite also proved to be a really good birding location.  When we first set up camp, I heard a song that was reminiscent of the Black-throated Blue Warbler.  But it was just a little different.  I couldn’t tell what it was, and I couldn’t get my eyes on the bird. Then a posting came in to MOU-Net where a birder finally identified a bird making an unfamiliar song.  He finally determined it was the Cerulean Warbler – a bird that is rare and in decline and can only be found in a small range.  Since this bird is a bird on our priority list and was found close to our home, I began studying the song.  It seemed to match what I was hearing at the campground!  If this were true, it would be big birding news since it would be well out of its established range.

I really wanted to make a great find and get this life bird, so I would go birding right by the campsite in the early morning while my family slept in.  I never did get a good look at my mystery bird, but I was thrilled with the birds I did see while I searched.

Here is a male Blackburnian Warbler with either food or nesting material in his beak.  I also found the female, so I’m guessing there was a nest nearby. 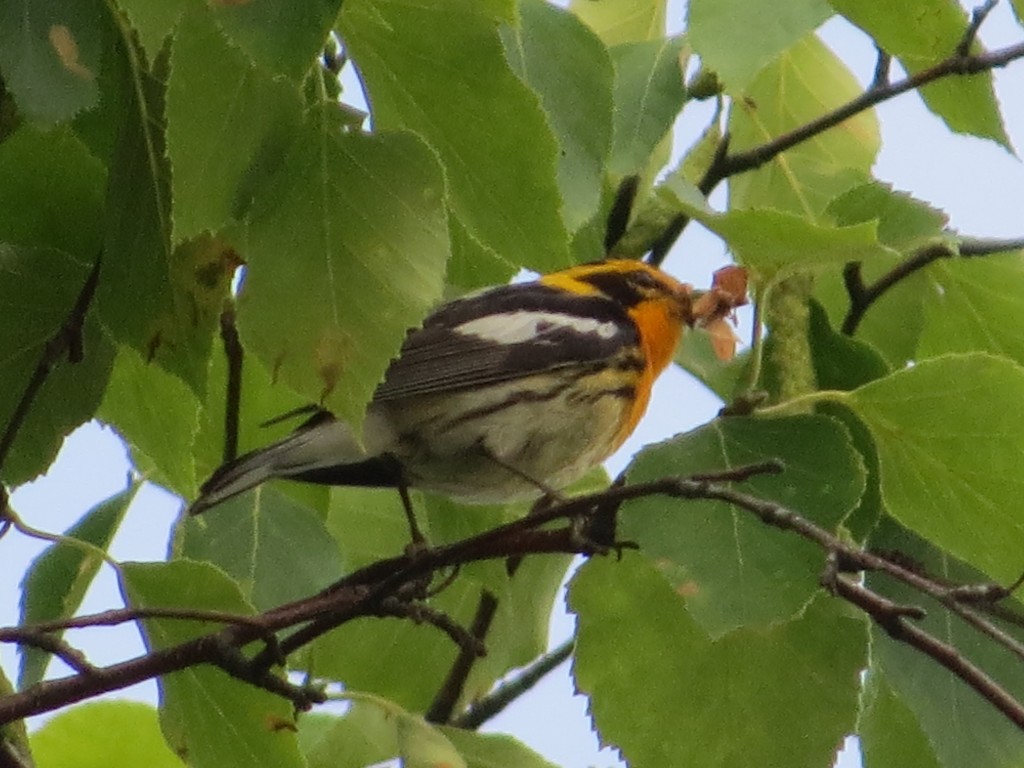 This next warbler is quite common Up North.  If you’ve ever been to the woods, I’m sure you’ve heard the Ovenbird with its very loud, very stacato “Teacher! Teacher! Teacher!” song.  It booms in the understory.  These birds aren’t often seen, so I was pleased to capture this one with my camera. 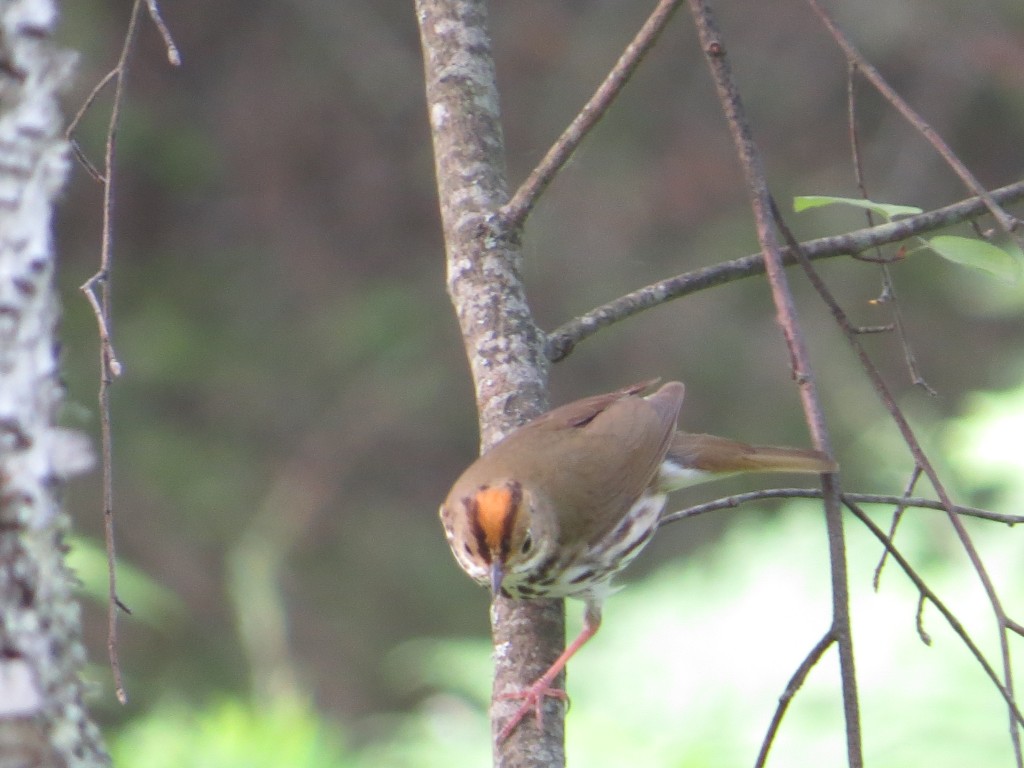 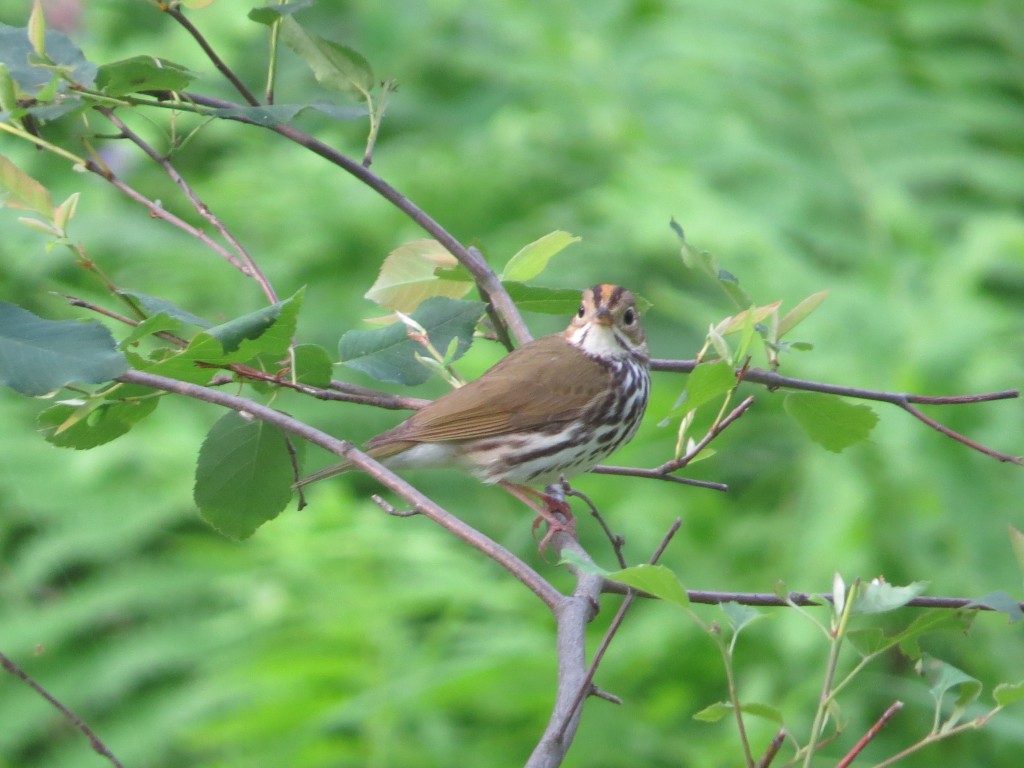 I was really excited to locate this next warbler that hangs out in the tops of leafy trees – the Northern Parula.  This photo is taken into the morning sun.  I tried to get on the other side of the tree so the sun was at my back, but the leaves blocked my view of the bird on that side.  So this photo is bad, but had I captured him in all his splendor, you’d be amazed at this baby-blue beauty. 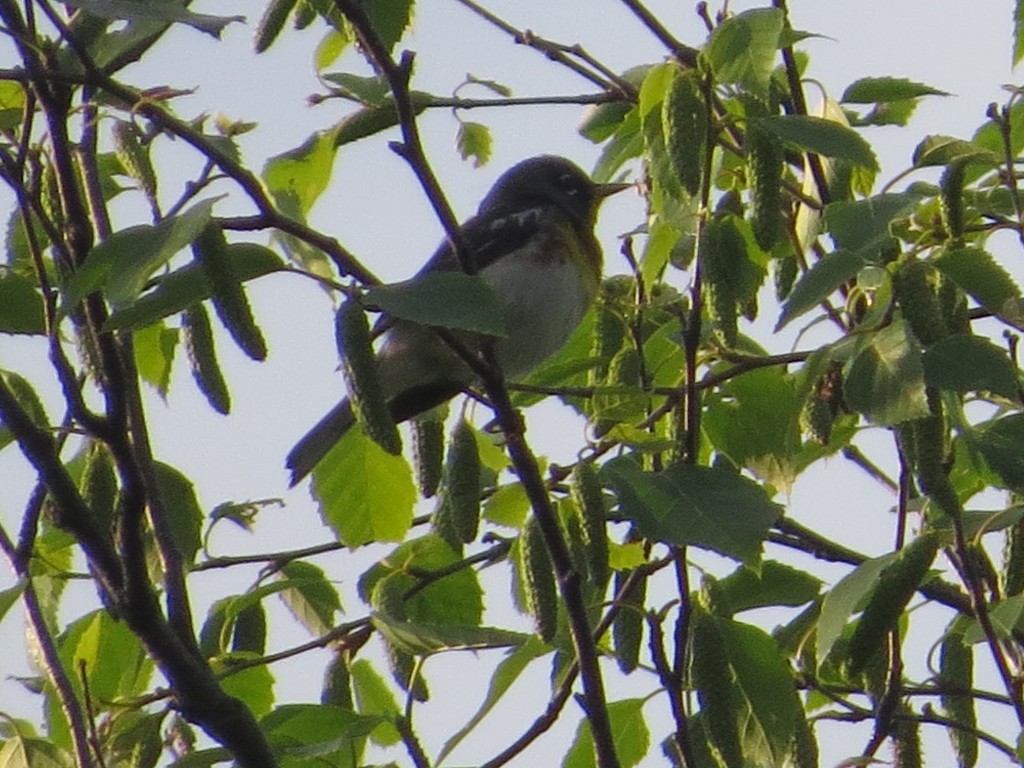 All of these warblers were found when I was standing in one spot hunting for my mystery bird.  One morning I returned to the camper to see if people were awake yet.  Since they were all still sleeping, I decided to sit in a camp chair outside of the camper so I wouldn’t disturb them.  While I was enjoying the quiet campground whose only sounds were those of singing birds, I heard a squawking in the nearby trees.  It sounded like Blue Jays.  Even though it is a common bird, I pulled out my camera in case one presented itself for a good photo op.  All of the sudden, one burst out of the evergreen tree.  But it wasn’t a Blue Jay. Instead it was a Gray Jay!  This was a life bird.  And it wasn’t just one bird.  There were several Gray Jays coming out of the woodwork making all kinds of racket and raiding the campsite.  They were encroaching on my space from all over while I sat in my chair. 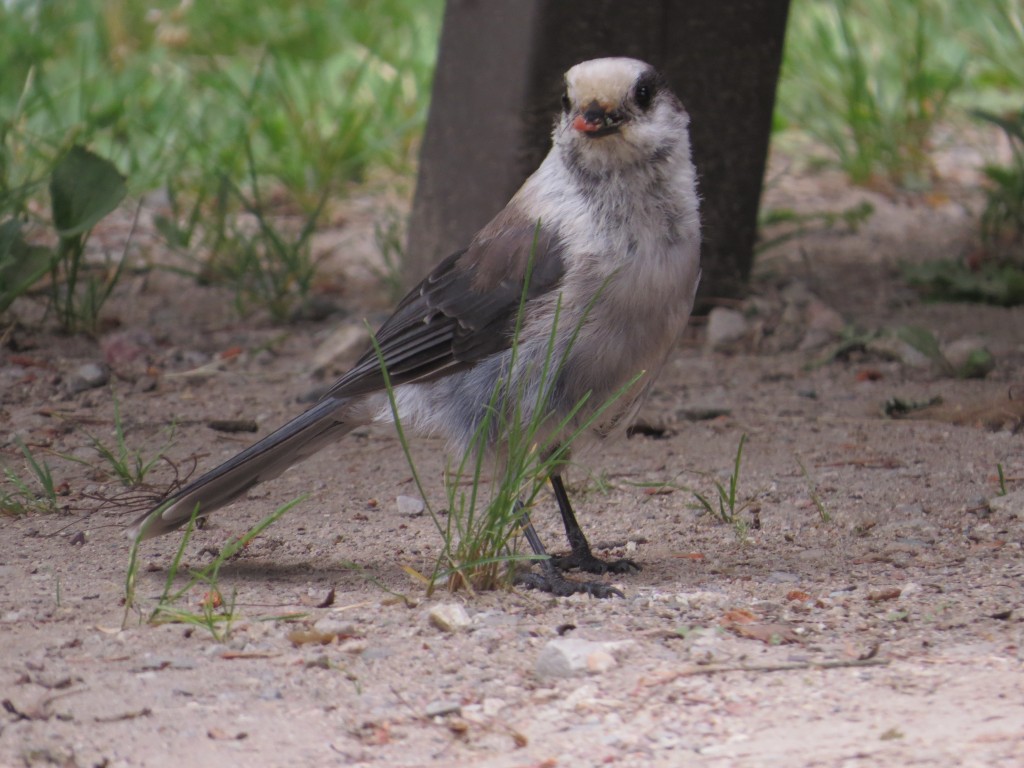 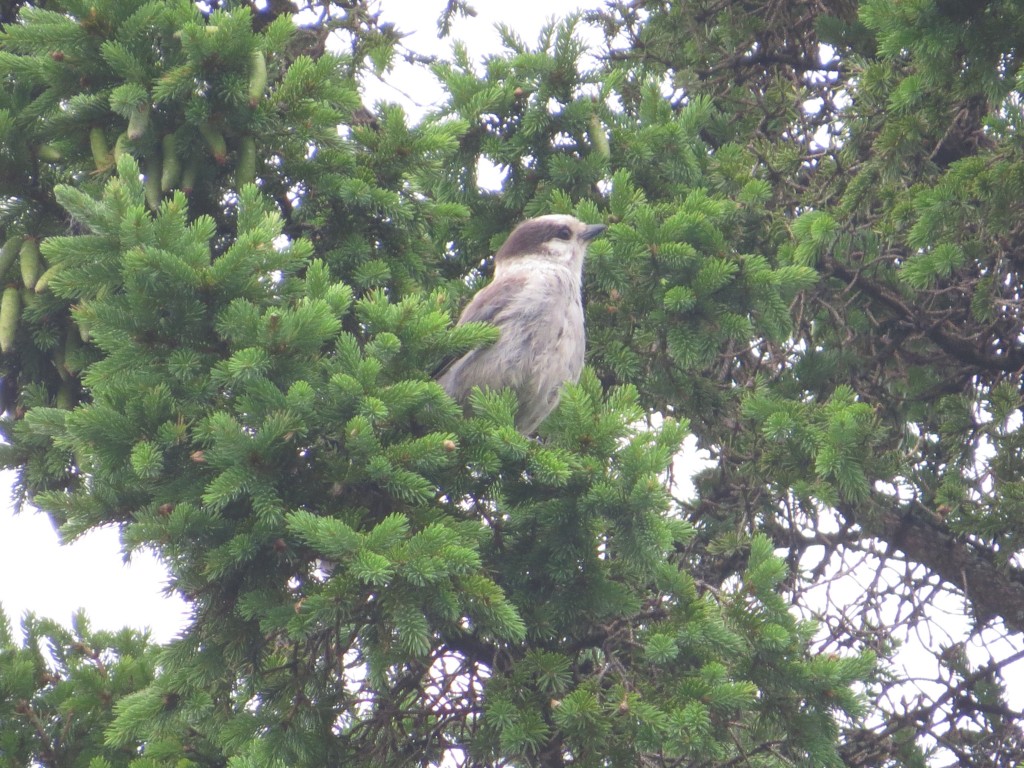 In a voice louder than a whisper I tried to alert Evan without waking the rest of the campground.  He wasn’t waking up at all.  Melissa woke up and asked what was going on.  I told her there was a life bird in our campsite, and then she tried to wake Evan.  No luck. 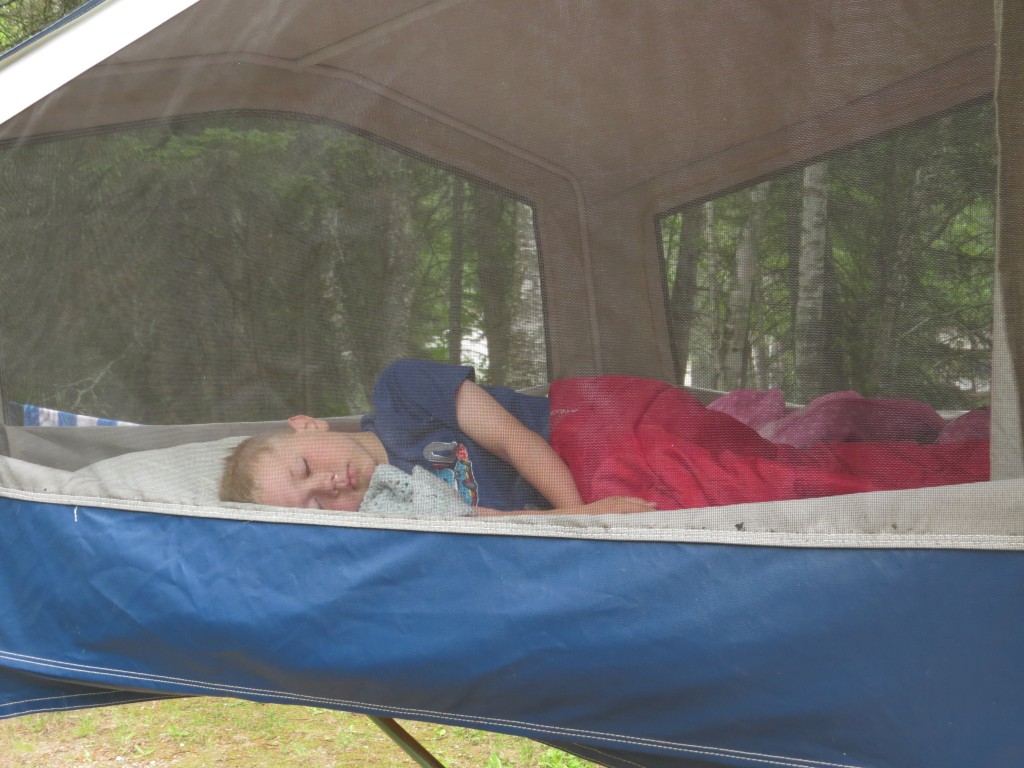 Seeing that the birds were hanging around, I got up off my chair and poked Evan through the screen.  He sleepily opened his eyes and listened to me tell him what was happening. He quickly sat up and tried to look out his window to see a bird.  However, they were in the woods now but still making a terrible racket.  Evan could have got a good look if he came out of the camper, but instead he flopped back down sleeping hard. He’s claiming this life bird anyway since he said he dreamed about it and saw the trees move.

It seems that Gray Jays wouldn’t be the only incidental lifers of the trip.  As we headed down Grandma and Grandpa’s dusty road, I spotted this Wilson’s Snipe sitting on a fence post.  I had seen one a year ago in my overgrown lot next to my property, but Evan still needed it.  So I backed the car up for him to get a good look.  There was no worry about this guy fleeing.  It was as motionless as a statue. 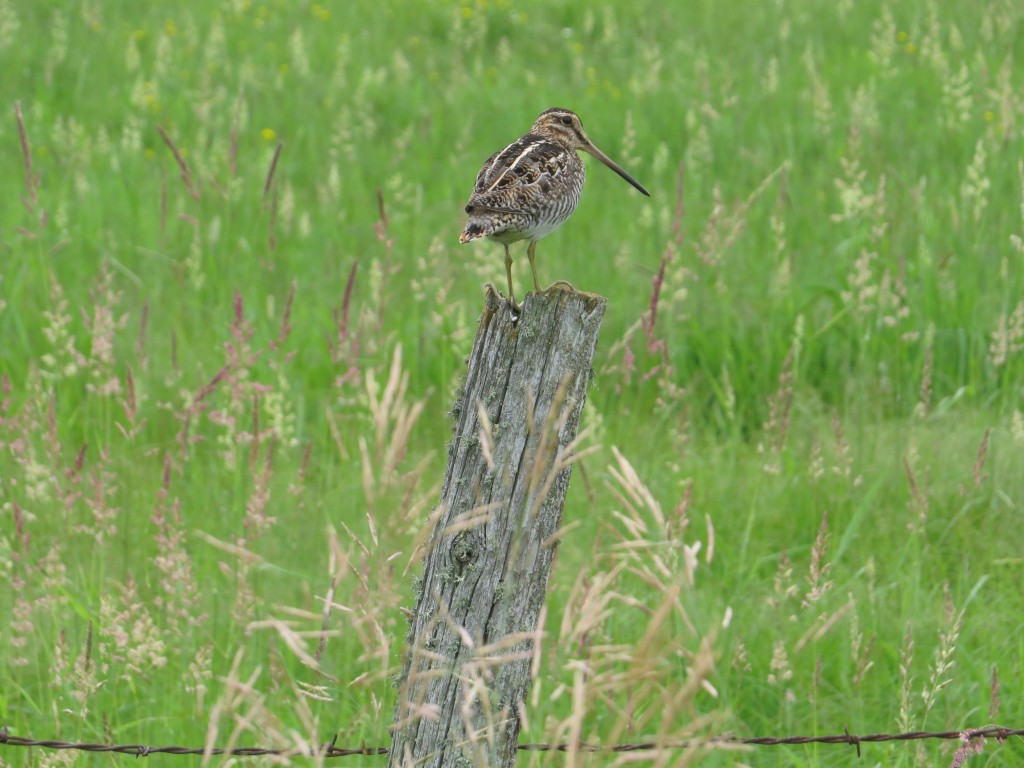 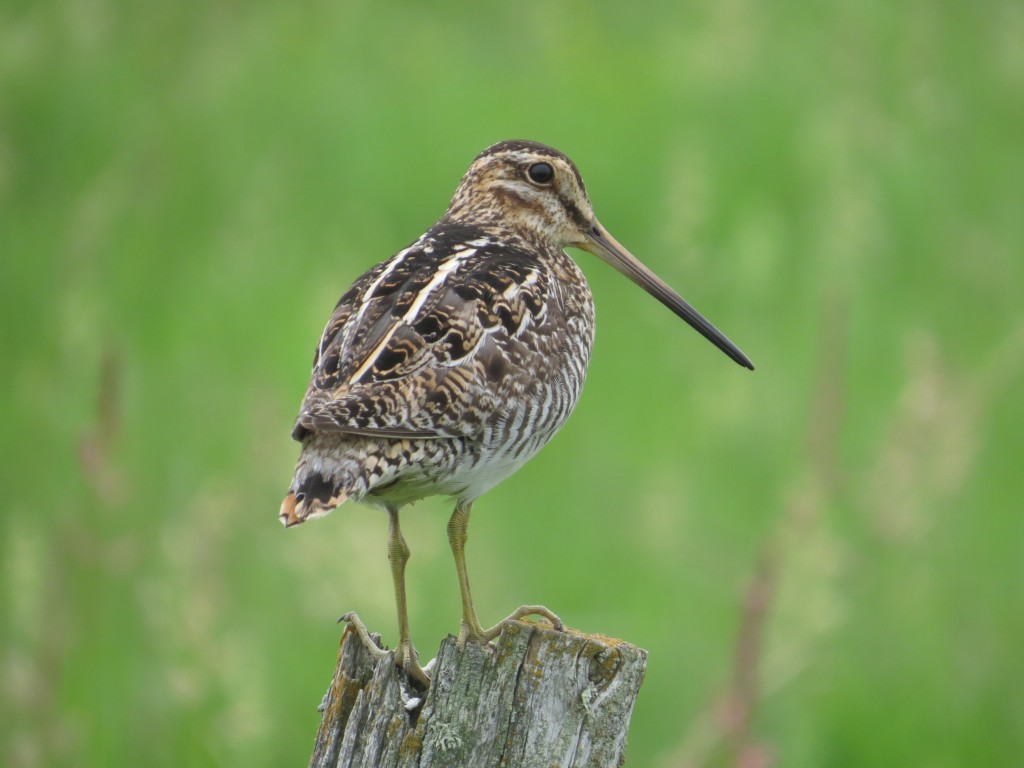 I really wanted to call up my friend Jeff, who is an up-and-coming birder.  He does not believe that a snipe is a real bird.  I guess I might be a little skeptical too if I had been taken on a snipe “hunt” only to be abandoned by prankster friends miles from the nearest town in the dark of night.  So, they are real, Jeff.  But next time, come snipe hunting with me in the daylight.

It was a great Up North trip.  Evan tallied six life birds, and I got five.  More important than that, it was good to be in the woods again enjoying the sights and the company of family.