So, how did I come up with the name for this blog? The answer goes beyond having a catchy title, though that was important to me so that people’s curiosity might be peaked and so that it would be easily remembered when they wanted to check it out.  While that’s true, there are two main reasons how the title came about.

First, in the cover photo of the blog, Evan is literally screaming, “Great blue heron!” as he was excited to see one standing on the shores of Pelican Lake near Orr, MN.  That photo captures Evan  perfectly.  His excitement is palpable.  Long before this blog came to be, that photo was seared into my memory because it captures his love of birds so perfectly.

The second, and most interesting reason, how the title came to be has to do with a bird discovery Evan made all on his own.  Because of Evan’s interest in birds, we started faithfully feeding the birds at our house.  One species of birds that was a regular visitor was the mourning dove.  Often we’d have over a dozen bopping around the yard and feeder.  Evan spent a lot of time watching all the birds out the window.  When he wasn’t doing that, he was flipping through his Kaufman Field Guide to Birds of North America, page by page, over and over. 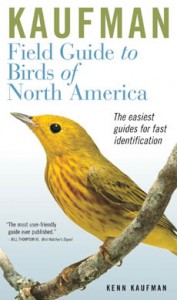 One day Evan opened his bird book and excitedly claimed that we had one of these other species of doves that was listed in his field guide.  He said it didn’t have spots like the mourning doves.  Since he is not yet a reader, he had to ask us the name of any bird he didn’t know in his book.  The bird that Evan claimed to see was the Eurasian Collared Dove.  In a reversal of “The boy who cried ‘wolf’,” I didn’t believe him at first.  I thought he was mistaken.  I had never even heard of this dove, let alone seen one. The colored range map in the book did not show Minnesota in its range.

One day when I was outside, I saw a monster-sized dove in the driveway.  It was far bigger than all the other doves ambling about.  I sneaked inside to grab the binoculars to get a closer look.  Sure enough, it was paler in color than the rest and it had the signature black bar on its neck of the Collared Dove.  It matched the book’s description perfectly of the Eurasian Collared Dove. I started looking at the range map a little more closely and noticed a dotted line that ran through Minnesota, and the description contained these words, “Native to Old Word.  Became established in Florida in the 1980s.  Now rapidly expanding range to west and north; has reached Arizona, Montana, New York; likely to colonize much of the continent.”  Huh. That dotted line I had taken for granted on first glance had meant they were becoming permanent residents of the great state of Minnesota.  Evan was right!  I couldn’t believe his attention-to-detail as a five-year-old (see for yourself in the pics below for the difference between a Mourning Dove and a Eurasian Collared Dove).  I never would have noticed this dove if it weren’t for Evan.  My confidence in his birding ability went way up.  From now on, I will trust him when he makes a birding claim.  So the title of the blog alludes to the story of the boy who cried “wolf.”  But unlike that story where trust was given blindly and then revoked, Evan started with the disadvantage of mistrust and earned my respect and trust as a birder in his own right. 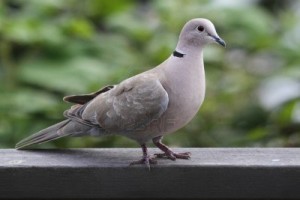 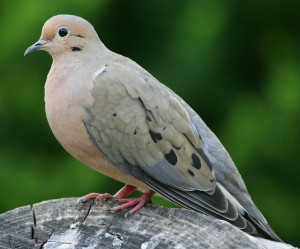 4 thoughts on “More Than Just a Name”