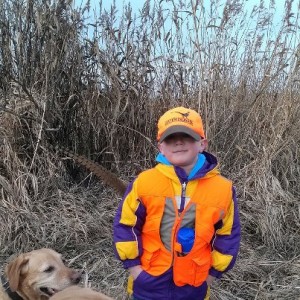 While Evan and I are beginning birders (those who find excitement in seeing birds ALIVE), I have long been a wing-shooter whose primary pursuits have been the ring-necked pheasant and the ruffed grouse.  The fact that I have chased game birds for two decades played a significant role in my interest in birding.  I will go into that more some other day, but in this post I’d like to share a fun hunting story that Evan and I experienced.

Every time I head out pheasant hunting Evan asks if he can go along.  I have let him accompany me on short grouse hunts at Dad’s property where he can walk on trails, and he has sat with my Dad and me in the deer stand.  However, pheasant hunting is much more difficult.  Either I am walking in waist-high prairie grass or slogging my way through a cattail slough.  Needless to say, it is hard work, and I don’t let him come with me.

This Thanksgiving we did not make the 265 mile trek Up North.  Instead, we decided to stay home, and we were invited over by friends for Thanksgiving dinner.  That meant we woke up Thursday morning with no stress of traveling or making a feast.  That fact combined with beautiful weather of sunny skies and 45 degree temps meant I was going to go out for a quick pheasant hunt before feasting on that most delicious of all birds.  Basically I just wanted to get the dogs a little exercise.  I decided this would be the perfect day to take Evan along on an easy hunt.

I took Evan to a Wildlife Management Area that had a road winding through it.  It would be easy walking for him – we could take the road and let my two yellow labs, Faith and Chance, work the cover on the sides of the road. We parked the SUV at the farthest point that motorized vehicles were permitted and stepped outside to an immediate birding experience.  A hundred yards from us was a large slough (20 acres) that hadn’t froze over yet.  Right away about 50 mallards took flight, and gracefully gliding across the water were four swans!  I am not sure of the species at this point, but I think they were trumpeters.  Three were the brilliant white color, while one was a gray juvenile.  This was a big deal – Evan has been enthralled with Trumpeter Swans ever since we read E.B. White’s The Trumpet of the Swan last spring.  They are definitely cool birds.

Less than five minutes into our walk on the road that ran around this slough, Faith’s tail started wagging ferociously – she was on a bird.  Not long after, Chance’s tail was moving faster than a helicopter rotor.  Both dogs were hot on scent and sprinting ahead.  This meant one thing – it was a pheasant, and it was a rooster at that.  Hens do not run and will sit extremely tight whereas roosters will run loooong ahead of you and may never jump up.  In fact, a couple weeks ago, I felt a hen’s wings beat against my leg as she flushed right next to my foot.  A couple days later, I got into a mess of about 15 hens that all flushed within 10 feet of me.  Because the dogs were on the move, I literally ran to catch up so I could be within gun range of a flushing pheasant.  I didn’t have to run long, thank goodness.  As I was watching my young, inexperienced Chance working I heard the unmistakable cackle and saw the flash of brilliant color burst into the sky right in front of his nose.  It was a left-to-right shot, and I pulled the gun up and shot.  I was surprised to see it drop; I usually miss at least the first shot.  Chance pinned the still lively rooster until I could reach it.

I couldn’t believe it.  I never thought we’d see anything.  Not only did we see a pheasant, but it was a shoot-able one that was flushed by my inexperienced (dumb) dog, shot by me (on the first shot), witnessed by Evan – all in the span of a five minute hunt.  We continued walking to try to find a second rooster to fill out my limit, but it just wasn’t to be.  At one point the dogs got birdy again.  Apparently Evan is a quick learner in his dad’s hunting abilities, or he has learned the art of smack talk.  As I followed the dogs this time, Evan hollered at me, “Be sure to shoot it in one shot!”  So if you’re a fellow
birder, don’t be offended by my hunting hobby – I have a pretty minimal effect on the pheasant population!