This past Monday morning when I was running errands with Melissa and Marin (we teach on a four-day week), I checked email on my phone while standing in a discount store that does not deserve to be named.  Finally, after what seemed like an endless drought of good listserv postings, a stunning vagrant had been found — an adult male Rufous Hummingbird had been coming to the hummingbird feeders of Steve and Mary Nesgoda in Le Sueur.  As I read the email, pleasant memories came to mind of bumping into one on a residential street in Maricopa, Arizona last March and then again seeing and photographing one in Westcliffe, Colorado this past July. I smiled as I put my phone away, proud that I had seen this bird already and feeling absolutely no compulsion to chase this one in Le Sueur.  After all, I’m not a serious state lister.  Sure, I’ll go after life birds, but I haven’t reached the point in my birding where I’ll take a long car trip just to add a bird to my Minnesota column.  Abstaining felt good — I felt mature.

Later that day when Evan was home and within earshot, I was musing with my wife about which of the guys would be going after this great state bird as evidenced by this being an ‘Accidental’ species.  This was only the fourth male that had ever been seen in the state.   I was explaining to Melissa that I’ve seen it before so it made no sense for me to go.  Then Evan, with a furrowed brow, piped up and worriedly said, “But Dad, I’ve never seen one.”  He spoke a truth that I had completely forgotten; both of my previous encounters had been when I was out birding by myself.  This suddenly became an interesting dilemma.  With an increasing interest in my state list that has some impressive Accidental and Casual species and with Evan’s lack of RUHU in his life, this bird was now in play.

Still, it took me until Wednesday to pull the trigger on the trip.  This bird had been reliably coming to these feeders for several days now.  The chase would not be easy to pull off. I didn’t get off work until 4:00. By the time I picked up Evan and let my dogs out, it was almost 5:00 by the time we hit the road.  It was just under two hours to Le Sueur. Sunset was at 7:25. It would be tight, real tight. As such, I pressed the pedal of that mini-van down pretty hard.  A little too hard. As I met a string of three oncoming cars, I saw the last one was a Kandiyohi County Sheriff’s deputy. Brakes were activated and vigilant eyes were shifted to the rear-view mirror.  He turned around. Nuts. Here it comes.  I was more aggravated by this encounter slowing me down than I was about a potential ticket. After following me awhile doing a much slower, much more legal speed, he pulled me over.  I was not anxious.  No, I’ve been waiting for this day for a long time. You see, I’ve had a driver’s license for 19 years now and much to Melissa’s and many others’ frustration, I have never once gotten a speeding ticket.  It’s not that I’ve never been speeding. In fact, nothing could be further from the truth.  I’m just lucky – really, really lucky.  I have been ready to pay my fair share and buy some donuts to boot when the day finally comes.  But today was not that day.  The gracious deputy just told me to watch my speed.  He even had the courtesy to keep the stop brief and get me back on the road within a few minutes.

It was a setback for time, but we pressed on and enjoyed the beautiful day.  The temps were in the 70s and the panorama was colorful in every direction.  Blue skies were accented with wispy, white clouds, corn and soybean fields were changing from green to gold, and trees and shrubs were changing over into the muted oranges, yellows, reds, and purples of fall on the prairie.  It was stunning. The farm/prairie landscape ended rather abruptly when we got to the Minnesota River valley where we were now in a landscape of winding roads, large hills, and woods all around.  It, too, was gorgeous.  It is in this valley where Le Sueur is found, and despite what the name may suggest, it is a beautiful area. On top of all that, I had made good time getting to our destination not getting lost or having to stop despite not studying maps ahead of time.

We pulled into the driveway of the country home where Steve and Mary live, a quaint place with some farm animals, big shade trees, and an apple orchard.  Right away Steve was there to greet me with a handshake and a friendly smile that epitomizes Minnesota Nice. And we were directed to sign their guestbook of birders that had come to see their super-star bird.  Evan and I were #s 95 and 96 respectively.  Mary took us right over to the feeder where the Rufous Hummingbird had been visiting.  I was dubious to follow because we were just a few feet from the feeder.  I felt like I should have been behind some glass in a car or a house.  She assured us that this bird was unafraid of people, barking dogs, falling apples, etc.  It was a real bully of a bird that had been chasing away all the Ruby-throated Hummingbirds.  Mary had also told us the bird was just here three minutes before we arrived, and that this was the latest it had ever been seen.  She knew we were coming, so she was glad it was still showing.  She excitedly told us that everyone on the list had seen her bird.  We were optimistic as we waited and watched and waited.  We tried to turn many Ruby-throats into our fiery bird, but we just weren’t seeing the celebrity.  Mary explained that the Rufous had always gone to bed well before the Ruby-throats and that the now abundance of Ruby-throats was not a good sign since the Rufous always chases them away when he’s around.  Our hopes were sinking fast with the setting sun.

In a bit of frustration and boredom I decided I may as well try to finally get a photograph of a Ruby-throated Hummingbird, one of those birding chores I just haven’t gotten around to yet.  I didn’t even have that going for me as this guy or gal snubbed my camera at the last second. 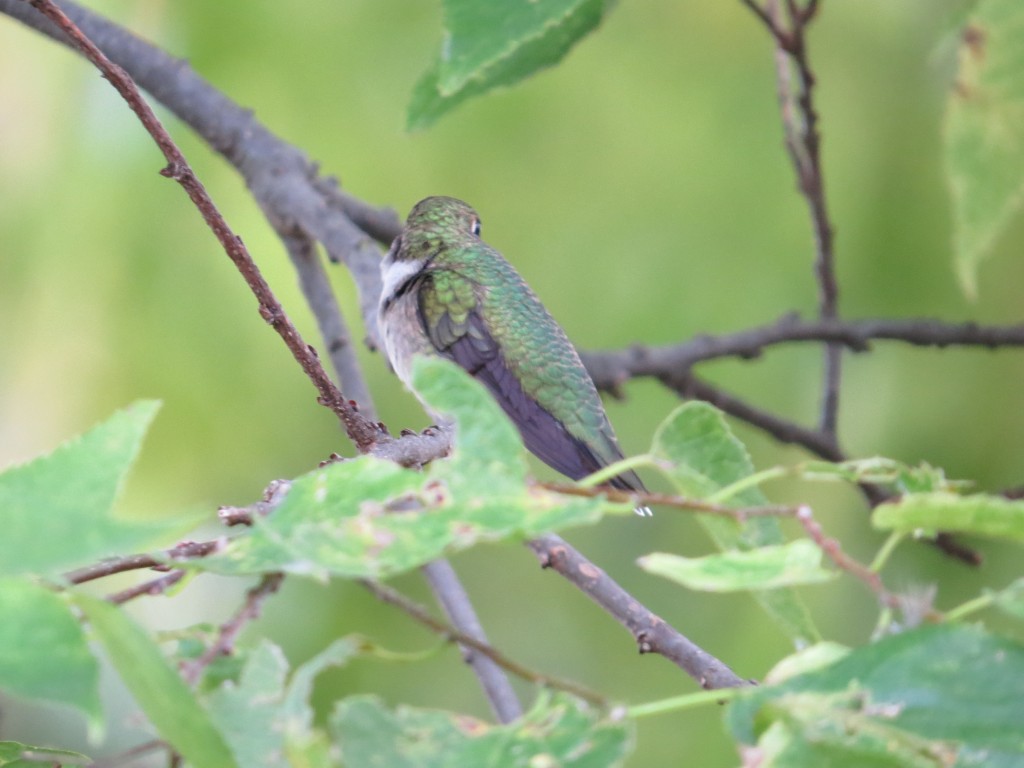 It was now clear that we would not see the Rufous Hummingbird. Three minutes.  That traffic stop made the difference between a successful RUHU sighting and an epic fail.  Then there is nothing worse than missing the bird than having to make the long trip home.  It was only fitting that we should get stuck behind a slow-moving septic tanker, leaving a putrid stench in his wake.

As I drove and tried to breathe, that list kept gnawing at me.  Nearly a hundred birders had seen Steve and Mary’s RUHU, except us.  Like Jack Shephard in Lost, the urge to go back was as unrelenting as it was impractical. Another weekday chase would likely have the same result, and a full weekend at home made a weekend chase out of the question.  Never mind that this bird could just up and leave at anytime. But that list, it haunted me.