All good things must come to end as they say, and this Colorado story is no different. Except this story needs to come to an end because more hard-hitting birding stories have been brewing back home since we got here.  It’s been intense. We’ll catch up on all that later, but for now we must finish the tale of birding Colorado.

Having taken four hours to get to Colorado Springs from Uncle Jon’s (a trip that takes non-birders two hours), we were now ready to hit the plains of eastern Colorado where the birds and landscape would be less inspiring and allow us to push the pedal down and get home. When driving through Colorado you learn that elevation is a big deal as it’s posted on every city’s population sign.  Undoubtedly this was the brain-child of the much cooler mountain cities, and it’s the scourge of those self-concious eastern towns who must display to the world just how elevationally-challenged they are.  The drop in the cool-factor of birds is directly correlated to the simultaneous decreases in elevation and town self esteem.  But what the eastern birds lacked, they made up for with great vigor. Case in point – Western Kingbirds.  They were everywhere and perched boldly on any kind of wire proudly displaying their awesomeness.

Cruising along on U.S. 24 I had a beautifully patterned Swainson’s Hawk come sailing high over the road.  Evan dipped on this bird in South Dakota and pouted about it since I saw it.  Because of this debacle, I kept my mouth shut when I saw one while driving through Denver earlier in the week.  But this time I couldn’t help myself, and I hollered that we had a Swainson’s.  Of course this jarred Evan out of his backseat activities, and he couldn’t get on the bird in time, setting off a fountain of tears.  Apparently he really wanted to see this hawk bad. I turned the car around to chase after it, but it had vanished.  Nuts.

Thankfully, though, that’s not how the Swainson’s saga ends.  As I drove east out of some non-descript town (sorry town, I only remember the names of the cool, high-elevation cities), a Swainson’s Hawk shot up out of nowhere from behind a grassland hill flashing his white wing linings and reddish brown chest as he soared across the road a mere 20 feet off the ground. I hollered. I couldn’t help it.  Evan was panicked.  I pulled over.  Thankfully this bird cooperated and gave Evan his sought-after lifer as it circled on thermals right by the road. 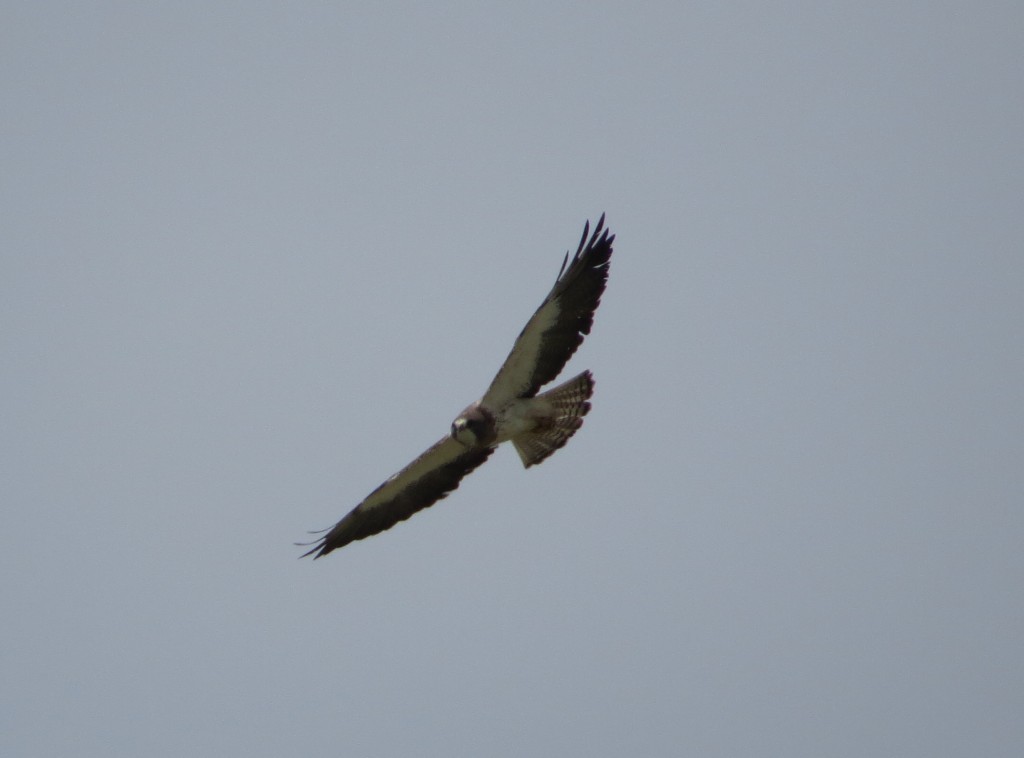 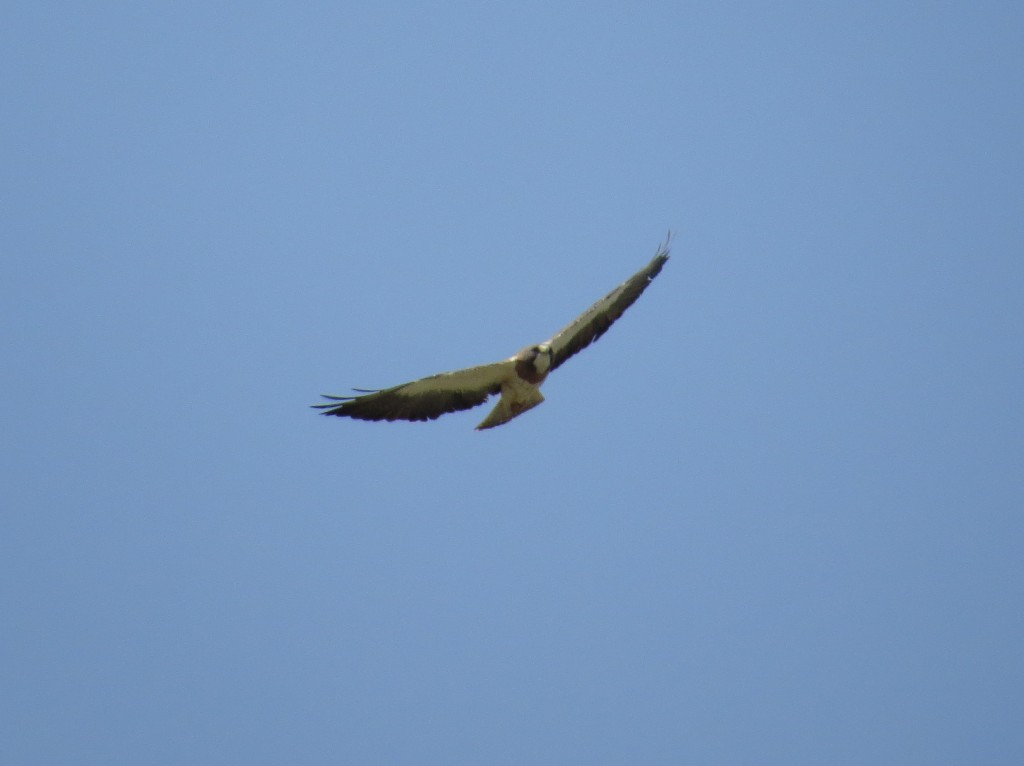 So it took four Swainson’s Hawks before Evan finally got his lifer and I got my photo documentation.  Then a funny thing happened – or not if you are a birder: they were everywhere.  I bet we saw close to a dozen Swainson’s Hawks by the time we finished out Colorado, nicked Kansas, and then got into Nebraska.  And Nebraska? Well, when I was filling up with gas at some podunk town in the east-central part of the state, Evan was getting out of the car to go into the convenience store and he looked up and said calmly, “Hey Dad, a Swainson’s Hawk.” Sure enough another Swainson’s was cruising low over the gas station canopy!  The Swainson’s no longer had power over Evan, but it was still having an effect on me.  Gas still pumping, I reached for my camera to get try to get a shot of a Nebraska Swainson’s. 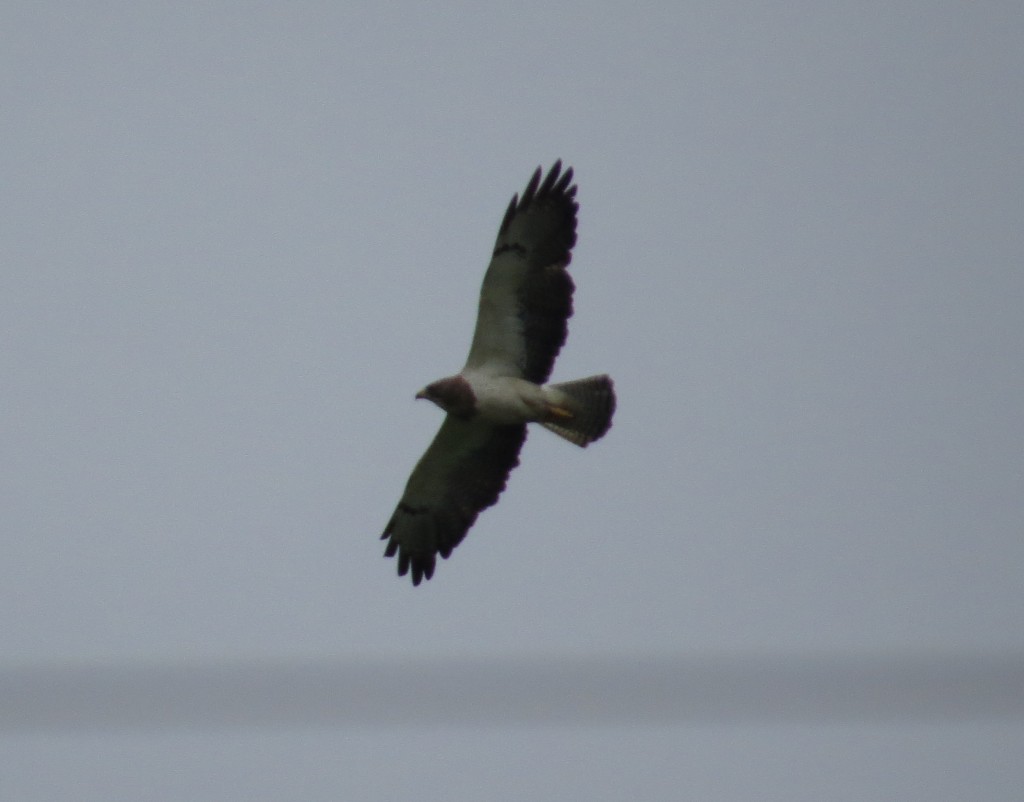 Are you sick of Swainson’s Hawk photos yet? Too bad!  It’s probably the coolest hawk I know, and there’s even more coming in a future post!

The Swainson’s Hawk alone would have made Nebraska a worthwhile state to drive through as far as birding goes, but surprisingly Nebraska put up another cool bird and lots of them.  No, it wasn’t the Western Meadowlark that holds the title of state bird in Nebraska and like a half dozen other western states (the meadowlark is a cool bird, but really the states all should have drawn bird names out of a hat).  Instead it was the Red-headed Woodpecker. Interesting side note about state birds on the trip – we didn’t see a single Ring-necked Pheasant in South Dakota and only one Lark Bunting in Colorado.

It’s kind of funny how things play out.  After spending a night in Kearney, Nebraska, I missed my road that angled to the northeast.  This forced me to have to go north and east but not northeast – something that aggravated me as a traveler and as someone well-versed in the Pythagorean Theorem.  Compounding the issue was that we hit road construction where we were stopped with a whole long line of cars waiting for the flag lady to let us have our turn to proceed.  Except there was no visible road construction for miles.  We had been waiting for quite awhile with no end in sight.  When the guy in front of me got out of his car, lit up a smoke, and leaned across his hood while jawing with the flag lady, I couldn’t take it any more.  I peeled out of the line and headed back west to go south just to be able to go east and north again.  It was awful and made worse because we were now traveling on gravel roads.  In the flat land of Nebraska, the gravel roads are laid out perfectly on a grid with an intersection every mile.  And they can really grow corn tall in Nebraska, so I was forced to stop at every intersection to avoid a collision.  The agony!

But there is a silver lining to this miserable cloud that seemed to follow us on our journey home.  We spotted a couple Red-headed Woodpeckers.  It is such a pretty bird that is declining in numbers.  It’s a good day any time you see one.  As we kept driving, though, we kept seeing them! Ten in all! It was crazy and fantastic and made the miserable travel worth it.  Melissa said it best when she said this was truly the way to experience Nebraska if you have to experience Nebraska – tall corn, dusty roads, and Red-headed Woodpeckers. Good save, Nebraska. 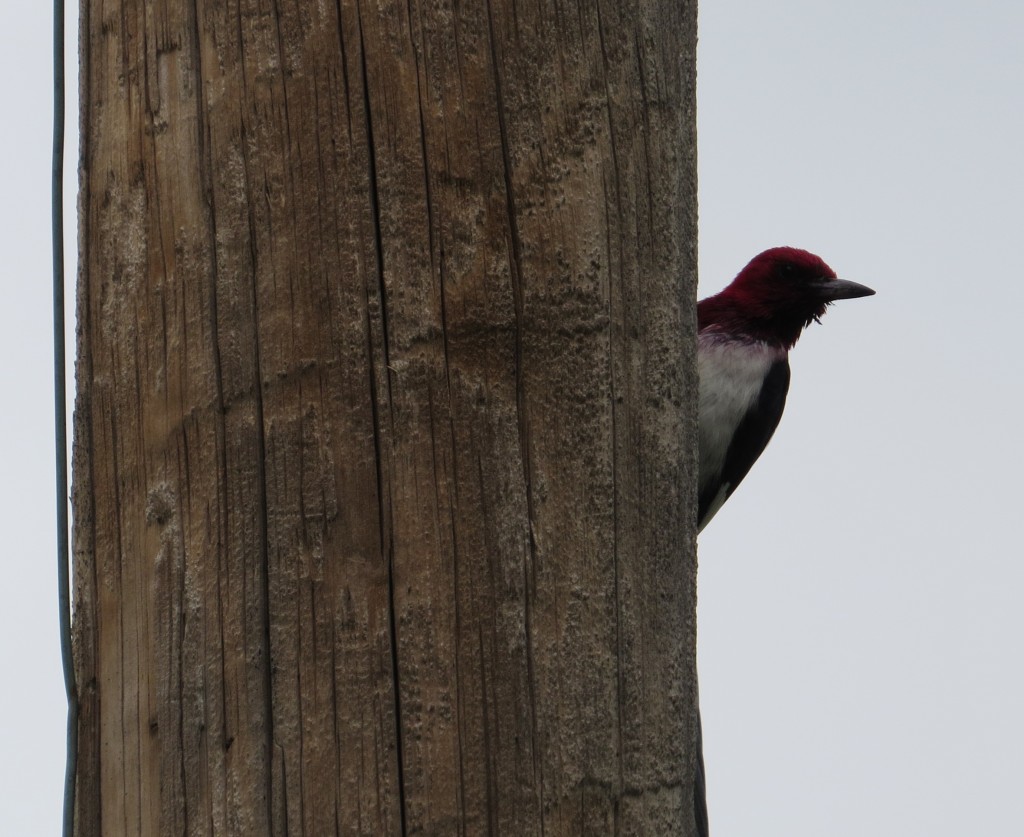 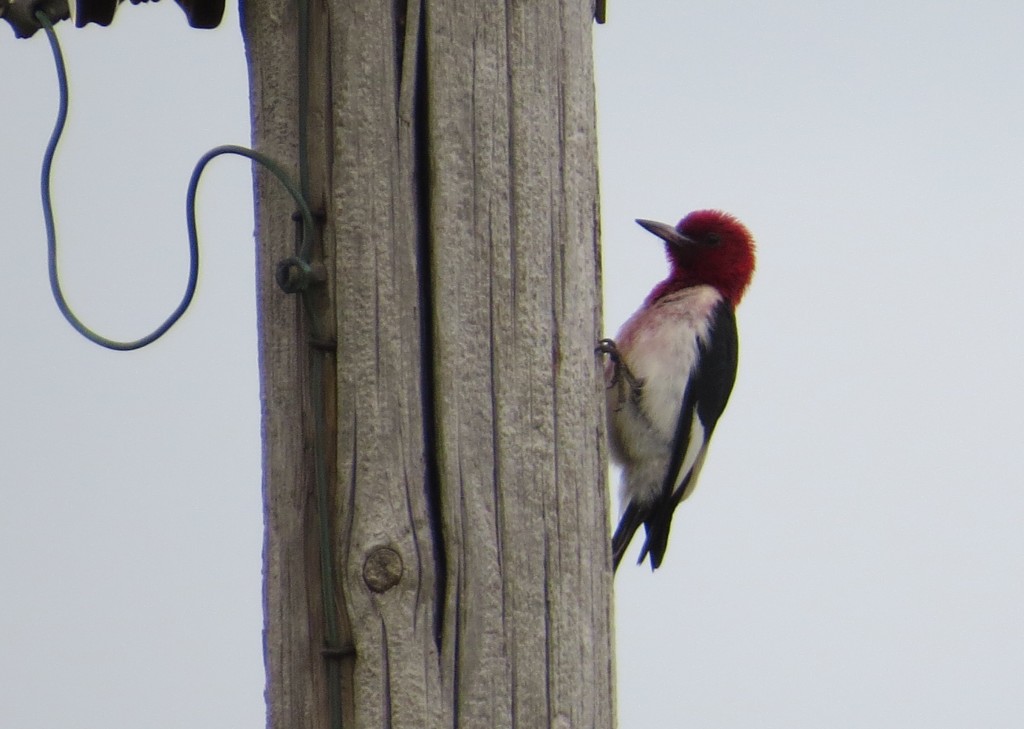 We also saw a couple of Brown Thrashers, and I even spied a Loggerhead Shrike in a bush as we flew past.  I was too frustrated with the stop-and-go travel to make many voluntary stops for pictures, though.

So, there you have it.  We got home to Minnesota without incident, and the birding has not slowed down a bit since we got here.  Who knew that late July and August could hold such bird wonders back home of all places?  Stay tuned.