There’s this tiny town just an hour to the southwest called Cottonwood that is just a dynamic little spot to find some incredible birds.  Southwestern Minnesota, in general, has some phenomenal birding having more prairie and being on the eastern edge of the range for many western species.  There’s always good things happening down there.  Cottonwood isn’t as far south or west as one can go, but it still gets some pretty unique action.  Probably what draws the birds in is a collection of water holes in an otherwise dry landscape.  It’s not like west-central Minnesota where you can’t travel a half mile without seeing a puddle, a slough, or a lake.  This limited water around Cottonwood consists of their famous sewage ponds, Sham Lake, and Cottonwood Lake.  Whatever Cottonwood’s secret is, I have made a couple quick stops when passing through over the years and picked up such notables as Wilson’s Phalaropes and Blue Grosbeaks.

From using my site Birding Across America, I have been following a couple of birders who make regular eBird reports out of the Cottonwood area.  I’ve never met the guys, but based on their modern-sounding first names I’m assuming they are young men – younger than me.  Another indicator of their youth is that they never post to MOU-net while that’s pretty much all the serious birders of the old guard use.  These guys are flying under the radar with reports of California Gulls, Great-tailed Grackles, Western Kingbirds, and much more.  I’m always excited to read their eBird checklists – there’s always at least one gold nugget in there.

This past week it turned out there were 16 such gold nuggets in the form of Cattle Egrets. 16!  The birds were feeding in a small channel that flowed into the east side of Cottonwood Lake.  I had to check it out as Cattle Egrets are tough to come by, and Evan and I have never seen one.  Well, Evan claims he saw one close to home two years ago actually feeding on a cow’s back.  I’m not going to doubt him based on his own established birding reputation, which will be showcased later in the post.  Regardless, I had never seen one, and Steve had never seen one in Minnesota. So it was off to Cottonwood for us.

We got down to this channel and found nothing but American Coots.  I was certain that at least one of those Cattle Egrets would be lingering around a weedy edge somewhere. Nada. So Plan A was gone. We moved on to Sham Lake to look for the egrets there and maybe possibly turn up a scoter of some sort. Sham was a sham.  Just pelicans, the usual waterfowl, and some terns.  By now we were on Plan C which was to bird the sewage ponds.  We weren’t expecting a Cattle Egret here, but shorebirds are on the move so we were hopeful for some exciting bird in the rocks.  Nothing there either.  At one point we got pretty excited about an unusual-looking gull.  Turns out it was just a juvenile Bonaparte’s.  Steve and I both appreciated having seen it and added to our birding knowledge.

Plan D was to move on to the large slough south of Cottonwood.  We picked up some Western Grebes there last year, and its marshy edges felt very egrety.  There was, of course, the usual waterfowl and token yellowlegs on the shore, but nothing stood out as unusual.  Steve set up up his spotting scope to start scanning the far stuff and hopefully pull up something really good.  Being scopeless, I just looked around a bit, occasionally pulling up the bins.  At one point I noticed the dirt clumps in the corn stubble field right next to us were moving.  Looking closer I saw a large, late flock of Greater White-fronted Geese feeding right on the edge of the field.  Somehow Steve had managed to miss this species for this year.  I knew this, so I smugly asked, “Hey Steve, you still need a Greater White-fronted Goose for the year?”  But Steve silenced my smirk when he looked over at the flock and said, “Hey, what’s that white thing?”

Somehow I missed a white bird nestled in with some brown birds in a black field.  I got on it with my camera and told Steve I think we had a Ross’s Goose!  I sneaked up and got some pictures and went back to show Steve.  We knew it was either a Ross’s or Snow Goose.  Looking at the picture we could see the obvious size difference between the smaller white goose and the Greater White-fronted Goose.  That sealed it as a Ross’s Goose since the Snow Goose is the same exact size as th GWFG.  Yes!  It was a life bird for Evan and me. 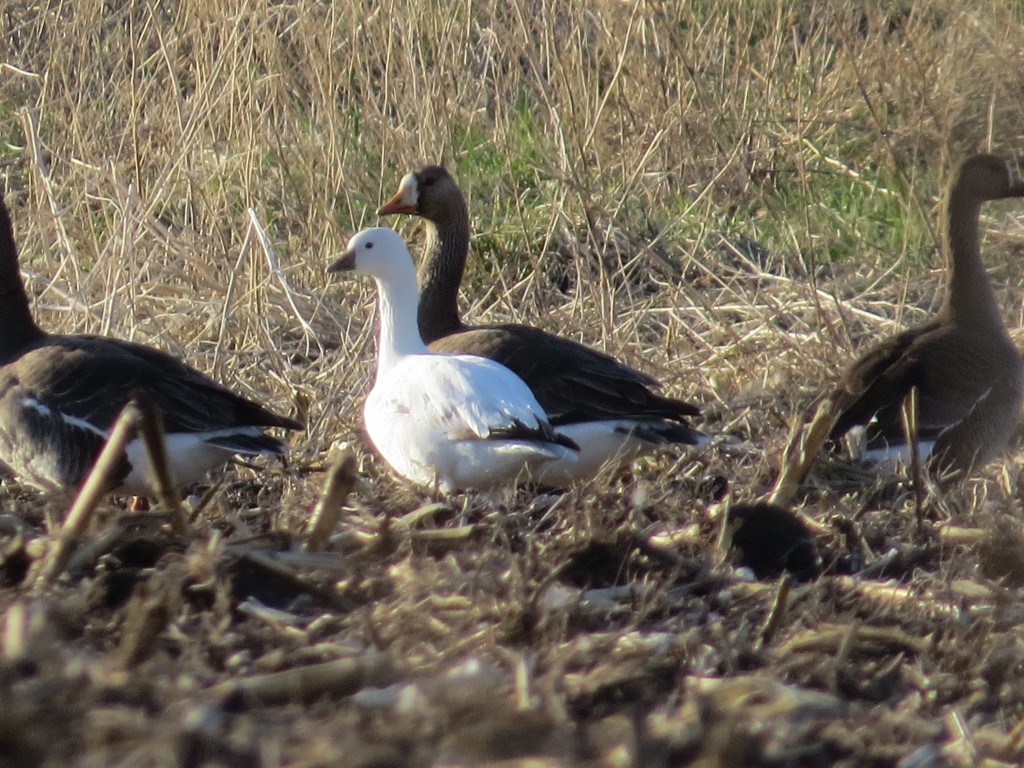 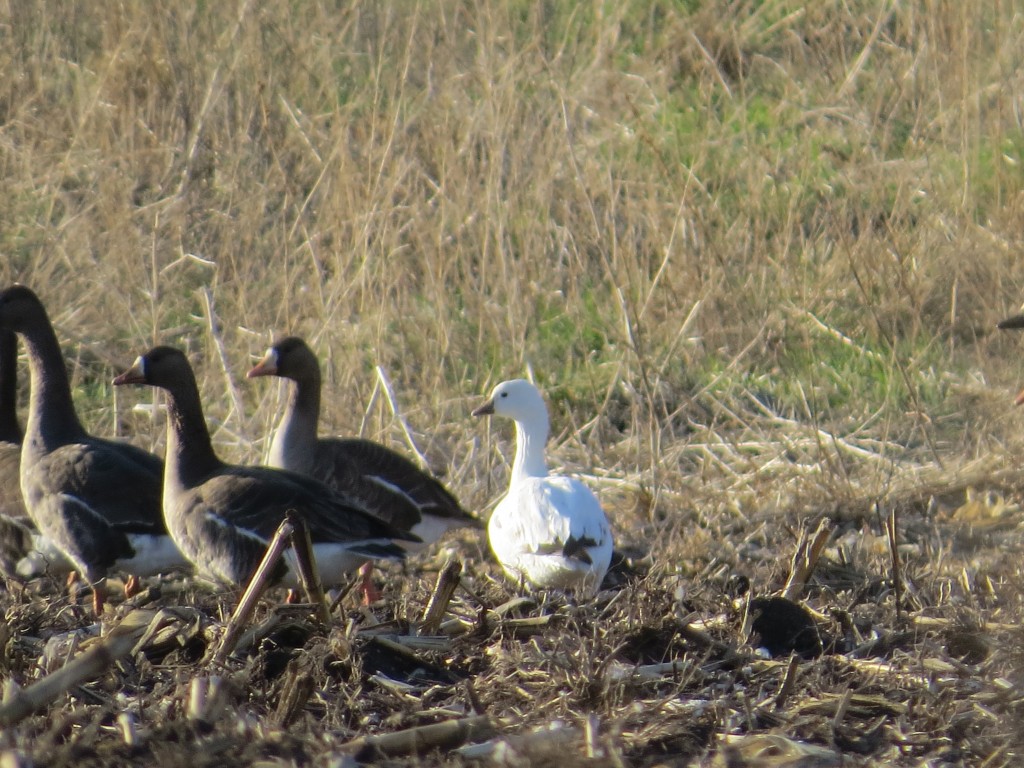 This is one of those life birds that is expected in our area.  We just hadn’t turned one up yet.  They are quite scarce in relation to the other goose species.  I always thought this one would be easy to get since Randy, the wise Yoda birder of Kandiyohi County, had said all you have to do is stand in your yard during migration, find a flock of Snow Geese going over your house, and look for the goose that’s 25% smaller than the rest. Seemed easy enough.  Except we don’t get nearly the fly-over flocks that Randy does even though he’s just 5 miles to the west.  And I’ve learned that Randy downplays how rare or scarce a bird is.  I mean, he’s had a Lazuli Bunting and Yellow-crowned Night Heron in his yard, so why would a Ross’s Goose be so hard to him?  I started to get clued in when I’d see people report Ross’s Geese on the listserv and get all excited about them on Facebook. 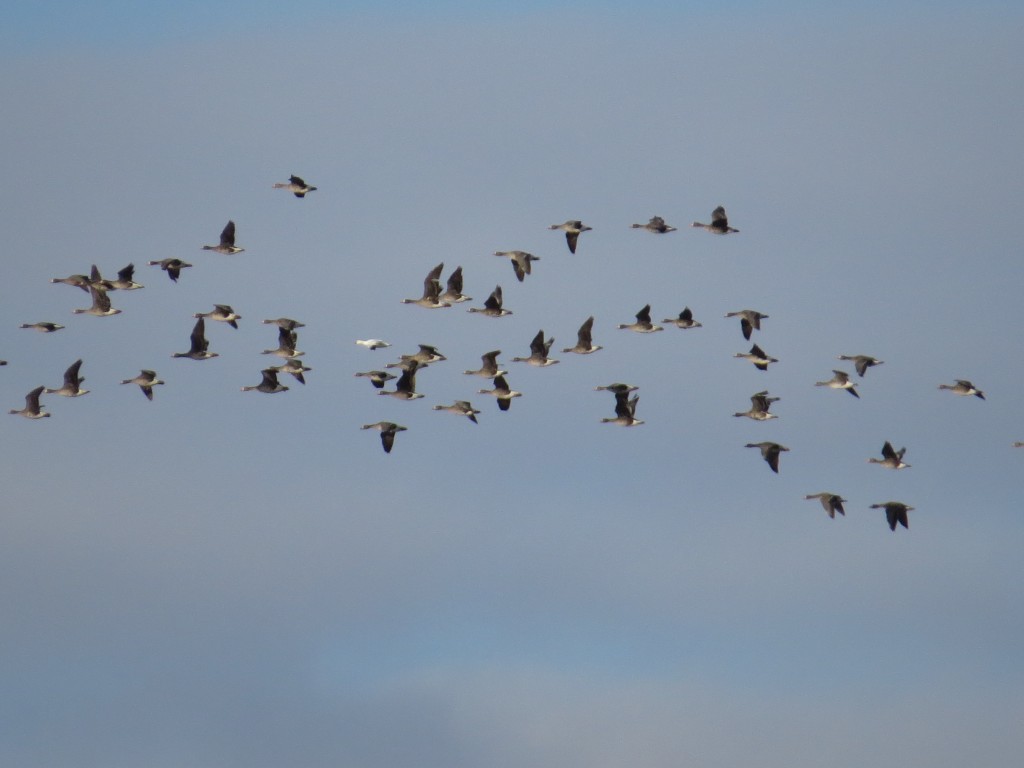 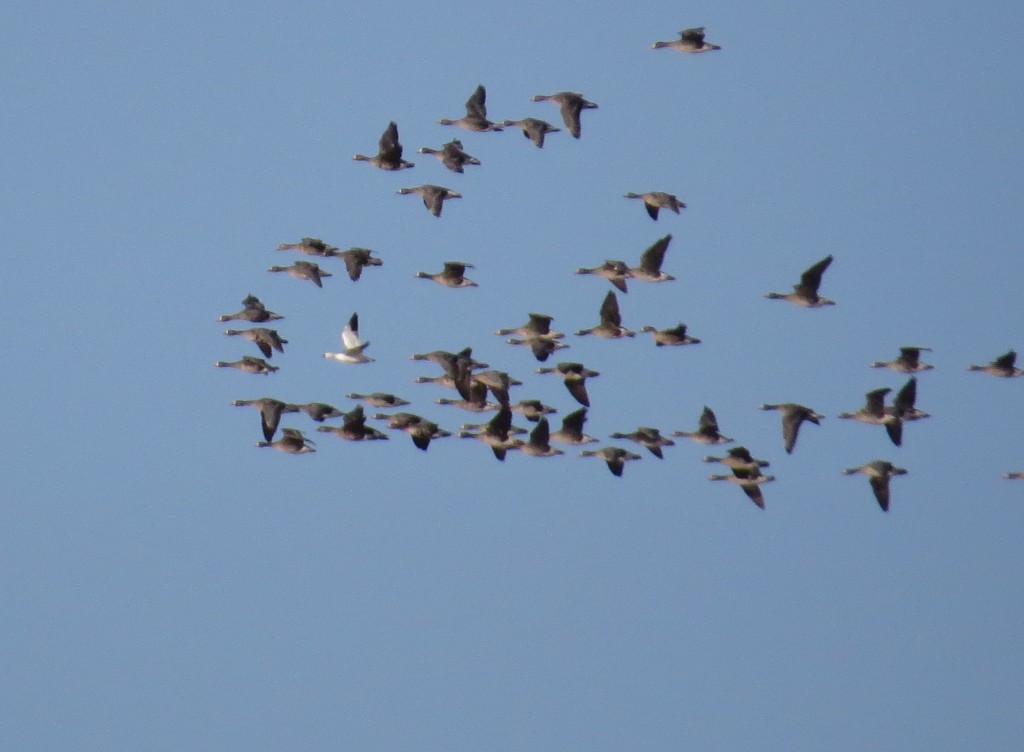 Ross and his entourage

Our trip to Cottonwood was short as it was getting late and time to head back.  We stopped by that channel where the egrets were one last time.  Again, nothing.  But from the back seat Evan says, “Hey guys, I see a Green Heron down there.”  Sure enough, there one stood.  This was the first time I’ve ever got to get a really good look at one in breeding plumage.  The colors were fantastic.  And of course I am referring to the green grass showing up.  The bird was also nice. 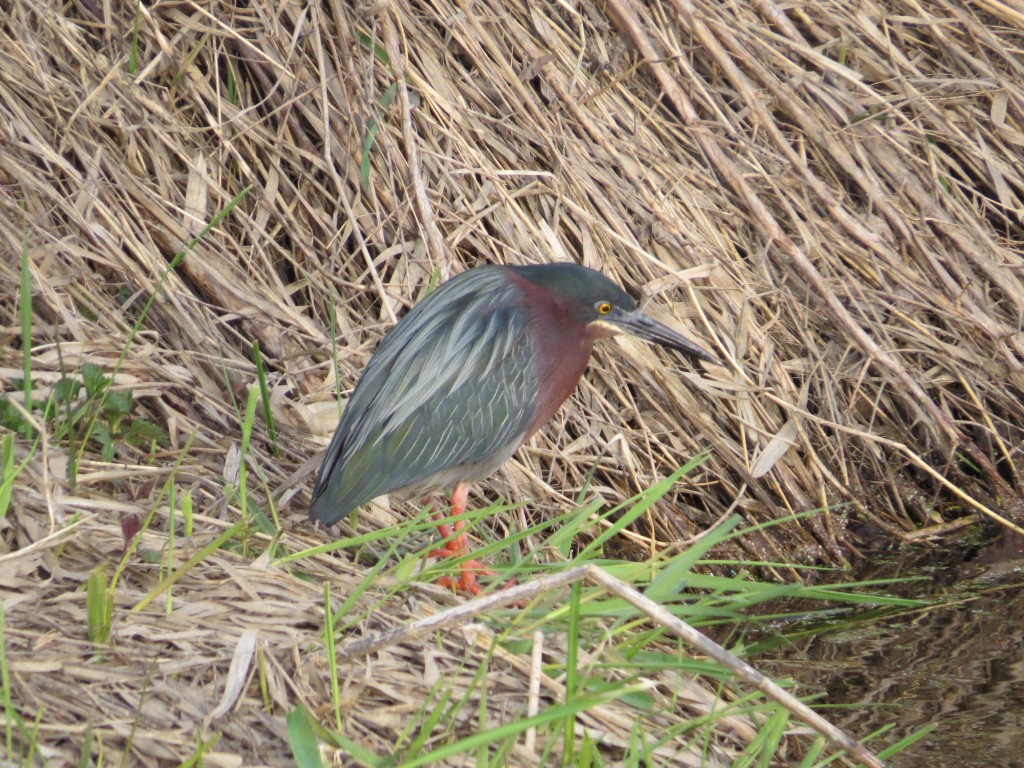 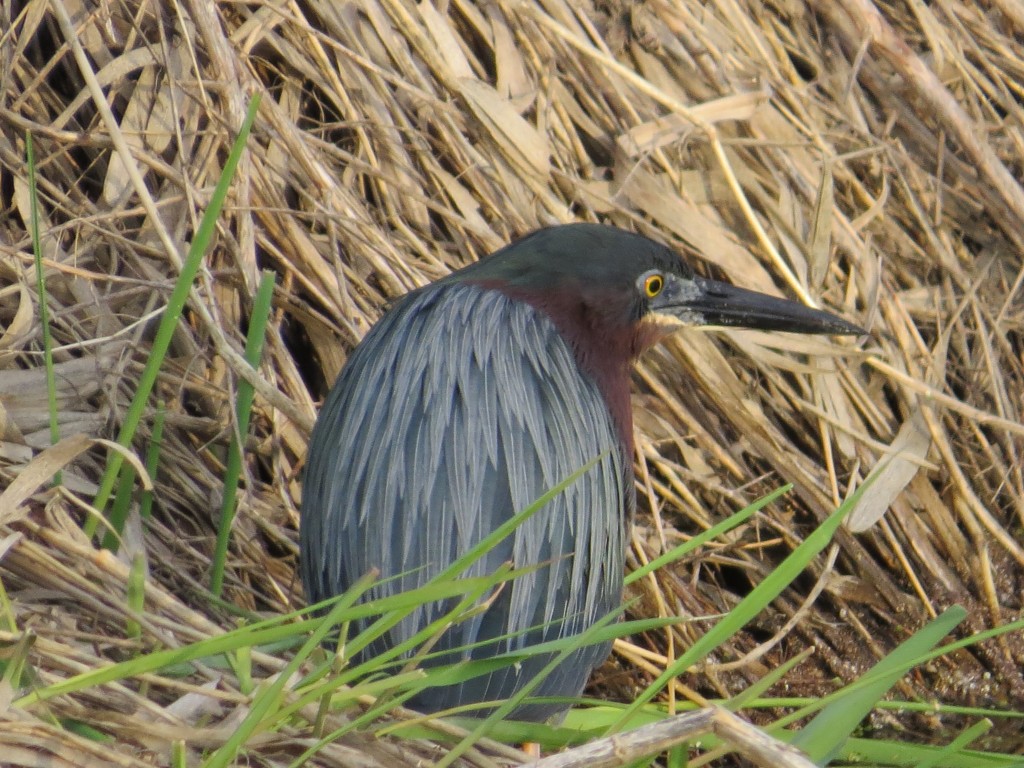 Nice eye, Evan.  We ended up seeing two more of these guys after this.  It’s always a fun bird to see.

It was a good, short trip to Cottonwood.  We didn’t get our target, but we swapped it for another lifer instead.  We’ll take that anyday.  We shall return to find more of Cottonwood’s treasures.