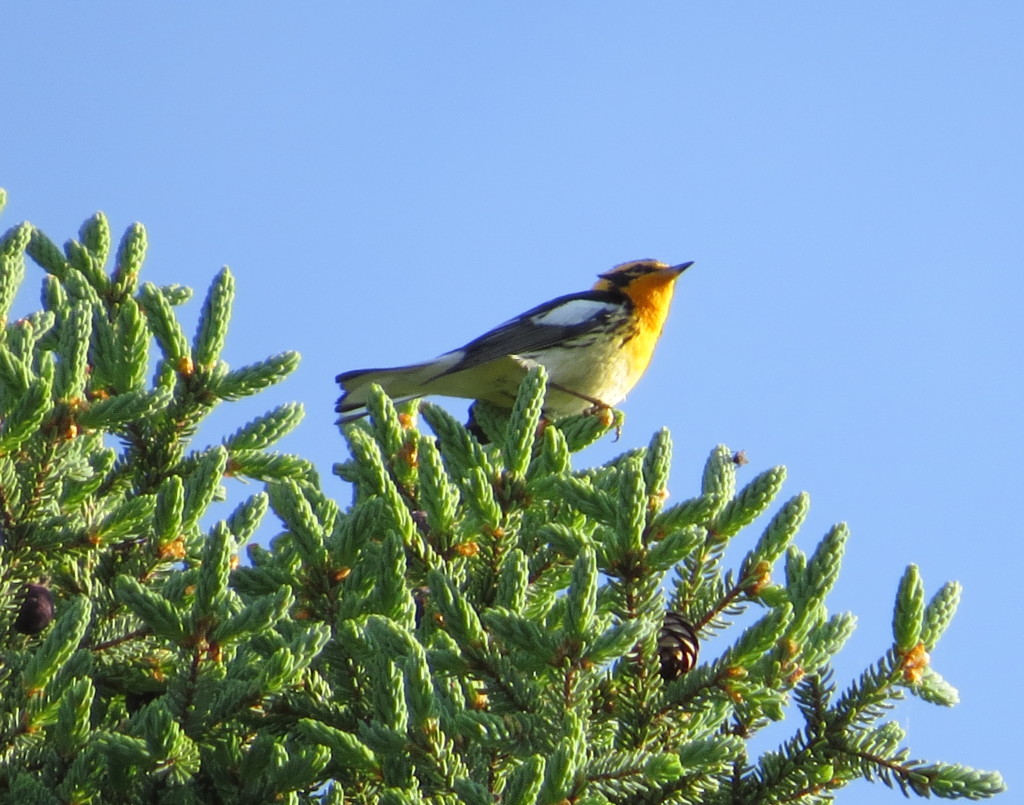 I have been Up North a lot this summer.  This is a good thing. On my most recent trip which occurred just a few days after the Black-backed Woodpecker chase, I got in some really good birding–some of the best I’ve had in northern MN in the summer.  One of several highlights was finding a Blackburnian Warbler on territory and then spending some serious time with just that one bird. It was a great FOY as I missed it during migration, but more importantly, this was my best encounter yet with this bird. Typically when I find them in migration, I have been lucky to get just a couple photos before they vanish forever as flighty, migrant Warblers are exceptionally good at doing. You just can’t beat a cooperative Blackburnian on a sunny day where it belongs–in the Spruces. 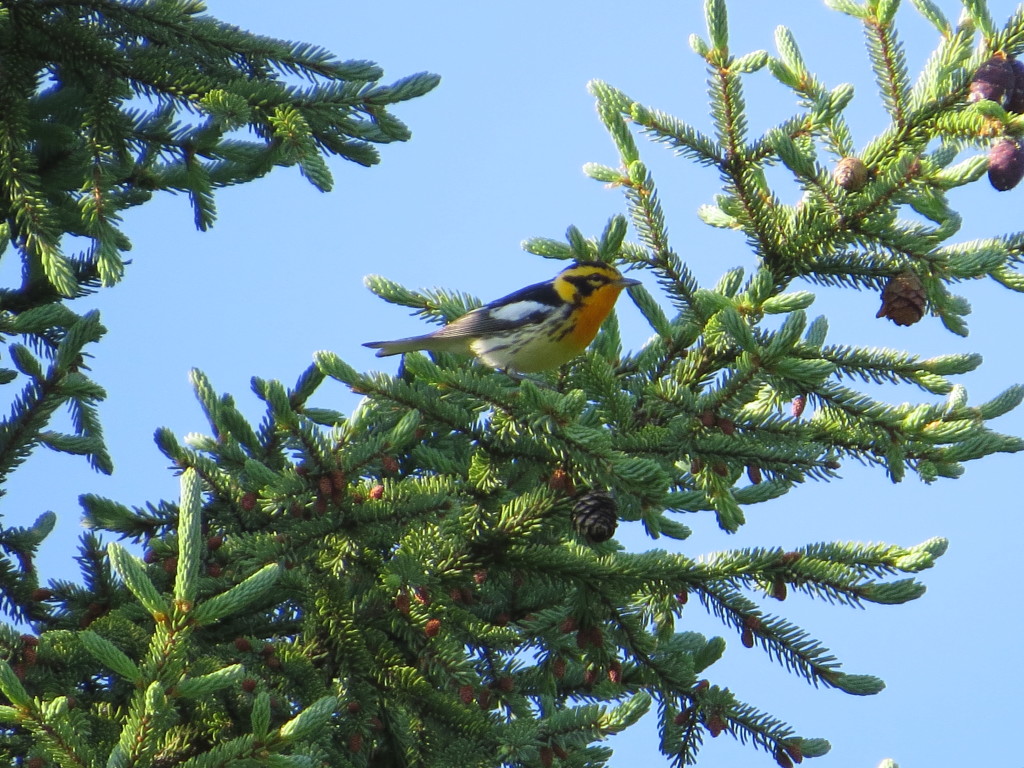 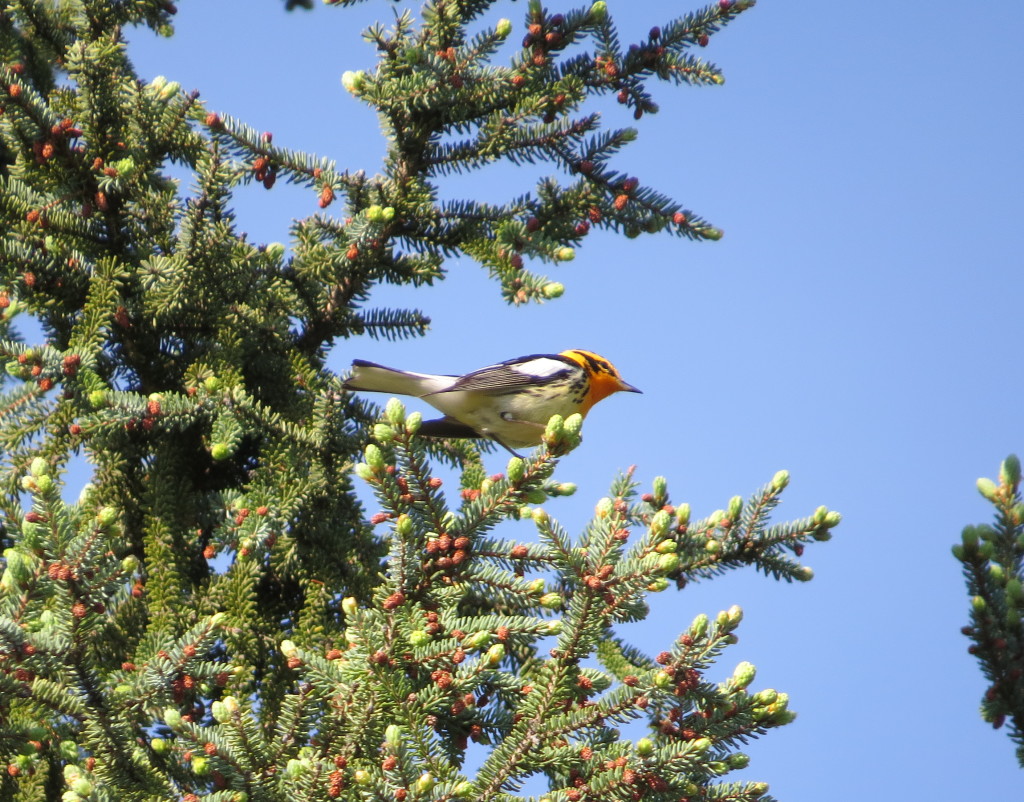 Obviously this bird is stunningly good-looking which puts it near the top of most birders’ favorite Warblers.  It is also one of the first Warblers I saw when my eyes were first opened to the amazing world of this family of birds. Before I ever dreamed up the blog and before I had even seen 100 species, Evan and I took our first ever bird walk with an experienced birder at Bear Head Lake State Park.  This lady spotted a Blackburnian and made quite a fuss over its orange throat, but Evan and I could not see the bird despite her best efforts to describe where it was.  It was excruciating; we’d already gotten a field guide at this point and knew what a face-melter the Blackburnian was. The next day Evan and I went out to look for it on its territory.  I was able to hear it, but it took the Eagle-eyes of a then 5-year-old to pick out the glowing flame from the treetops.  It was a major birding victory early on in our hobby. Finally doing this bird photographic justice on this recent trip was a major victory today and therefore worthy of an exclusive post. 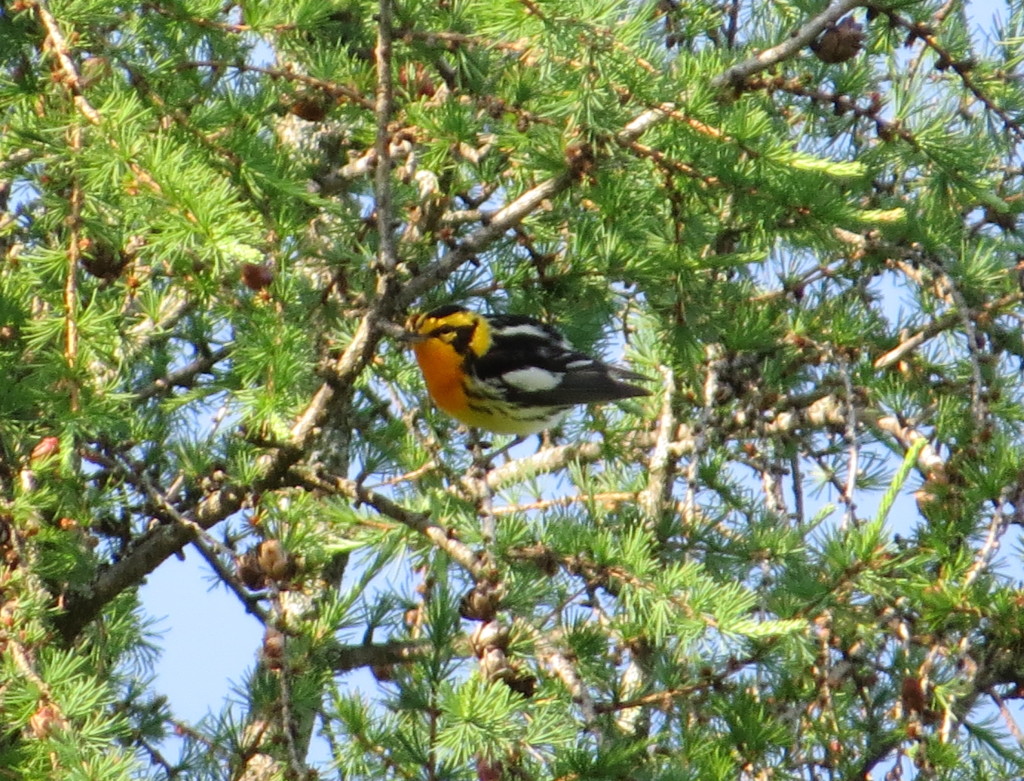 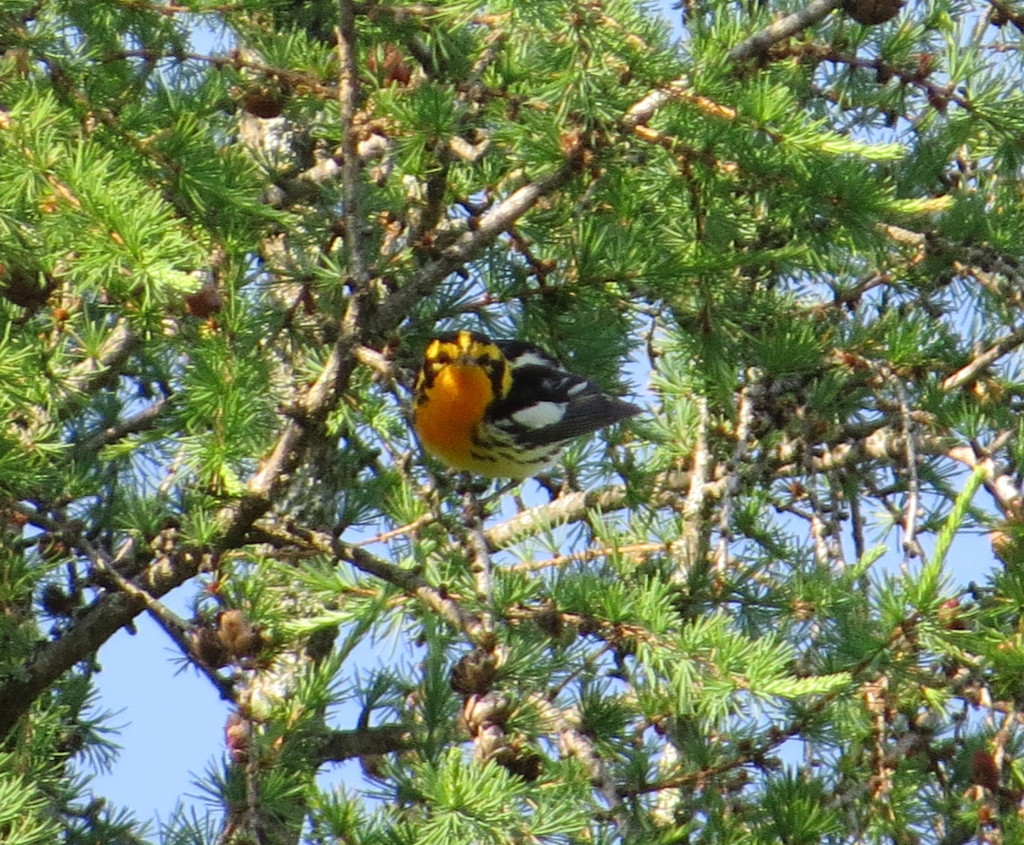 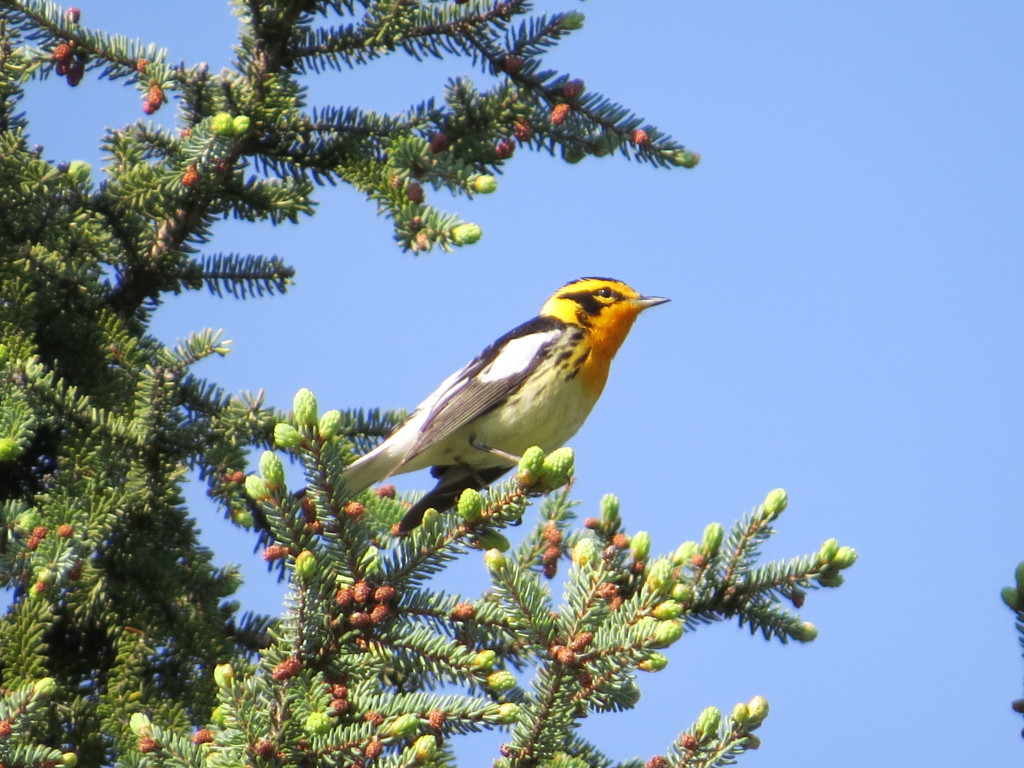 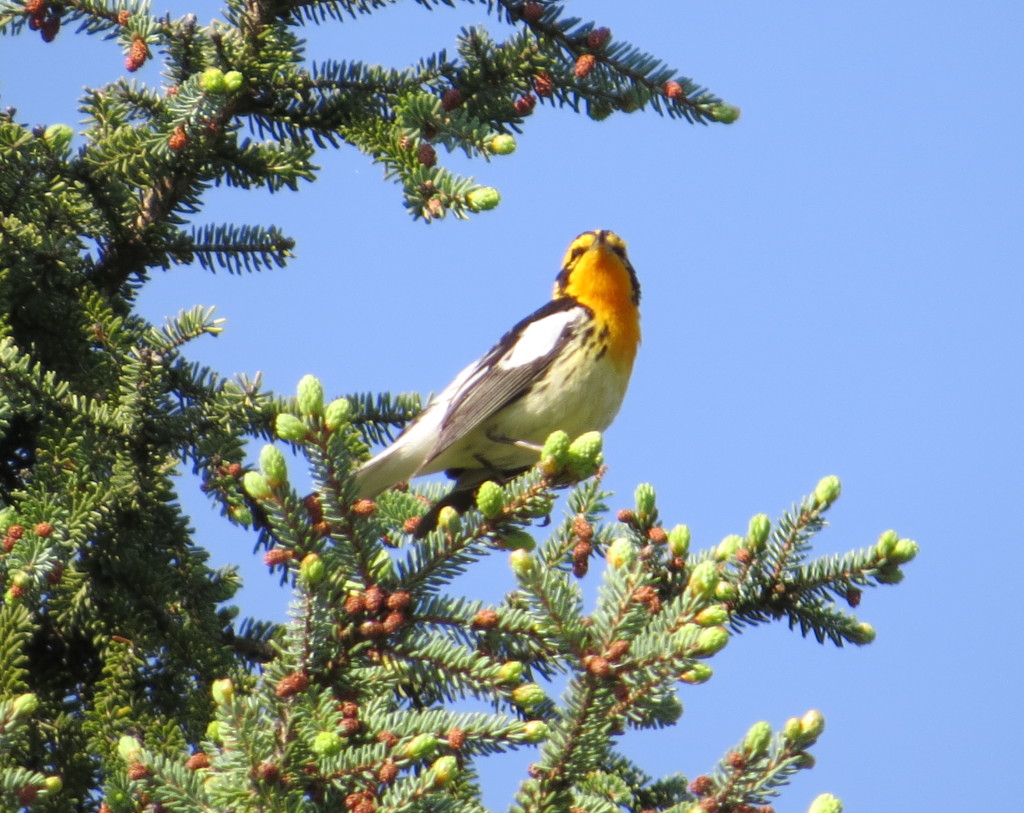 The best thing about seeing a Warbler on territory is that you get to see and hear it do what Warblers do best–warbling. 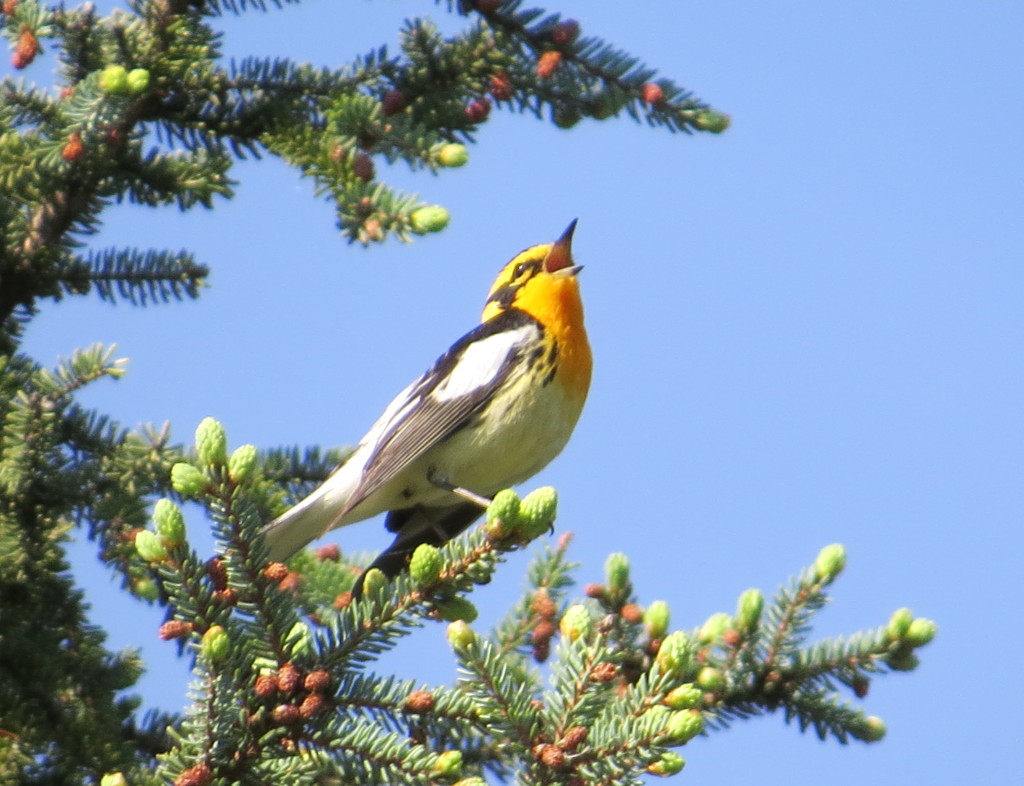 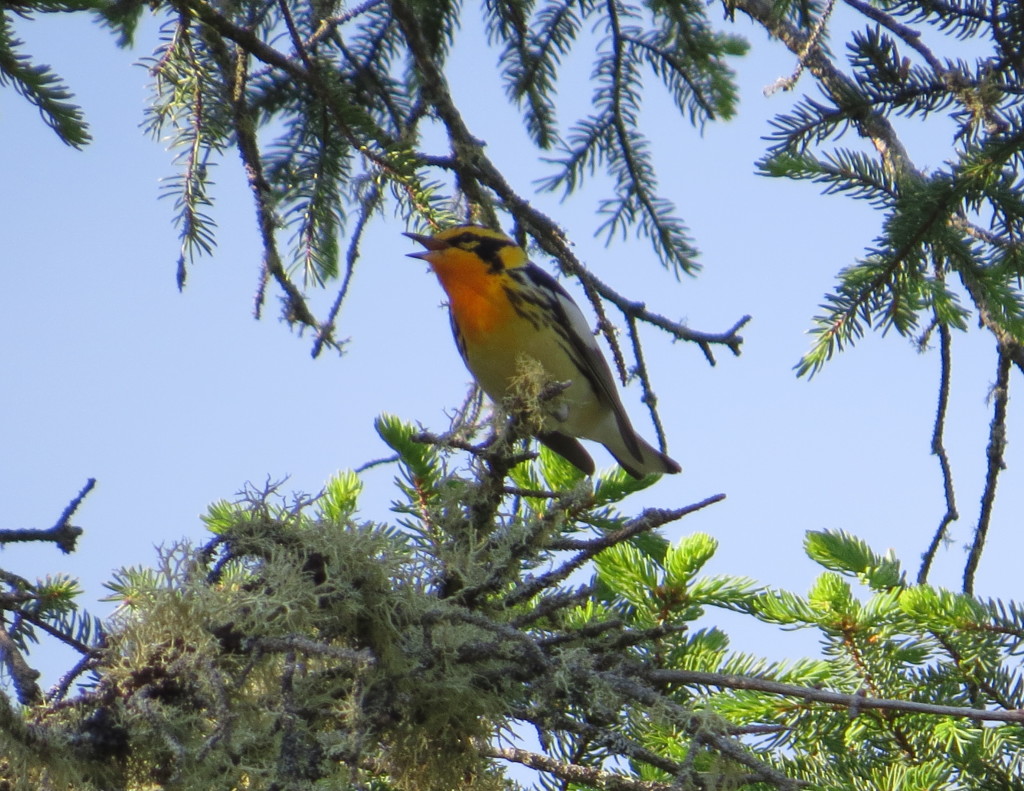 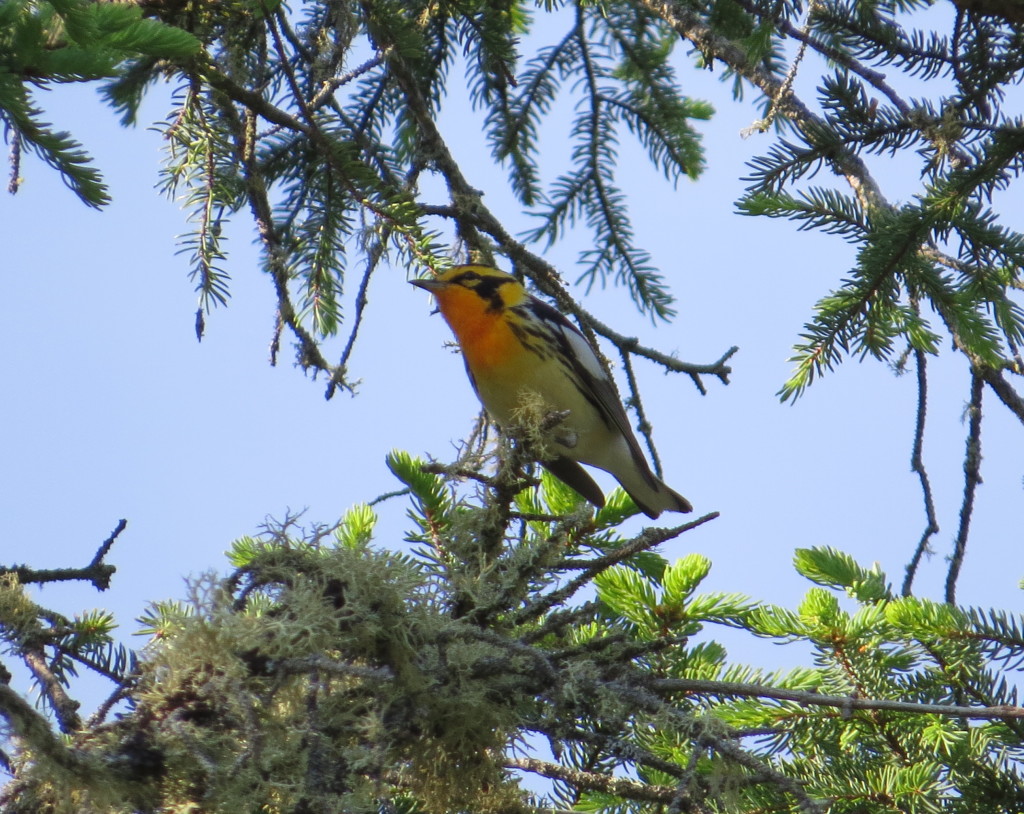 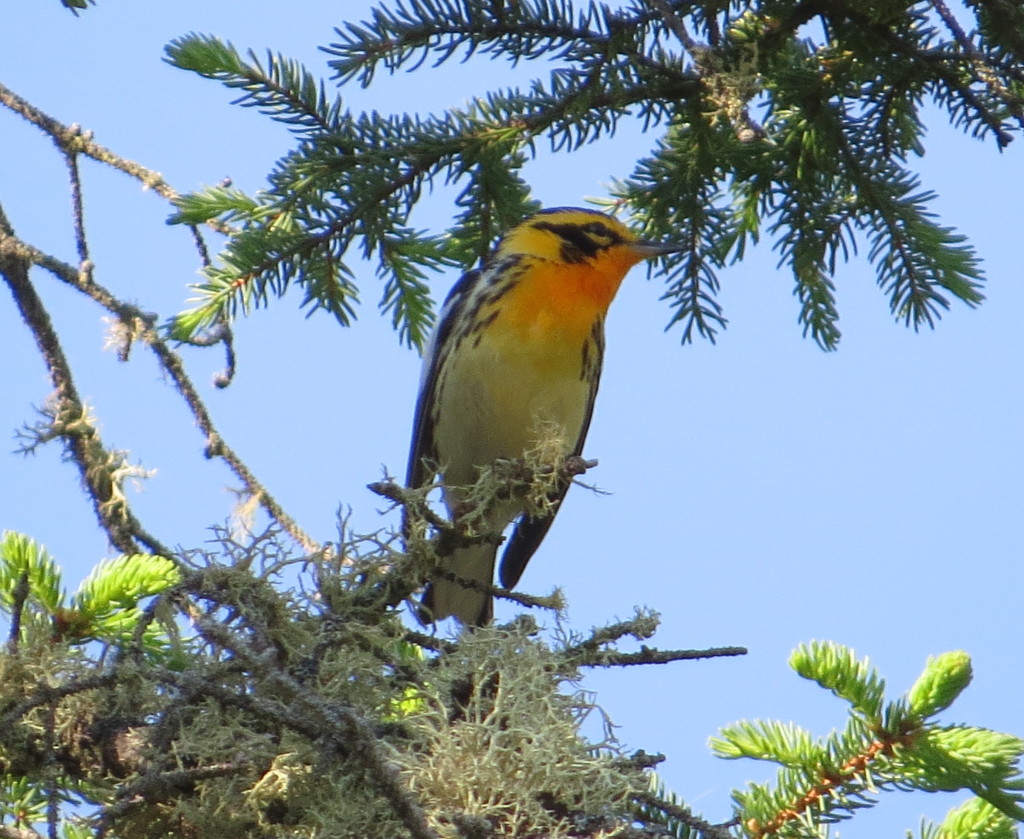 The Blackburnian is a treetop bird. It was nice of him to oblige me by posing low in a young Aspen for a bit.  Another benefit of Warblers on territory not yet mentioned is that they will sit still long enough to get a decent photo. 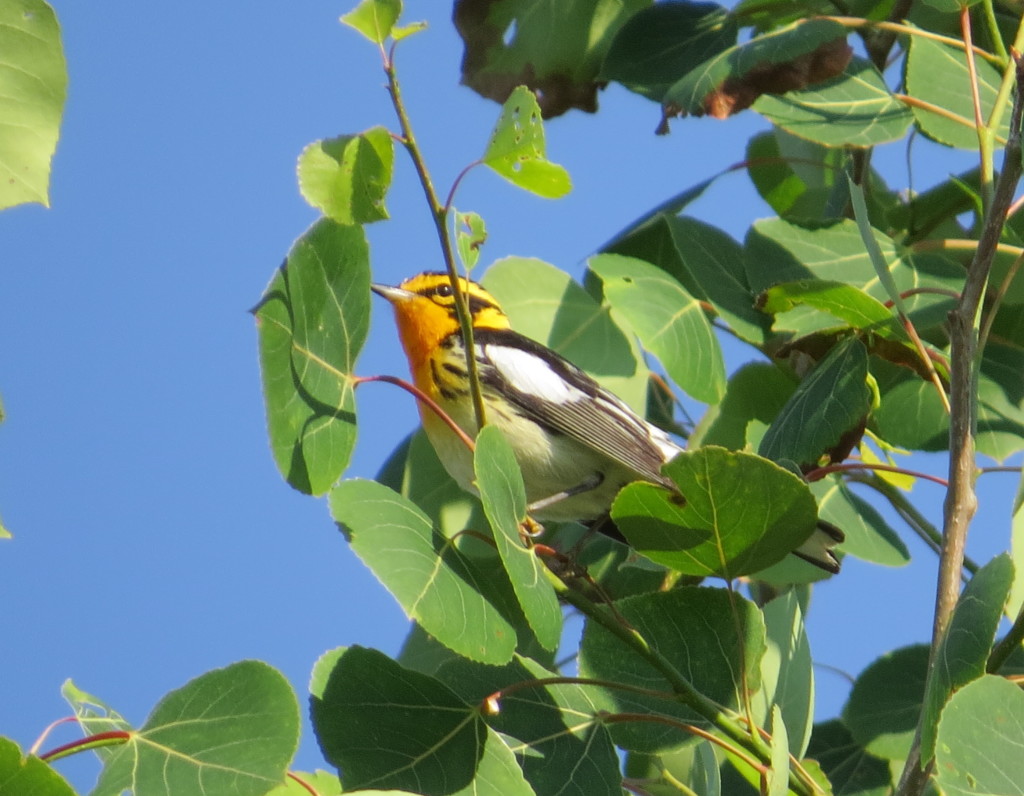 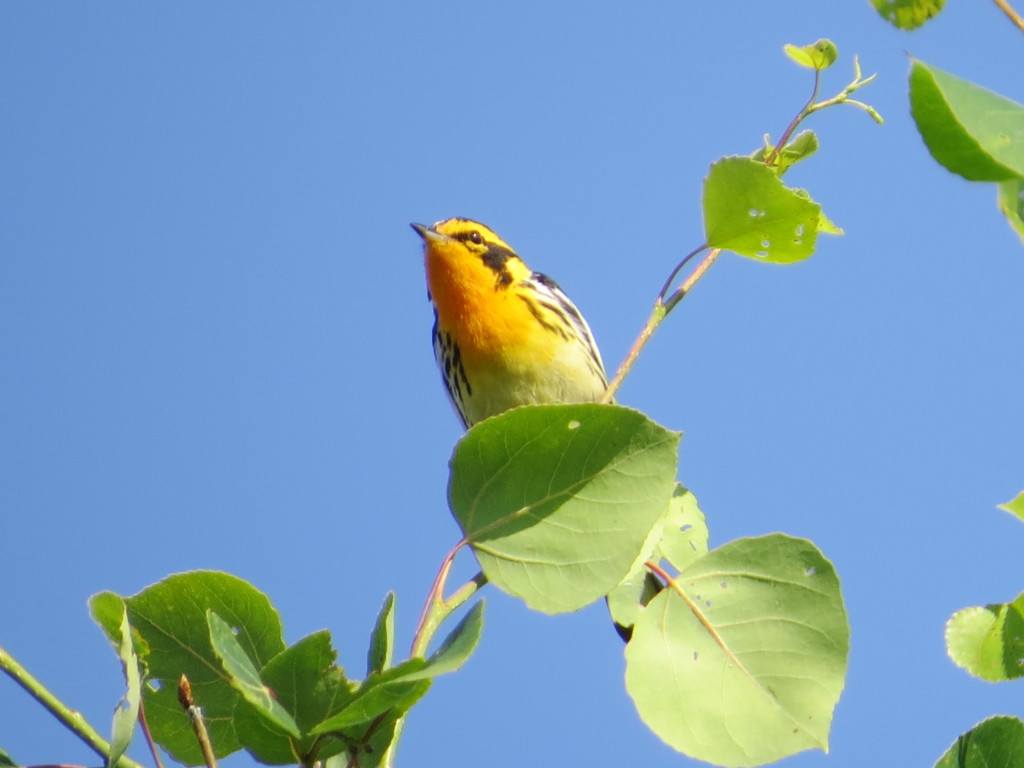 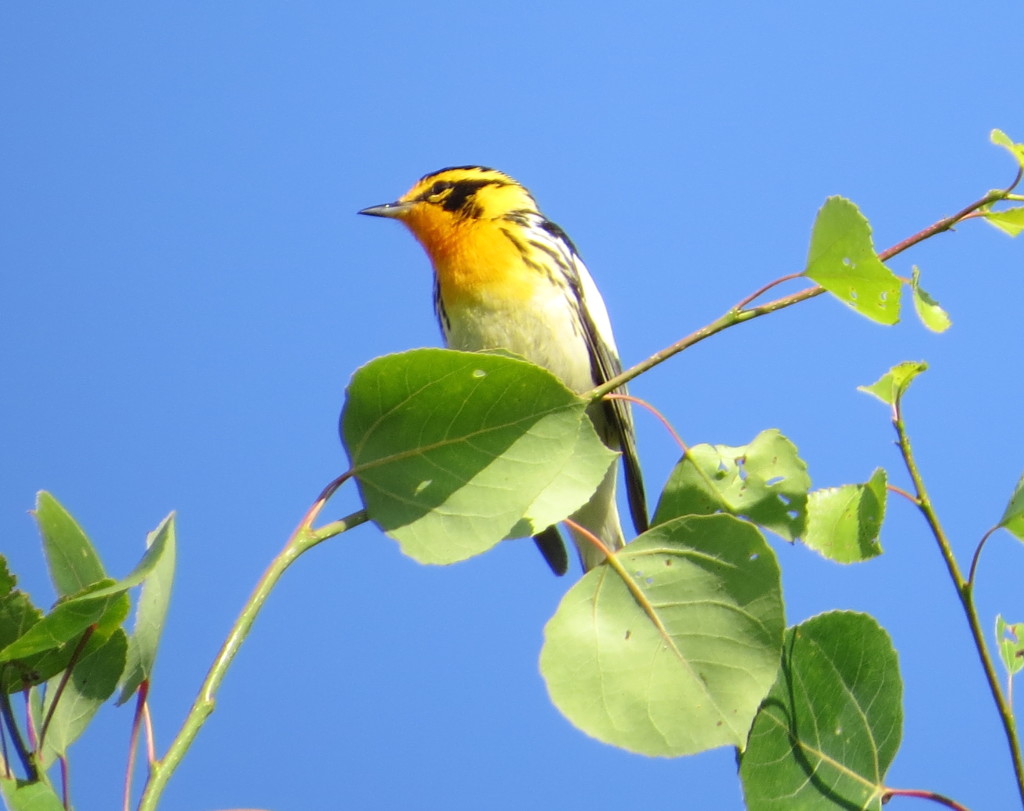 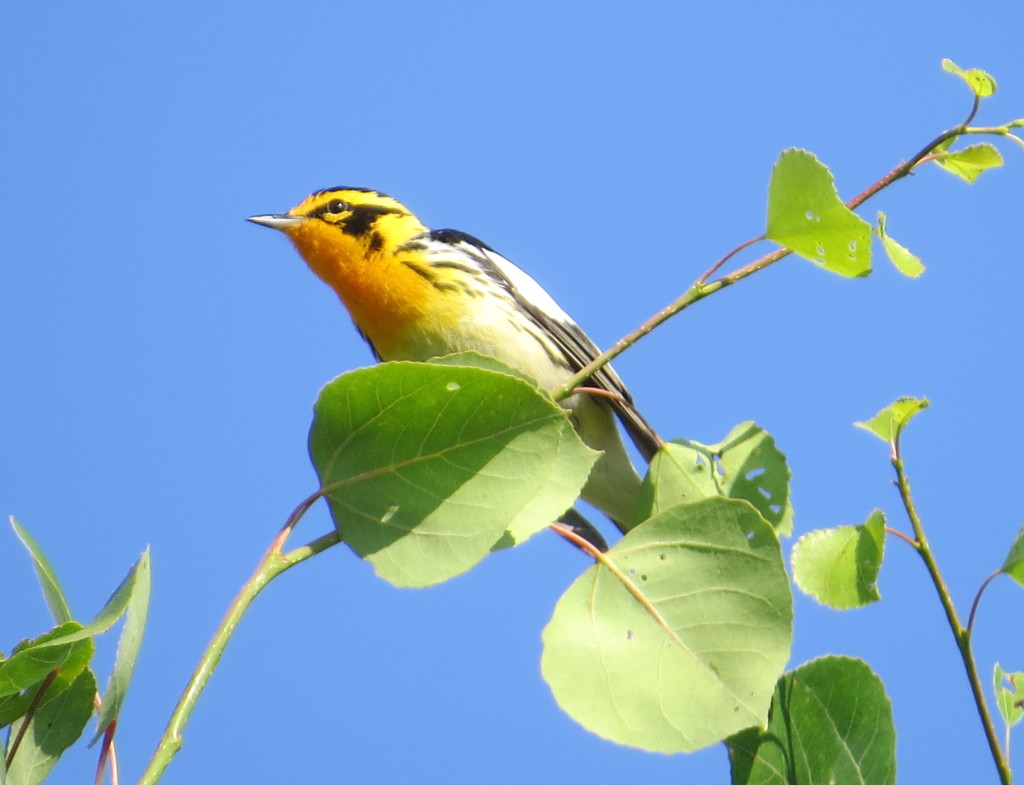 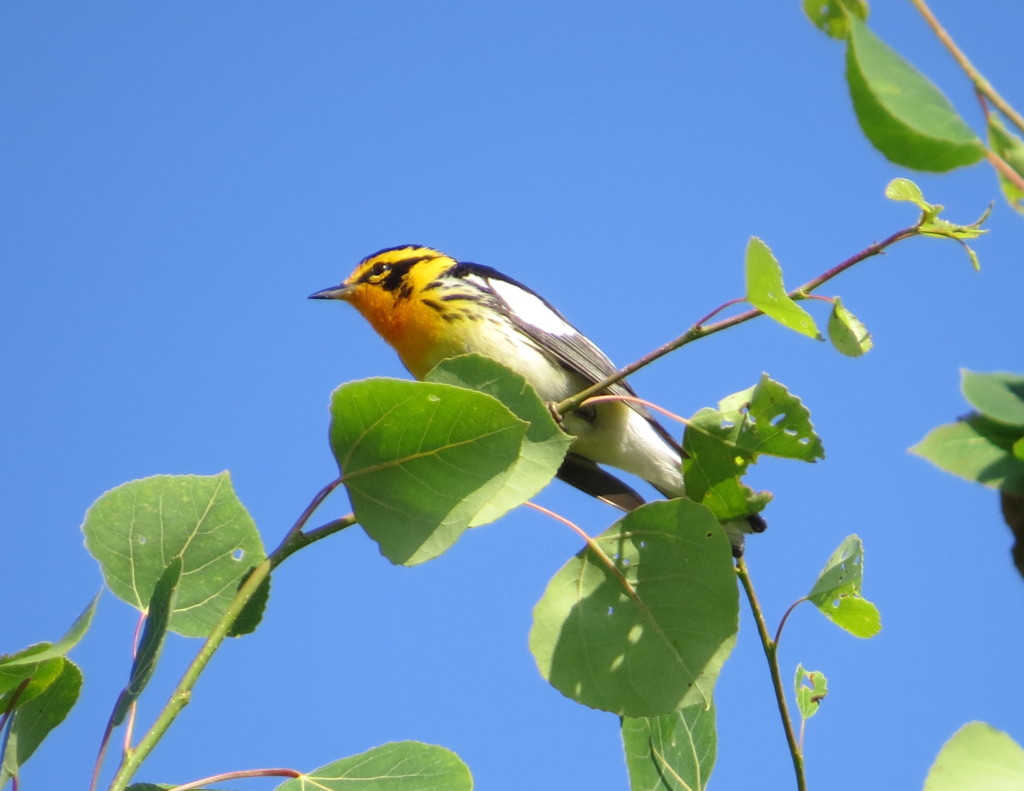 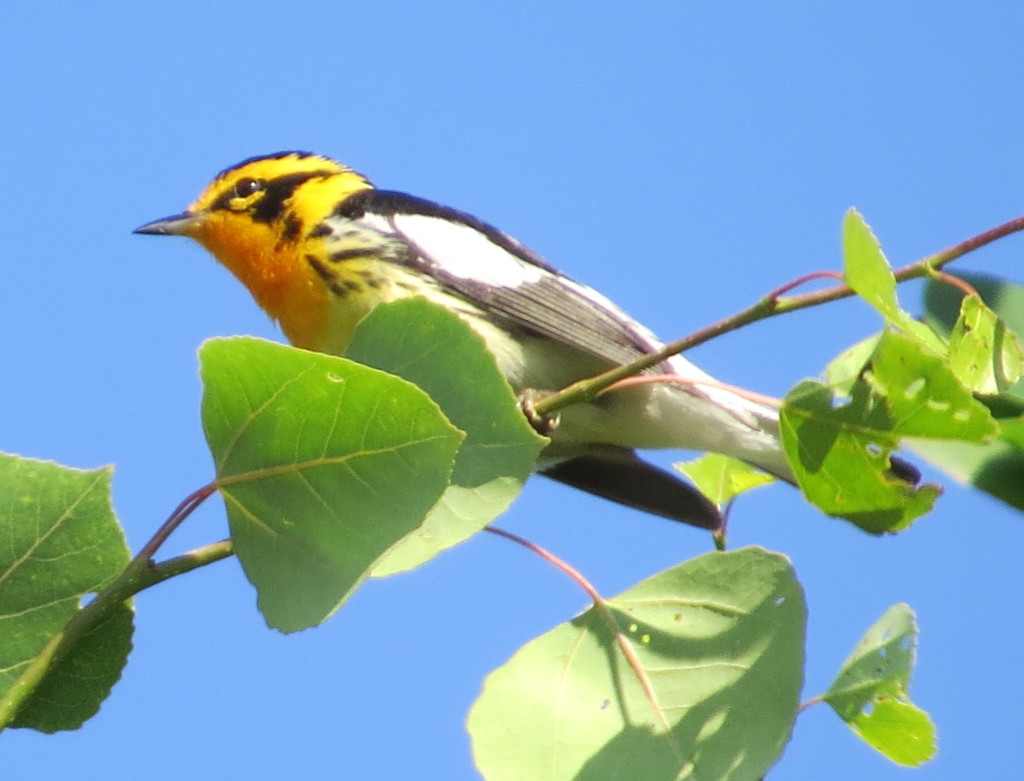 Overkill? Maybe, but my burning desire to photograph one of my top birds has finally been extinguished….until I find another one.

I did see other birds on this trip north–really good birds.  I’ll put those up in the next post.