The post title inspires shivers. For me too, but not for the obvious reasons. Unbeknownst to my birding escorts, Tommy DeBardeleben and Gordon Karre, I had been battling a bad stomach bug for the past 24 hours. One only gets so many chances at SE AZ in life, so I wasn’t going to let a little misery hold me back from birding glory.  Still, at this point in the day, after Mt. Lemmon’s winding roads, never-ending stop-and-go traffic across Tucson, and the sweltering heat, my condition was becoming increasingly distracting. I say this not to win your pity or admiration for gutting it out (thankfully not literally), but to let you know that my enjoyment from Florida Canyon would have to come after-the-fact as in the writing of this post.  So let’s enjoy these great birds together!

Gordon and Tommy were obsessed with the number 4.  They got me four lifers at Cypress and four lifers at Rose Canyon.  Anything less at Florida Canyon would have greatly disappointed them.  They needn’t worry because the lifering was fast and furious in the parking area.  The birds were generally uncooperative for photos, but in minutes I had Broad-billed Hummingbird, Ladder-backed Woodpecker, and Hooded Oriole.  Also, to my delight was a bird I’ve been on good terms with–the Rufous Hummingbird.  This was now my 4th RUHU sighting from three different states in a one-year period. Here’s a shot of the Rufous and my lifer Broad-billed. 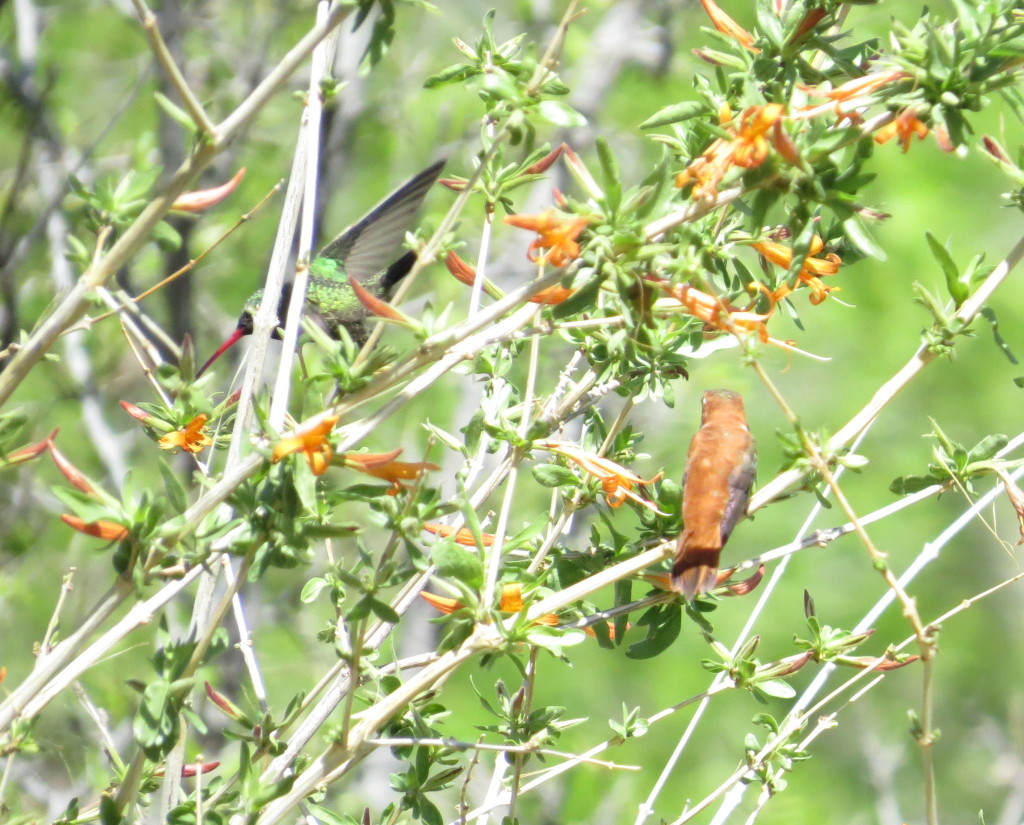 There was too much going on–internally and externally–to worry about good photos, and we had to keep the main objective in front of us–finding an Elegant Trogon that had been reported in recent days in the shady, lower regions of Florida Canyon.  Things eventually slowed down as we scanned carefully for the Trogon.  The secondary lifering now came at a nice, steady pace.  Lucy’s Warbler clinched the coveted #4 spot for this third stop of the day. 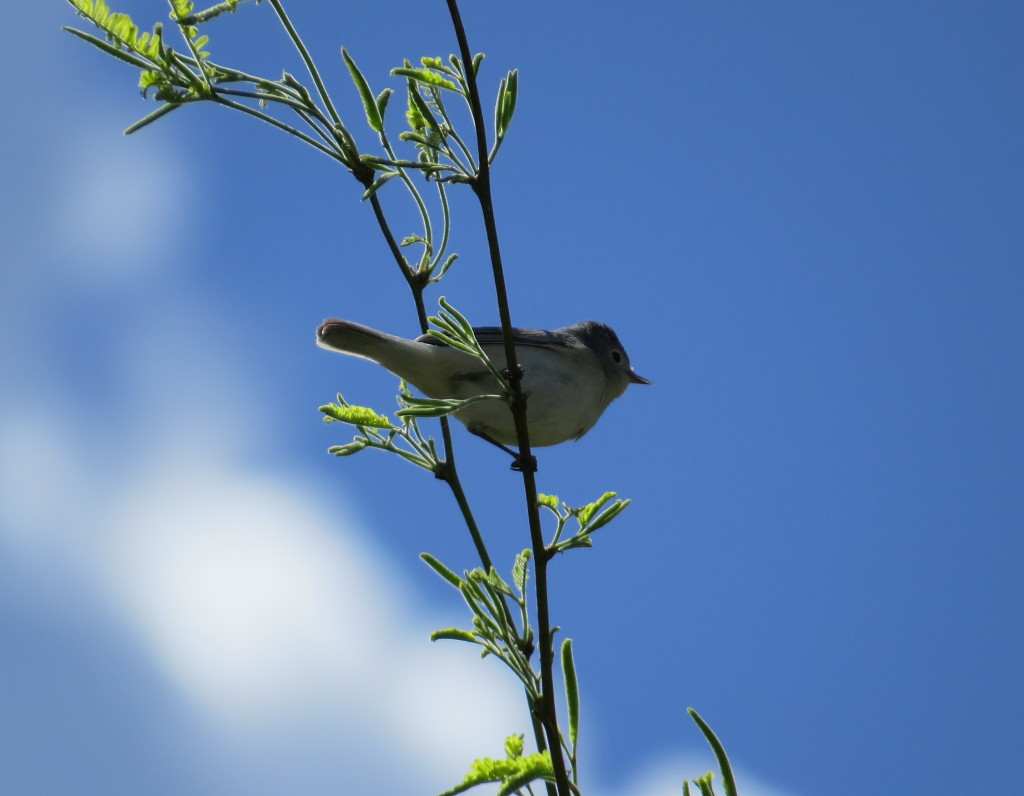 No longer a lifer, this male Broad-billed Hummer was still stop-and-look worthy as it offered up some better photo-ops. 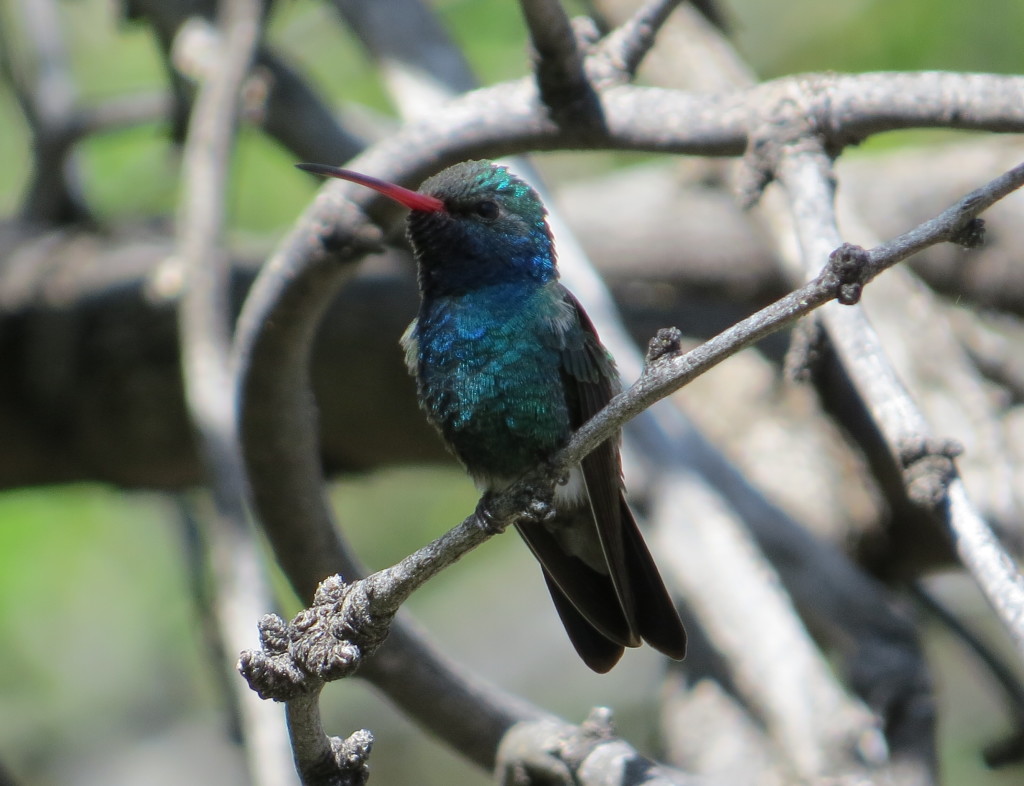 Here you can see why it is so named. 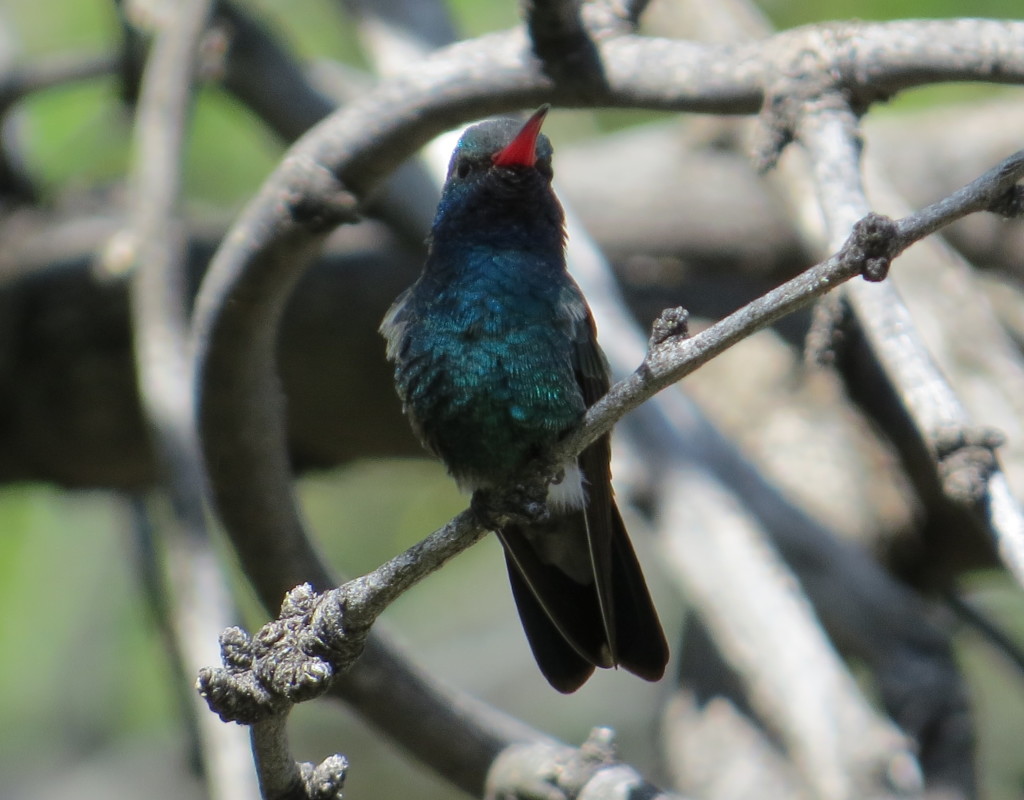 A bland lifer that popped up next was the Dusky Flycatcher.  For this ID, I am totally relying on my birding companions. I have no pride when it comes to empid identification of either the eastern or western variety. 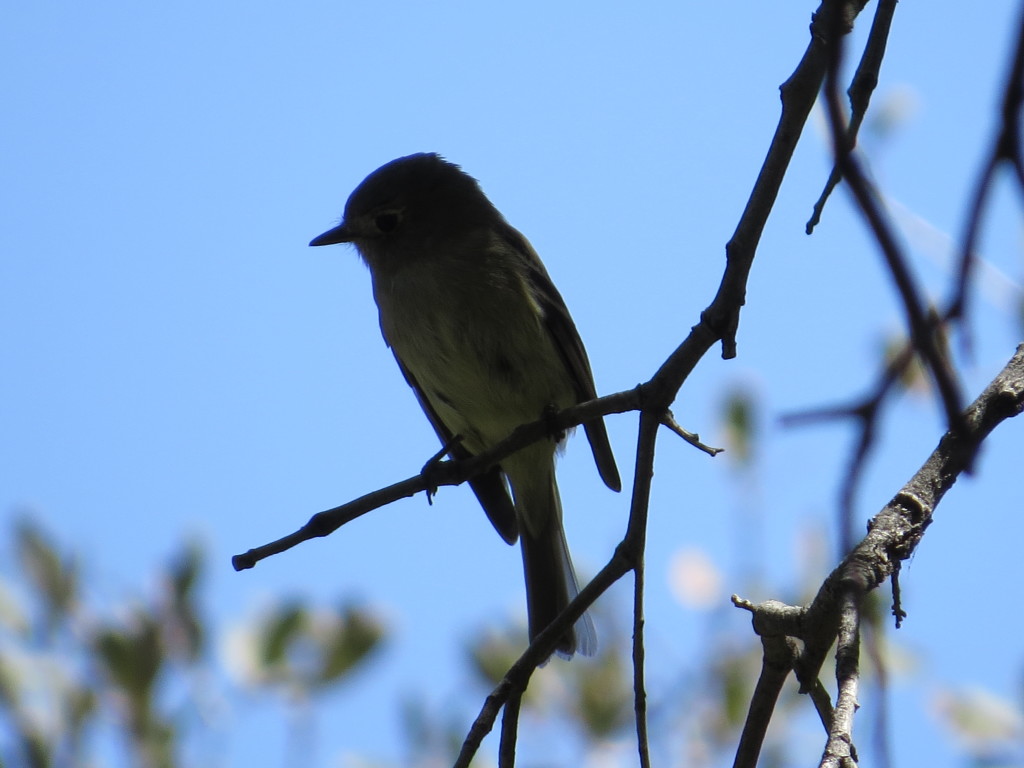 As we ventured further up the canyon, the shady trees and our Trogon hopes were disappearing.  The only reason to push on through this now shrubby and hot valley was to look for the brush-loving, prized birds that have made Florida Canyon famous–the Rufous-capped Warblers.  Alas, it was not meant to be on this trip.  Tommy and Gordon shared how it often takes birders several attempts to get this prize.  I wasn’t disappointed; it’d already been a fantastic morning at Mt. Lemmon and now Florida Canyon.  Plus there were some more lifers and photo-ops to be had as we pursued the Warblers. The perky Ash-throated Flycatcher was surprisingly fun for being a bland-colored bird. 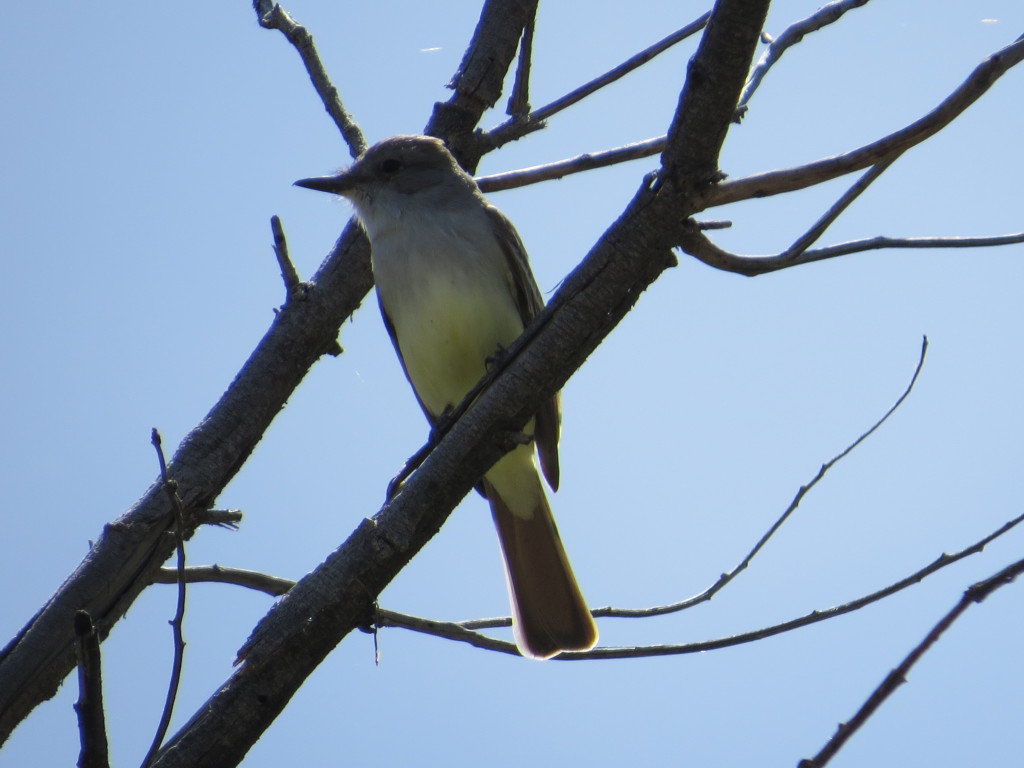 The Canyon Towhee, on the other hand, was a bit haggard and answered the door in his 5 O’Clock shadow, tank-top, and boxing shorts.  At least it showed itself.  Thanks for nothing, Bell’s Vireos. 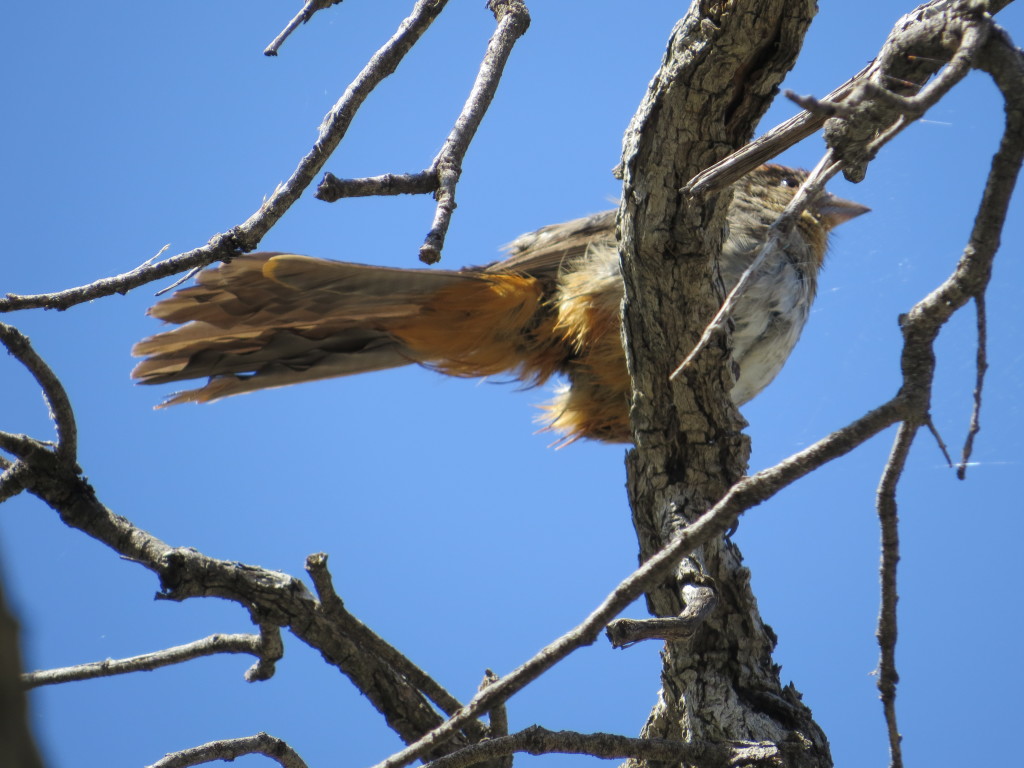 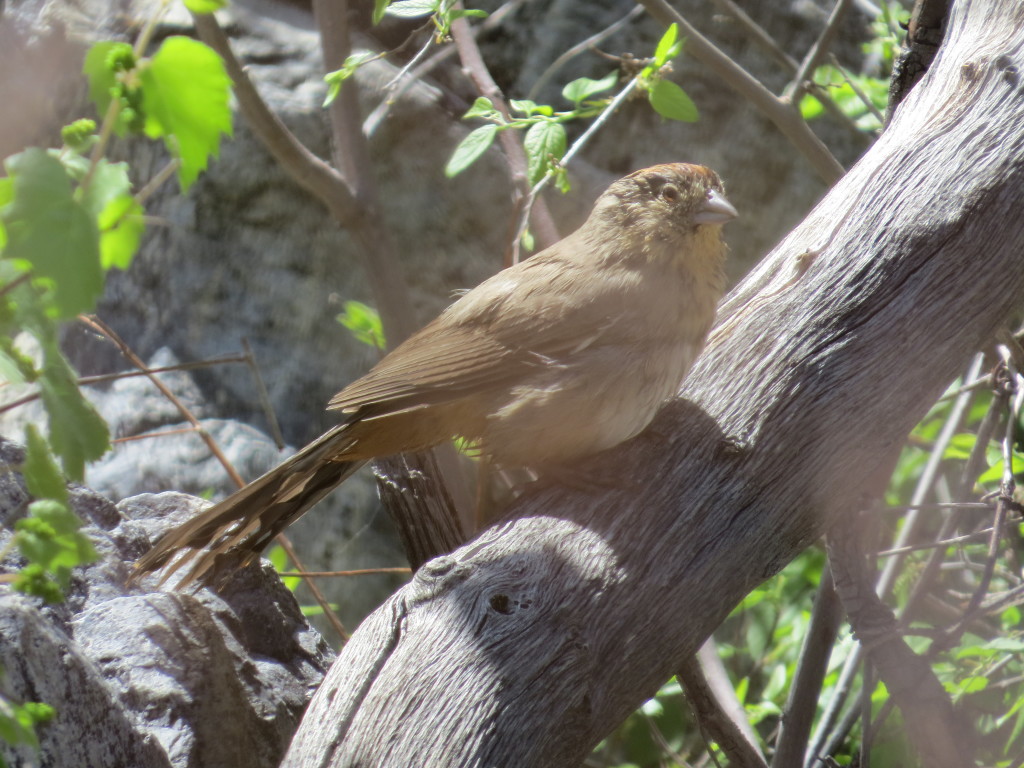 A much more accommodating Hooded Oriole posed for some photos. 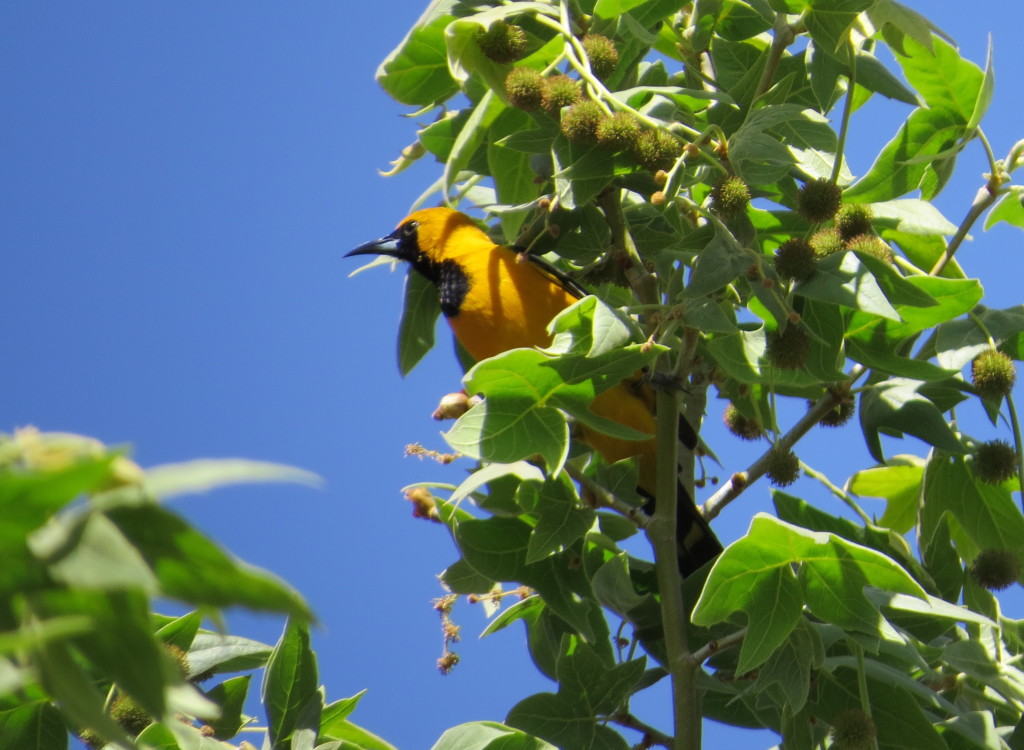 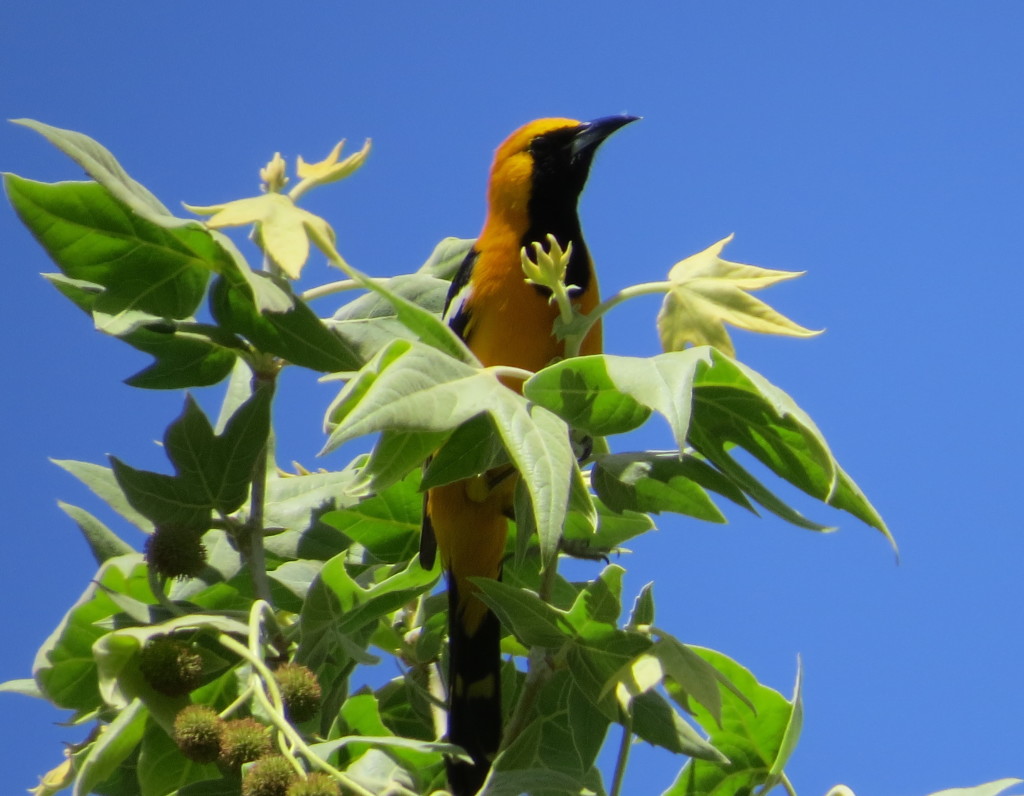 Eventually we turned around and began hiking back down Florida Canyon, a quicker leg of the trip since the birds were now old-hat.  Except for Broad-billed Hummingbirds.  They demand your attention and look different at every turn. 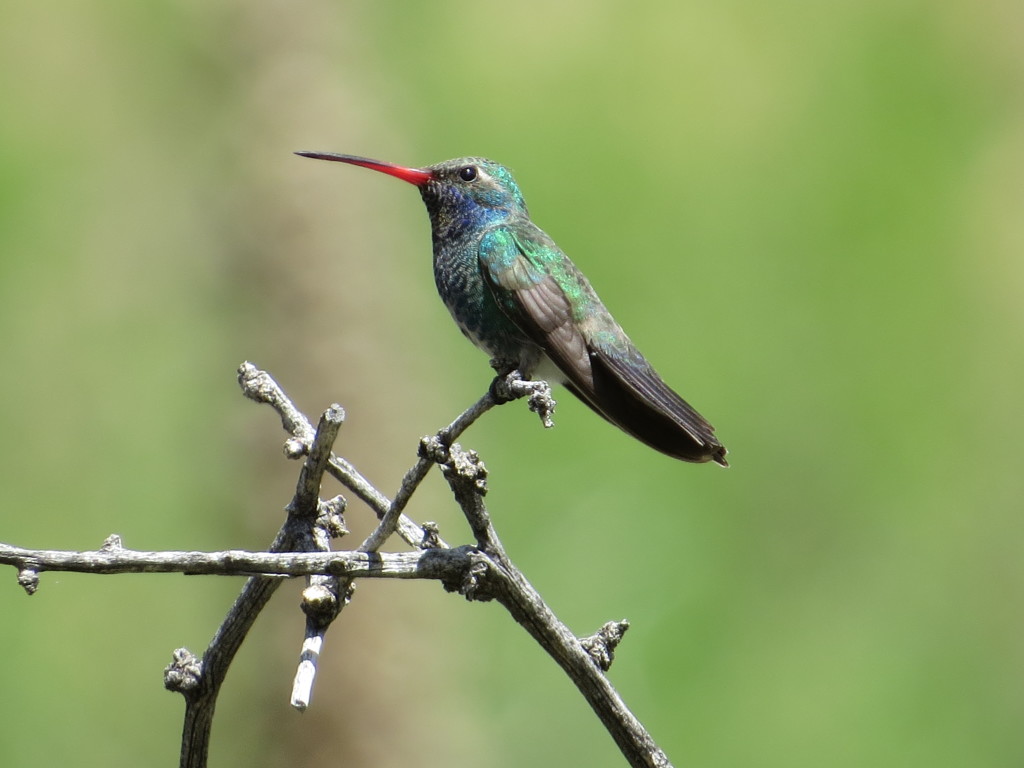 Around this time I spotted a small, gray bird in a shrub.  Tommy quickly got on it right away and excitedly announced it was a bird whose name-length belies its size– the Northern Beardless-Tyrannulet. The Tyrannulet turned out to be two such birds and both gave fantastic views.  Tommy and Gordon were beside themselves with glee.  Though it’s small, though it’s gray, this bird is not often seen.  Their reaction made me appreciate this lifer and these views even more.  It was a neat, little bird for sure. 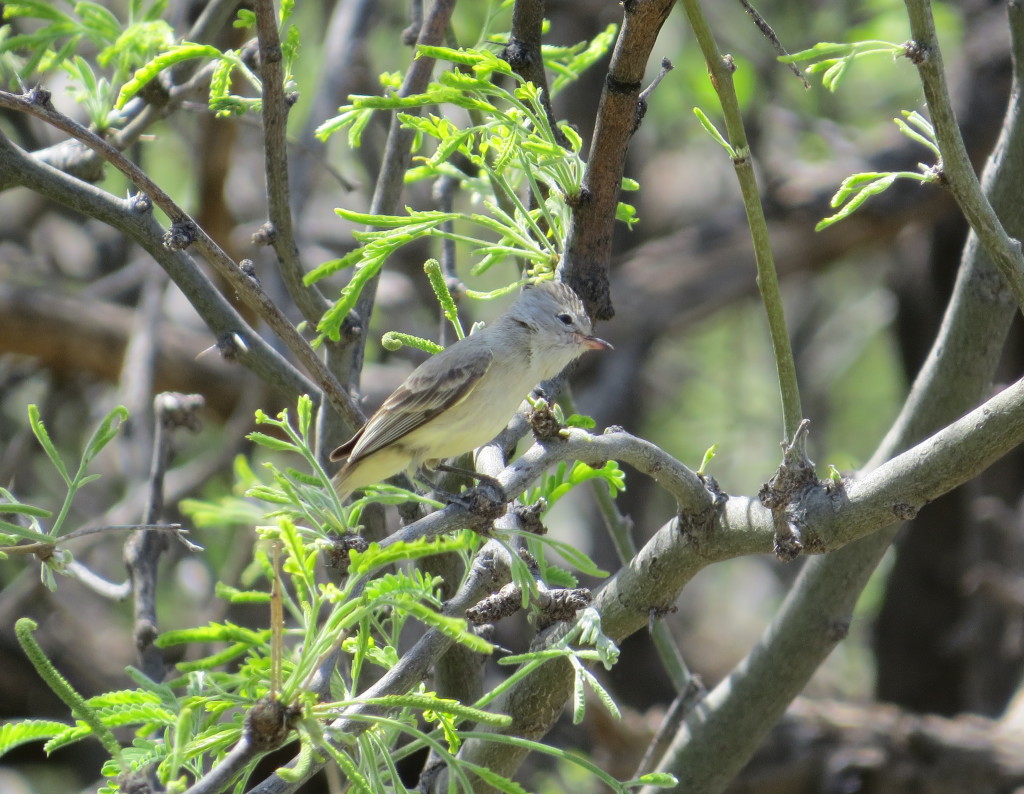 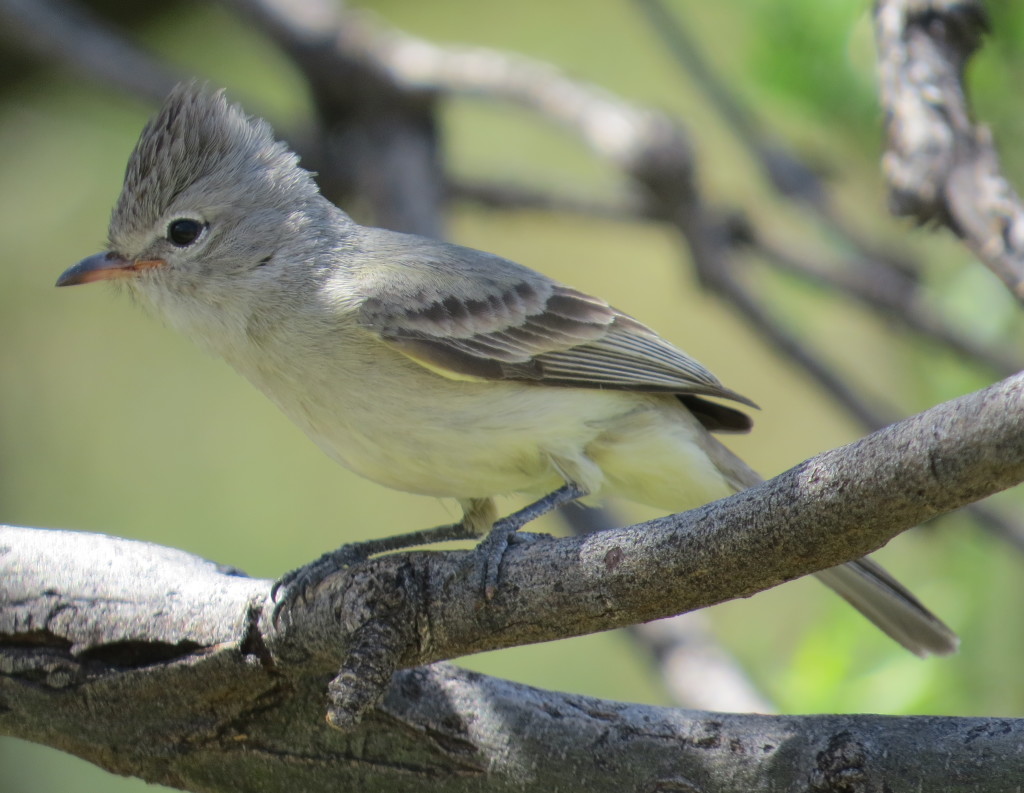 Venturing back through the taller trees we were now in Trogon-mode again.  Alas, it was not meant to be, but Gordon and Tommy found me another big target of mine for the trip, the Black-throated Gray Warbler!  In true warbler fashion, it did not offer up great views.  This was my only look and photo of this bird. 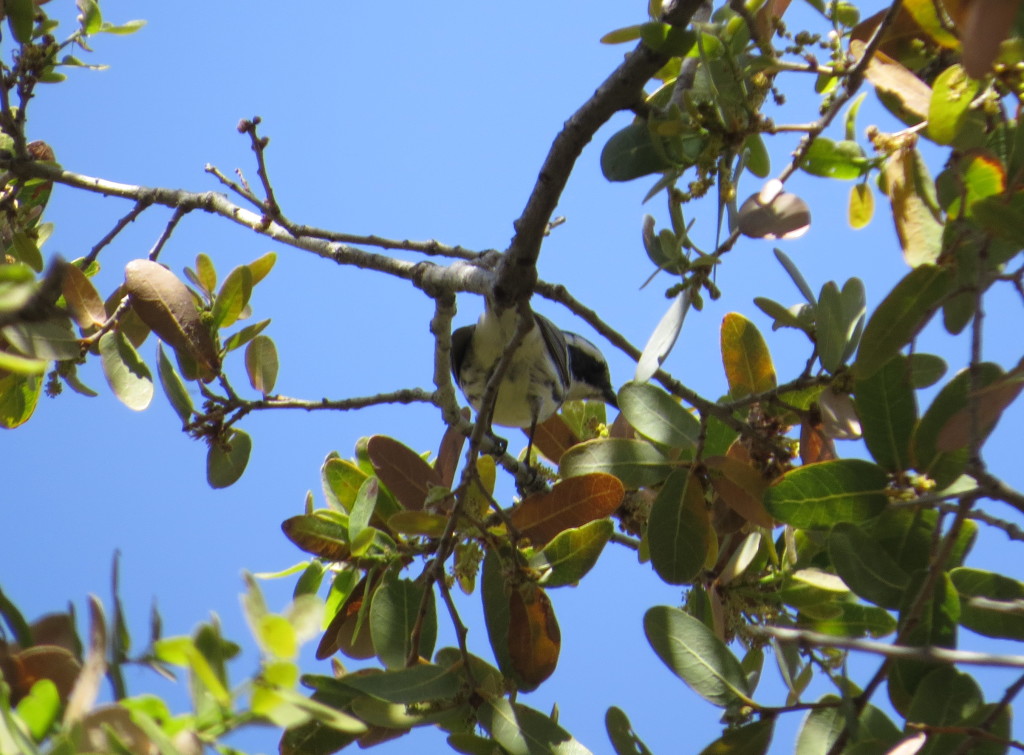 I would have liked to try harder for a better look, but we had to keep our priorities straight.  Trogon-less at Florida, we had to make it over to Madera Canyon for another try.  I shall return for you Mr. Black-throated Gray!

Despite our to desire get back onto nausea-inducing roads and into more Trogon habitat, there was time for me to finally get a decent look at a Lesser Goldfinch, a bird I had seen briefly in Colorado last summer. Anyone who doesn’t enjoy LEGOs, whether that be the brick, waffle, or the bird, is crazy.  Greater Goldfinch sounds like a more appropriate name. 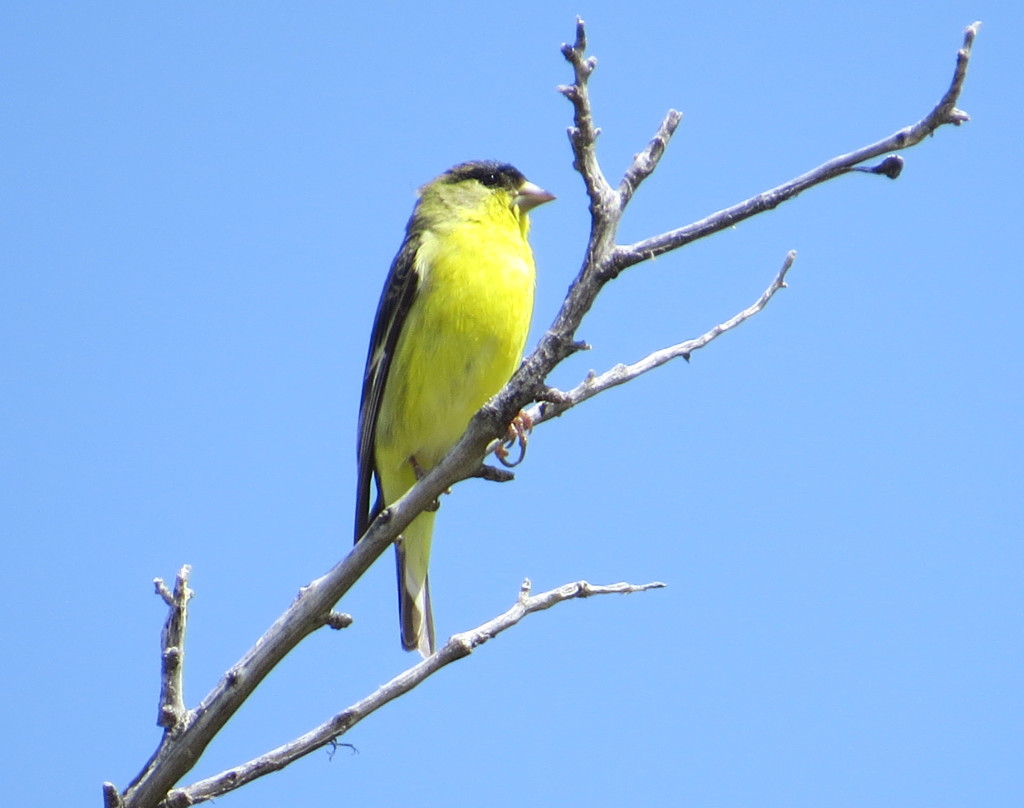 As we were pulling out from Florida Canyon, Tommy heard another lifer out the car window–the Rufous-crowned Sparrow.  It wasn’t the red-headed bird we came for, but I’ll take it! 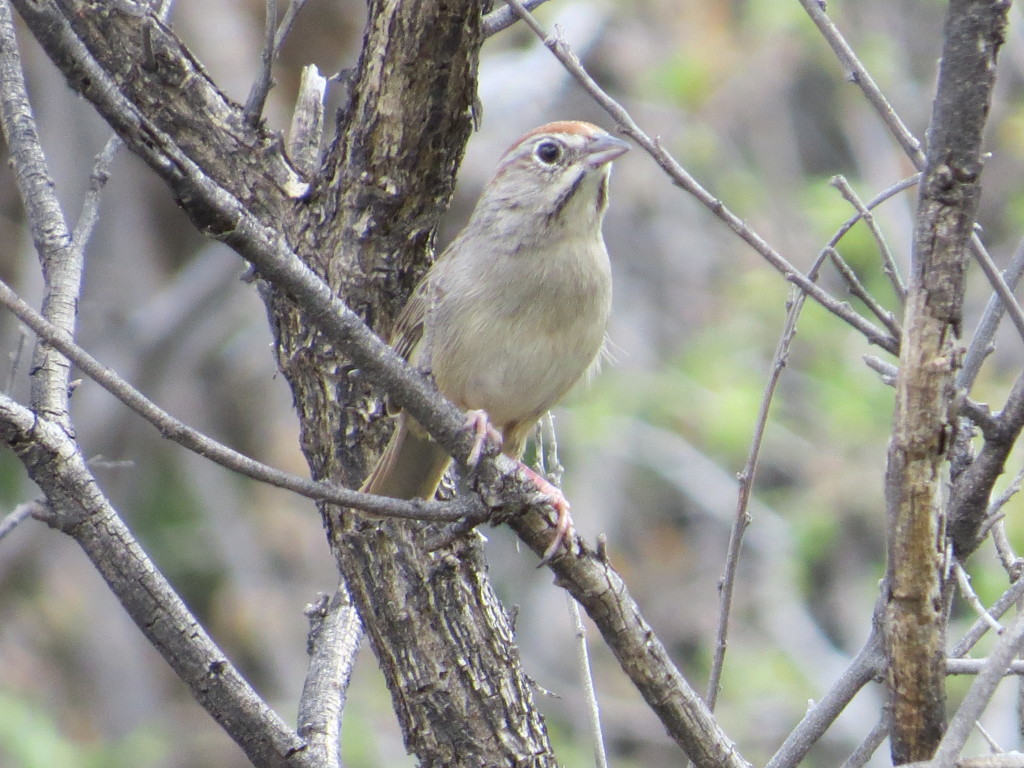 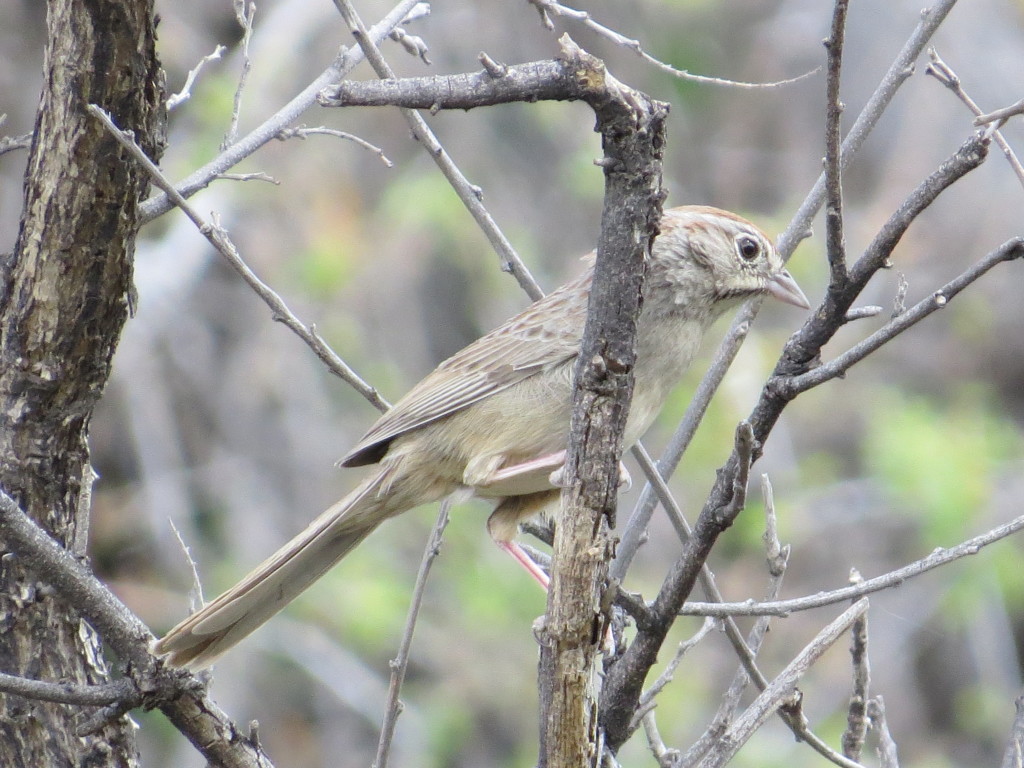 We blew Tommy and Gordon’s hopes of four lifers out of the water as we left Florida Canyon with 10 new birds: Ladder-backed Woodpecker, Broad-billed Hummingbird, Hooded Oriole, Lucy’s Warbler, Dusky Flycatcher, Ash-throated Flycatcher, Canyon Towhee, Northern Beardless-Tyrannulet, Black-throated Gray Warbler, and Rufous-crowned Sparrow.  That brought the morning’s tally to 18 life birds.  Now it was on to Madera Canyon for an hour of birding before I would be joining my family at Green Valley.  And that wee little hour was enough for its own blog post–that’s how good Madera Canyon is.