2015 wasn’t supposed to include a Colorado trip.  After our visit last summer, I wasn’t planning to go back for a long time. Life had other plans as it so often does, and on May 29th I found myself on an airplane heading back to Colorado to say a final goodbye to my Aunt Carol who lost her fight with cancer.  This mountain valley had now lost some of its beauty and charm. 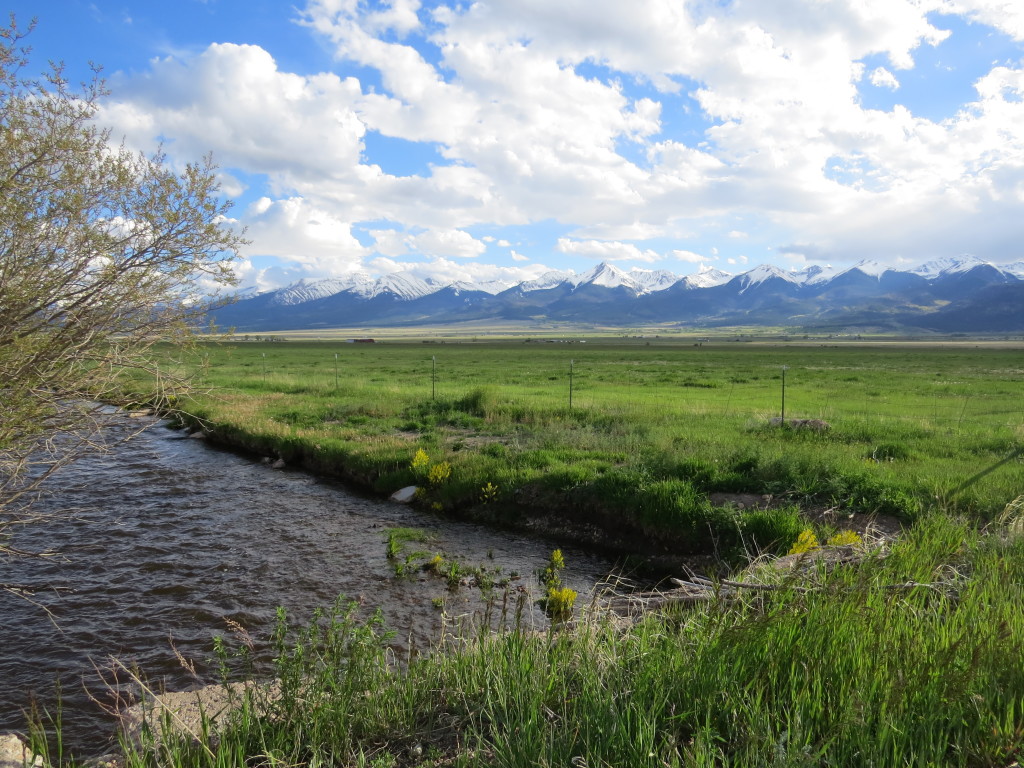 Aunt Carol meant a great deal to many, many people.  I have many fond memories of staying at Uncle Jon and Aunt Carol’s house as kid and then visiting them a few times as an adult.  She had a zest for life and was always game for something fun and spontaneous, especially if it involved having a good time with people she loved. In these ways she embodied the things I enjoy most about birding.  Speaking of birding, Aunt Carol has always been a big fan of birds. Long, long before I was a birder, I remember her raving about the beauty of the Rose-breasted Grosbeaks that would visit their Minnesota home.  I remember thinking that was something I had to see. 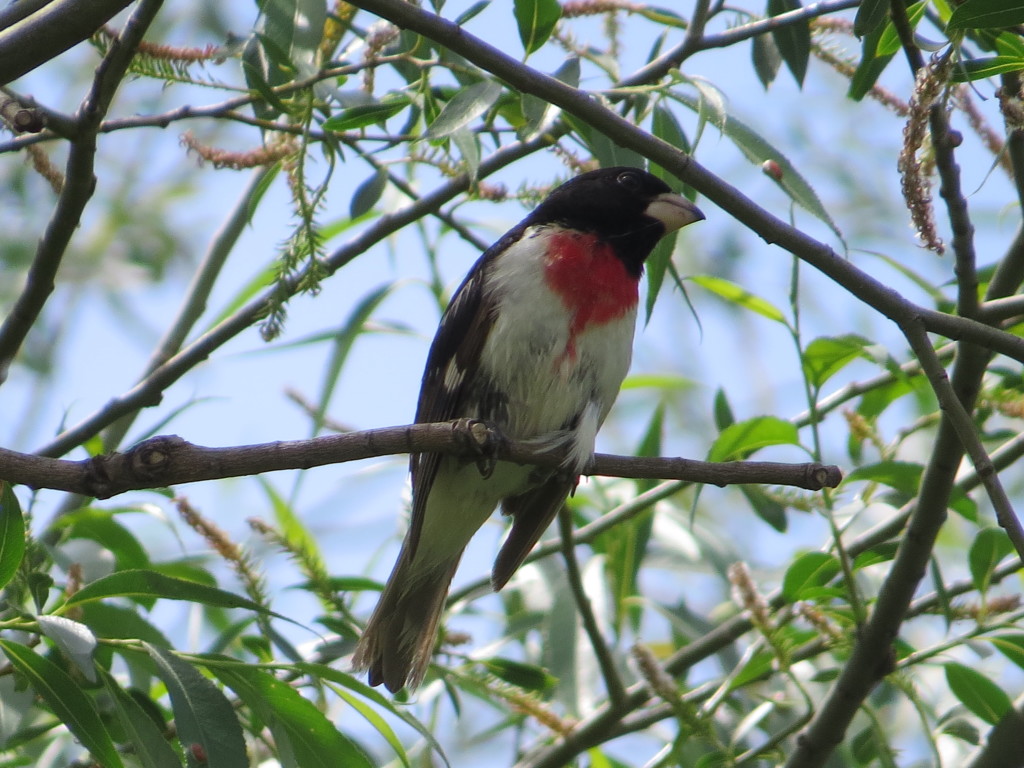 In her Colorado home, Aunt Carol spoke fondly of the Mountain Bluebirds which are common at their mountain residence. Carol had quite the special relationship with these birds as a pair would nest right outside her bedroom.  Last year she showed us how she could give a whistle and the male would fly in.  It was pretty neat. 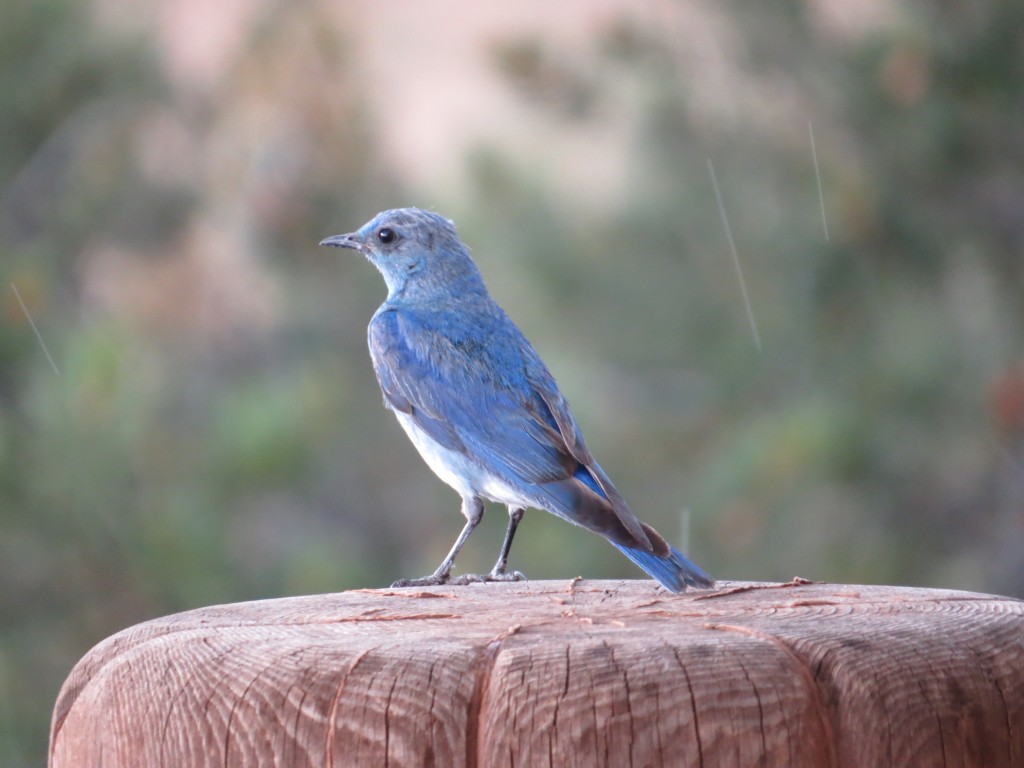 On this trip to Colorado my cousin Danny pointed out decorations Carol put on her patio doors to help these Bluebirds avert window strikes.

Another bird that reminds me of Aunt Carol is the Bushtit.  Last year she got quite a kick out of the bird’s humorous name, laughingly saying, “I think I’d like to see some of those Bushtits for myself!” 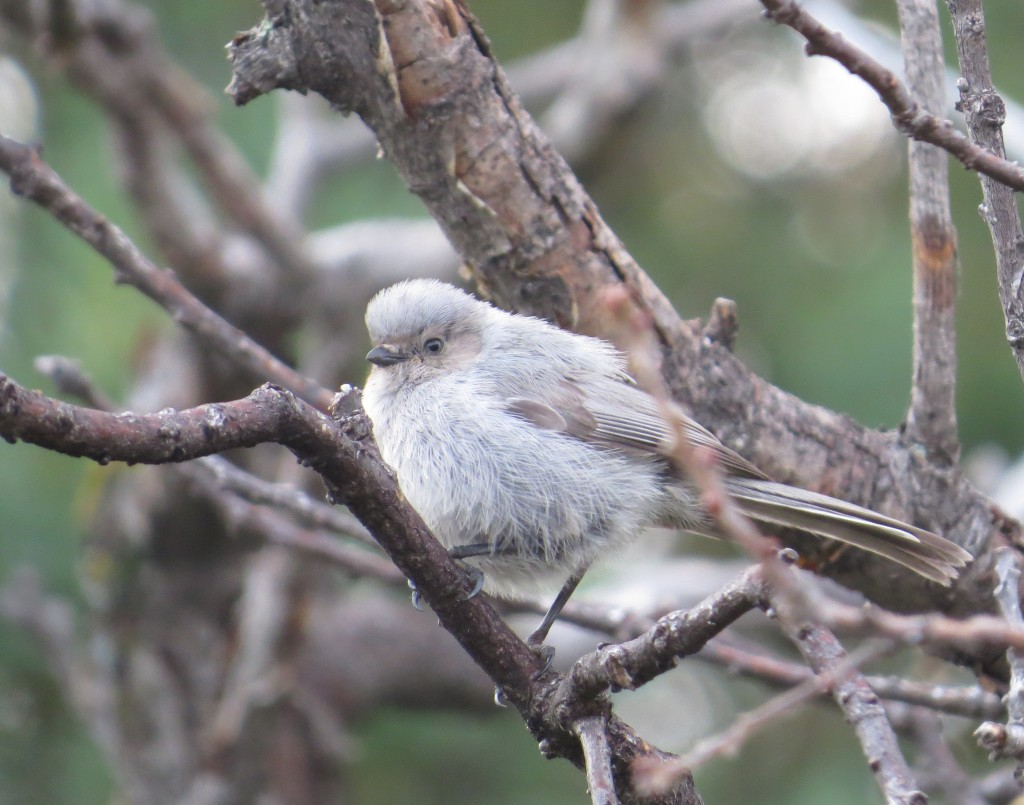 This trip was not a birding trip, but you can’t go to Colorado without seeing cool birds.  Since we were flying in late at night on a Friday, busy with family most of Saturday, and flying home around noon on Sunday, there was only the slightest of margins to see these birds. However, don’t confuse birding the margins with marginal birding.  Regardless of one’s time budget, good birds can easily be had in this state.  I have a lot of birding left to do in Colorado that will require more trips, but knowing I wouldn’t have much time on this trip, I took a precision approach.  I would focus on just one bird–a very common and very conspicuous bird I had never seen: the Bullock’s Oriole.  It was very doable.

My brother, Jason, and I flew into Denver together and spent Friday night there.  The next morning we would be joining my cousin, Karin, for the three-hour drive down to Westcliffe.  With the help of eBird, I found Sondermann Park which was convenient stop in Colorado Springs just two blocks off I-25 at exit 144 where several Bullock’s Orioles had recently been reported.  With trails that were short and right by the parking area, I convinced Karin and Jason that this would be a good stretch break.

Western birds were readily apparent with a Spotted Towhee being the first bird we saw/heard. 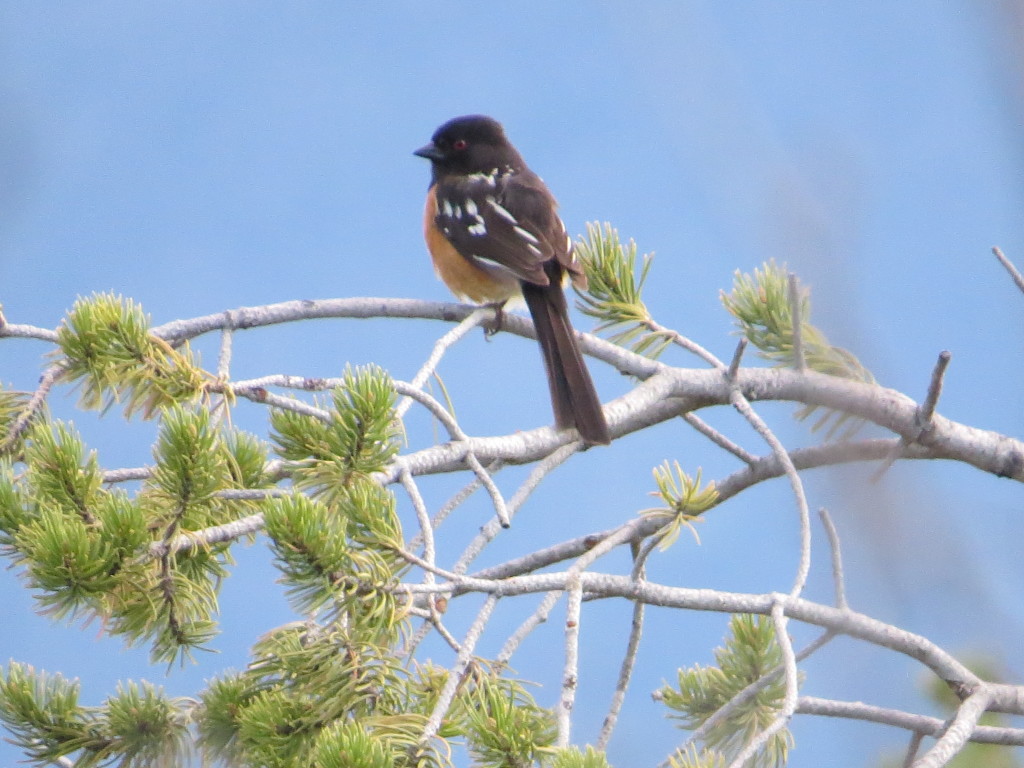 I was practically racing along the paths looking for my Oriole since we were short on time.  In the meantime, it was fun to run into several Western Tanagers. I promise there’s one in this photo. 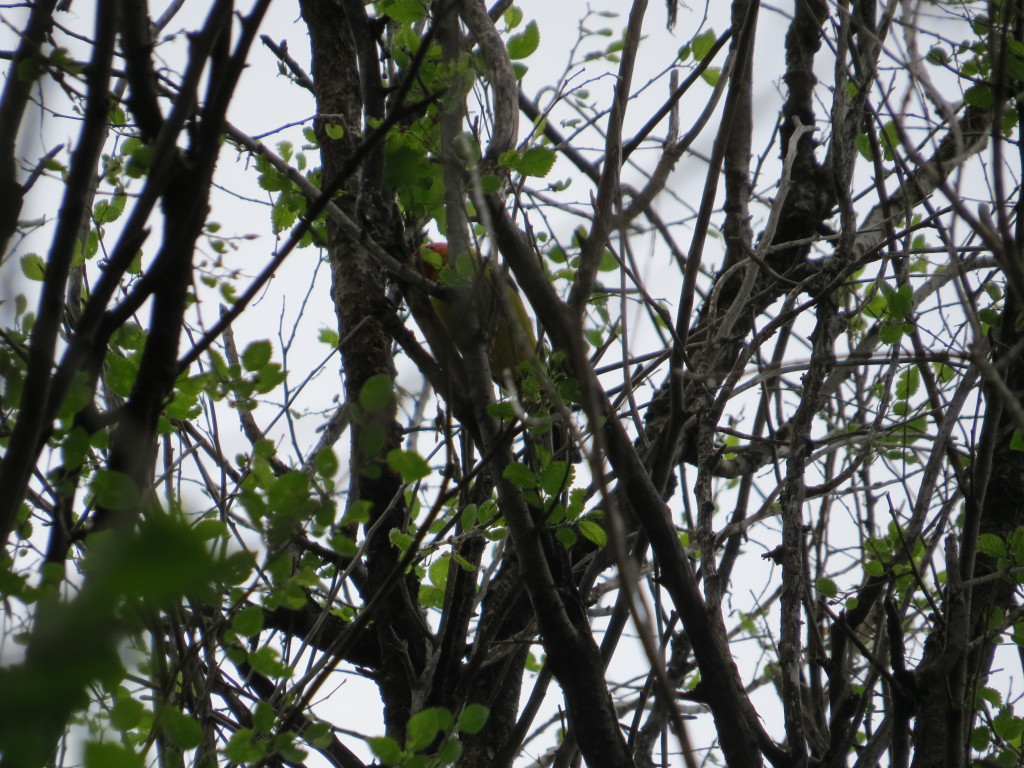 I did have better looks later on at some other WETAs, but I did something I don’t normally do–I enjoyed them through binoculars only.  Other birds adding to the western flavor were a couple of Western Wood Pewees and a lone Bushtit.  Eventually, though, I finally heard the familiar ratcheting call of a Bullock’s Oriole which sounds nearly identical to our Baltimore Oriole back home.  The Bullock’s and Baltimore were once considered a single species known as the Northern Oriole.  Genetic studies caused the species to be split into two in the 1990s.  Despite hearing the bird, I either saw it in bad light or briefly as an orange streak in good light.  Very unsatisfying, but a life bird nonetheless.  We had to get back on the highway, though, so better looks would have to wait until some future date.

What did give great looks were some appropriately named Violet-green Swallows at our hotel in Westcliffe. 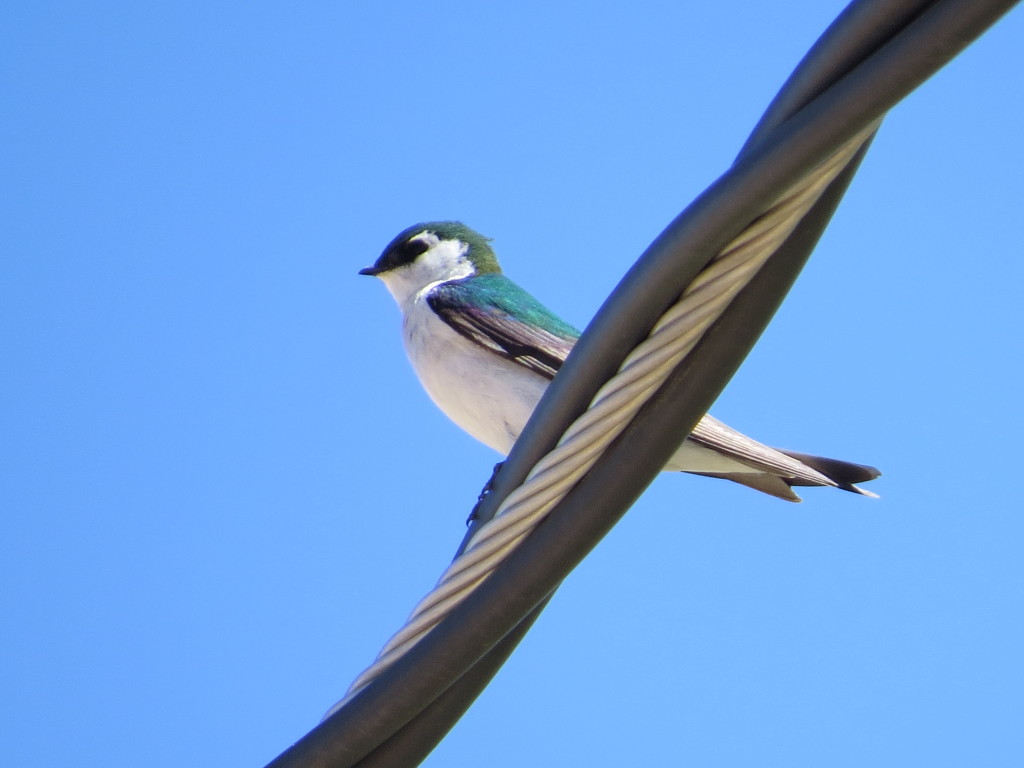 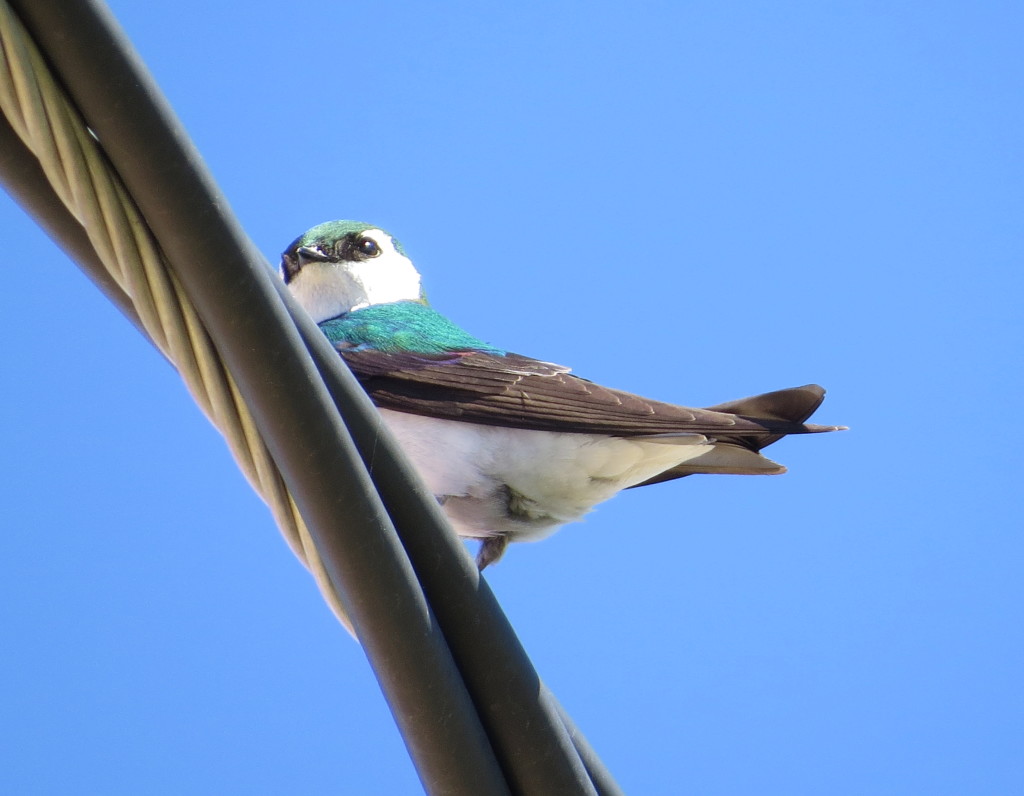 The trip was quite a whirlwind as Aunt Carol’s memorial service and a memorable family/friend gathering back at her house filled out the rest of the day.  Before I knew it, it was time to wake up and hit the road back to Denver.  I woke before my two traveling companions to see what birds might be around the hotel and to enjoy the refreshing morning. 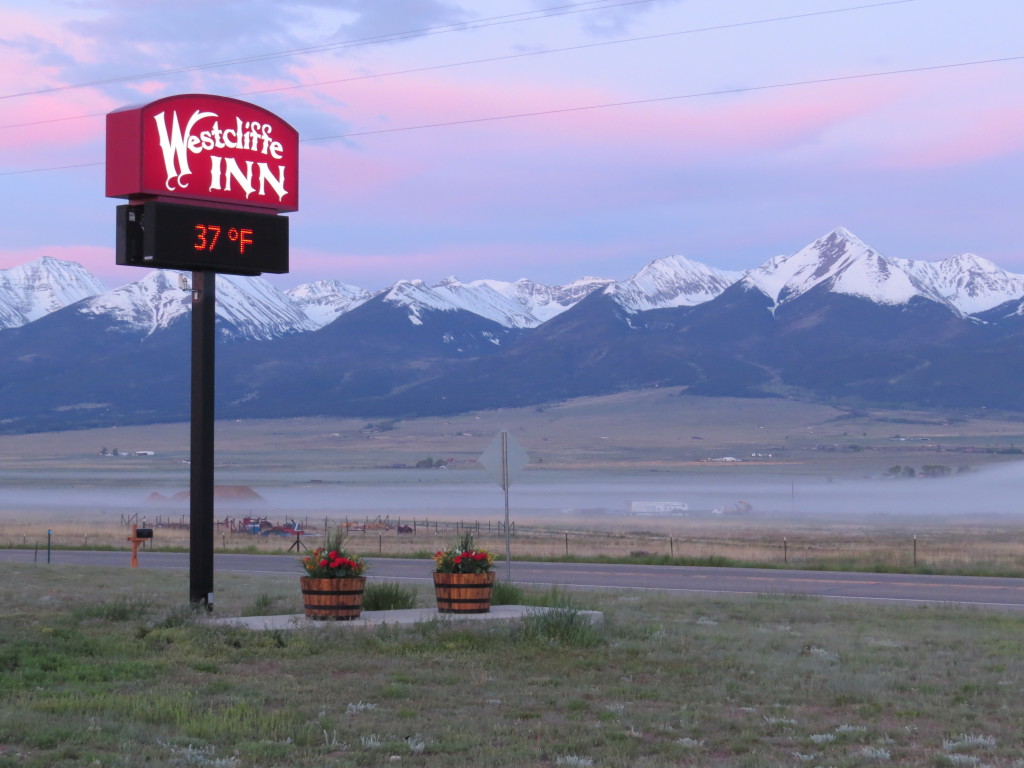 Birds or no birds, the Sangre de Cristo Mountains at sunrise are pretty spectacular. 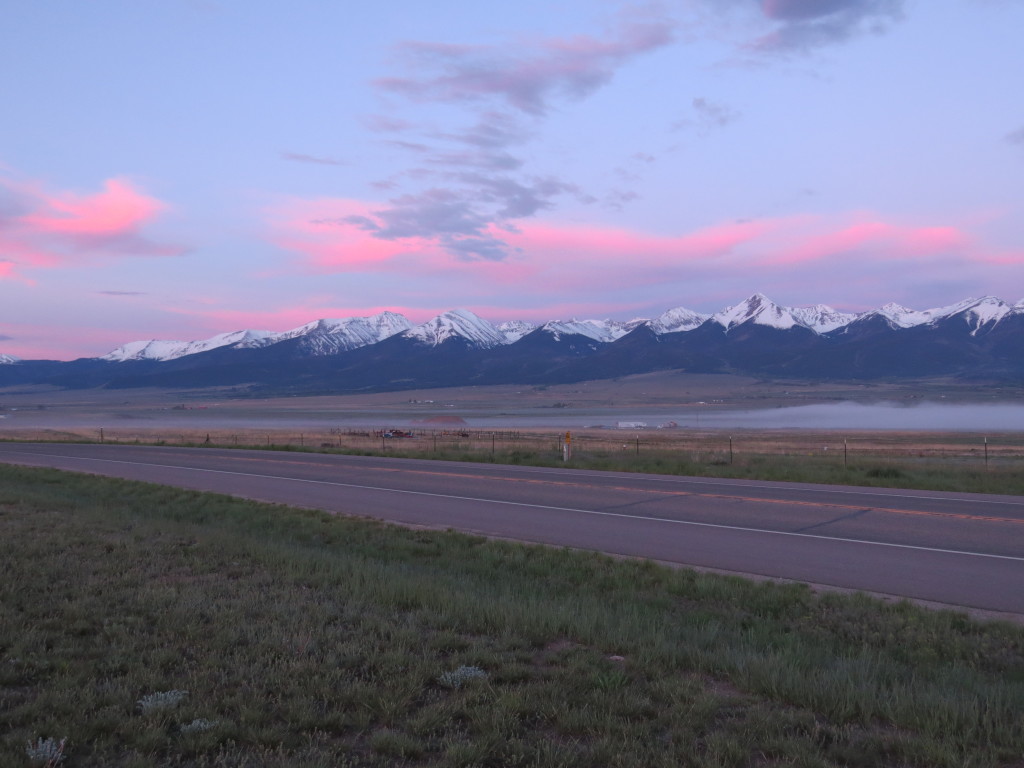 I did see one last pair of Mountain Bluebirds.  Fitting. 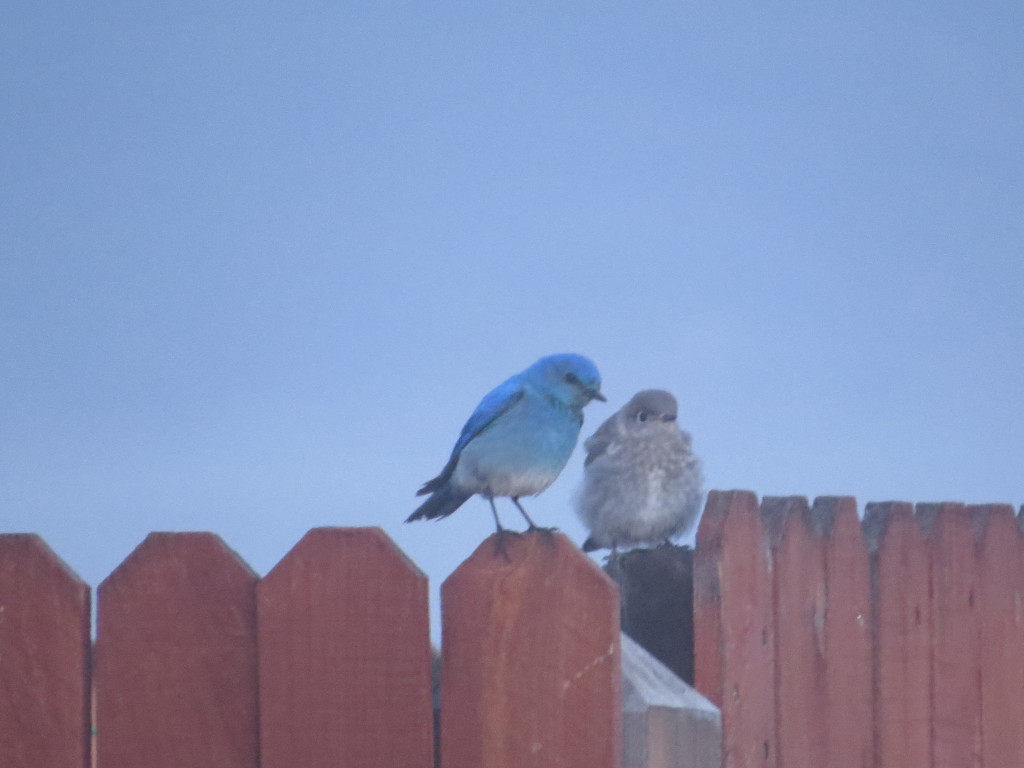 A short walk in the neighborhood gave me my second, equally unsatisfying, lifer of the trip. In the dim morning light I glassed a bird with a white chin, rufous cap, and long tail.  It was a Green-tailed Towhee.  I was also surprised to find a White-crowned Sparrow; I didn’t know they were summer residents here.

Shortly thereafter, Karin, Jason, and I hit the road.  As we were coming through the Hardscrabble Pass of the Wet Mountains, Jason slammed on the brakes startling us all.  There was a flock of sheep on the road.  Wait, those sheep had some big, curled horns–Big Horn Sheep!! 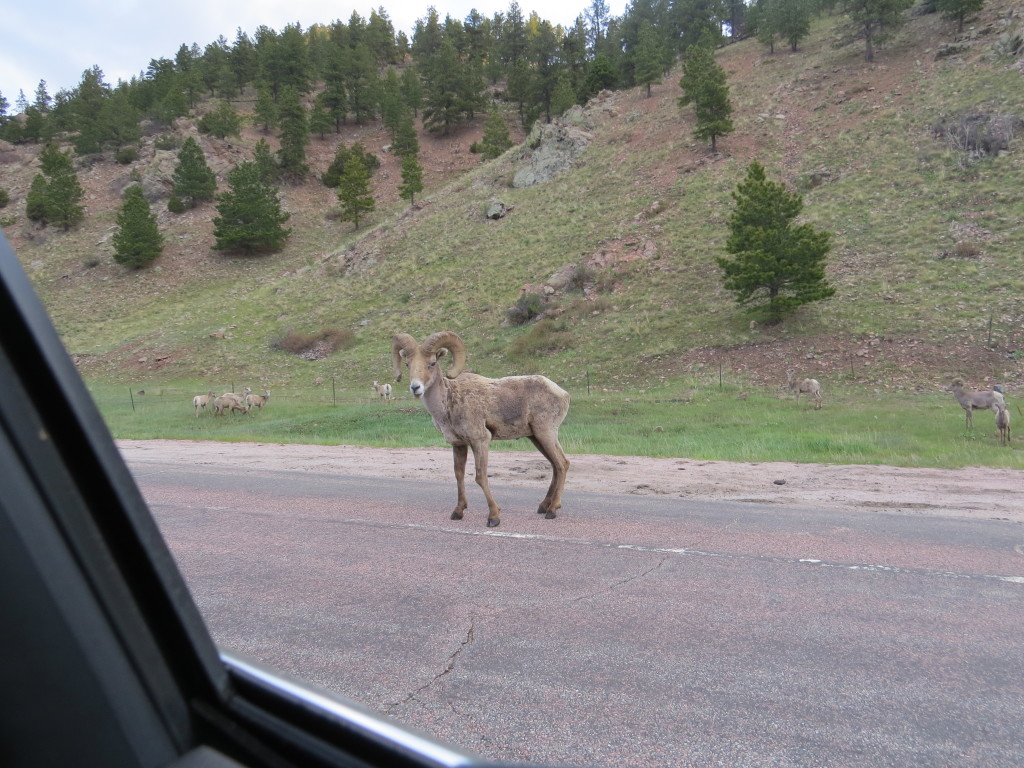 In all, there were 11 of them.  I was surprised at how little they were.  I suppose, though, they look much bigger when they are up on a mountain cliff. 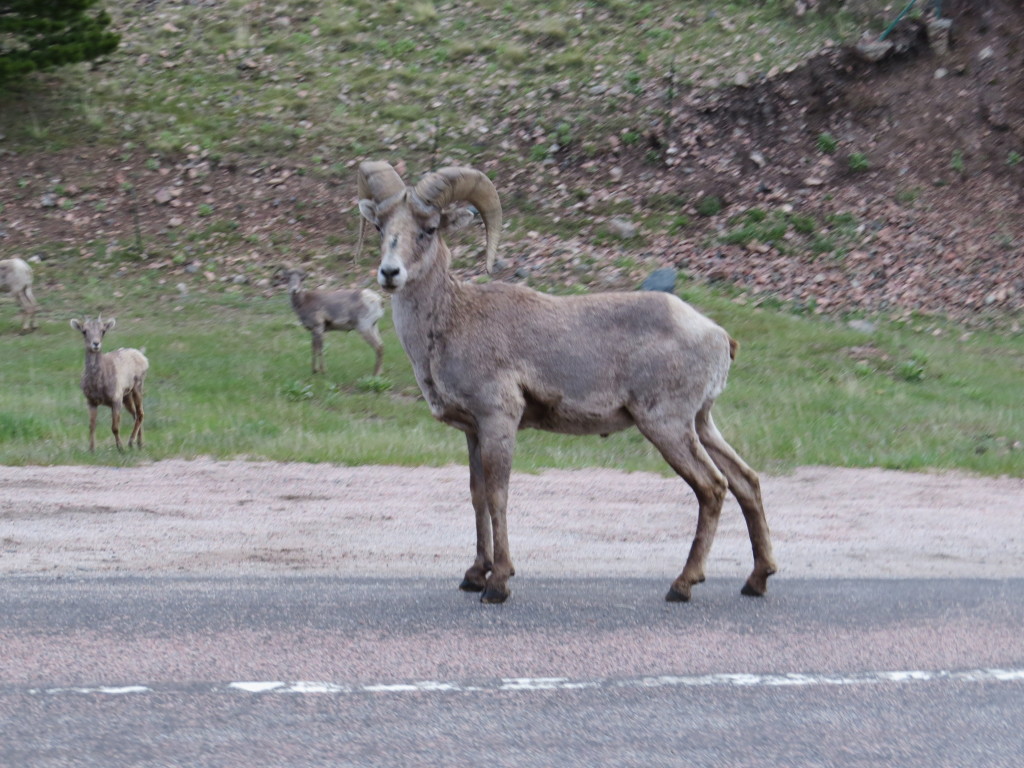 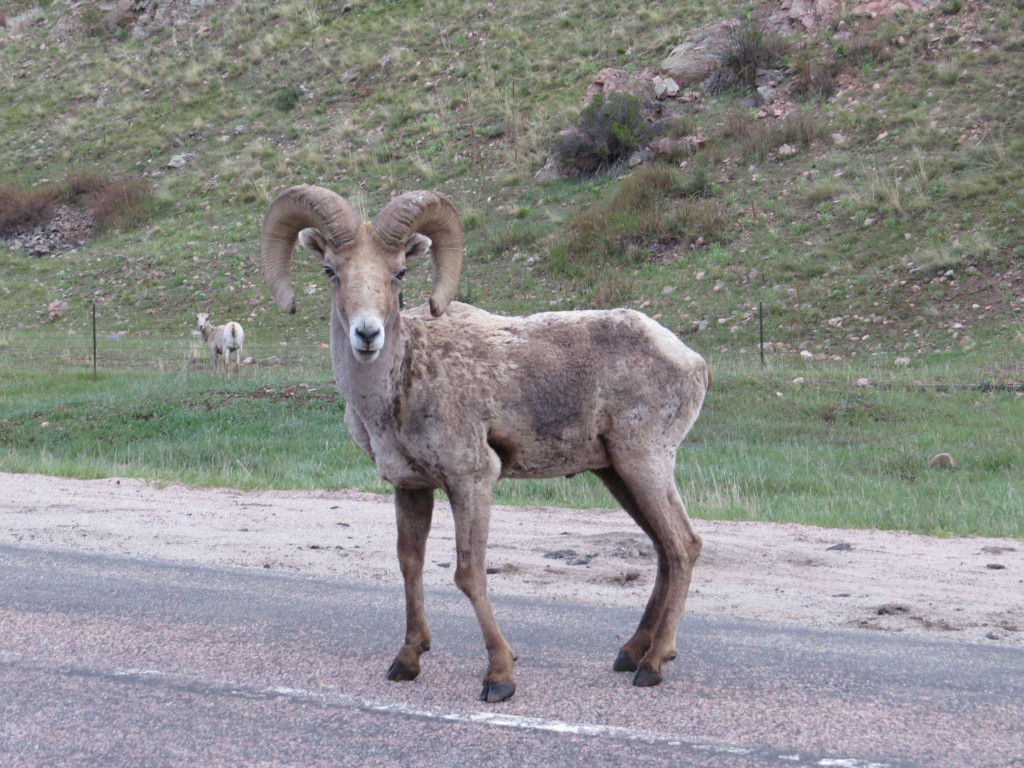 This was a very fun encounter once our hearts stopped racing.  We completed the grand slam of big game mammals on our drive by also seeing a buck Pronghorn, three cow Elk, and a couple of Mule Deer.

Once we got Karin to the airport, Jason and I had an hour-and-a-half to kill before we had to be at the airport ourselves.  Guess what is right next door to Denver International Airport? Rocky Mountain Arsenal National Wildlife Refuge!  It is a massive area and the perfect place to kill an hour.  Stopping in at the visitor’s center, I saw Say’s Phoebes and Western Kingbirds and learned the best place to find Bullock’s Orioles in a short time frame.  Additionally, the docent told us about a secret exit from the Refuge for getting back to the airport quickly.  If you want to do some birding before your flight and are crunched for time like we were, stop in the visitors’ center and ask about this exit.

Jason and I went straight for the tree-lined 7th Ave.  Most people head this way to see the resident Buffalo herd.  That’s old hat for us.  I was after a small, orange bird.  As I scanned the Cottonwoods lining the road while we cruised, Black-billed Magpies could be seen periodically.  We had seen quite a few on the trip, especially coming through Colorado Springs.  The ones at Rocky Mountain Arsenal are skilled at doing Common Nighthawk impressions. 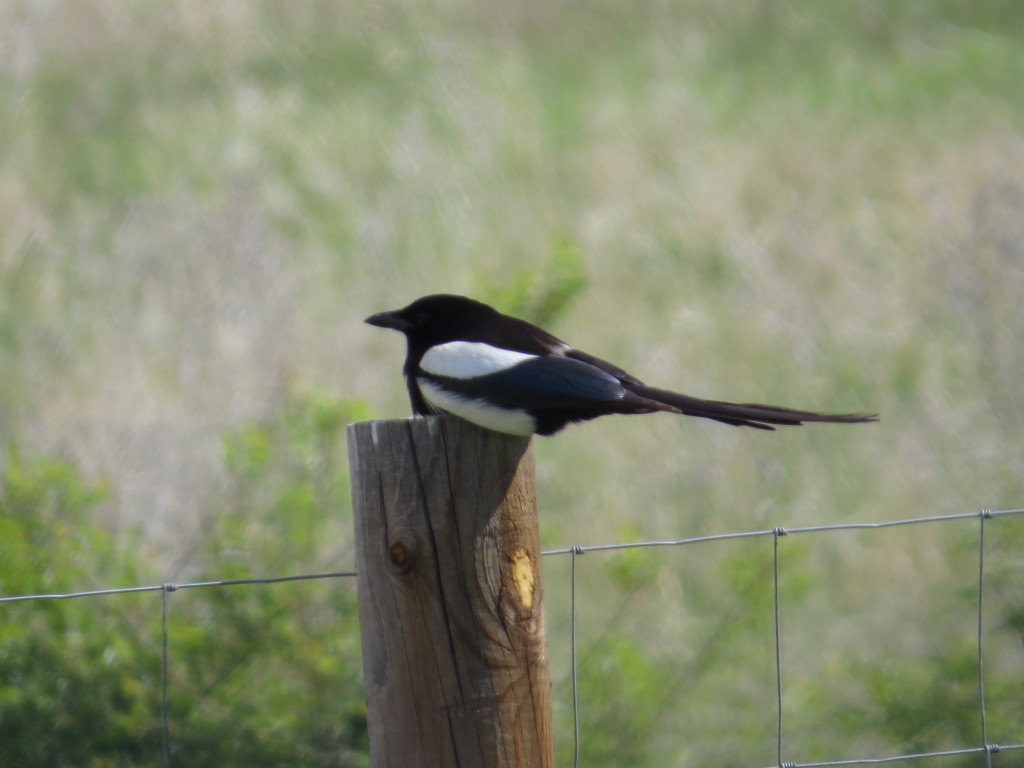 In no time I spotted the orange bird I was after and redeemed my initial sighting of the Bullock’s Oriole the day before. Success. 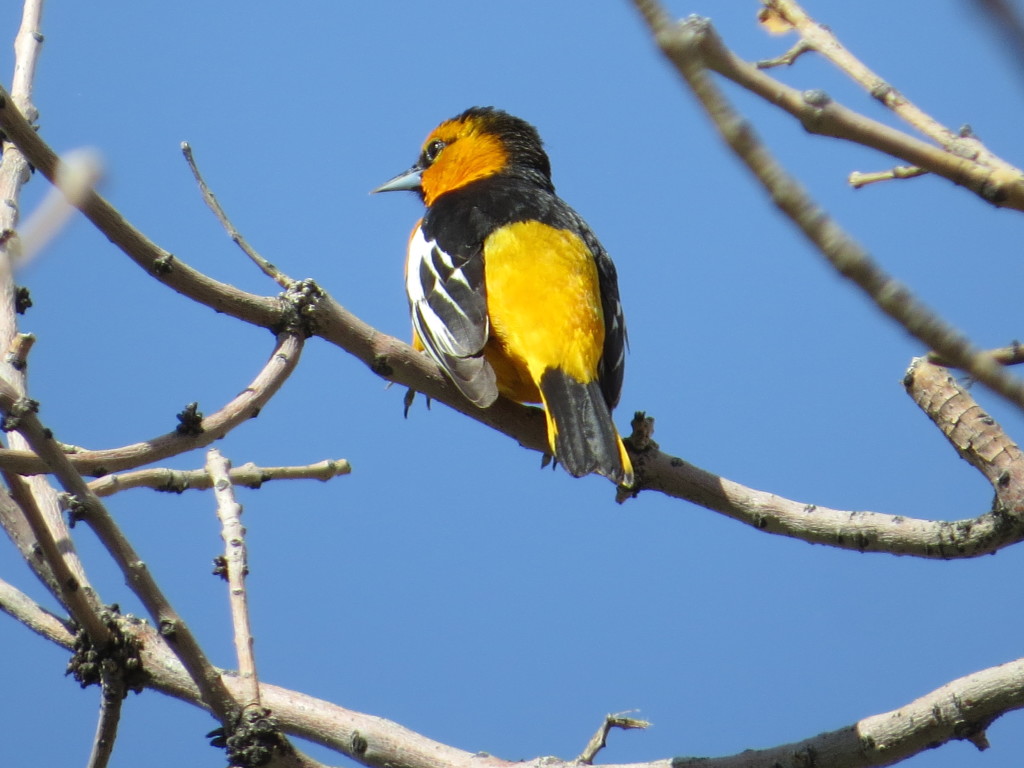 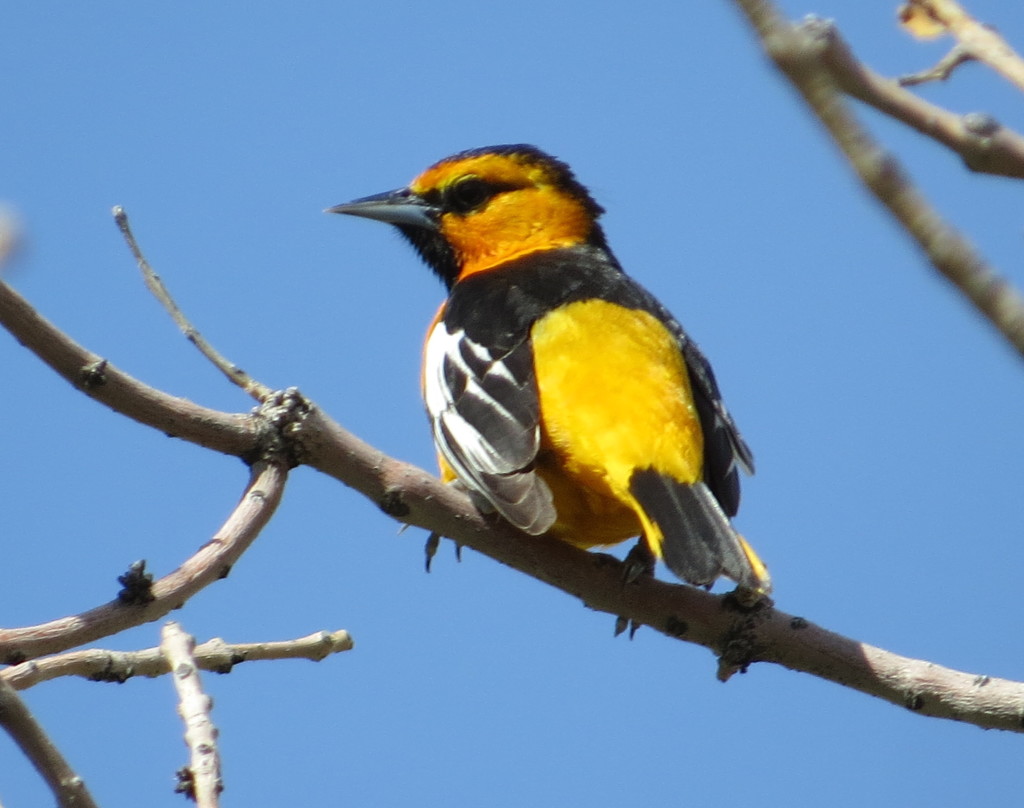 After a little bit more exploring, Jason and I took the secret exit out of the Refuge.  And there on the exit road was a sad, symbolic reminder of the reason for our trip: a drake Mallard was standing vigil over his freshly killed mate.  I’ve never seen anything like it.

You will always be in our hearts, Aunt Carol. We will miss you!